Somewhere in among designing his latest range of gorgeous Christmas ornaments, Chris McVeigh managed to find the time to crack open THE LEGO® BATMAN MOVIE 70922 The Joker Manor for us and, having assembled its 3444 pieces, dissected it again to locate all the exciting new and recoloured LEGO elements - including its completely new rollercoaster system! The set is now available priced £249.99 / US$269.99 / 269.99€.

The Joker Manor is a sprawling set that imagines Wayne Manor has been overtaken and aggressively remodelled by the Joker (as seen in THE LEGO® BATMAN MOVIE). It’s a brilliant display piece with a glitzy, colourful entrance, oversized spring-loaded boxing gloves, a garish, glaring tower, and naturally, giant “The Joker” branding. However, the real showstopper is the rollercoaster that encircles the manor. With this set LEGO introduces an all-new car and track system that is sure to appear in many upcoming product lines, from City to Creator Expert. 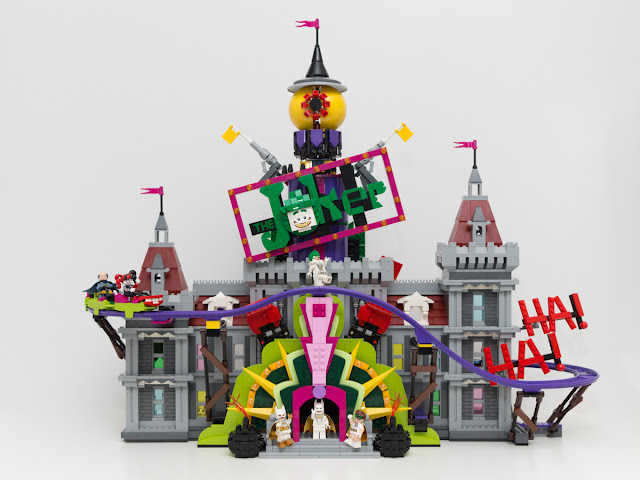 In this article I’ll closely examine the new rollercoaster elements, highlight other new parts, and discuss interesting recolours and reissues.

The Joker Manor’s roller coaster track consists of five new elements in Medium Lilac [TLG]/Dark Purple [BL]. There are two of each straight track element and four of the corner track elements, for a total of 12. 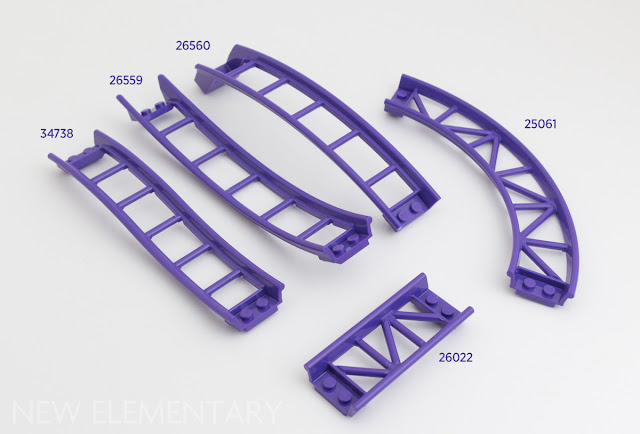 PLEASE NOTE: LEGO has not yet published the inventory for 70922 The Joker Manor, so we do not know the proper names for the new elements.

"Any compatible clip can be attached to the track rails... the consistency of design is wonderful"
Track elements attach to other elements via a plate segment at either end of the track. These 1x2 segments drop below the track but have been designed with enough height to clear neighbouring studs.

Once positioned, the connection between track elements is secured at the top with a 2x2 Flat Tile. 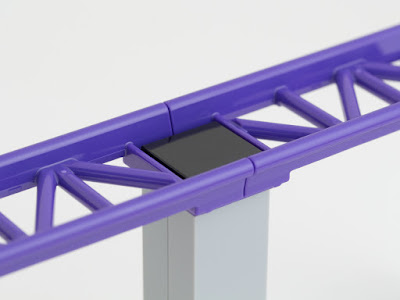 At their midpoint, the rails on the track elements are exactly three bricks apart. They have the same thickness as a standard 3.18mm bar/shaft, but because they’re angled outward, it’s impossible to attach two parallel clips.

Otherwise, any compatible clip/holder can be attached to the track rails. Naturally, there are limited applications for building directly on the rails as it will bring the coaster to an immediate stop (perhaps a dead end for a mine cart?), but the consistency of design is wonderful.

That consistency extends to the struts/framework between the rails of each track element, too. They’re also the same thickness as a bar/shaft, and this can be considerably more useful in terms of both support and aesthetics. The Joker Manor uses number of solutions to support the track, but it’s clear that it can also be supported with bar and clip structures if necessary. 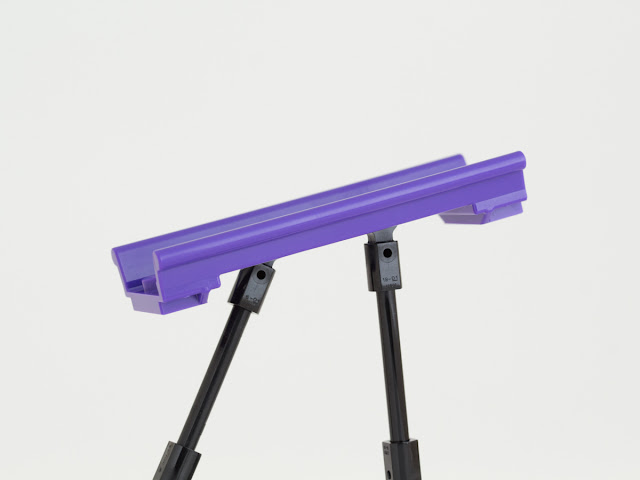 Additionally, it’s possible to hang items from a track element to add character to the environments; for example, a plant element or bat. (One caveat: the coaster car has a drop down pin that may collide with items that are clipped to the centre of the track. But more on that later!) 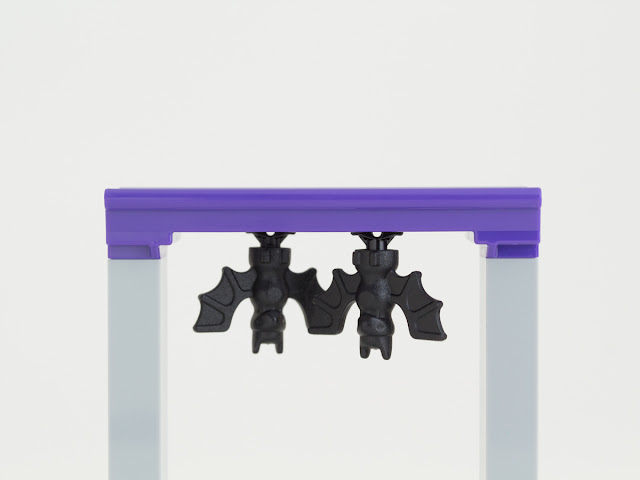 Interestingly, the steep drop track elements must be paired together. Unlike the other track parts, the connection between these two elements is angled rather than flat. This makes it impossible to have a steep drop of just 6 bricks in height; instead, the drop must be a full 12 bricks and a length of 32 bricks. Of course, a future set may introduce new options for steep drops, hopefully including a curved, descending track element. 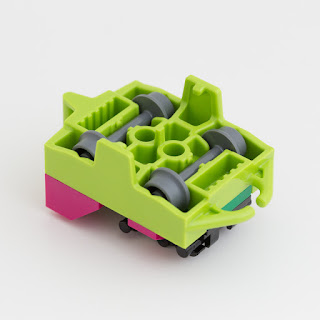 The car element is four bricks wide and five bricks long, with a core height of about one brick (three plates). Two large tabs extend downwards on either side of the car to keep it aligned with the track, while a third narrower pin protrudes below the middle of the car. It’s been speculated that this mysterious pin is compatible with Technic Link Chains, making it possible to motorize the rollercoaster. (Elspeth tested this theory for The Brothers Brick with intriguing results!)

Once built, each car seats a single minifigure. Cars connect to each other through a loose but secure hook and clasp system that lets the cars jostle about independently without compromising each other’s forward momentum. I was worried that the tabs on either side of the car would mean the car had to be firmly snapped to the track (and therefore be difficult to remove), but happily, that’s not the case. Ridges on the inner side of each tab provide minimal resistance. As you place the car on the track, one of the tabs will slip below the rail and tilt the car slightly; a gentle nudge will then drop the car into place.

Time for a test run! The rollercoaster reaches its apex just above the main entrance to the manor, making it the ideal starting point. I found that if I just let go of the rollercoaster, it would not gain enough momentum to make around the first corner and down the slope. However, with the slightest use of force, it sailed around the corner, down the hill, up the next incline and around the bend at the other side of the manor. The rollercoaster performs well, and perhaps more importantly, it’s a lot of fun. You’ll be hard-pressed not to smile as you watch your minifigures whip around the track!

The Joker Manor’s most unusual new part is the wiggly wall element, an undulating panel that appears to have been designed specifically for use as a fairground funhouse mirror. 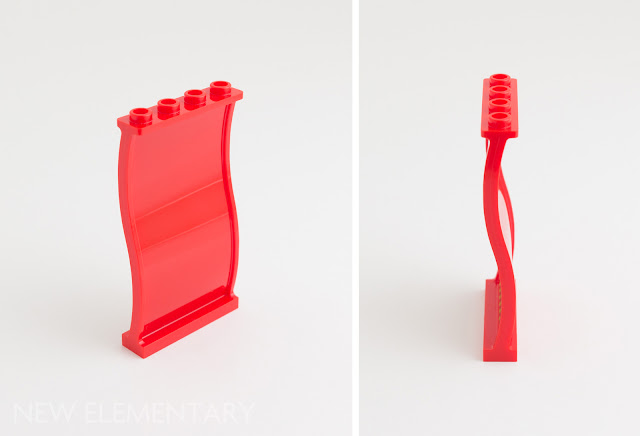 It’s hard to imagine many alternate uses for it (especially in Bright Red [TLG] / Red [BL]), but to the element’s credit, the undulation goes edge to edge rather than being nested inside a traditional door frame. If it’s made available in grey, it could certainly find a home in the long corridors of a space ship.

The biggest surprise in this set is the inclusion of a double-wide inverted bow in Medium Stone Grey [TLG] / Light Bluish Grey [BL]. 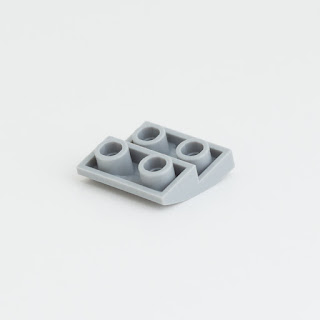 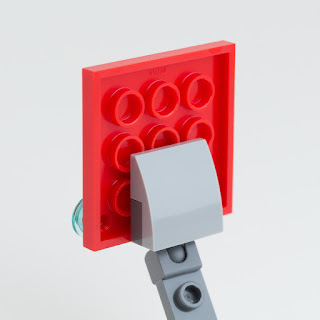 There’s only one, and it’s used rather unremarkably to clamp a towball plate to the back of a larger plate (a ‘BAM!’ sign at the back of the manor). This helps prevent the elements from coming apart as the sign is positioned, while providing a cleaner profile than other solutions. Given that 1x2 inverted bows are often used in pairs in this manner, a 2x2 iteration makes sense. And decoratively, these new elements can help minimize visible seams. (Consider that the underside of 21306 The Beatles Yellow Submarine uses a whopping 28X 1x2 inverted bows!)

As with any large set, The Joker Manor includes a fair number of existing parts in new colours. It also brings back a handful of parts in colours that haven’t been in production for some time. 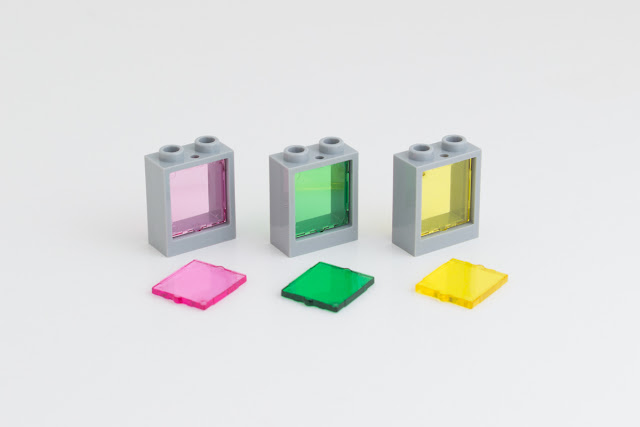 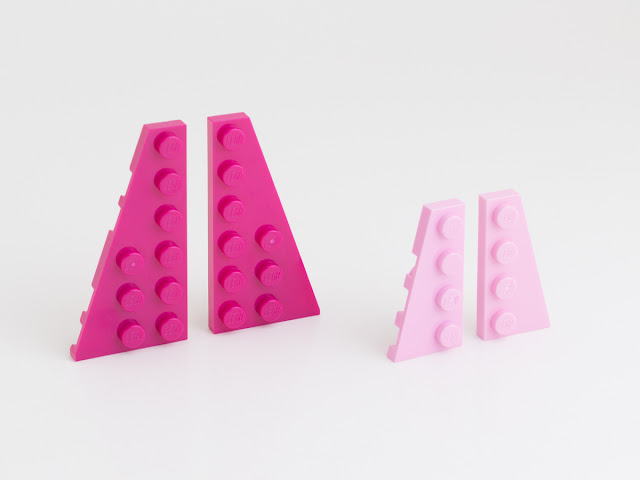 These are Tiling Times 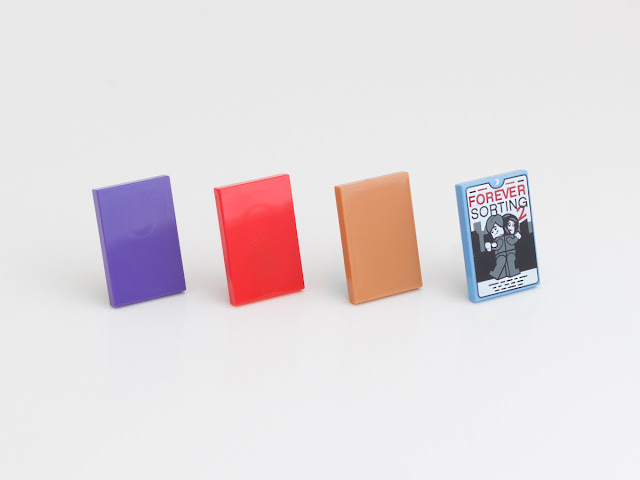 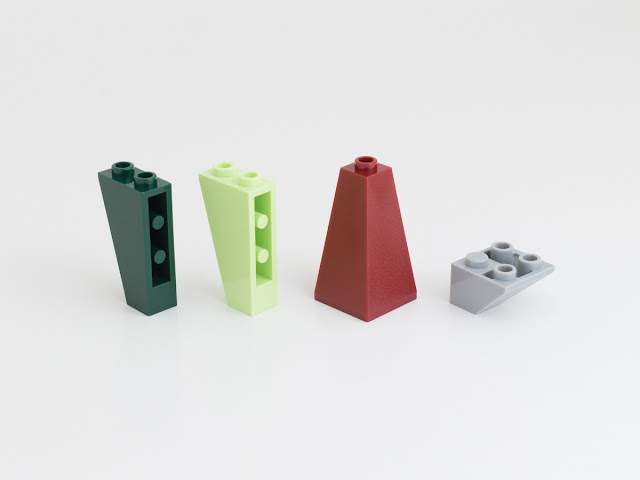 A number of newly recoloured and returning slopes/roof tiles are worth noting. Wayne Manor’s left and right towers have identical rooftops that contain a total of 16X 2x2x3 corner slopes, new in Dark Red (6210808 | 3685). The castle-like battlements of the manor include 12X inverted corner slopes in Medium Stone Grey (6210800 | 3676), which have not been offered since 2002’s 10030 UCS Imperial Star Destroyer. Additionally, the flashy entryway serves up a recolour and a reissue of the 1x2x3 inverted slope (Design ID 2449). There’s Spring Yellowish Green [TLG] / Yellowish Green [BL] (6211718) which is entirely new, and Earth Green [TLG] / Dark Green [BL] (6210797) which is a reissue with a new Element ID. The part hasn’t been available in Earth Green since 2011’s 7930 Bounty Hunter Assault Gunship. 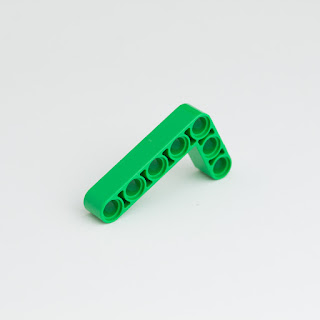 Not pictured here, the manor also supports the rollercoaster in two places with Double-Angular Beams/Liftarms in Medium Lilac [TLG] / Dark Purple [BL] (6192129 | 32009), which have otherwise appeared only in 2017’s 42069 Extreme Adventure. 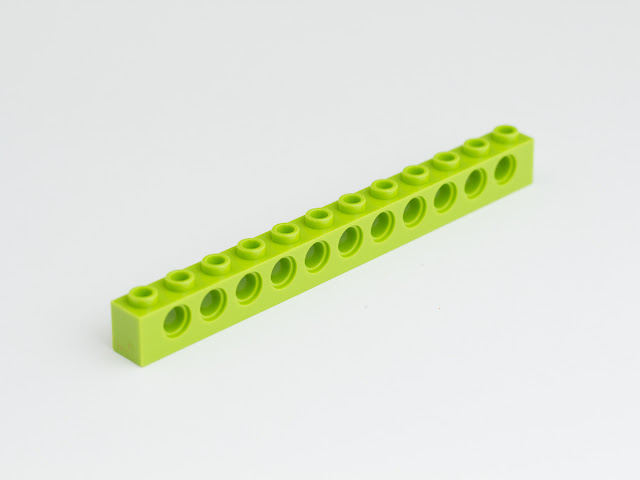 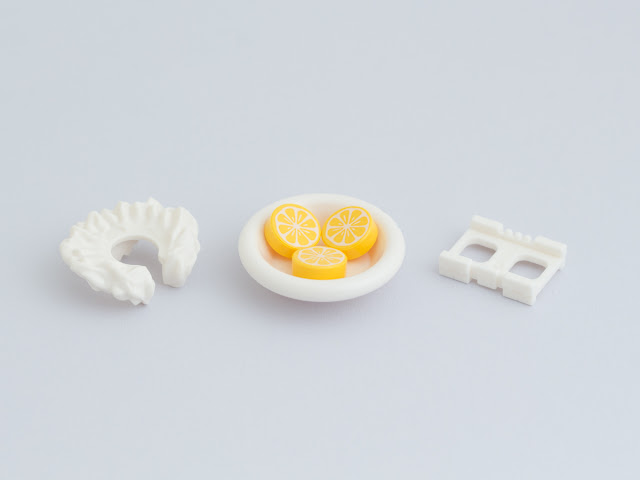 A set this size naturally includes new minifigure elements; for example, Batgirl’s cowl in white the Batman/Robin hybrid cowl worn by Dick Grayson. While these are wonderful in their own right, accessories that are not strictly locked to the franchise are much more interesting. The utility belt now comes in White (6212331 | 27145), as does Kraven’s furry collar piece (6211708 | 26066). The Joker Manor also introduces a fun new minifig-scale food element: the Lemon Slice (6213352), a new 1x1 round tile in Bright Yellow [TLG] / Yellow [BL] that features a cross-sectional citrus print. There are three in the set, and I expect we’ll see them appearing in other sets very soon.

Notably reissued with this set is the standard minifig dish in White (6170936 | 6256). Although a printed variant appears in the The LEGO Batman Movie Collectible Minifigure Series, a plain white minifig dish has not been served in sets since 2002.

It’s difficult to cover all the set’s new elements in a single article, but there are still some that bear mentioning before I close.

Just below that, two new 1x1x2/3 bricks with front-facing studs in Bright Yellowish Green (6210416 | 32952) allow side-mounting of parts in the entryway. (Interesting to see this part released in yet another bright colour before appearing in a neutral!) And flanking the main entrance are six new 2x8 spikes in Bright Yellow (6211778 | 61406), cleverly positioned to resemble a starburst. 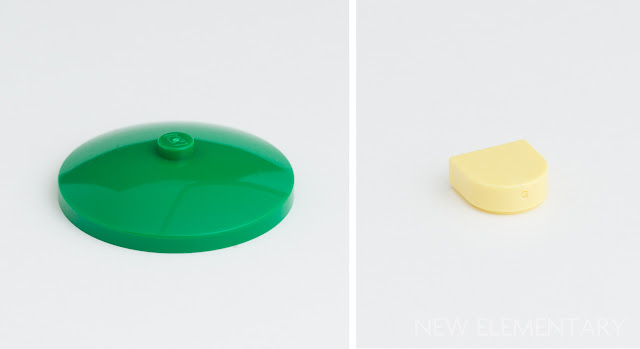 
End of the Line

The Joker Manor is a sprawling set that’s fun to build, even more fun to play, and looks fantastic on a shelf. Although it will stand out as the first set to include the new car and track system, it’s also chockfull of recolours and returning elements that make it a worthwhile investment. And that’s no joke!

Products mentioned in this post were kindly supplied by the LEGO® Group. All content represents the opinions of New Elementary authors and not the LEGO Group.
Posted by: Admin Posted on 11/26/2017 07:16:00 am
Email ThisBlogThis!Share to TwitterShare to FacebookShare to Pinterest
Labels: LEGO Movies, Set review