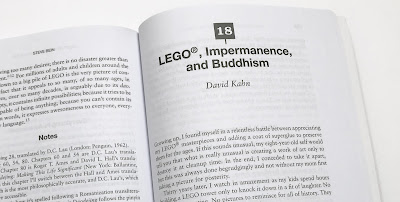 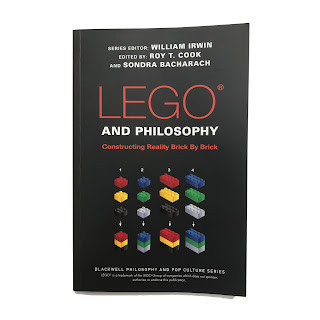 This same optimistic spirit runs through the selection of essays gathered together in Roy Cook and Sondra Bacharach’s newly edited book LEGO and Philosophy: Constructing Reality Brick by Brick. The twenty-one studies that make up the collection are written by a host of new and established academics from some of North America and Europe’s best universities. Broadly themed around the topics of creativity, ethics and rules, identity, consumption and culture, and metaphysics and maths, the aim is to cover a wide intellectual base, in an attempt to answer the question posed by Cook and Bacharach in their introduction: ‘how deep and profound could a little plastic building block be?’, and like Cook and Bacharach these essays resoundingly reply: ‘the answer is “very”!’

As a part of the Blackwell Philosophy and Pop Culture Series the book adheres to a no-nonsense editorial style that favours legibility and accessibility; a rare thing in a field such as philosophy, which often excludes the casual reader. Each of the studies here allows the philosophically uninitiated to dive into the arguments presented by their authors. Ideas are clearly explained and interesting observations succinctly and expertly arrived at. Whilst still very much situating themselves in, and adding to, a wide range of academic studies, from the psychology of play to the analysis of popular culture, there is a place in each of these essays for the LEGO enthusiast to learn more about what, why and how their love of the brick operates. 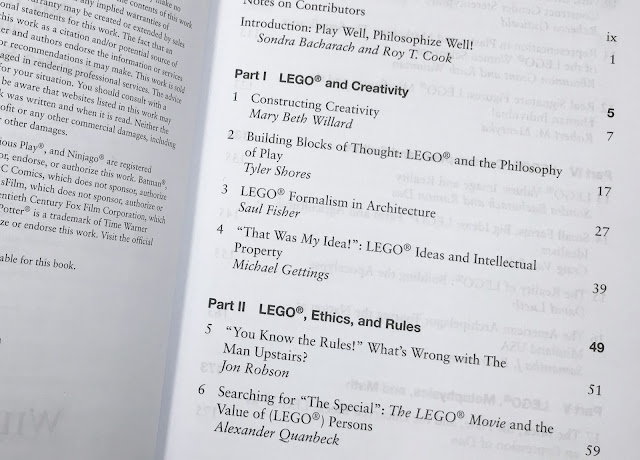 From the opening essay, Mary Beth Willard’s ‘Constructing Creativity’ there is a sense that LEGO building improves and aids human experience by developing our potential to play and create. Ward’s argument explicitly breaking down the myth that LEGO as a toy is good because it is creative, suggesting instead that it is the simplicity and effectiveness of the system that encourages creativity to develop, moving those who use it quickly and happily onto a path towards virtuosity. LEGO bricks, she argues, are a highly successful tool, able to harness our imaginative potential by helping each of us to practice, improve and even master that uniquely human faculty of creative expression.

Michael Gettings in his ‘LEGO Ideas and Intellectual Property’ from the same creativity section of the book takes a very different angle to these questions – fan expectation. From my own LEGO enthusiast’s perspective, and having read the online message boards for years, it is a marvellous experience to see the trained philosopher pull apart the pedants’ arguments that modifications to a LEGO Ideas project by the LEGO Group, so as to prepare it for market, qualify as a deceit or fundamental change of model. In amongst the arguments that debunk this opinion Gettings again shows us something special about the LEGO brick’s capacity to generate originality.

"The section ‘Emmet as Existentialist’ elicits a wry smile"

As a sometimes writer on the philosopher Martin Heidegger (I teach various literary and aesthetic theories at Goldsmiths, University of London) Ellen Miller’s ‘Building and Dwelling with Heidegger and LEGO Toys’, appealed to both the philosophy and LEGO nerd in me. The subsection entitled ‘Emmet as Existentialist’ eliciting a well deserved wry smile. Her concluding statement though provided genuine food thought, noting that: ‘Dwelling and building in worlds of LEGO toys is one way to sustain the awe and wonder needed for authentic building and philosophising.’ 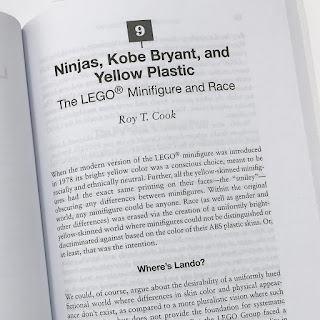 Roy Cook’s own contribution to the collection ‘Ninjas, Kobe Bryant and Yellow Plastic: The LEGO Minifigure and Race’ shifts the focus away from play, to consider the political and social potential of LEGO creations. By playing out the intended idealism of the racially non-identifiable era of yellow minifigures against the various flesh tones found in the post-franchise sets, Cook explores the illustrative capacity of the system of identify found in the LEGO minifigure. Rather than suggesting that an earlier idealistic world of undifferentiated yellow smiling faces was in some way morally reprehensible, he argues that the complications generated by the confrontation of this simple ideal with the racial complexity of current franchise sets provides a forum for important questions regarding racial identification, social context and prejudice to be better understood and potentially confronted.

If one of the essays here could sum up the tone of the book, Sondra Bacharach and Ramon Das’ ‘LEGO Values: Image and Reality’ might be the best case in point. Together they question whether the utopian and overtly positive social image the LEGO Group paints of itself is sustainable, via the well documented Greenpeace critical video made to highlight the company’s links to oil giant Shell. The answer comes back, that despite the problematic contradictions inherent in any multinational business operation, it remains too easy to malign the positive approaches made by the company and not hope that other toy manufacturers emulate the imperfect but aspirational approach that the LEGO group aspires to.

So whilst the LEGO Group and its products may not yet embody a utopian reality, in a world experiencing dark and troubled times, this book’s authors would seem to suggest that by playing, building and thinking with LEGO bricks we keep our utopian hopes alive. This book not only makes this point in numerous ways, it provides what all good research purports to do, it lays the foundations for future work. To name drop my own blog, it sets the stage for building future debates. If you have even the slightest inkling that something serious is going on in the LEGO world, something positive and potentially culturally transformative, then these collected essays provide no better starting place to start your own thinking about this.

If you're interested in buying LEGO and Philosophy: Constructing Reality Brick by Brick you can help support New Elementary by following these links to Amazon USA or UK: