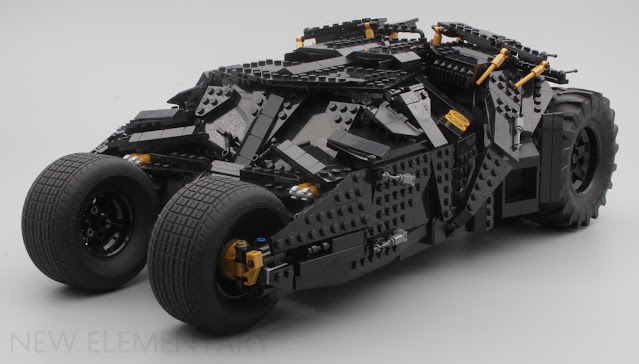 At the beginning of the 76240 building manual, creative lead Jesper C. Nielsen (who we interviewed earlier this year,) talks a bit about the differences between the first iteration of the Tumbler from 2014 and the newer version from 2021, and more particularly how the rear axle has been widened and how the front has been narrowed. What’s interesting to me is that he says that they tried to have front steering wheels, but that they gave up on the idea because it would have compromised the aesthetic of the model. I would be curious to see pictures of prototypes of the model with the feature implemented. And who knows, maybe they’ll be able to solve that problem in a few years, when parts that allow it will be available.

But let’s focus on the present, and the parts that are available right now in 76240 Batmobile Tumbler! 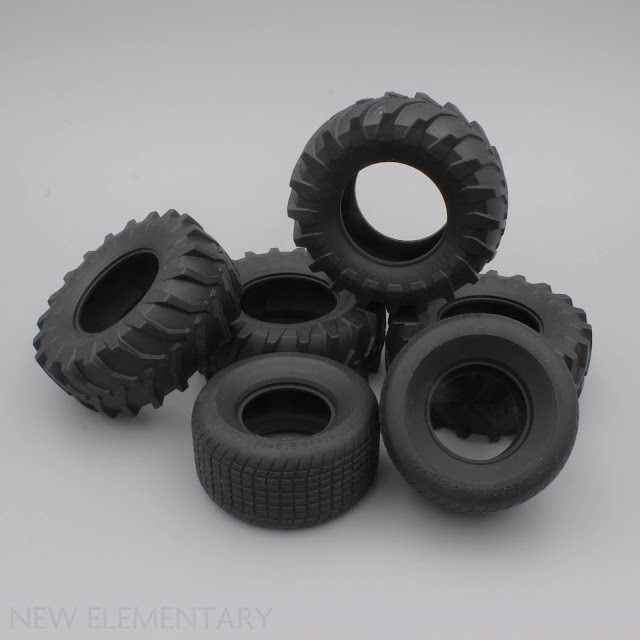 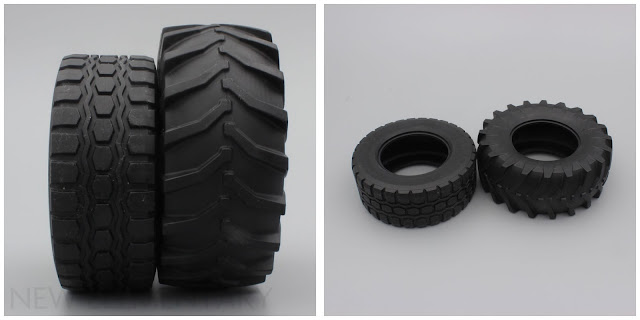 As you can see, the new tyres are quite a lot bigger than the previous version. This element was included in six other sets before. 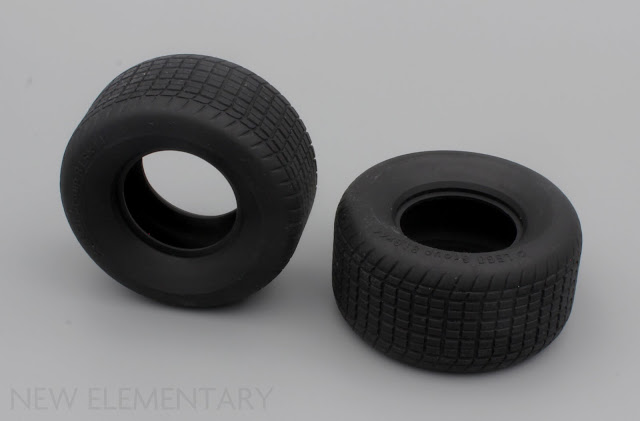 The front tyres aren’t the only noteworthy parts from the previous Tumbler that return. Two Wedge 2 x 16 Triple in Black (6369843 | 30382) are present in the set. These elements were last seen in 2014 and appeared in four other sets before. 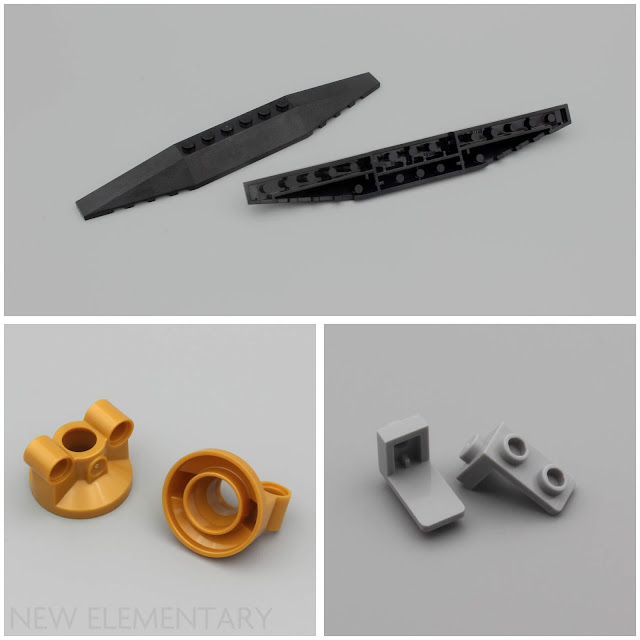 Also used in the front are two Medium Stone Grey/ Light Bluish Gray brackets 1x1-1x2 6362975 | 79389). Obviously they were not found in the older Tumbler, but as they are recent pieces and are still relatively rare, I thought they were worth a mention. It would have been nice to have them in black, but it’s not really a big deal.

Some control panels inside the vehicle are stickered, but the decorated elements that are visible from the outside are printed. 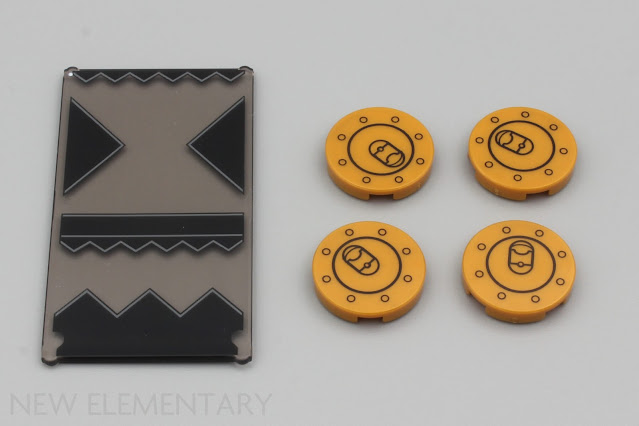 People who have built the 2014 Tumbler will probably not be surprised by the building process, as both models are very similar. Let's take a quick visual tour through the build. 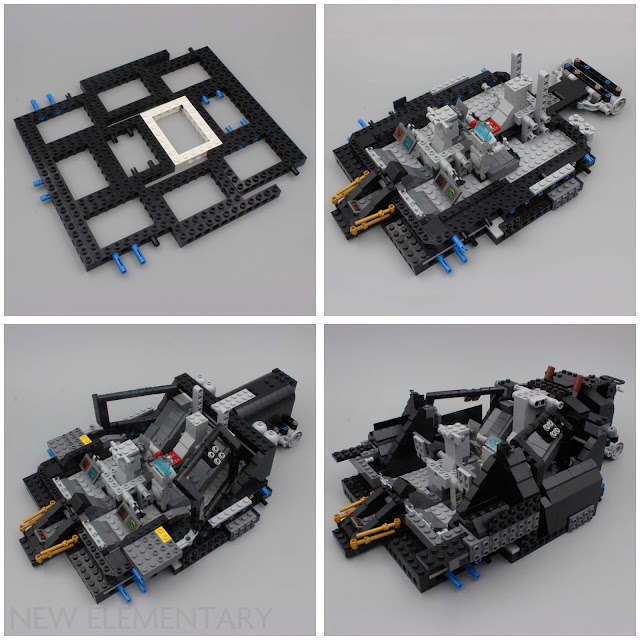 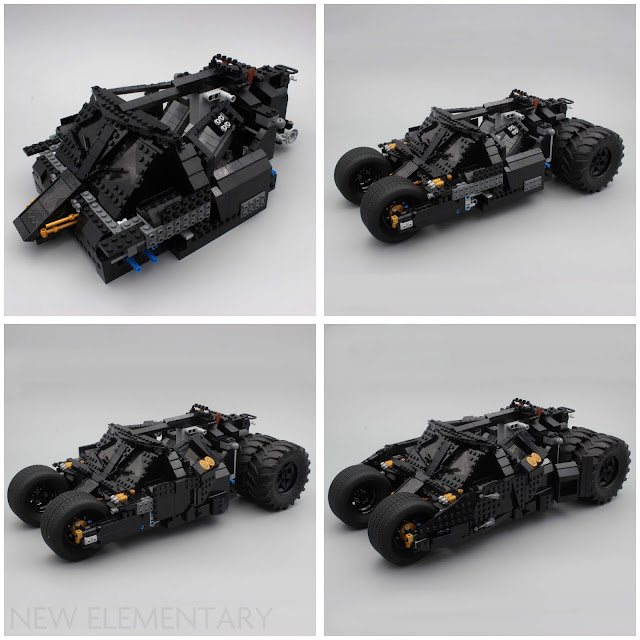 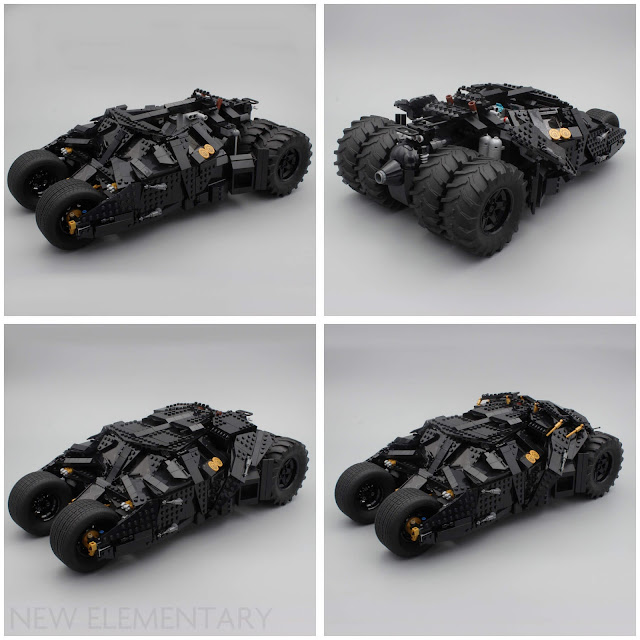 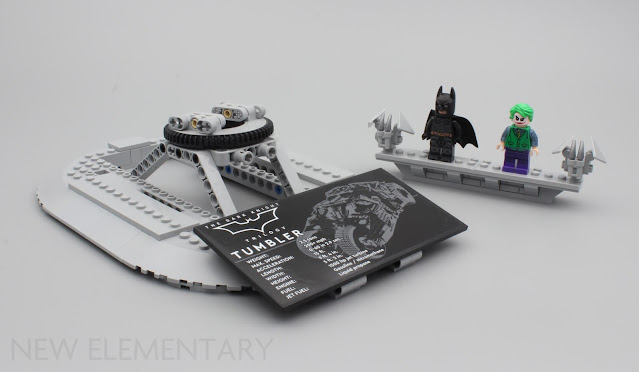 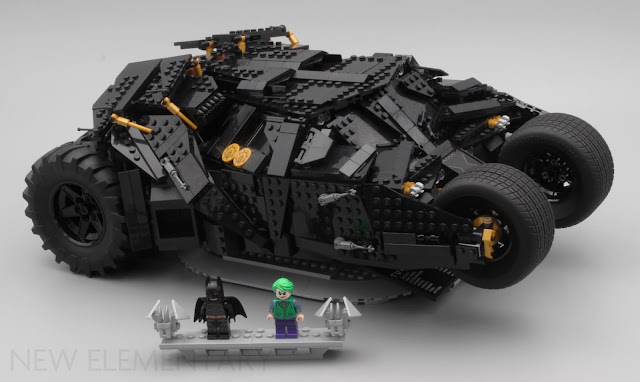 Besides the Tumbler itself, the main difference is the addition here of a display stand for the vehicle. However, as you can see, when the Tumbler is placed according to the instructions, the “UCS plaque” is hardly visible, and due to the Technic turntable being slightly angled, only the rear wheels touch the ground, which I find quite awkward. 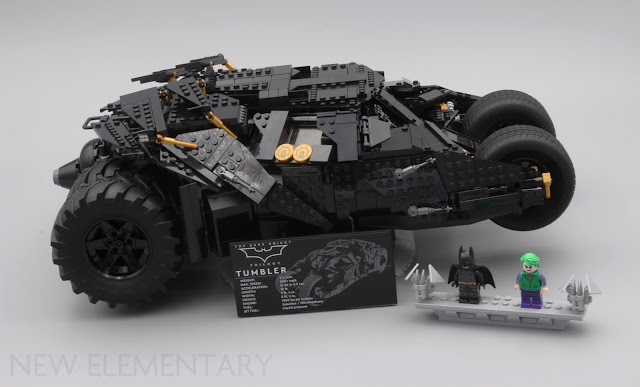 You can rotate the Tumbler and raise the plaque so it’s more visible, but then only one wheel touches the ground, which is worse. So, to be honest, I really don’t understand what the designers tried to achieve with that display stand. The style of the Tumbler and the minifigs’ display stands are similar to those of the 1989 Batmobile and Batwing, so I guess it has been added to give a sense of unity to the “UCS” DC / Batman line.

The set comes with two minifigures that can be displayed on a cornice-shaped stand adorned with gargoyles, just like 76139 and 76161, which raises a question: why? That kind of stand might have worked for the more Gothic atmosphere of Tim Burton’s movies, but looks completely out of place when it comes to Christopher Nolan’s universe. I would have preferred something more sober, like the display stand of 76023, or, maybe shaped like the bat-symbol. 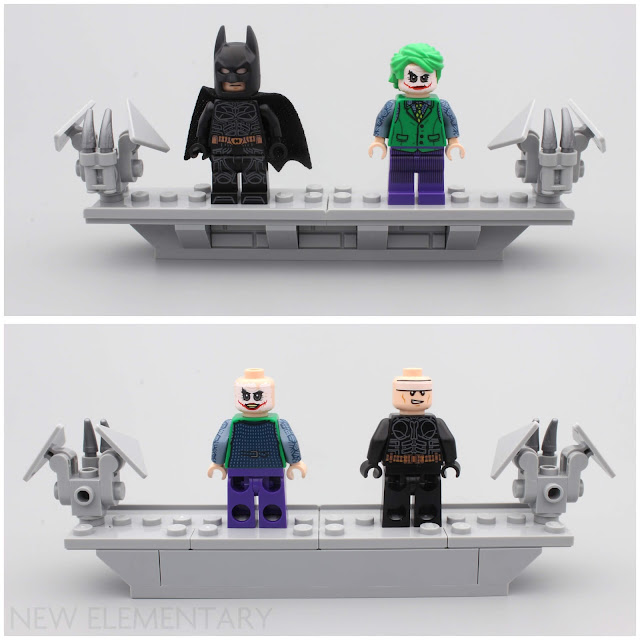 The minifigs themselves are superb, with detailed printing, even on the Joker’s arms and on Batman’s feet. They also both have back printing and an alternate face. The Joker’s outfit is slightly different from his 2014 counterpart: he’s lost his coat and jacket, which makes his green vest much more visible. That led the designers to use a Dark Green/ Green torso, and change his hair to Bright Green (6371593 | 61183), which is also a bit closer to the colour seen in the movie (although I don’t think it’s going to be possible to have a LEGO colour that perfectly matches the Joker’s hair). 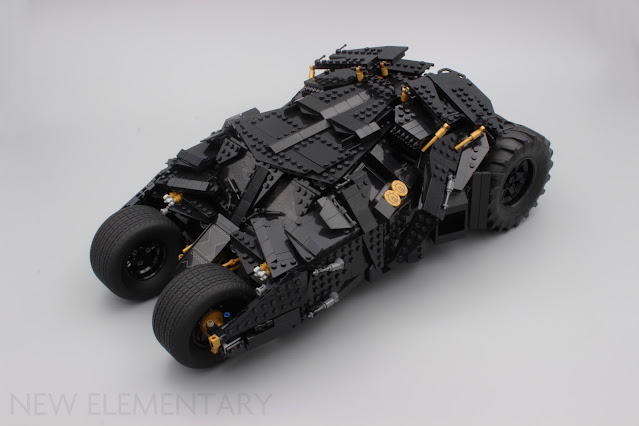 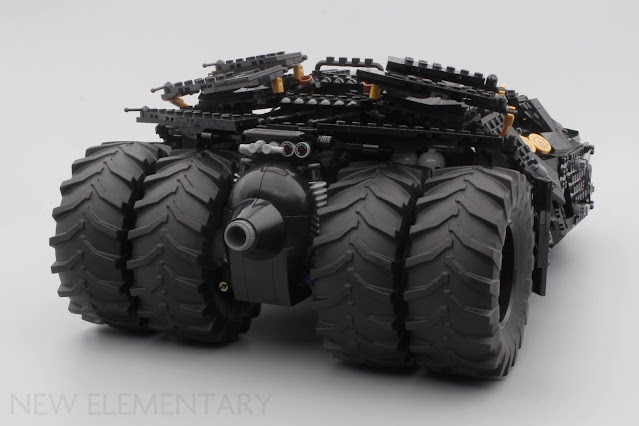 The 2021 Tumbler isn’t much different from the 2014 version, but I really like the small improvements that have been made, especially the use of panels angled in two directions to cover the sides of the front wheels, or the use of ski poles (6250678 | 18745) as actuators. 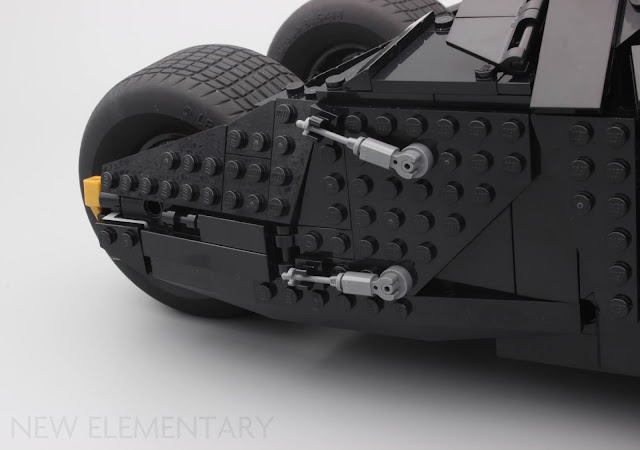 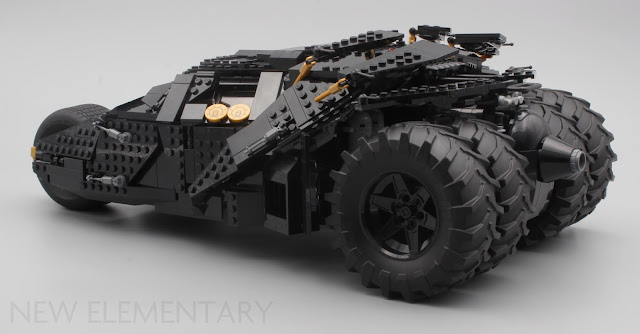 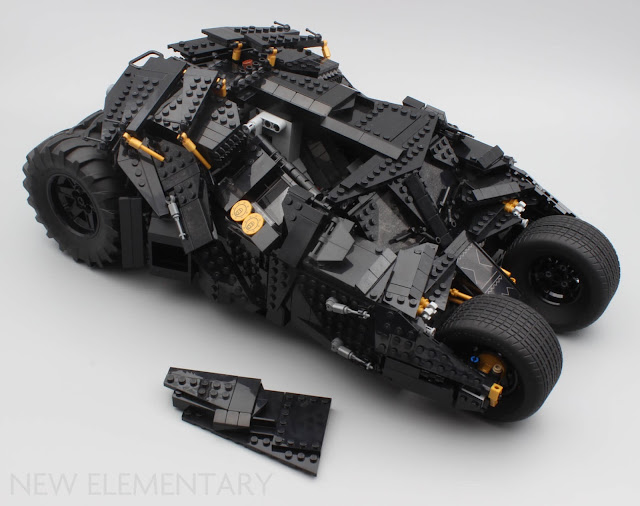 The roof is made of two panels that aren’t attached to anything but simply put in place so they can be easily removed to see the interior, where there are two seats, controls so Batman can drive, and a lot of screens that are made with stickers. 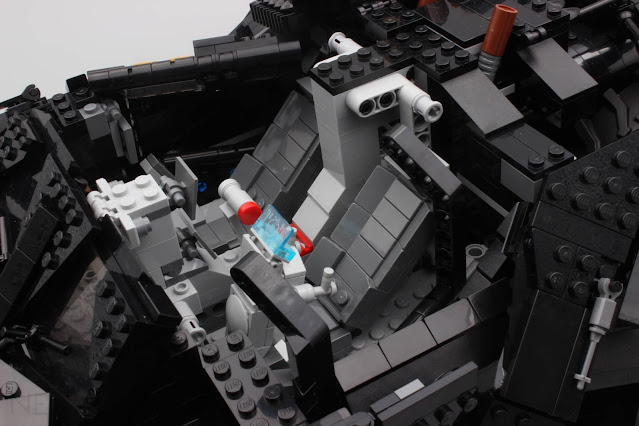 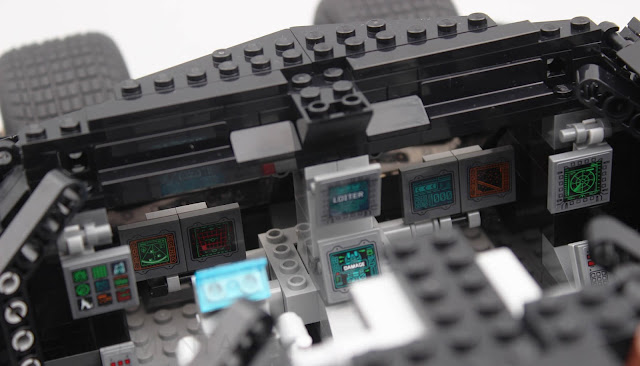 Being heavily based on its predecessor from 2014, this Tumbler doesn’t have many new parts to offer. However, it’s really pleasing to assemble it, to see the numerous panels being added one after one to recreate the complex shape of The Dark Knight’s Batmobile. 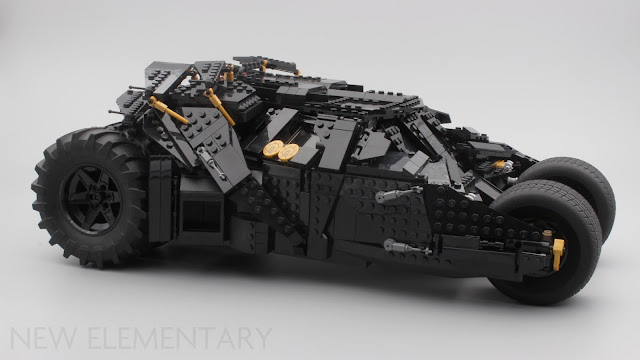 The changes made to the design are subtle, but look great. The tractor tyres make the vehicle look even more powerful and menacing, whereas the narrower front with the angled panels create a more aggressive shape.

My only complaint would be about the stands included for the set, which simply seem out-of-place.