We are skipping our regular Element Developer slot this week to instead bring you a different LEGO® employee interview! In May, New Elementary had the opportunity to chat with Mel Caddick during the 2021 Recognised LEGO Fan Media Days. Caz Mockett and Francesco Spreafico asked Mel some interesting questions to find out more about an unusual department: LEGO® Extended Line. This transcript has been edited for brevity and readability. 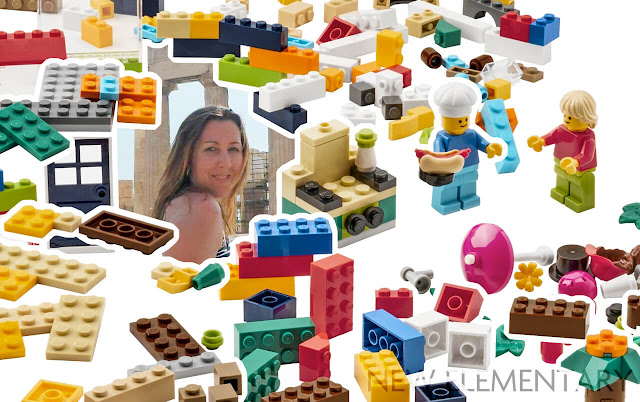 Caz Mockett: Thanks for taking part in our interview Mel, would you like to introduce yourself for our readers, please?

Mel Caddick: My name is Mel Caddick and I'm originally from Australia, and I've been here in Denmark since 2008 working for The LEGO Group, so almost 13 years this year. I'm a Senior Designer in LEGO® Extended Line.

Francesco Spreafico: Can you give our readers an idea of what LEGO Extended Line actually does?

Mel: LEGO® Extended Line is literally that we're extending the line of what is already available. So of course you have all the different theme departments like LEGO® NINJAGO®, LEGO City, LEGO Technic and so on, who are creating all those different products themselves, and then you have LEGO Extended Line but our stuff isn't branded ‘Extended Line’. We do a lot of the Gift With Purchases, not all but we do most of them, and some of the polybag-type things and some other kinds of promotional stuff. We also handle the key chains, seasonal releases, BrickHeadz Pets and some of the other BrickHeadz. 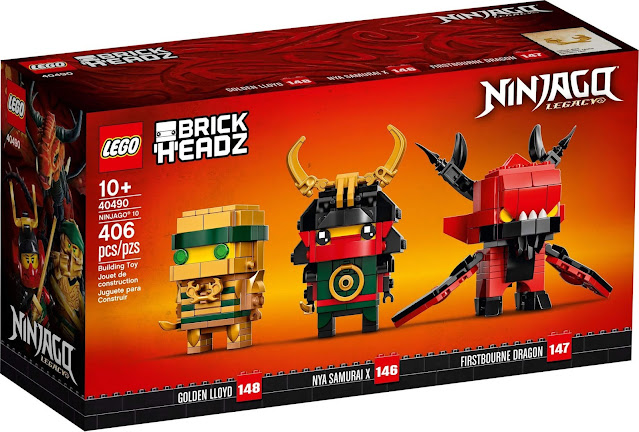 Francesco: Why don’t you do all of them?

Mel: It's a little complicated to explain because there are some sets, for example the LEGO® NINJAGO® 10th Anniversary BrickHeadz [40490], you would probably think that's a NINJAGO set. In theory, yes it is, but it was developed by them for our department. So it's probably more of an internal thing in that regard. It's the same with the Everyone Is Awesome set [40516]; some people probably think it's the LEGO for Adults department but it's a mixture of both.

Caz: Was your team also responsible for the collaboration with IKEA for the BYGGLEK boxes?

Mel: Yeah, exactly. So that's another product, and the same with the wooden minifigure as well. A lot of those ad hoc type products – something that is different, something that doesn't fit into other things – a lot of that comes from our department, in one way or another. 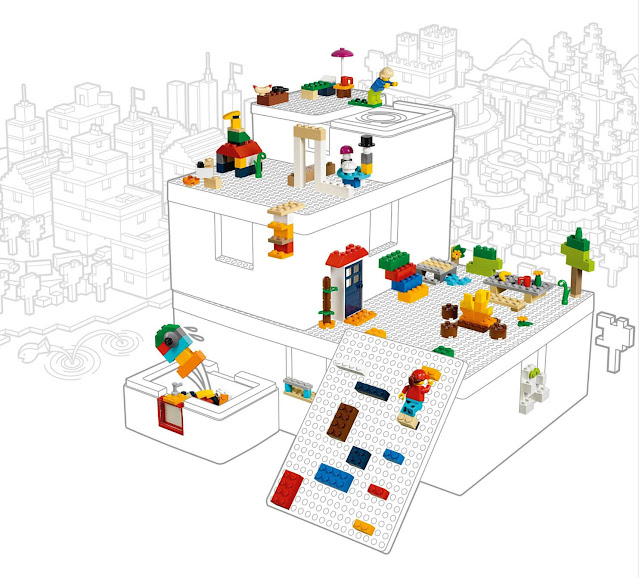 Caz: What are the challenges of those products that are not regular sort of LEGO sets, if you like?

Mel: Unfortunately it's not for me to talk about because I don't know so much of the in and out process of that, that's a different designer. I could only talk to you more about the brick-built stuff because that's what I deal with, I know those processes a bit better. With the BYGGLEK set, I was part of developing most of the elements for the small set included with the box. But that was a collaboration between us and IKEA and many different other people with different requirements.

Caz: ‘Lots of stakeholders’ is the term, isn't it?

Mel: Yes! Every element in there literally has a reason or a story or something, it needs to be a global product. We kind of wanted to go a little bit back to the roots to some degree because IKEA has a certain way of being, a way of thinking and let's have some minifigures in there that don't determine the gender. Everyone has their own story, everyone comes up with their own story, it can be who you really want. And nothing is predetermined in that way. It allows a lot more creativity, a lot more freedom. That's quite nice and I think that's been perceived quite well. And then of course you know, there is a lot of colour in there. It's a creative box where you can do whatever you want. Everything is right and there's no wrong, you could say. So it doesn't matter what you do with it, everything is fine.

Francesco: Can you tell us about something you have worked on recently?

Mel: I worked on this Gift With Purchase together with the fan designer. This is a LEGO Ideas and GWP set from August, the Sailboat Adventure [40487], and was the winner of the competition ‘Build That Holiday Into That Holiday’. The sailboat has the brick-built sails and of course two minifigures and two dolphins. 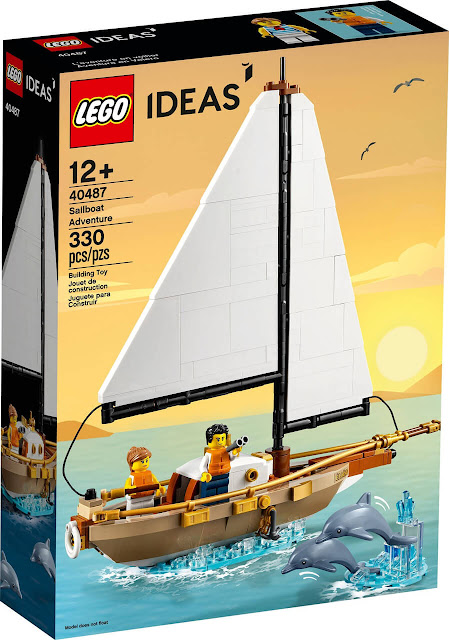 Caz: Nice inclusion of the dolphins! Did you change anything from the fan design?

Mel: I included a few things that are a little bit different. We've got a driving stick, and then of course the base with some transparent elements to look like some of the waves and water, and then there's some interior stuff that's been changed. We've restructured these [sails] as well to make them more stable. The minifigures also have life vests.

Mel: Yes, exactly. And then you can see that the top half of the cab comes off. So you can sit a minifigure at the table there.

Caz: There is more room than you think down there!

Mel: There is actually. That's usually how boats are, isn't it? You think, "how does the whole family sleep in that?" and once you get inside – "woah, it's like Narnia!"

Caz: Where do the briefs for the Gifts With Purchase come from, do you pitch ideas yourselves or are they always dictated to you?

Mel: It depends, for example the LEGO Ideas [Sailboat] was selected by which model the fans decided to vote for, after having the selection of I think around 15 different entries to choose from. And then of course, we didn't know exactly which one it was going to be until the winner had been declared. So that's a fairly straightforward one. In that case it was "hey, the sailboat won so off you go, build that!". For some of the other ones it depends on the campaign, when it's needed, for which time of the year: Christmas and wintery stuff of course are at the end of the year. And trying to do a summer GWP, just as an example, is not necessarily the easiest thing to do because we have two different hemispheres. So, winter is a little bit interesting because we're doing the snowing-type scenes while other countries are not having snow. You get the point!

Caz: I know they can be quite small sets anyway but is there quite a short turnaround time on the design compared to a regular LEGO set?

Mel: Well, they are different sizes actually. But we still go through the same process. We do develop a lot of products in our department in a very short time compared to Core, yes.

Caz: Are there any of the fan-designed GWPs that have caused specific problems which you've had to address compared with getting the brief from an in-house designed set?

Mel: It's actually quite fun to take the fan GWP sets for LEGO Ideas and then I try to keep the model as close to the original design as possible, but of course I'm also talking with the fan. And we're collaborating together and maybe if I come up with some ideas or suggestions as to improvements or what we can do to make the set a little bit more different or interesting in this way or that way. Of course we have a whole bunch of different criteria to adhere to. When you are a fan you can build as you want, but when you're building as an [official] LEGO set, that needs to be done in a specific way. You don't want to be building it and it keeps falling apart for example.

Caz: Yeah, I've been there with my MOCs, certainly!

Mel: Yeah, some of us also build MOCs on the side and we're like, "I built this creation. Don't. Touch. It!"

Mel: When you're developing a product, you don't want to have to say, “please look at it but don't touch it because it will all fall apart”. You want to say “hey, pick this up and play around with it”. 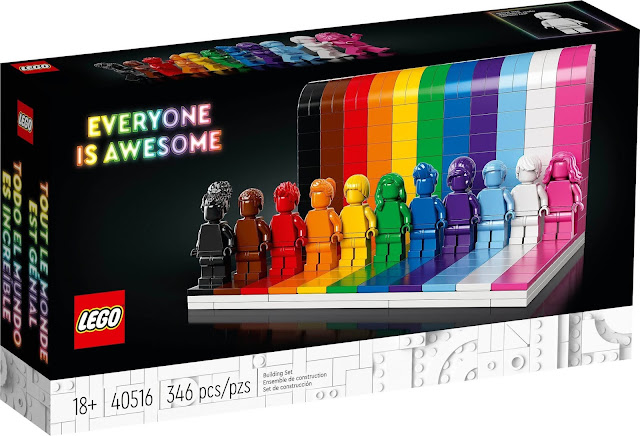 Francesco: Generally speaking, there are no new parts in LEGO Extended Line?

Mel: I will use new parts if they're already created, but unfortunately we don't get to develop new parts.

Francesco: And also not many recolours? I mean, except in the Everyone Is Awesome set, but that is a special case, I guess?

Mel: Things have changed – previously we weren't able to, we had different restrictions. Now, some of those restrictions aren't the same as back then, so there have been certain elements that have come out in the past couple of years that have been colour-changed by us and that's been okay. We don't have all the colour changes in the world of course, because there's implications and other different factors that we have to take into consideration; producing those elements and then storing those elements and so on. So there is a limitation as to how many elements we can hold on to at a time. Some elements come in and some elements go out. There's a limited amount of colour changes each of us can do. So we are a little bit restrictive with some of that stuff, but that is okay, that's just where we have to have our own creativity come in, and work around some of those challenges.

For example with the fan-designed GWP, the teal Vintage Car [40448]. I couldn't colour-change everything because I just didn't have the ability to do that. I only did what I could, and then choose different elements and decide what was the most crucial. 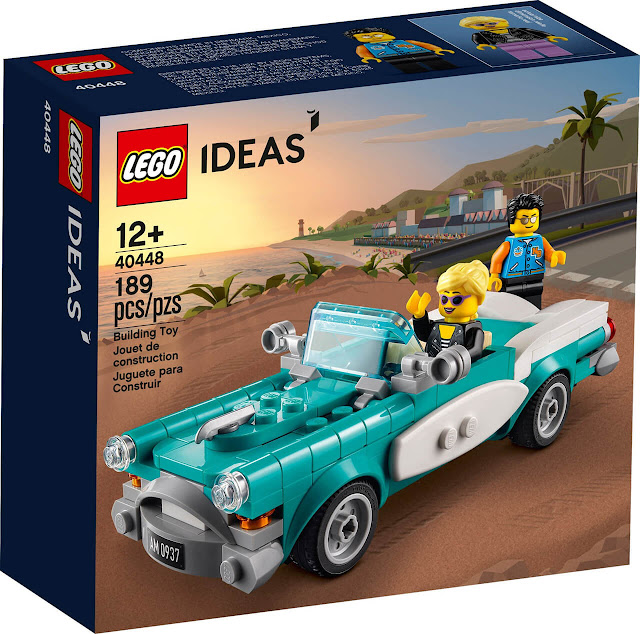 Caz: I'm sure we would all have loved more chrome on that one but we did understand why you couldn't do it!

Mel: It's LEGO bricks, you can do almost anything you want with it right? If you don't like a piece that's here you can move it over there, or if you want to change some colours yourself you can do that. That's the beauty of LEGO play.

Caz: Well thanks very much, Mel. It's been very interesting.

Posted by: Admin Posted on 10/27/2021 11:24:00 am
Email ThisBlogThis!Share to TwitterShare to FacebookShare to Pinterest
Labels: Inside LEGO, Interview