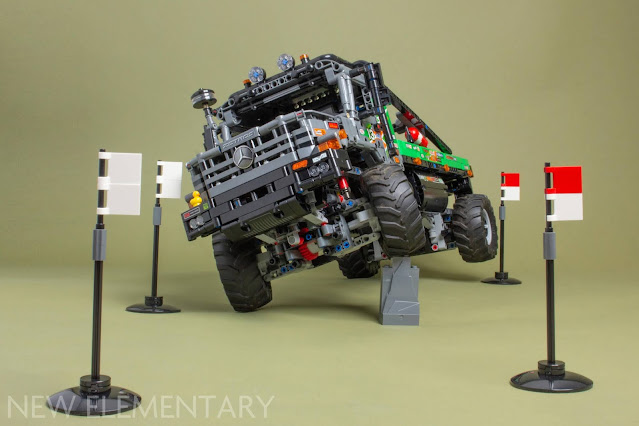 The new LEGO Technic 42129 4x4 Mercedes-Benz Zetros Trial Truck honors one of the world’s most unusual motorsports: truck trials, where a driver navigates a short but extremely challenging off-road obstacle course. This remote-control rock crawler comes with 2129 pieces including two new moulds and a smattering of parts recoloured in ever-versatile gray. Fans of off-road trucking and RC rock crawling will find something to appreciate, but others may find the price tag even steeper than the hills this truck climbs. After 42131 Cat D11 Bulldozer, this set is the second-largest and second-priciest Technic set of 2021 at £274.99 / US$299.99 / CA$399.99 / 299.99€ / AU$$499.99. Keep reading to see the new parts or scroll to the bottom to see a video of this truck in action. 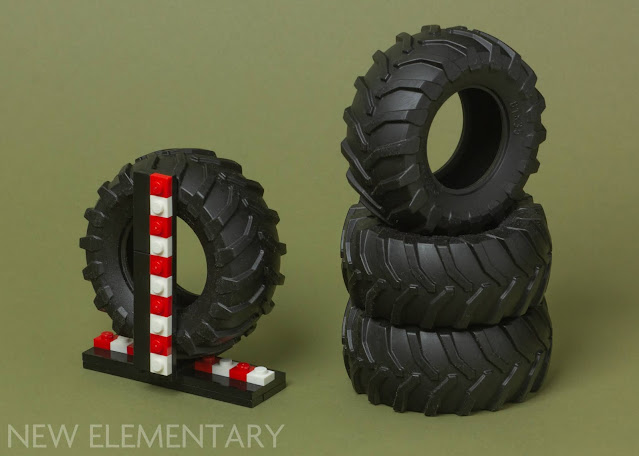 If this tire looks familiar, it’s because this is the second tire with this distinctive herringbone tractor tread pattern. This new rubber is 81 mm or about 10 modules in diameter - 3/4ths the size of the 107 mm tire (23798) introduced in LEGO Technic 42054 Claas Xerion 5000 TRAC VC five years ago and seen in numerous Technic sets since. In our LEGO Fan Media Days interview with this set’s designer, Milan Reindl said “If you want to build a classic tractor that has two sizes of the wheels, this is the perfect tire for the front wheels.”

This set’s other new mould is also an alternate size of an existing part. This new CV axle joint elongates the shorter and still-new Technic, Steering CV Joint, Large Ball (52731) which has a depth of two modules. The new deeper continuous-velocity axle ball joint fits three modules of axle length which gives more flexibility when running driveshafts and other components through the ever-changing geometry of suspension.

Two of these are used to carry the Mercedes’ power to the front and rear live axles, while the remaining joint sends a second input to the back wheels to lock or release the rear differential.

A handful of new, old, and expensive parts have been released in Dark Bluish Gray with the Mercedes Zetros. Lightsaber blades in DBG regularly go for over $5 each (for just one small, basic piece!) on Bricklink as they previously were limited to a few sets from before 2008. It’s now available for $0.06 via Bricks & Pieces in the US thanks to this set. The remaining parts are new recolours, notably the toggle joint which has never been produced in dark gray since it was introduced 40 years ago. 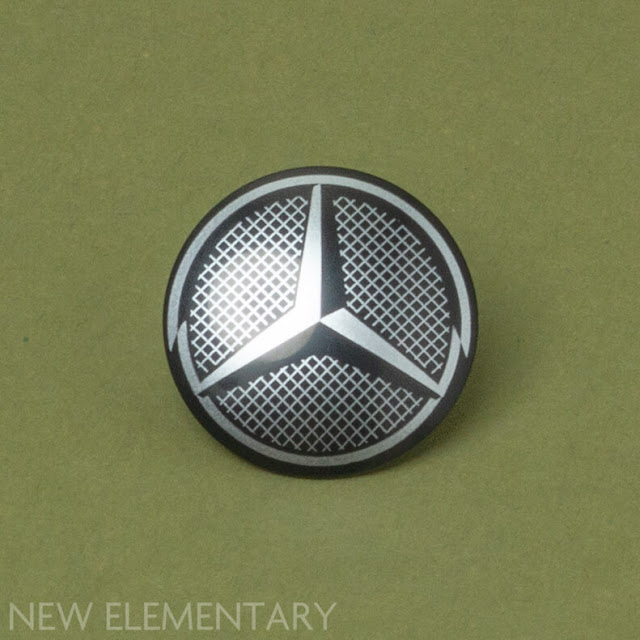 Besides the trial truck’s rubber ducky mascot, one other printed piece makes an appearance in this set: a shield with Mercedes-Benz’s distinctive three-pointed star emblem. The same technique adorns the front of 42043 Mercedes-Benz Arocs 3245, but I prefer this new version thanks to its crisp criss-cross grille pattern.

The Technic builders here at New E can’t get enough of these new flip-flop beams. Alex Campos shared a detailed look at these useful parts in his review of 42126 Ford F-150 Raptor which was released on October 1st. We’re betting plenty of Technic sets will continue to feature this style of liftarm. 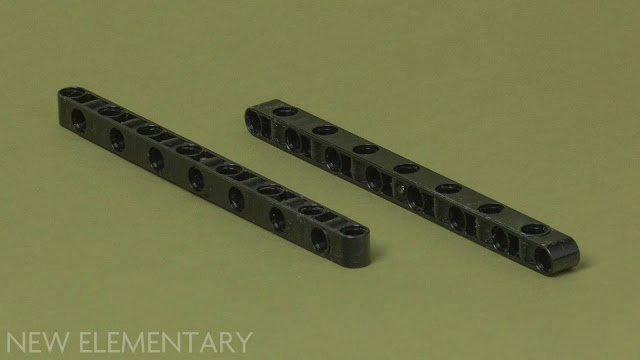 Both sizes of flip-flop beams are featured in the 4x4 Mercedes-Benz. I expect shorter lengths of this part will be made in the future for use in smaller Technic models. 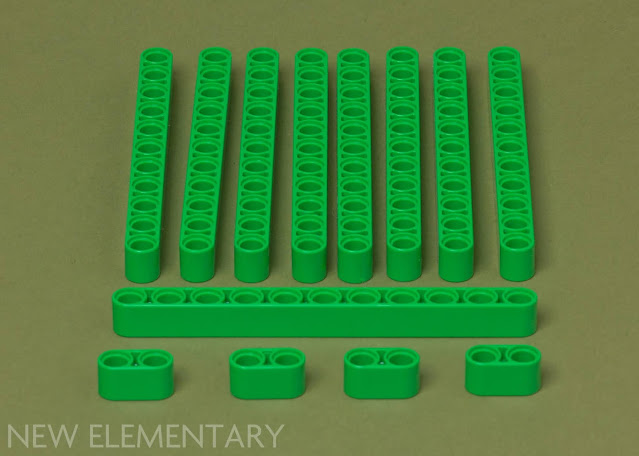 Bright Green is an unusual sight in Technic and the only set to show much of it was 42039 24 Hours Race Car from 2015. The trial truck’s bed frame is made up of Bright Green beams which are not only a welcome treat but also are a necessary splash of colour to brighten up the otherwise military-ready industrial truck. The rarest beams are the 11- and two-module long pieces, each in just one and two other sets respectively. Six of the long beams receive stickers during building and some builders might want to keep these unblemished for other uses. 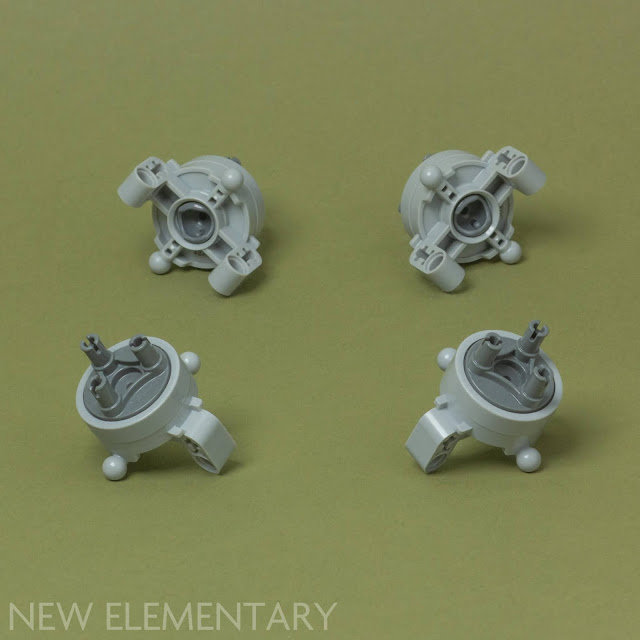 These neat wheel hubs are the same used only in 42099 4x4 X-treme Off-Roader. Each hub contains reduction gears which make the wheel turn once for every five rotations of the axle - this makes the truck slower but gives it more torque to overcome obstacles with.

These last few elements are only in two other sets each. The white 3x3 pin connector and Olive Green liftarms are in 42110 Land Rover Defender and 42117 Race Plane, both of which were also designed by Milan Reindl.

The build and play experience 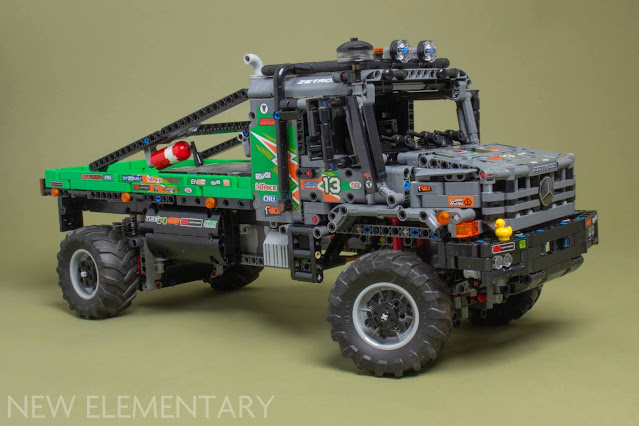 As with any remote-control Technic set, this truck is designed around its electronic powertrain while being sturdy enough to be driven over rough terrain. Technic frames and liftarms snugly encase the motors and gears to form the functional first half of the build, while the second half decorates the electrified platform with the cabin, bed, and hood. I found this set easier to build than 42128 Heavy-duty Tow Truck from the same release wave, but I did forget one bevel gear in a new-style differential housing (65414) and had to rebuild one axle. Whoops! 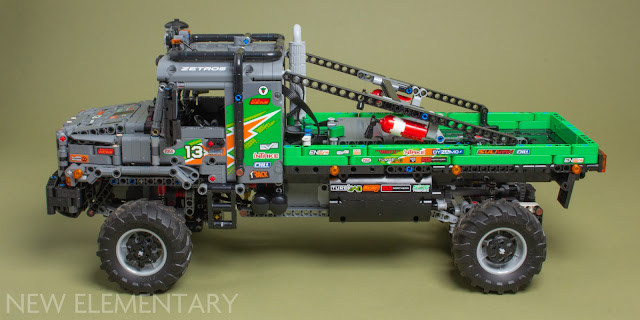 The boxy shape doesn’t need many fancy techniques but the hood has a few nice angles to get the front of the Zetros right. Some System accents are dotted around the truck such as the air snorkel and side mirrors, but I found these easy to break off - especially if the truck rolls over while driving it. Thankfully the complex design of the drivetrain and suspension is solid and protected. Both axles are massive and densely packed with components - up front, the steering motor and in the back, a locking differential. 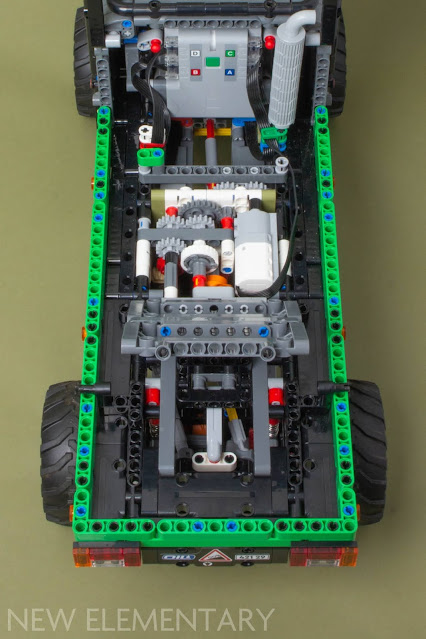 “There's one function that we've never done in Technic before: a remote-control differential lock. So whenever your truck loses traction on any surface that is a little bit slippery or uneven, we just push the button in the app, and constant, continuous distribution of power goes to all four wheels.” Milan shared this in our RLFM Days interview and since that day I had been wondering how it works. Thankfully the truck is designed with an openable panel to show off exactly that: the revealed motor, gears, and orange changeover rotary catch (35188) lock the center differential. Toward the back, a yellow axle carries the same motor’s power to the rear axle’s diff lock through a new long CV joint.

The concept and execution are impressive and it’s fun to see real-world truck drivetrain components shrunk down to the LEGO scale. However, this truck has an enormous turning radius which isn’t noticeably worse with the differentials locked. For this reason, many builders might leave the drivetrain locked up in all situations. 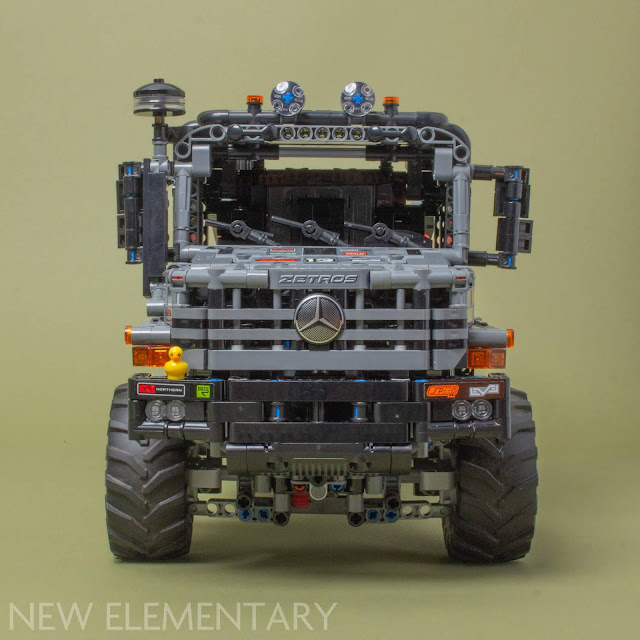 The limited turning ability and truck’s slow speed show it’s designed to climb rough terrain mostly in a straight line. It’s impressively good at that, check out the obstacle course video at the end of this article to see it in action. On the other hand, flat terrain leaves me wanting more speed and tighter turns - the truck’s max speed is less than a slow walk. The trucks of the Europa Truck Trial hardly move at walking speed so this will be no surprise for those familiar with real-life trial trucks, but this could disappoint someone hoping for something zippy. Those seeking a general-purpose RC vehicle should plan to alter the truck’s gear ratio or look at other options. I’ll be re-gearing mine which requires moving the main drive L motors, so this will be a fairly invasive teardown and rebuild when I do so. 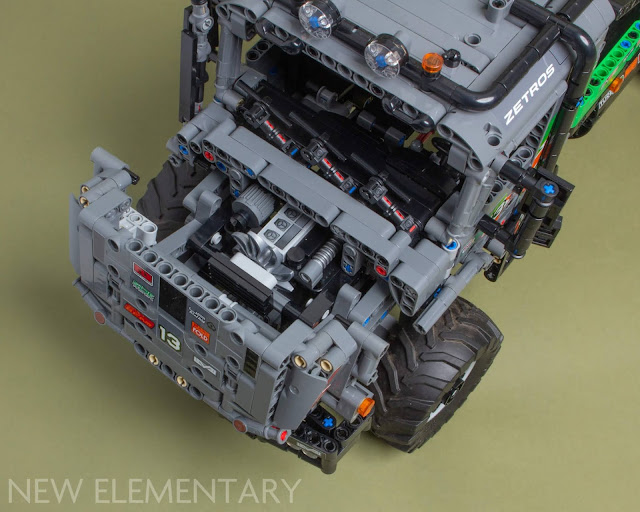 The angular hood covers a basic engine with a free-spinning fan. The hood and doors open easily when titled, and well, the truck’s essentially designed to tilt. I used a couple extra pins to secure these parts in place so they don’t flop open when bouncing over obstacles. 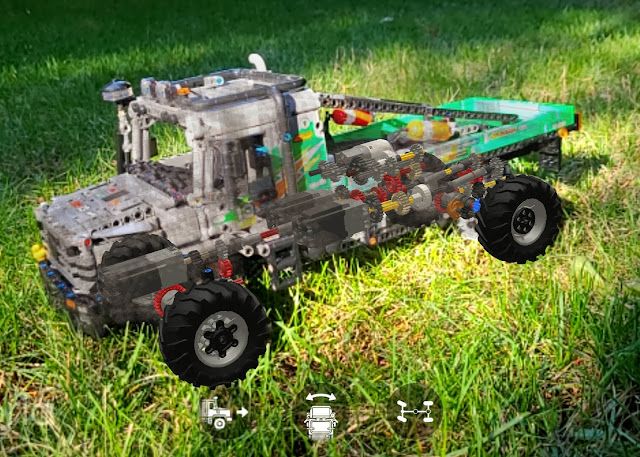 To control this truck you need a smartphone running the Technic Control+ app. My experience with this app on my Samsung S20 was mixed - on the upside, Bluetooth is a stable and solid connection compared to IR, and the app has a fascinating augmented reality mode (shown above) allowing you to explore the mechanical systems of the truck without taking it apart. On the downside, my truck’s steering often locked fully turned to one side or the other and a couple tries calibrating the motors were needed to fix it. I’m not a fan of touchscreen controls either, but there are two control schemes to choose from. I connected an Xbox One controller to my phone and used a third-party app to drive the truck with a physical controller. 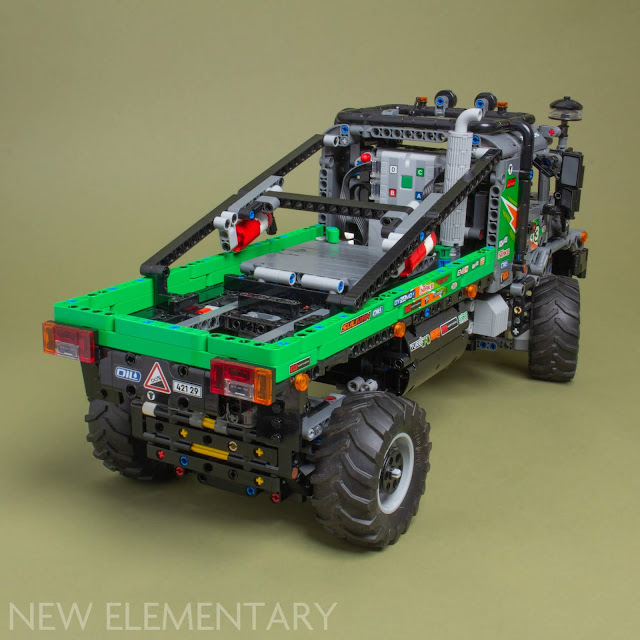 During our interview, designer Milan had a spread of LEGO bricks and an incline for his “baby” to climb. That obstacle course looked good enough to recreate at home, with a twist! My course gives the Zetros blockier terrain to tackle made from wood scraps. In the below video, the truck approaches at full speed and climbs its way through the challenge course. I’ll gladly disclose that I had to reset my truck and alter the course a bit as I traversed it - my selected material is a bit coarse and wet (good ol’ Oregon) compared to Milan’s demonstration grounds. My truck also has its doors and hood pinned shut and some panels removed to get a non-AR look at its gears.

LEGO Technic 42129 4x4 Mercedes-Benz Zetros Trial Truck has enough hill-slaying capability to show off, but it is difficult to recommend to someone other than a RC rock crawling enthusiasts due to the set’s £274.99 / US$299.99 / CA$399.99 / 299.99€ price. This price competes with some non-LEGO RC rock crawlers, but those looking for a building experience are no doubt comparing this Zetros to other Technic sets with nearly the same number of pieces and other attractive functions selling for half this price. A decent amount of new and useful pieces are included and the RC differential mechanism make this a unique truck either way. If you do decide to add this Mercedes to your garage, please consider using New Elementary’s affiliate links, we may get a commission: USA LEGO Shop | Australia LEGO Shop | UK LEGO Shop/for Europe 'Change region'.

Posted by: Admin Posted on 10/02/2021 09:39:00 am
Email ThisBlogThis!Share to TwitterShare to FacebookShare to Pinterest
Labels: Set review, Technic