Tim Goddard (@tim_goddard928) presents a bumper article for you today about LEGO® Speed Champions 46905 Ford GT Heritage Edition and Bronco R! Not only does Tim include our interview with LEGO® Design Manager Specialist Christopher Leslie Stamp, he analyses the set and its parts, and creates an original MOC with its parts. Products in this article were provided by LEGO; the author's opinions are their own.

Ford: the backbone of American automotives. Today we look at a set comprising two of their most famous offerings, with a very special bonus – some exclusive comments from the LEGO® Speed Champions design lead, Christopher Stamp, taken from an interview with New Elementary earlier this year. From Chris we learn about why the set was not originally part of the 2021 line up, why these vehicles were chosen, and where the new 1x5 plate really came from.

When Speed Champions changed the standard width of their cars from 6 to 8 modules in 2020 it upset some collectors as it made their collections so far sort of redundant, and it upset some city builders as 8-wide cars did not sit well with standard roads. But this set, alongside many other offerings, have really proven what a great decision by LEGO that was.

The set comprises a GT Heritage edition in lovely Gulf livery, and a chunky Bronco R. Here they are in all their (unstickered) glory. 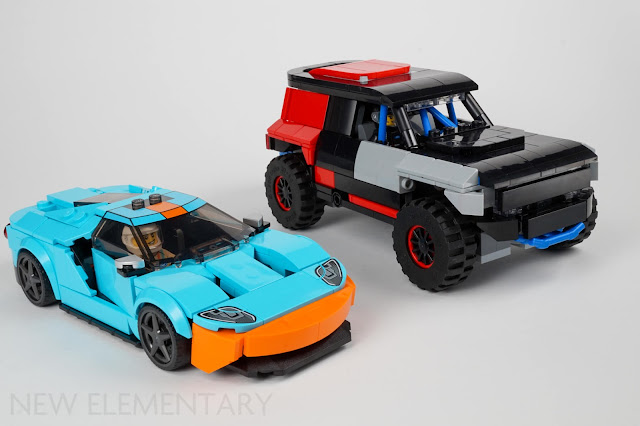 This set was a surprise entry into the 2021 range, because when we spoke to Chris about the 2021 range way back at the 2020 Fan Media Days he didn’t mention it. So what happened there, Chris?

Chris Stamp: "That's actually a really good point; it came in after we'd done all the Media Days because it's only in a few specific stores, it's not full retail like everything else. Somebody came to us and said, "there is an appetite for an extra product, would you be interested?" I'm like, yes, instantly! There's always room for more cars in our collection!

"I thought, 'we've got Dodge, we've got Chevrolet – if we could get Ford, that would be the icing on the cake for America.' We looked at what the options were and we proposed the Bronco, because for Ford, that was a big deal for them. We've looked at the Bronco in the past and it's never quite fit, because there was always the older Bronco which was quite boxy and it's not really a 'speed champion' type of thing. Then, when we showed them the Bronco… the immediate reaction was, 'Let's do it.' I did the Bronco and my colleague Søren Dyrhøj, who you might have seen on LEGO Masters Denmark, he worked on the GT.

"We felt pretty confident – previously we'd done a Ford 150 Raptor and the Mini John Cooper Works Buggy, so we felt that this was something that's in our area. Having a roll cage and no windscreen was really exciting... and quite challenging – we like to challenge ourselves! It's so different to anything else we've done – the silhouette, the build experience; everything is just unique.

"The more people we talked to internally – like all our American colleagues – they were saying, 'the Bronco is huge for them, it's like an icon!' So it ticked a lot more boxes than me, being a European, had realised. I was just looking at it from a purely 'building Speed Champions' perspective." 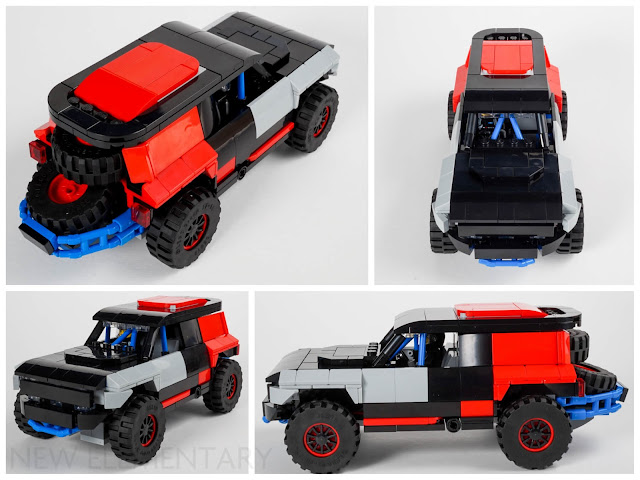 The main body of the vehicle is indeed an interesting build with lots of direction changes, angles and curves. It is actually 9-wide in most places, which explains the presence of the new 1x5 plate. 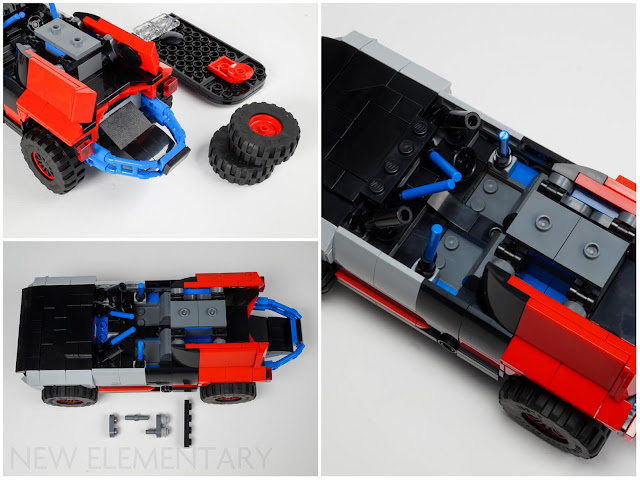 The internal roll cage, which is made up of blue 1x3 bars, is the most innovative part of the build. The back two use mixel joints to get the required angle but the front two are where it gets really interesting. Firstly they are angles on the vertical using the 1x1 plate with bar – something that has been seen in many sets before – but to achieve the horizontal angle they rest against a 1x4 plate that is about a quarter of a plate offset in height. This is done using the fantastic new 2-long bar, feeding through plates with holes.

The Bronco R is a prototype extreme off-road racer, which explains the rack at the back for two spare tyres. You do not want to be stuck in the middle of nowhere with a flat tyre. The LEGO version realises this rack with a couple of tasty recoloured pantograph pieces.

If you feel the need for more speed the second build, the GT Heritage, will be perfect for you. The curved front is what really gives the car a distinctive look, and it is nicely realised. 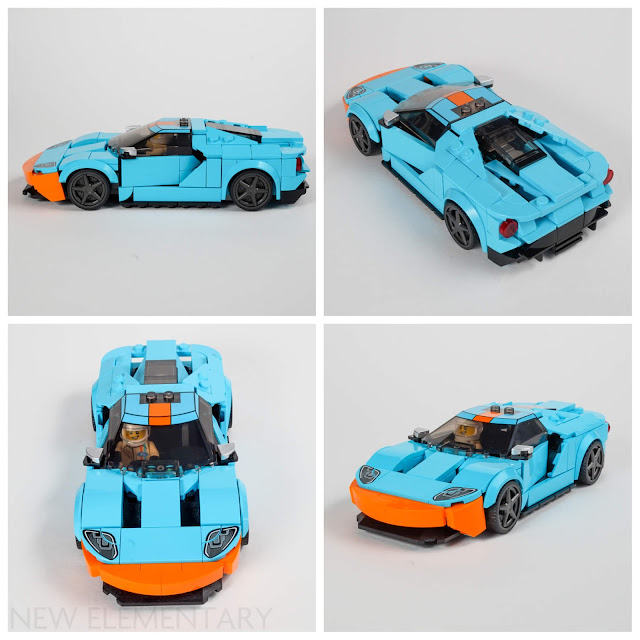 But why was the GT chosen to pair up with the Bronco, especially given that a Ford GT was previously included in a Speed Champions set, 75881?

Chris: "We talked a lot about 'do we do the old versus the new – get the old Bronco in there?' But it's still not a 'speed champion', it still doesn't really hit all of the right keys that we need.

"After we launched the 8-module wide sets, we saw that a group of fans were commenting that 8-wide doesn't fit in the big LEGO city that they've made at home in their spare room. They were saying, 'okay I'll buy the 8-wide, but I'm gonna customise it back to 6 modules'. So, we saw this as a perfect opportunity to take the 8-wide and show them how we've evolved from the 6-wide, by redoing the previous vehicle!

The medium azure with a little splash of orange is a wonderful colour combination. 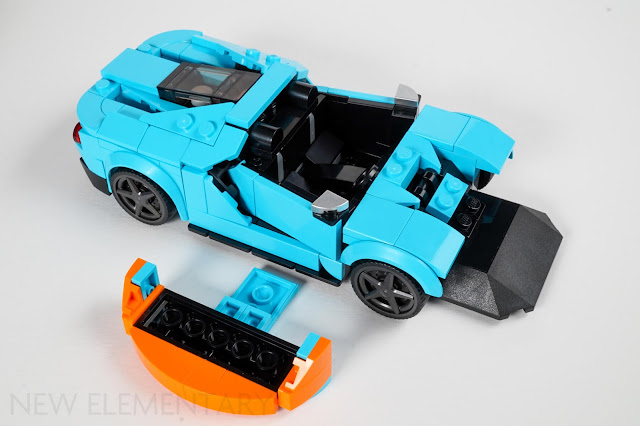 When building the chassis from the bottom up I was surprised by the inclusion of a train roof piece - 1x Roof Front 6x4x1 in Black (6031790 | 13269). It just seemed too big and chunky to fit with the design, but when finished it just pokes out the bottom to represent an air intake. Clever!

Headlights are talked about a lot in Speed Champions sets; they are often such a key and iconic part of a car’s design and whilst brick-built is preferable, it is not always possible to capture the right feel this way. Stickers can be difficult to apply accurately; if they are put on wonkily they ruin the whole look of the car. Happily they are printed parts on the GT, and look pretty good. 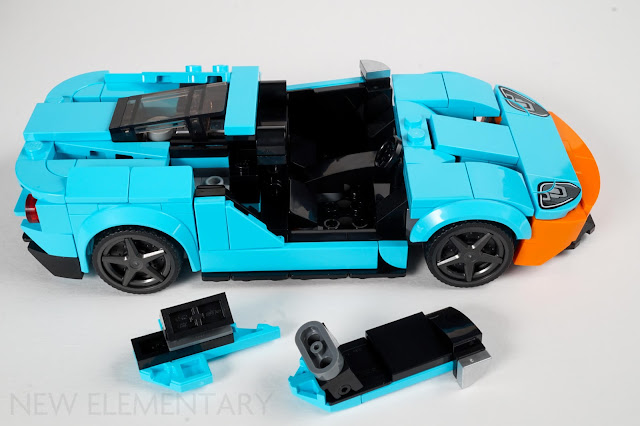 There are some funky angles created towards the back of this car, created using some good old hinge bricks. Sometimes the old parts are still the best.

The minifigures and stickers 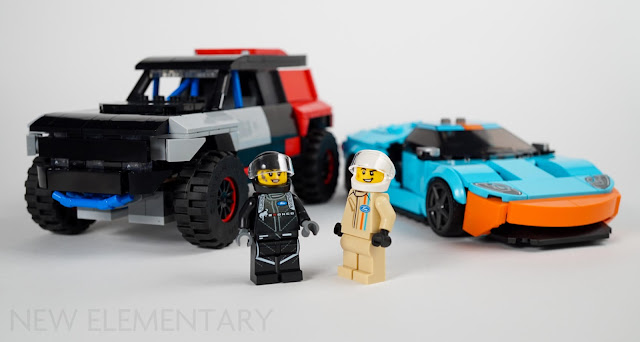 A couple of exclusive Ford drivers are included and are ready to race. 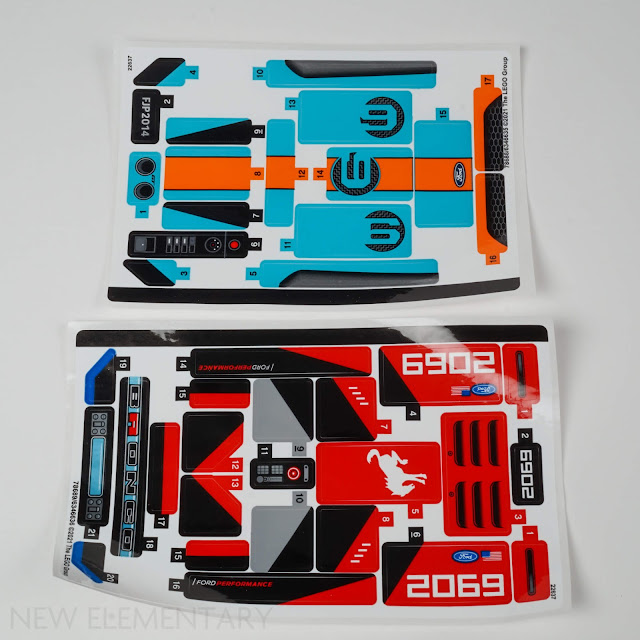 It would not be a Speed Champions set without plenty of stickers. Here they are, mint and un-applied, ready to be filed away and used in some mythical MOC at some point in the future.

Speed Champions sets always catch my eye because of the impressive selection of small and interesting parts they contain. Not only that; they also include a lot of parts in the same colour. No handful of randomly coloured parts are buried inside here. 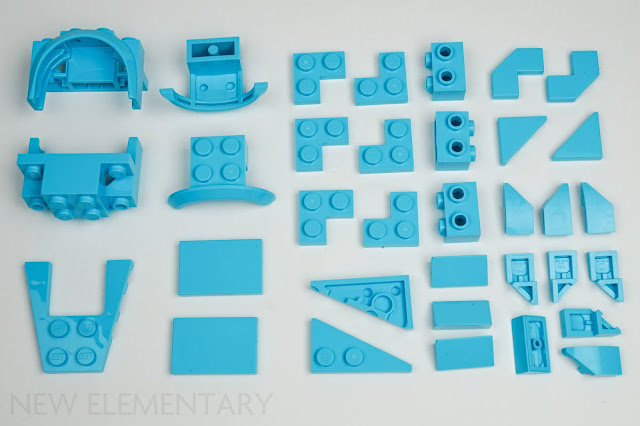 Medium azure is the main attraction with this set, the noteworthy parts being;

Regarding the quantities of those last two items, not that LEGO have tried to unbalance the universe again by including a right side plate as part of a kite in set 41447 Heartlake City Park but no left side plate.

This next parts selection includes some interesting bars; 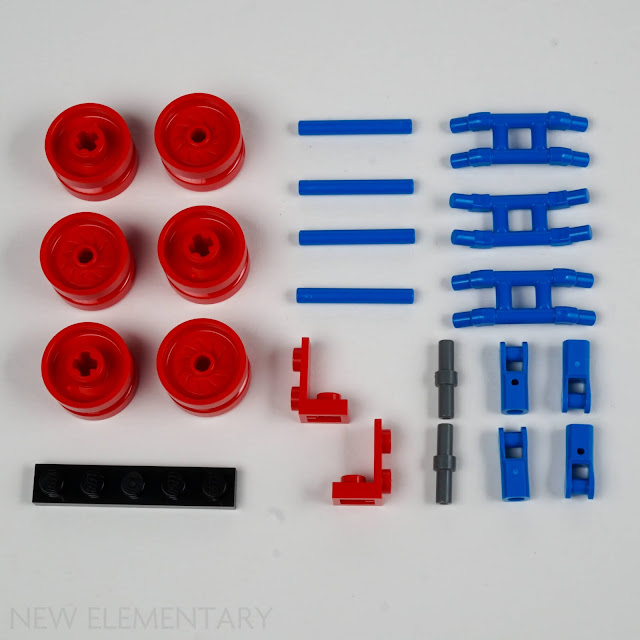 The latter is one of this year's star new parts, already in 10 sets. However it’s the 1x5 plate that has caught everyone’s attention… and Speed Champions builds often require odd-length section widths... so we just had to ask Chris if it was Speed Champions that introduced this thrilling new part?

Chris: If I was to take credit for that, I wonder if I'd become a hero? [laughter] To be honest, we didn't make the 1x5 plate but we've utilised it as much as we can! It's an element that, even back 10 years ago when I started, people were talking about internally. And then there were other people internally saying, 'but you can do that with a two and a three, or a four and a one... or a six and a pair of scissors!' No, that was actually the design lead on Minecraft, he brought that in. And when I heard rumours about it, I had to run to the other end of the building and ask, 'this isn't an April the First is it?' But yeah, the 1x5 plate... that's a beautiful element. Just talking about it makes me smile."

There are yet more inspirational parts; 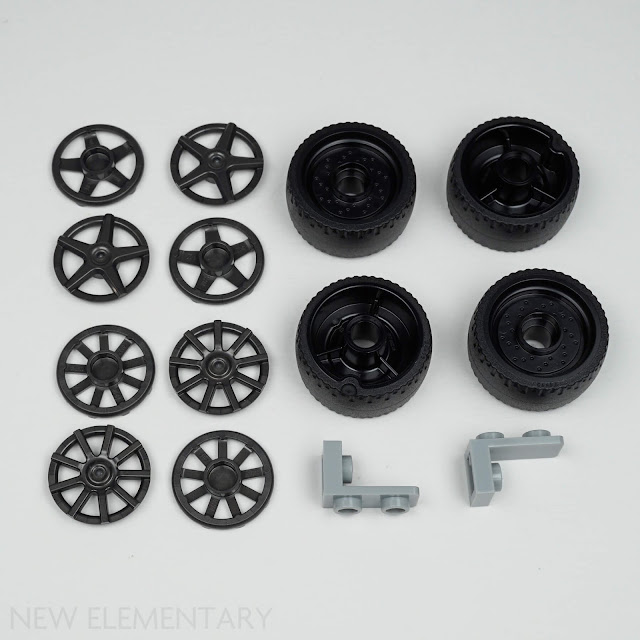 The realism of the car designs in this range really stepped up a notch when 2 modules were added to the width. The extra width allows for some innovative and clever techniques to be employed which is partly achieved with an ever-increasing range of brackets for us to drool over and use in our own creations. 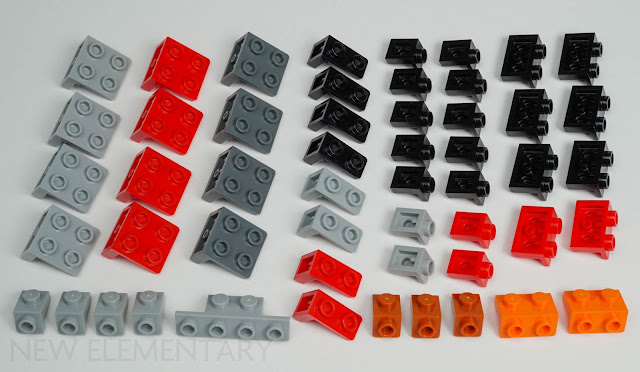 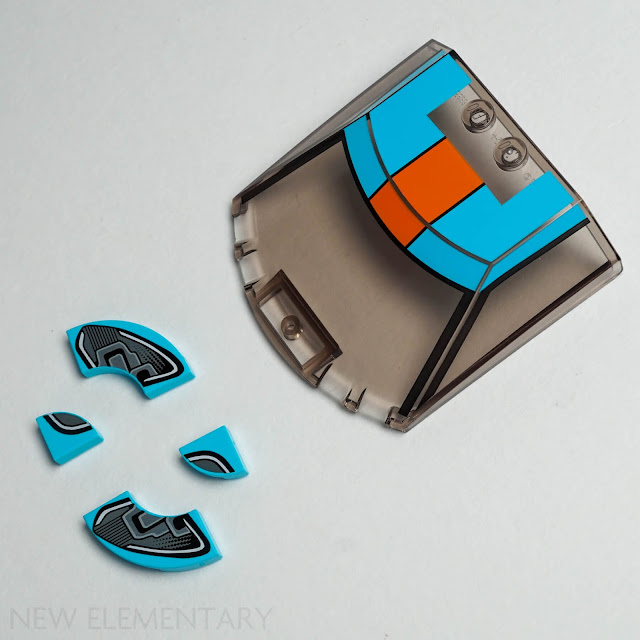 Of these all-important printed parts, I can see the windscreen (6346628 | 78681) being most useful in MOCs, although the 1x1 quarter-circle tiles could be interesting.

Finally I leave you with a couple of little models made with parts from this set. 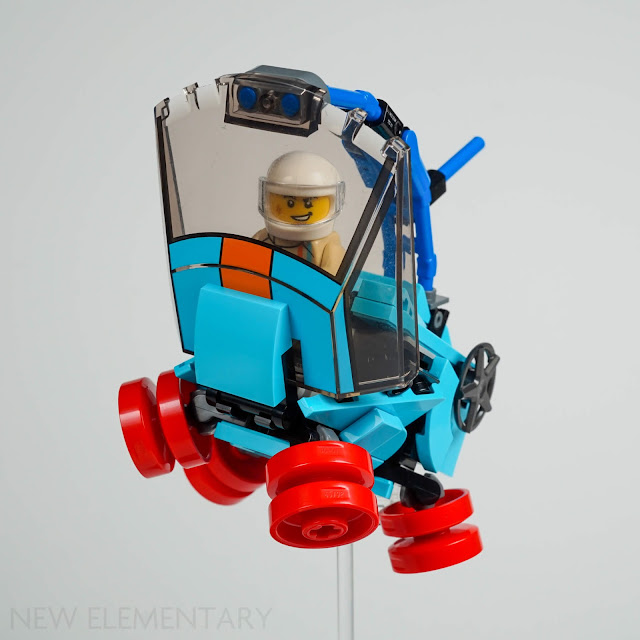 This little hover bug racer started with the colour scheme of the GT then added a bit of red and a bit of blue before taking to the skies. 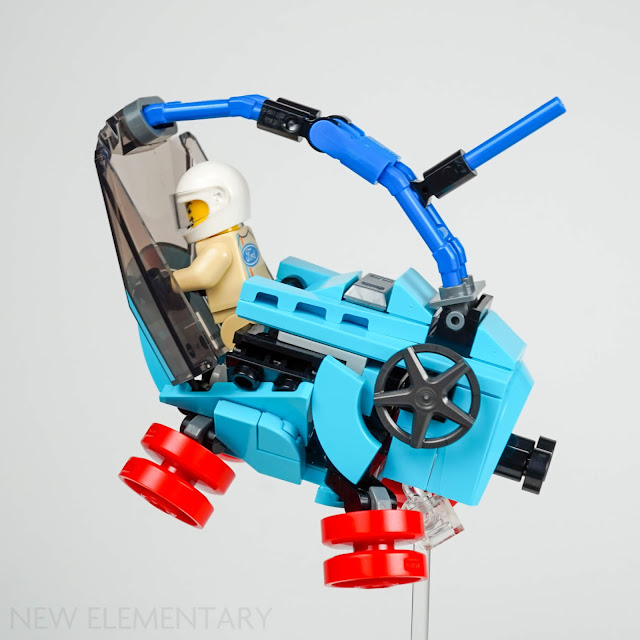 If you have read this far without just reading the interview sections and looking at the pictures, I thank you. You deserve a hug. 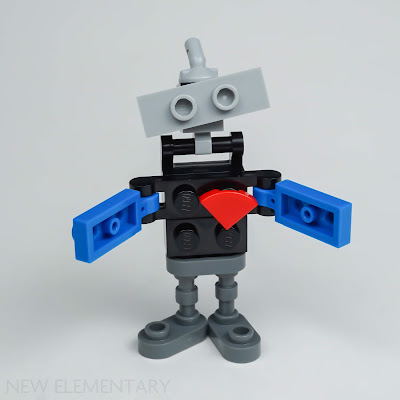 Our thanks to Chris Stamp and AFOLET for the interview.