Aron Gerencsér (@_pohaturon) has been busy organising another parts festival for you, featuring some guest builders, which we will be revealing to you every Tuesday for the next 3 weeks, starting today! And for the first time, the chosen seed parts are not new - in fact some people might not even class them as proper LEGO® parts. I guess that makes this our first ever Forbidden Elementary Parts Festival! 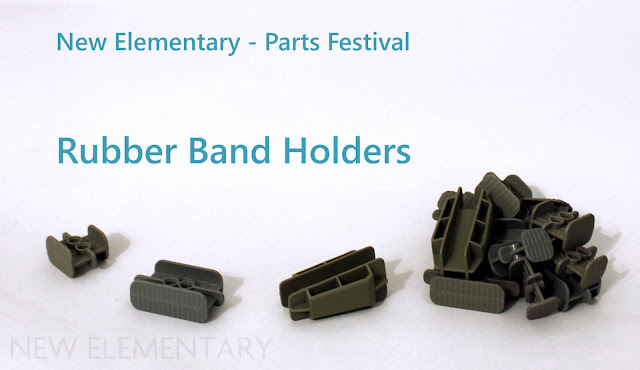 Throughout the decades, we’ve seen the LEGO® building system evolve in oftentimes unusual or unpredictable ways to accommodate new designs, new functions, new themes or even material and manufacturing changes in the company’s attempts to become more environmentally friendly. One of the most fascinating products of this evolution, to me, are those elements which service other elements –and not the set itself.

My fellow New Elementarian Tom Loftus delved into a similar topic with the sticker sheet cardboard box a while ago, and back in 2018 Elspeth De Montes explored the plastic left over after detaching Harry Potter wands - however this time around, our subjects are neither packaging nor sprues. But sort of. Maybe?

Rubber bands have been present in LEGO sets since at least 1969, facilitating mechanical functions above all else. MOC builders have used them in all manner of ways, not just functionally but also decoratively - they’re common, and not much to write home about these days. Less well known are a funky subset of parts seemingly designed with the sole purpose of holding these rubber bands inside the package.

While these days rubber bands are packaged in similar cardboard boxlets like the one examined by Tom, between 1998 and 2014 three dedicated elements were instead included in some sets for this purpose. Officially, no set, alternate model or combiner model ever included these pieces in the actual construction process, despite two of them sporting legal connections.

Their unique shape and texture makes them interesting for MOC making purposes, so I teamed up with two other builders, James (JakTheMad) and Mitch (CZQ), to delve into how these strange little elements could be used in our own designs.

First off, let’s take a look at the subjects themselves. As mentioned before, documentation of these pieces is spotty at best - Brickset does not list them at all, and while they do have Bricklink entries, the list of sets they appear in are incomplete. Other LEGO parts databases work off Bricklink’s data, if they list them at all.

There are three types of rubber band holders: 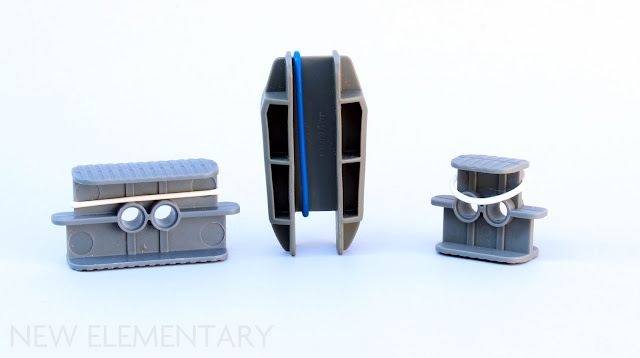 The one on the right may already be familiar to many of you, due to its association with the late Nate “nnenn” Nielson, an important figure in the LEGO community in the 2000s.

The one in the middle is the most interesting in my opinion, with the most unique shape and lack of any official connection points. Having only appeared in Xalax sets - we’ll wait while you look it up - it’s also fairly rare.

For simplicity, we’ll be calling these three the small, large and Xalax rubber band holders. 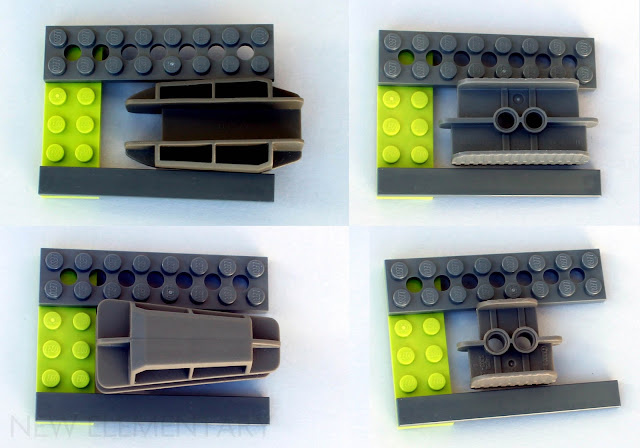 A fun thing to note about the dimensions is that these parts are a weird mix of being in System and also not. The top and bottom surfaces of the small and large holders don’t quite conform to whole module lengths, but the height and widest sections do. You might note in the top left image how the tile and Technic plate are slightly being forced apart by the Xalax band holder due to the slight angle on the two sides, which also results in none bar two of its faces, sides or vertices being in system, which are shown on the image below - the ends are three modules and two modules tall, respectively. 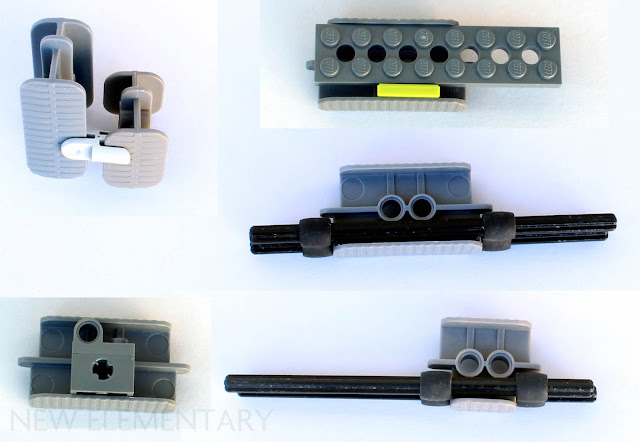 To some, odd dimensions might be bothersome, but they also offer some unique opportunities if you are willing to go for some deep cuts regarding parts choices, or don’t have qualms about friction connections. Things are, of course, easier with the small and large rubber band holders as they each possess a pair of standard Technic pin holes - but we won’t be satisfied with just that. My favourite of these connections is the one relying on entrapment with 1 x 2 rubber lift arms. Jamming various parts in between the overhang isn’t the most secure of friction connections, and your mileage may vary, however the technique using Arm Piece Straight with 2 and 3 Fingers (3612) is quite secure. 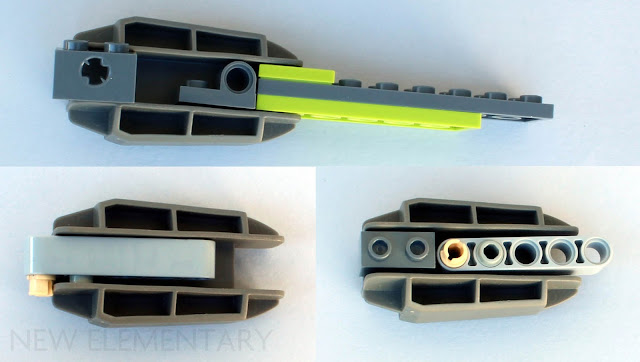 Finding connections for the Xalax rubber band holder is somewhat more challenging, though surprisingly enough I discovered more options with actual case uses in MOCs. The 1 x 2 rubber lift arm technique makes a return, and friction connections with greater stability. The “vents” on the side of the thicker portions support the tried and true technique of “just jam stuff in there” to varying degrees of success owed to their different thicknesses. I’m quite a fan of the friction connection using ball joints pushed into the central gap, though if you use just one it is awfully loose. Annoyingly, the central gap is just barely out of System otherwise - the two examples on the bottom of the image above have no useful friction at all. 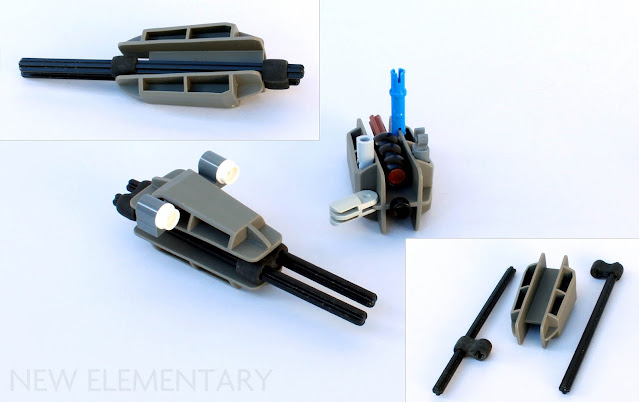 The image above features only secure, sturdy connections - it is worth noting, however, that jamming a Technic pin onto the rubber band holder like that will stress the pin a bit.

So now that we know how we can use these usual pieces together with other LEGO elements, it’s time for implementation.

For the first MOC, my intention wasn’t simply to use the rubber band holders in a build, but to come up with something that features them primarily, and combines multiple of the available moulds. 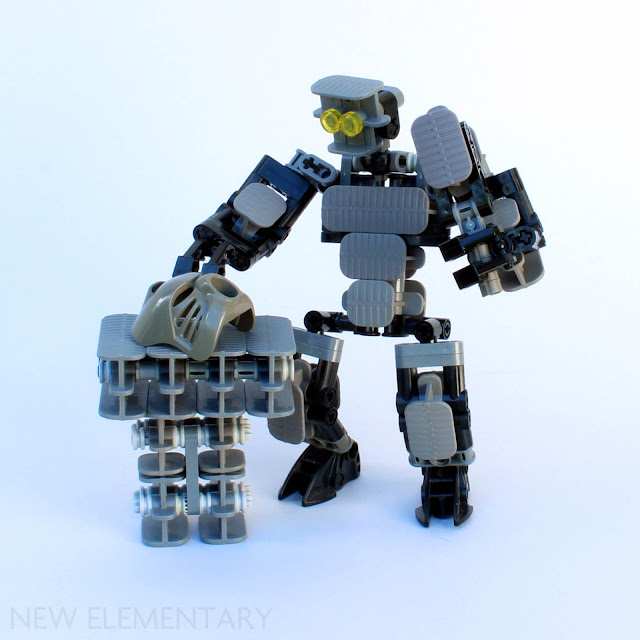 Since my other builds use the Xalax rubber band holder, here I focused on showcasing the small and large variants instead. Alternating between their sides of different width gave the Matoran’s body its shape, whereas the pair of pin holes were perfect for limb joints. The anvil makes use of the overhanging ledges to interlock a stack of larger rubber band holders with a scaffold built out of the smaller ones.

I’ve grouped these two together because both use the same technique on the same piece, just for different purposes: the Xalax rubber band holder with the entrapment technique, using Technic axles and the 1 x 2 rubber lift arms. 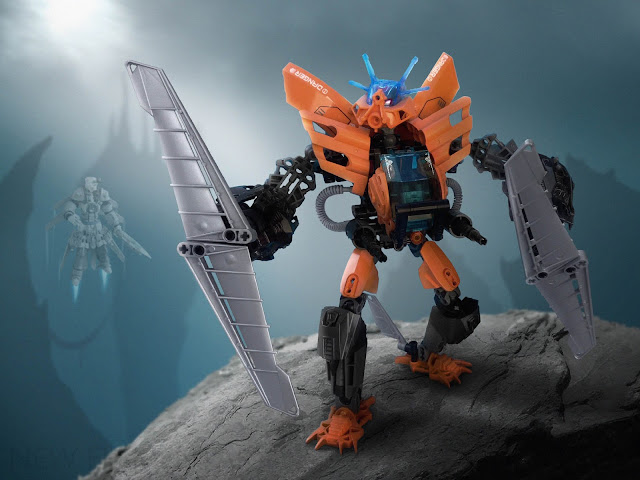 The rubber band holder pieces themselves form Pohatu’s shins (above), and the body of Komondor’s weapon (below). 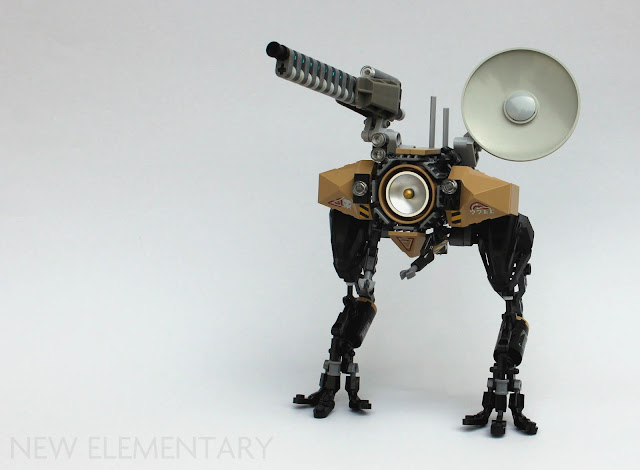 Komondor itself is part of a series of similar MOCs, and its sister build appeared in another New Elementary article recently - there’s a third on the way too, also debuting here.

This hover car makes use of the rubber band holders both in the front and the rear. The small variants are connected using the pin holes, with their shape and texture having reminded me of engine parts. The initial plan of a standard hot-rod build using the pieces centre-front evolved into this sci-fi interpretation. 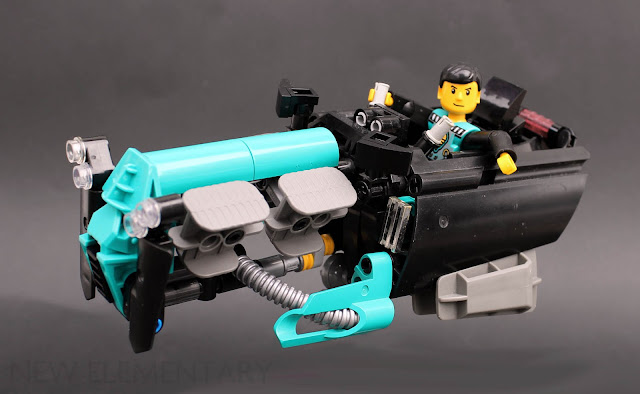 The Xalax rubber band holders giving some technical detailing to the rear of the chassis are secured using the ball joint technique, which allows them to be rotated at an angle. This added flexibility of the unusual connection came in great, allowing the pieces to sit flush against the larger Technic panel next to them - a more rigid connection would have left an unseemly gap. Playing around with such unorthodox and ‘illegal’ building techniques puts the unique set of limitations official set designers need to deal with into a new light, and makes it all the more impressive when they wrangle parts into unconventional shapes, at odd angles while sticking to the rules.

Possibly more so than any other, these rubber band holders prove that no element is useless, with our own creativity being the only thing that limits how versatile a given design is - no matter how specialised. Others have used these pieces in MOCs to great effect in the past as well, and there are two more articles coming up within this Parts Festival.

READ MORE: Check out what the next builder, James Kavanagh, made using the rubber band holders

Posted by: Admin Posted on 8/10/2021 05:30:00 am
Email ThisBlogThis!Share to TwitterShare to FacebookShare to Pinterest
Labels: MOC, Old parts, Parts Festivals