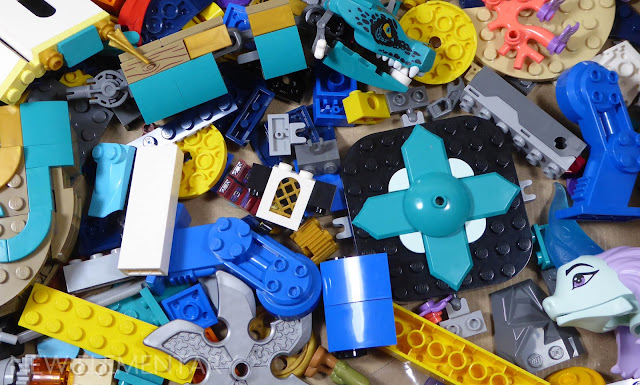 As outlined in the 5x5 fest introductory article, each contributor was given two fixed sets, a Beatbox and a choice of up to two other sets. My five sets were 71476 Jungle Dragon, 43184 Raya and Sisu Dragon, 43107 Hip-Hop Robot BeatBox, 71740 Jay’s Electro Mech and 41921 Extra Dots Series 3.  I have not exclusively used parts from any of the sets in my MOCs, more is the case that I have used parts from all these sets in a haphazard fashion.

In addition to these, I will admit to having purchased quite a few duplicates of some of the newer, interesting or recoloured parts - I luckily found a couple of BrickLink stores who had got some of the LEGO® VIDIYO containers at an affordable price and the mech legs were available at Bricks and Pieces. Still, I have invested a small fortune, you could say I’ve eaten my way through a lot of LEGO... 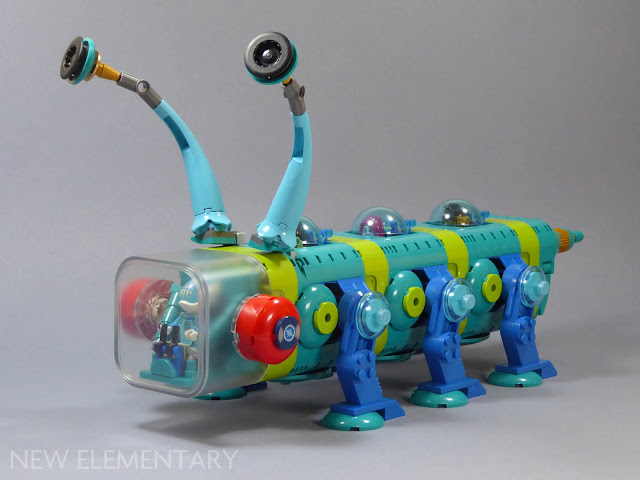 Eric Carle’s The Very Hungry Caterpillar was one of my favourite books as a child. I was sad to hear of his passing earlier this year (around the time I was working on this MOC actually) and so I dedicate this build to him. Eric Carle 1929-2021 RIP. 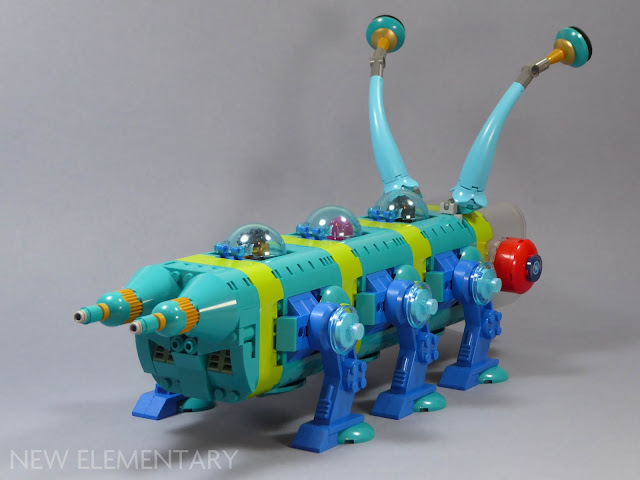 I was thinking of naming this the Bus-a-pillar or Mechapillar - either way, I intended it as a caterpillar tour-bus for a Vidiyo Band… All aboard the (B)eating Machine for the Tomato Hornworm World Tour 2021! 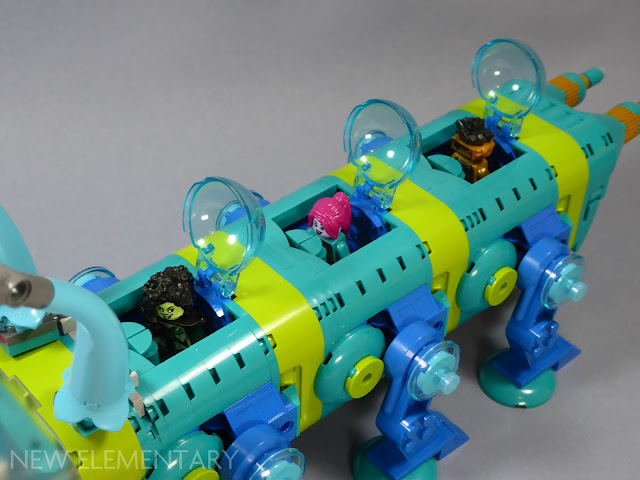 Only now as I’m writing this does it occur that this thing will at some point in the future build a mecha cocoon around itself ready for it’s metamorphosis into some bizarre private jet butterfly… in keeping with the Hungry Caterpillar, it could even be called “Fed Zeppelin”. 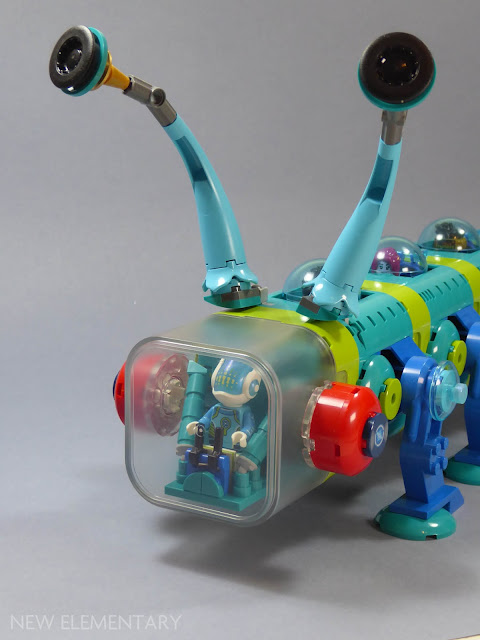 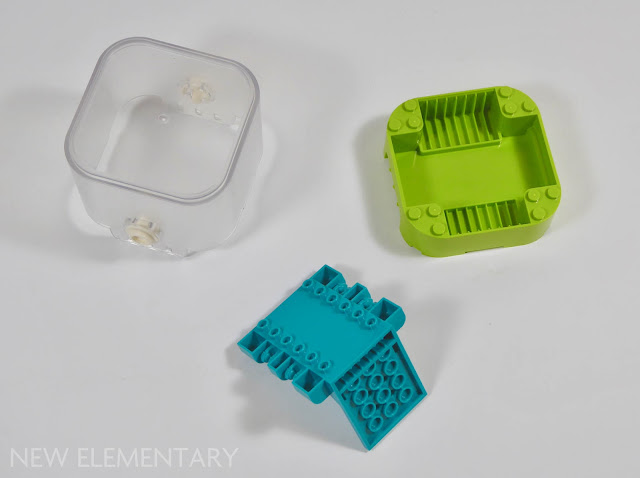 The Vidiyo pieces (as covered in Caz Mockett’s excellent article) are only available in a small palette of colours currently and whilst there is a lot to like about the look of them, there are some questions I have about integration with other more common parts. I will freely admit to feeling a little disappointed with some of these parts and the limited number of connections I could make with them. Mostly it was the canopy piece, I would simply have liked to see a greater number of attachment points. Looking at this piece in isolation: nothing very much about it says LEGO to me.

The base piece is a little better, although just an array of 2x2 or 2x4 studs in the centre of the smooth area here would have appeased me. 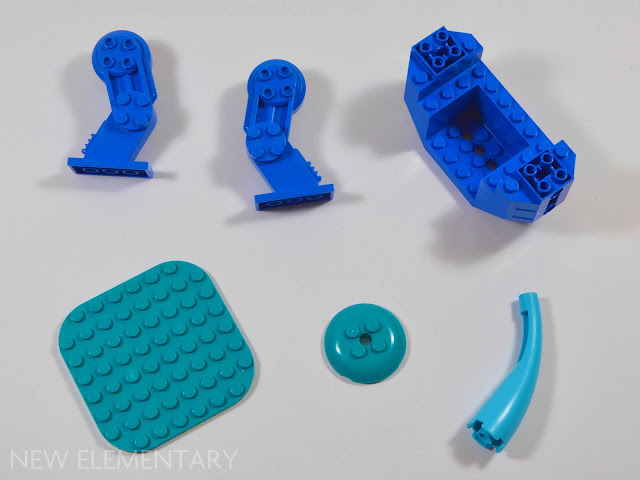 The legs are currently only available in 71740 Jay's Electro Mech. 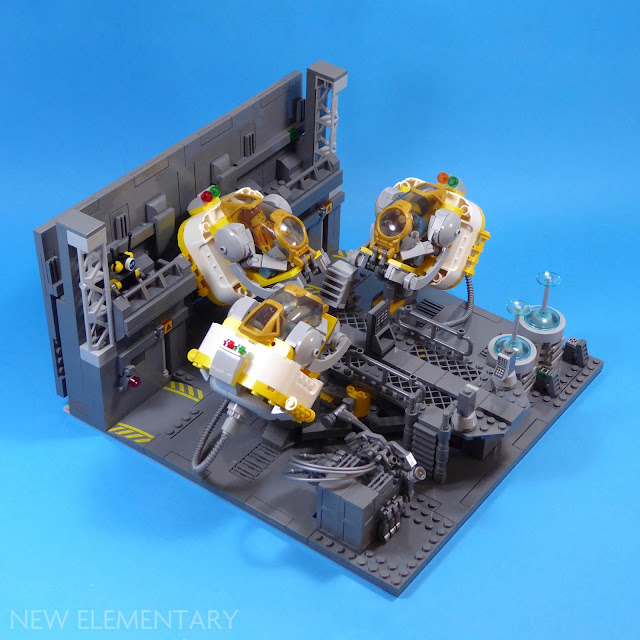 These are the sleep pods or cryogenic-freezing-suspended-animation-deep-sleep thingys (for want of a snappier more Sci-Fi abbreviation) aboard a longhaul intergalactic spaceship or something similar. 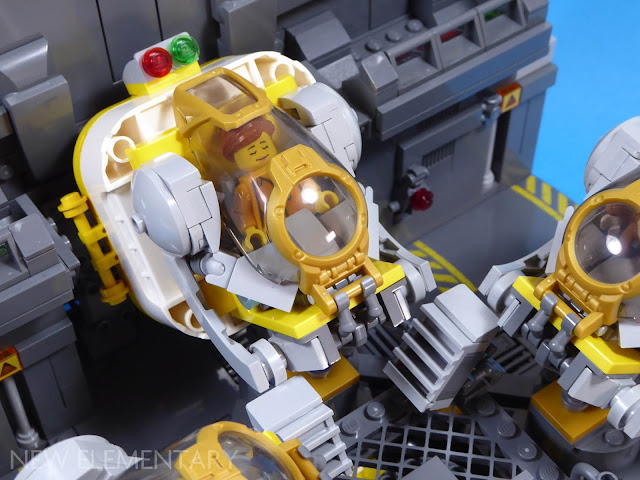 “Aboard the Oyidi V on a 7500 light year voyage to the Carina Nebula, the Robinson family are travelling to start a new life on a new world…” 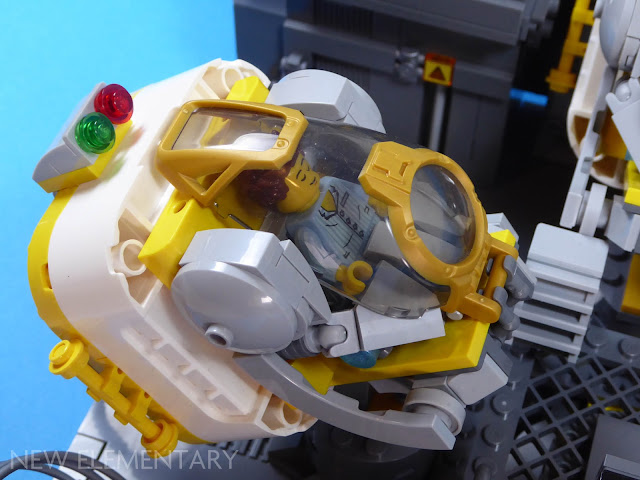 Originally I was using the transparent front part to the Vidiyo pod as the enclosures, building onto the bracket inside as I had with the Bus-a-pillar. My little boy has pretty clear ideas about LEGO and said he thought they were too similar… He was right of course! 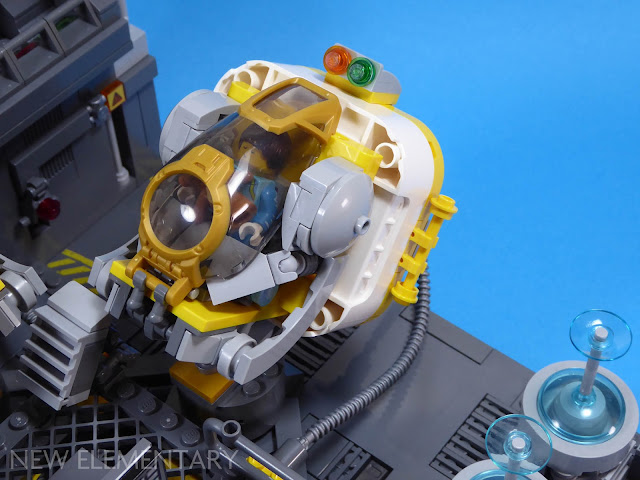 I’d previously been playing around with the dual moulded canopy (69564 | 6322113) from the 71736 Ninjago Boulder Blaster and had wanted to make one into a hibernation pod. I built two versions of the hibernation chamber, one using the Vidiyo pod and one using the Ninjago canopy to see what each looked like - my keen eyed son was less enthusiastic about the blockier version! 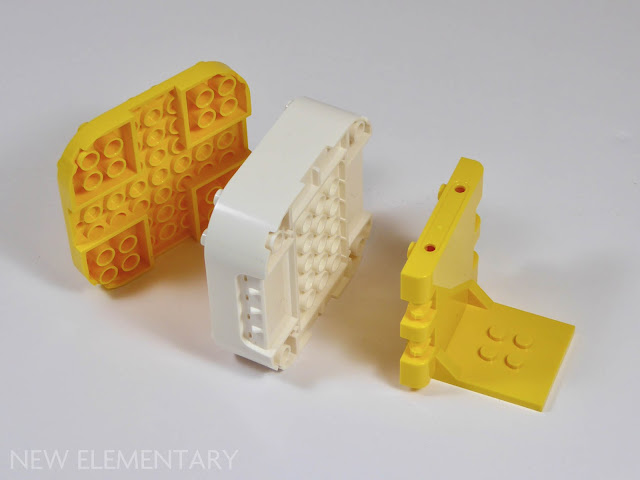 A sci-fi police ship. Initially I was inspired to try to use the mech legs to build designer Syd Mead’s spinner from Blade Runner. As with most of these things, the initial inspiration (however great) was just a catalyst and I went my own way in the end. 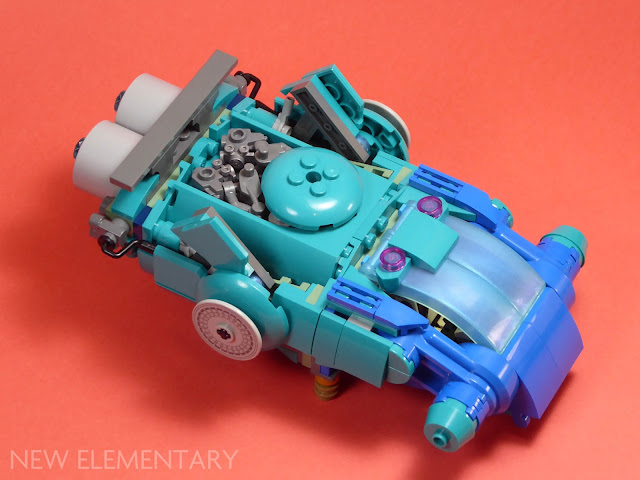 I wanted to use the pointed gothic arch piece (35565) from the Raya set in a perpendicular orientation, and serendipitously that nicely tied up with using the Mech legs in a sideways build. 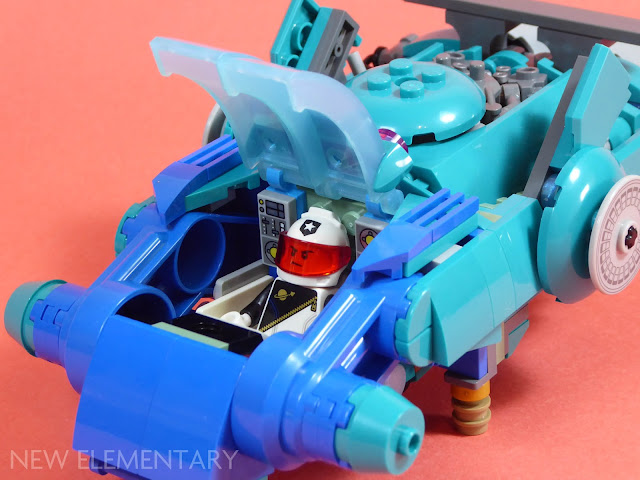 “In four minutes time a bomb would have gone off. Twelve hours ago, Inspector Ron Fewtcher apprehended the criminal mastermind who would be responsible. Time Cops - catching the criminals in our past to protect our future!” 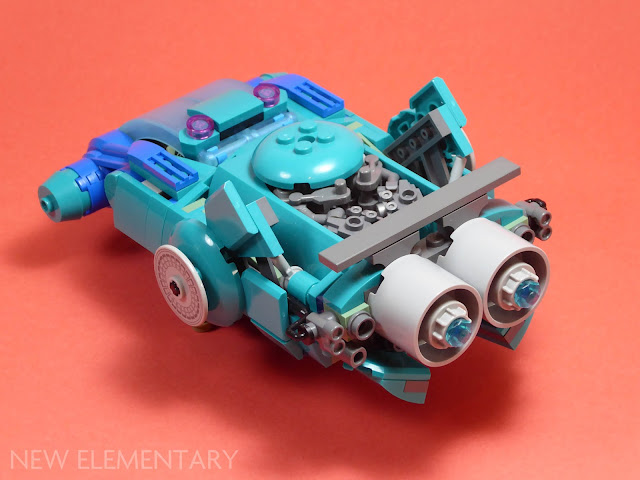 That stuff at the back might look like random greebling, but there are ‘Paradox Exclusion Buffers’, ‘Anomaly Filters’, an ‘Exposition Gasket’ and ‘Dual Clock Manifolds’. The Mechanics of time travel must be carefully engineered! 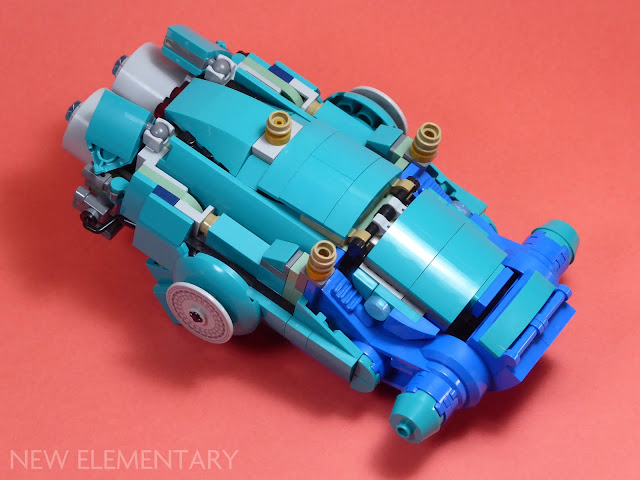 The underside of the model – what you would see as the Time Cops descended upon your lair. 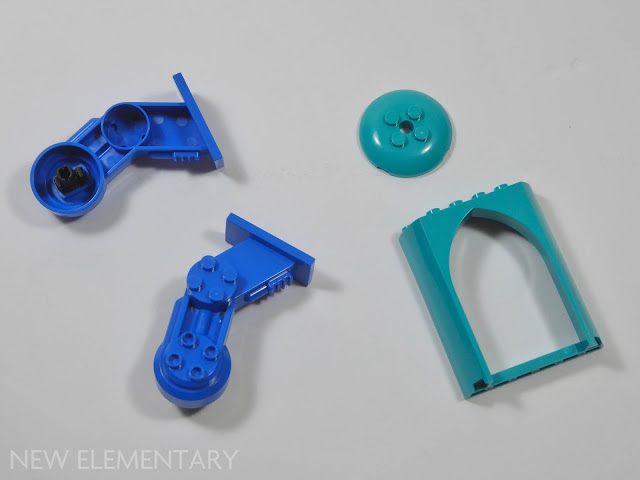 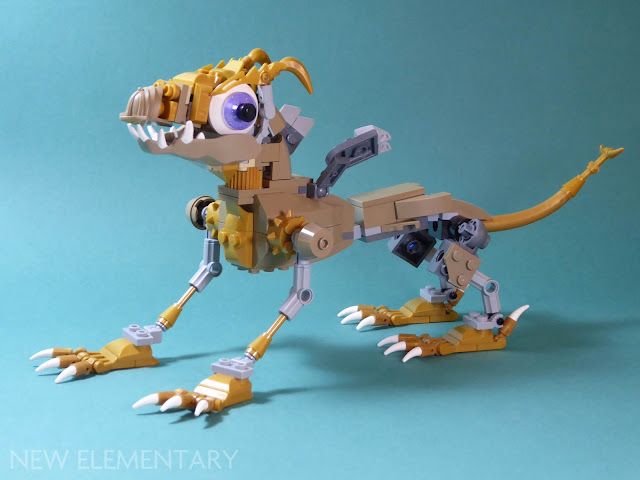 My other builds were minifigure scale; this was a conscious decision to try to build something at a different scale. I also wanted to try out creating something using that less conspicuous lower jaw from the Jungle Dragon. 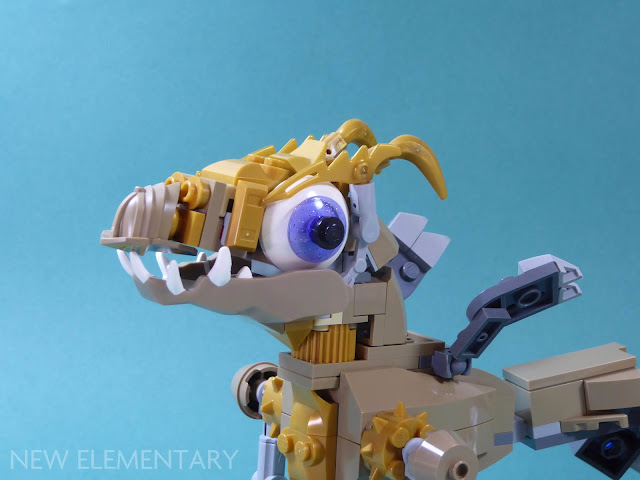 Famously, depending on which accounts you’re reading, dragons hoard gold... perhaps a bit like AFOLs hoard LEGO. What if, I reasoned, a dragon’s hatched offspring looked a bit like something ornate and gold, to ensure the parent dragon would look after it?

If we extrapolate from that, I’m not sure it’s a particularly good recommendation for my parenting skills…

Fwiw, my children don’t look like minifigures and I love them all the more for that.

The lower jaw is also available in a black and gold variant in the 71742 Overlord’s Dragon and 71755 Temple of the Endless Sea. I’m intrigued to see how many variations of this idea we will see. So far I count three styles: 72362, 72224 and 76923 - I’m impressed by the modular approach to this and very hopeful that we will see other variations.

I have presented four completed MOCs: the ones that I think you could infer the best stories from, the ones that would have promoted imaginative play in me as a child. By no means are these all the things that I could have presented. Of the five sets, I would estimate that I’ve explored perhaps a conservative 33% of the parts available in the sets, mostly trying to focus on or incorporate the newer moulds and recolours. I’m sure I have barely scraped the surface of possibilities.

My table was littered with a lot of abandoned table scrap experiments, half-built concepts and other ideas that have not progressed past the “oh, that’s interesting” phase. Our Medium Azure and Vibrant Coral patrons can enjoy one of my better ones today!

I’m sure my fellow contributors could tell similar tales. I have seen some of the wonders that they have produced and if you haven’t seen Caz's creations yet, please check them out, you will not be disappointed! Oh, and do keep coming back every Friday this August, or you’ll miss seeing the remaining jaw-dropping things!

READ MORE: The new LEGO parts for August 2021: what are they? And which sets contain the most?

Posted by: Admin Posted on 8/06/2021 07:49:00 am
Email ThisBlogThis!Share to TwitterShare to FacebookShare to Pinterest
Labels: MOC, Ninjago, Parts Festivals, Vidiyo