Aron Gerencsér (@_pohaturon) not only kicked off our rubber band holder parts fest earlier this week, he also created MOCs for our 5x5 fest! Let's see what he came up with using a selection of interesting new parts released in 2021. 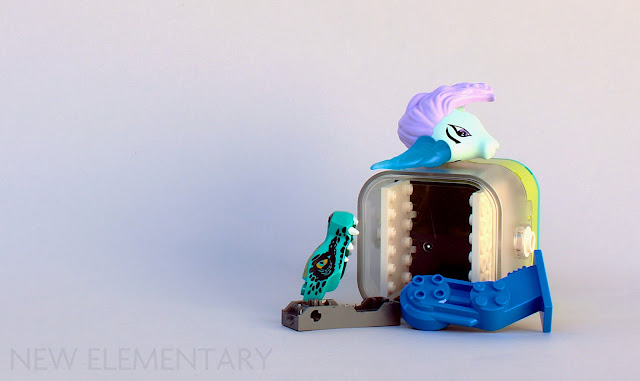 Recently I got the chance to team up with four other builders to dive into five new-ish LEGO® sets, dig into all the fancy new pieces and craft MOCs showcasing the most interesting specimens.

Other notable elements were Plane Bottom 4X12X4, W/ 4.85 Hole in Blue (6323471|44665) which is a new colour of the part explored in depth (pun fully intended) by Tim Goddard in his review of 60263 Ocean Mini-Submarine, and‘the ‘maxaroni’ Design Element, Deg.135,W/ Crosshole in Medium Azure (6322807|65473) from the Last Dragon set. The flexible plastic elements forming Sisu’s tail and… is it fur? Wings? Whatever it is, these were also standouts, alongside all that teal in the Jungle Dragon. I was working with a top tier selection of parts!

The new moulds found in the VIDIYO BeatBox are spectacular, and definitely deserve a few words - luckily for me, Caz Mockett, also participating in our 5x5 activity, already provided a fantastic examination of these strange new pieces in her original review. The only thing I can add to that analysis is a specific kind of connection I worked out which then got utilized in one of the MOCs built for this article.

While it’s difficult to remove the white Turntable, Female, W/ Snap (6317514|65146) inserts from the trans-clear Box Front 8X8X5 ⅔ (6317507|65128), it is possible. Or just don’t put them in in the first place. This grants access to an oddly shaped hole that doesn’t offer functional connections with any other elements on its own. 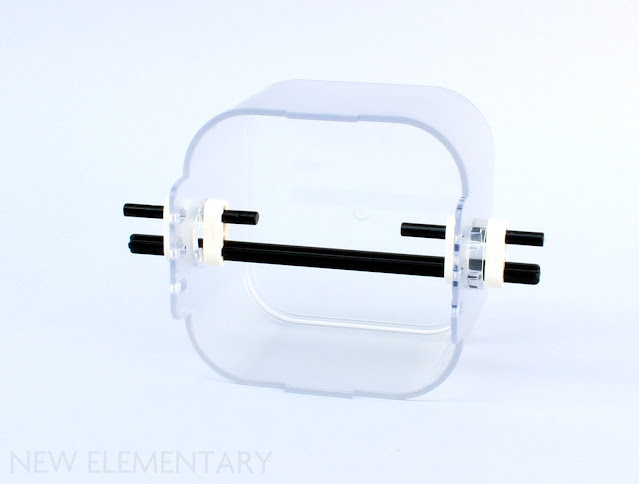 However, using a Technic axle of any length, a 3.18mm bar and two Technic Lever 2Ms (41677), you can get a very sturdy little substructure that takes all manner of bar and axle connections while being utterly secure and solid. For my purposes I put a longer axle all the way through and connected it on both ends. 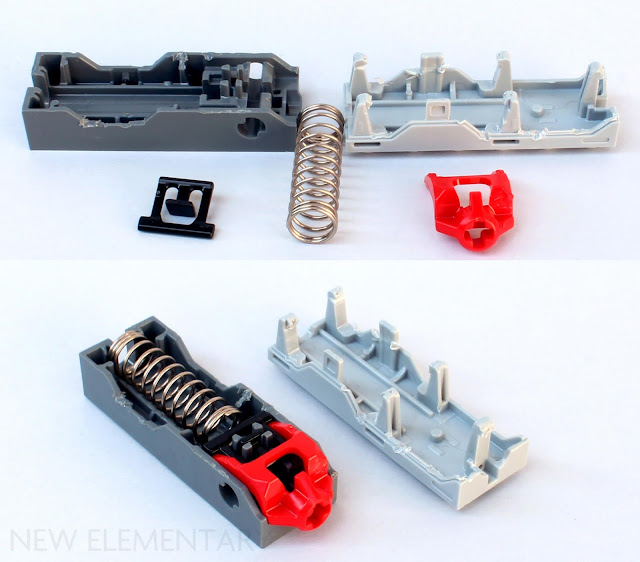 One last thing I did before moving onto the builds themselves was to disassemble the Brick 2X6X1 1/3 w/ Shooter (49743) found in Jay’s Electro Mech - read more on the development of the launcher itself here in our interview with the Design Director of the LEGO Element Design Team - finding a few bits and bobs that might be useful for technical detailing, and most importantly, a purist spring. My power is now infinite.

The grey chassis got a bit knackered, but now equipped with the necessary experience I’m confident I could disassemble these without any aesthetic damage. Of the internal components, only the red trigger piece has a connection point: a single clutchless axle hole.

We opted not to restrict this activity to just the parts found in the sets. While I did choose to go for designs that each highlighted the use of parts from one of the sets primarily, I still freely mixed and matched the parts selection and tried to use as many of the parts from these sets as I could. Without further ado, the MOCs!

The legs on Jay’s Electro Mech immediately screamed “rock-em sock-em robot” to me from the moment I saw them. This is the build that came together the fastest, admittedly using fairly simple techniques, but if it works, it works, right? 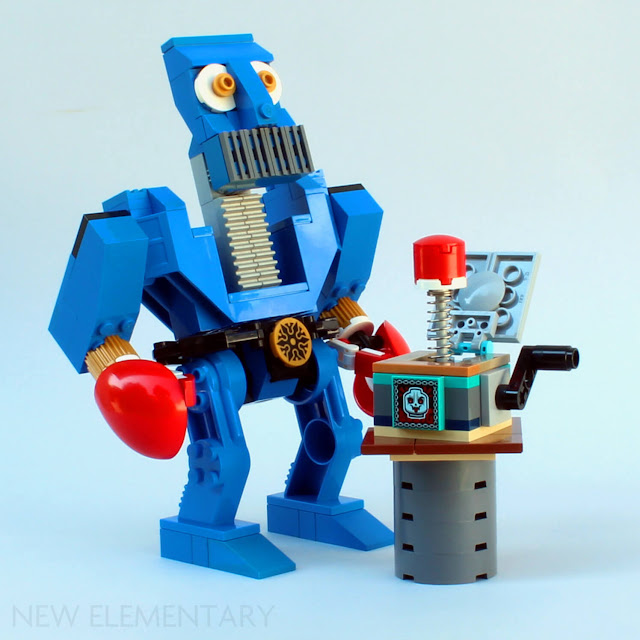 The small trick-box knocking out the robot uses that spring I retrieved from the launcher element, however while it wasn’t designed to be in-system for understandable reasons, a single bar was needed inside for stability. One of the printed Vidiyo tiles found its way onto the box as a decoration.

Working with 4 sets instead of 5 had me do a ‘repeat’ of an element that gets to be the center of attention in the MOC, and the Vidiyo pod was what inspired me most. Sticking to the intended construction using the entire pod, complete with the rear section and carrying strap, I went with this little sci-fi punk hooligan. 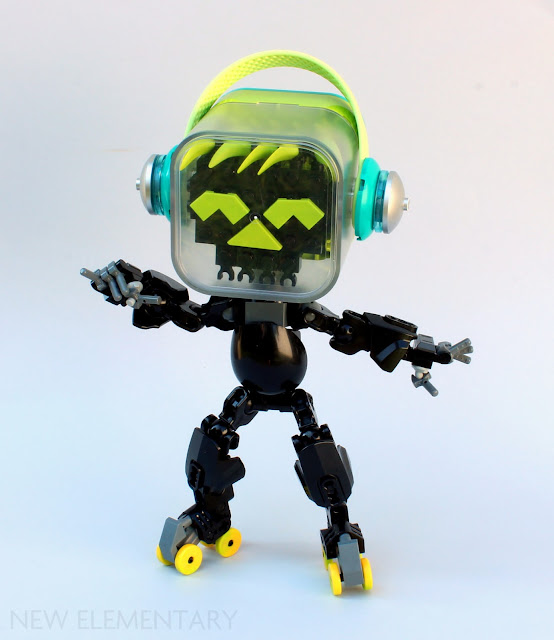 Fitting a head inside the pod was the most creatively challenging task when building this MOC. My initial idea was having a sort of dot-matrix screen face for a “TV head” effect, but going with the flow while building led to this skull design instead. Between the teeth and hair, it really maximises the space inside the pod. For those of you wondering, the wheels on his roller skates are comprised of Disc Ø12,9 (53993) found in Exo-Force and Mars Mission sets as launcher ammo.

I’ve been getting good mileage out of the technique of affixing various small, usually 1x1 elements on Shoulder Shell W/ 3.20 Connector (21560) with rolled up stickers to maintain purism. This face style, combined with the head of the Jungle Dragon (a new mould!) as a headdress set me on the path of a sort of shamanistic character build, mainly using elements and designs seen in the Jungle Dragon set. 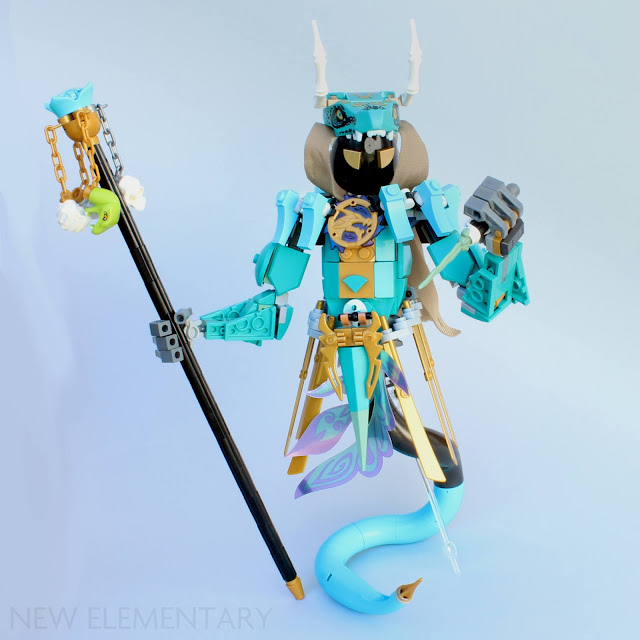 Way too many hours spent murdering Naga in Stranglethorn Vale during my World of Warcraft years inspired the serpentine lower half (and name) of this moc. Unfortunately the number of Medium Azure maxaoni was insufficient, so I had to buff out the tail with some gunmetal ones I previously used in a circuit of MOCs built using parts from Monkie Kid sets.

The delightful irony of Spike 2X8 (6325523|61406) appearing in teal - following a previous appearance in purple in the Exo-Force set that famously ‘killed teal’ for a while - meant I couldn’t miss out on using it, and the tail decoration from Sisu also came in handy.

Fun fact: this was the first MOC I built for this activity and, as my fellow New Elementarists will attest to, came not long after lamenting how I should “build more stable MOCs”. Ha.

Turning stuff I get from New Elementary into Bionicle is an on-going obligation of mine and now is hardly the time to stop. 43184 Raya and Sisu Dragon is full of pretty pieces in various shades of blue, including Brick 1X3,Outside Half Arch ,W/ Cutout in Medium Azure (6320292|70681) and Flat Tile 2X3 W/ Angle in Transparent Light Blue Opal (6339228|35339). 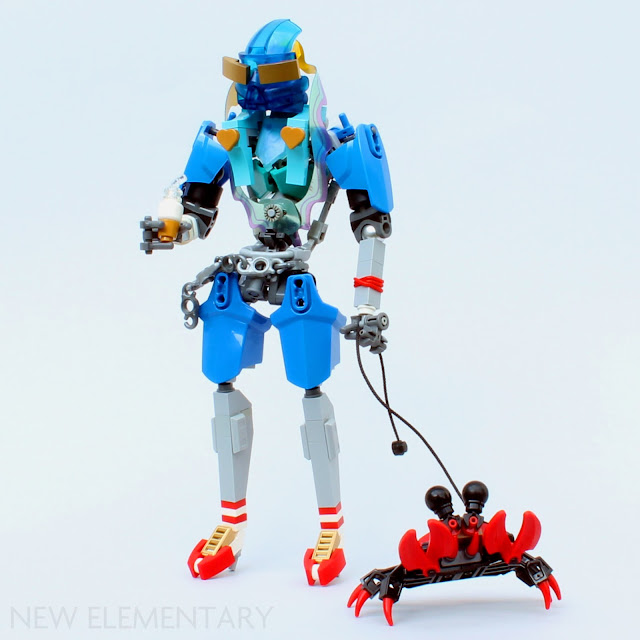 I was determined to put these eye-catching elements to use alongside the other plastic ornamental part from Sisu in creating an approximation of what a designer outfit would look like if you are an elemental techno-organic lifeform. The crab is just there because I like crabs.

Third in a series of MOCs I've created for New Elementary following a similar design pattern - the previous two have appeared in my Monkie Kid MOC article linked above, and this week's launch of our Forbidden Elementary parts fest about rubber band holders. Puli uses the same axle, bar and liftarm-based connection with the Vidiyo canopy I outlined at the beginning of the article. Highlights here include the use of the ratcheted platform the Vidiyo minifigure and included BeatBits are stored on as a sort of radar dish, and - though this angle doesn’t show it off - the lower half of the disassembled launcher piece on top of the weapon as technical detailing. Another older, obscure piece popped up here too - the weapon barrel is comprised of a pair of Column 2X2X8 in Black (4153019|30646), which only appeared in two Jack Stone sets.

Having played around with these parts a bit, I’m pretty confident that - unsurprisingly - it’s the less specialised pieces found throughout the two dragon-y sets that I’ll get the most mileage out of, however I’m determined to use the rock-em sock-em leg moulds as something other than a leg sometime, and I’m sure the Vidiyo pod still has some unrealised MOCs in it. Who knows, maybe these will cameo in future New Elementary articles…?

Posted by: Admin Posted on 8/13/2021 05:46:00 am
Email ThisBlogThis!Share to TwitterShare to FacebookShare to Pinterest
Labels: MOC, Parts Festivals