Sustainable LEGO® bricks: will Recycled PET be the end of ABS? 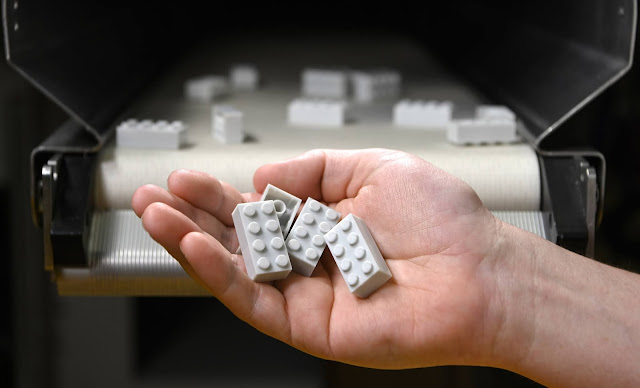 The LEGO Group have released a progress update on their efforts to eliminate the environmental impact of making LEGO® bricks, and New Elementary have asked them some questions about it. You will recall they’ve been testing various plastics made from sustainable resources for several years now, and although they don’t yet have the solution, today they have revealed the first brick made from a recycled material that meets the company’s strict quality and safety requirements – as well has having the all-important correct level of clutch power! That material is recycled PET (rPET) from discarded bottles. Each 1-litre plastic PET bottle provides them with enough raw material to make 10 LEGO 2x4 bricks, on average.

The LEGO Group (TLG) has a team of more than 150 people working on sustainability solutions and in 2018, their Plants from Plants campaign revealed they were already using sustainably sourced bio-polyethylene (bio-PE) to mould botanical elements. These only account for 2% of the inventory of 3,600 elements available to the product designers, however.

They actually first looked into PET quite a while ago, and those of you who have been to LEGO House may have seen examples on display. However they then had to look for a partner to proceed with, which took a while but once they found them, they really got going. Now, 2 to 3 years on, the materials scientists and engineers have tested hundreds of plastic formulations, including over 250 variations of PET materials.

The formulation developed by TLG uses a patent-pending compounding technology to combine rPET with strengthening additives, increasing the durability enough to be used for LEGO bricks. This PET formulation might not end up being the material used; they will continue testing and developing it and only then assess whether or not to actually move to a pilot production phase – so it will probably be at least 18 months before any sort of consumer testing, and a matter of years before you might get one in a set.

As a material, normal rPET without their special additives wouldn’t work for LEGO bricks. The clutch power is way too strong – you couldn’t even pull bricks apart – and it’s not very sturdy, so it wouldn’t be very safe. If you put too much weight on bricks made with normal rPET they break with sharp points, which is dangerous. Durability is also very important, including after years of use and storage; they noted at high temperatures, the clutch power of normal rPET decreases and the bricks separate. Another aspect you might not have thought of is that they need the surface of bricks to remain glossy even after they’ve been cleaned.

TLG’s ultimate ambition is to make LEGO bricks from sustainable sources by 2030 without compromising quality or safety. It’s a challenge, but that’s still what they’re aiming for. Their definition of a sustainable material is “one that is responsibly produced using renewable or recycled resources, that generates little or no waste, uses sustainable chemistry and is fully recyclable at the end of its life”. To ensure the quality of their rPET, TLG are currently sourcing it from suppliers in the United States whose processes are approved by the US Food & Drug Administration (FDA) and European Food Safety Authority (EFSA). They realize that in many countries PET is used less and less, and they intend to keep working on different materials (even after 2030, that won’t be the end of it) to be sure to be able to continue evolving and refining.

Interview with the LEGO Sustainability leaders 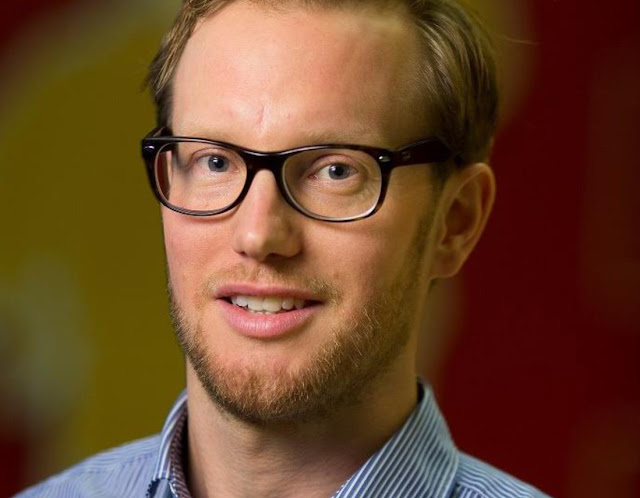 Francesco Spreafico from New Elementary along with 5 other Fan Media took part in a Q&A session about this announcement with Vice President of Environmental Responsibility at the LEGO Group, Tim Brooks (above) and Nelleke Van Der Puil, Vice President of Materials. Nelleke is responsible for the plastics used in your bricks, as well as the colours and the inks that are used for the decoration on the elements.

Our first question was perhaps the most obvious one.

New Elementary: People associate ‘recycled’ with ‘bad quality’. Even with your Plants from Plants campaign, people said “We don’t want biodegradable bricks”, even though you specifically mentioned several times that they’re not biodegradable. How are you going to deal with this marketing challenge?

Tim Brooks: I think it's a good question. I think many people are still emotionally scarred by recycled toilet paper 20 years ago! Okay, maybe it's not just emotional scarring. I think they don't have to be low quality, if you look at PET bottles now it would be hard to tell the difference between a recycled PET bottle and a virgin PET bottle, there are many leading brands out there who are doing that and I think it’s the same in a lot of packaging and product applications. There are leading premium goods manufacturers out there who are using recycled materials. And most people wouldn't know that. One of the things we want to find out from the prototype is how people view recycled materials, what they like about them, what they want to see in a recycled material. But ultimately, we believe the future for our portfolio is going to be a combination of recycled and bio-based material and we've been pretty clear about that from the beginning.

Many people will also assume these are cheaper to produce?

In the short presentation you just gave  us, you said that you are yet to test colouring, but if this does become a real product, do you think that rPET will be able to match the existing LEGO colours? Because, as you probably know, we fans are very passionate about colours so if there's going to be even a little change that is probably going to be problematic!

Nelleke Van Der Puil: I can try to answer that to the best of my ability at this moment, because one of the reasons why we have taken as many as 250 iterations was because of making the colouring possible at all. We had to add a lot of additives to the plastic in order to make it suitable for the application, and as safe as it is now, and also amenable to moulding. By adding all these additives, you would also impact the colour. So what we're seeing today is that we definitely do not have the formulations to get the right colouring, and we will have to work with our colour developers. Those are companies that are supplying our colour stain. That will be one of the challenges and we know that we are, of course, working against very high targets. And we love our colours as well! So yes, we have to make that right. I cannot guarantee you a promise! It's a matter of developing and it's a big challenge.

Can this plastic be used for transparent parts too? And if it can, would it be better than the current ‘foggy’ new material you’re using now?

Nelleke: So it's interesting that you mentioned it's foggy, because we actually use a material which is called ‘low haze’ and so, in fact, we don't find it that foggy. But this [rPET] is not going to be suitable for transparent parts. The reason for that is that we have to put all these additives in to make it suitable for the building function, and as safe as our bricks are today. So we won't be able to keep the transparency, unfortunately, we'll have to look out for other materials here. Very good question! 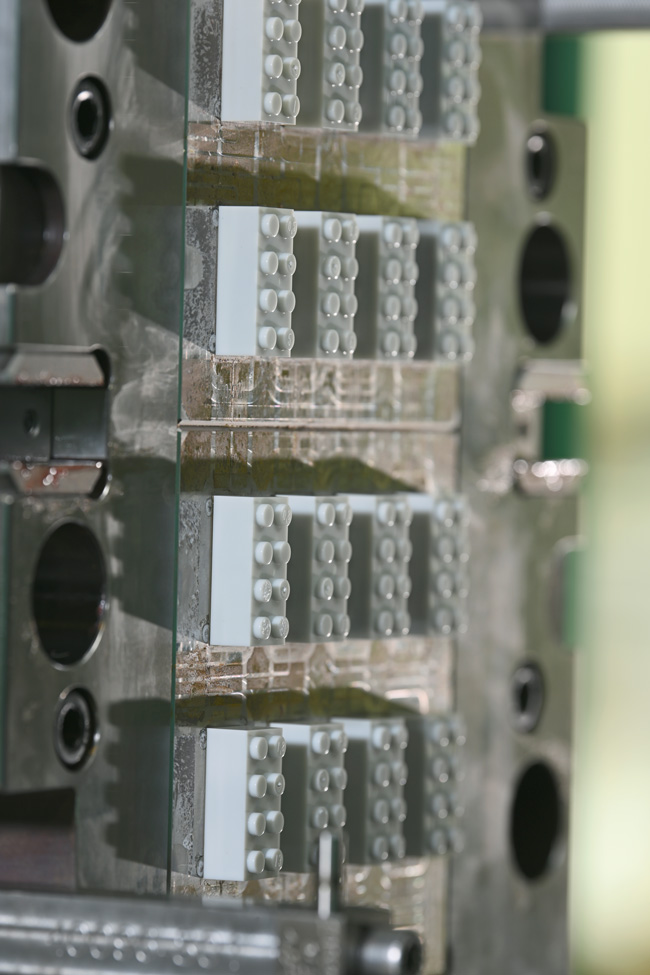 Moving on to moulds, is the goal to reuse existing moulds or will you have to make completely new ones for this new material?

Nelleke: For each new material we have to make new moulds. So you can imagine that it needs a huge effort. And that's why, also if we would really transition into these materials on a big scale, it's going to take a very long time.

Right now, you use different formulations of ABS to get different kinds of rigidity in parts, like clips that have to accommodate bars for example. Will this new plastic be able to do the same?

Nelleke: The different functionalities will most likely not be covered by one single plastic. Now we have ABS, of course, which covers a lot of functionalities, and we have 20 other different plastics that we apply in our own production. So we think rPET will cover the knobs and tubes [i.e. stud to anti-stud connections]; that is the starting point and of course we will expand and see what we can do to the design of the elements. That is one thing I wanted to mention; you probably know that there are many different varieties of the 2x4 brick, I think we have 80 designs of a 2x4 brick, even though if you looked at the design you wouldn't notice. So we’ll have to make minor changes in the mould in order to make it fit. Element design is something that we can work with, and we will do what we call “robust element design” with these new materials, and then we'll have to see how far we can stretch the application of this new material to the existing functions.

Check out our sister sites Brickfinder, BrickFanatics, Jay’s Brick Blog and Hothbricks and magazine Blocks in the coming days for more questions that were asked! Our thanks to Sara Skahill and the AFOLET team for organising the interesting roundtable discussion.

All text © New Elementary and images are ©2021 The LEGO Group unless otherwise attributed.

Posted by: Admin Posted on 6/23/2021 01:00:00 pm
Email ThisBlogThis!Share to TwitterShare to FacebookShare to Pinterest
Labels: Inside LEGO, Interview