Zachary Hill (@zaxbrix) swooshes back to 2020 today with a review of LEGO® Star Wars 75286 General Grievous’s Starfighter. Buying this set? Consider using our affiliate links, New Elementary may get a commission: UK LEGO Shop | USA LEGO Shop | Australia LEGO Shop, for other countries 'Change Region'. Products in this article were provided by LEGO; the author's opinions are their own.

The Star Wars galaxy is filled with unique starships to suit each owner and ruthless droid army commander General Grievous is no exception. Star Wars Episode III: Revenge of the Sith cinematically introduced the General’s ship while The Clone Wars gave the arch-clanker’s starfighter even more screen time. Chronologically in Star Wars the ship was last seen after the tense battle of Utapau, which claimed the last bit of life left in Grievous’s cyborg body and forced Obi-Wan Kenobi to commandeer the ship to escape the incivility below. 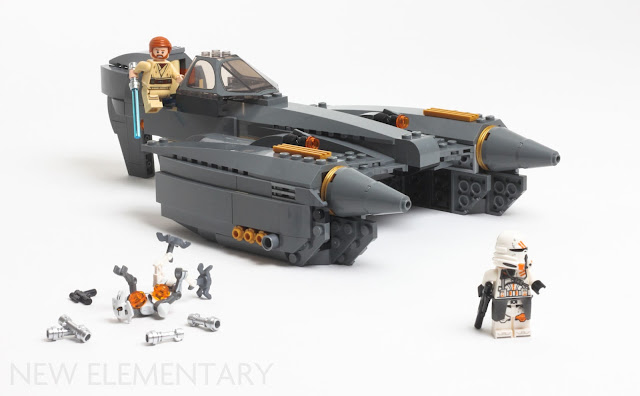 The set features a cast of three Episode III minifigures and 487 pieces for a price of US$79.99 / £74.99 / 79.99€. We can skip the math - that’s a pretty steep price per piece, especially considering there are few unusual elements in this set and earlier versions were more affordable. A collection of large grey slopes and plates might be useful to some of you, but the price could be a hard stop even for fans of arch-clanker Grievous.

The Build and Features

The grimly-named starship Soulless One was introduced in 2005’s prequel trilogy finale Revenge of the Sith - two years later Grievous and his ship were available for the first time in official LEGO form. 2010 introduced the second Soulless One, a doubly-larger set which kept the ship’s key design features intact, while Grievous’s minifigure was remade entirely with new moulds and printed details. 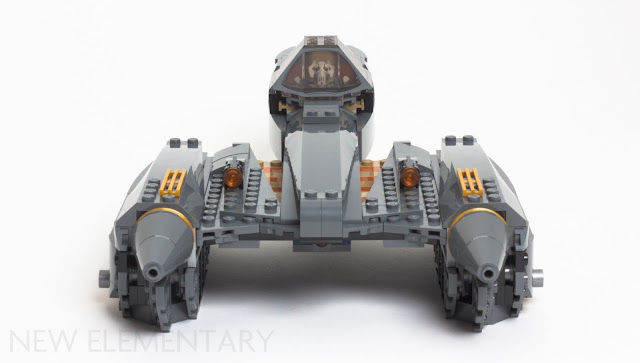 Ten years have produced plenty of new elements to update the Soulless One with a few new tricks and colours. This - ahem - grievous ship has been updated with a warmer colour scheme thanks to modern Warm Gold/ Pearl Gold and Dark Orange accents. Those gold engine accents add more colour than the ship features on-screen, but the dark orange and dark tan tiles are spot-on. 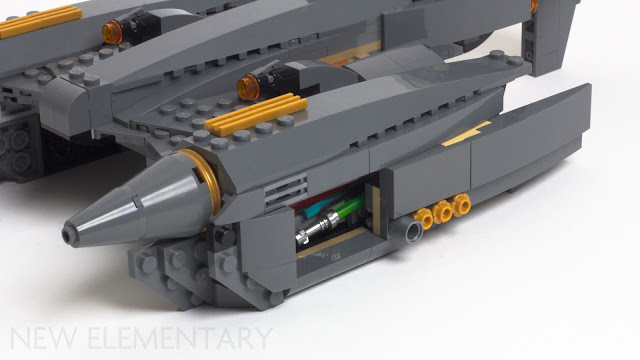 The thumping engines are the most visible update from the 2010 version, which are now wider, show less studs, lack stickers, and have larger opening compartments to serve as storage for the General’s fine collection of stolen lightsabers. A mechanism of a clip (63868) and locking hinge brick (54671) come together with a satisfying small click to latch each door. The ship’s triple rapid-fire laser cannons are represented by two stud shooters atop the craft and a spring dart launcher centred on the underbody, each with its own assortment of ammunition. I’ve been keeping that arsenal’s ammo in the storage space in addition to the lightsabers but doing so makes it a challenge to close the overstuffed stowage.

Each nacelle houses a grey grooved 2x2 brick (90258), a red axle-holed 2x4 brick (39789) introduced in LEGO Education SPIKE™ Prime sets, and a white 2x2 round plate (4032) which provide Technic-to-System connections. Those shallow 2x2 plates were used in both earlier models to provide every Technic connection - the thickness of the brickness inside 2020’s version makes a definitely more solid connection. This stability comes at the cost of storage space though, and it’s easy to snag the door on a lightsaber hilt in these tight quarters. 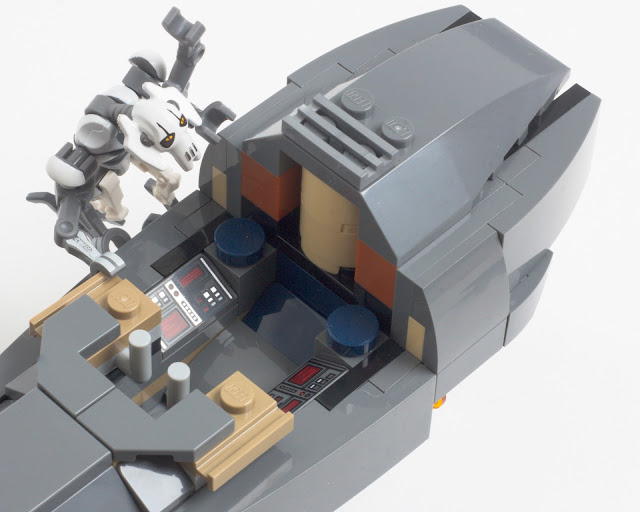 The cockpit area makes use of relatively new sloped bricks to taper the ship’s sleek shape on the outside, while the inside is completely updated with printed control panels (85984pb127) and two stationary upward bar plates (4623b) forming the flight yoke. Price notwithstanding, I prefer the current design in every area except the yoke - 2010’s model featured a Technic flexible double axle connector (45590) allowing the yoke to be wiggled around. Due to the similarity to the 2010 ship design, there’s a perfect amount of space to replicate this yankable yoke if you have a spare Technic flex connector and a few common parts. 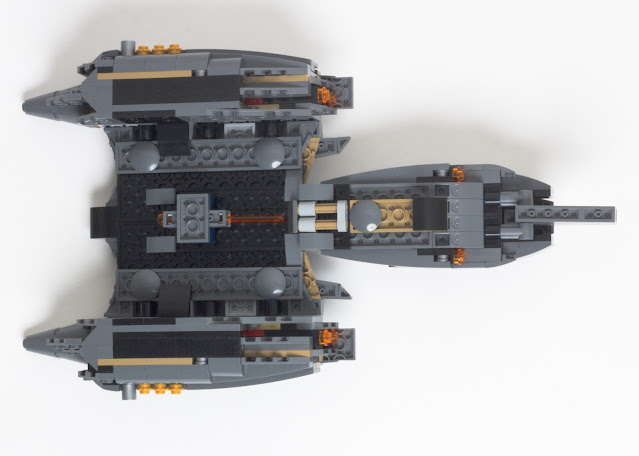 The underside reveals the layers of plates making up the skeleton of the cowardly General’s Spineless One, er, Soulless One. The sliding Technic assembly extends the dart launcher’s trigger aftward, but it’s easy to accidentally fire without leveraging the black slope far back under the cockpit. 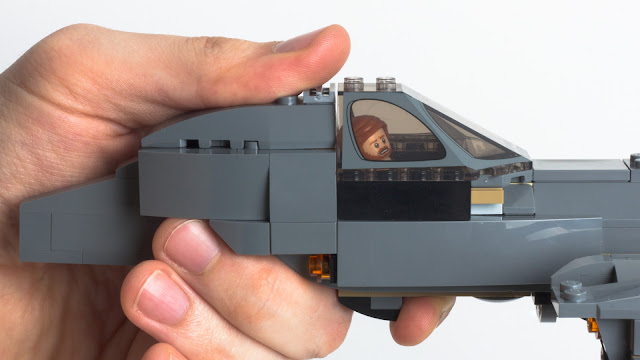 This small hardpoint gives my hand enough grip to solidly swoosh through the air without accidentally firing that hair trigger every time. Until I realized this feature’s use, I spent more time than I’d like to admit crawling on my floor seeking lost missiles! 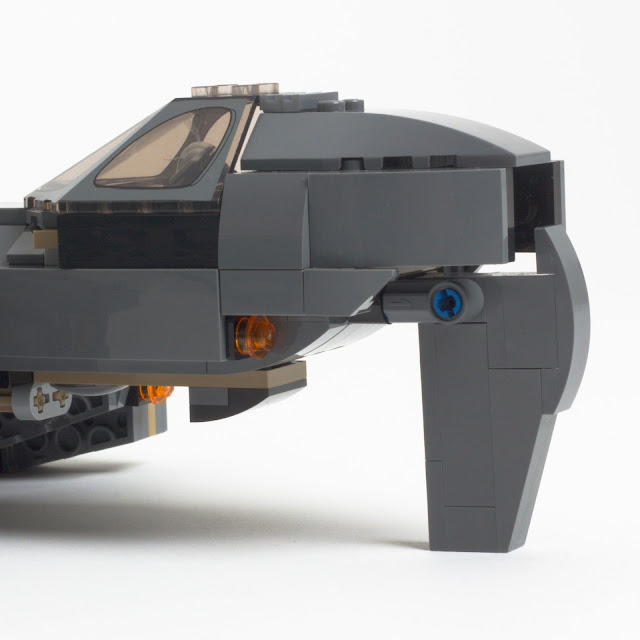 Lastly the combination landing gear/rudder keeps its simple design with a Technic friction pin forming the axis of rotation. A position detent such as that used in the original 2007 model’s landing gear foot would be welcome, but little weight is placed on the landing gear when the ship is parked. 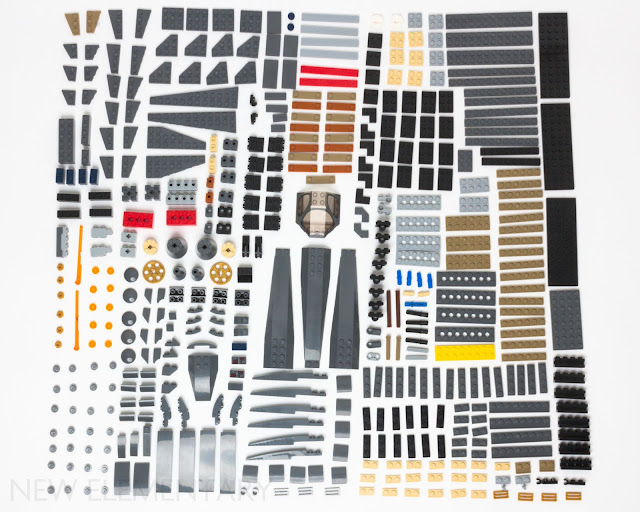 Since Grievous’s grim spaceship is dark grey from tip-to-tail, it’s no surprise 39% of the set’s 487 elements are Dark Bluish Gray (DBG). Some common parts such as the 16x4 triple wedges, 3x3 wedge plates, and nose cones keep their perfect attendance record in this ship’s LEGO lineage.

The new generation of Grievous’s Starfighter takes two existing curved slopes into the exciting world of DBG. Still unique to this set, four long recoloured 8x2 curved slopes (6302685 | 42918) gently taper the sides of the cockpit and the storage compartments’ doors. When this shape was new in 2019, Jonas Kramm noted these 8x2 slopes have the same profile as 10x1 slopes. Six of said skinny slope siblings are included in the set - and you’re right, they’re DBG.

While ten sets now contain this stout slope in DBG, Grievous’s Starfighter was among the first to include it. No other sets have included as many - eight slopes make up the bottom outboard edges of the fighter’s engines. 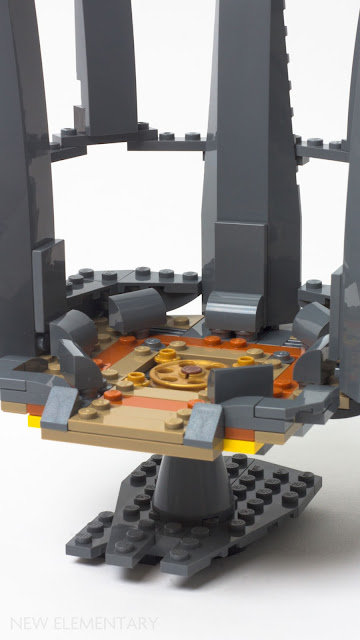 While shuffling these about they seemed like good midi-scale seats, so I used only pieces within this set to build a small Jedi Council Chamber. If you’re looking for fond memories of this room, you might want to try a different movie than Episode III.
A single printed element is unique to this set: Windscreen 6 x 6 x 2 Canopy with SW General Grievous' Starfighter 2020 Pattern (87606pb06) is an updated version of the windscreen introduced in the 2010 Starfighter. 2020 updates the design with crisp borders in place of dithered edges and a longer top window.

Three characters from the uncivilized duel between Obi-Wan Kenobi and General Grievous on Utapau in Episode III: Revenge of the Sith come with this set. My personal favourite goes to the 2nd Airborne Clone Trooper. The battle gear of this trooper has highly-detailed printing on the feet, legs, and torso. His midsection features a traditional Mandalorian armour skirt called a kama uniquely recoloured in DBG. Apart from the uniqueness of this figure, I love the role this character played in Obi-Wan’s history: because of the clone’s misplaced confidence, Kenobi was able to narrowly escape the tightening clutches of the Galactic Empire.

One bold battle-damaged Obi-Wan Kenobi makes his second appearance since 75269 Duel on Mustafar introduced this figure earlier in 2020. The pockmarks on his robe aren’t exclusively from the lava planet Mustafar - by the time Kenobi commandeers Grievous’s Starfighter, he’s been betrayed by his clones after chasing down a cyborg while riding a dinosaur. At this point, anyone would need a change of clothes for one reason or another!

Unlike the first two figures Grievous isn’t new; his complex minifig in white armour was introduced in 2014 with 75040 General Grievous’ Wheel Bike. Brick Yellow/ Tan armour covered these same moulds in The Clone Wars sets from 2010 and 2012. Neither LEGO colour perfectly represents Grievous’s ivory-tinted armour, but this figure’s white surfaces are noticeably brighter on the dual-moulded legs than the printed torso and arms. Without my own tan Grievous to compare in-person, I’m assuming tan is more consistent from head-to-talonlike-toe. Nit-picky imperfections aside, the figure has gravitas and I give it a warm “hello there” into my collection.

Price notwithstanding, 75286 General Grievous’s Starfighter is the best iteration of the Soulless One to date. This playset has a cohesive cast of characters to recreate some of fan’s favorite prequel-era scenes and the neutral colored parts have potential to fit into many builds, even if it’s just as a rocky cliffside. The changes from previous versions aren’t monumental but are well executed and are a fine example of how a model can improve with each release. This ship looks better than ever and is smartly built.

Price considered, however, it’s tough to justify unless you’re both a big fan of General Grievous and don’t already have the similar 2010 version of the General’s Starfighter. For those of you considering buying this set, please consider using our affiliate links, New Elementary may get a commission: UK LEGO Shop | USA LEGO Shop | Australia LEGO Shop, for other countries 'Change Region'.

Posted by: Admin Posted on 6/18/2021 03:49:00 am
Email ThisBlogThis!Share to TwitterShare to FacebookShare to Pinterest
Labels: Set review, Star Wars