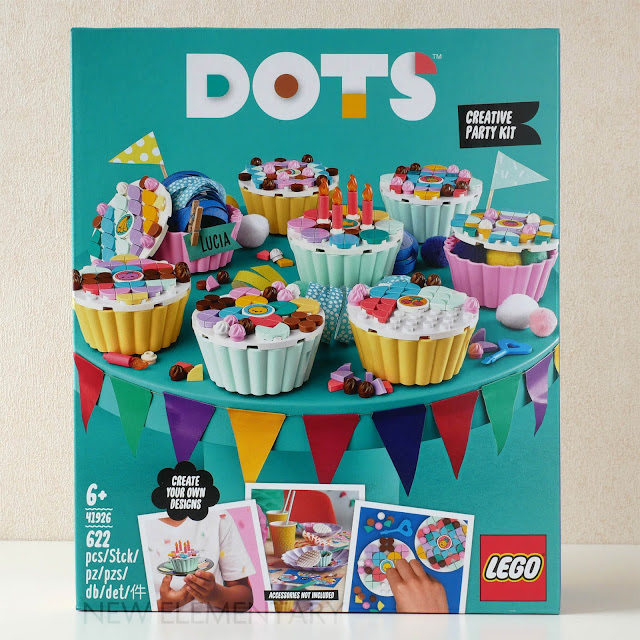 In this article, I take a look at the LEGO® DOTS Creative Party Kit, which was released in January 2021. The first thing I noticed was the box art, which I felt was perhaps a little misleading - you do get lots of lovely LEGO elements, but none of the other bits and pieces in the picture, such as the fluffy pompoms or ribbon. I know these were probably included to suggest a storage solution for party favours, but unwary parents who buy the kit for a birthday party on the basis of the box art may be a bit disappointed. It’s a minor thing, but one I felt I ought to mention. Opening the box up, we get a large bag of 8 assorted cupcake bases, one bag of candle accessories, a sticker sheet and 8 individual bags each containing a cupcake top and a selection of colourful DOTS to apply to the plate. This is a nice touch, as hassled parents, busy organising a party, won’t have to divide up the contents equally between each participant – just give them all their own bag. Let’s see what the typical contents of each are: 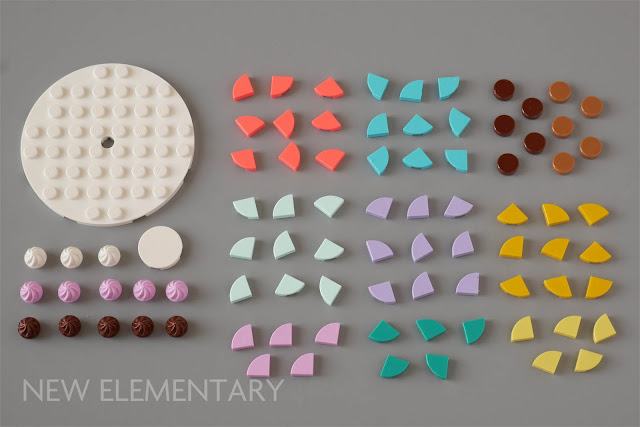 I opened one of the eight bags at random and arranged the tiles for each element. The inventory for the set shows us 5 of the quarter pizza tile colours have 8 examples per bag, and 3 have 4. It would seem from this quick count up that each of these elements also gets a spare included per bag, so you are in fact getting 8 spares of each tile per set.Similar numbers appear with the two tones of brown round tiles included. The cake decoration pieces have 2+1 for white and 4+1 for the bright pink or reddish brown examples. Along with a single round 2x2 tile for a sticker, this gives each partygoer ample pieces to decorate their cake topper - which only has 42 studs,. About 85 parts for decoration means we are getting more than enough to cover the top, twice over! 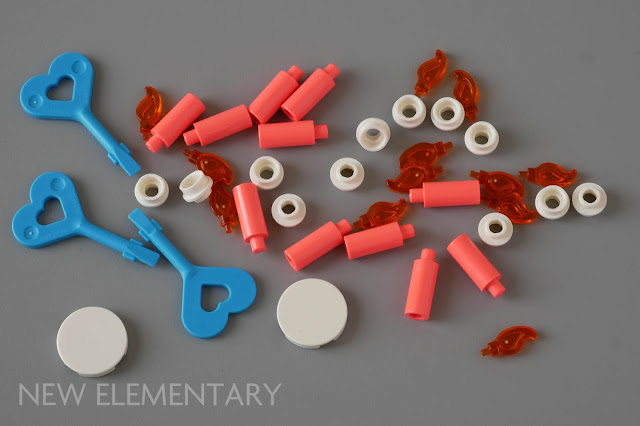 As well as the packs of DOTS, there is also a single bag which has a few recoloured candles, flames and polo plates for additional decoration. The three dark azure “keys” are actually a neat little brick separator which can get between those fiddly pizza tiles if you make a mistake in the middle of your design and you want to lift them off again. 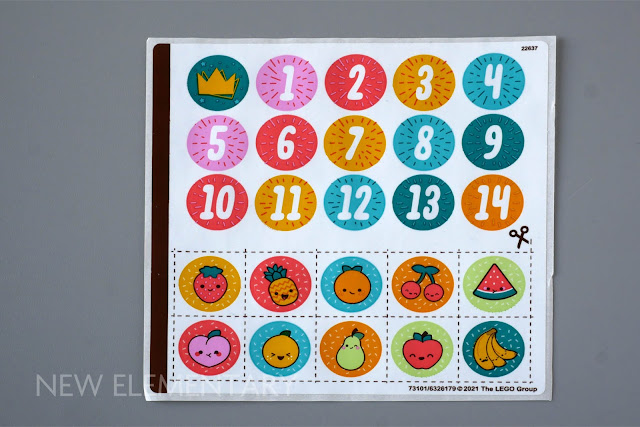 The stickers contain some fun designs of healthy fruit, perhaps in an effort to counteract all the sugar you are getting from the cupcakes? I found the numbers included were slightly odd - it’s a 6+ set so you would perhaps imagine the lowest number on the sheet to be 5 (giving a bit of leeway). There are, however, only 11 candles included, so if you are celebrating a 12th, 13th or 14th birthday you can have a sticker but not all of the candles you may be entitled to! Ah well, perhaps I’m reading too much into this... 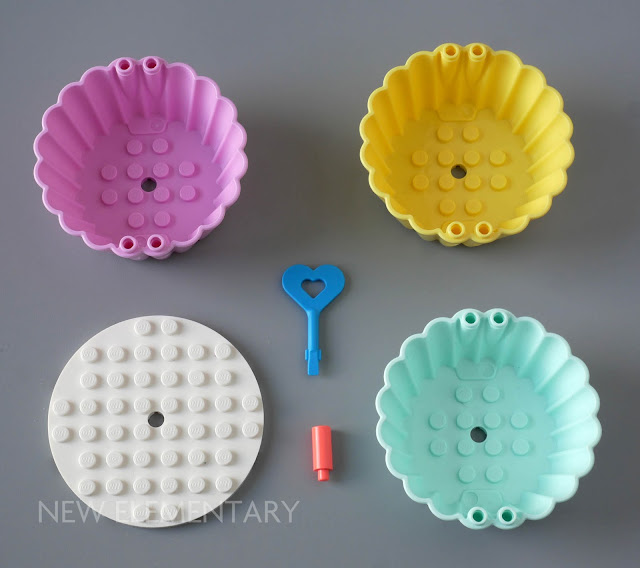 The tiles included in the set are all pretty common, but the real interest for New Elementary readers are those big, new cupcakes! Cup Cake Form 8 x 8 x 3 (72024) are unique to this set, and come in three colours: 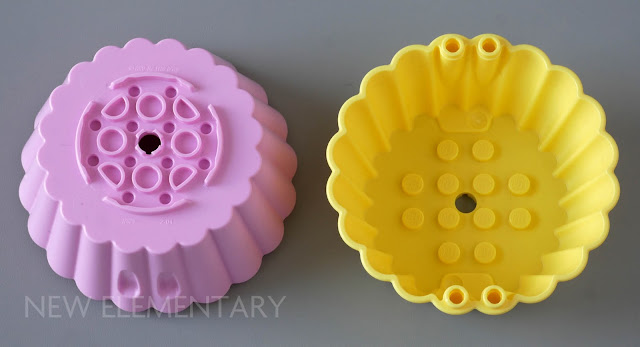 The cupcakes are an intriguing container piece, with the same pattern of studs and antistuds as a regular 4x4 round plate, inside and on the bottom. There appears to be quite a big gap around the studded area, but you will notice that the base is not quite flat inside at the bottom of the two open studs which sit on the sides of the cupcake. 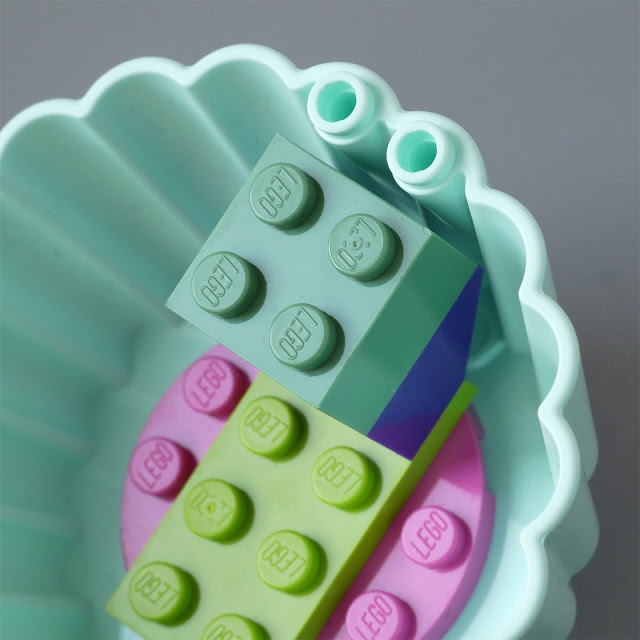 If you want to make use of the maximum volume inside, you will need to stack a couple of plates in the bottom before there is enough room for an inverted slope and subsequent brick. 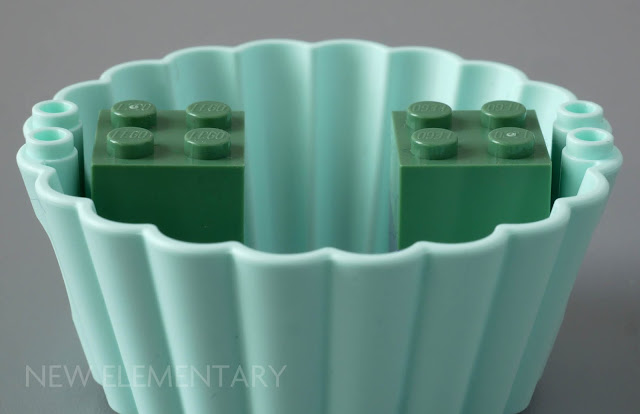 Adding internal elements like this does give exact stud-to-stud distances to the edge studs on the rim., so you can put a 2x8 plate across without issue. 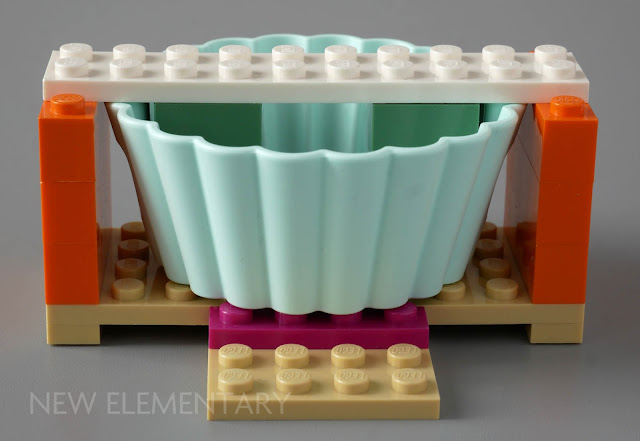 From my enclosure model above, it may look like there is enough clearance to add a tile on top of the 1x4 magenta plate underneath, to give a smooth surface for the cupcake to rest on. But annoyingly, this is not the case! 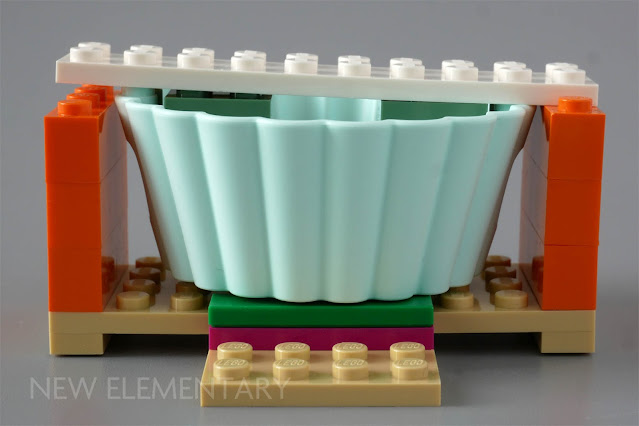 The addition of a tile underneath pushes the cupcake up far enough so that the geometry is out at the other side of the 2x10 plate - and the clutch of the cupcake base isn’t really sufficient to hold it down, even if the top plate isn’t applied. So if you are going to incorporate this element into your builds, it will have to be sitting on bare studs. 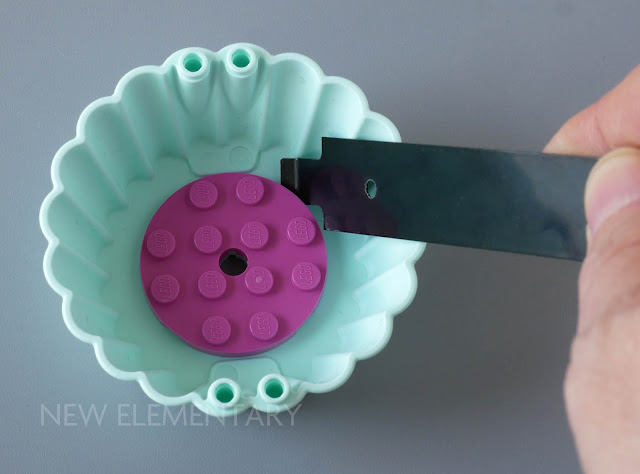 One minor caveat if you plan to put a round plate in the bottom of your cupcakes - you can’t poke them out again from underneath, because they also have a round hole in the middle! So I had to resort to alternative means to free this one after I had taken the photos. Oops. 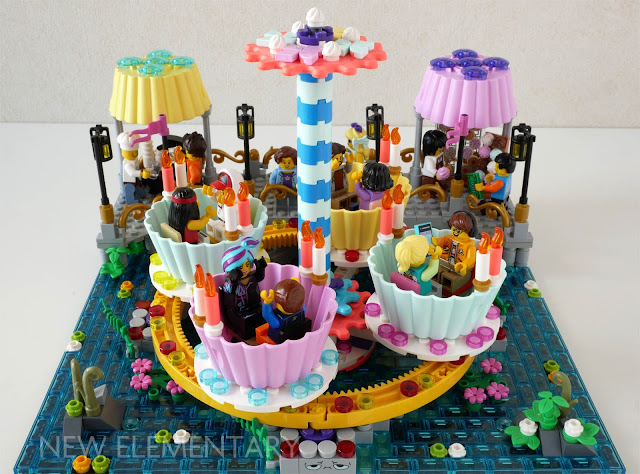 When I first set eyes on these cupcakes, all I could think of was that they were about the right size to make a Cupcake Waltzer ride for Funland, the theme park in my Ninjago District. I had originally wanted to use all eight of the cupcakes but the drive mechanism had to be built around four of the Technic “banana gears” - officially, Technic Gear Rack 1/4 Circle 11 x 11, 35 Teeth (24121), but that’s a bit of a mouthful! Four cupcakes seemed to fit the geometry much better. The minifigures are enjoying their ride, which whizzes around at some speed - have a look at this Cupcake Ride Video.

I have also used two of the cupcake bases as canopies above a coffee stand and a cake stall - perfect for the visitors of Funland to stoke up on some sugar and caffeine before they take a ride! 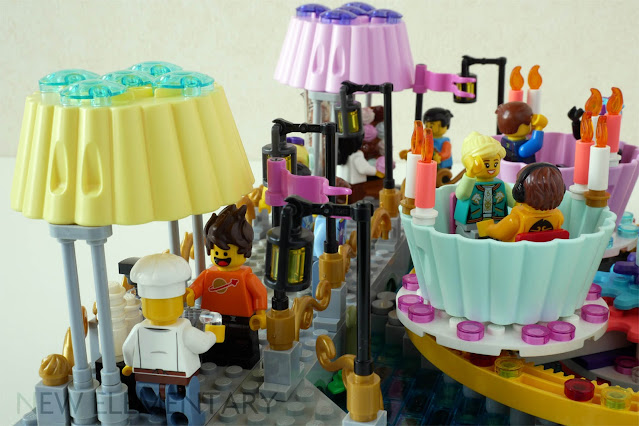 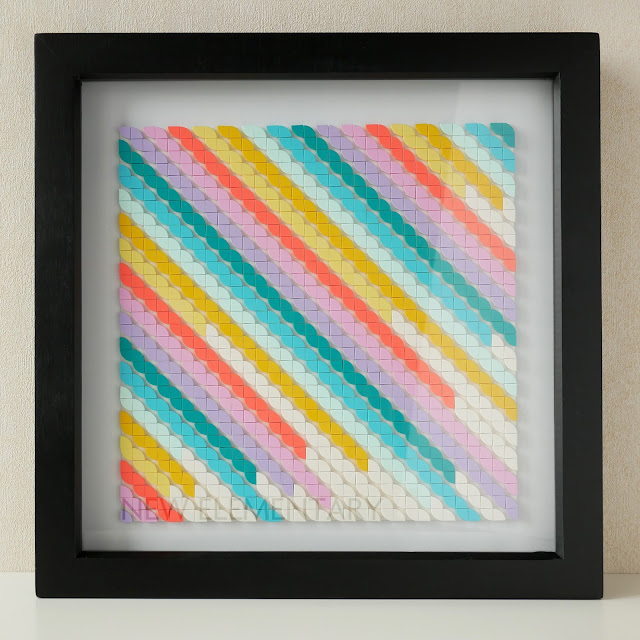 I didn’t want to let all of those colourful DOTS go to waste, so I decided to make this piece of Modern Art with the eight different colours of pizza tiles from the set, plus a few extras from my own collection, filling a 32x32 white baseplate. Now all I need to do is find a place to hang it up on the wall. 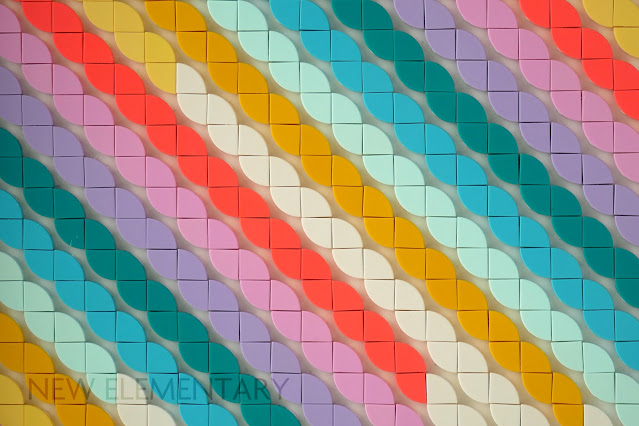 I have built several Great Ball Contraption (GBC) modules which I’ve taken to various shows with my LEGO User Group, and I’m also a member of a GBC discussion forum where these new cupcake bases have attracted some attention. While this is not a fully-built MOC, I thought I would rough up an idea for a conveyor for GBC balls which could form part of a module. 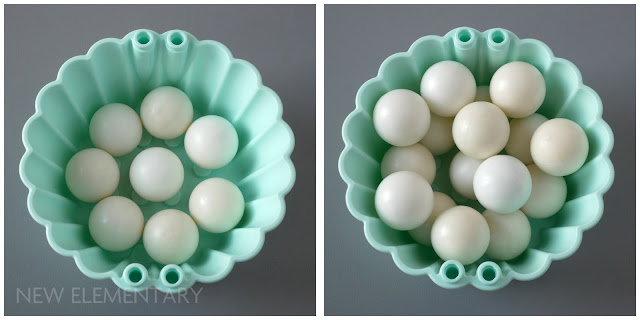 As you can see from the pictures, the cupcakes will hold quite a few balls - on the left it contains 8, on the right, 16. While the 16-ball capacity does not overrun the top of the cupcake, it is probably too many to handle at one time for a reliable module.

The video shows my rough conveyor mock up. Each cupcake is attached to the track with a couple of Technic half pins. It’s not ideal, and the clutch is just about sufficient, but the geometry of the belt would not allow for more connections. Any module would also need a gated loading mechanism, which would have to be arranged so that the cupcakes are only filled for a short time as they pass, to avoid spills between the cake cases. Emptying them is somewhat easier, with gravity being a perfectly acceptable solution! And of course, the drive would not have to rely on me standing there and hand cranking the mechanism all day - but I hope it provides some inspiration for better GBC builders than me to have a go at using them creatively.

The set contains 622 pieces and retails at £21.99 / $24.99 / €24.99, giving an excellent price-to-part value of 3.5p / 4.0c despite having those chunky big cupcake pieces. I noticed that all of the component parts were available (at the time of writing) from LEGO Bricks & Pieces service in the UK, and as a little exercise, I calculated the cost if you ordered the parts individually from there - the bill would be a whopping £55.36! That’s quite a saving, even before any likely discounts that the set might see, from various retailers in due course. If you are buying from Bricks & Pieces, or indeed this set from LEGO.com, please consider using our affiliate links, New Elementary may get a commission: UK LEGO Shop | USA LEGO Shop | Australia LEGO Shop (for other countries 'Change Region').

Aside from being great value for money, the set offers a creative activity for up to eight participants at your party, with plenty of extra pieces for them to create something unique. The cupcakes can store a few trinkets or other non-LEGO party favours. The large new moulded cupcake bases may perhaps have a more limited use than many pieces for builders of MOCs, but are still worthy of consideration.

READ MORE: Sustainable LEGO® elements: will Recycled PET be the end of ABS?

Posted by: Admin Posted on 6/26/2021 06:02:00 am
Email ThisBlogThis!Share to TwitterShare to FacebookShare to Pinterest
Labels: Dots, MOC, Set review