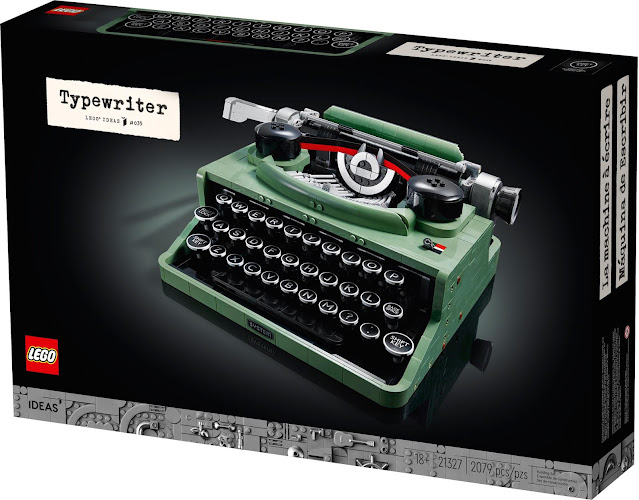 The LEGO Group has just revealed the new LEGO® Ideas set, 21327 Typewriter, and on top of the details from the press release we also have additional information for you from the team behind this thrilling new set! It measures 27 x 26 x 12cm, contains 2079 pieces and will cost £179.99/ US$199.99/ €199.99/ AU$329.99/ CA$269.99. Availability to LEGO VIPs is from Wednesday 16 June 2021 and general sale is from 1 July. When the time comes we’d appreciate if you would consider using our affiliate links, New Elementary may get a commission: UK LEGO Shop | USA LEGO Shop | Australia LEGO Shop, for other countries 'Change Region'. 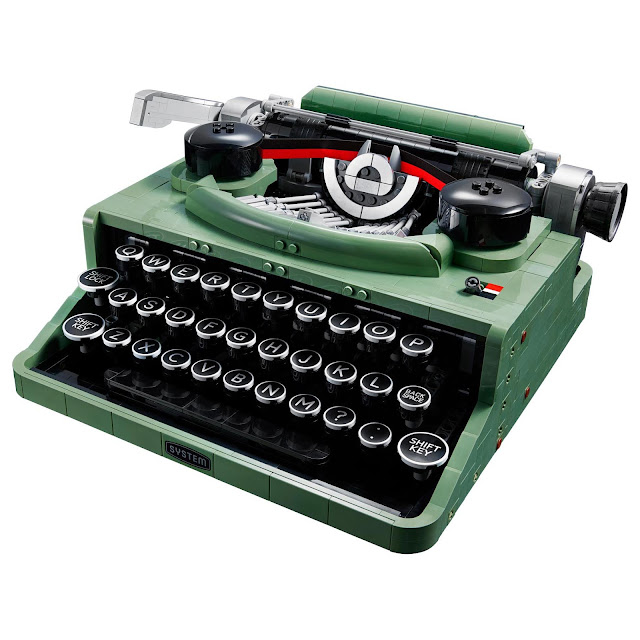 The original submission was designed by LEGO fan (and New Elementary 2018 parts festival guest!) Steve Guinness, who says: “I wanted to create something totally different from anything that LEGO has ever done before and showcase that you really can make anything out of LEGO. I bought a vintage typewriter for my research and then played around with bricks and the mechanism until I was happy with the design. I hope it will bring nostalgia to adult fans like me, and wonder and curiosity to younger fans who might not have ever seen a real typewriter!”

One big difference between the set and the original Ideas submission is that the set actually “works”. Or at least it partially works… it doesn’t actually type of course, but all the letter keys will move the carriage as well as a solitary typebar (the little rib-like hammers that strike the paper).

This is the first time he has interacted with the community via an actual LEGO set: the typewriter uses real paper, A5 sheets because of its size, and there are pre-printed sheets in the box of a letter written and signed by Thomas in 43 different languages. 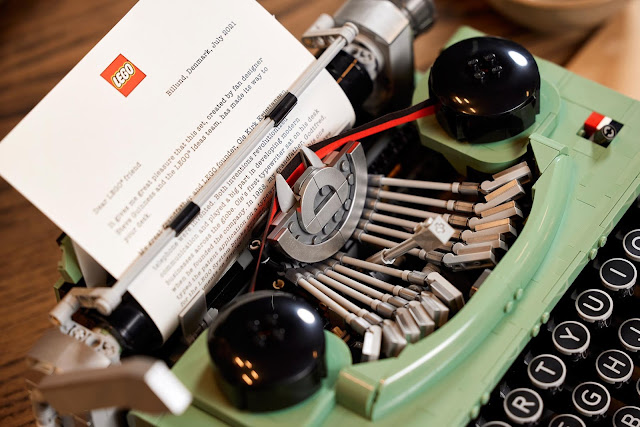 The set does not reproduce an actual existing typewriter in particular as this would have required an intellectual property partnership, but they did use two or three different models as reference. They have a person in the company, Matt Boyle, who is a typewriter fan and collects them, so they used his models to study internal mechanisms. They tried to give it a 1930s vibe, with details like the rounded keys. 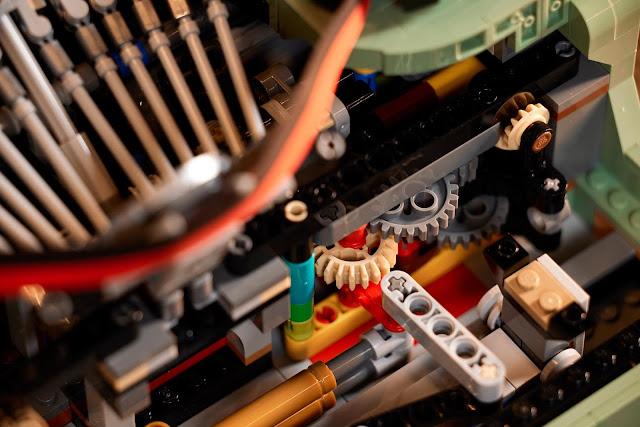 They tried to reference how real typewriters work, so a lot of the mechanics are very similar and there's a big structure that goes through the back. Of course the inside is a lot more bulky than the thin steel pieces you find inside a real typewriter. The model is quite Technic-heavy; essentially a Technic model inside a System shell. There are a couple of very visible studs on the model that could have easily been tiles but the general LEGO aesthetic would have been lost, so they decided to keep them. They didn’t really consider any Powered Up functions, because typewriters like this are mechanical anyway.

The keys sound very realistic and the resistance is apparently also close to reality – a bit lighter because of course they’re not made of metal. They are dampened by rubber Axle Connectors Double Flexible (45590). 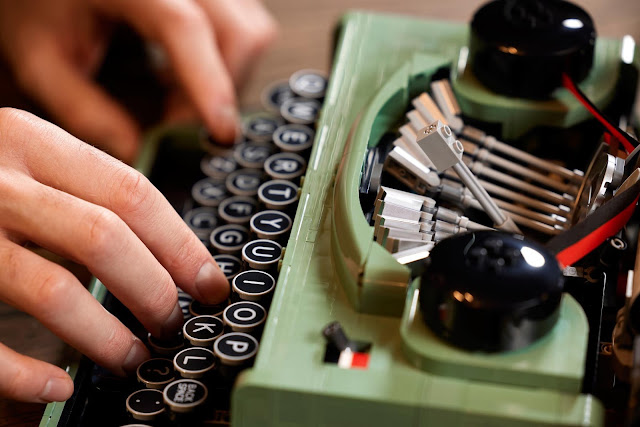 The shift keys don't do anything; in real typewriters they make everything literally shift, but there was no room to do that here. Backspace and space keys also don’t move the type bar, of course. There is no letter on the (only) pinhead; there wasn’t enough space and since it would always be the same letter anyway, it wouldn’t have been very useful.

Of course here at New E we’re interested in the new parts and we get a few recolours because as you will have no doubt noticed the colour chosen for the final set is Sand Green, after Steve made a prototype in this colour. 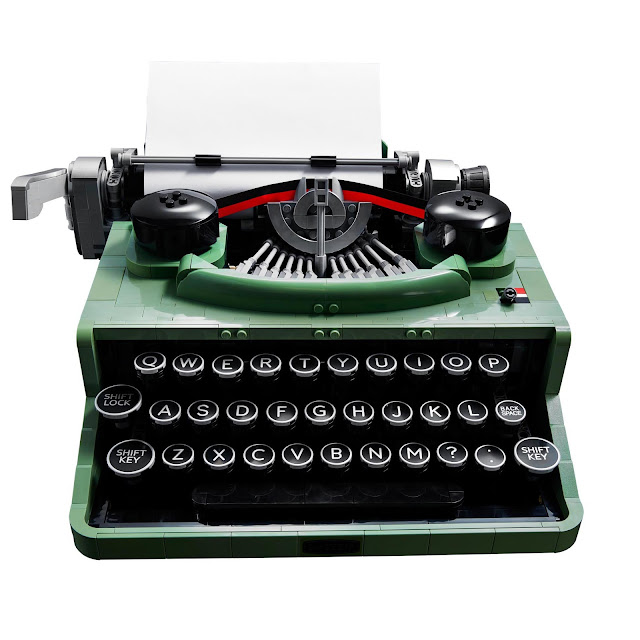 As is common with LEGO Ideas sets, we don’t get any new moulds this time but there’s a new textile element: the ink ribbon made in two colours; black and red. Those of us old enough to have used typewriters like this will remember that you could change the text colour by pressing a button which shifted the ribbon position. 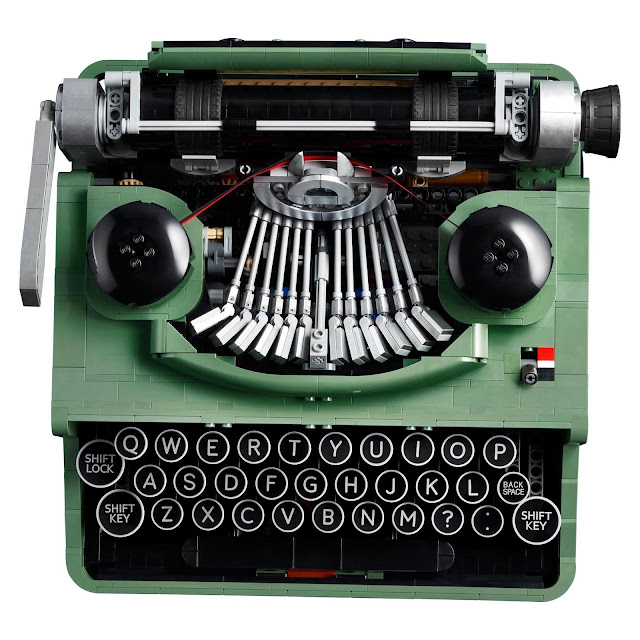 And of course - perhaps the best detail for AFOLs - there are 31 2x2 black rounded tiles printed with letters. The typeface was designed specifically for the model. They tried to keep the letters as symmetrical as possible, so as to be more MOC-friendly. There are no numbers though: in three-bank portable typewriters - the sort reproduced here - numbers are positioned on the same keys as the first row of letters. If LEGO had followed this route, those parts would have been less useful for MOCs, so they opted not to feature numbers at all. 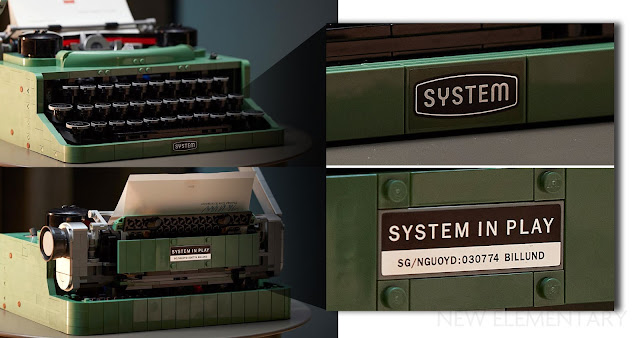 They did consider making stickers for the 31 letters, but it would have been excessive to subject people to that. So while most of the parts are printed, there are two stickers; “System” on the front of the typewriter and “System in Play” on the back and both are chromed. These are of course references to the LEGO System and its founders. A further Easter Egg is on the back sticker: the initials of the fan designer Steve Guinness and his birthdate. It also says “NGUOYD”, which stands for “Never Give Up On Your Dreams”.

Focusing on those exciting recolours, both the left and right variations of the “Porsche Bow” Slope Curved 10 x 2 x 2 with Curved End (Design IDs 77180 & 77182) appear here in Sand Green for the first time. The recent 1x1 Brick with Axle Hole (73230) also debuts in Sand Green. However there are no 1x8 Sand Green bricks, if you’re wondering. (That’s one of the rarest parts needed to recreate 10185 Green Grocer; very sought-after by fans.) 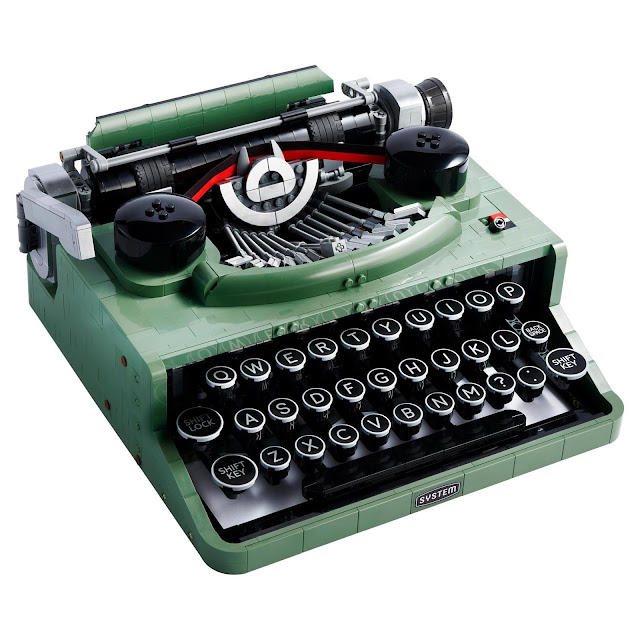 The team answered as follows: “Every LEGO piece in every different colour has a different value, so, a different price that it costs to add that to a LEGO set. The more you do to a LEGO element, the more it costs. So for example, the more printing you put on it, the higher the price of that piece becomes. In this case, we know that it is supposed to be metal, so we wanted to add as much silver as possible. It has some, but we did not want to overdo it and just do everything. And also we can't, because there is actually a limitation on what's possible, to paint with this drum lacquer we are talking about here. So it's mostly tiles that have this effect on them. It's also because when another model changes a bunch of colours to be drum-lacquered, that then makes them available for other products to use. So it's easier for everyone to use more when some more are made, basically. But that's not always the case and we always have to delete them, sometimes pretty quickly in order to make room for new colour changes elsewhere in the company. So it's always a flow.”

Text © New Elementary. Images ©2021 The LEGO Group except where attributed.