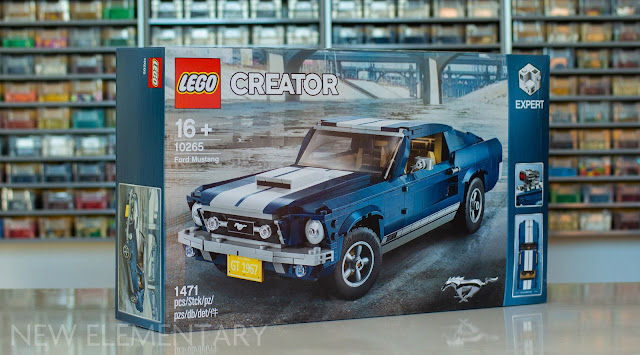 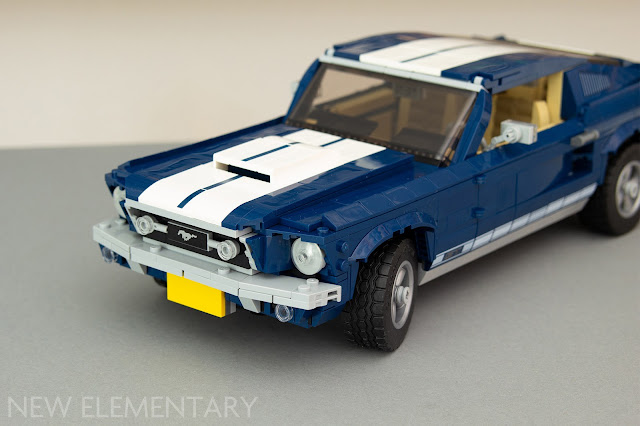 As someone who as near to no clue about cars the building was a great pleasure. It’s a very satisfying experience to see how the lines of the original get translated into brick form and how seamlessly the final product is. The Mustang really benefits from the edgy design of its big brother as the main shape is rather simple and the designers therefore could focus more on particular details. 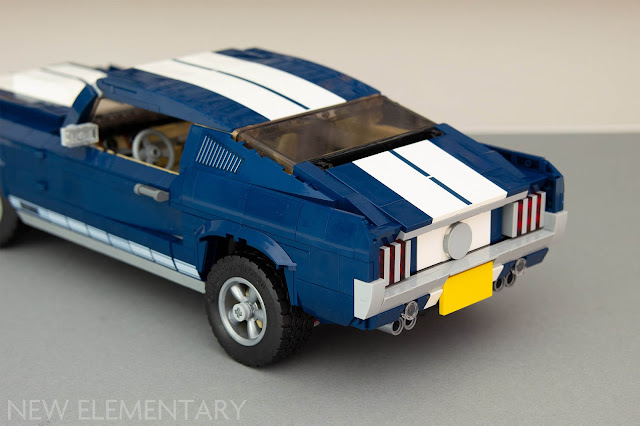 In terms of building techniques there is nothing extremely unorthodox, but still a lot of details caught my attention and I had to admit how clever it was done. For example this SNOT connection at the bumper bar which makes unexpected use of the 1x1 Brick With Handle (Design ID 28917). 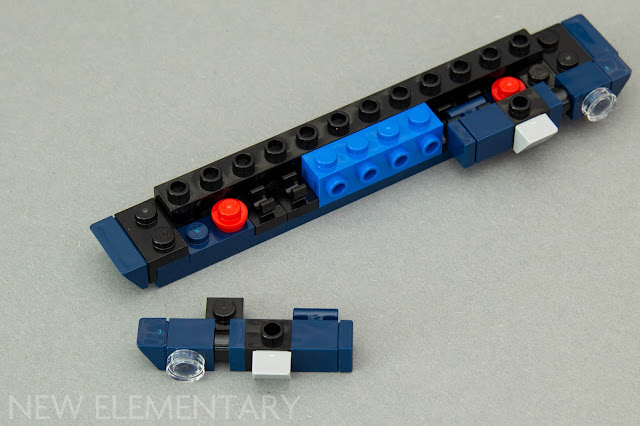 It also made me smile to see how designer Mike Psiaki showed his love for triangles once more with this simple use of the Pythagorean Theorem at the beams under the hood: 3² + 4² = 5². 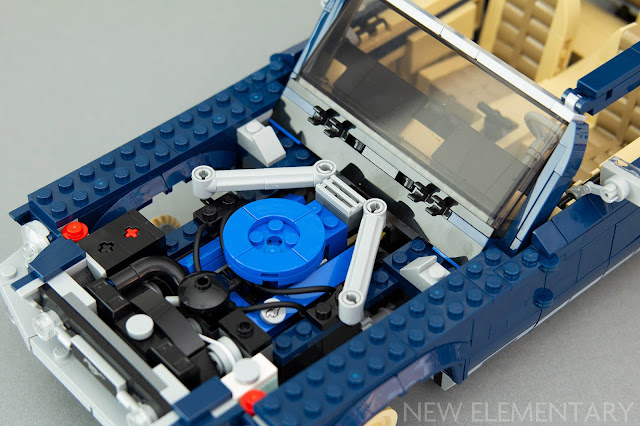 Building the chassis of LEGO vehicles can get boring sometimes, but not with the Mustang as you implement the two functions of the set at the same time as constructing the chassis.

It has steering in the front that can be used by turning the steering wheel. It’s a simple mechanism, but as far as I know it’s the first time we see it in a Creator Expert car and it works perfectly.

The back of the car can be lifted by turning a well-hidden wheel at the rear end.

Notable is also the good use of a Black flag (30292) to prevent you from looking through the gap when the rear suspension is adjusted. 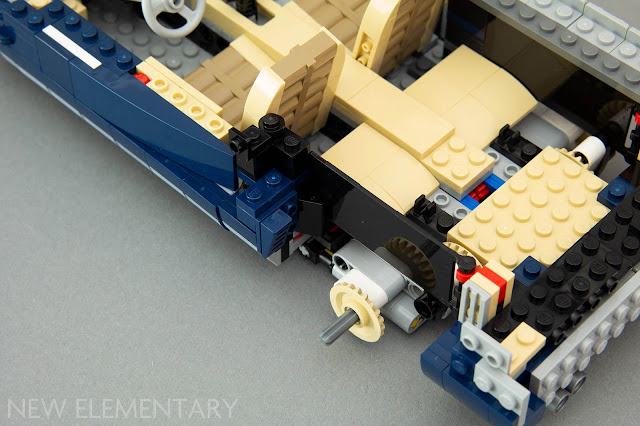 “Designed to be designed by you” was the Mustang’s first advertising slogan and correspondingly the set comes with six additions to customize the car according to the owner’s desire: The adjustable rear suspension, shorty exhaust headers, supercharger with scoop intake, front splitter, rear spoiler and a nitrous oxide tank in the trunk.

I have no clue what half of these are for, but it looks totally cool when you add them to the vehicle. 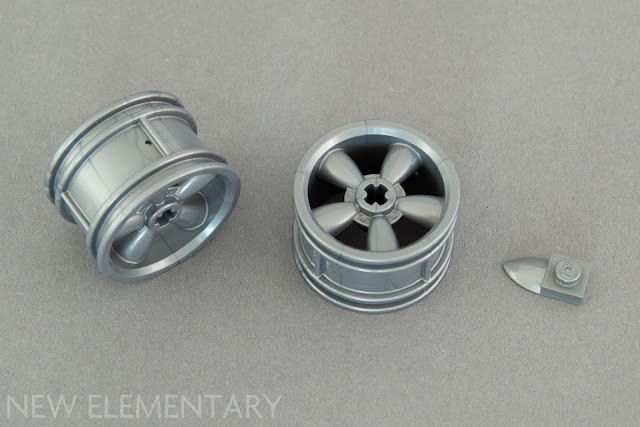 Interestingly both new moulds get pointed out at the beginning of the instructions.

As expected for an Earth Blue car we get some recolours in that beautiful colour. 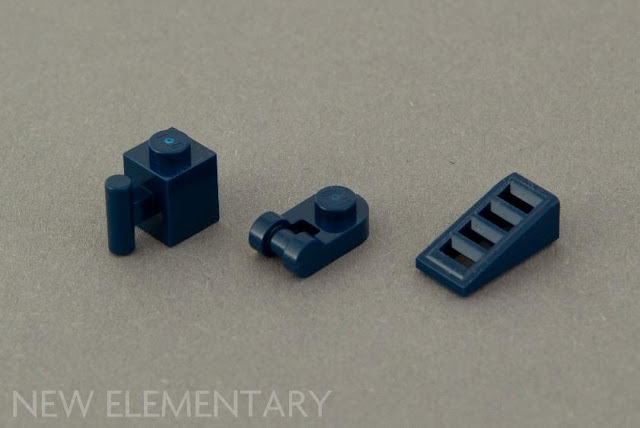 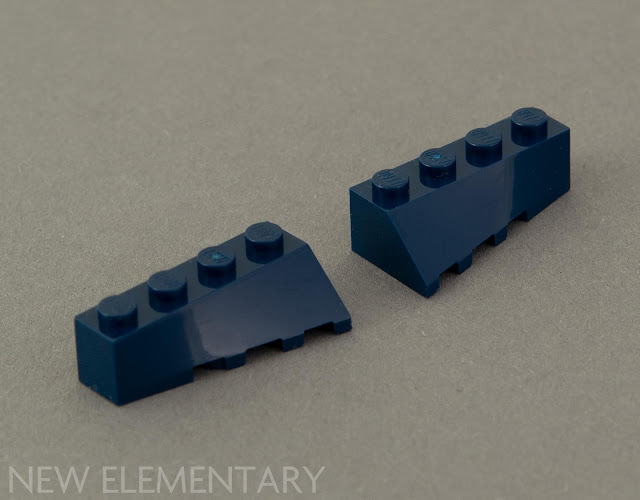 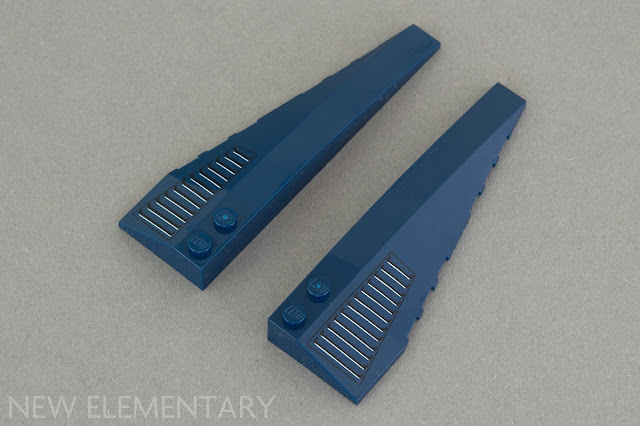 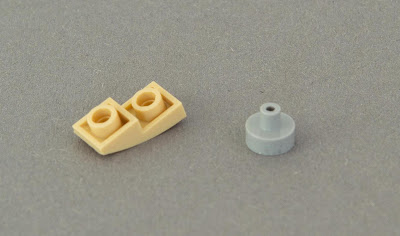 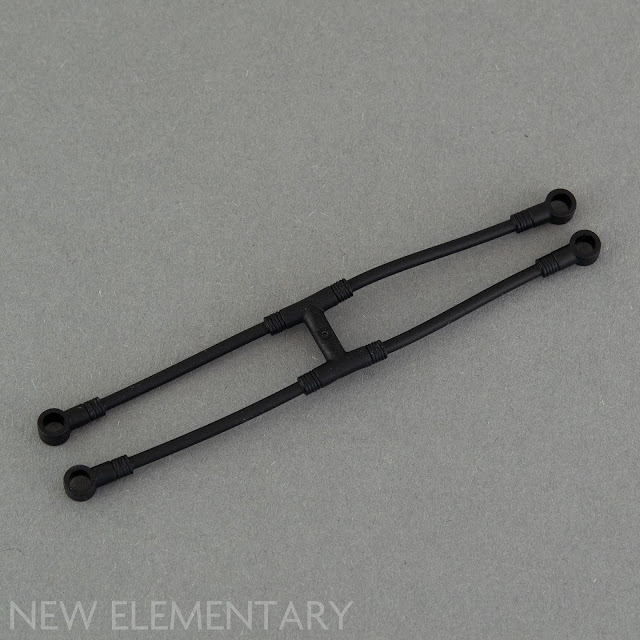 For a set of this price point you can expect some new printed elements and will get them. Prominent at the front is the 1x3 Tile with Mustang emblem (Element ID 6258156) in Medium Stone Grey. 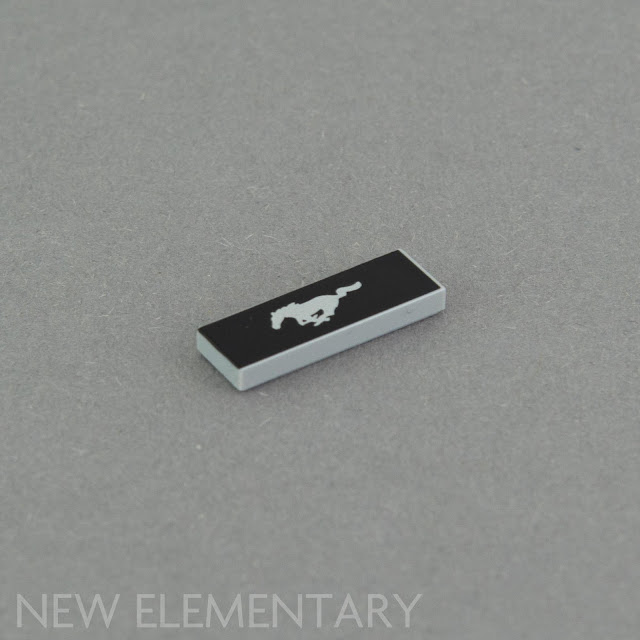 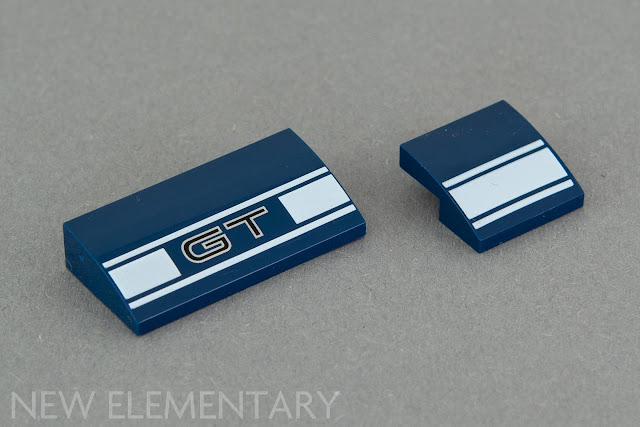 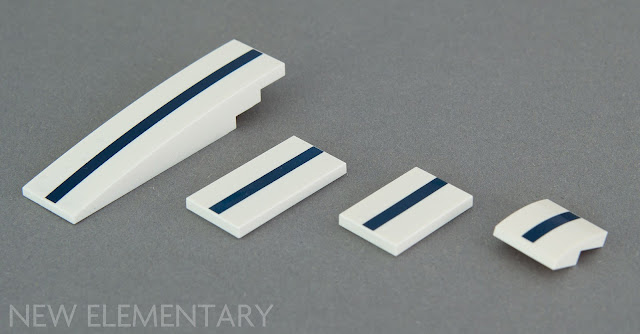 When you put two of these striped elements next to each other it can happen that the stripe doesn’t align perfectly, because some of the printings seem to be a tad off. This effect increases when you place two pieces contrary to each other, but just by turning one of the parts around you can negotiate the effect at all. 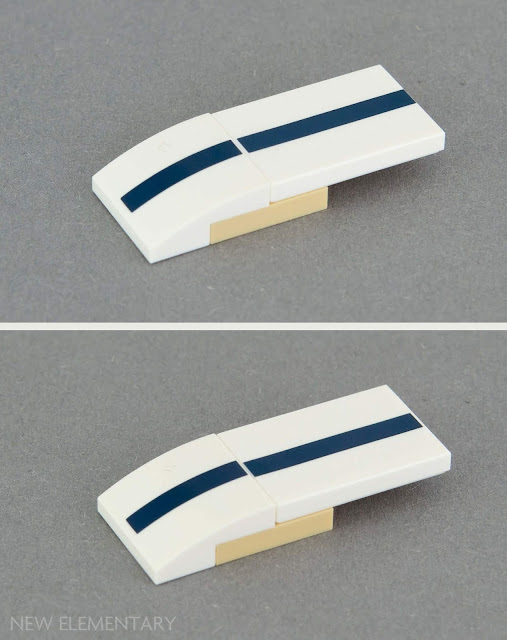 That won’t work in every situation (for example with slopes), but when I built the Mustang I had no problem to align all striped parts perfectly. 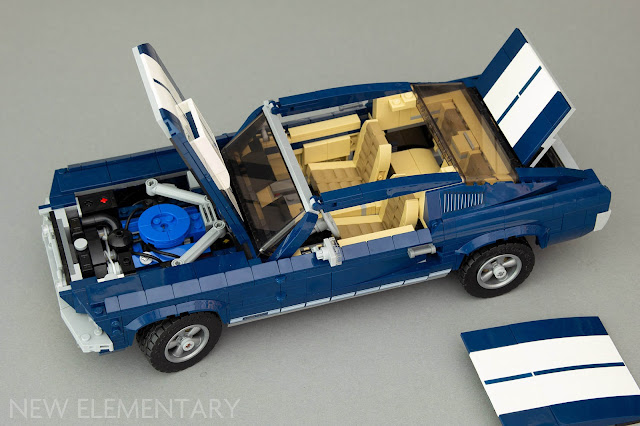 Unfortunately the 2x2 Tile on the rear end with the GT emblem is a sticker. 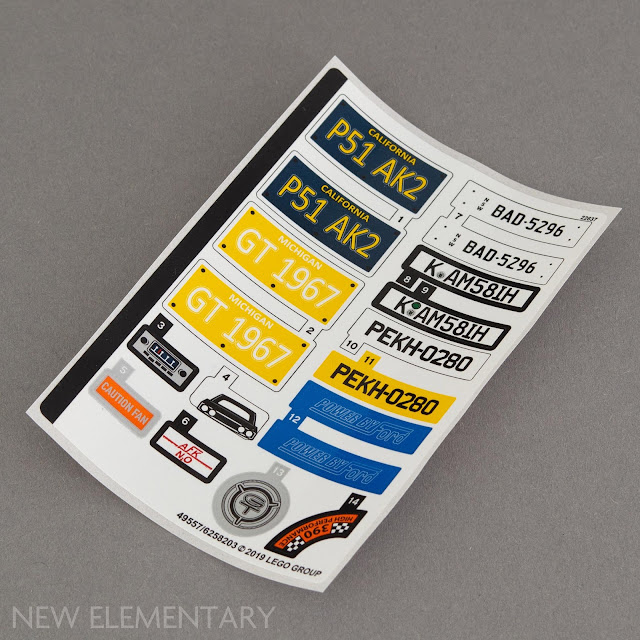 If I had to nit-pick it would be the interior. While the middle part with the shift lever is well done,  everything around is rather boring. Paddles or more interesting seats would have made it better. You also don’t get a printed Mustang 1x1 Tile for the steering wheel, but luckily you get one extra at the engine, so you can add it yourself. While the doors looks great from the outside and open quite good the inner side looks a bit random to me. 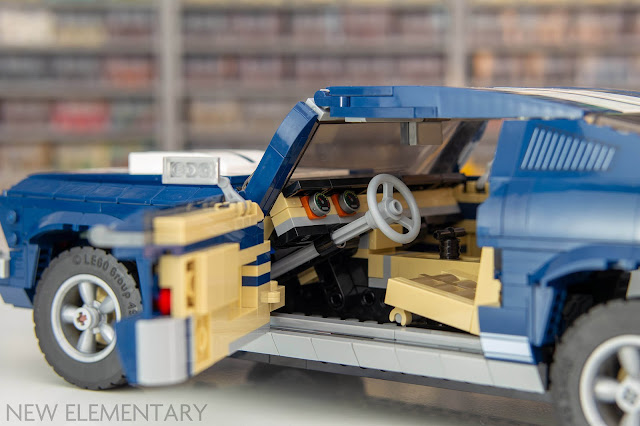 Nonetheless I really like this set. Maybe it’s because of the colour or because, as LEGO always wishes, I had a great building experience. It’s just the perfect car to make in brick form with not too many curves the designers have to struggle with, and a lot of character. 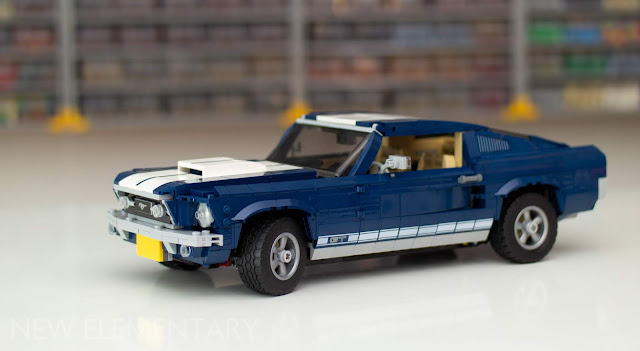 Products mentioned in this post were kindly supplied by the LEGO Group. All content represents the opinions of New Elementary authors and not the LEGO Group. All text and images are © New Elementary unless otherwise attributed.
Posted by: Admin Posted on 2/22/2019 02:00:00 pm
Email ThisBlogThis!Share to TwitterShare to FacebookShare to Pinterest
Labels: Creator Expert, Set review, Technique