Alexandre Campos is back with another 2021 LEGO® Technic set: 42121 Heavy-Duty Excavator. Buying this set? Consider using our affiliate links, New Elementary may get a commission: UK LEGO Shop | USA LEGO Shop | Australia LEGO Shop, for other countries 'Change Region'. The products in this article were provided for free by LEGO; the author's opinions are not biased by this. 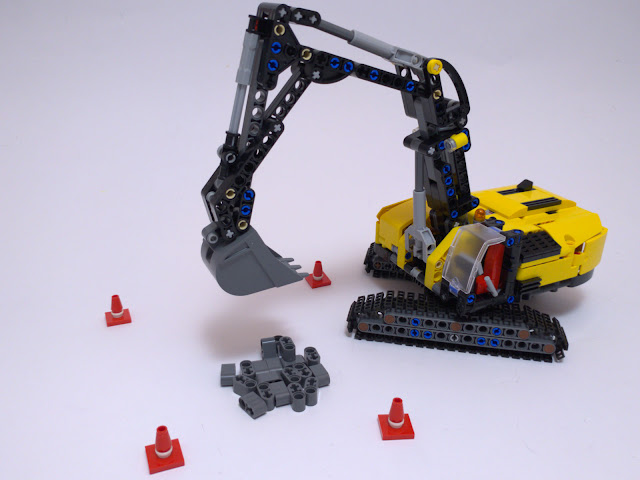 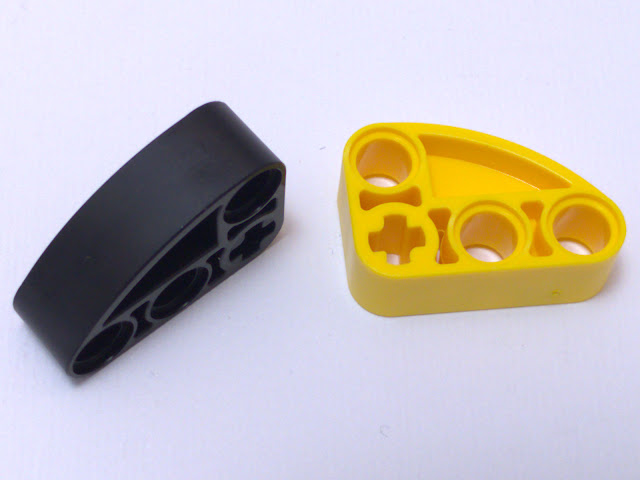 The yellow ones serve in this model an aesthetic purpose, extending the “wedge” panel on the rear right of the superstructure, while the black ones have a structural purpose, to attach the dipper to the boom in the correct position.

The Excavator brings a welcome recolour to an existing part. 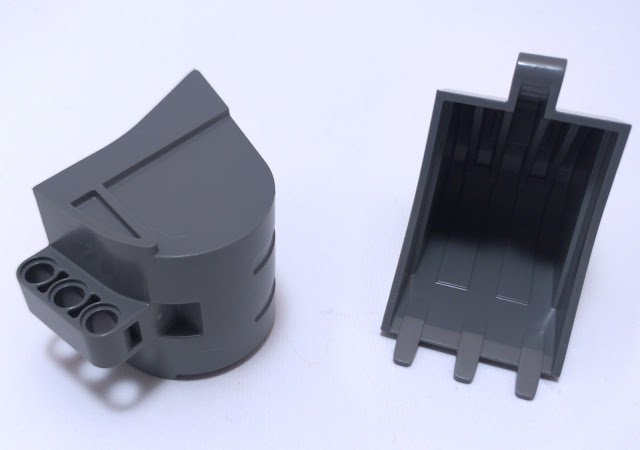 While not new in design or colour, this set has a few other interesting elements. 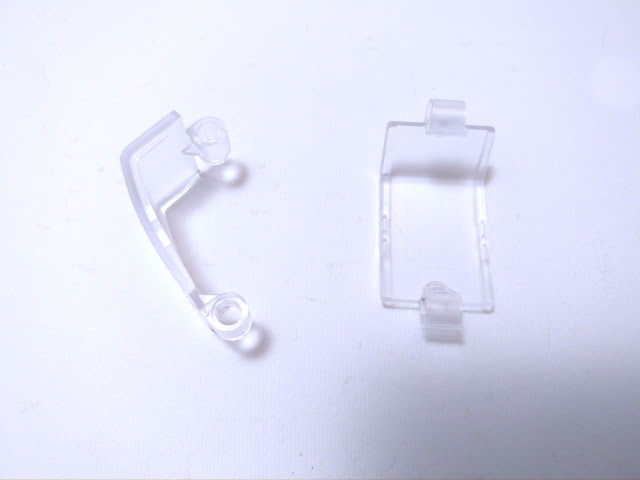 The Excavator’s windscreen is composed of a Technic Panel Curved and Bent 6 x 3 in Transparent/ Trans-Clear (6329052 | 24116). This element was previously available in the 42063 BMW R 1200 GS Adventure and the 42070 6x6 All Terrain Tow Truck, albeit with a distinct Element ID: 6133686. I was hopeful that this different ID meant that its “frosted” appearance, which is less than ideal for windscreens, would be gone; alas, no. Maybe it’s a limitation of the material. 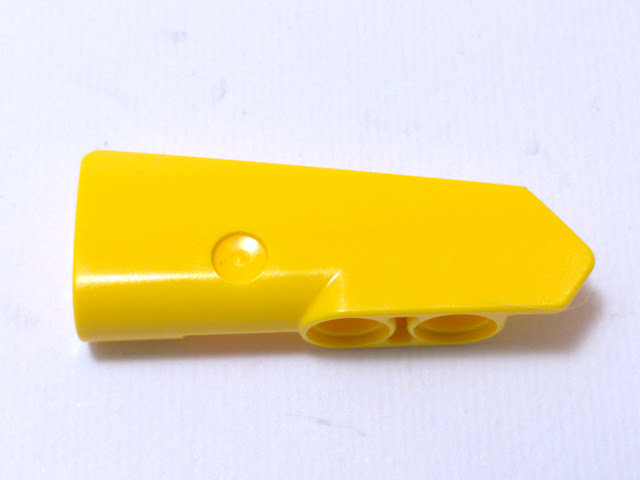 The Technic Panel Fairing #22 Very Small Smooth Side A in Yellow (6251191 | 11947) is available in only one other set, 42114 6x6 Volvo Articulated Hauler. Again, like the 6x3 curved panel above, its Element ID changed for some reason; this is especially odd, since the only set it comes in appeared around 6 months ago. This set comes with one of these. Sadly, its symmetrical version, the panel #21, is absent. 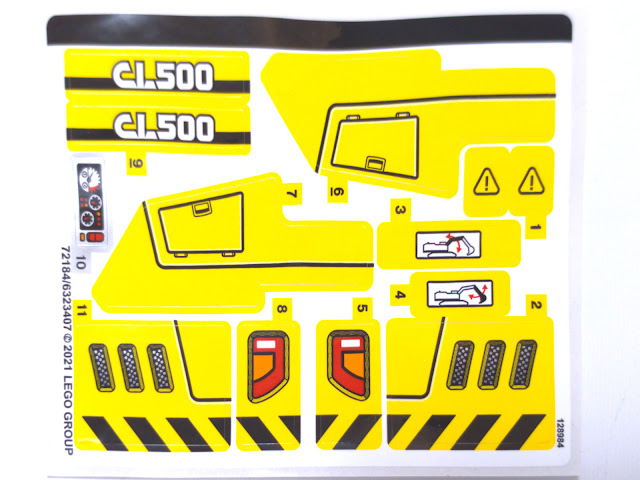 Fortunately, there aren’t many stickers in this set. The model doesn’t really need them to look good, and the functions aren’t complex enough to require the stickers that identify them. The danger stripes and rear lights in some of the stickers, on the other hand, should help reduce the predominance of yellow in the model.

I find it odd, though, that there is a sticker representing a control panel, to be applied to a 1x2 tile. Couldn’t the set instead come with one of several available tiles with a “control panel” print?

I’m quite surprised that such a small set has the parts divided into four groups of bags. I don’t think so many are required here, but it sure helps reduce time spent looking for parts when building.

I’m very glad to see the Excavator bucking the recent trend of Technic sets not having a B-model. The instructions for this, however, aren’t included in the box; you have to download them.

The building process, as mentioned earlier, is divided in four sections. Oddly, whereas most Technic excavators are built bottom-up, with the undercarriage first and then working their way to the digging arm, 42120 mixes things up a bit. 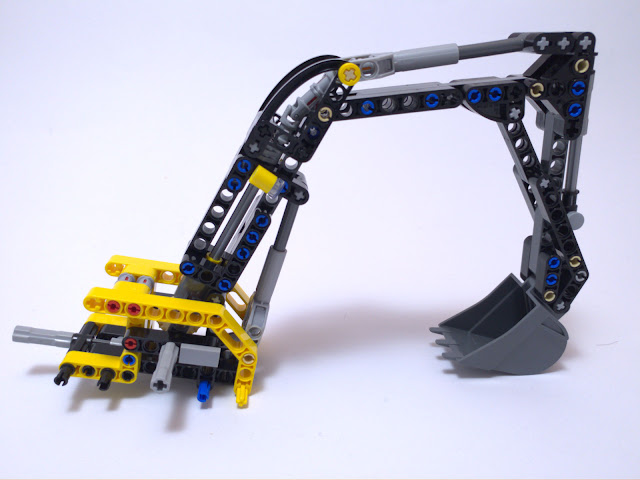 After the first set of bags, the set’s core functionality is already practically finished. The arm is fully built, and the two mechanisms driving it are also accounted for. 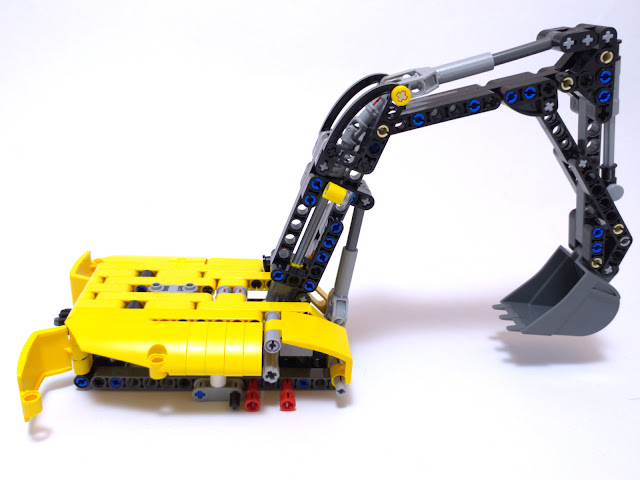 Then, after the second set of bags, the superstructure is almost done. This is mostly structure and aesthetics, and, in my opinion, wherein the set’s biggest missed opportunity lies. I’ll further elaborate on that later. 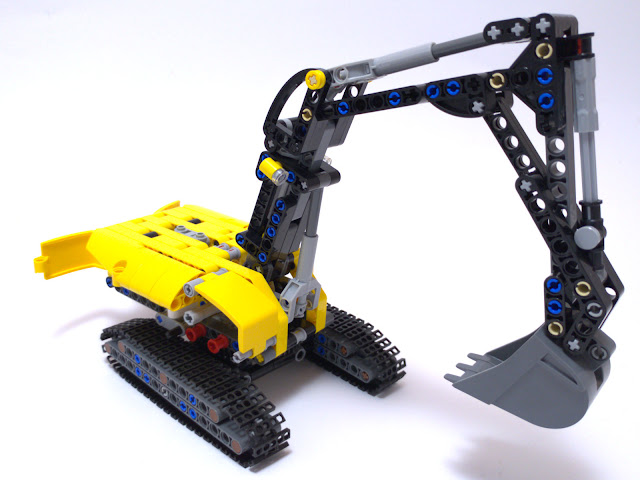 The undercarriage is built using the fourth set of bags. As expected, putting together the dozens of track links is a tedious but unavoidable process. Curiously, there are 4 leftover links: maybe these are intended for the B-model. 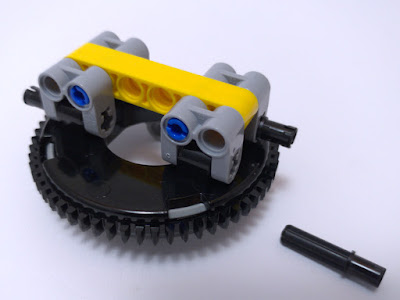 This is the core of the undercarriage. The Technic Axle Pins 3L with Friction Ridges Lengthwise and 2L Axle (18651), once inserted, will most likely be a chore to remove, as there is barely any space to push them from the other side. 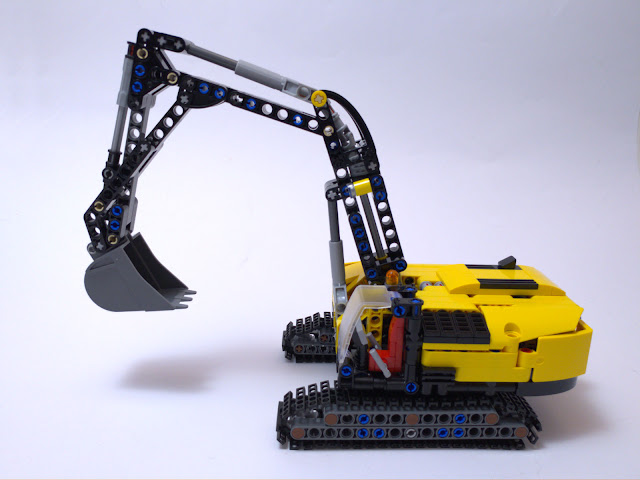 After the final set of bags, the excavator and its accoutrements are finished. The process took me around two evenings with breaks here and there. 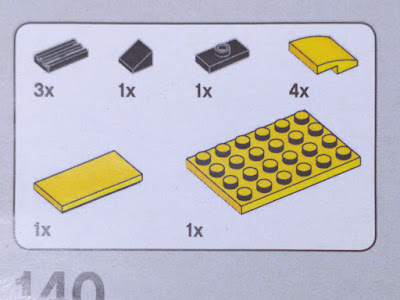 Looking at this step, I almost felt like I was building a City or Creator set, not Technic. But I didn’t find it anything more than a curiosity: I have absolutely no problems mixing System elements in a Technic set (and vice-versa), as the looks of one type complements the functionality of the other. 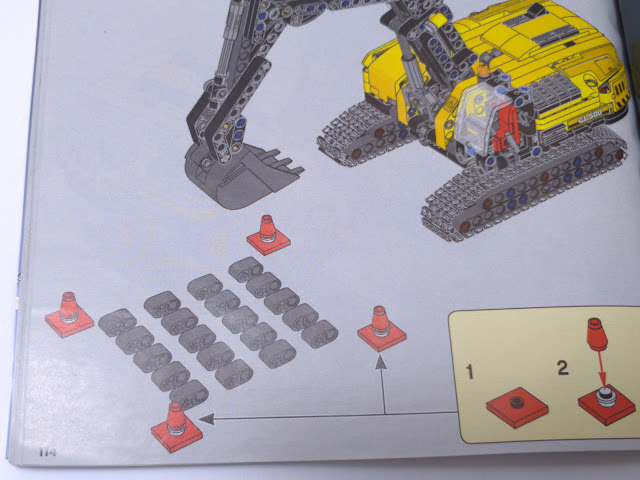 The last step is the most complicated of them all: it requires you to get 20 Technic Beams 1 x 2 Thick with Pin Hole and Axle Hole (60483), and assemble them... nowhere. These are the “rocks” for the Excavator to handle.

Now that the model is finished, let’s see how it looks and plays. 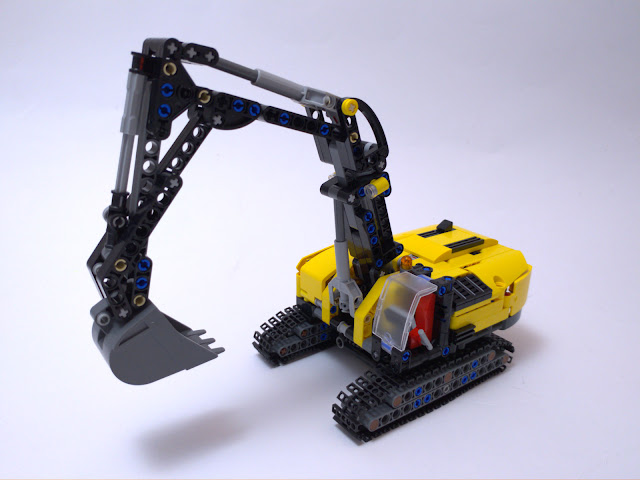 The functionality is basic, and the same as many previous Technic excavators: boom elevation, dipper elevation linked to the bucket, and free-turning superstructure and tracks. 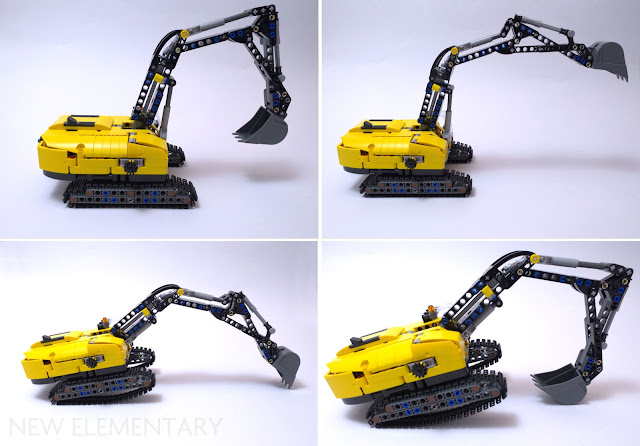 The images above show the range of motion of the digging arm. It’s nice that it can reach below the ground level, but when the boom is raised the bucket is unable to tilt inwards enough to be able to hold much cargo. 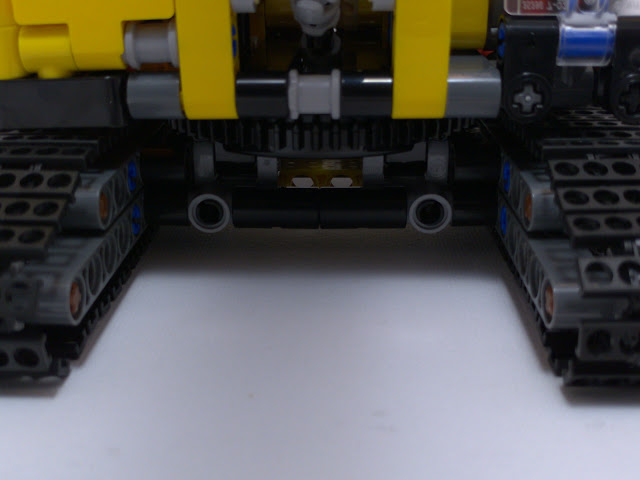 Studless Technic models tend to have odd widths (as in “opposite of even”, not as in “weird”) but curiously that’s not the case here: the way the undercarriage is built gives the model a total width of 14 modules (not counting the protruding Hand of God control on the right side).

The assembly at the top of the dipper intrigued me. It is clearly meant to simulate the hydraulic piston that in real excavators moves the bucket, but here that motion is linked to that of the dipper. It certainly seems like the designer originally intended to use here a Technic Axle and Pin Connector Perpendicular with Extension (53586) instead of this contraption, but the added friction to the whole mechanism was probably deemed excessive. Regrettably I don’t have any of this element to test this hypothesis. 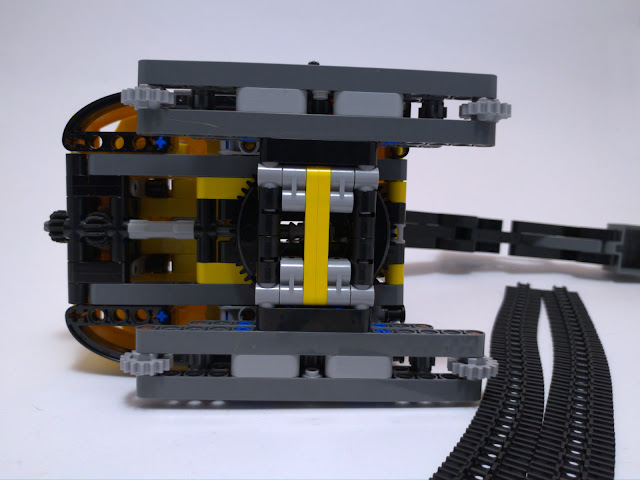 Here is the underside of the model, with tracks removed for clarity. Not much to see here. 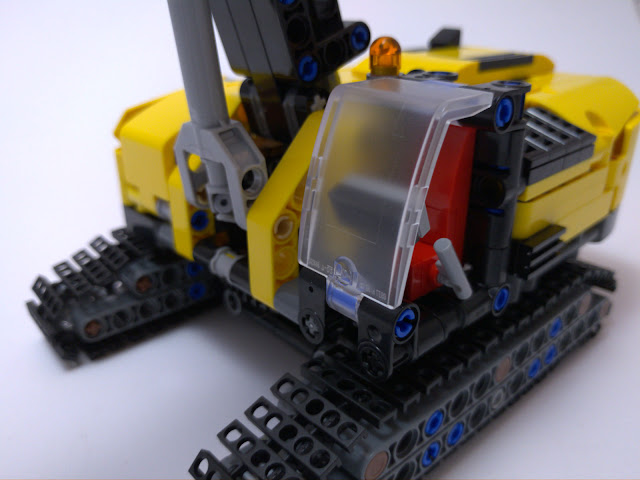 This is why I wish the panel used as the windscreen didn’t have this frosted look. The operator won’t be able to see much out of it, and needs to turn on the de-fogger. 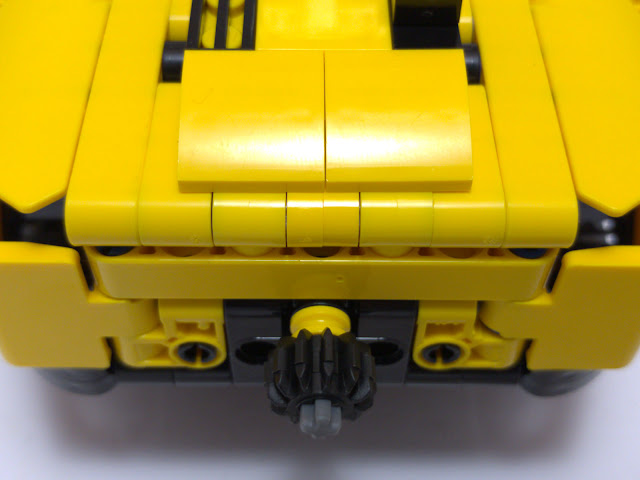 At the rear, we can see the symptom of a problem that has been plaguing LEGO elements with light colours when they’re around others with dark colours: the light plastic appears to have insufficient pigments and lets the dark colour seep through.

The set comes with the extras on the left of this image: 4 traffic cones to keep people away from the area of operations, and 20 “rocks” to be handled. But it doesn’t come with the symmetrical counterpart to the panel #22. These and other “wedge” panels are frequently used in pairs, and having just one half of the pair here, especially in a colour that previously only appeared once, is very disappointing. I’d gladly substitute some or all of the rocks or cones for a yellow panel #21 to go with the #22 and build MOCs with. 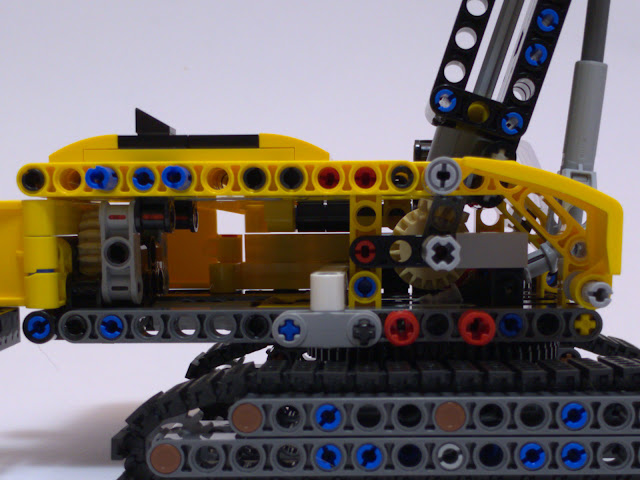 In this photo I removed the upper right panels and opened the side, to let you see the inside of the superstructure. There’s plenty of empty space inside, where that extra yellow panel #21 I mentioned above could have been stowed without affecting the looks of the model. A bit like how the extra steering wheel was hidden inside the cab of the 42078 Mack Anthem.

Instead of an excavator, you can use the parts of 42121 to build a tracked tractor with backhoe. While it requires the user to look at a screen, or spend paper and ink, it’s always better than not having a B-model at all. 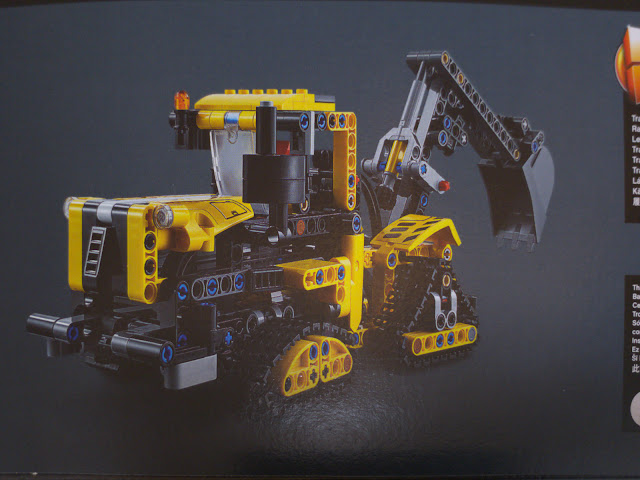 From what I can see, this tractor has a digger arm with the same functionality as the A-model, but a simpler mechanism for the dipper and bucket. This is likely offset by the presence of functional articulated steering. The tractor looks very good, especially for a B-model, and could pass off as an A-model of its own. Also, it makes interesting use of the 2x3 beams to shape the front tracks: again, a testament to the versatility of this element. 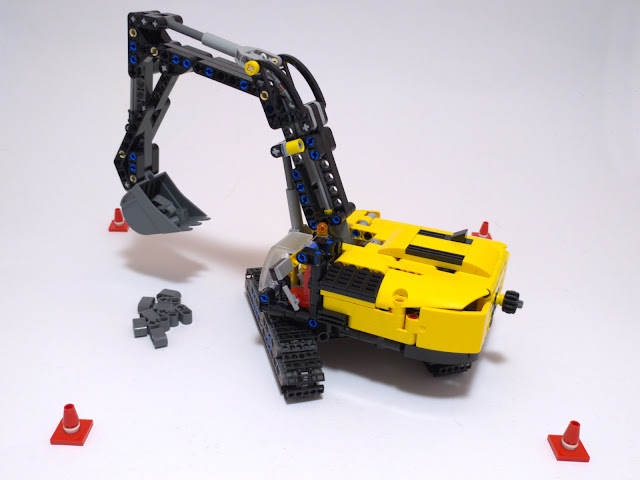 Its playability is nothing we haven’t seen before. As a matter of fact, the four following Technic excavators have the exact same functionality, only differing in implementation:

What 42121 does have over the previous sets is the design, which benefits from more modern elements to give it a more finished look. Speaking of modern elements, what this set has going for it is the fact that, so far, it’s the only source of beams 2x3 in yellow and the shovel in dark grey. Also, if you missed 42063 or 42070, this is another opportunity to get the (more or less) transparent panel. On the other hand, the rare yellow panel #22 missing a corresponding #21 is a sore point that could’ve been avoided.

Considering all the above, I’m not saying this set is bad; just that I don’t think it is above average, as a model or as a parts pack.

Automobile shows like to feature beautiful models advertising the cars being exhibited, so I thought I’d also have one showing off this piece of machinery. 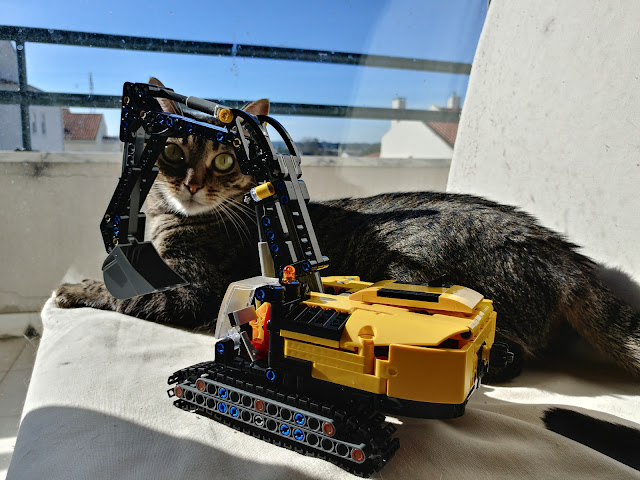 Posted by: Admin Posted on 4/30/2021 11:43:00 am
Email ThisBlogThis!Share to TwitterShare to FacebookShare to Pinterest
Labels: Set review, Technic