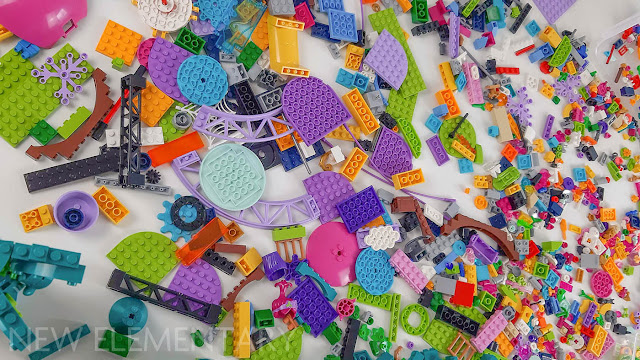 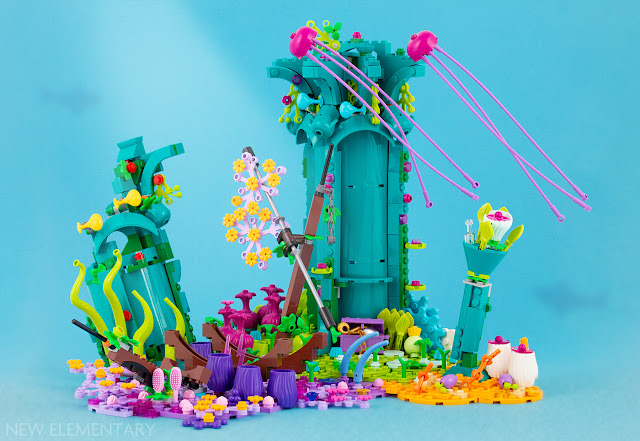 For this build I only used the bricks within five LEGO Trolls sets. There wasn’t really a way to use bricks from my collection anyway – I’m currently moving and, tediously, all my LEGO is packed up in boxes and more even boxes. 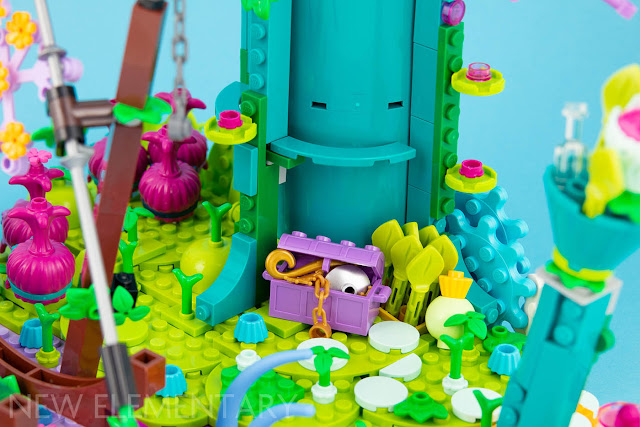 LEGO® Trolls sets are available on Amazon. As an Amazon Associate, New Elementary earn from qualifying purchases.
My resources were:
This gave me a total number of 1120 pieces. Which is quite a lot, as I realized when I tried to spread all bricks on my table, but of course still with a lot of limitations both colour-wise and element-wise. For example I was surprised to not find a single cheese slope in any of these sets.

I started my build with the new teal elements. The Cylinder Quarter 4X4X6 especially caught my attention and as I had two Pop Village Celebrations I had eight of them to play with. Soon the idea a Bright Bluish Green/ Dark Turquoise pillar was growing and I decided to go with an underwater scene for my alt-build. On one hand I could make the best out of the unusual column colour and on the other hand it gave me the chance to use many of the Trolls figures’ elements as various sea flora and fauna. 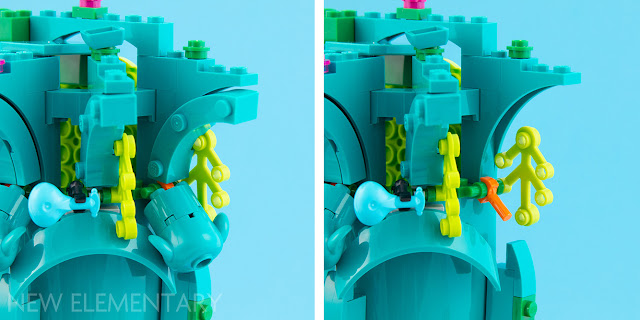 The top of the high pillar was the first building challenge as I wanted to combine the arch bricks with 4X4 Round Brick Quarters, as they fit perfectly. The elements I had in mind to connect them weren’t available, so I tried out something different and ended up using leaves, which not only solve the issue but also make great details. 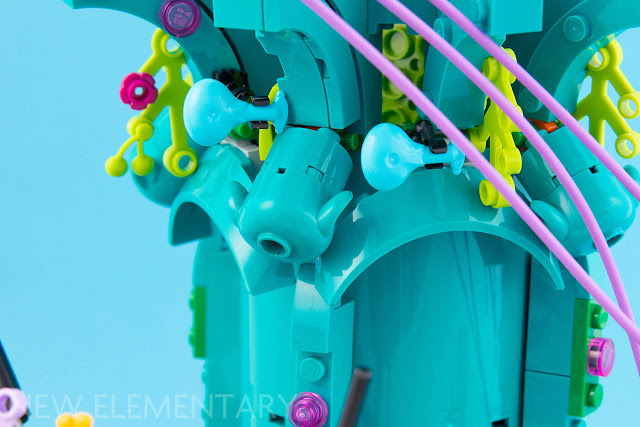 I used all the elements in teal I could find and didn’t hesitate to include some teal Trolls heads too. 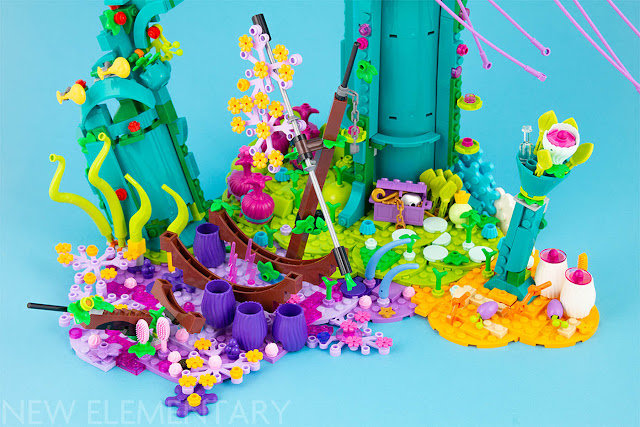 The ocean floor is split into three colour groups: lavenderish, greenish and yellowish. 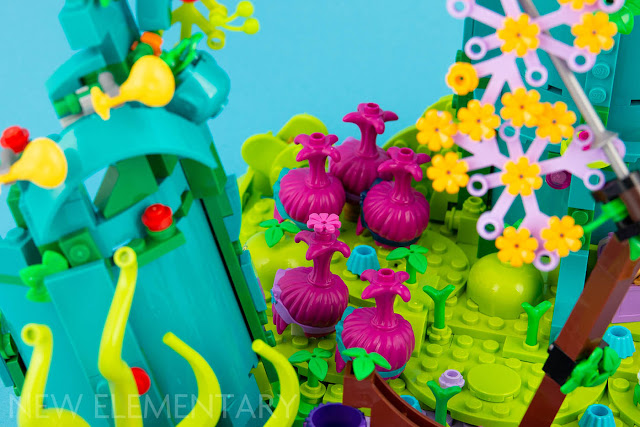 I heard there is an unwritten rule that every LEGO piece can be reused as some kind of coral, so I tried to prove that by using Trolls hairpieces, splat gears, horns, lightning bolts, hairbrushes and all kinds of plant pieces. 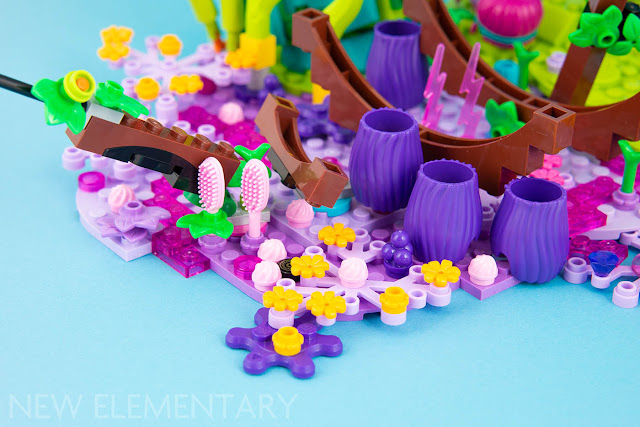 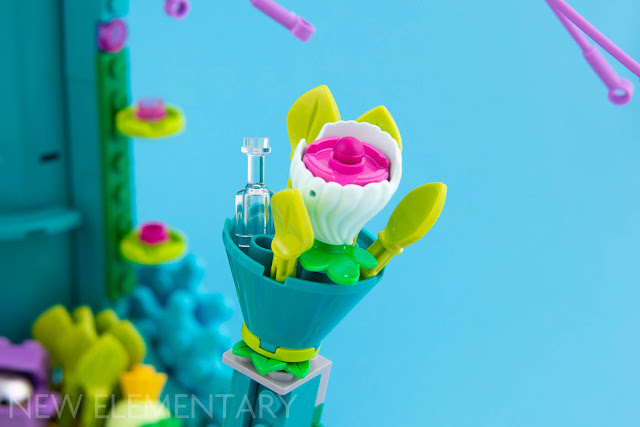 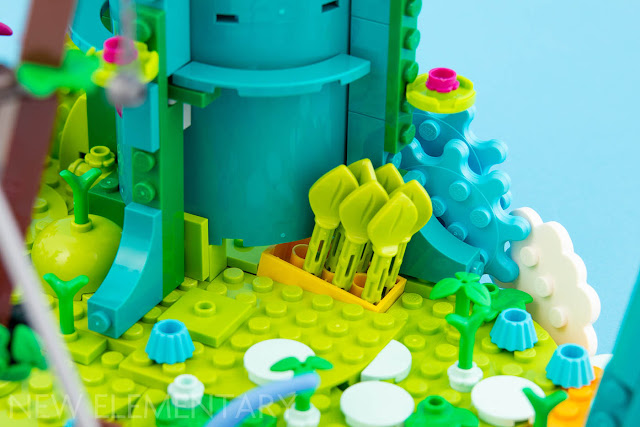 To (illegally) connect the new leaf pins from the pods, I built an upside down 2x4 brick into the ground. 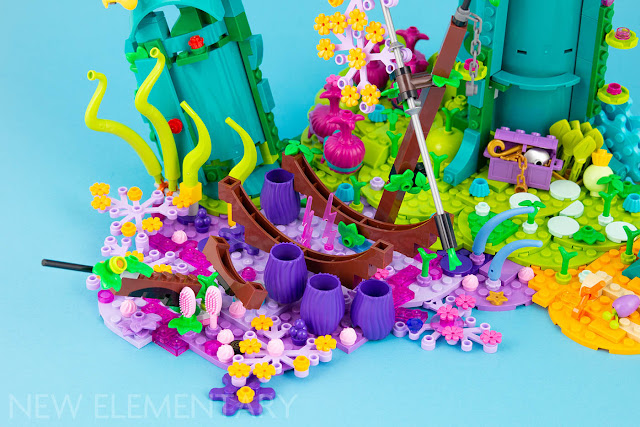 The shipwreck was quite a challenge as there were only ten pieces available in brown. In a regular MOC I would have made it more detailed, but I’m surprised how good the simplicity of upside down arches work here. 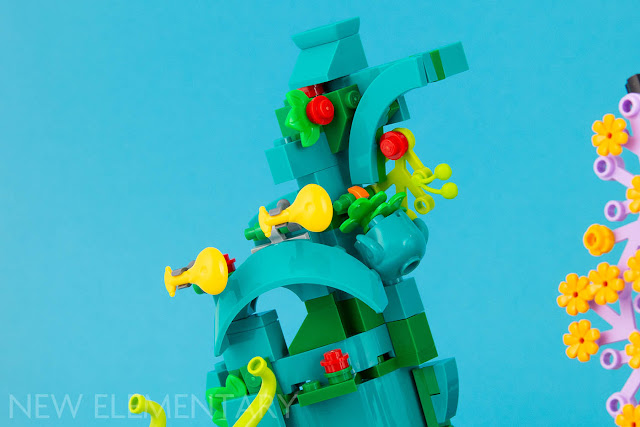 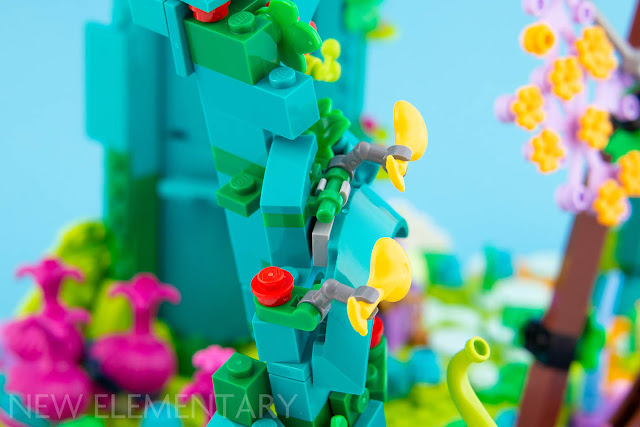 To fill the scene with nautical life I added some tiny guitars from the new Trolls accessory bag as fish, and combined lime cherries with lavender eggs to create two hermit crabs. 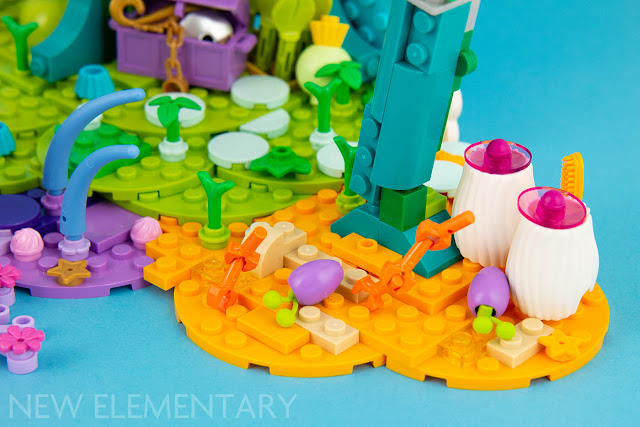 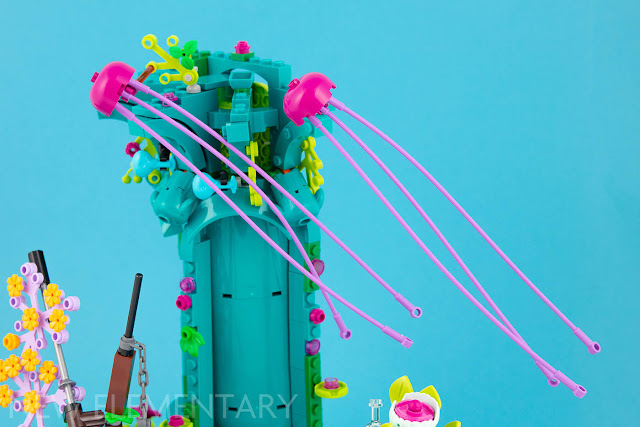 For the jellyfish I made use of the long cables in Medium Lavender and the 3X3 Domes in Bright Reddish Violet/ Magenta (with the printing turned to the back). Squeezing the cables into the dome is surely no legal technique, but as they have soft ends it works very well. 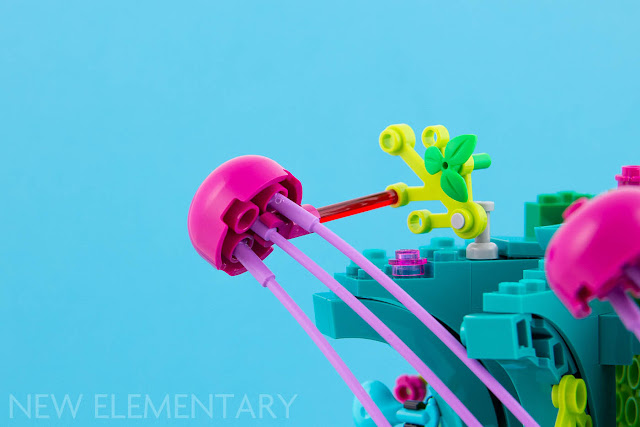 And I almost forgot: I also built this little crab. 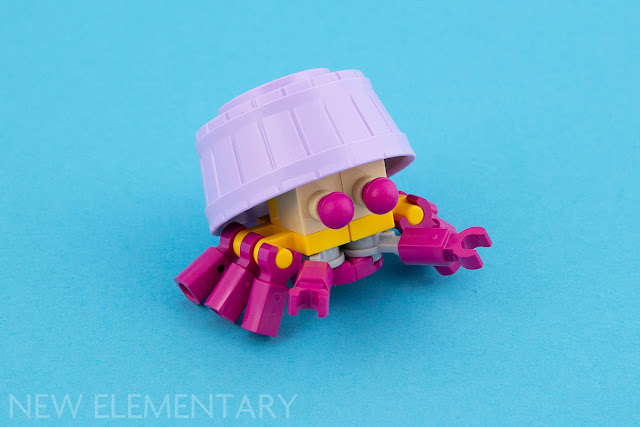 Originally it was to go with the diorama but as my girlfriend adopted it, to let the cute little guy sit on her desk, I missed integrating it for the photoshoot! So it gets its own picture here.

Unfortunately I didn’t include one of the new pods or big balloon pieces. 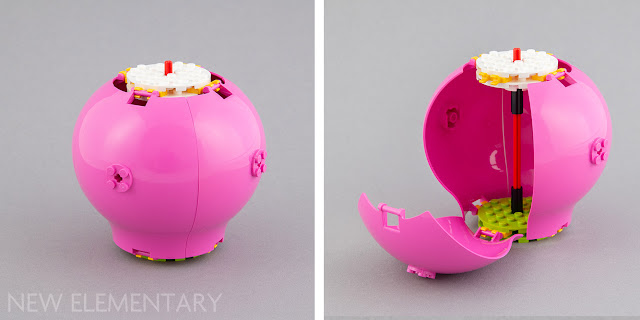 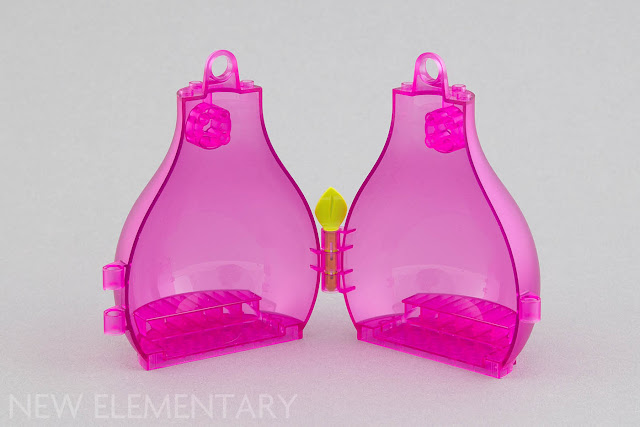 I had the idea to make a giant squid, but couldn’t pull it off, because I was missing enough joints. Anyway I’m happy how it turned out and glad I could finally try out building a coral reef. 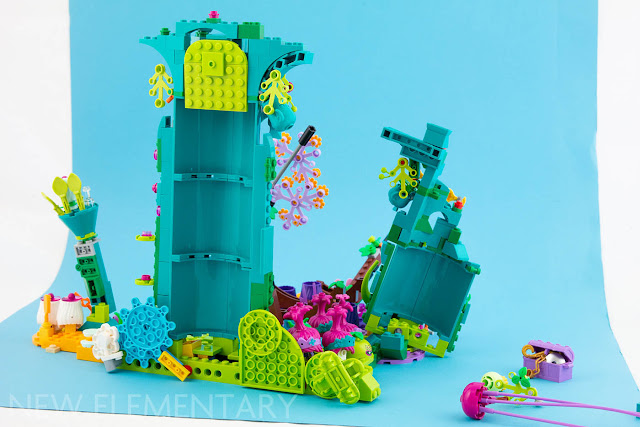 And here is a 'behind the scenes' pic! 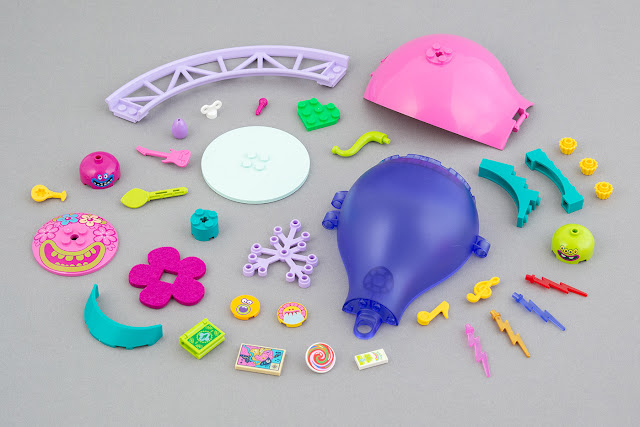 Do the new Trolls pieces inspire you to build? What would the pods turn into in your hands? I’m keen to read your ideas!

READ MORE: Enter our building contest for a chance to win a LEGO Fiat 500

Products mentioned in this post were kindly supplied by the LEGO Group. All content represents the opinions of New Elementary authors and not the LEGO Group. All text and images are © New Elementary unless otherwise attributed.
Posted by: Admin Posted on 4/30/2020 07:41:00 am
Email ThisBlogThis!Share to TwitterShare to FacebookShare to Pinterest
Labels: Alternate build, Trolls