The next builder in our LEGO® parts festival is Simon NH, a talented guy from Austria who is best known for his clever use of parts, especially novel ways to create textures and patterns. 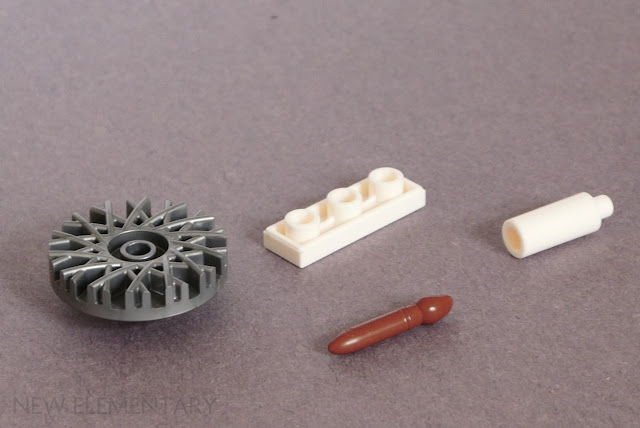 Sorry, no offence with my use of the paint brush, but that was just too fitting! 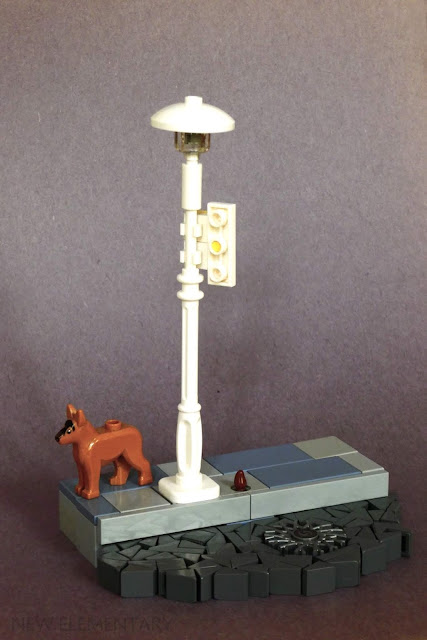 Organic pieces have a tendency to be large normally but this the paint brush is not; it is very useful for building all sorts of trees and bushes, or maybe a fox's nose?

We’ve had inverted tiles since 2012 with the release of the 2x2 inverted tile. The 1x3 inverted tile is not just a new size in the collection but adds a whole new level of possibilities with the inclusion of a hole in the centre. The hole connects a 3.18mm bar so for the scene above I was able to connect to the element from behind using a Plate 1X2 W. Vertical Schaft (88072), which also simulated a yellow traffic light. 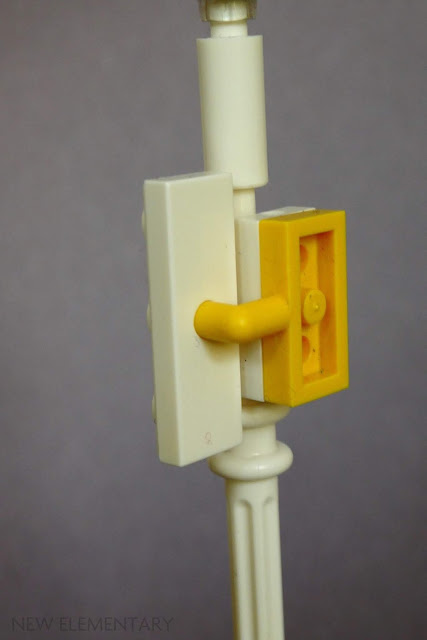 The new wheel mesh from the James Bond Aston Martin has an interesting texture. I used it to create a sewer cover in the first build but it can also represent the tiny windows for the Leaning Tower of Pisa. 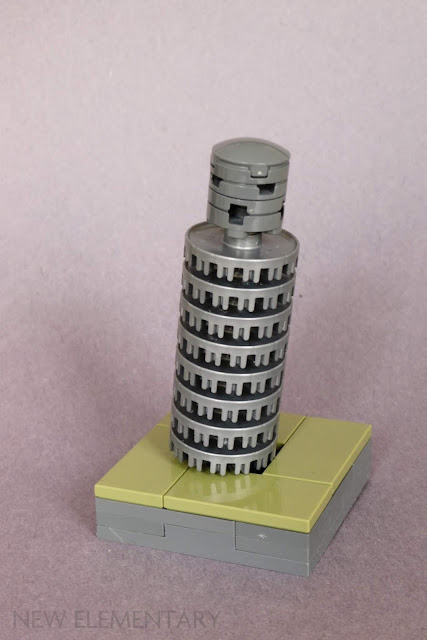 I had to use some sort of 'parts dumping' technique to integrate the wheel in the floor, I really hope LEGO creates an arch with a 3L diameter one day.

I instantly knew I was going to build a roof with the Black 'floppy puppy ear', Design Plate 1X1 No. 1 (Element ID 6231382 | Design ID 35463). These funky fellas are definitely one of the most memorable new shapes of 2018 and already used in lots of cool ways in various creations from various builders. Although the proportions do feel a bit random at first glance, they're actually deeply grounded in the LEGO Mathmagic (as I like to call it). The little triangle is six half-plates high (which equals the height of a standard brick), also six half-plates wide and 1 half-plate thick. This perfectly matches the dimensions of headlight bricks laid sideways, as you can see below. 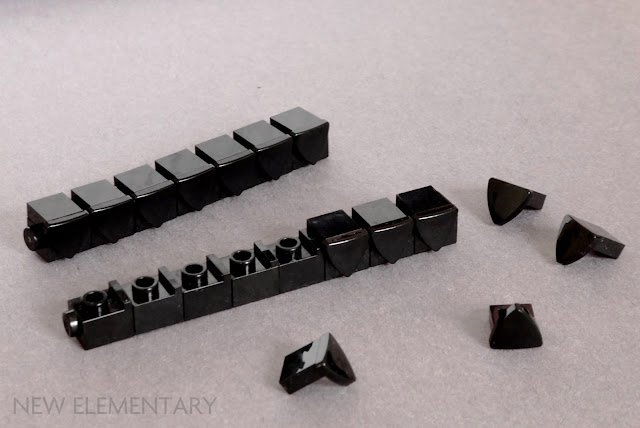 I didn’t come up with a satisfying, tidy solution to mount these stripes in this very specific offset pattern, so I used some layering techniques to create this example. Feel free to try yourself and let me know if you find a way. 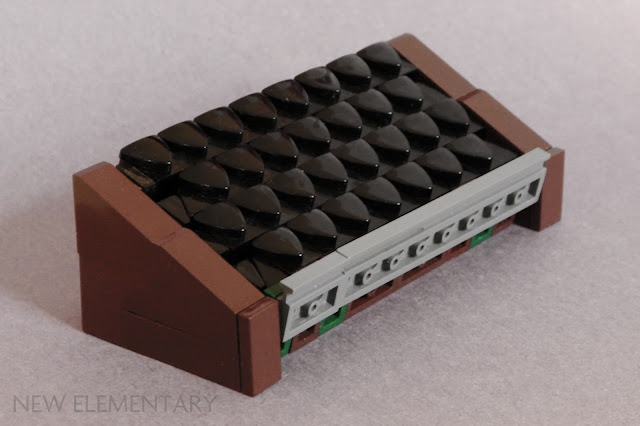 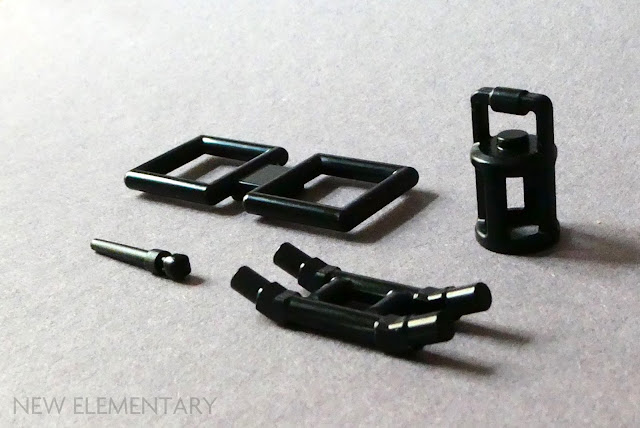 I’ve been wanting to build some micro Japanese Architecture for over a year now. Since the assortment of concave LEGO parts is very limited, all I’ve ever got as a result was a headache when trying to figure out a way to build the characteristic curved roofs. The new pantograph shoe parts inspired me to give it another try. I also had the chance to use an old colour - Medium Green, and a very, very old element - White Door 1 x 2 x 3 Right (BrickLink ID 33bc01) from 1969 which I used for the beautiful windows. 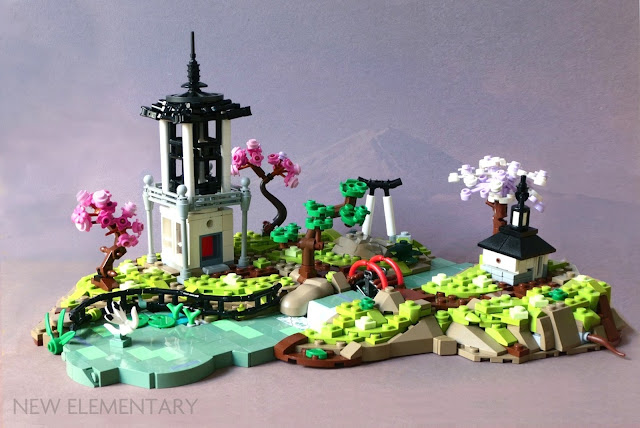 When looking closely (click/tap to enlarge) you can see I incorporated the paint brush once again for the logs forming the bridge and also in one tree on the left. I also utilised the 1x3 inverted tile in the small teahouse. I placed a cut 3mm hose in Reddish Brown inside the hole to create the illusion of a round Japanese window. The new lantern was a fun way to add some more black-and-white texture to the top part of this little building.


Breaking down the elements

Let’s take a closer look at the main structure. The midsection of the tower mainly consists of candles and the BrickHeadz glasses, I think the little square pit in the underside of the glasses adds a decent little detail. 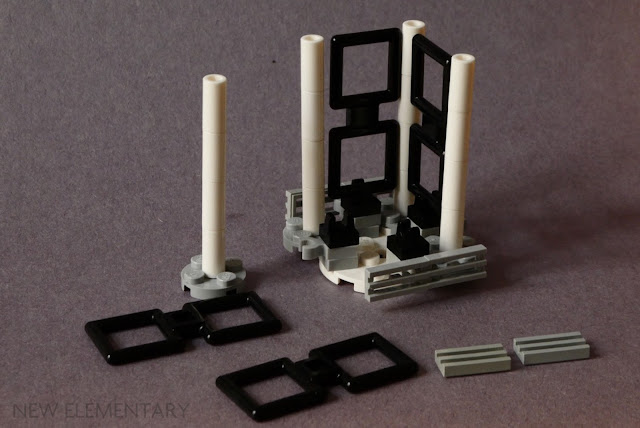 My personal favourite section of this creation is the roof, though. In combination with some newer hinge pieces, Holder Ø3.2 W/Tube Ø3.2 Hole (11090) and 3.2 Shaft W/3.2 Hole (23443) the train pantograph shoes automatically form that characteristic curved star-shape. 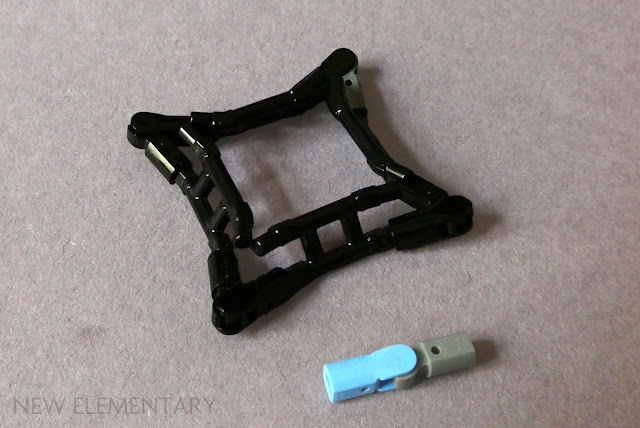 I attached some robot arms and squeezed in a little cross to finish off, while a raised wand forms the very top of the temple. 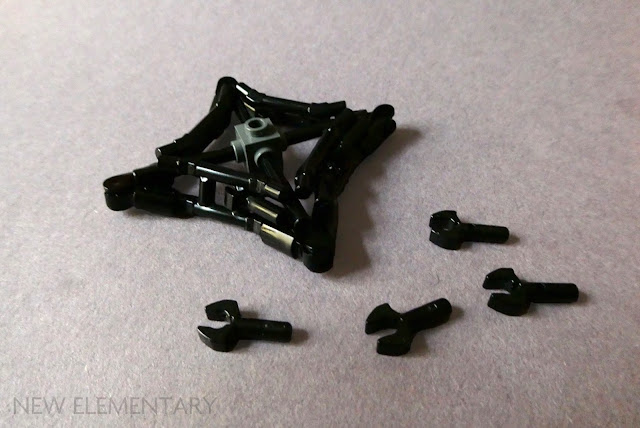 So that’s it! It was a lot of fun experimenting with these parts, and I hope it was sort of inspiring in some way. I am looking forward to seeing what pieces 2019 has to offer and seeing you guys use them in some cool way. Keep it up!


Products mentioned in this post were kindly supplied by the LEGO Group. All content represents the opinions of New Elementary authors and not the LEGO Group. All text and images are © New Elementary unless otherwise attributed.
Posted by: Elspeth De Montes Posted on 2/04/2019 04:42:00 am
Email ThisBlogThis!Share to TwitterShare to FacebookShare to Pinterest
Labels: Community, Parts Festivals, Technique