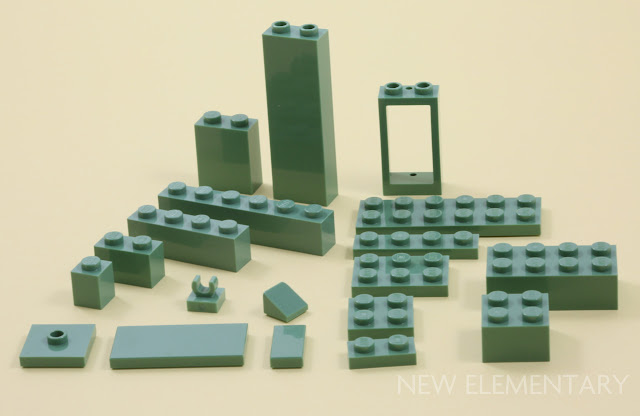 There are 312 Sand Green parts across 20 different elements: namely the 19 elements pictured above plus a single printed element I will mention later. The larger volumes are mainly bricks: 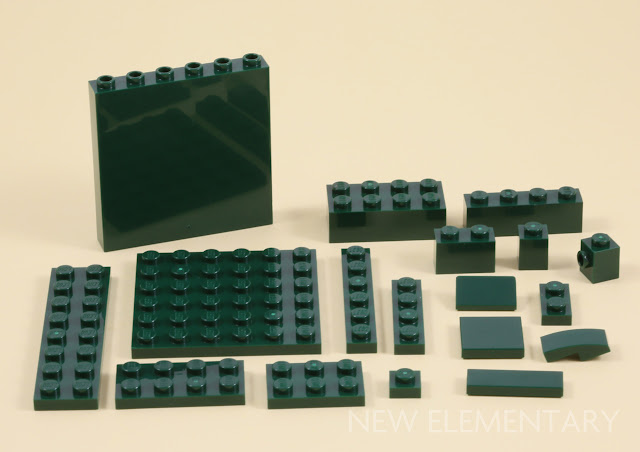 There are also 21 different Earth Green elements that add up to 300 parts in this set, most of which are pictured above. In this colour, the majority of the larger volume elements are plates:
While Minecraft sets are not for everyone, looking at this set as a parts pack really opens up the building possibilities for fans of green! 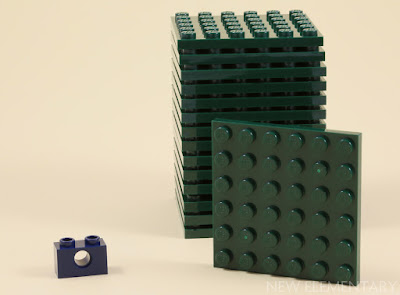 Alex’s Armour No. 13 (6167632|19723), Weapon No. 3 aka the blocky sword (6167566|18787) and Figure Helmet No.1 (6192830|34091) all appear in Medium Lavender for the first time. This colour is not a particular war-evoking colour in my mind. The official description says, “Put on your enchanted armor, grab your enchanted sword and prepare for action!” Enchanted weapons and armour are clearly available in less aggressive colour schemes. 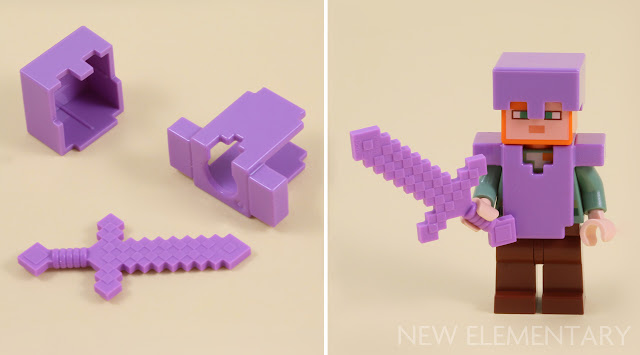 There are three parts that appear in both The Ocean Monument and ONE other set at the moment; these are worth a mention as I think they will be more useful to most builders than the printed tiles and minifigure elements, and they come in higher quantities. I’ve also included one part in this picture that is supplied in such a plentiful amount to be of particular interest as it only appears in one other set that is currently available. 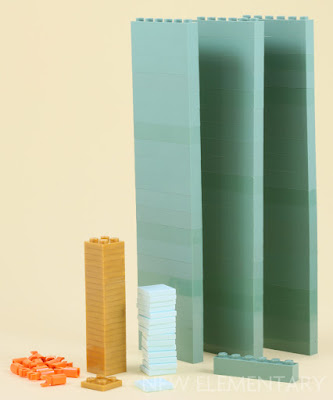 Holder Ø3.2 W/Tube Ø3.2 Hole in Bright Orange [TLG]/Orange [BL] (6162893|11090) also appeared in the summer 2017 Nexo Knights set 70356 The Stone Colossus of Ultimate Destruction. There are 12 supplied in The Ocean Monument in comparison to just one in the Nexo Knights set, so this would have been an easy part to overlook until now. 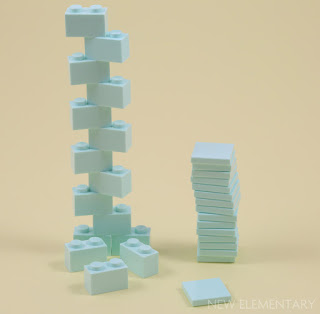 Finally, my rationale for mentioning Sand Green Brick 1x6 (6177081|3009) in this review is that the only other set currently commercially available that contains this element is last year’s Modular, 10255 Assembly Square. It contained 12, but Ocean Monument contains a whopping 61! This volume is however comparable to a couple of retired sets: there were 56 in 10228 Haunted House and 87 in 3450 Statue of Liberty. 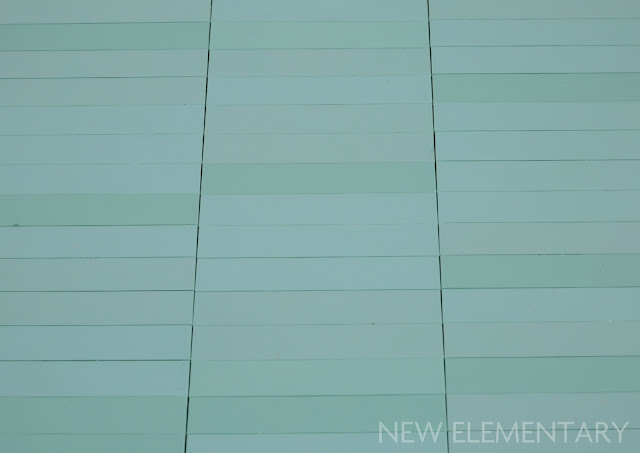 I have to quickly mention the variation in tone of the Sand Green bricks; the darker and lighter tones really stand out. For some models this will make little difference, and in fact for buildings I often think some variation in tone is beneficial. It’s just very noticeable with 61 bricks laid out for comparison. 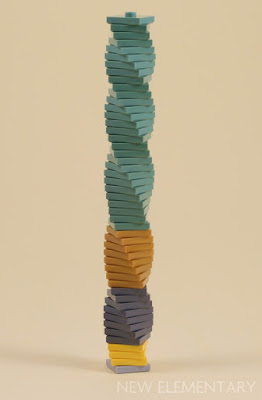 
Out of these colours, Sand Green (Element ID 6186826) is relatively rare as it only appears in two other sets at present, both tie-in sets from The LEGO Ninjago Movie: 70608 Master Falls contains four, while 70612 Green Ninja Mech Dragon contains only one. However, 32 Sand Green jumpers are in Ocean Monument which is great for builders wanting to increase their supply.

There are eight of the Warm Gold (Element ID 6107193) supplied with this set, which is worth a mention as the other sets only came with one or two. 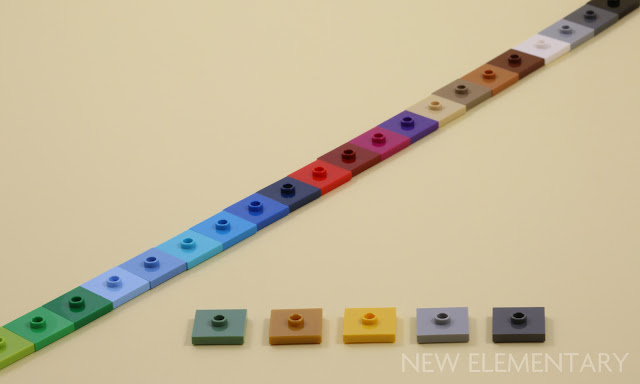 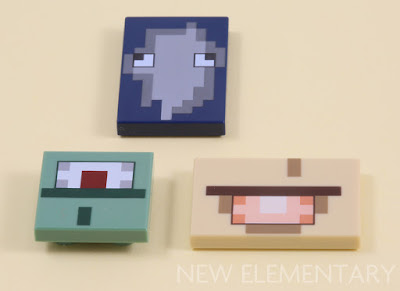 I decided to build the two guardians to show how the printed tiles are used as the faces. The little creatures are very cute and use some of the rarer parts that come with this set. They may be guardians in the Minecraft world but I am definitely getting some ‘pufferfish’ vibes. (Did anyone else love the character of the little pufferfish with a short fuse in A Shark’s Tale?)

I always like to try and think about how else I could put a Minecraft tile to good use in a non-Minecraft MOC.  This is not always easy due to their pixelated nature, although a good fallback is a piece of contemporary artwork on a wall. I did think the squid’s face looked like a nasty weather system approaching the east coast, so I couldn’t resist a quick photo opportunity. 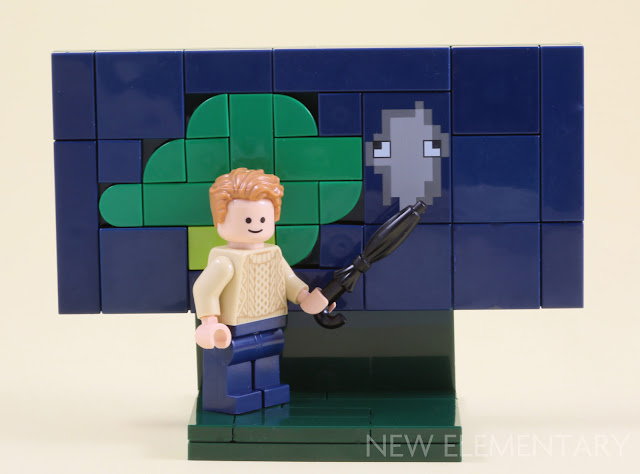