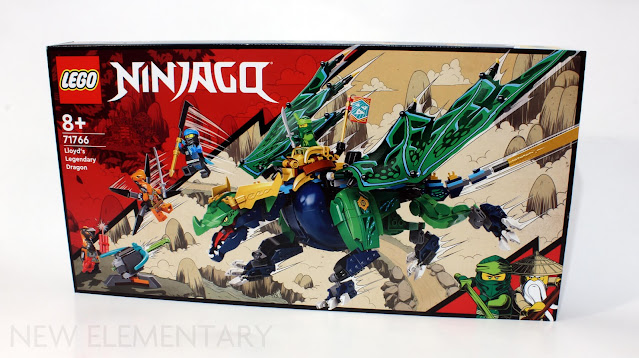 The first wave of LEGO® Ninjago sets in 2022 are introducing the new 6+ EVO subline, but there are also “regular” sets for more advanced builders. Filling the obligatory slot of ‘medium-large dragon set’ that every Ninjago wave needs is 71766 Lloyd’s Legendary Dragon, and it sure lives up to the name even if it doesn’t inundate us with new parts. Between the surprising and engaging build experience and the satisfying end result, this is a suitably impressive set to represent the evolution of Ninjago dragon design. Let’s dive in!

For a set this size, 71766 is a wee bit slim when it comes to new moulds and pieces in new colours. However, at the same time some of the new offerings are so interesting that I feel the quantity can be excused.

We already showed off the new 1x3 plate with two upward facing clips in our review of the smaller Ninjago EVO sets. The new design, appearing here in Dark Bluish Gray (6365692|79987) is used once again to connect the two jaw halves on the dragon’s head, as well as part of the assembly for its horns. Not a true POOP, as the same geometry could only be achieved with at least one extra plate thickness with pre-existing parts. We imagine this new mould will lead to some fascinating solutions to System math issues.

Even more exciting for me considering my building style is a new mould designed with large joints in mind.

These past few years Ninjago and Monkie Kid designers have been figuring out ways to build discreet but sufficiently strong joints for larger and large mecha, and it seems this predicament has become prominent enough to warrant its own new design. A turntable-like element intended to interact with Flex Joint 6M, Ø24, Male (44224) on one end and a pair of Joint Link W. Bush (47455) pieces on the other creating a sturdy click joint that can interact with Technic subassemblies.

Interestingly, it seems like LEGO is retooling the ball joint socket wherever it might pop up. While this new tooling appeared on renders of late 2021 sets, it didn’t actually appear in the brick until now. Presumably more sturdy, the hole on the side of the cup is now covered by another strut, and on the 2x2 brick modified with a socket we get two wee dimples. After playing around with the new versions a bit, I couldn’t really find any meaningful functional difference (my usual method of “just jam small bits into the gaps” yielded no results this time) but the change is interesting nonetheless. 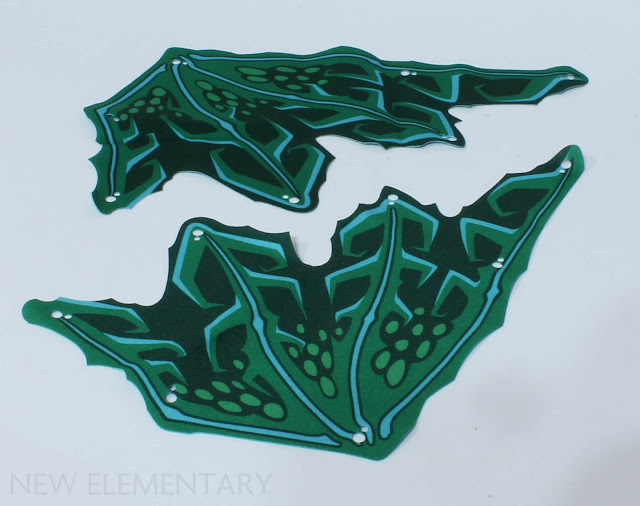 As is often the case, we also get a pair of new cloth wings with the dragon - for more on these wings and other cloth elements, stay tuned to New Elementary in early 2022…

As far as pieces in new colours go, we get a pair of curved bits typically used on car builds in Bright Green, joined by a printed dragon jaw mould, and another in Dark Blue. 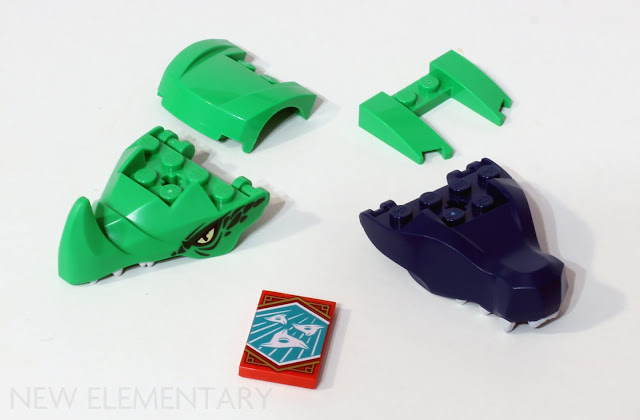 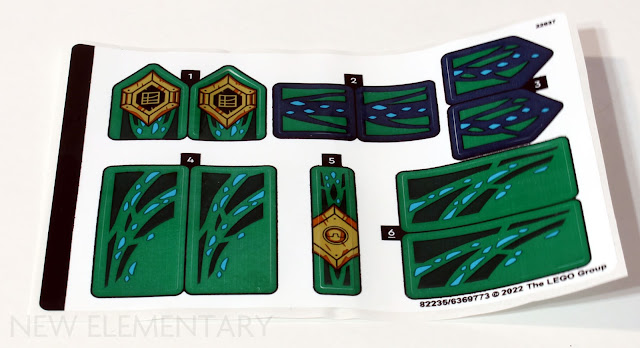 We also get another one of the 2x3 printed tiles, and a sticker sheet - I chose not to apply the stickers when building the set. 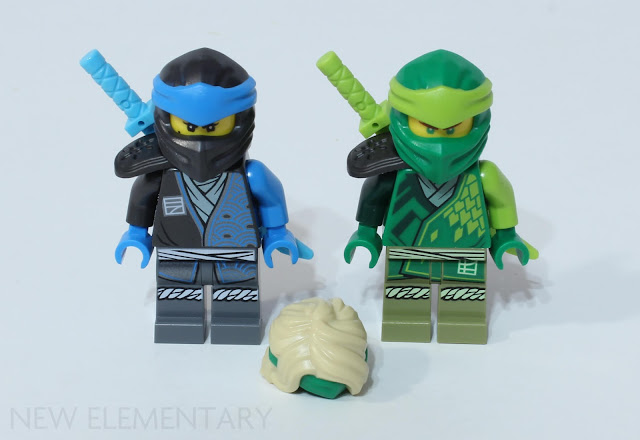 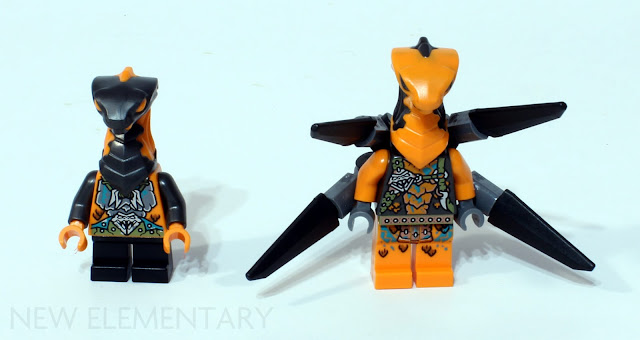 We also get two of the snake baddies, Python Dynamite and Viper Flyer, who also appear in the smaller EVO sets.

Before we get into the build itself, an interesting thing to note is that it seems Ninjago has adopted some of the instruction flair that was introduced in Monkie Kid. Perhaps all new LEGO sets have, but I haven’t sampled other themes’ offerings from 2022.

The instructions have a little progress meter on the bottom in the form of a “loading bar” with a - stud showing how far along you are and whenever a sub-assembly is attached to whatever portion of the set you’re constructing you see extra visual embellishment. 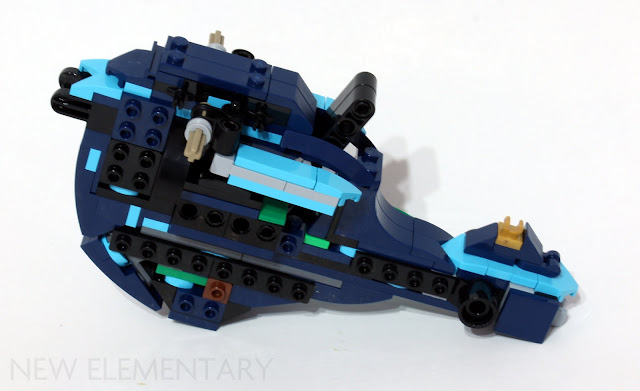 I was thoroughly impressed throughout the build process. The Ninjago dragon formula had been pretty ‘figured out’ for a few years now, and while the past dragon sets have all been competent with some standouts (looking at you, Jungle Dragon) the formula has become a bit stale. 71766 still utilizes some of the techniques we’ve come to expect from dragon sets but also does its fair share of reinventing. 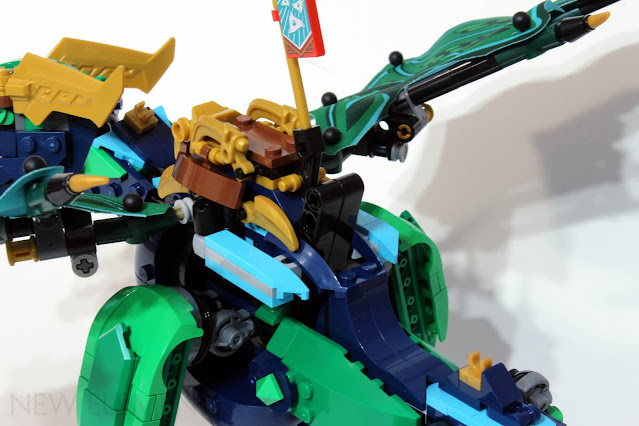 We’re still mostly constructing a studs-up, narrow torso section with a ton of brackets filling the sides with studs waiting to be covered, but the unusual proportions of 71766 leave us building vertically a lot more than usual. There’s also a fascinating wing flapping function relying on Mixel joints that gives the process a few surprising twists. 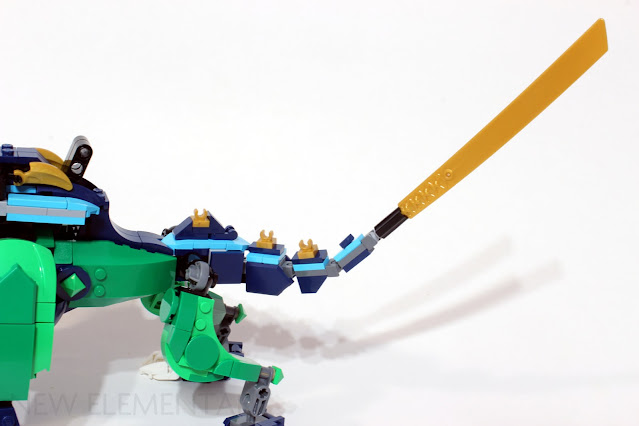 As interesting as the body and forelegs are from a building standpoint, the tail and rear legs fall back into Ninjago dragon tropes. This is not necessarily an indictment, since why change that which works? Additionally, my pet peeve of dragon sets - floppy tails, I despise floppy tails - is mercifully absent. Since much of the tail’s length is given by a single large blade piece, we don’t find ourselves doing a lot of repetition for the digits. 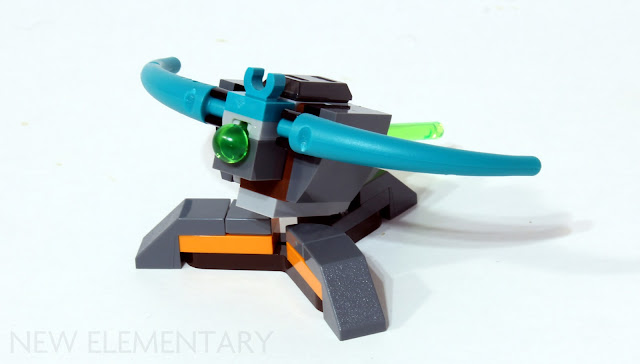 In a small break from the dragon itself, we take a few moments to put together a little ballista for the snake enemies. It is clearly outmatched and also feels a bit like an afterthought next to the main attraction, but I understand the play value of “conflict in a box”. 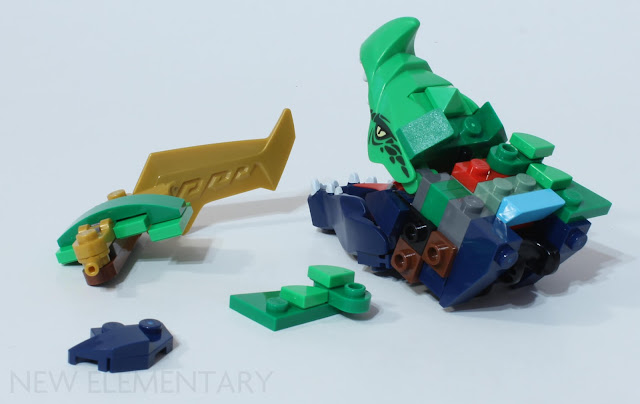 The absolute standout here is the head. This is one hell of a dragon head. Most Ninjago dragon heads get things done with a few plates and slopes or some prefab dragon jaw bits. Not 71766. The prefab jaw pieces are present, but they’re connected with a surprisingly piece-dense assembly that feels more like something out of a MOC, juggling half-module offsets at plate-to-plate thickness layers. This is an 8+ set, but compared to the 6+ EVO dragons it’s a world apart. 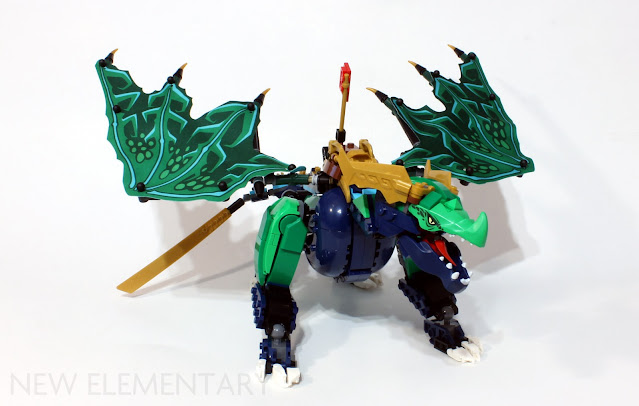 Once built, Lloyd’s Legendary Dragon flourishes its complex gradient-like colour scheme and unique, fresh proportions. The wing flapping function is satisfying, the tail can be posed and the head which features such a great build also looks fantastic when finished. If I were to nitpick, the way the toes are aligned differently on the feet looks a bit off, and the wing flapping function does impede wing posability, but at the end of the day the set is a tour de force in Ninjago dragon set design. 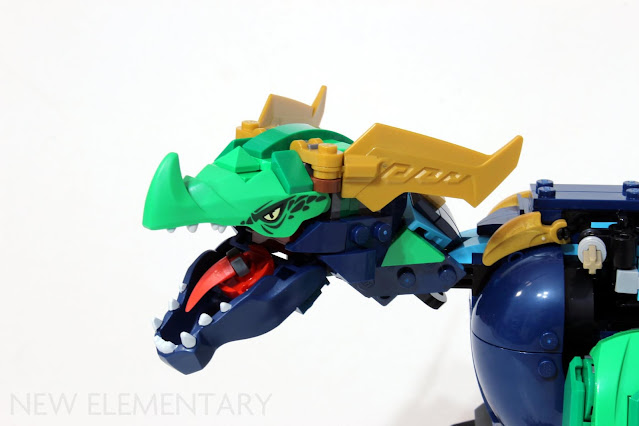 Considering 71766 pulls off what feels like the debut of a new era as far as dragons are concerned with so few new moulds and recolours, it’s ane impressive achievement. Though the new moulds we do get are mighty interesting, and I can’t wait to use them for some MOCs in a separate article once we’ve finished off the set reviews.