TobyMac (@toby_mac83) takes some of the Stuntz subtheme for a spin: LEGO® City 60298 Rocket Stunt Bike, 60297 Demolition Stunt Bike and 60293 Stunt Park. Buying these? Consider using our affiliate links, New Elementary may get a commission: UK LEGO Shop | USA LEGO Shop | Australia LEGO Shop, for other countries 'Change Region'. Products in this article were provided by LEGO; the author's opinions are their own. 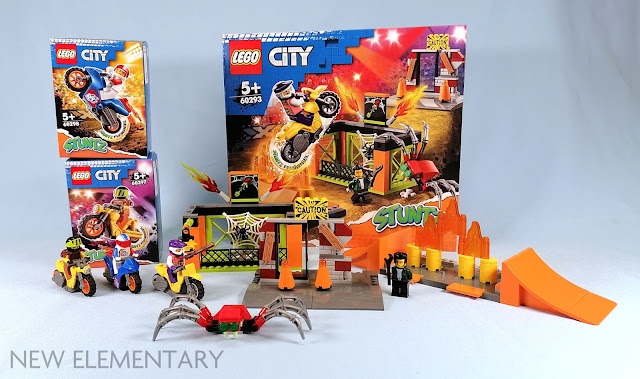 The October 2021 addition to the LEGO City Universe was a team of stunt-racers. These daredevils all have newly moulded bikes and ramps to perform the craziest stunts. I’ll be taking a closer look at these new moulds and figure out if this new series of sets are as entertaining as they sound.

There are 10 sets in the subtheme and with 4 of them you can build sections of a stunt park. The other 6 are small sets containing 1 bike and 1 minifig, sometimes along with a few accessories. I’ve picked 3 sets that will provide me with all new chassis and fairings, along with the new ramp parts and some nice recolours. Together, I think they will give us a good representation of the Stuntz subtheme. The selected sets are 60293 Stunt Park, 60297 Demolition Stunt Bike and 60298 Rocket Stunt Bike. 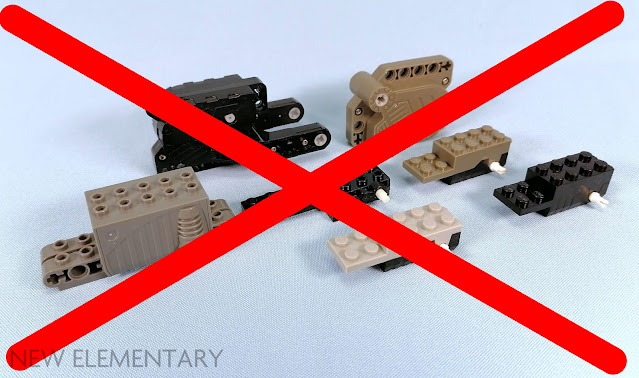 Right off the bat, I already made a mistake. I wrongfully thought the bikes featured pull-back motors, and I ordered all types of pull-back motors I could find for a comparison! But as it turned out, the bikes feature a flywheel. This is a heavy wheel connected to the rear tire, that due to its weight tends to stay in motion once spinning. So, if you move the bike forward and release, the bike will keep going. The fun begins if you can make the rear tire spin as fast as possible to really propel the bike fast. There's a video at the end of this post. 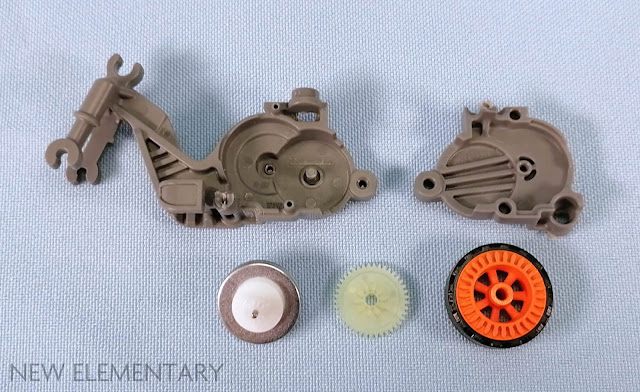 It turns out, it is possible to open the chassis without causing too much damage. The wheel can be taken out simply by unscrewing the axle. The chassis itself is a bit more difficult, but with some patience and a drill I managed to get it open while still being able to close it afterwards. Inside we find a gear and the flywheel itself. The flywheel is a relatively heavy metal drum that gets spun very fast by the gears when the rear wheel turns. Due to the weight and momentum the flywheel will keep spinning for a long time with enough force to propel the entire bike forward. 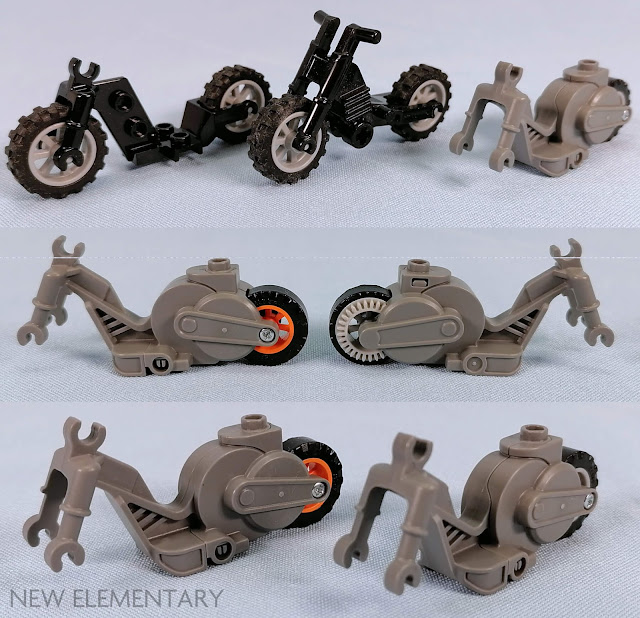 The new bikes are made out of a chassis, a fairing and tires, similar to other bikes from the past decade. The main difference is the rear tire which is permanently connected to the chassis. In the image above, I’ve placed the new chassis (Dark Stone Grey / Dark Bluish Grey) next to 2 other chassis currently in production (Black). The fairings for the older chassis do not fit on the new chassis. The chassis comes in 2 versions, both in Dark Bluish Grey: with a Light Bluish Grey rear tyre (6391389 | 69869) or an Orange rear tyre (6391388 | 69869). The chassis is extra buff to fit the flywheel and nearly touches the ground to add extra stability. 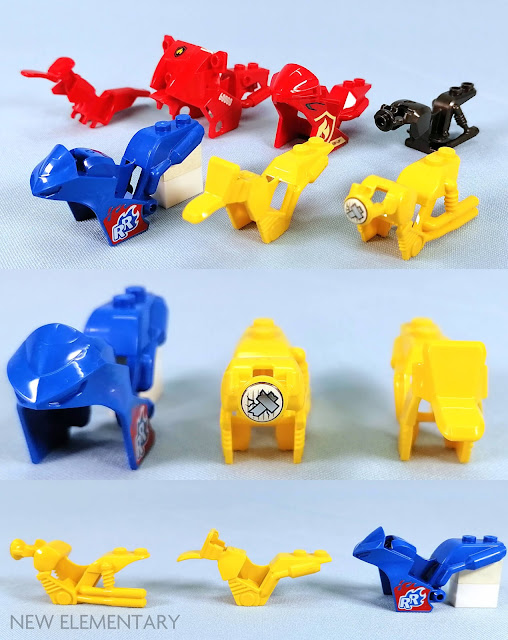 There are 3 new moulds for the fairing. From left to right: 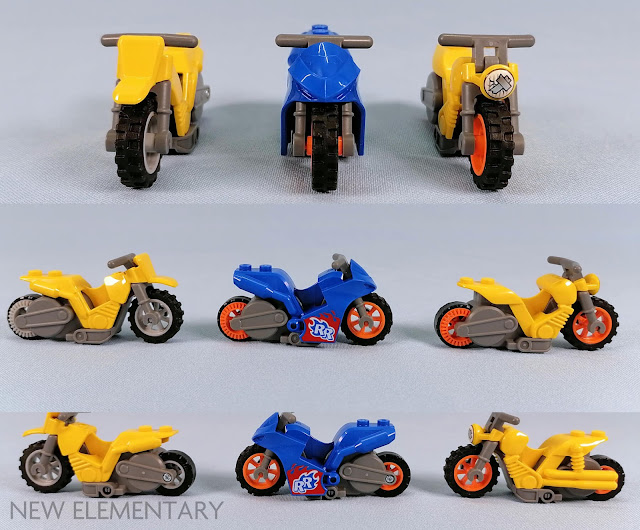 The bikes are easy to put together: click in the front tyre, slide the fairing on the chassis, and attach the steer. They look really good, with the flywheel nicely hidden inside. I did notice that the minifigs have a hard time staying on. There is little clutch between the center divide and the fig’s legs, so the figure is mostly kept in place by the hands. 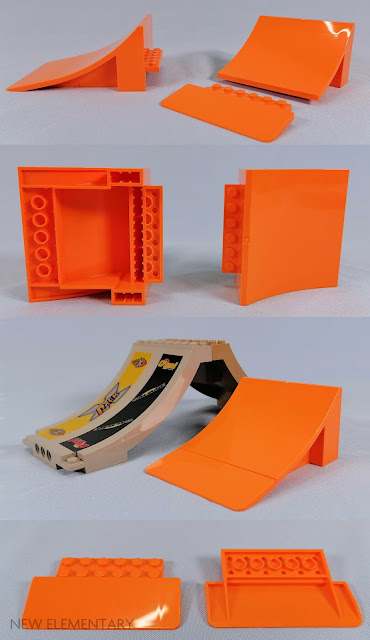 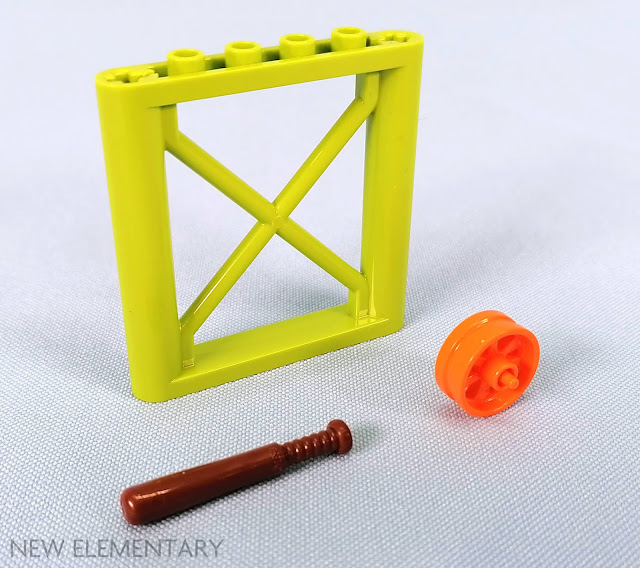 There are 3 recolours in the sets I picked: 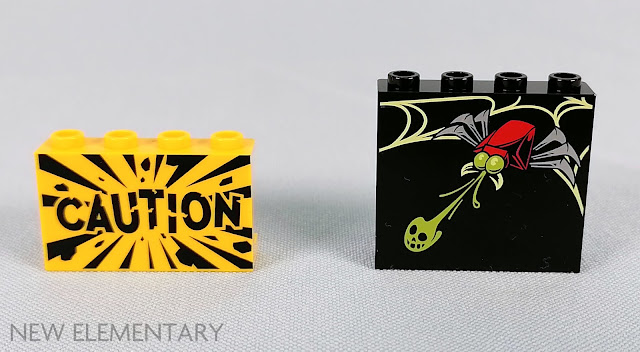 The sets come with 4 figures. 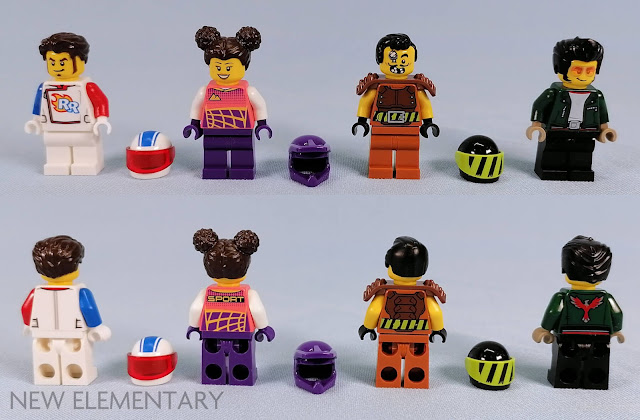 On the left is Rocket Racer from 60298 Rocket Stunt Bike.

The third is Wallop from 60297 Demolition Stunt Bike.

And the last one on the right is Tread Octan from 60293 Stunt Park.

Lastly, there are some rare elements. 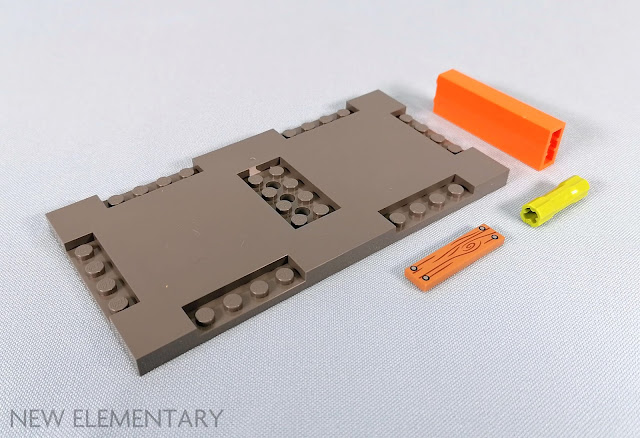 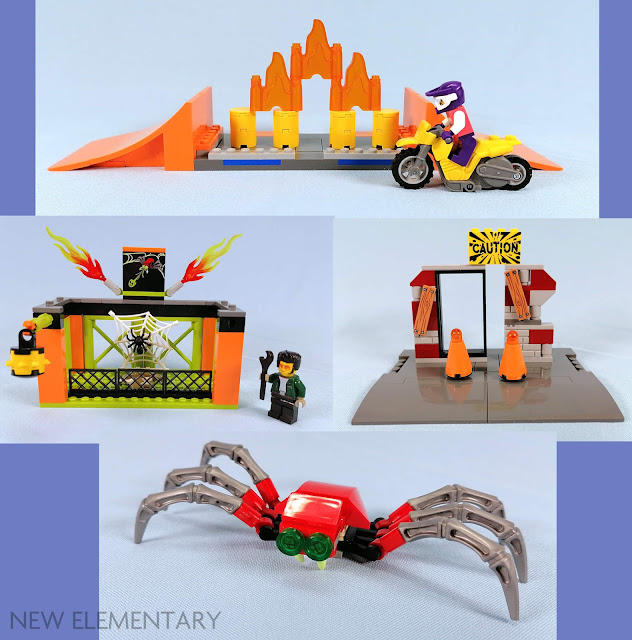 The focus of the Stuntz series is clearly on the playability as the build is simple and fast. The 2 small packs are just a bike and a fig and are done within 2 minutes. The 60293 Stunt Park offers some more build-fun, but still feels a bit fast. The build consists of 3 sections. The first section builds the ramps along with some barrels and flames. Section 2 gives us traffic cones and a couple of loose wall-sections to drive through. The 3rd section takes the longest to build. First up is a very cute spider. Next is a cage-type of building with an arm sticking out. On the arm hangs a spiky ball that the stunt driver can hit off with a bat.

So, with little focus on the build experience, how is the playability? Well, I can sum it up in one word: AWESOME. Building mostly 18+ sets, it’s been a long time since I had so much fun playing with a set. The premise works flawlessly: rev up the flywheel by driving it a few times fast on a surface, place the bike in front of one of the obstacles, and just let go. I had no trouble aiming the bike or keeping it balanced enough to stay upright. I gave my children (11, 9 and 6), and they had a blast too.

I’ve shot a few videos to show you the bikes in action:

The new moulds offer a great expansion for the vehicles in your LEGO city. I hoped the fairing and chassis would be interchangeable with the older bikes, but with the flywheel in the way that was not possible unfortunately. From a New Elementary standpoint: with the main focus on playability there are not many parts in the set, so if you’re not interested in the bikes these sets might not offer you much in terms of MOC feeding.

READ MORE: What new LEGO® pieces were released in January 2022?

Posted by: Admin Posted on 1/06/2022 10:29:00 am
Email ThisBlogThis!Share to TwitterShare to FacebookShare to Pinterest
Labels: City, Set review