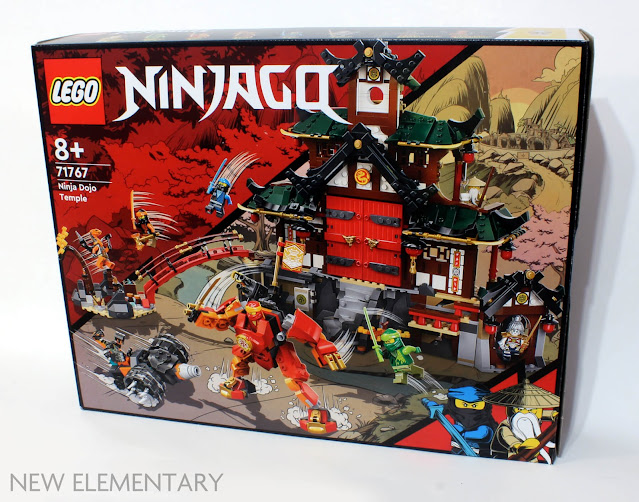 LEGO® Ninjago 71767 Ninja Dojo Temple is the largest set in the first wave of 2022 sets, coming in at 1394 pieces at the $99.99/ £89.99/ 99,99 € price point. Sharing shelf space with the EVO sets and Lloyd’s Legendary Dragon, it sprinkles a bit of the new SCCBS system into a more traditional playset. Let’s see if this is a dojo worth training in, or if the ninja should look for a new home!

The nearly 1400 pieces included in 71767 include a few new moulds and the set is surprisingly light on recoloured parts. Let’s take a look.

In terms of new moulds, the EVO system dominates, thanks to the inclusion of Kai’s mech. 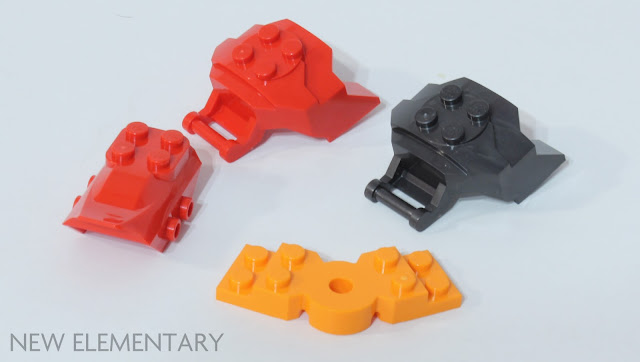 We dove into those pieces in a previous review, so let’s focus instead on the new moulds that haven’t yet enjoyed the spotlight. 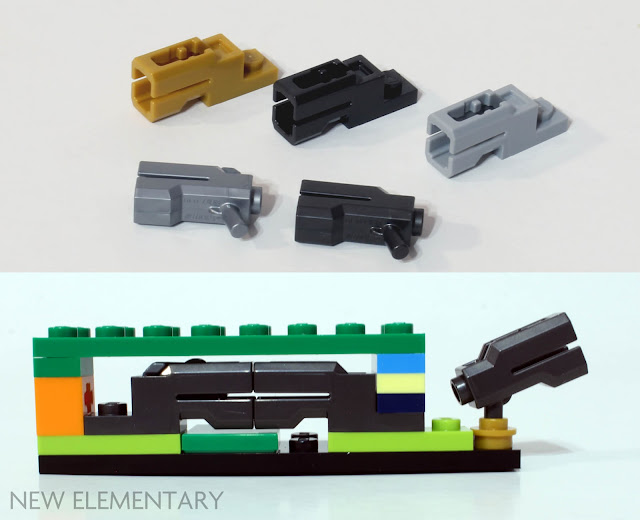 In 2022 LEGO has introduced a new stud launcher design, coming in both a studded/anti studded version (69754) and a version with a 3.18mm bar for minifigures to hold (69767). While 71767 only contains one of the studded versions in Pearl Gold (6345949), we’ve decided to look at both variants in various colours in this review.

Once again, the launcher consists of a main body, and a separate trigger piece which isn’t designed with any other connections in mind. Unlike the previous stud shooter, here the ammo actually goes inside a barrel compartment, and the design is capable of shooting both studs and 1x1 round tiles.

The new design is a marked improvement over the previous variant in more ways than one - both from a play and a MOC building standpoint. In terms of play, it is more versatile in accepting both studs and tiles, and with the ammo being inside a compartment rather than on the outside, children are less likely to lose the ammo. This does come at the expense of being able to build onto the projectile, which the exposed antistud of the previous version allowed. 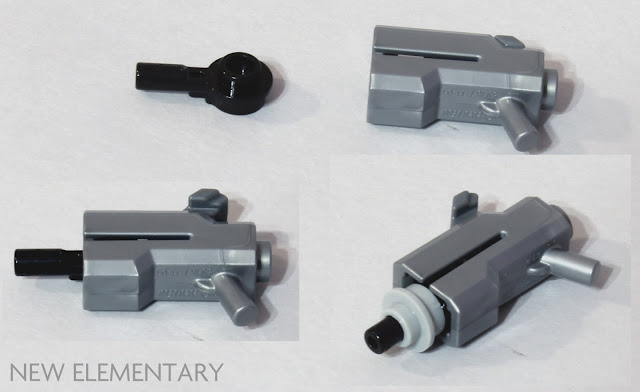 The orientation and type of ammo does offer one particularly interesting connection though - loading in an “espresso piece”, also known as Plate Round 1 x 1 with Hollow Stud and Horizontal Bar 1L (32828) gets you another bar connection - an incredibly loose one, but if you tightly push on another part, it will stabilize… somewhat. Don’t expect this to bear any loads though.

In terms of building, I feel like this design and shape is much more conducive to usage that subverts the intent. We’ve seen clever builders employ the old design as mechanical detailing, castle battlements or small statues at microscale, but the new design will definitely show up in myriad sci-fi builds as engines, details, wall elements - it just feels much more versatile when it comes to non-shooter applications. The trigger is also vastly easier to remove - reach into the barrel with any 3.18mm bar, and push upward: 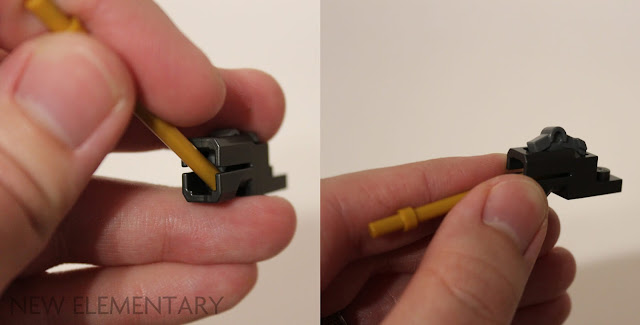 The studded version is 4 modules long, 1 module wide and a brick tall, except for the one plate tall bit jutting out in the rear. There is a cutout near the end of the actual barrel portion which does not seem to adhere to the LEGO grid, but is filled if the trigger piece is inserted. There is a small slit running down the length of the barrel, but short of threading official LEGO string through it, purist applications are nonexistent. The handheld version is more irregular, being almost 3 modules long, with a cutout on the bottom and a bar jutting out. The rear has one stud.

The trigger (6360675|69755) is a funky little mold, being designed with no other connections in mind. The highly specific geometry does not fit the LEGO System in any way, and my usual approach of “jam it into gaps and hope for the best” did not yield notable results. The “firing pin” section can be gripped by clips, but the clips are under more stress than comfortable when doing so and aesthetic value seems limited - I am eager to try and find some use for this piece when my MOC article rolls around, though.

As mentioned earlier, 71767 is light on recolours but that said, both will be welcome additions to the palette by any builder looking to recreate certain far eastern architectural styles. 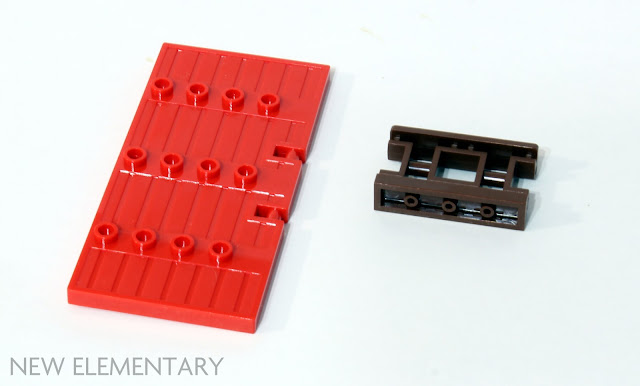 There are also a pair of new printed elements included: 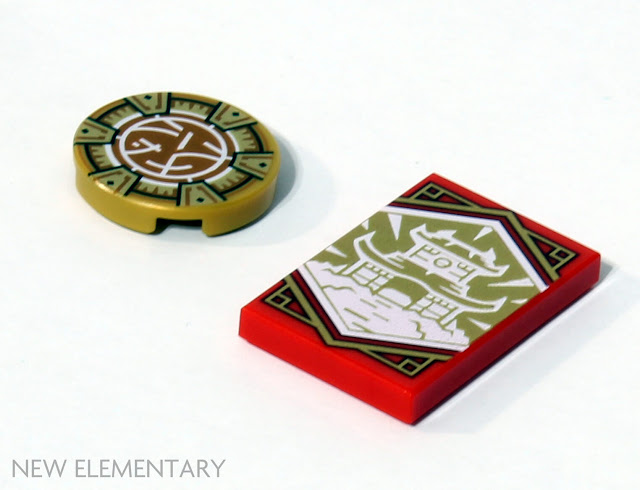 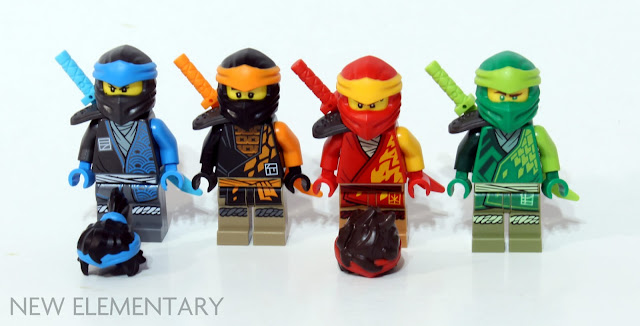 The Ninja Dojo Temple features an impressive array of minifigures, as is to be expected of a set this size. 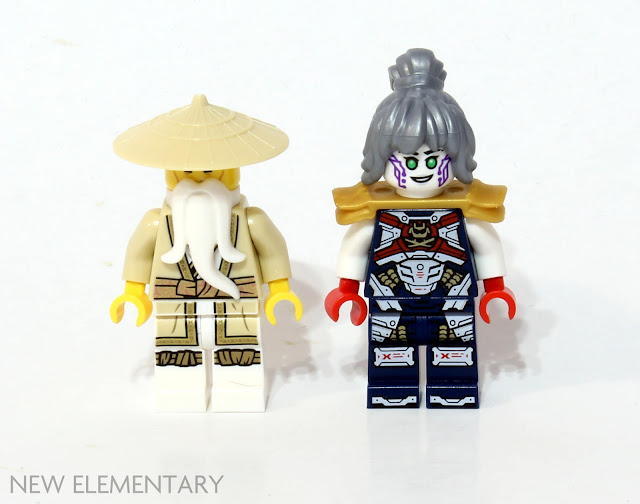 Sensei Wu does not appear in other 2022 sets, and Nya gets a hairpiece here alongside the ninja cowl that is missing elsewhere. 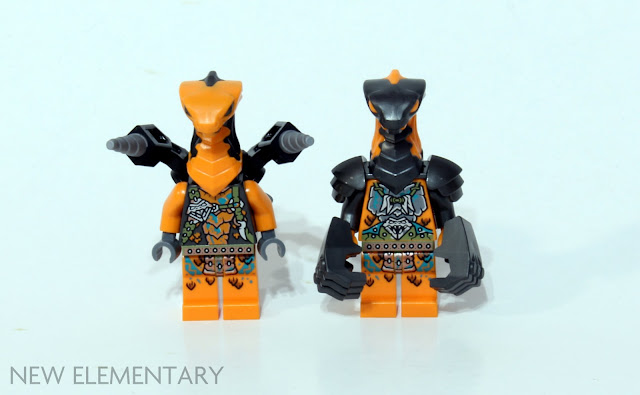 Before we get into laying the foundations of the Dojo itself, we build the snake villains’ small battering ram and Kai’s mech, using up the set’s entire crop of new moulds. 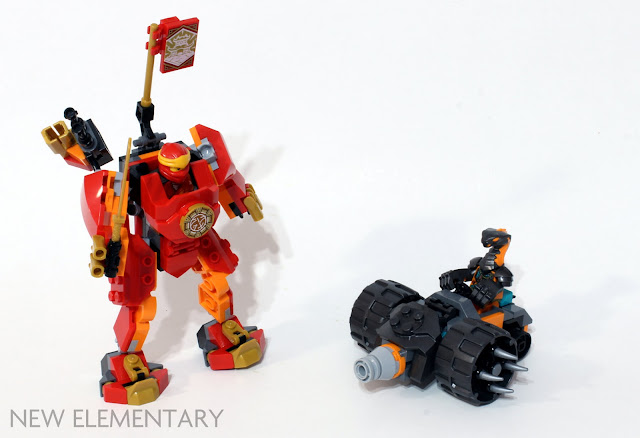 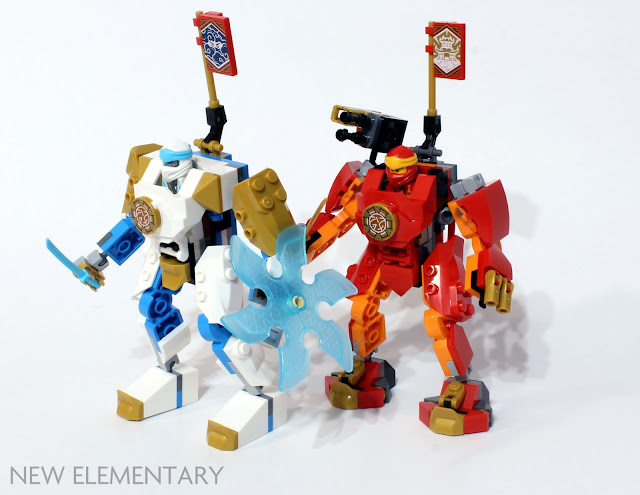 The battering ram is fairly standard, and Kai’s mech should be familiar to anyone who built Zane’s. It’s more than a simple recolour, and adds an shoulder mounted weapon as well as storage of Kai’s katana, making it a lick more complex than the standalone one.

The Dojo’s build starts off with what ends up being the most interesting part of it, as far as techniques are concerned. The stairs leading up to the main door use some SNOT techniques combined with hinges layered atop tiles for some fun, unorthodox angles. Underneath the whole assembly, we get what seems like a damp, dark toilet with cracked walls and a spider infestation. The ninja can apparently afford temples and mechs but proper plumbing is beyond the budget. 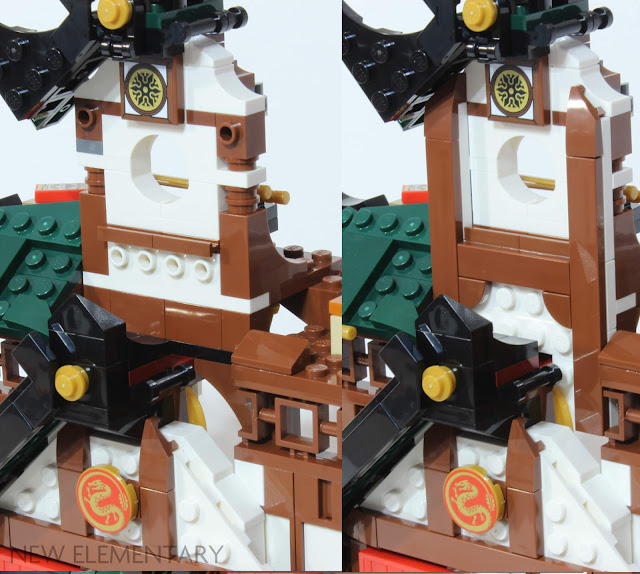 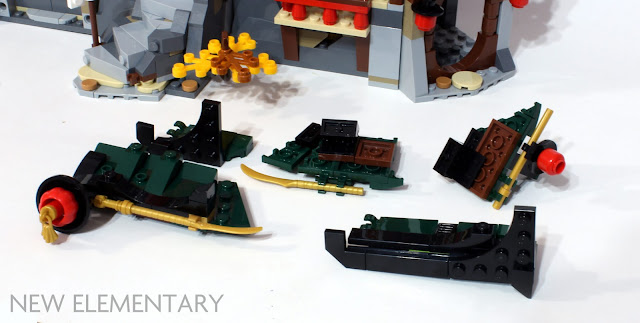 I admit, when I first built the set I didn’t take progress photos in real-time, but rather disassembled it in stages when actually shooting for the review, so things being built and not-built will be out of sequence on these pictures - that said, aside of some clever roof techniques and a SNOT facade that slots into a few architectural gaps perfectly, the rest of the build is fairly straightforward. Small details are hidden throughout, which can be appreciated once finished. On the front, we get some fun details - here, solid white window panes in brown frames are used to simulate the kind of architecture seen on buildings of this style. 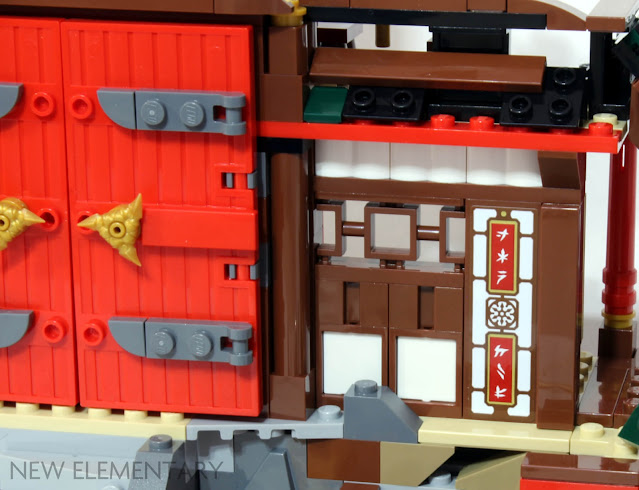 The large red doors have ‘false hinges’ built on the outside that serve an aesthetic purpose while the actual hinges are a bit more hidden - I would have preferred the clips to be red instead of dark bluish gray to better sell the illusion, but it still works.

I also enjoyed the way the red roller coaster track piece was filled out to serve the role of a bridge. 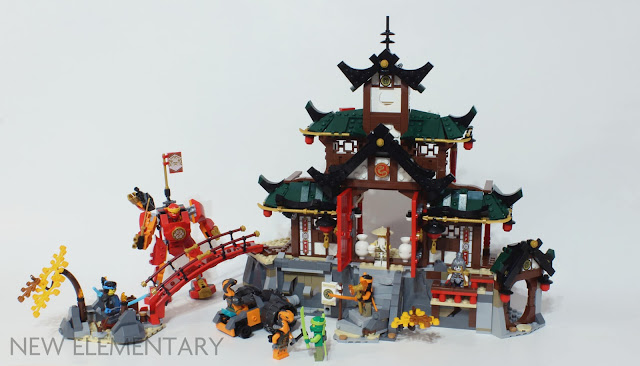 The idea behind Ninjago ‘Core’ is to be a sort of soft reset for the franchise, veering back to a baseline after many waves and seasons of highly specialized and stylised designs. The Ninja Dojo Temple definitely succeeds in terms of giving the cast a new “vanilla” HQ. 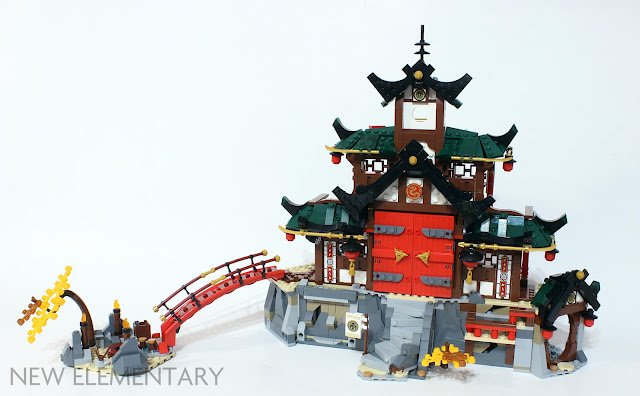 Stripping away the ninja and the mechs and the snakes, we get a good-looking and well-designed Asian temple build. It’s not flat, it’s not gappy, the roof techniques look great, and overall I feel like the set has a cozy vibe to it. Although nothing about it is overtly festive, it somehow felt appropriate to be building it during the holiday season. 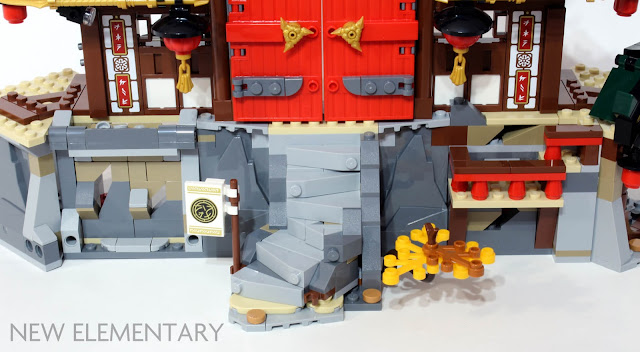 Up front we have a small balcony, a side entrance, those interesting stairs I mentioned earlier and a section of cracked wall designed to be easily knocked in by the snake villains’ battering ram. A little drain-like build above it on some frictionless Technic pins also pours down some studs when this happens. 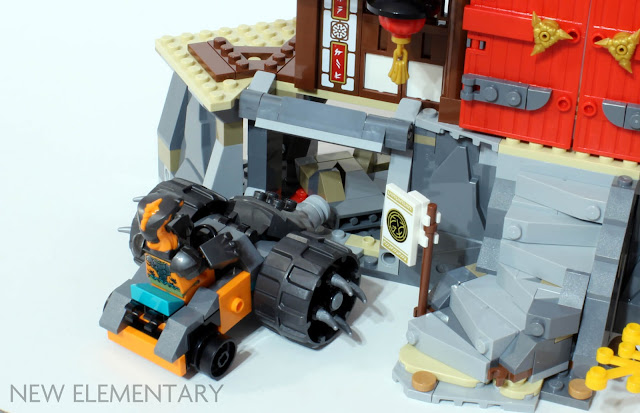 Flipped around, we gain access to the dollhouse-style interior. On the bottom floor, we have the dark and creepy toilet, an empty space behind the demolishable wall, and a small command center-like room. 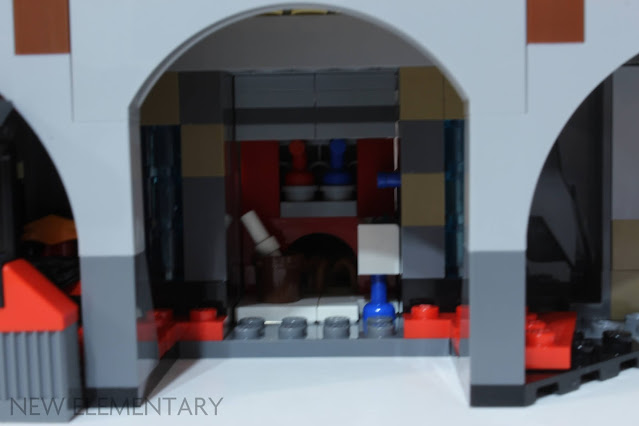 Here, affixed to a hinge is a flip-out control console for Pixal, with readouts providing information on Kai’s mech and the attacking enemies. Inside, we have an easily removable stand for either the ninja cowls, or the hair pieces. 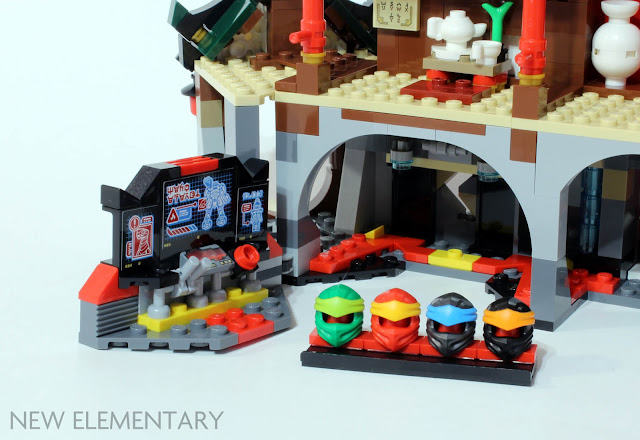 On the ground and first floors, we have some training areas, terraces, a small tea room with a stickered tile covered in an alphabet and the corresponding made-up script used in the Ninjago world. We have plenty of weapon storage around, which seems appropriate, and a small shrine to Sensei Wu, which seems to be less so since he’s still very much around. One of the vases behind the door hide a doughnut, which I assume is Cole’s doing. 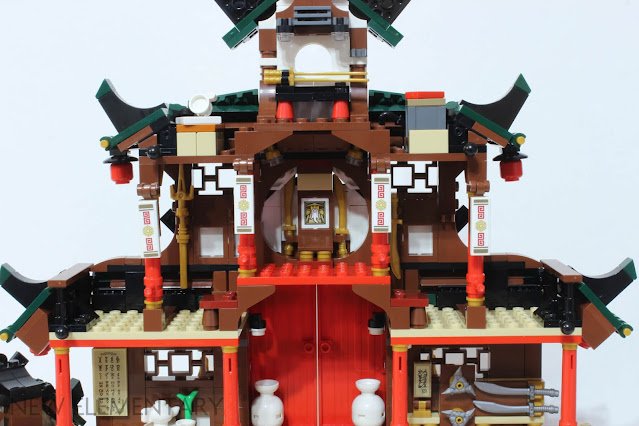 Up top, we have a small roof area with storage for various recreational accessories, like roller skates, an umbrella, and a microphone (I guess this is where the ninja hang out when not training) as well as a stickered tile depicting a newspaper onto which someone clumsily spilled their tea. Wu definitely won’t approve of the wasted brew. 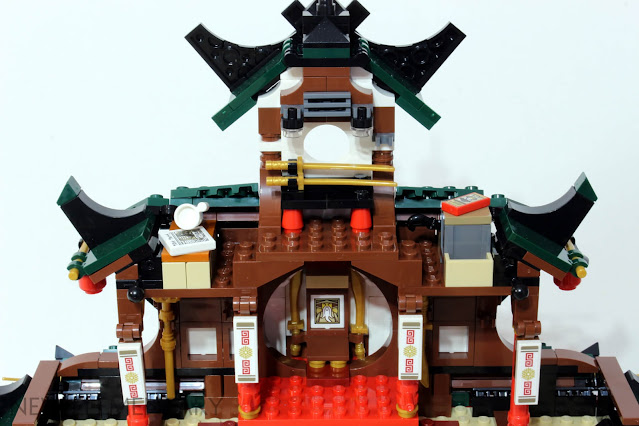 Attached to the Dojo with the bridge using the red roller coaster track is a little exterior training area designed specifically with Nya in mind. In a crate next to the bridge, we find blue power blast pieces, with which the water ninja can knock off loosely placed flame pieces from atop poles. 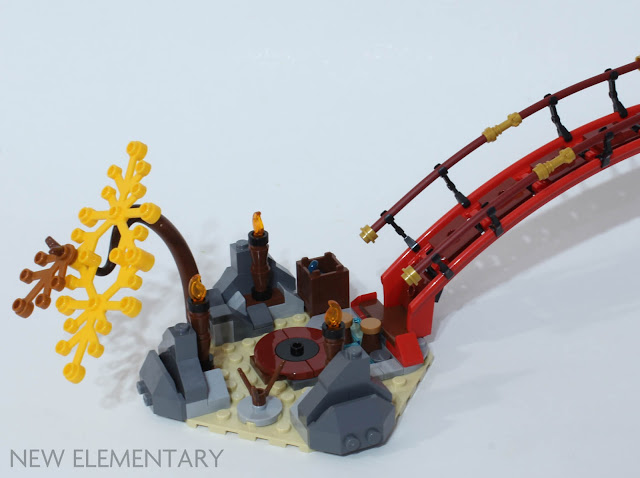 In practice, the lack of space and temperament of the power blast piece means that you probably need actual, real ninja skills to get it right. Or just small hands - did they design this for kids?

Of unique interest on the set are several unused external connection points, not unlike those found on Modulars. The back of the instructions reveal that some of these are used when combining 71767 with another 2022 Ninjago set, 71764 (which we weren’t sent for review). However, not all connection points are used, which leads me to suspect that possibly later on in 2022, a set or some sets will allow us to further expand the Dojo complex.

Additionally, the back of the set has a set of “flagpoles” onto which you can clip the red 2x3 tiles with the fancy prints from the EVO sets to further decorate the Dojo with trophies of completed missions.

I have to admit, after receiving the crop of 2022 Ninjago review sets, 71767 Ninja Dojo Temple was the one that hyped me up the least - I’m just not a dollhouse-style playset kind of AFOL - however, it ended up convincing me. I still think the Kai mech is the most fun portion of this affair, since I’m just irreparable like that, but the Dojo itself is a very solid design sprinkled with some interesting techniques and plenty of play value.

In terms of parts, it isn’t particularly groundbreaking - again, the best bits come from the EVO-based mech - but that has its merits: the designer created a compelling and great looking set without using a lot of new elements that would make me want to dismantle it for MOC fodder. The small details and various features allow for a great wealth of role play opportunities which I’m sure younger Ninjago fans will appreciate, but even if you’re not a huge fan of the theme, the dojo on its own sans mech and snake enemies looks like a beautiful theme-neutral display piece. There’s a lot to love here for various flavours of LEGO fan.

Stay tuned for what’s my favorite part of the review process - making MOCs with the new and exciting pieces!

Posted by: Admin Posted on 1/28/2022 03:50:00 am
Email ThisBlogThis!Share to TwitterShare to FacebookShare to Pinterest
Labels: Ninjago, Set review