Eero Okkonen (@eerookkonen) delivered his parts and build analysis of the upcoming LEGO® Ideas set 21329 Fender® Stratocaster™ yesterday, but left one vital conclusion for today's article: Can it be played? Products in this article were provided by LEGO; the author's opinions are their own.

This plastic guitar has 6 actual strings of different scale lengths. It has a fretboard so yes, technically, it is possible to press the strings against that and pluck or strum them. However, the frets are only printed, so while they assist with finding the correct chords, the guitar is essentially a fretless one. And more importantly, the strings are plastic, there is no electricity in them, they are quite loose and the pickups are only prints... and thus the instrument stays silent.

This is entirely expected.

This is a scale model and for me the actual strings are authentic enough. At least the box does not imply that it would be a playable instrument as was done with the PR for LEGO® Ideas 21323 Grand Piano, which was playable - to a given definition of playable - and caused some confusion if not dismay among the fans; you may check Tim Johnson's thoughts in his review. 21323 Grand Piano mimics a mechanical instrument and needs a mobile phone to make the music, while an electric guitar needs circuits and relays to begin with. Would it be optimistic to expect LEGO to make a brick-built guitar with metal strings, electronic components and a mobile app, perhaps with a phone hidden inside the amp? Probably not, but I feel that one would have been less exciting than a guitar engineered and built with quite usual pieces: flex tube as power cable and 41L round-plate-ending strings as the strings. It's a job well done, a display item but an authentic one.

However, this is not the only way to interpret the question "can it be played". 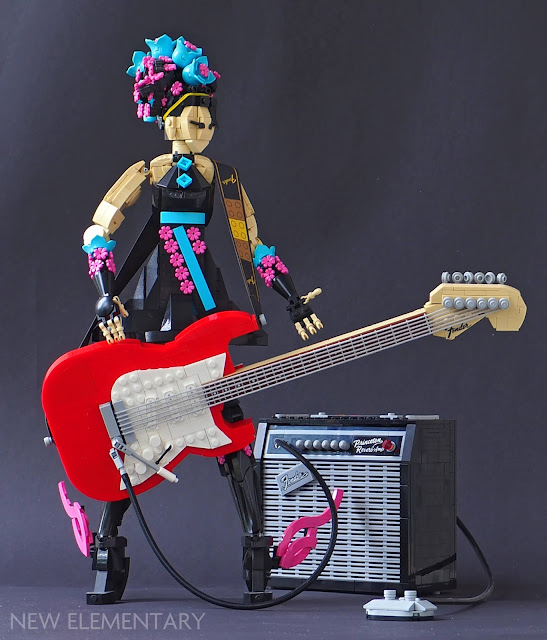 This is Zinnia Superfuzz and I built her in 2019. I planned to pick an appropriately sized figure to take photos with the guitar, but when I received the set I noticed it was way too big for my figures. Well, Zinnia was one of the bigger and sturdier ones, and felt fitting as she was designed to be a bass player.

What I found out is that the Stratocaster can hang on a figure's shoulder by its strap, but not very well. The lower button for the strap is very sturdy - Antenna 1 x 4 with Flat Top (3957b) goes all way inside the guitar - but the upper button is only a Tile Round 1 x 1 with Hollow Bar (20482) stuck into a jumper plate's hollow stud and flies of if the instrument is hung on upright position. This is clearly the biggest design flaw of the set, but I can't think of an easy and good-looking solution for it.

The original textile strap was also too long for Zinnia so I replaced it with one built with Mixel ball joints. Its connections are less realistic, but it stays together and helps the player reach the strings! So finally, in the world of buildable figures, this guitar can be played. Rock'n'roll never dies!

This series of images is not just for fun. Seeing the amplifier and the guitar along with a player made me realize that while the instrument is oversized for Zinnia, the amp looks almost perfectly scaled. I decided these objects were seriously out of scale in relation to each other until I checked Fender '65 Princeton Reverb Amp measures and realized it is a small tube amplifier, 40 cm in height and thus in good scale with the guitar (Statocaster body width is 32 cm). But with Zinnia it works as a believable large stage amp. 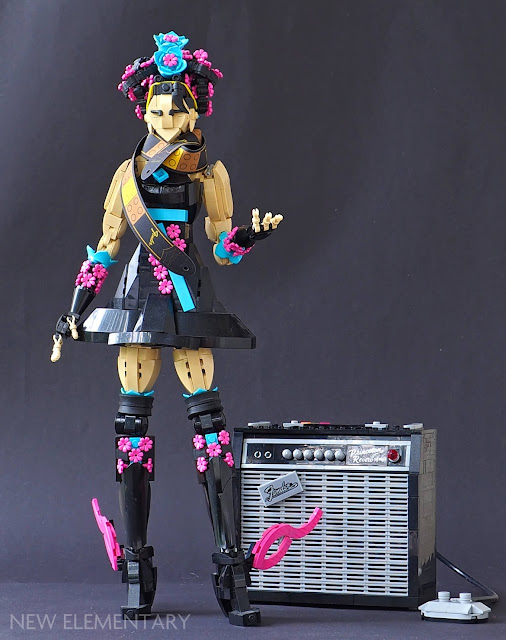 And even if the strap is too long, such a flexible piece gets other uses.

LEGO Ideas sets have usually been high-end, detailed and ambitious. 21319 Fender Statocaster continues this trend. The 1074 parts included are mostly non-specific and useful - including 78666, the brand new curved concave slope - but the more specialised ones like the silvery strings and the Fender-themed strap for example will definitely inspire MOCs in their own right. The ability to choose between a black or red stratocaster adds a bunch of extra bricks for parts fans.


The set design is mostly strong, especially on the amplifier and strings. The biggest flaw is the loose upper strap button, which doesn't hold properly if the guitar is hung too upright on the strap. There are some inaccuracies with the white area of the body and the headstock size, but these are not severe and bring an interesting challenge to those who wish to mod their set.

There has been some criticism lately with brand-based releases, most prominently with the Adidas shoe set. Some AFOLs have felt that the products are aimed less at LEGO fans and more to other kinds of hobbyists. They might be - and why not; surely the company seeks more audiences? However, I feel that Fender or Stratocaster branding is less important for this set than, for example, Adidas branding is for 10282 Adidas Originals Superstar. An anonymous LEGO Electric Guitar would have made an exciting set, as electric guitars are cool items in general; I also think it's a bit contradictory to approach rock'n'roll, which should be free and dangerous, via cemented brands. 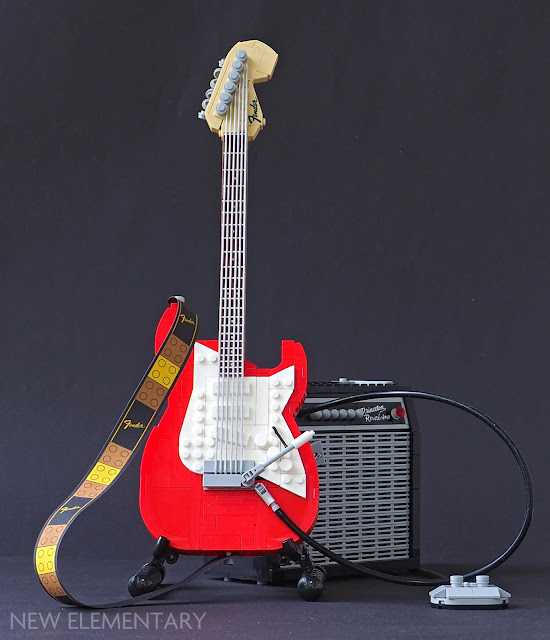 But on the other hand, Stratocaster is a legendary instrument and has definitely affected the mental image of "electric guitar" in people's heads, along with Telecaster, Gibson Les Paul, Gibson Flying V and some others - and having a set based on a certain specific instrument and design object makes it possible to compare the transition of shapes into bricks, which is interesting. And this is also a very personal standpoint. I'm sure there are some Fenderheads with Stratocaster fridge magnets and Stratocaster playlists who'll buy this set in a heartbeat exactly because it's a Stratocaster. They will be in a hog heaven! But as the set is well-designed, surprising and filled with good and interesting pieces, I can recommend it to others too. The price of 99€ (likely in Germany - Euro pricing tends to vary by country) feels alright for 1074 pieces. However, many of the special and printed pieces are likely to be unique to this set, which raises the value for builders.

I also wonder if it would have been better if there was an option to build a red Stratocaster or a black Telecaster instead of two differently coloured but otherwise identical Stratocasters? Trying to build a Telecaster using parts from this set doesn't seem impossible - anyone up to the challenge?

Posted by: Admin Posted on 9/08/2021 11:15:00 am
Email ThisBlogThis!Share to TwitterShare to FacebookShare to Pinterest
Labels: LEGO Ideas, MOC