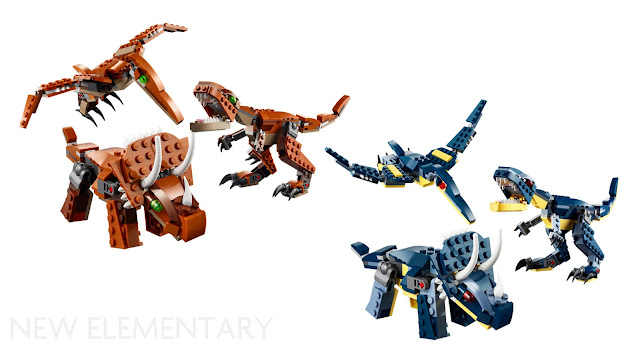 Starting today, 1 September 2021, LEGO® are running a product pilot in the UK & Ireland that sees a small number of retailers offering new variations of 3 existing LEGO sets, “so we can find out more about the colours and sizes of sets that fans of all ages want to see more of in our portfolio”. This is an exciting development in terms of recoloured elements, but also frustrating for the rest of the world!

A few days ago, Francesco Spreafico represented New Elementary in an online roundtable discussion to talk about this pilot with Lena Dixon (Vice President of Product and Marketing) and Mike Psiaki (Senior Designer), together with other Recognised Fan Media.

Released in green in 2017, will be available in blue and brown versions so 7+ builders can enjoy thrilling prehistoric adventures with a larger flock. Both have 174 pieces and are priced at £12.99: 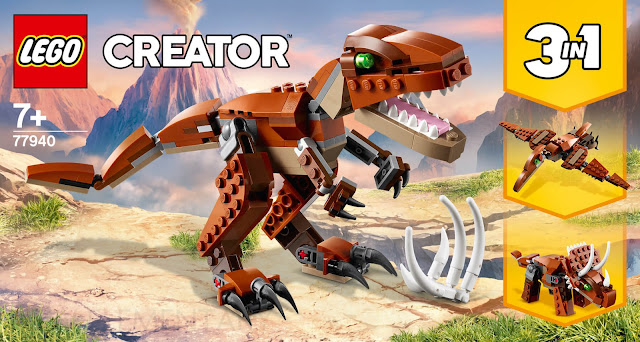 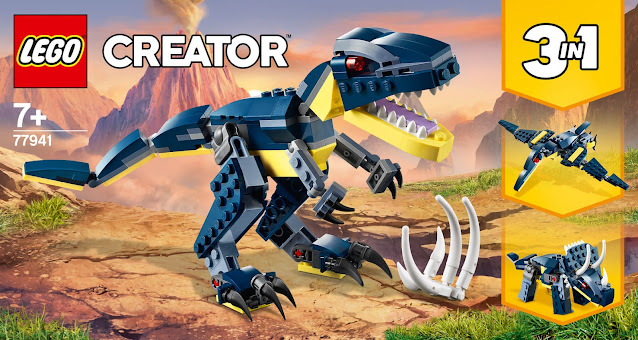 The Fiat 500 has been reimagined in light blue for 16+ builders looking to add to their celebration of iconic Italian automotive design. 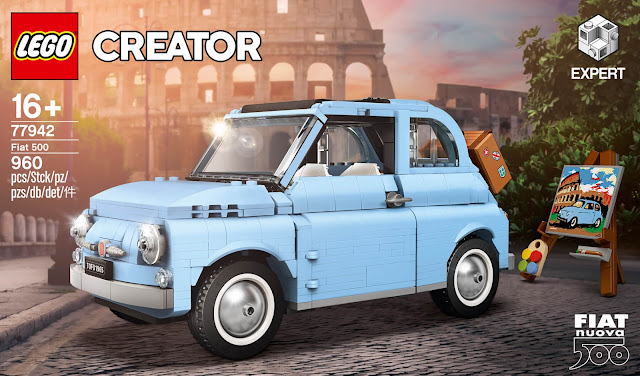 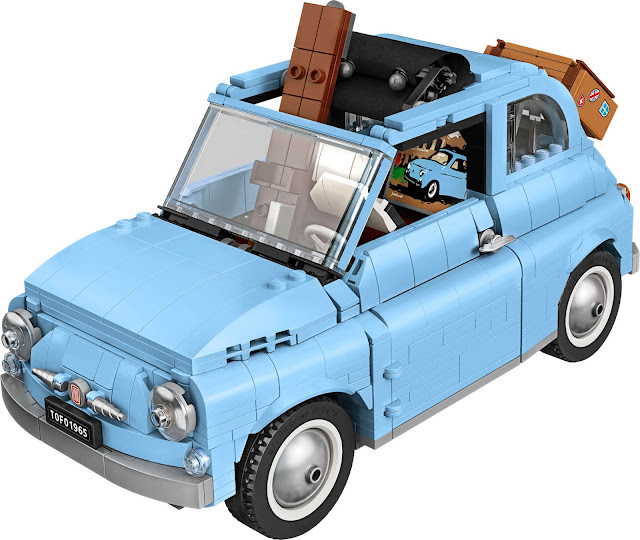 LEGO City Fire Station is being released in two new sizes so that 6+ can join in with a range of different firefighting adventures: 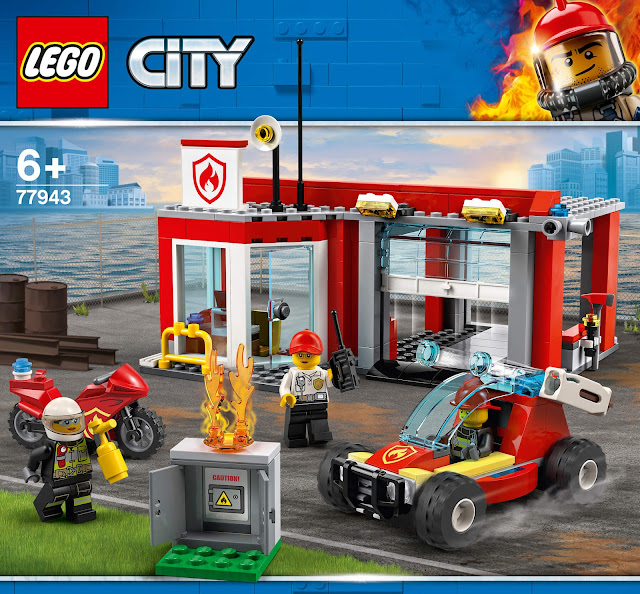 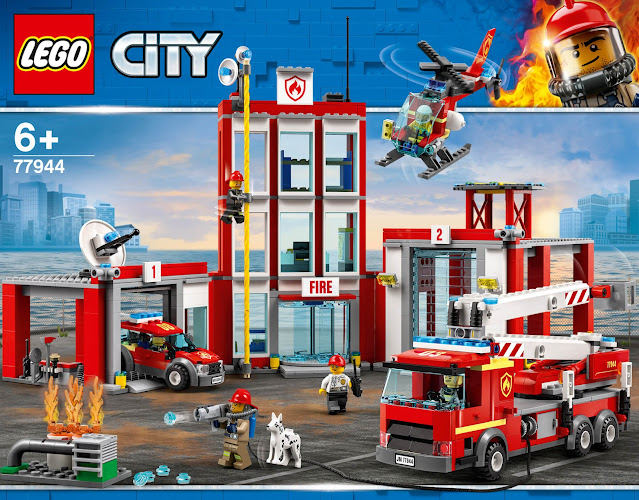 LEGO City 77944 Fire Station Headquarters is a 3-level control centre packed with cool equipment. It has 908 pieces and is priced at £89.99.

First of all: these products will not only be available at LEGO Stores and on LEGO.com but also in other selected stores, because one of the things they need to find out is where people are going to buy these sets. They want to see how these sets work when sold at the same time and at different retailers. The stores are (selected) TESCO, Smyths and on zavvi.com and iwantoneofthose.com. That last one might sell internationally, so keep an eye on it. The pilot is launched today, 1 September, and will run until the end of November.

They chose the UK because it’s a market that’s very representative and it has a great retail landscape. These sets will not be available later, even if the pilot is successful; it’s a strictly limited run.

If you’re buying from LEGO.com please consider following our affiliate links to get there; New Elementary may earn a commission.

Interview with LEGO about the new UK variations

Here’s a summary of the important or interesting points that came up during the group chat, which come mainly from questions asked by Fan Media. 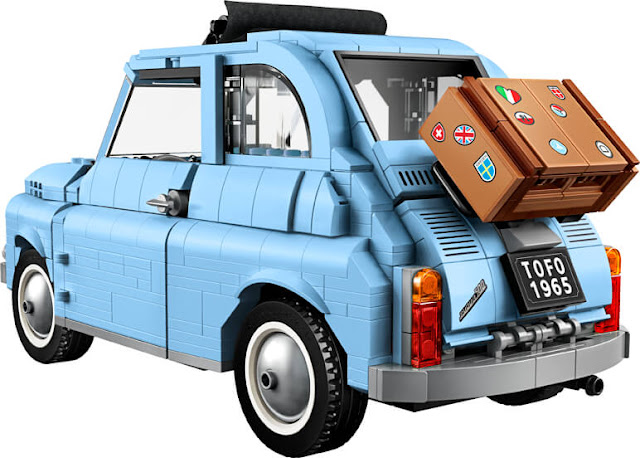 These models were chosen because they wanted to represent both kids and adults, and also because they wanted some variety (a building, a dinosaur, a vehicle). For the FIAT they asked “The Team Formerly Known As Creator Expert” whether they had something that could be part of this pilot; something where the colour change would be simple – and make sense. The FIAT was the first model the team thought of because they had actually considered a blue version when they had designed it. Only at the very end of the design process they had settled on Bright Light Yellow, so this was really a no-brainer –  they’d already talked to FIAT about it, so it was easy from an approvals point of view, and they even had one already on the shelf!

We all know about the colour inconsistencies with the Bright Light Yellow parts in the original FIAT 500... one problem was that you could see the black parts underneath the Slope Curved, 2x2 (6296487) and this problem doesn’t seem to occur with the new colour (6132420), luckily.

The Fire Station is the only set that’s not just a straight colour change. It was updated to look more like the current line; for example the fire engine has been changed to include the Bright Light Yellow stripe that’s now part of the livery on the fire vehicle sets. They didn’t make a completely new product, but still started from an existing one, because since this is a pilot, they didn’t want to use too many resources on it, and that’s why they decided to go with existing things.

An important thing to point out is that this pilot is not the answer to an existing problem, it’s just a way to try and improve what they do. Their plan, if the pilot is successful, is not to produce fewer different sets every year (by adding the colour variants), but only to see if something like this could be a good addition.

Very hypothetically (if this were successful) they could go back to older sets. For example a recoloured Café Corner was actually vaguely talked about, but in the pilot they needed something that required no design changes. Even changing something that looks trivial – like a 1x8 tile being replaced by two 1x4 tiles – would mean starting over all the standard review processing from the beginning, and revising packing stations in the factories, and so on. With the Café Corner there are parts that don’t exist anymore (like the door), and it had no interior… so, should they add some? It’s an interesting concept, so maybe in the future, but most definitely not now.

Although originally designed by Mike, the dinosaur was recoloured by Morten Rauff, who came up with the crazy colour combination of Bright Light Yellow, Dark Blue and Sand Blue! Mike claims he is “a lot more boring” and more realistic… so we won’t be seeing a pink Saturn V any time soon (as suggested by Andres from Zusammengebaut).

Now let’s get to the questions New Elementary asked.

Even though this is a marketing test, we all know that most AFOLs will probably see these as regional exclusives (something that TLG agreed to cease doing a few years ago after AFOL backlash about issues such as scalpers). We asked if they’re aware of the certain backlash from the rest of the world, and if the results of this test will be reliable – given many people buy the sets only to resell them abroad.

They answered that they hope to reduce the problem by putting a limit on how many sets can be bought (one for the FIAT, three for the other sets). And they know about the backlash, that’s why they’re having these conversations. But they really need to make pilots like these to understand whether ideas work or not. They’re very sorry, but they hope that we all will benefit from their learnings, in the end.

We also asked if they’d considered putting the new recoloured parts on Bricks & Pieces and Pick-a-Brick walls, to make it easier to replicate the sets for people who won’t get it, but no; the parts won’t be there. But they will probably reappear in other sets in the future, as generally happens with most parts.

Given how unpredictable and uncertain parts availability on Bricks & Pieces is, we really hope these rare elements might appear there after all!  [UPDATE 7/9: It's not looking good! One of our team just had various phone calls with LEGO Customer Services trying to order the bricks from the Fiat, but no joy. "A limited test run, so no distribution of the exclusive pieces on B&P."]

Recoloured parts in the new LEGO dinosaurs and blue FIAT 500

Frustrating as it is that these may end up being rare, expensive parts on the secondary market, the New Elementary team can’t help being excited about the colour-changed elements in these new sets. Here are some we spotted, let us know if you see any more!

Thanks to a quick Rebrickable scrape by TobyMac, we can confirm the  FIAT features these Light Royal Blue/ Bright Light Blue parts; 'Color Error' indicates a new recolour. Click/tap to enlarge. 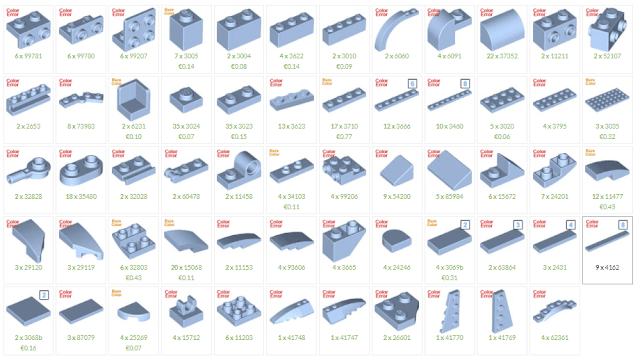 The Dinosaurs and Fire Stations

As for the other sets, here are the brand new recolours we reckon we spot:

As for rare parts in those sets, here’s some we spotted:

Posted by: Admin Posted on 9/01/2021 12:01:00 am
Email ThisBlogThis!Share to TwitterShare to FacebookShare to Pinterest
Labels: City, creator, Creator Expert