Since its debut a year ago, the LEGO® Super Mario theme has consistently offered up a plentiful supply of exciting new elements, including new moulds, recolours, and decorations. To celebrate the newly-unveiled third wave of sets in the theme, we here at New Elementary will be taking an exclusive look at all the new elements arriving this August. Today, we’ll begin by looking at several new moulds which appear across the upcoming wave. 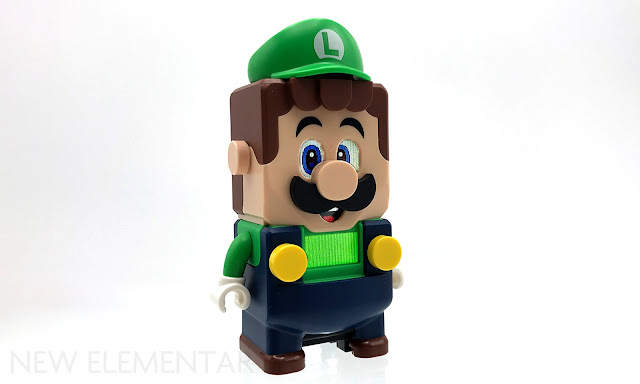 A year after the introduction of his brother Mario in brick form, Luigi has received his own LEGO makeover, introducing several new elements in the process.

The most notable of these new elements is that for Luigi himself, which appears in 71387 Adventurers with Luigi Starter Course. Although it may initially appear nearly identical to LEGO Mario, when placed together it becomes apparent that the LEGO Luigi mould features several differences. 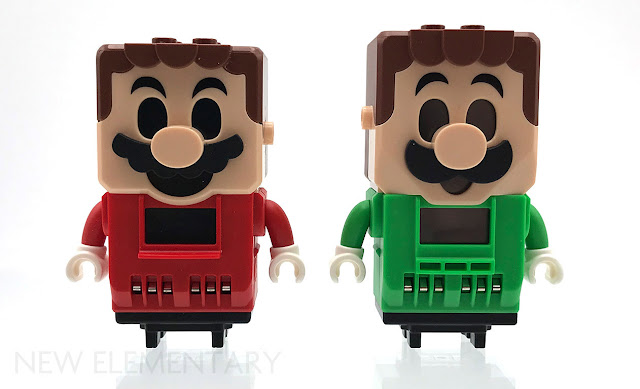 In contrast to the Mario Hub (Design ID 49242 | Element ID 6286809), the Luigi Hub (77127 | 6351935) features a more gaunt face, different mustache, slightly closer eyes, and hair that is one plate taller than Mario. In a recent informal Q&A with the designers that New Elementary participated in, they emphasized the importance of making sure that the characters retained the subtleties of their iconic appearances, while still playing identically.

Three new trouser elements have been introduced for Mario and Luigi to wear. They include:

The first of elements notably features much slimmer legs than the others, so as to emphasize Luigi’s more lanky stature. The other two elements retain the more stout proportions of the original Mario pants.

Corresponding with the pants, three new hats have also been introduced:

Although it may appear fairly mundane on its surface, the prize for most exciting new mould undoubtedly goes to the Tile 3 x 3 Curved, Macaroni (79393).

This newest addition to the macaroni tile family helps to finally bridge the gap that has existed between the Tile 2 x 2, Macaroni (27925) and Tile 4 x 4, Macaroni (27507) since they were introduced in 2017. Furthermore, it marks the latest in recent trend of 3 x 3 rounded elements such as the Window Round 3 x 3 x 2 (73878) introduced earlier this year. Will it only be a matter of time before we see a matching plate and brick?

Initially, the element is only available in Olive Green (6362965) in 71390 Reznor Knockdown, but with luck will quickly appear in additional colours.

The first wave of LEGO Super Mario sets saw the introduction of two different kinds of feet elements to help with creature building. This third wave now sees a third in the form of Feet 2 x 3 x 2/3  with 4 Studs on Top (79750). 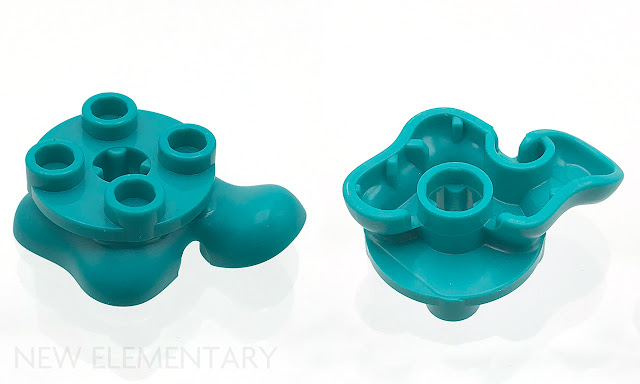 This element is intended as an alternative to Feet 2 x 2 x 2/3 with 4 Studs on Top (66858), which was used heavily during the first year of the theme. On the new element, one of the feet is outstretched, appearing mid-step. Unfortunately, the cavity beneath the outstretched foot is slightly too large to serve as an anti-stud.

The last of the new elements introduced in the Summer 2021 LEGO Super Mario sets is a new addition to the “Mario Plate” system, in the form of Plate Round Corners 4 x 4 x 2/3 Circle with Reduced Knobs and 2 x 2 Hole (79387).

Stay tuned to New Elementary for more LEGO Super Mario elements; next time we look at the newly recoloured parts!