10276 Colosseum is the largest LEGO® set to date, and here is our colossal review! Our guest author is historian and LEGO enthusiast Kevin J. Walter who founded the site Public BRICKstory to combine his two passions, and even built a LEGO Colosseum that hit 10k supporters on LEGO Ideas last month! Available priced 499.99€/ £449.99/ US$549.99/ CA$649.99/ AU$749.99. Buying this set? Consider using our affiliate links: UK LEGO Shop | USA LEGO Shop | Australia LEGO Shop, for other countries 'Change Region'. New Elementary may get a commission. The products in this article were provided free by LEGO; the author's opinions are not biased by this.

“Hail, Emperor, those who are about to die salute you!” – Suetonius, Vita divi Claudii 21,6 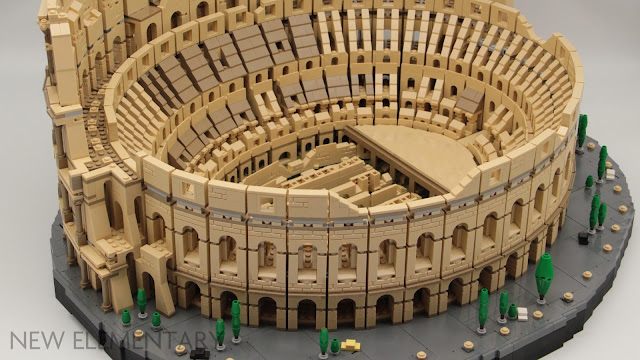 What football provides in modern-day Europe, American Football in the US or cricket in India, was provided in the ancient Roman Empire by ludi – the entertainment of the people with various kinds of games, most of all the bloody gladiatorial fights. All of these sports have one thing in common: they were, and still are, hosted in massive stadiums and arenas.

With the latest Creator Expert model, 10276 Colosseum, LEGO® has finally revealed the archetype of every modern sports stadium, one of the “New7Wonders of the World” and the biggest tourist attraction in Rome. With 9036 (!) parts, LEGO is releasing its biggest set to date and the inventory isn’t the only huge aspect; the measurements of 52x59x27 cm (20.5x23.5x10.5 inches) quite literally earn this set the epithet “colossal”!

In this imperial game, the first “leg godt” ever held, I will entertain you across three acts of excitement: The Parts and The Build today, and our third act will be revealed when this set is released on 27 November 2020. So to all spectators: lose no more time, seek out your ranks, take a seat and enjoy the games!

As in every good game, we first present you with its parts. In all honesty, I did not expect many new parts in this model as its appearance is, by its architectural characteristics, repetitive and the colour scheme is rather limited (Brick Yellow/ Tan and Sand Yellow/ Dark Tan), due to its modern conservation status.

There are no new moulds in this set, but this is not much of a surprise given the fact LEGO already has a huge variety of different parts that are well-suited for architectural designs. Compared with the recently released 75318 The Child and 21324 123 Sesame Street, both of which provide a large quantity of recolours, stickers, printed parts and new moulds, the Colosseum provides a limited amount of ‘new elementary’.

Only five parts make their debut in a new colour: 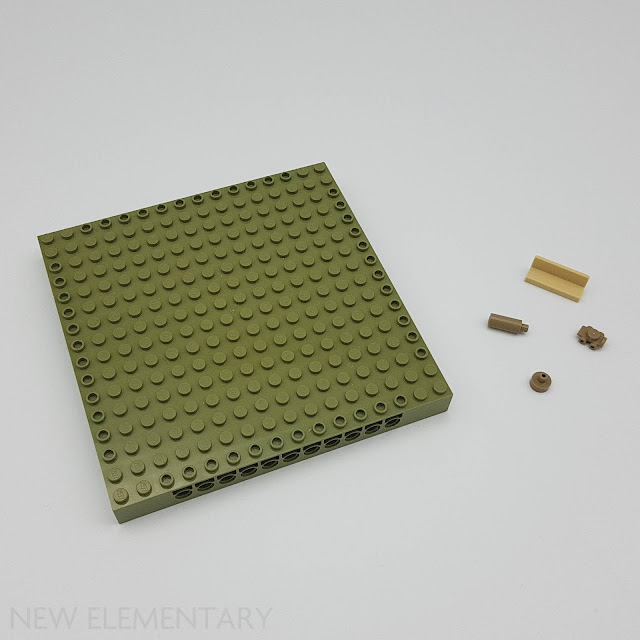 Here I must anticipate one of my personal highlights of this set by showing you the last three in situ, as they simply look great as columns. 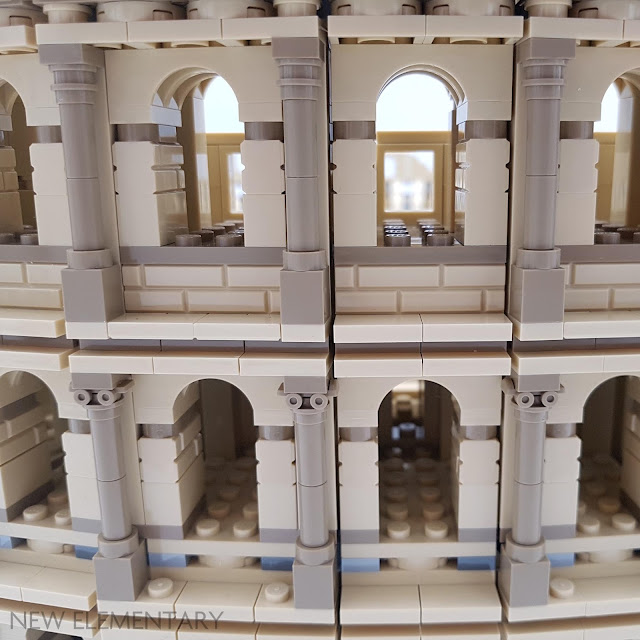 The use of the Roller Skate part for the Ionic capitals on the second story of the arcades on the outside wall is simply perfect.

The variety of different parts is not as wide as you might expect. While the inventory at the end of the instruction manuals of other sets are often several pages long, the Colosseum’s covers just two pages. In consequence, many of the parts come in high quantities. The basic parts alone – bricks and plates in different forms, mostly in Tan and Dark Tan – amount to around 2500 parts. But there are also large quantities of several other interesting parts: 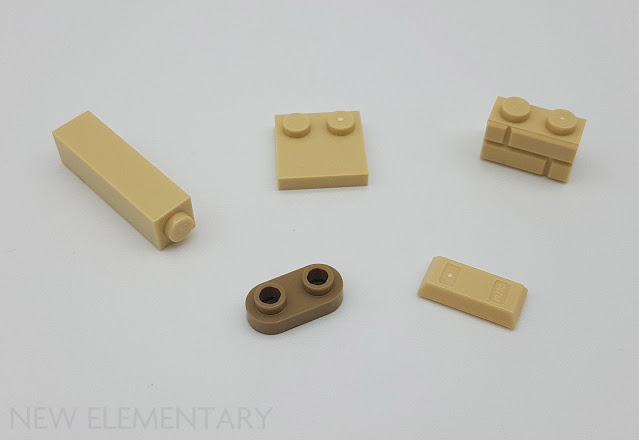 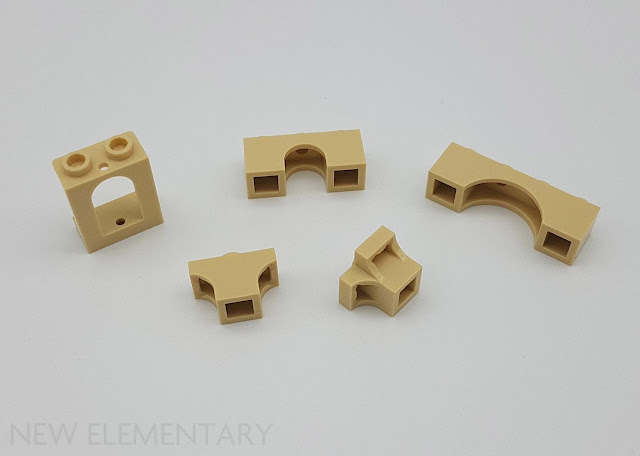 As is evident, the Colosseum basically consists of many different arches, which comes as no surprise. I will elaborate on this point in the next section of the review.

There are also several parts of note which already exist in other sets in very low quantities: 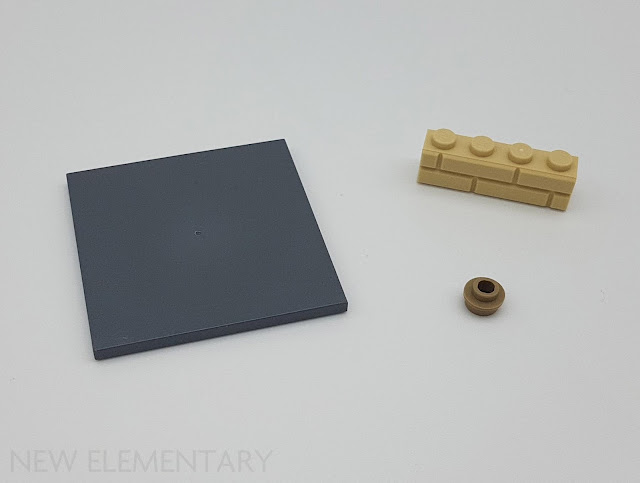 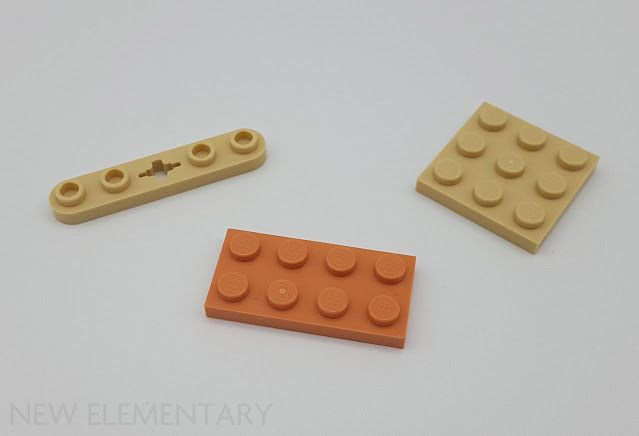 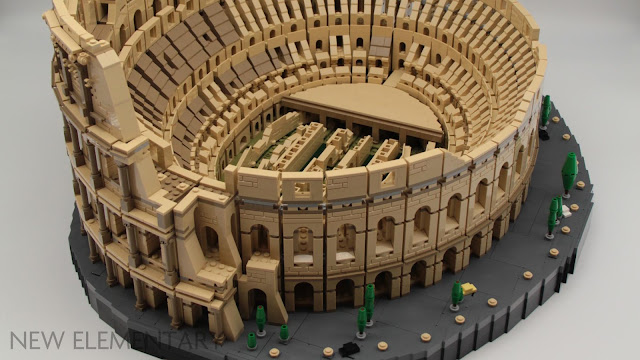 To conclude this act: while there are no new moulds, there is indeed no need for them as there is no aspect of the Colosseum that requires one. The recolours can be counted on one hand, but the Dark Tan parts especially will be of great interest for future use. Considering the many other parts that come in high quantities, this year is a good one for fans of Tan and Dark Tan. With the Mos Eisley Cantina, The Child and now the Colosseum, it seems LEGO have released more parts in these colours than in any of the recent years.

Like other recently released sets, the Colosseum falls under the 18+ age mark and so the box follows the now-typical adult branding and displays some nice angles of the model, nothing spectacular though, so I shall skip to the content.

There are 4 cartons inside the box, as is the case with the Star Wars UCS models, but they are not really that interesting or special in their design. The biggest difference to a UCS set is that the instructions come in 4 booklets, one per carton. One problem regarding the booklets is that they are too small for the content. Several times during the building process I was unable to identify the parts I needed (in the parts preview box) or where to place them because, after just a few pages, parts of the step disappear into the central fold and are difficult to make out. 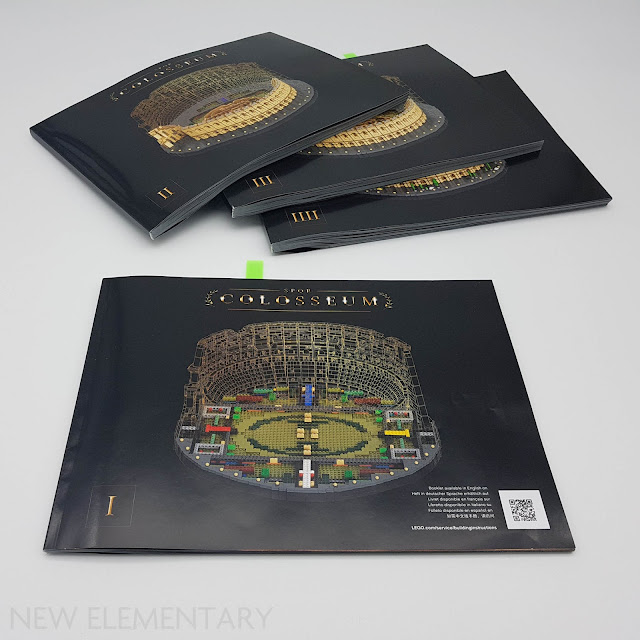 With a combined total of 836 pages of instructions, a ring binder would have significantly improved the building process, as was provided with the UCS Star Destroyer. I can only speculate that the production costs were too high for this model. 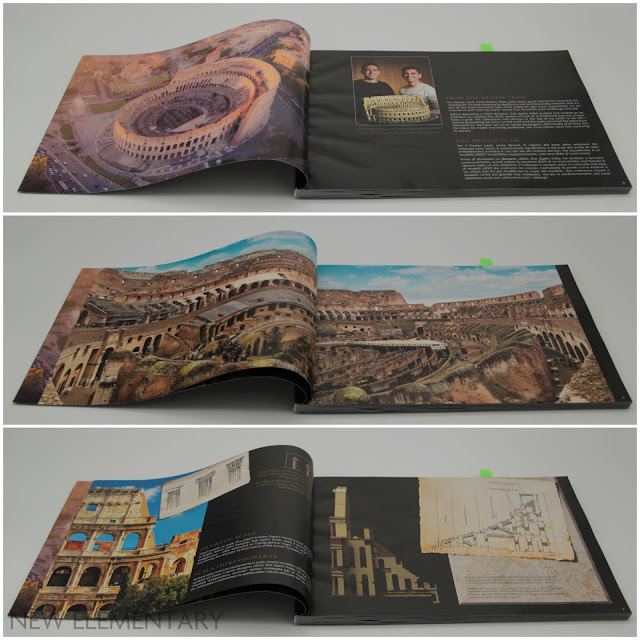 A positive aspect is that each booklet has some introductory pages on the history of the Colosseum. I will take a closer look at these aspects in my third part about the historical dimension to this build. 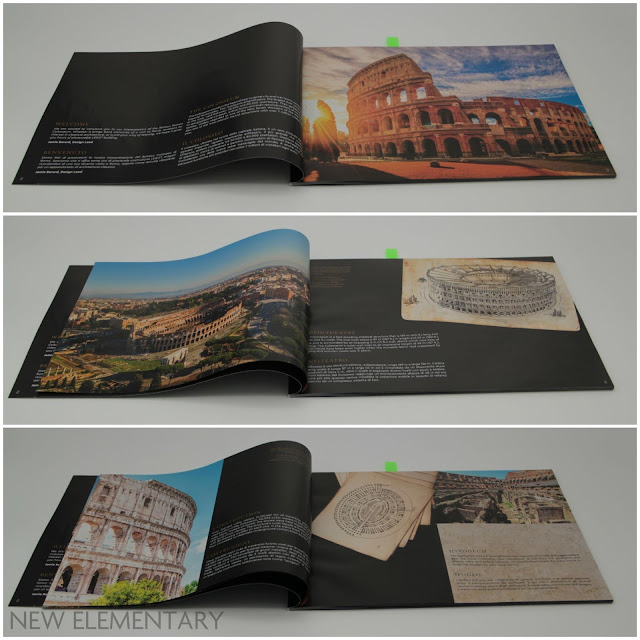 The set contains 40 numbered bags for the various stages and a staggering total of 124 plastic bags - I did count them. Why, you may ask? Given The LEGO Group’s recent announcement to switch from plastic to paper bags for greater sustainability, I wondered whether there would have been an opportunity to introduce it before the release of the Colosseum. Sadly, the largest LEGO model to date seemingly also contains the largest quantity of plastic waste; I filled an entire 75 litre trash-bag. It is my hope that future production runs of the set will have paper bags – the brownish paper would even fit well from an aesthetic point of view.

Alright, let us now dive deep into the remains of Rome’s glory!
Click here to continue to part 2.

10276 LEGO® Colosseum will be available via LEGO.com and LEGO Stores from 'Black Friday', 27 November 2020 priced 499.99€/ £449.99/ US$549.99/ CA$649.99/ AU$749.99. LEGO VIP members who purchase the Colosseum during Black Friday/Cyber Monday weekend receive this limited-edition Roman Chariot set – participating countries only, and at time of writing we were not told which countries these are, so do check when the time comes!

One week earlier - 21 and 22 November - is LEGO VIP week including double VIP points, a Charles Dickens tribute gift-with-purchase and this awesome giant teal brick! Again we are not certain but it seems some of these GWPs will remain available for Black Friday/Cyber Monday weekend too. Consider using our affiliate links – New Elementary may get a commission – click the teal bricks below!