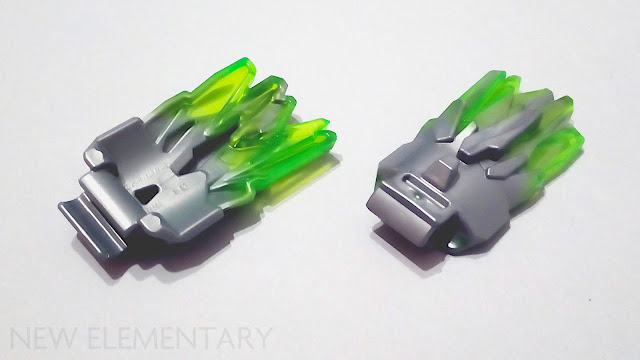 One such part is Function Element W Hinge, aka Energy Burst with Wide Clip (Design ID 66960) appearing in three dual-moulded colour variants throughout this year’s Ninjago Spinjitzu Burst sets. I was sent 5 copies of 70687 Spinjitzu Burst - Lloyd, each including 4 of them in Silver Metallic with Transparent Bright Green (Element ID 6322846), giving me 20 of these to mess around with! 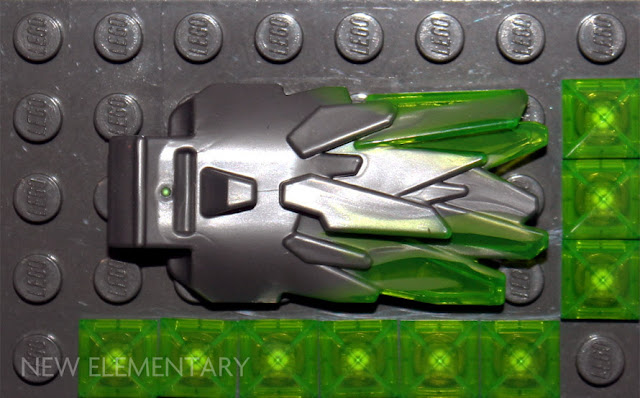 The crystal panel (as I’ve decided to call it) is 3 modules by 5.75-ish modules - we’ve barely begun and there’s already weirdness going on. It is a dual-molded panel with a crystalline texture and a clip connection on the bottom, which is the only official connection point on the piece. Unfortunately, the clip has a lip hanging over to limit motion and no friction, both of which serve to facilitate the set’s play feature. In my experience this play feature doesn’t actually work (Inthert had better luck with it, though) which led me to feel the part’s functionality was compromised pointlessly. 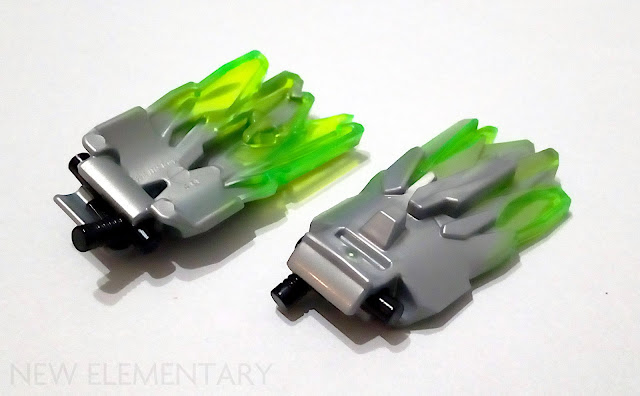 Solving the lack of friction was the first thing I attempted, and after fiddling a bit with various bar pieces I discovered that Nozzle W Ø3 18 Shaft (60849) sort of locks in place due to friction generated by the little grooves in its handle. 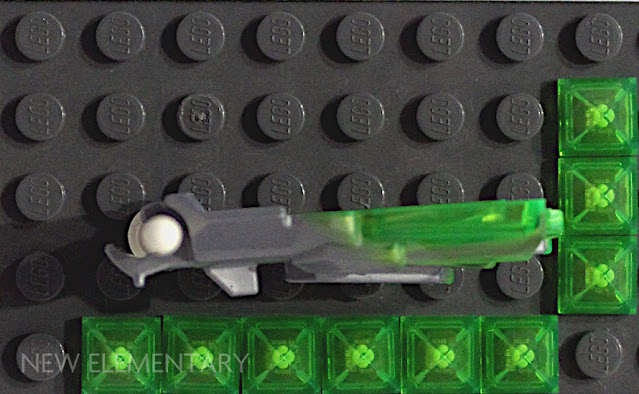 Examining the part from the side, we can see that we get the strange 5.75 module height because of the aforementioned lip. If the part would end at the clip, we’d have the slightly more conventional dimensions of 3 x 5.5.

The panel portion of the crystal panel is two plates tall while the clip at the bottom increases this to another odd size - it’s more than 2.5, but not quite 3. The panel is slightly arched, but the empty space inside doesn’t quite fit a plate. With all of these out-of-system dimensions, one would think this is a Bionicle part - which is exactly what I thought, too! 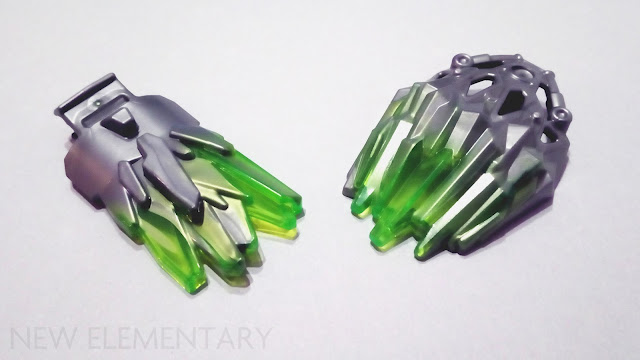 More specifically, I immediately made note of the similarities between this and Shell W Double Ø 3 2 Shaft No 10 (24166) released in 2016 exclusively in Bionicle sets. Colloquially referred to as “Uniter armour”, since the Toa of that wave were called Uniters, these too were dual-molded with one transparent colour and a metallic colour. In fact, the 3 existing colour schemes for the crystal panel match 3 versions of Uniter armour. I had some in the same combination of Silver Metallic with Transparent Bright Green (6135119 | 24166), so my first instinct was to use these in a Bionicle MOC.

But first, tablescraps! During my experimentation with bar pieces to solve the lack of friction, I noticed that it is possible to add four of these crystal panels to Assembly Element Ø3.2 (2566) and the protruding lip will lock them in place. 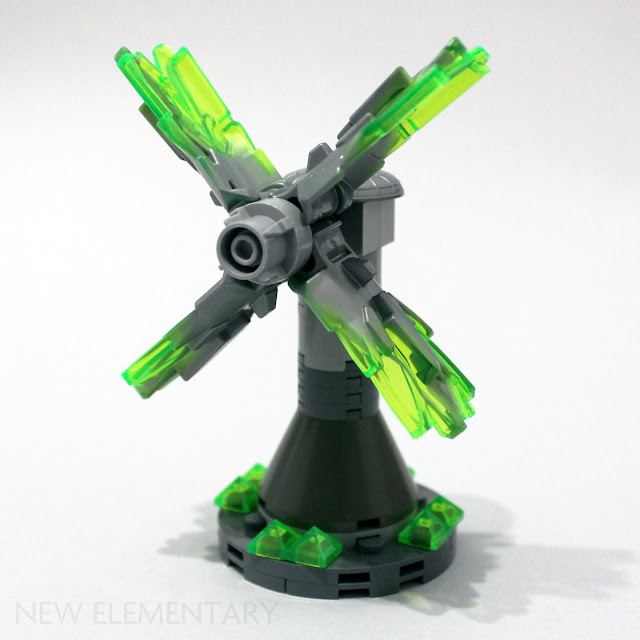 I used the resulting construction on a small windmill, topped off with the silver minifig hat from the same set. The simple design and addition of the transparent bright green pyramid tiles aims to be reminiscent of a smaller building sprite from old real-time strategy games. Maybe these would be some sort of resource gathering buildings, and the green bits would change colour depending on what team you’re on. 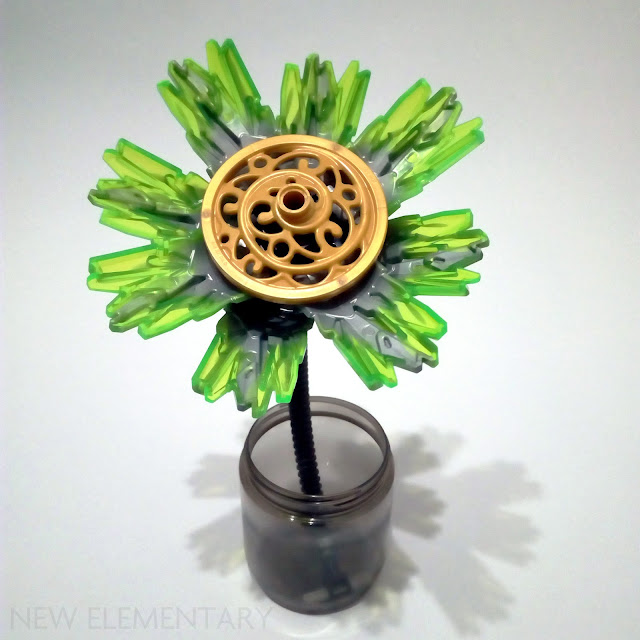 Next up is a flower, using crystal panels as petals. Here I managed to use the hub part despite the annoying protrusion intended to secure minifig legs. I stacked two on top of each other using a stud putting them at a slight offset, and the golden dish was placed on a jumper plate which too was connected to the hub with a stud. Metallic and transparent colours aren’t quite common on plants in real life, but since I already noted the textural similarity to a Bionicle piece I’m just handwaving this as a Bionicle flower. 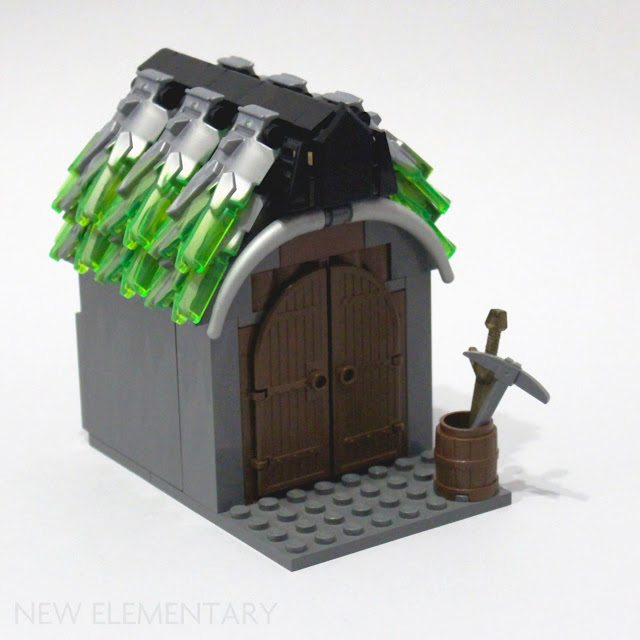 When we were discussing these parts, Inthert mentioned the old adage that every part is a roof part, so I decided to put that to the test with this rather simple little house. I’m certain that castle builders could easily breathe more life into the concept, and would imagine the piece appearing as the roof on some sort of wizard’s hut due to the unusual colours. 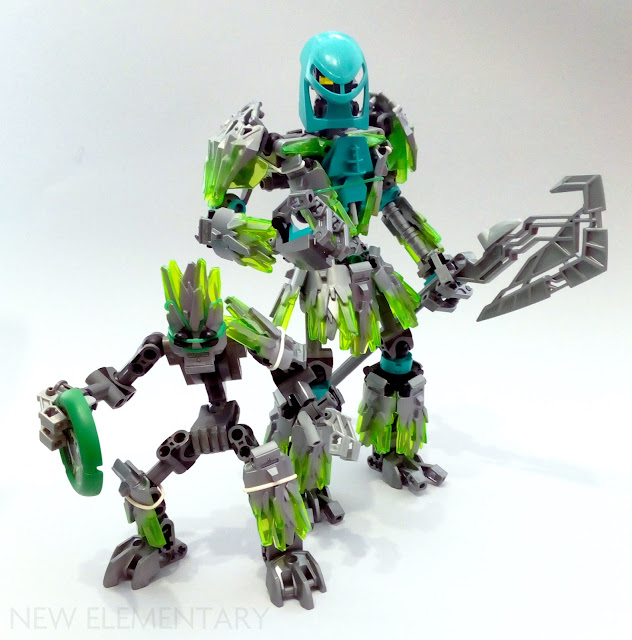 Stepping onto home turf I finally put these parts to use alongside their 6135119 cousins on a reimagining of Toa Lewa. I used the very first incarnation of the character from 2001 as a loose jumping off point, sticking to the original mask and basing his weapon off of an axe. My main inspiration here was the traditional tribal clothing seen in cultures living in warmer climates. 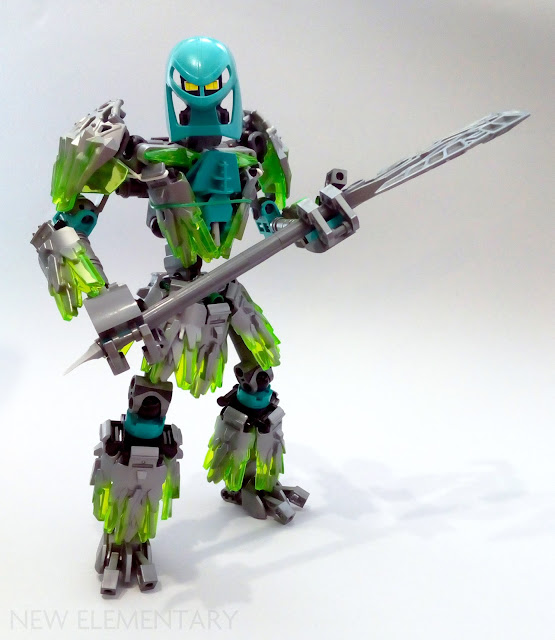 The first thing I built were the legs. Putting the panels onto the hub as intended and simply turning it upside down gave a strong resemblance to the grass and hair leg-wear seen on the shins of tribal warriors. Working my way up, threading the panels onto a dark green String 21M W Shaft Dia 3 2 W 2 Knob (6195813 | 14210) resulted in a convincing skirt. The lack of friction gave me less grief here than I thought it would. I eventually only made use of the friction solution with the nozzle pieces on his arms, while cut flex tube and some rubber bands enabled the unusual angles in the torso. I chose bright bluish green as an accent colour. 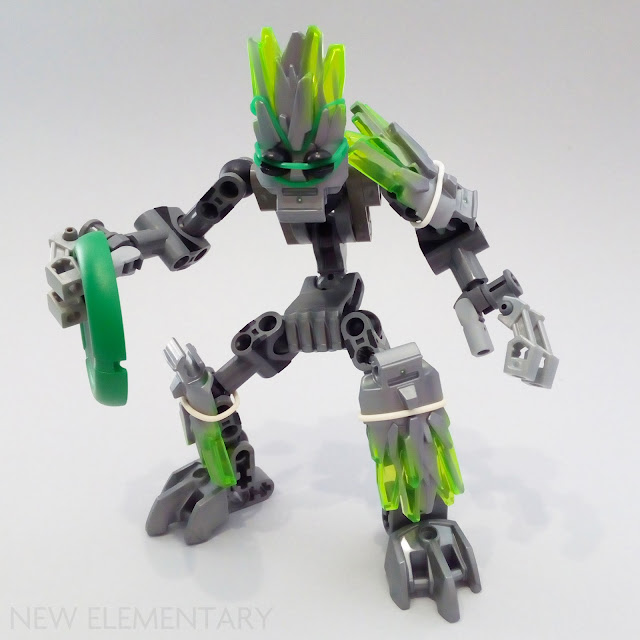 Inthert had the exceptionally inspired idea to use these crystal panels as tribal masks, adorned with various spikes, tooth pieces and lever bases affixed with rubber bands as eyes. Considering the thematic roots of Bionicle I knew I had to make use of this idea, but the panel wasn’t quite large enough for Lewa’s mask - so I made a Matoran too. Here the aesthetic diverged from the original even more, but this reimagining of Kongu fits Lewa well, and a dark green Large Figure Throwing Disc, Kanoka (32533) loaned from 8505 Amazon completed the likeness.

Ultimately the crystal panel feels like one of those parts that the building community is going to mostly gloss over aside from a few builders, some of whom may be going out of their way to use it for NPU bonus points. If the clip had friction and the dimensions were less unorthodox, builders would be more likely to use it. That said, the odd dimensions and bold texturing makes it feel right at home among Constraction pieces, and I’m confident it will get some good mileage in character and creature MOCs in the coming years.

Get your Spinjitzu or indeed anything from LEGO® Shop at Home this weekend, 21 & 22 November 2020, to enjoy VIP benefits and gifts with purchase! New Elementary may earn a commission if you use our affiliate links. LEGO.com USA

READ MORE: We reveal which recent sets contain the most new elements


All text and images are © New Elementary unless otherwise attributed.
Posted by: Admin Posted on 11/21/2020 10:27:00 am
Email ThisBlogThis!Share to TwitterShare to FacebookShare to Pinterest
Labels: CCBS, MOC, Ninjago