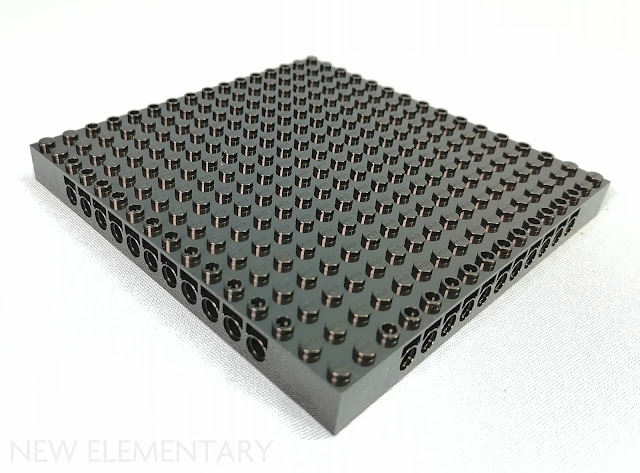 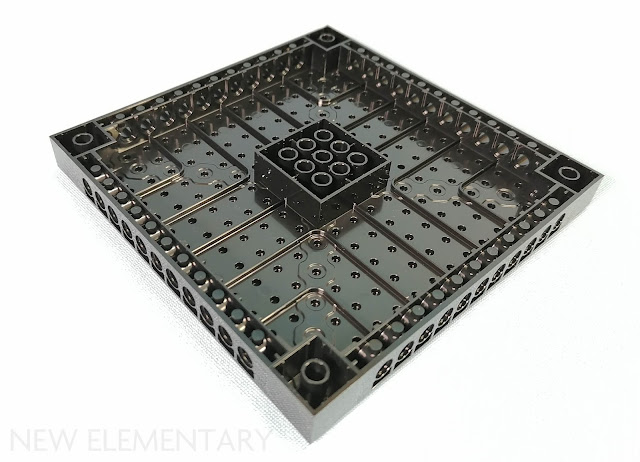 Next is the new Brick Separator 4 Studs Wide in Black (6302093 | 55819). Since there are multiple models to be built, using a lot of 1 x 1 tiles or plates, it is only logical LEGO would introduce a big brother for the standard brick separator. While this is not a bad idea, I do have some issues with the tool itself.

When the 1 x 1 round plates are placed on the edge of a plate, there is no problem getting them off. But when the parts are in the middle of the plate, the separator has trouble getting a good grip on the plates. This is partly because of the round plates themselves, as they don’t have a side wall going all the way down. This gives a smaller surface for the separator to leverage the part with. This seems to be confirmed by the fact that a normal plate can be removed without any problem. I also tested this with the older, 2-module wide version which had no trouble removing the parts. Maybe this is because the studs of the parts being removed are gripped on 3 sides, whereas on the larger version the 2 central studs are only gripped at the front and back? The fact that  the 4-module version has no problem removing just one round plate seems to back that theory up. Luckily, the smaller side-wall of a round plate means you can use the 6-module wide end of the separator intended for tiles. A warning though: if you don’t remove the parts in a controlled manner, they tend to fly all across the room! 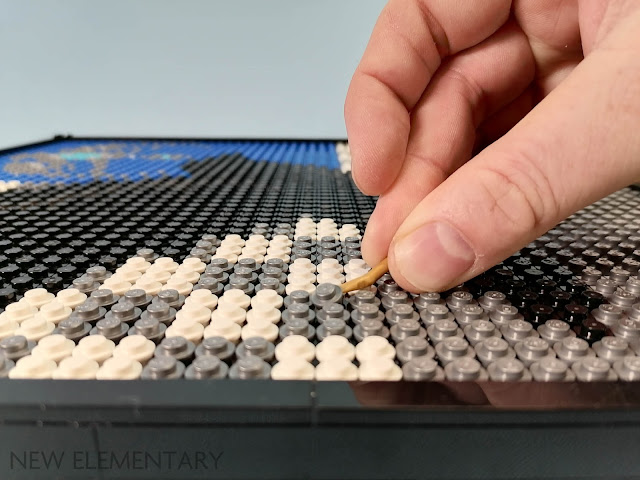 Note also that the set also comes with a Tool Crowbar in Warm Gold/ Pearl Gold (6056774 | 92585) to remove parts that are surrounded by other parts.

The last new mould is the Technic Panel 3 x 5 with Wall Mount Hole, coming in Black (6302094 | 67139). This part is placed in the back of the mosaic as a wall mount, but I can see this part being used outside of its intended purpose very easily. 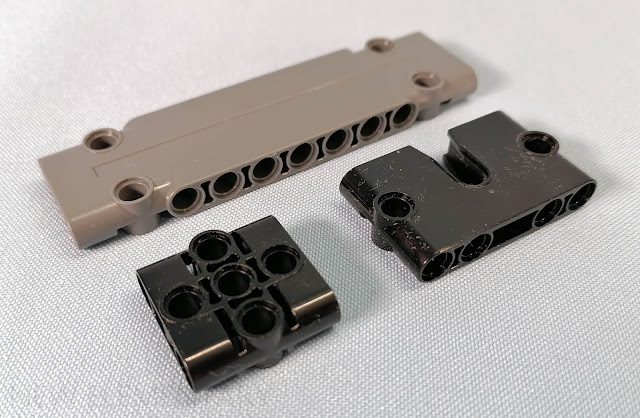 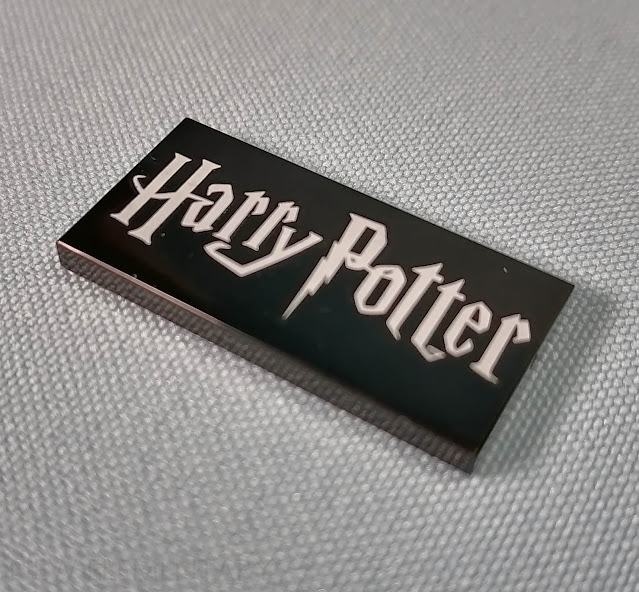 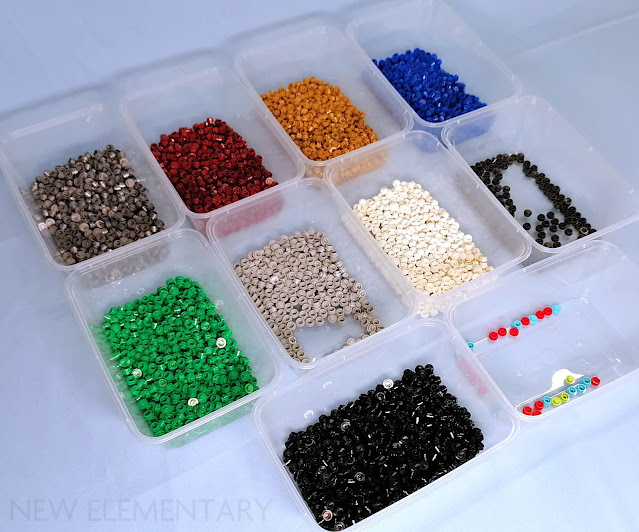 There are no new recolours or rare parts in this set, unlike the earlier LEGO Art sets which introduced many new colours of the round plate. What is noteworthy is the piece count: 4249 in total, whereas the earlier sets averaged 3212 pieces each. This is because of the vast amount of round plates you get with this set. Because each crest uses its own House colours, there are a lot of parts that only get used in 1 model. In total, excluding the spares, there are 3503 round plates in 12 different colours.

So: 9 bases, each comprising 16 x 16 = 256 studs, gives us a total of 2304 plates to be added. I must be honest, I was sceptical as to how much fun this was going to be. I chose to build the Ravenclaw crest first. Gryffindor (the house of Harry Potter) was too obvious to start with; Slytherin is not my type; and Hufflepuffs are described as patient. Ravenclaw, the house that uses wit rather than do hard work, is more up my alley. Also, I like blue. 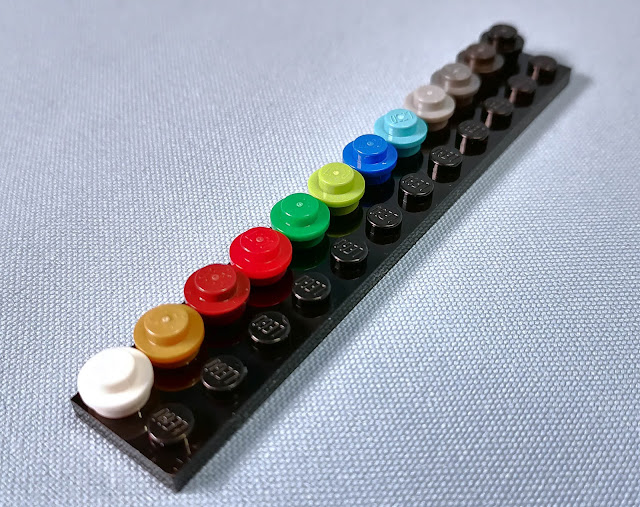 At the front of the instructions is a handy tip: there are some extra plates to create a colour chart. Each building page shows this chart, with numbers to find the correct colour more easily. 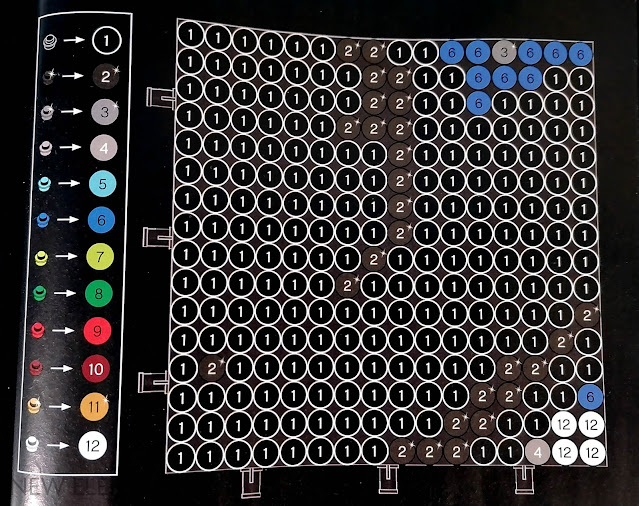 Since it is tricky to spot some colours on paper, especially the Pearl colours, this ‘real life’ tool is great for anyone who has trouble seeing the subtle shade differences.

LEGO also provides a soundtrack to enhance the build experience. Unfortunately, the soundtrack for this set was not available yet, so I just put on a Nightwish CD.

The build is straightforward. First, we build the 9 sections. I was surprised by the speed this happens at; each section takes about 8 to12 minutes, going at a steady pace. When all sections are done, they get connected to each other with standard Technic Pins. A border is added, adding a lot of strength to the model. 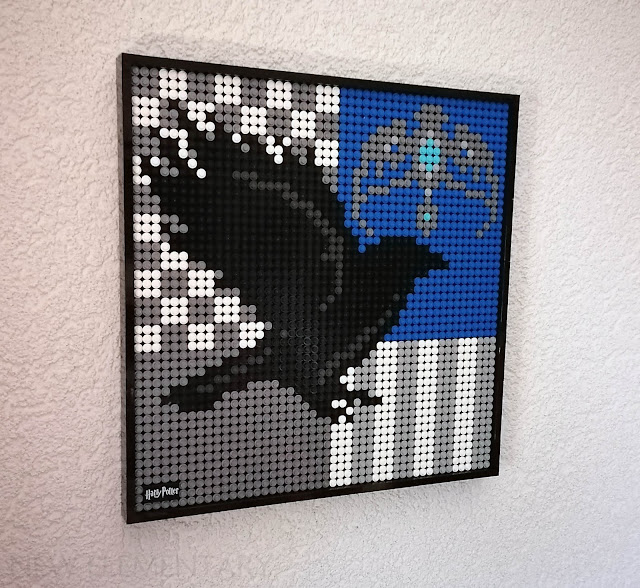 After about 2.5 hours, including taking photos and taking my kid back to bed, the mosaic was finished. 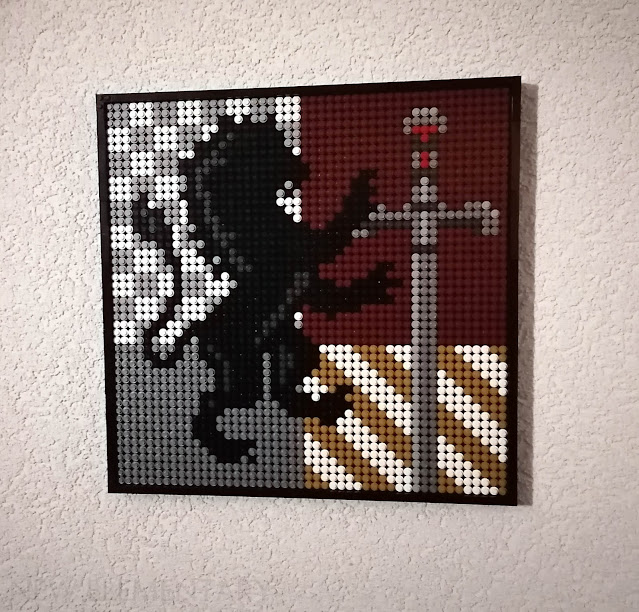 I had time to build a second crest. This time I chose Gryffindor, as that is one I will probably not display, so I don’t need to rebuild it later on.

Well, my mind has been changed. The end result looks much better than I expected from the photos; nothing beats seeing a model in real life.

The build process itself was also more fun than the idea of ‘just add 2304 plates’ that I expected. There is some kind of peace in not having to think very hard, but instead just adding parts. It’s like a Mindfulness exercise. The pressure of having only 1 day to do this review diminished the joy a bit however, but when I build the remaining models (and I will!), that pressure will be gone.

Proud Harry Potter fans will love displaying this on their walls but if you’re not into the subject matter, this set only offers you a few new moulds… but plenty of round plates, the best price-per-piece of any LEGO Art set to date! Given there are no new colours here though, one of the other sets might be of more value to your parts collection.