Switch My Lantern Up: The winners

It is finally time to reveal which five LEGO® creations from our contest, Switch My Lantern Up, will be receiving the prizes of LEGO® Fiat 500s! We were going to announce them yesterday but it has been such a tough one to judge, and there were 88 models submitted using the Super Heroes lantern (part 65581). 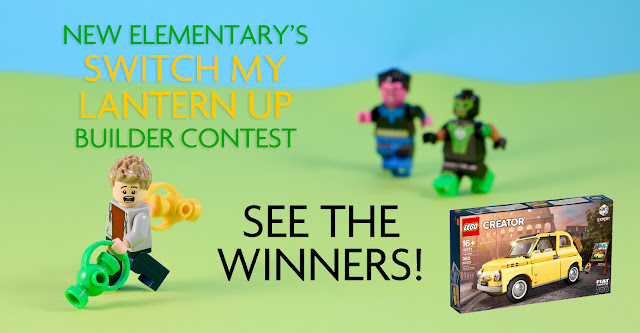 This time the judges were Victor Pruvost and Tim Johnson from New Elementary, and none other than the LEGO Senior Designer who actually designed the lantern piece, Esa Nousiainen! We were honoured to have him and he was really impressed with what he saw:


"What a nice selection of submissions! From the tiniest little innovations to HUGE builds. It was really nice to see all the different ways people use the building functions of the element, and equally exciting to notice how people see the element can represent so many different things."


So thank you all, each and every one of you, and I trust you had lots of fun along the way. The three judges were asked to assess the builds primarily on "Nice Part Usage" – specifically, how cleverly the seed part was used. Overall technique and presentation also factored in the choices but counted for less than the NPU factor.

In no particular order our five equal prize winners are: 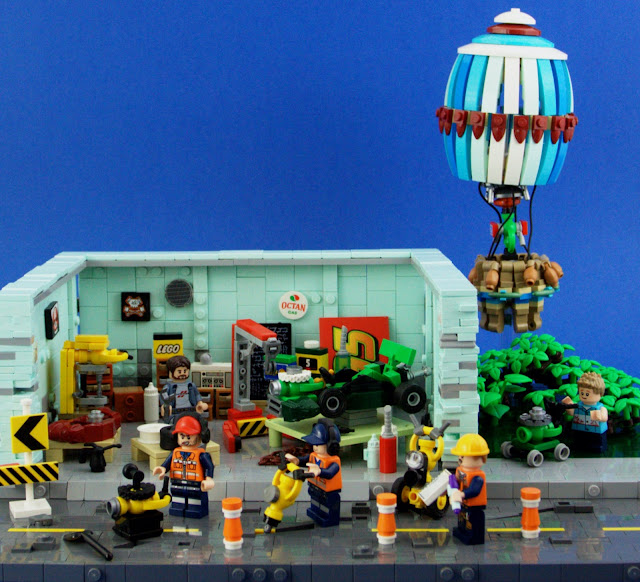 I built several little small MOCs with the seed part which fits into the Go Kart Garage scene.
Can you spot them all? 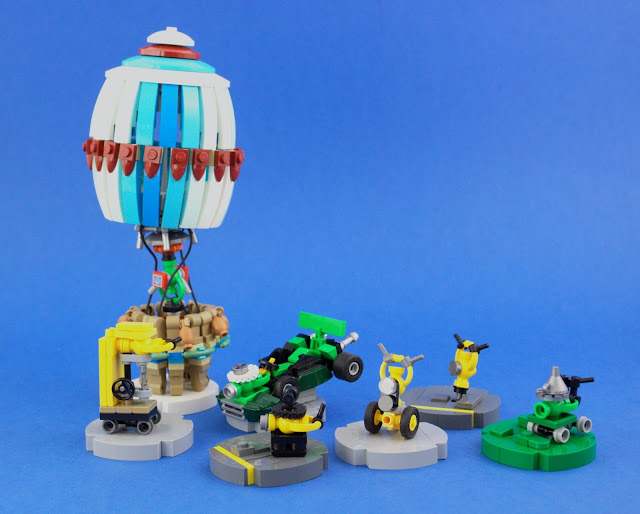 Of course, the kart itself, also a drill machine, a grass mower, a vibratory plate, a jackhammer, a Segway and a hot air balloon.

Esa: "Classic LEGO experience! Cars and machines and a variety of intelligent ways to incorporate the lantern in the builds."
Tim: "On top of so many great uses of the lantern, this is such an engaging scene with so much going on to enjoy."
Victor: "Managing to find new uses for seven lanterns is one thing, but integrating them so well into the build is another. They work especially well for the construction machines."

A nice ornate dressing table to beautify oneself. 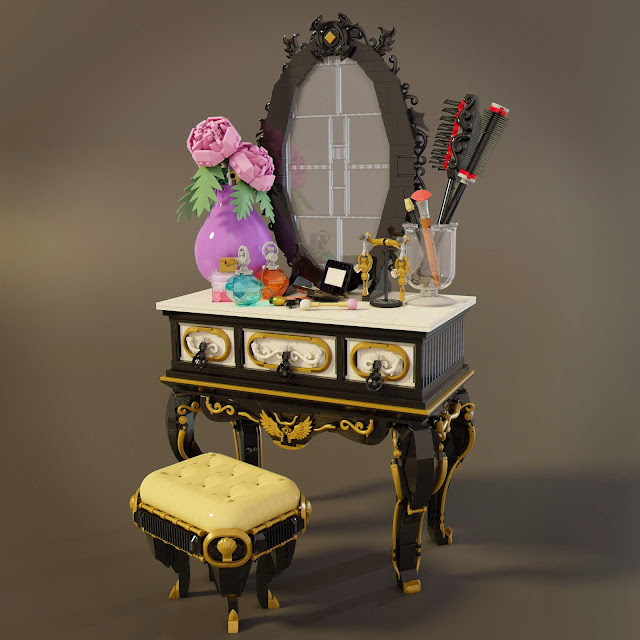 Seed part used on drawer knobs, perfume bottle lids, earrings and on the tips of both hairbrush handles. Model comprises of 2198 pieces. 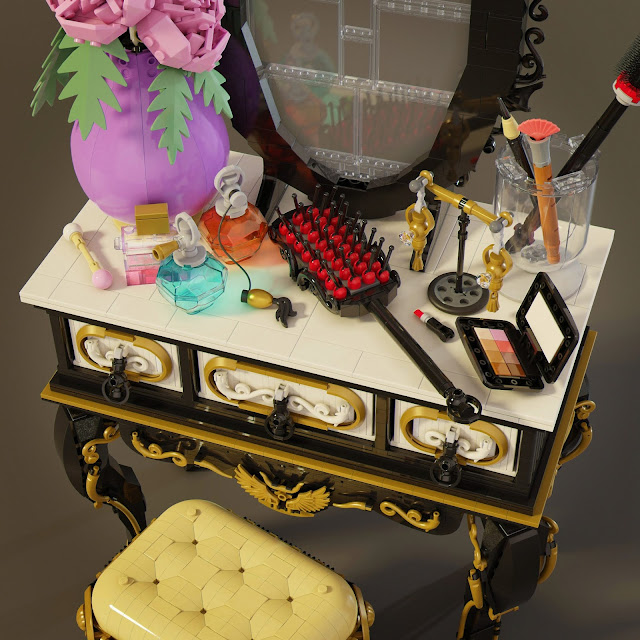 Considering the ornamental nature of the build, it was tempting to spam the seed part in every place possible since the lantern does look pretty ornate. But I wanted to keep it tasteful and only use it on areas that makes sense while the rest of the build only serves to provide context for the scene. The connection points of the seed part does prove to be useful especially on the perfume bottles where the "atomizers" are connected.

Esa: "Beautifully handled shapes and colours! This scaled-up build takes full advantage of the decorative nature of the lantern."
Victor: "This luxurious looking model is richly ornamented, and the lanterns blend in so well it's almost hard to notice them."
Tim: "Definitely a good idea to limit the use of lanterns, keeps us focused on the great uses you found. Lots of other great parts usage, and congratulations on capturing Rococo curves."

"All Hail the great Lizard King, HSSSS the 3rd!" 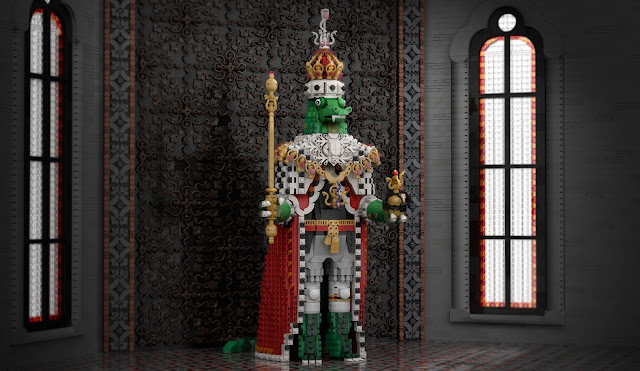 I have used the seed part in many ways for this build.  It is used for the tapestry in the back, the crown, the rod, the globus cruciger, and the jewel encrusted chain on his shoulders. There are 24,464 pieces to this build. 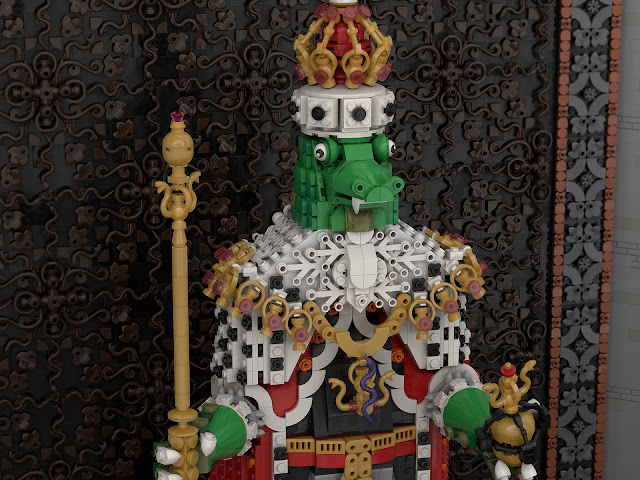 Tim: "Unlike TXJ's dresser, here the lanterns are generally used decoratively, and in great excess – which really works for this sumptuous model! Love the moody lighting effect."
Esa: "Very well executed large-scale build! Good use of the lantern in the various jewellery, and if that wasn’t enough it was fun to notice it on second glance also in the pattern on the back wall!"
Victor: "What a silly build! I love it! The lanterns are perfect for the Lizard King's crown, but my favourite bit is the inclusion of the lanterns in the decoration of the wall behind. It's a subtle detail but it brings a nice touch to the entry." 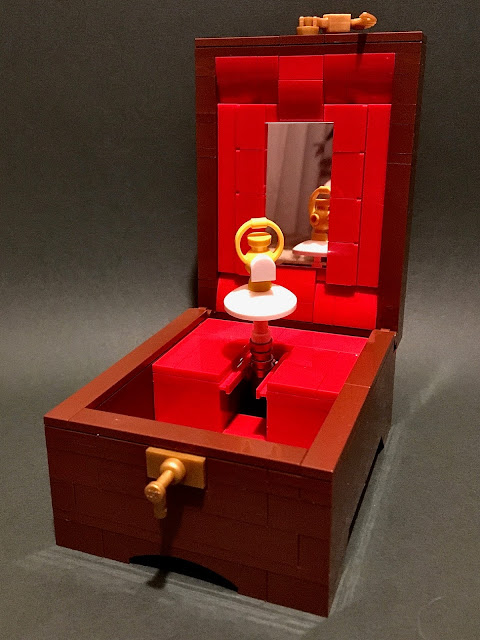 The lantern is the centre piece and perfectly depicts the pirouetting ballerina.
The box is fully functional in that the ballerina smoothly folds down as the box lid is closed. She is held on a technic axle with a rubber band to pull her upright when the box opens. 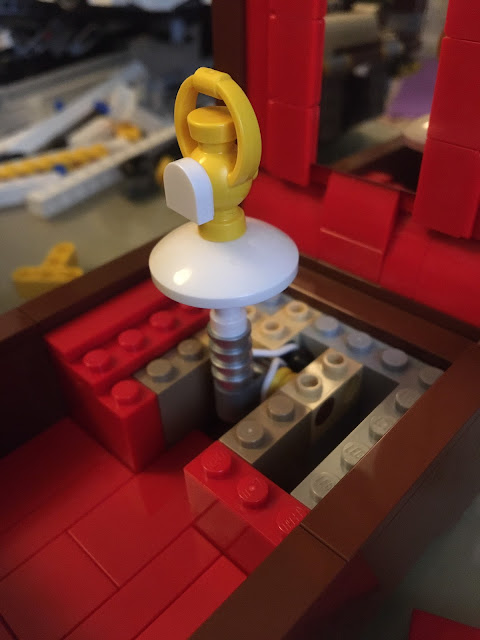 Victor: "It's such a clever idea to use the lantern as the body of a ballerina in the fifth position! It's amazing that one can build something so evocative with so few parts. The box compliments it nicely - I can hear the music just by looking at the photos."
Esa: "It’s so obvious! – 'It’s not a lantern, it’s a ballerina!' – sometimes you don't need much more. What a lovely little innovation."
Tim: "A perfectly ingenious use of the lantern, taken to the next level by making the model functional."

"Honey, I shrunk the baby!" 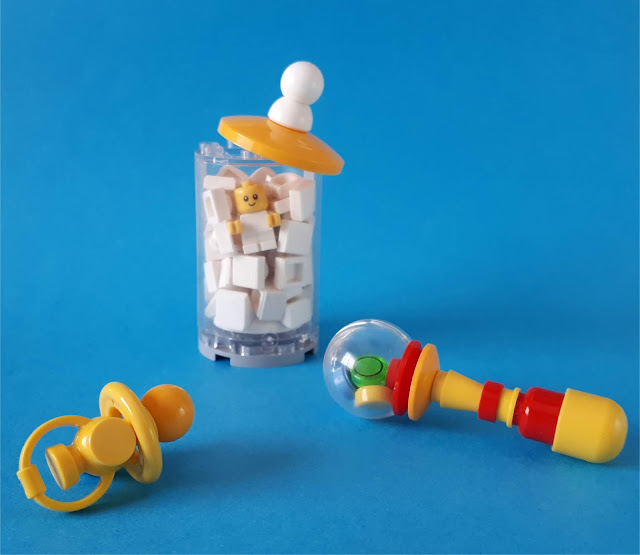 This time Dr. Wayne Szalinski made it big, or should I say, small...

Victor: "What a fun build! The three builds work well together, and the lantern makes a very convincing pacifier."
Tim: "The lantern almost seems designed for this purpose! There's some nice other part choices/usage here, and humour of course."
Esa: "Great use of the lantern shape and connectors as the pacifier in a very cute, funny and colorful composition."

As mentioned, we had a really difficult time choosing only five winners. Here are another four entries where we really agonised over whether to offer a top spot, and so instead we give you all a big shout out with bragging rights as Honourable Mentions, again in no particular order:

Plants vs. Zombies by th_squirrel 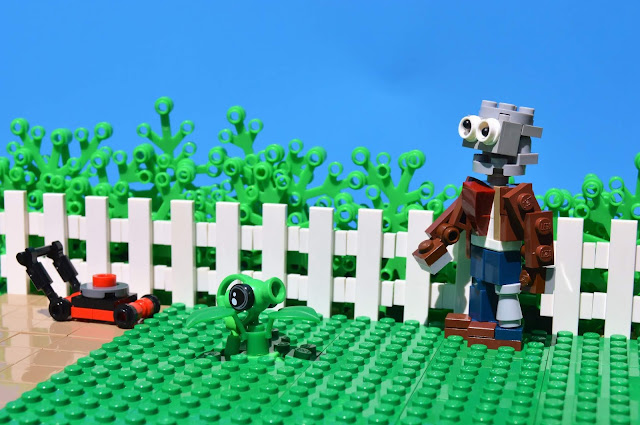 A LEGO adaptation of the classic mobile game that pits crazy plants against lumbering zombies! The build features the lantern seed part as the head of the peashooter plant, alongside a zombie and lawnmower based on the designs from the games.


The judges were blown away by how perfect the lantern was for this purpose!

A really nice way of using all the lantern's connectors to complete the build and also take advantage of the shape of the element as part of the visual appearance! 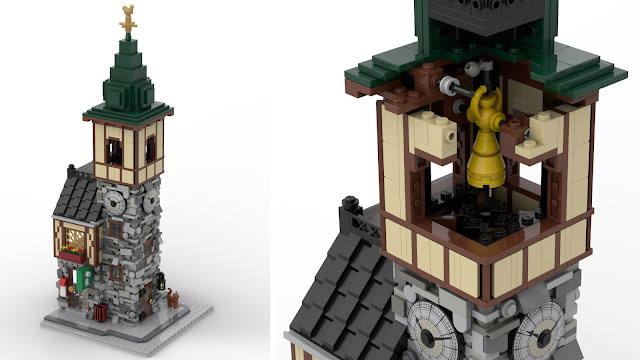 The clock tower of a Tyrolean mountain village, with the bell that really moves thanks to the lantern and a wire! The tower has been incorporated into the near tourist information building, creating a characteristic sight of this village.

This one also made great use of connection points and the extnsion of the cone into a bell is very clever! 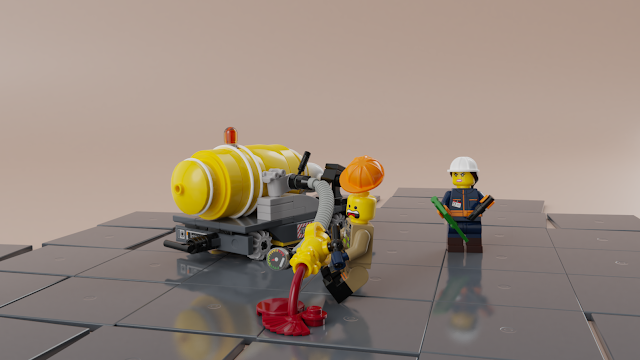 Always triple check when you're using flammable materials. Especially if your supervisor is watching you!


There were many 'pipe' usages for the lantern among the entries but this seems just right. Hilarious minifig posing too!


That's it! One last thank you to all contestants, the judges, Elspeth De Montes for getting this underway, and to the LEGO Group for prize fulfilment. On which note – we will be contacting the winners immediately to sort out delivery of their Fiat 500s!

What do you think of our choices? Who would you have chosen and why?

Prizes mentioned in this post are kindly supplied by the LEGO Group. All content represents the opinions of New Elementary authors and not the LEGO Group. All text © New Elementary unless otherwise attributed. Contest entries are © the named entrants.
Posted by: Admin Posted on 6/07/2020 10:24:00 am
Email ThisBlogThis!Share to TwitterShare to FacebookShare to Pinterest
Labels: Community, Technique