Back in June, we had a first for New Elementary; our first ever live parts festival! We've run several online parts festivals in the past, where we take some of the newest elements released by the LEGO® Group and challenge builders to explore what they might be used for. This time around, regular contributor Jonas Kramm proposed that we run a workshop at the Paredes de Coura (PdC) Fan Weekend in Portugal to see what builders could come up with - in the space of an hour! 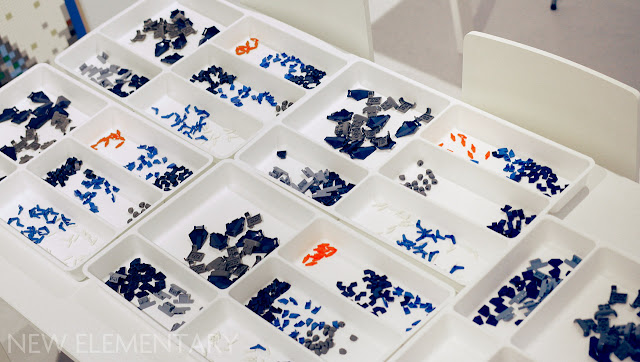 Thanks to the awesome support of the LEGO Group's AFOL Relations & Programs team and the amazing committee of the PdC Fan Weekend, we had a selection of some new pieces, some recolours of pieces and some general brick stock for everyone to get creative with. Over the next couple of weeks, I'm going to share the results with you here on the blog.


READ MORE: Find out what our first group of builders came up with in the space of an hour 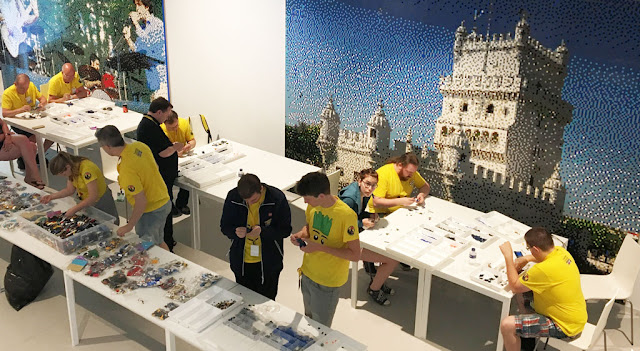 The PdC Parts Festival took place in the incredible environs of the Caixa de Brinquedos (The Toy Box) which is a huge, beautiful space for building LEGO models and running community events managed by Portuguese LUG Comunidade 0937. Jonas and I ran the workshop three times, with 15 people in each session. To kick each off, Jonas showed some of the models he created for The New Black parts festival in 2016, and then I introduced the parts that the builders were about to use. So let me do the same for you now! 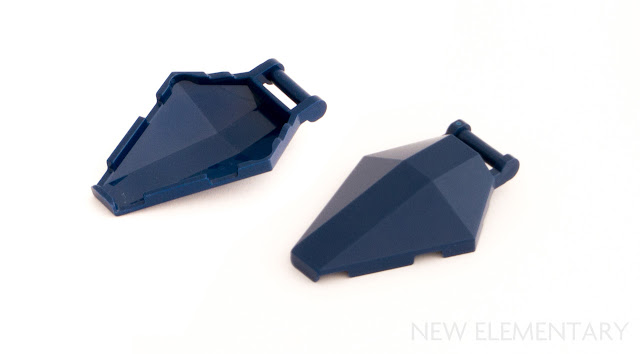 This windscreen looks quite specialised but each of its diagonal edges conform to established LEGO wedge shapes. As with all windscreens these days, it has a 3.18mm bar connection. It only comes in Earth Blue [TLG]/Dark Blue [BL] in three Nexo Knights sets. 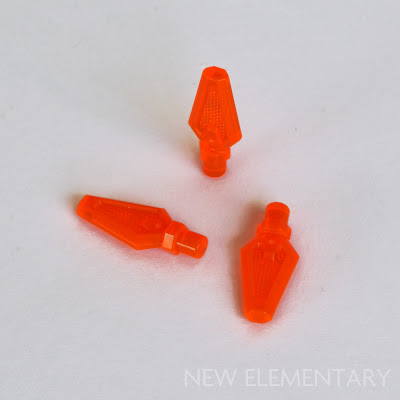 It doesn't come out in pictures but when you move this piece, the ridges in the centre create a hypnotic visual effect that is used across many Nexo Knights weapons. It comes in Transparent Fluorescent Reddish Orange [TLG]/ Trans-Neon Orange [BL] in nine Nexo Knights sets and now appears in Transparent Fluorescent Blue [TLG]/ Trans-Medium Blue [BL] in 75187 BB-8 (Amazon USA | UK).

As ABBA once put it, "Oh bang, a boom-a-boomerang / Dum-be-dum-dum be-dum-be-dum-dum", and that sentiment alone was enough for me to include this piece in our parts festival. Aside from the obvious stud and anti-stud connections, there are two 3.18mm bar connections too - along the exterior diagonal edges - so that a minifigure can hold the boomerang. It comes in Bright Blue and Medium Lavender. 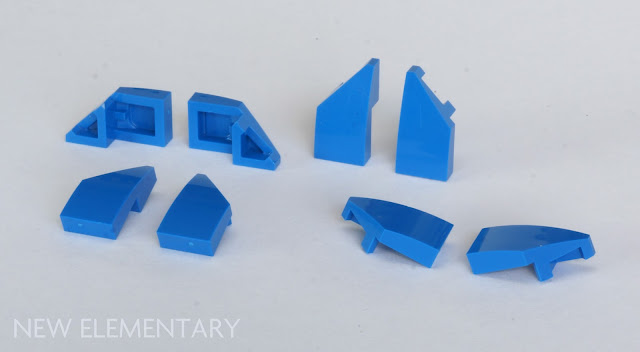 This pair of curved slopes fit into two LEGO 'families'. They're most similar to the 'baby bow' 1x2 curved slope (Design ID 11477) but have a 45° cut corner, like some of the other parts in this list. 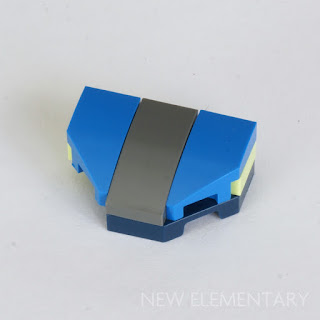 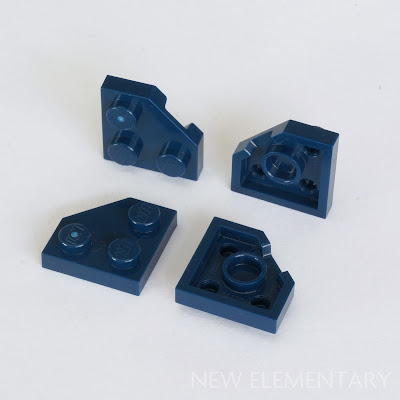 Now for some parts from early 2017 featuring 45° angles. Folks have been waiting for this one for years! It already comes in Earth Blue, Dark Stone Grey, Medium Stone Grey [TLG]/Light Bluish Gray [BL], Bright Red and White. 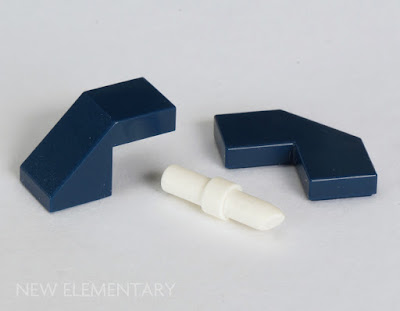 Don't ask me why I photographed these three together, as I am as puzzled as anyone.

On the left is an interesting addition to the family of 45° slopes. Similar to the 'Stafford slipper' (Design ID 92946), it is a modified 1x2 45° slope but this time, the single plate height is at the top and there is no stud. I nicknamed it the anti-slipper. So far it only comes in Earth Blue, Dark Stone Grey, Medium Lilac [TLG]/Dark Purple [BL] and White.

In the centre is an "old" part, dating back to the advent of Friends five years ago, but its arrival in pure White in LEGO Architecture 21033 Chicago in January this year was a big thrill because all other colours of this part have been dual-moulded using Medium Stone Grey with a bright lipstick shade.

A spectacularly poor name from TLG here, so I will mention that on BrickLink it is called Shoulder Mechanical, Nexo Bot - Soft Plastic, which tells us a lot more. Yes, it's the shoulders from those little robots,  and although it's also a bit "old" now (having been introduced in 2016) I chose to include it since it is an incredibly useful female-to-female 90° connector for 3.18mm bars. I never discussed it in great detail on this blog when it first arrived so was interested to see what people would do with it. It comes in seven colours across 15 Nexo Knights sets.

Products mentioned in this post were kindly supplied by the LEGO® Group. All content represents the opinions of New Elementary authors and not the LEGO Group.
Posted by: Admin Posted on 10/04/2017 01:38:00 pm
Email ThisBlogThis!Share to TwitterShare to FacebookShare to Pinterest
Labels: Community, Event, Parts workshop