It seems everyone has been enjoying the LEGO® colour collections that Elspeth De Montes displayed at Bricktastic, the show in aid of Fairy Bricks in Manchester, UK. Today she takes things up a notch; here are the MOCs she displayed whose sole purpose was to incorporate some colour collections within the build. 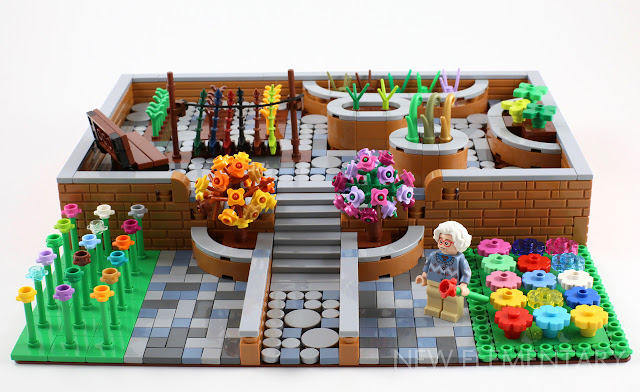 This walled garden was really just a way to display some LEGO flora in their various colours. When I was reviewing Saturn V, I noticed a new colour for Round Plate 1 x 1 with Flower Edge in Medium Stone Grey [TLG]/ Light Bluish Grey [BL] (6182167 | 33291) and so I lined up a few colours I had for a photo opportunity.

A few people commented to tell me about the colours I was missing, so I had to head to BrickLink for a little flower retail therapy. This part is actually called ‘Bracelet Upper Part’ by TLG, as one of the first sets it appeared in was Scala 3900 Bracelet Polybag back in 2000. Since then it has appeared in over 400 sets and 21 colours!

Elsie’s Walled Garden includes other parts such as the Plant Flower 2 x 2 Leaves - Angular (Element ID 4727, seen on the right of the above image) which officially only appears in the three colours in the garden, Green [BL]/Dark Green [TLG], Bright Green and Medium Lime [BL]/Medium Yellowish Green [TLG]. There are a host of other colours of this part that are not found in sets; you can see the full range of available colours and their current prices on BrickLink.

The Plant Stalk (Element ID 3741) has been around for longer than I’ve been alive! It first appeared way back in 1977 and is in nearly 500 sets now. I have all the currently available colours including the relatively rare, discontinued Brown [BL]/Earth Orange [TLG] which was only available in 10123 Cloud City. While not exactly the same colour, eagle-eyed readers will have spotted Reddish Brown is in the upcoming LEGO NINJAGO Movie set, 70620 NINJAGO City.

My favourite ‘stalk’ is the three-stemmed Mini Bouq. Stem W. 3.2 Shaft (Element ID 99249) which only comes in two colours, Green and Lime [BL]/Bright Yellowish Green [TLG]. Each appears exclusively with members of the CMF Series. You can see the full range of available colours and their current prices on BrickLink.

The poor hotdog vendor has to push an extended hotdog stand if you want to include all the Hotdog/Sausage (Element ID 25994 or 33078) varieties now available. 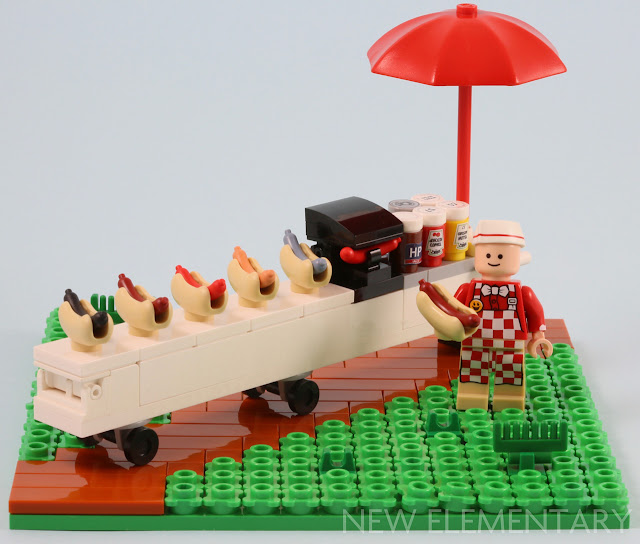 The tufts of weeds sticking out of the grass are actually the horse comb, which is supplied on a sprue as Accessories For Horse (Element ID 30112) and appeared in Green back in a few Belville sets in 1997. It is held in place by a very common part, Plate 1X1 W. Up Right Holder or clip (Element ID 2555 / 12825), but this actually only came in Green in 4337 Dragon Pod released in 2005, so is reasonably pricey on BrickLink. The newer version of this part, 15712, is yet to come in Green.

READ MORE: Continue to part 4
Posted by: Admin Posted on 7/24/2017 06:18:00 am
Email ThisBlogThis!Share to TwitterShare to FacebookShare to Pinterest
Labels: Colour, Old parts