Today, Elspeth De Montes continues her parade of LEGO® pieces in different colours! Why? Because LEGO. 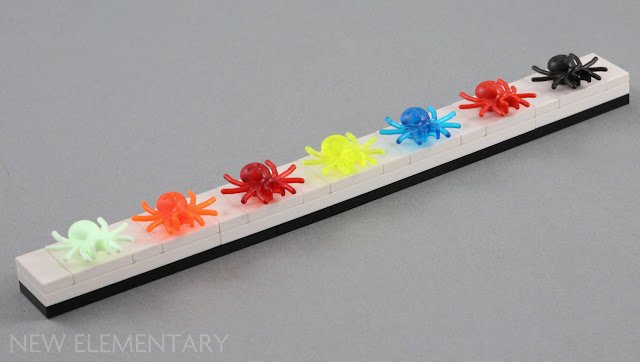 The hugely oversized Spider (Part 30238) is a force to be reckoned with, appearing in over 110 sets in 10 different colours. My own personal favourite is the Glow In Dark White [BL]/White Glow [TLG] breed which you see on the left (glowing thanks to the magic of Photoshop). It crawled into one LEGO Lord of the Rings set and four Monster Fighters sets, all released in 2012. Flat Silver [BL]/ Silver Metallic [TLG] only appeared in 30238 Spyclops Infiltration as part of the Ultra Agents theme, while Black is by far the commonest colour to be used in sets. See the full range of available colours and their current prices on BrickLink. 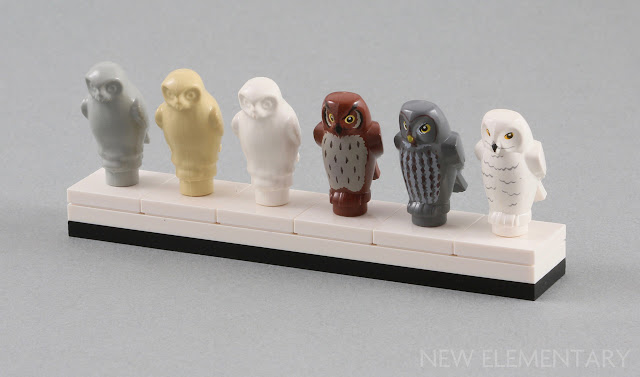 There are actually two variations of Owl in the LEGO world: rounded features (Part 40232) and angular features (Part 92084). The rounded variety come in seven colours, flying into around 30 sets - mainly LEGO Harry Potter. The printed owls are all of the Angular variety and although these clearly relate to Harry Potter, they do appear in a wider variety of themes. Angular owls only come unprinted in two sets: Reddish Brown in 45101 Fairy Tale Expansion Set and White in 10216 Winter Village Bakery, although at time of writing I noticed that a BrickLink seller was selling a rare red prototype. See the full range of available colours and their current prices on BrickLink. The Rock Crystal (Part 30385) was another popular collection with the younger fans at Bricktastic, especially as they look like they should be worth something. The first crystal to glisten in sets was Chrome Silver [BL]/ Metalized Silver [TLG] back in 1995 and there are now 17 different colours of crystal, 10 of which are Transparent variations. My own favourite is Glitter Trans-Light Blue which so far has only appeared in 41062 Elsa’s Sparkling Ice Castle. The priciest crystal is not silver or gold, but Chrome Green [BL] as it only appeared in two Space Port sets from 1999. See the full range of available colours and their current prices on BrickLink.

The frog (Part 33320) actually comes in seven different colours but you will not be surprised that the commonest breed is the green frog. Frogs hopped into sets in 2000 when a Trans-Green was found in 5826 The Queen’s Room. Sadly this frog escaped from my line-up but I do have one somewhere. Flat Silver has only appeared in one set from Monster Fighters, 9463 The Werewolf, and Red [BL]/Bright Red [TLG] also only appeared in one set; the game 3854 Frog Rush. See the full range of available colours and their current prices on BrickLink. 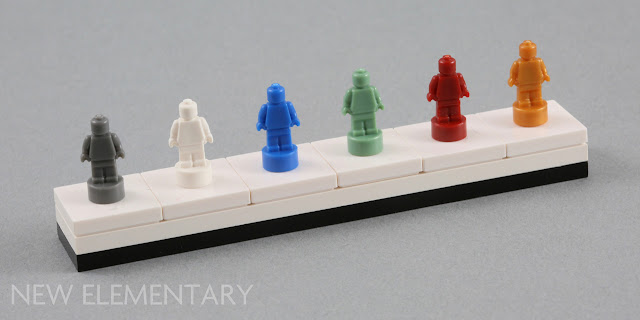 Trophy statuettes or nano-figures (Part 90398) were first awarded in Metallic Gold [BL] as an actual trophy, held by the Karate Master CMF Series 2 in 2010. Since then, a Copper trophy statuette was also carried by the Sumo Wrestler in CMF Series 3, while the Soccer Player from CMF Series 4 carried a Metallic Silver one and finally the Hollywood Starlet from CMF Series 9 also carried a Metallic Gold. More recently the statuettes have been appearing in the Architecture theme as actual statues and now there are a total of nine colours in about 13 sets. See the full range of available colours and their current prices on BrickLink.

I have not expanded into the printed versions although off the top of my head I can think of the Helicarrier figures and the Saturn V astronauts as printed versions of this part, but there are more. See how many you remember! 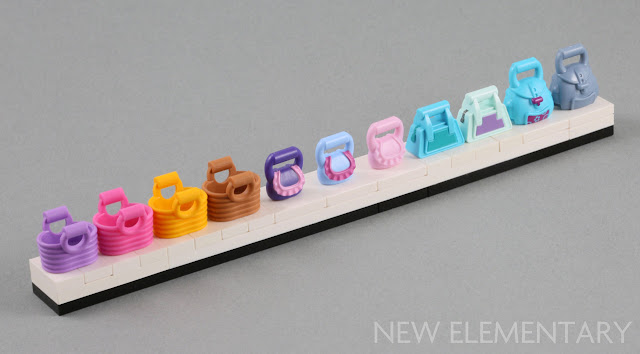 My collection of handbags held by minifigures far outnumbers the number of handbags I personally own as an adult female. I have a recurring character called Doris in some of my MOCs and these Baskets (Part 90392), seen on the left of the image, all belonged to her. I have all four official colours of this part which has actually appeared in over 40 sets from 2012 onwards.

Next along the line comes the Round Bag (Part 93090) which actually only comes in Bright Pink as a monochrome version. It was carried by Marge Simpson in The Simpsons CMF Series in 2014. The other two versions, Dark Purple [BL]/Medium Lilac [BL] and Bright Light Blue [BL]/Light Royal Blue [TLG] have contrasting ruffles, and there is also a Magenta [BL]/Bright Reddish Violet [TLG] variety available. These are all from Friends sets.

The larger Handbag with Zipper (Part 95867) is carried by females who need a little more room for their accessories or gym kit, and comes in Magenta and Pearl Gold [BL]/Warm Gold [TLG] as a single colour variation. Patty from The Simpsons CMF series 2 carried the Medium Azure and Dark Turquoise [BL]/Bright Bluish Green [TLG] version, presumably holding her many packets of cigarettes, and the Light Aqua [BL]/Aqua [TLG] with Dark Purple version was in the Friends 2012 Advent Calendar and a couple of other Friends sets.

The Schoolbag (Part 11245) is only available in Sand Blue but there are patterned variations in Medium Azure and Magenta. Again, these were mainly carried in Friends sets although the Sand Blue was found in 41075 The Elves Treetop Hideaway.

The final collection starts with the Clam, of which there are actually two variations depending on whether the inner lip is scalloped or rounded (see distinguishing image on BrickLink). The scalloped inner lip variety (Part 30218) first washed ashore in 1998, mainly in White within the Belville Recreation sets, although Medium Orange [BL]/ Bright Yellowish Orange [TLG] was in the hilariously named 1998 Scala set, 3117 Flashy Pool. This variety of clam appeared in about 28 sets until 2015 and came in the five different colours I’ve collected. The rounded lip (Part 18866) is a more recent mould, currently only supplied in White in sets from 2014 onwards.

Starfish (Part 33122) actually come in six different colours, four of which are Transparent variations. The first colour to arrive was Medium Orange in six different Belville Recreation sets, all released in 1998. Although they have mainly been used with a sea-related purpose, both Trans-Neon Green [BL]/ Transparent Fluorescent Green [TLG] and Trans Yellow twinkled as stars on the top of a Christmas Tree.

The Crab (Part 33121) comes in five different colours and first crawled into those same six Belville recreation sets released in 1998. Flat Silver is the most recent colour, and it was held by Zodiac Master in The LEGO Batman Movie CMF Series released earlier this year.


There are all sorts of ways to enjoy LEGO and to collect parts or sets. I do love the variety of colours, especially the rarer ones. I didn’t really intend to display my collection as it’s not really an intentional collection at all. This all started when I learned about the many different colours of LEGO Trash can when my LEGO character Doris was emptying her trash.

Let us know about your own collections and how you enjoy your LEGO hobby. Does anyone else collection colour variations? Comment and tell us about your collections, especially those rare red prototypes to make me jealous!


READ MORE: Continue to part 3
Posted by: Admin Posted on 7/18/2017 07:04:00 am
Email ThisBlogThis!Share to TwitterShare to FacebookShare to Pinterest
Labels: Colour, Old parts