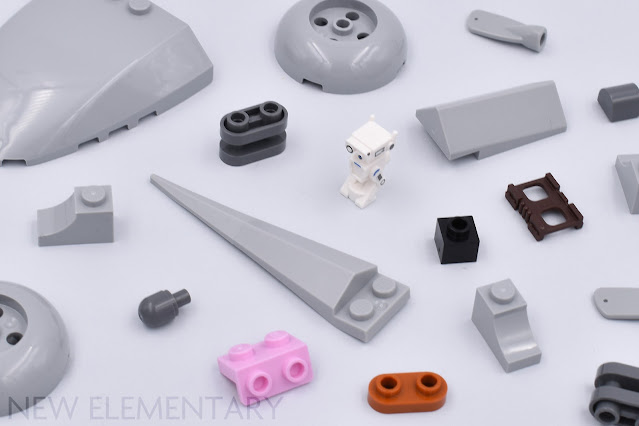 Today we’re taking a look at LEGO® Star Wars 75325 The Mandalorian’s N-1 Starfighter, a ship described as being faster than a fathier and as smooth as a gonk’s scomp jack, and 'a real classic', according to Peli Motto. But how does the LEGO version stack up? Read on and see.
The set contains 412 pieces and will be released on 1 June 2022 (Australia: 9 June) priced at 54.99GBP/ 59.99USD / 99.99AUD / 59.99EUR. If you plan on buying it from LEGO.com please do consider using our affiliate links, New Elementary may get a commission: USA LEGO Shop | Australia LEGO Shop | UK LEGO Shop/for Europe 'Change region'.

Recolours in 75325 The Mandalorian’s N-1 Starfighter

There is one new mould present in the set, but we will cover that in a moment. First let's examine the recoloured pieces. 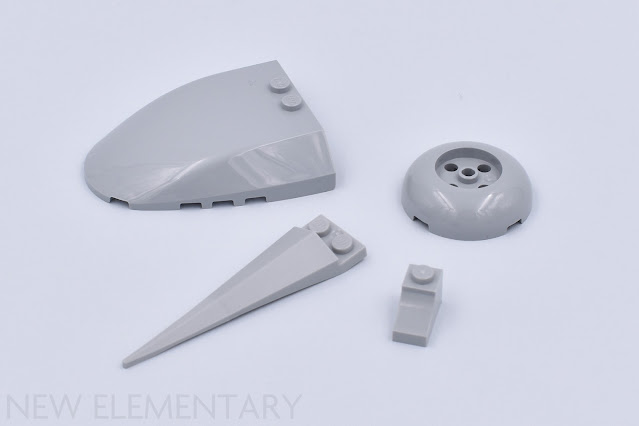 We get four recolours, all in what appears to be Mando’s favorite colour: Light Bluish Gray.
Dank Farrick, am I pleased with this selection! The windscreen element was previously only available in Speed Champions 76910 Aston MartinValkyrie AMR Pro and Aston Martin GT3 where it was Trans-Black and had a Valkyrie logo emblazoned on the front, which restricted its use considerably. It's great to have it in a plain, opaque colour.
The triangular modified plate was previously available in a two tone Dark Bluish Gray-Light Bluish Gray pattern, so it's great to have in a uniform colour. This has been on my wish list for quite some time.

The grey elements in the N-1 starfighter come thick and fast, and these rare parts are worth a mention: 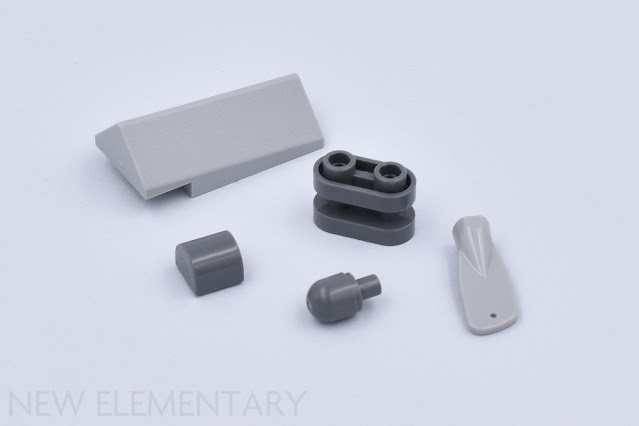 A few more useful rare pieces inject some colour into the set’s inventory: 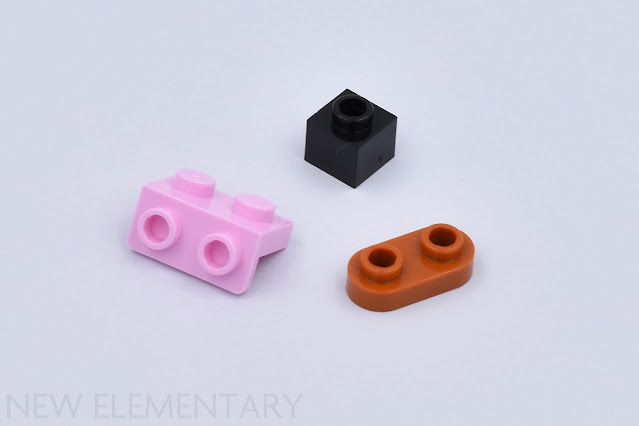 Minifigures, their parts, and accessories in The Mandalorian’s N-1 Starfighter 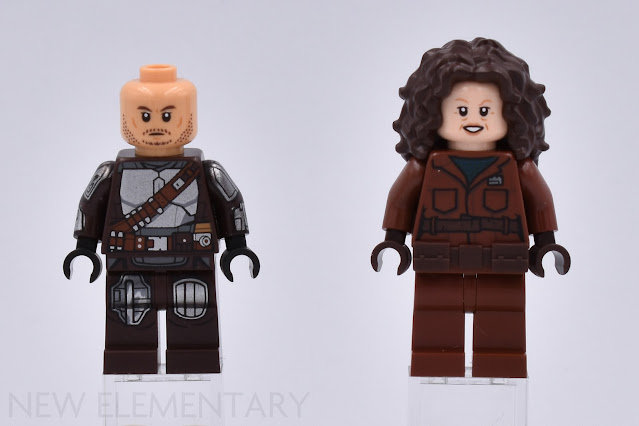 One of the draws of this set is the debut of Mandalorian series regular and Mando’s personal mechanic, Peli Motto. She receives a new head (6339217), and comes dressed in new Reddish Brown overalls (6400287). She also comes equipped with Minifig Hipwear Utility Belt (6400251 | 27145) in Dark Brown, which is a new colour for the part. I’m really pleased to get this minifig accessory in another understated colour as this element in other brown tones are pretty rare.
This is the sixth appearance of the Mandalorian, Din Djarin in his Beskar armour getup and I was lamenting receiving yet another duplicate of this figure to add to my collection until I saw that brand new handsome face (6406230) in a brand new colour: 371 Warm Tan under the helmet. It’s always great to see the range of non- Light Nougat heads grow, but a new skin tone is even better!
And if that doesn’t tempt you, take a look at this little fella:

This might well be the star of 75325 The Mandalorian’s N-1 Starfighter: BD Droid (6332132), a brand-new element. The figure has an anti-stud between its legs and a recessed stud on its back, lending it the functionality of a SNOT brick.

I had a little play around with it while looking at the dimensions and found some interesting, but not particularly useful connections.

Stickers for the N-1 Starfighter 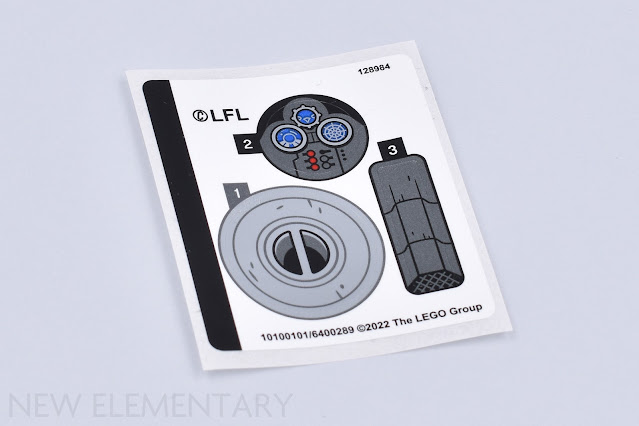 To round things off, we have a very modest sticker sheet, comprising of just 3 stickers, which I chose not to apply. 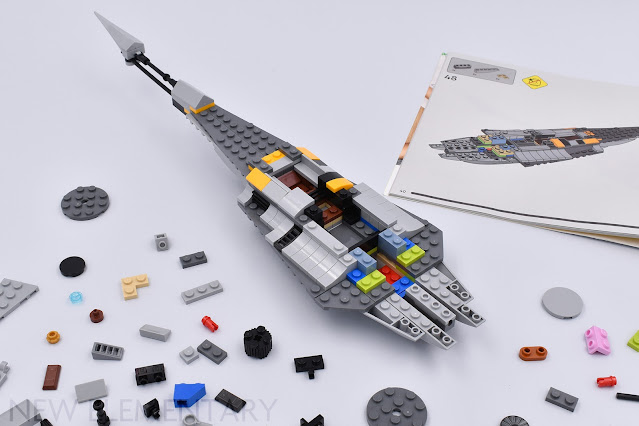 Building 75325 The Mandalorian’s N-1 Starfighter is very straightforward: it’s an almost entirely studs-up affair, with plates and bricks layered upon one another. 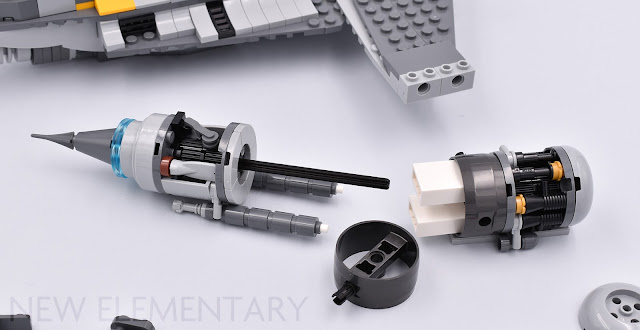 The engines are suitably detailed and more interesting to construct. Here’s a little trick I quite enjoyed: the use of the White 1x2x3 bricks to prevent the LEGO Technic cylinder elements rotating and keeping the engines aligned. 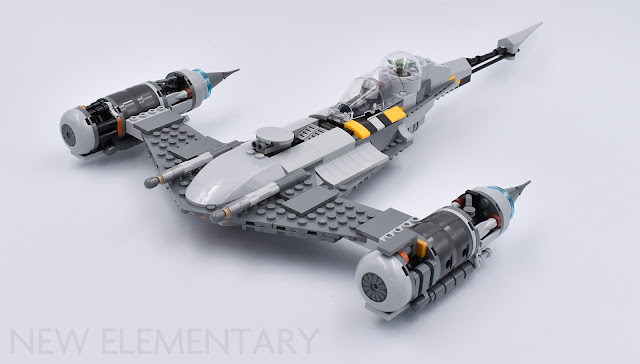 I was certainly impressed with the size of the finished model if nothing else. It has a real heft to it so you somewhat feel like you’re getting your money’s worth. 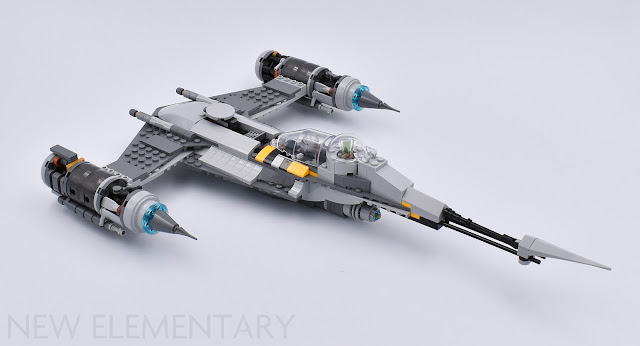 There’s an attempt to recreate the stripped-down feel of the ship we see on screen but I can’t help but feel that the ship has ended up just a tad bit messy. I like the use of the two grey colours but I think they could have been used more in blocks to differentiate the areas between the original yellow paint job and bare chrome would have been. There's a bit of dissonance between the stud heavy wings and the mostly smooth surfaces found on the rest of the body. I think this area could have been smoothed out with some tiles and have some yellow added to balance out the smattering of colour around the cockpit.

75325 The Mandalorian’s N-1 Starfighter is a set that will hold up to a good swooshing around by junior builders and will satiate some older fans with its great recolours, rare parts, and minifig selection (one of which is a brand new mould).  There are definitely other sets that offer a more interesting building experience and visually appealing final model at the same price point and age rating. Whether or not you'll pick this up depends on your affinity for LEGO Star Wars figures, or your levels of patience for those new parts to become available on Bricks and Pieces.
The set will be released on 1 June 2022 (Australia: 9 June) priced at 54.99GBP/ 59.99USD / 99.99AUD / 59.99EUR. If you plan on buying it from LEGO.com please do consider using our affiliate links, New Elementary may get a commission: USA LEGO Shop | Australia LEGO Shop | UK LEGO Shop/for Europe 'Change region'.