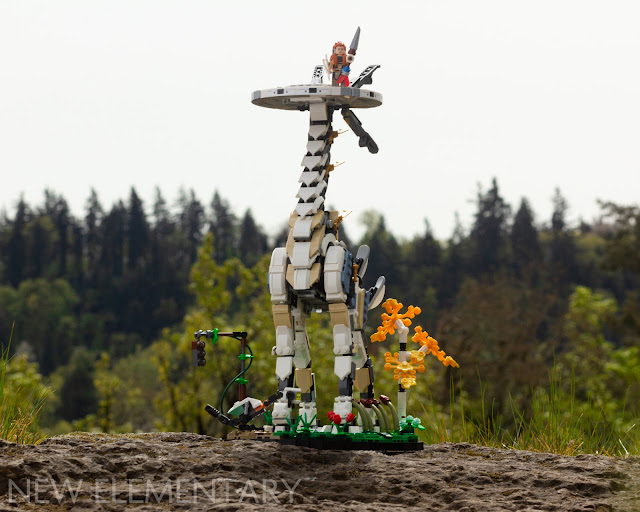 Horizon Forbidden West 76989 Tallneck – a 1222-piece collaboration between Guerilla Games, Sony Interactive Entertainment, and The LEGO Group – is now available for £69.99 / $79.99 / 99.99 CAD / 79.99€. If you're buying this set from LEGO.com please consider using our affiliate links, New Elementary may get a commission: USA LEGO Shop | Australia LEGO Shop | UK LEGO Shop/for Europe 'Change region'.
With new elements fueling this machine’s powerful pose, the most detailed minifigure ever, and a generous piece-to-price ratio this monumental set is worth a detailed look. New Elementary is examining this set with additional insights from a roundtable discussion with designers Isaac Snyder and Frederic Andre and other community members; we wish a special thanks to The LEGO Group’s AFOL Engagement Team (AFOLET) for organising our chat. 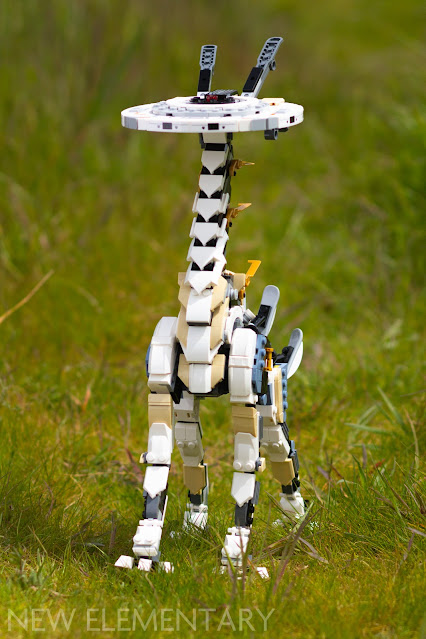 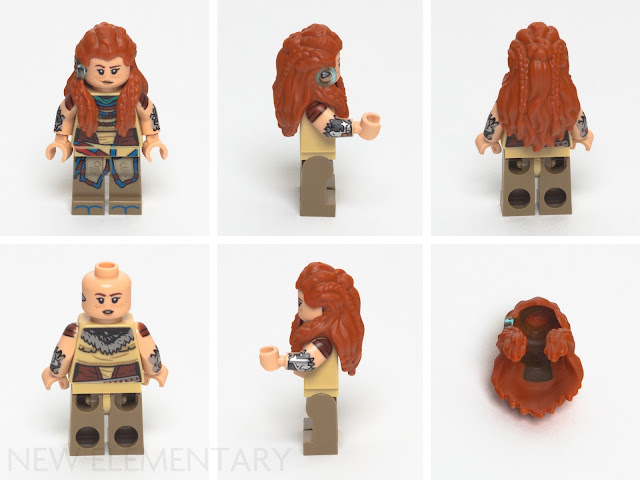 The singleplayer Horizon games put players in the footwraps of Aloy, the sole minifigure included in 76989 Tallneck. Her distinct loosely pinned and braided hairstyle is enough to set this figure apart from most minifigs, but that’s just the tip of the detail iceberg.

"I briefed our graphic designer, Casper, and I told him to make it the most detailed minifigure we've ever seen in LEGO. So we used printed legs, we used printed arms. We used sideways printing on the face to get the Focus as well. We were so excited when we saw the wig coming to life as well — it was sculpted by Gitte who is one of our senior sculptors here. We are so pleased with the final result on Aloy, she looks fantastic."

The dual-moulded hairpiece not only perfectly recreates Aloy’s voluminous locks in Dark Orange but also includes a small Transparent Light Blue ring around her Focus augmented reality earpiece. That round opening is about 2.95 mm in diameter so it can’t accommodate a 3.18 mm bar, but it is perfectly sized to encircle the Focus and simulate its in-game lighting effect. The supple rubber-like material of the hair has a bit of flex but its sheer size prevents arm movement beyond straight down and straight forward, making this jab at a Watcher just shy of lethal. 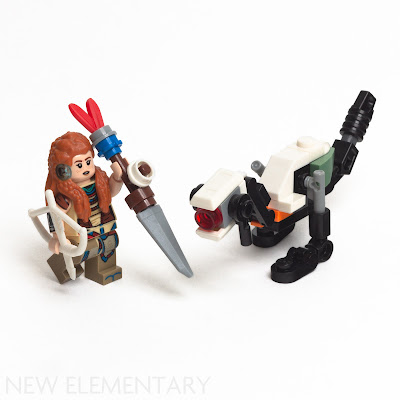 "That’s her first outfit in Zero Dawn and [Guerilla] confirmed it would be present in Forbidden West as well. We received a full cosplay detail of Aloy from Guerilla, including every single detail you could think about: close-up on the arms, shin guards, everything."

– Frederic Andre, LEGO designer
Aloy’s most recognisable outfit layers a skirt, armour pieces, necklaces, a fur-lined hood, and more to protect her from the hazards of post-apocalyptic America. A printed fabric skirt was out of the question so the details from her complex outfit were printed to achieve the most detail possible. The Focus device printed onto both sides of Aloy’s head is reminiscent of the hearing aid printed on the side of one City minifigure’s head from 2020 and, while there’s no indication head side printing will continue, it is nice to see that unusual print location used again. Except for the top of her head or on the sides of her legs, this minifigure features printing on every surface an official minifigure has been inked.

The Tallneck introduces one new mould with four copies, each crucial to building the beast’s hips. The ratcheting grip of rotation joints is an excellent way to combine stability and poseability but until now rotation joints have been somewhat large and consumed at least four modules of precious space. Since 2004 the main socket for rotation joints has been 48169 Technic Brick 2 x 2 with Pin Hole and Rotation Joint Socket which is nearly triple the size of this new mould. With these new 1 x 2 sockets, builders can add strong flexibility to legs, arms, tails, and more without the heft of earlier solutions.

This new compact size offers more versatility but requires sufficient reinforcement — sandwiching it between plates for example — to support its small stature. In addition to this updated form factor, the 1 x 2 rotation joint socket features a through-hole which allows Technic pins and axles to pass completely through. The brick’s bottom shows a reinforced post and the top has two hollow studs divided by a decidedly deep divot. The temptation of illegal connections using this recess was too much to resist… 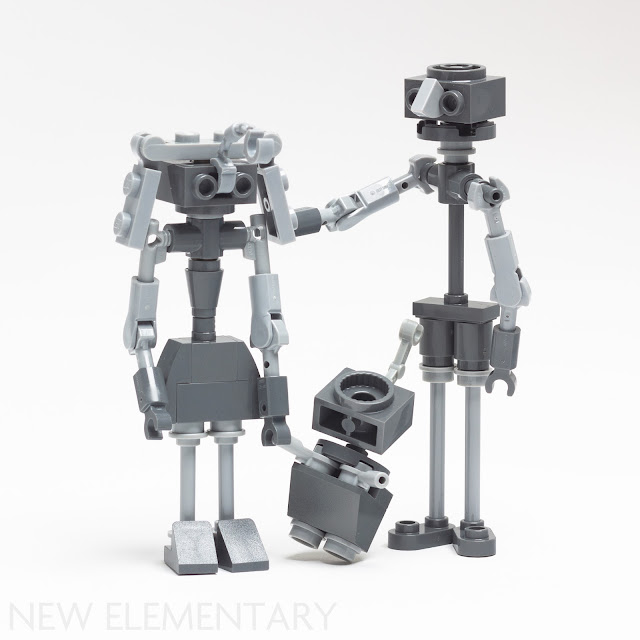 Rather than show off the bricks’ intended purpose, I stuffed handcuffs, a round corner tile, and a mechanical arm in the ample space between the bricks’ studs to create a robotic family. In some alternate universe, the Horizon games aren’t about humans left among the machines - it’s a world where these achromatic humanoid robots replace their fleshy masters and organic creatures freely roam the American West.

The zipline twists its way around a derelict traffic signal in the finished model and adds the first green tone to the growing selection of colours for ziplines.

"The vine — the zipline in Dark Green — we probably could have managed with another colour but I was really excited to get it in dark green because I could see that being super useful for loads of botanical models."

–  Isaac Snyder, LEGO designer
Uruk-hai swords have only been either Metallic Copper or Titanium Metallic/ Pearl Dark Gray, and Pearl Gold maintains the sword’s glittery status quo. The brown space gun will be useful for branching botanical details, and red pin feathers now exist to complement its clip counterpart found in 1999’s Adventurers theme. Several different bows have been made by The LEGO Group with drawn, relaxed, recurve and other variants but this is the first time any of them have been produced in white. 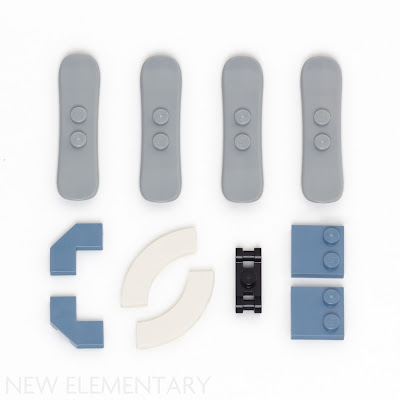 The snowboard element has existed for several years but has been limited to five mostly bright colours, none of which would have accomplished the effect Isaac intended.

"The snowboards were pretty necessary in my opinion because I really like the shape they gave for the radar array and we didn't have them in grey up to this point. That was one we definitely needed."

–  Isaac Snyder, LEGO designer
A couple new Sand Blue pieces add variation to the weathered body of the Tallneck and the recently-introduced 3 x 3 macaroni tile has been recoloured in ever-useful white. The similarly-new double handle 1 x 1 plate also adds a useful basic colour to its palette.

"You have to understand; both Isaac and myself, we are AFOLs as well. We do not change the colour of an element without a second potential build we could do with it as well. We try to serve the community as much as we can." 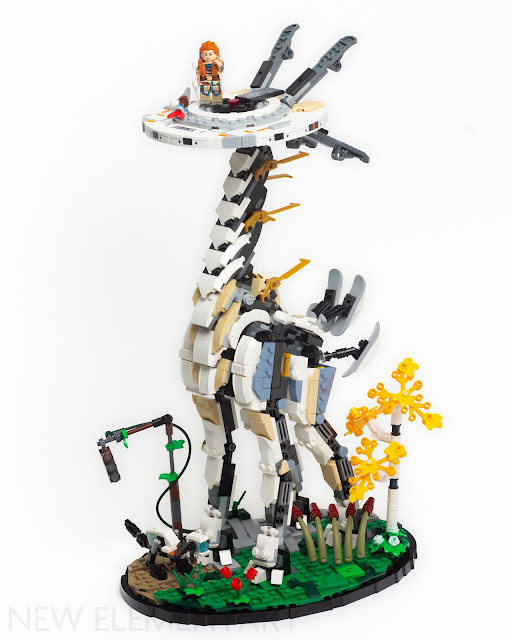 As a display piece, this set offers limited playability but looks great towering from the shelf of a geek den. With a height of 40 cm (16 in) the Tallneck only rises about half as high as it would be if it were truly at minifig-scale, and yet it still dwarfs little LEGO Aloy. For a pale machine, the Tallneck is surprisingly colourful with accurate Tan and Sand Blue accents to break up the almost-too-pristine white. If ivory were ever introduced as a new colour, this set would make exceptional use of (purposefully) off-white bricks.
The feet can be separated from the base and the Tallneck will stand on its own — provided you gently find a pose it balances in. The legs only have rotation joints at the hips and towballs at the ankles but if you’re up for some careful positioning the legs can be modified to add knees as I’ve done below. 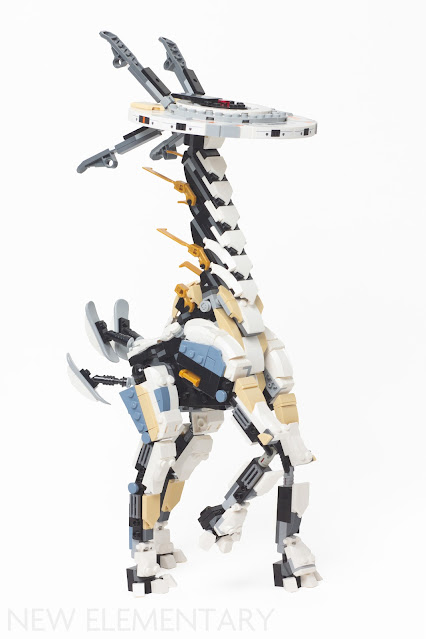 "The leg joint setup just wasn’t feasible with the weight of the model, although I did end up working it in such a way that if you want to just mod it slightly, you can usually swap out the Technic connectors for click hinges and then have double joints in each of the legs in addition to the hip connection."

–  Isaac Snyder, LEGO designer
Without modification, the base will support the Tallneck on three legs if you're comfortable trading some stability for an action pose. The oval base elegantly echoes the shape of the round radar head. 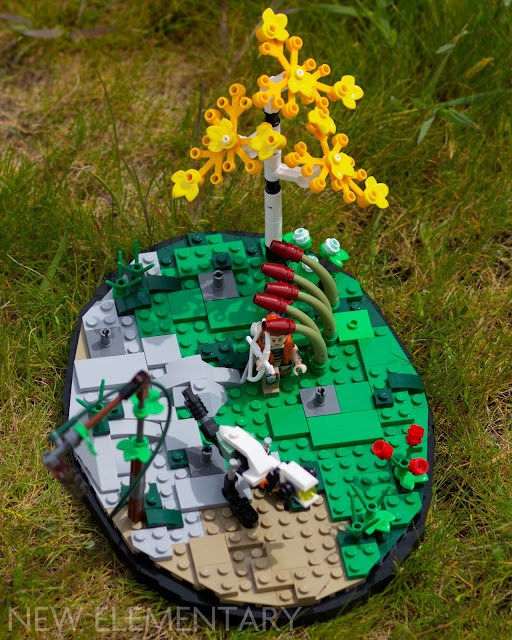 "I wasn't gonna do a square base. I've been working on LEGO Minecraft previously and would not want to do squares! So I tried an octagon, I tried a completely freeform landscape like a lot of AFOLs do with their models, and then eventually landed on the oval."

–  Isaac Snyder, LEGO designer
The base includes a variety of flora reclaiming the Old Ones’ structures 1000 years in the future. Four 2 x 2 pin tiles provide attachments for the Tallneck’s feet which align diagonally and secure the Tallneck to its literal stomping grounds.

"I basically just got [the geometry] close that I thought it was working and then let our model coaches check and make sure we weren't stressing anything, and it happened to work out. That was beautiful because I really wanted, if possible, to not have it squared to the base to have it look more natural as it's moving."

–  Isaac Snyder, LEGO designer
There’s not a single right angle connecting any of the set’s sections. This delightful angular assemblage doesn’t compromise strength either and the tall dinosaur’s joints bend rather than break. The centre tying all this together is a satisfyingly complex torso. 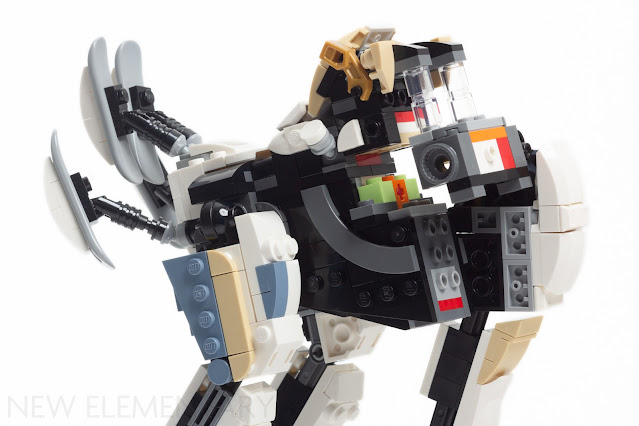 "I'm really happy with how the torso turned out. It's a very dense block of building to get everything we needed to work with the joints for the legs and so on but I found it really satisfying to get it to work just right."

–  Isaac Snyder, LEGO designer
That “dense block” Mr. Snyder mentioned is shown above in an exploded view. The Tallneck’s torso is host to several recently-introduced elements such as one white 86876 1 x 2 Brick with Stud on Side near the front. It was released just in January along with the 86996 Plate 1 x 1 x 2/3 with Hole in Stud in Spring Yellowish Green/ Yellowish Green - the beast’s chest contains two flanking a moderately new 1 x 1 Technic axle brick. The new smaller rotation joint sockets make room for all this complex construction while supporting the weight of the Tallneck’s radar-rich head. 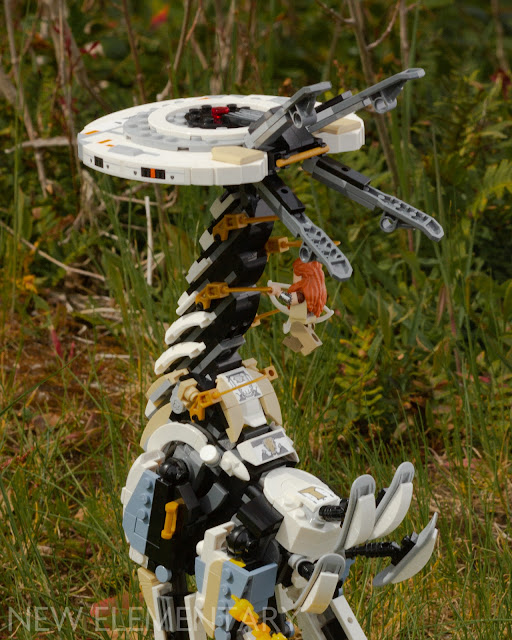 Isaac’s techniques make the Tallneck nothing short of breathtaking. The way the creature towers over the scenery with details translated flawlessly from game to brick does the Horizon series right. Aloy is as much a memorable minifigure as she is a memorable protagonist, and the scene completed by the Watcher and scenery cuts no corners. 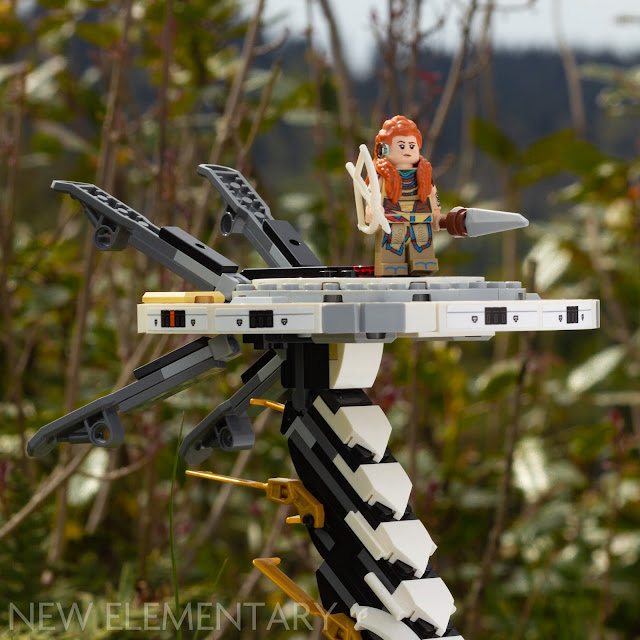 At £69.99 / $79.99 / 99.99 CAD / 79.99€ for 1222 pieces, Horizon Forbidden West 76989 Tallneck challenges the status quo of licensed set pricing. With value rivaling many themes internal to The LEGO Group, it's clear this collaboration with Guerilla Games and Sony Interactive Entertainment is meant to reach as many Horizon fans as possible. Isaac’s attention to detail and collaboration with developers and other LEGO designers has delivered a stunning set with power and poise. If you’re considering adding the Tallneck to your gaming lounge, please use our affiliate links, New Elementary may get a commission: USA LEGO Shop | Australia LEGO Shop | UK LEGO Shop/for Europe 'Change region'.

Posted by: Zachary Hill Posted on 5/03/2022 02:15:00 am
Email ThisBlogThis!Share to TwitterShare to FacebookShare to Pinterest
Labels: Horizon, Inside LEGO, Interview, MOC, Set review