Nicolas Geeraert returns today to complete our coverage of  January 2021 LEGO® Super Mario, looking at the smaller sets 71381 and 71382. Buying these? Consider using our affiliate links, New Elementary may get a commission: UK LEGO Shop | USA LEGO Shop | Australia LEGO Shop, for other countries 'Change Region'. Products in this article were provided by LEGO; the author's opinions are their own. 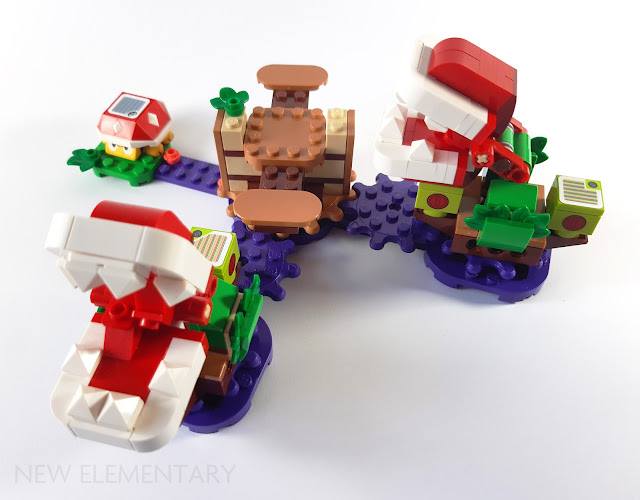 Today, we are reviewing two further sets from the January wave of LEGO® Super Mario, namely 71381 Chain Chomp Jungle Encounter and 71382 Piranha Plant Puzzling Challenge. Both sets are situated in the Soda Jungle world of the Super Mario Universe. Thus we can expect lots of purple to represent the poisoned soda and a series of matching enemies. 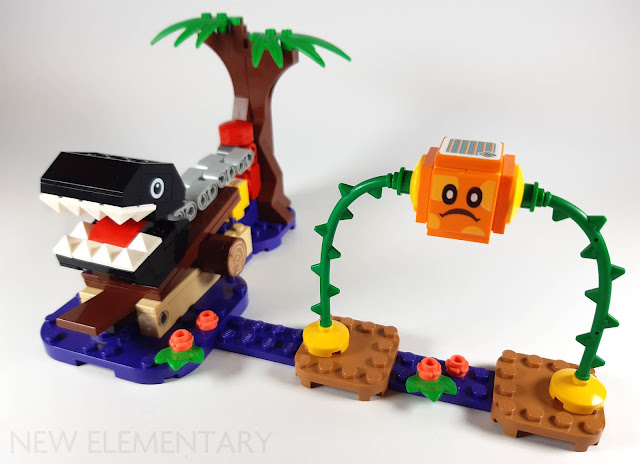 71381 Chain Chomp Jungle Encounter (£19.99 / $19.99 / 19.99€) features both a Bramball and a Chain Chomp as adversaries. The Bramball is instantly recognizable with its round body, bramble arms and suction cup feet. The brambles are a new part and look fantastic.

The brick-built Chain Chomp is guarding a Coin Block at the foot of the tree. The Chain Chomp rests on one end of a tiled plate acting as a lever. A forceful jump from Mario on another lever plate will cause the Chain Chomp to fall from the plate, leaving the Coin Block exposed. It is a basic, but effective mechanism.

In terms of new moulds, this set brings a single new part. Plant, Vine with Spikes in Green (73828 | 6335428) appears twice, making up the arms / legs of the Bramball. Each vine has 4 thorns on two opposing sides, 8 in total. The number of thorns and their position closely match the source material, suggesting that the part has been created especially for the Super Mario theme. 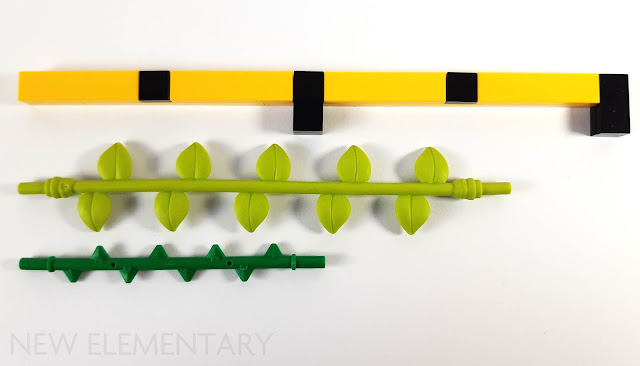 The vine with spikes is 10 modules long, but may only have a visible length of 8 modules when the vine is connected to other bricks. It reminded me of some of the vines we have seen previously, such as the Plant, Vine with Leaves, 16L in Lime (16981 | 6074884) from the Friends series.

The flexibility of the materials suggests that the piece was either made from polyethene or styrene butadiene styrene (SBS). It is a lovely piece, and I hope that we will see this piece re-emerging in other sets. Either way, it would be a great element for a MOC featuring dense plant growth, such as a jungle.

A number of parts have been recoloured: 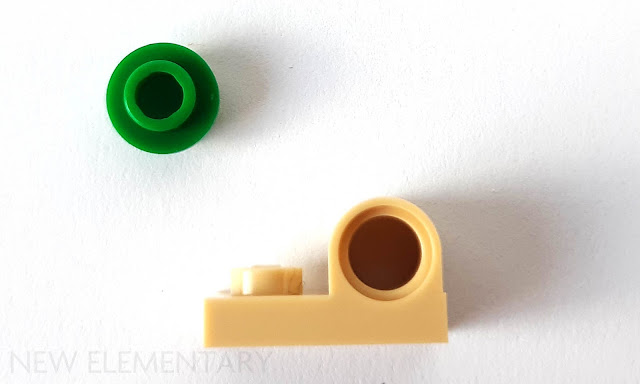 The Plate Round Corners 8 x 8 2/3 Circle with Reduced Knobs, shown second from left, appears in Dark Purple (66790 | 6335428) for the first time. The addition of this plate completes the line-up of the different plates with round corners in this colour. 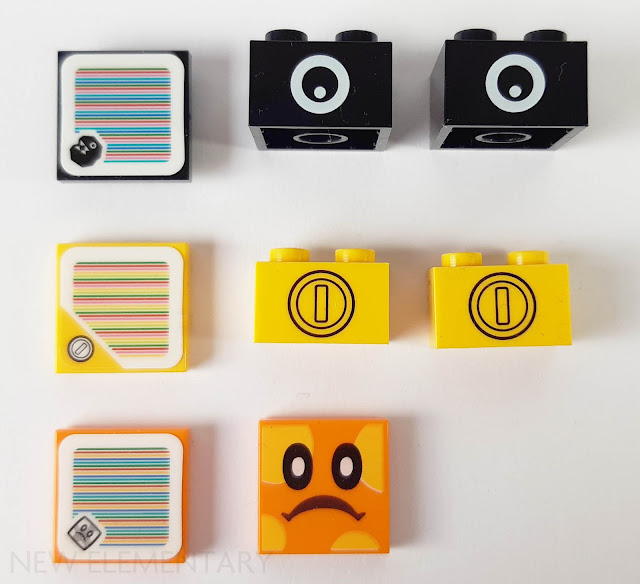 Some of the Super Mario barcodes are also included. Normally, the barcodes appear on 2 x 2 tiles, but the Chain Chomp bar code appears on an inverted tile. The new codes are: 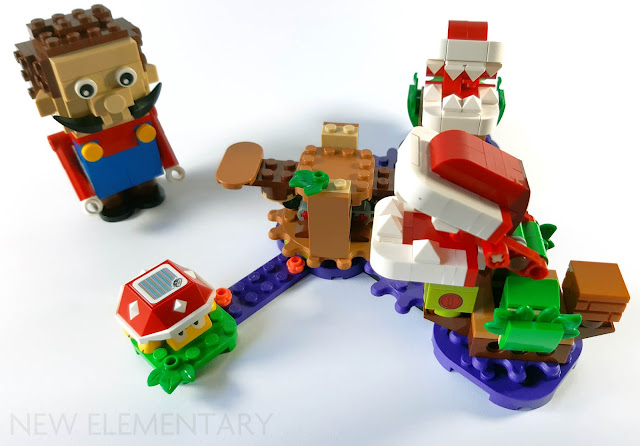 Next we have 71382 Piranha Plant Puzzling Challenge (£24.99 / $29.99 / 29.99€); my brick-built Mario is not included! The antagonists are two Piranha Plants and a Spiny. Both types of enemy featured in the first wave, although it looks like the Piranha Plant has been constructed in a subtly different way. 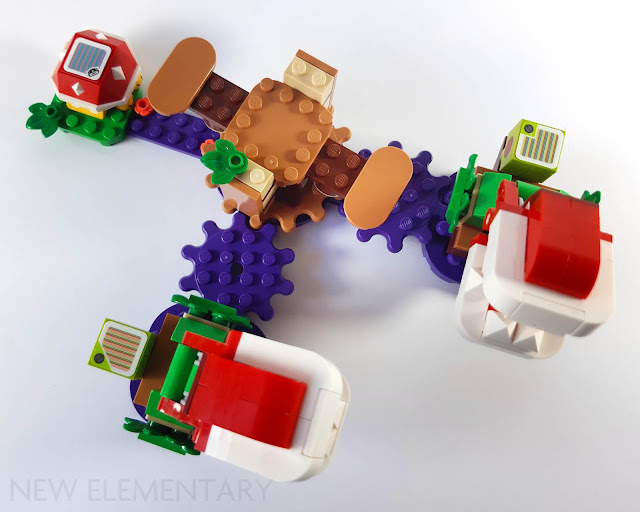 Each Piranha Plant guards one or more Coin Blocks. To access the coins, one needs to spin the central unit until the platformis aligned with one of the plants. By having Mario jump on the other side of the platform with sufficient force, the plants are meant to tilt away, leaving the Coin Block exposed. It is a cool idea, but the mechanism does not work quite as smoothly as anticipated. This makes it quite tricky to get the Piranha Plant to move.

No new moulded parts appear in the Piranha Plant Puzzling Challenge, but we do have some new parts in new or rare colours: 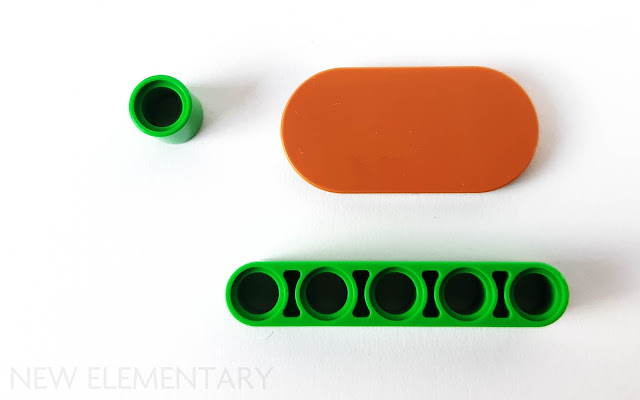 Different ‘Splat Gears’ are also included, both of which are recoloured and still exclusive to this set: 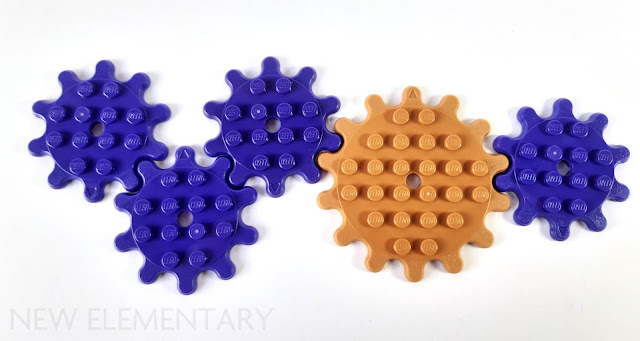 The 6 x 6 Splat Gear with 14 Teeth is new in Medium Nougat (35446 | 6338455); only one is included. Previously, this Splat Gear has only appeared in much brighter colours, which wouldn’t be suitable for every type of MOC, and thus an earthier colour seems welcome. 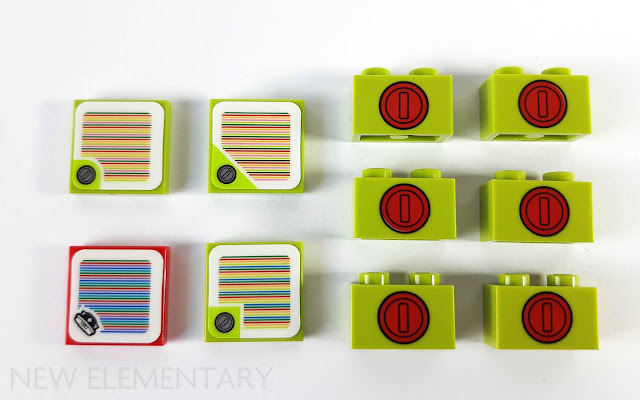 Again, different printed parts are included, the most useful of which is probably the Brick 1 x 2 with a Red Coin Print in Lime (3004pr0068 | 6334677), of which 6 are included. The other parts are all barcodes. Interestingly, the three barcodes in Lime are all subtly different. Presumably, this was done to make sure that players cannot cheat by jumping on the same tile three times. The list of barcodes is:

Both 71381 Chain Chomp Jungle Encounter and 71382 Piranha Plant Puzzling Challenge are relatively small sets situated within the Super Mario Universe. Colourful, relatively easy to build, and with good playability potential. Although I didn’t have an official Mario to assist me in the review, it was good to have a look at the mechanisms in each model. I imagine they would be great fun for a young audience to manipulate the sets and collect points in the process. In terms of parts, both the Vine with Spikes and splat gear in Medium Nougat stood to me as welcome new parts with good MOCing potential.

Consider using our affiliate links if you're buying form LEGO.com, as New Elementary may get a commission: UK LEGO Shop | USA LEGO Shop | Australia LEGO Shop, for other countries 'Change Region'. Products in this article were provided by LEGO; the author's opinions are their own.

Posted by: Admin Posted on 6/13/2021 04:16:00 am
Email ThisBlogThis!Share to TwitterShare to FacebookShare to Pinterest
Labels: Set review, Super Mario