It's our 8th anniversary of publishing LEGO® articles today! As part of our celebrations, here's a fun article from Eero Okkonen, who even explains why LEGO part 26047 is a good thing.

The basic unit of LEGO® System is not a millimetre, module, stud or plate. It is a part, or piece, or element (or sometimes probably brick, but that being also a subtype leads to confusion and turmoil). All sets and MOCs and exhibits and contest entries consist of pieces and, as this is New Elementary, we like to talk about pieces.

This little article (articlette?) goes through 8 pleasant, nice and useful pieces. There is no common theme binding them together; some are old, some are new, some are super common and some might be a bit obscure. This is not a “top 8 pieces ever” list - just a little love letter to helpful little moulds that make building fun.

This friendly member of plates family was added to the System in 1987, in the same year with its brick counterpart 2357 Brick 2 x 2 Corner. The idea was not new: 702 Brick 4 x 4 Corner was introduced in 1955 and its cellulose acetate precursor 4x4 Brick 4 x 4 Corner Right with 2 Slots a year earlier! We’re talking about “nine years after World War II” here. Phew! Puts the eight years of New Elementary into perspective.

Since 1987 the corner plate has helped builders to make small but durable constructions, reinforcing zig-zag walls and lending a helping hand whenever it’s needed. It doesn’t look like an obvious inclusion to a system of building bricks, but it is very, very good. A humble servant of human beings!

I think it could be referred to as vinkel brick, based on Swedish word for corner; as in a dialectical Finnish term vinkkeli, which means a felt boot shaped bit like 2420.

Why would you not google this? Just look at 26047: It’s cute! And it looks like things: a little foot, a padlock, or maybe it’s a snail… It’s small and it has a stud, an antistud and a 3.18 mm bar. But the best thing is that it is rounded. This is a new trend in part design, but a pleasant one. It might go back to Technic plates from the early 80s like 4263 Technic Plate 1 x 4 with Toothed Ends, but has seen its renaissance with 26047 and the obviously useful 35480 Plate Special 1 x 2 Rounded with 2 Open Studs.

The best thing about being rounded? It makes a simple stud connection into a viable, working joint! Simple, down-to-earth genius. With the bar the piece allows a very large range of motion in a small space. A groundbreaker! Its beautiful shape helps, too - I think 26047 makes a good hand in Miniland scale, and excellent mitten thumb on larger scale. Jolly good. 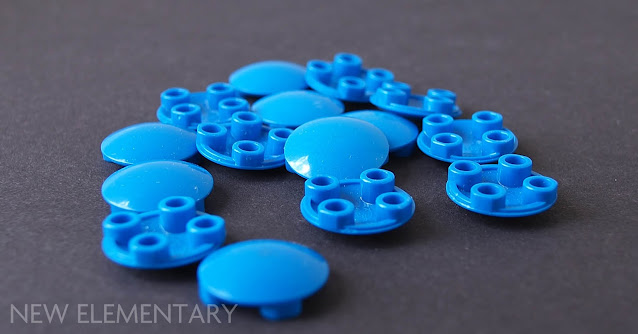 Anyone familiar with my MOCs knows that I use boat studs a lot. What is the secret behind this piece, often found under boats and spacecrafts to ensure smooth journeys over living room carpets?

There are many! The first one is the smooth shape: There is not many smoothly shaped System pieces with basic, down-to-earth connection points. Boat stud is, in addition to being circular, smoother all over. It looks good, it gleams nicely, and it can be used to create flowing, organic shapes. But that’s not all! The piece also comes in 30 colours (plus some additional ones with prints). For example, Sand Yellow|Dark Tan was introduced in 2021 Marvel sets. And the studs are hollow! This has been proven essential when building teeth.

Fun fact: boat stud comes with 17 different prints. First of them, 2654pr0007 Plate Round 2 x 2 with Rounded Bottom and Headlight Print appeared in 1995, but builders had to wait for the next one until 2012. 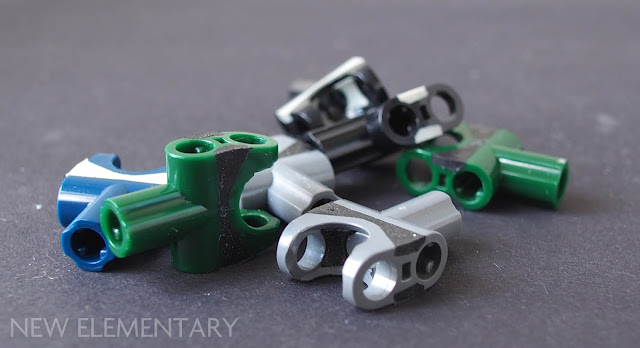 Bionicle is the best known line of buildable, ball-joint-using action figures, but the ball joint system was already introduced in Slizers (also called Throwbots) line in 1999. in 2004, in Bionicle titans sets, a new socket was introduced: 47326 “family” mould includes three sub-numbers with Black, Light Bluish Grey and White rubber insert. The rubber enhances friction, but not hugely; the real treat on this piece is the positioning of the axle hole, running towards the socket!

Why is this essential? Think human bones; they’re sort of sticks with a joint in the end. 47326 makes it possible have this joint connected straight to a axle (or 3,18 mm bar, if you’re feeling lucky with friction), omitting cumbersome connections needed with the usual 32174 Technic Axle Connector 2 x 3 with Ball Socket, Open Sides and its modern relatives. The axle can then be covered with 2 x 2 round bricks, barrels, CCBS shells or anything! Job well done. Thanks 47326; your grace was discontinued in 2007, after three blessed years, and return seems unlikely. Fortunately Bionicle sold well, and these pieces are not too rare.

Tip: The axle holes on these pieces are “fun”, and a stud can be connected into them - though not very sturdily, and probably not legally. 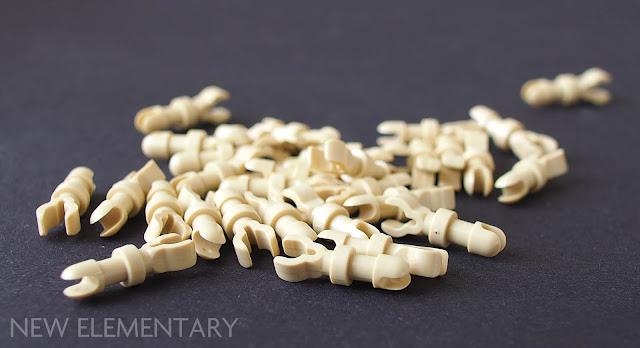 The name speaks for itself; the original, swinging arm of a skellington! This piece, which is as old as me, appeared in 1995. It seems to be dearly departed for now; the last sighting was in 2017 on model skeleton on 41318 Heartlake Hospital. I suppose there is a department of alien sciences there, as minidolls look nothing like classic skeletons.

6265 has a unique tiny ball socket, a 3.18 mm bar in the middle, and a clip on the other end. It’s not a very versatile piece, but I think it is the best finger option available. The tiny ball socket is almost rounded for a finger tip, too. Being available in Tan (from Ninjago skeleton dummies) helps, as it can be used as bare fingers on character models with tan skin. It also comes in White, Black and Sand Green. The two latter are exclusive to older Harry Potter sets, and therefore hard to come by. Even the white ones seem to be rarer these days. 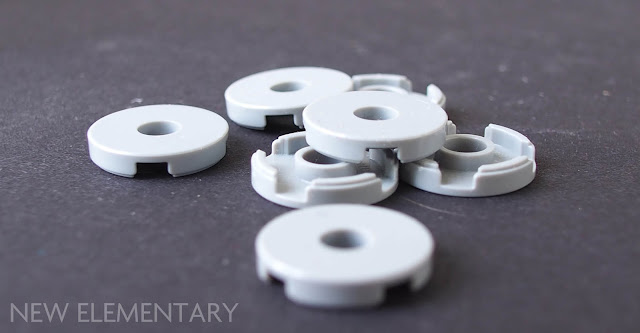 15535 was introduced 2013 - same year as New Elementary! - and is still active. It looks like an LP with a huge hole, but that’s not the point. The point is that there aren't many tiles with a pin hole (note; it's not an antistud) on the top. 3176 Plate Special 3 x 2 with Hole comes close, and is an honorary mention here (there is a tile version of it, 48995, but it’s incredibly rare).

The top connection is also very, very sturdy when used like an antistud. I love it, it can be relied on! This piece is the best option, combined with a 2x2 jumper, to create two-plate thick 180 degree SNOT structures. Therefore I use it in my models hidden inside their guts as well as on very visible parts, like necks and arms, where its round shape makes things more organic - an essential aspect for a figure builder. 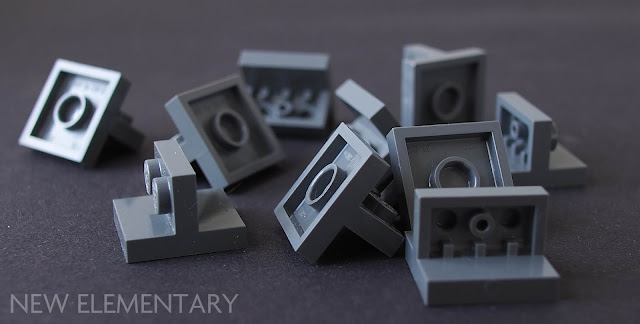 Special bracket indeed! This one is three years old, but has already appeared in over a hundred sets and in eleven colours. I doubt that many fans foresaw the coming of 41682; there are many parts in the brackets family, and this is far from usual. The piece has only plate-thick appendages, and its 2x2 tiled bottom sticks wonderfully. It should do, as it was originally used on little stompy feet of large Minecraft figures.

But the beauty of this bracket is not in its practical uses (I use it only sometimes). It is nice mathematically and theoretically, as it’s a physical manifestation of the 5:2 rule, the guiding light of all LEGO mathematics. Oh the joy of building!

The ball joint with through axle hole from 2006 is in a way an update of the older part, 32474 Technic Ball Joint from 2001. 32474 didn’t have an axle hole going all the way through (but it did have an antistud). The piece was genius, of course: it enabled easily built custom limbs. In a theory. The TECHNIC “hole” (Bowl? Pothole?) was very loose, and was therefore used mostly as a decorative element… Until 2003 and the release of Bionicle’s big bad Makuta, with this ball joint as the neck connection. Thus Makuta was easily beaten as he was hard to handle without automatic decapitation due to lack of friction in the neck department. You can just imagine 8-year-old Eero being dissatisfied.

In 2006 Bionicle sets used ball joint necks again and introduced 53585 - with a through axle hole and pleasant amount of friction. It also allowed a number of tricks with the new 55013 Technic Axle 8 with Stop; this stop-axle family was later extended. Both new and old ball joints are still in production, one for joints and one for decorative balls. And so is good. Only if they made 53585 in more colours than just Black and Red.

Posted by: Admin Posted on 6/10/2021 10:04:00 am
Email ThisBlogThis!Share to TwitterShare to FacebookShare to Pinterest
Labels: CCBS, Old parts