Kev Levell (@kevlevell) gives you double LEGO® Star Wars love today as he examines the parts in 75300 Imperial Tie Fighter & 75301 Luke Skywalker’s X-Wing Fighter before creating MOCs using both their parts. Buying these sets? Consider using our affiliate links, New Elementary may get a commission: UK LEGO Shop | USA LEGO Shop | Australia LEGO Shop, for other countries 'Change Region'. Products in this article were provided by LEGO; the author's opinions are their own. 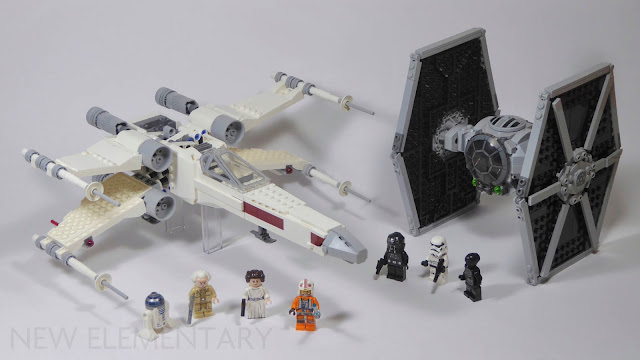 These two new iterations of iconic LEGO® Star Wars ships have been available for a little while now. There are a very small number of notable new parts and even dealing with both sets at once, it is a scant offering. However, both sets feature elements that I wanted to investigate. None of the parts are presented in very great numbers either, but their connections and geometry may reveal them to be slightly overlooked gems. I’m hoping they aren’t disappointing, unnecessary introductions into the inventory.

I have elected not to use the stickers for 75301, and there were thankfully none provided with 75300. 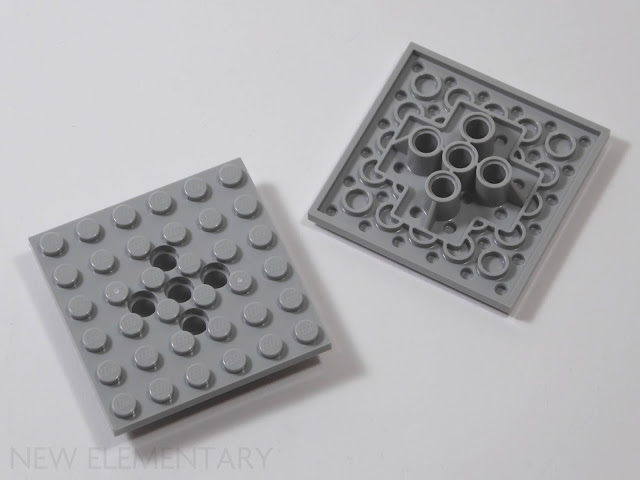 The major part of interest in the new Tie Fighter is the thing holding the “solar array wings” on: Plate 6 x 6 with 5 Center Holes in Light Bluish Gray (6326482 | 73110) and fairly obviously there are 2 of them. They are exclusive to this set currently. 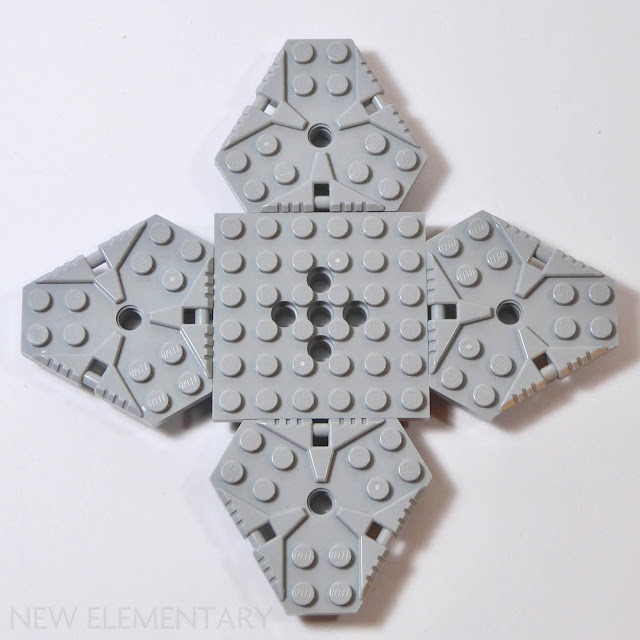 The modified plate is one brick high and shares that dimension with a part I have a real fondness for: the Nexogon - and no, I’m still not done investigating it! 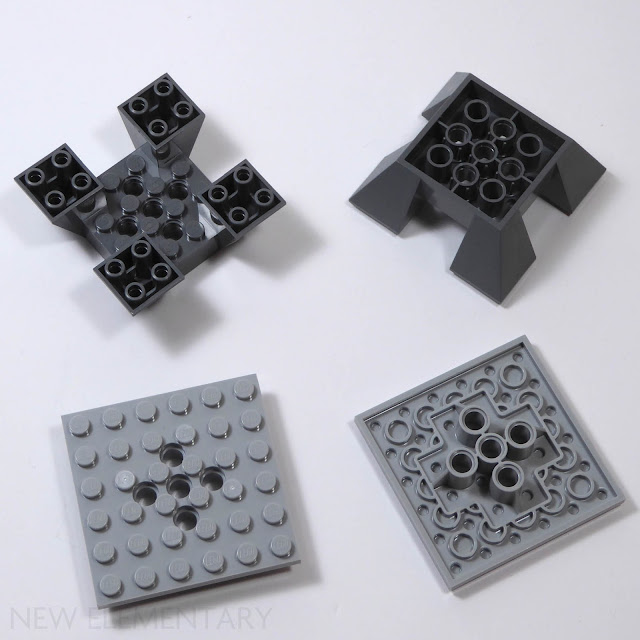 The previous piece designed for the purpose of perpendicularly attaching solar array panels (30373), is a total of two bricks high, so there’s definitely a space saving benefit here. 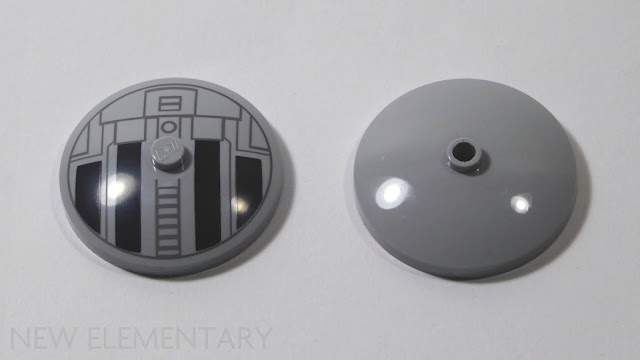 1x Dish 4 x 4 Inverted with Open Stud in Light Bluish Gray (6317090 | 35394) is supplied and again, can be found in just two other sets. This open stud variant was introduced in 2018; the first time I noticed it was in its printed form in 21314 TRON: Legacy and some copies of that set included the original closed stud – I have examples of both. I assumed that this meant that the traditional radar dish 3960 was being superseded, however I have seen the part concurrently available to date. Indeed, in 75300 both parts are included simultaneously.

So, sadly, that’s really just the one part for us to explore from this set. 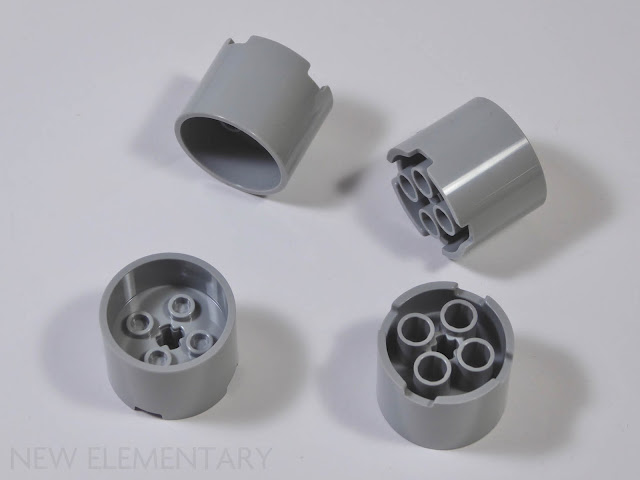 4x Brick Round 3 x 3 x 2 with Recessed Center with 2 x 2 Studs and Axle Hole in Light Bluish Gray (6326483 | 73111) it’s exclusive at the time of writing, although I strongly suspect it will appear in more sets and other colours will follow relatively quickly. It looks a bit like a paint pot, and for ease that’s what I’m going to call it. 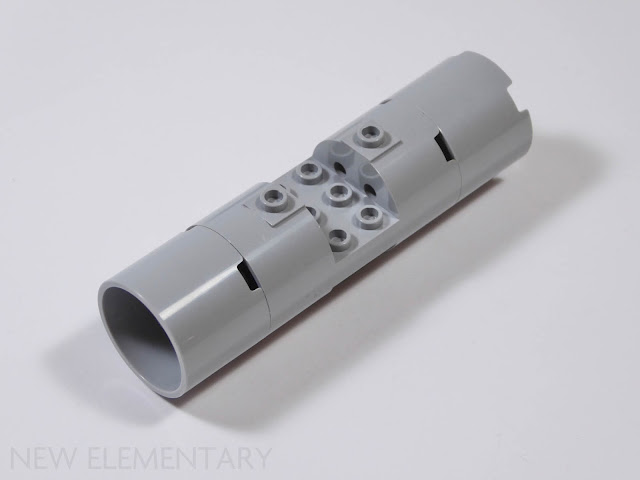 It shares the same diameter as the original 3x3 engines 30360/93168 available on the very first X-wing 7140 from way back in 1999, and to me that really doesn't feel all that long ago, but we have apparently come full circle! 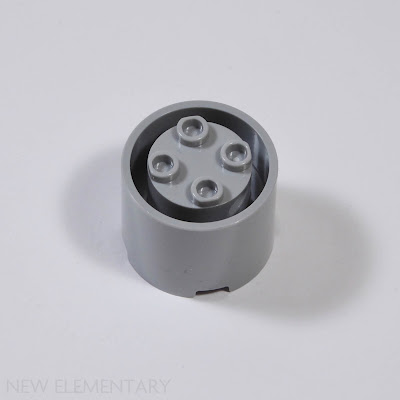 The paint pot is two bricks deep with a one brick deep recess. This is a nice part, definitely a welcome addition to the family of round bricks. In many ways plugging the gap between the 2x2 & 4x4, but doing something more too.

I haven’t used these larger cylinder pieces in the MOCs later in this article but the paint pot fits concentrically with 68325 & 68327 ('Minions Goggles'). 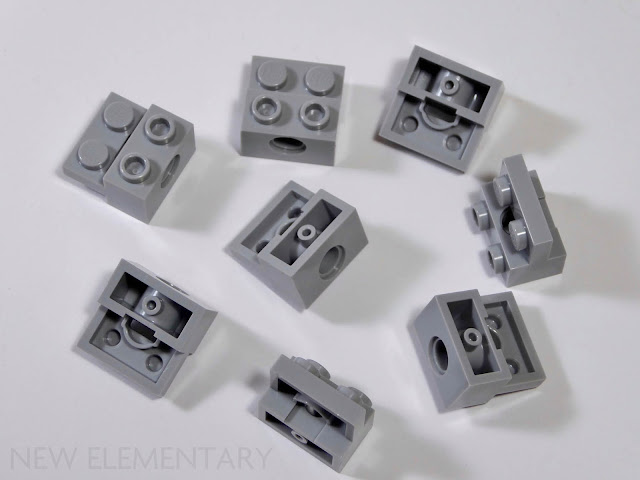 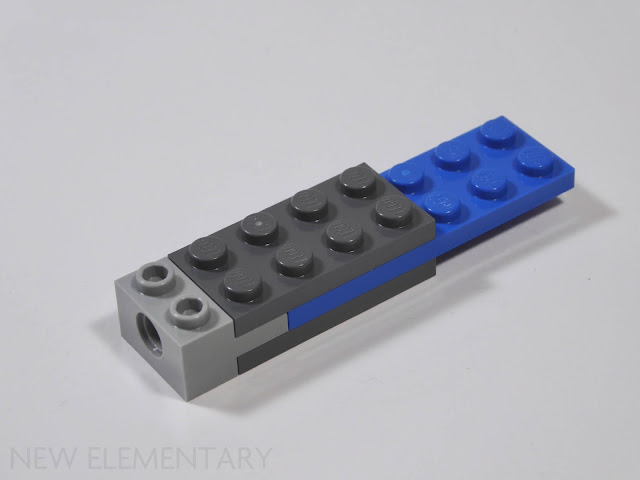 I'm thinking that it is potentially a very useful if not wholly world-altering piece, particularly where edge or wall stability is concerned. 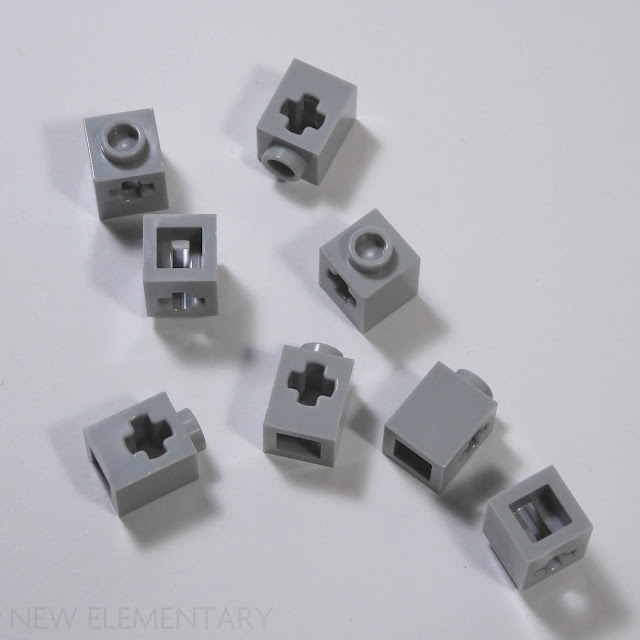 8x Brick 1 x 1 with Axle Hole in Light Bluish Gray (6336539 | 73230) it’s available in six sets from this year and is available in orange in just one other set currently, 21169. I have to say I feared for the durability of this piece but I have been reliably assured that in practise they hold up just fine without cracking along that imaginary horizon. 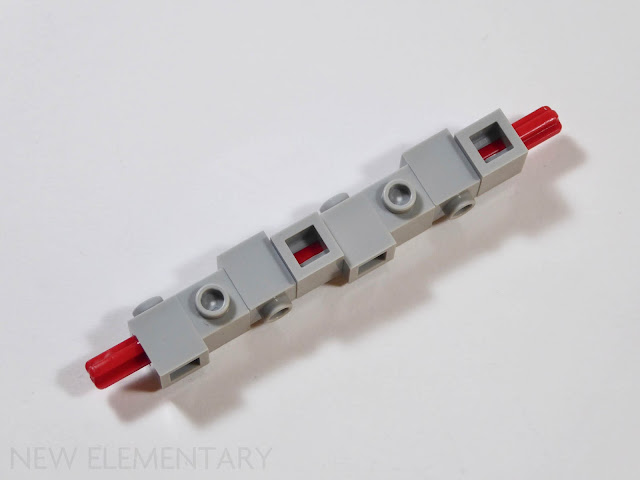 I think it probably offers some fairly interesting opportunities to build off in opposite directions or even 4 directions. In this configuration though, the part is close but does not appear to be precisely flush on all sides. A little wiggling might fix that, but the part seemed like a fairly snug fit to me. To the extent that it would probably deter me from using this technique where alignment in all four directions is absolutely crucial. 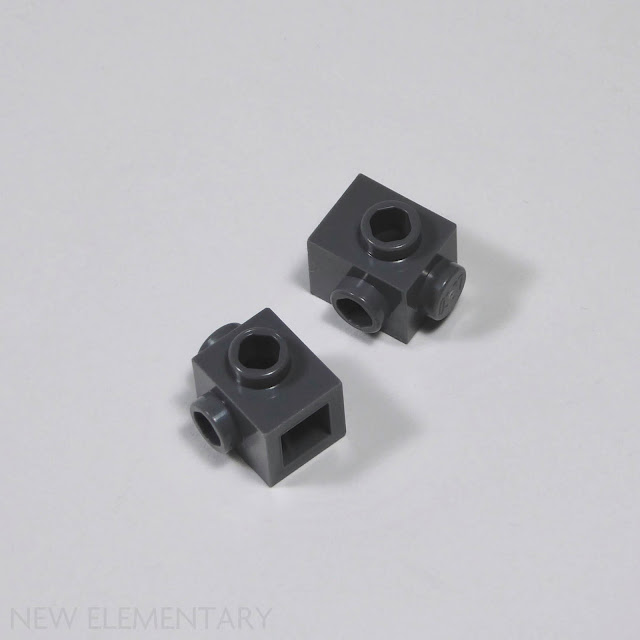 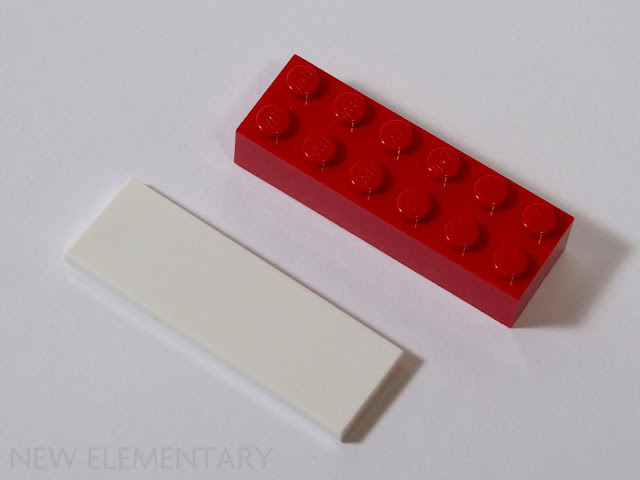 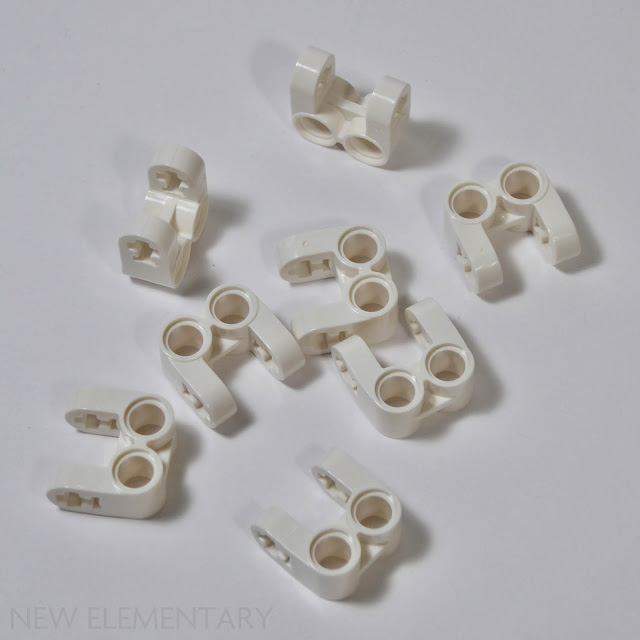 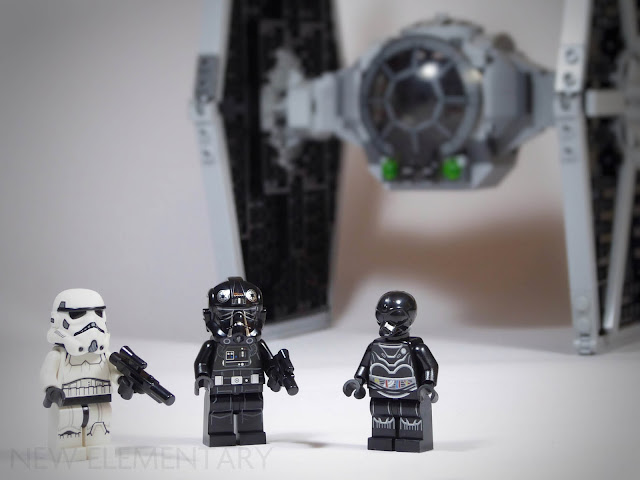 These minifigures are made up from parts that have all been seen before. The Protocol droid is sporting some new updated prints however, and it’s good to see this kind of droid appearing in a more affordable set. There really isn’t much else to report. 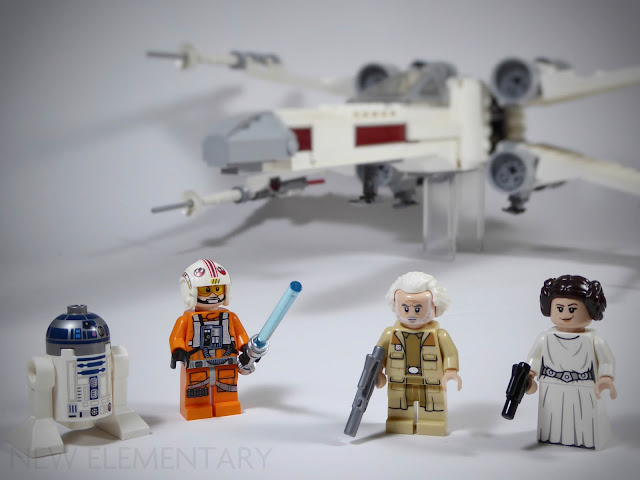 Here are the minifigures for the X-wing… There are some nice new prints here for Luke and particularly General Dodonna. We’ve seen R2 and Leia before though.

Minifig Hair Swept Back with Widow's Peak Chin-Length and Bushy in Back in White (6128875 | 21269) has only been previously available in the BTTF Dimensions Doc Brown Fun Pack set where it wonderfully represented the eccentric inventor’s hair.

These sets have been reported on extensively elsewhere, and my opinion of these sets doesn’t add much to those voiced in other reviews. I think it’s great to have these ships appearing at a much more affordable price point. I didn’t manage to secure one of the last iteration of the X-wing; set 75218 was far too expensive for me as I already have a number of the previous depictions.

I could compare these two models to their many respective previous versions having built a fair number of them, but as with many things, what one hand gives, the other takes away. Compromises have been made, but my feeling is that they are very fair compromises and that if you are looking for an X-wing and/or a TIE fighter for your collection - these really are excellent representations of those ships.

If you’ve read my articles you’ll have noticed my interest in Star Wars, particularly poking fun in a gentle but affectionate way. The first thing I did was to swap the wings of the two models to create a pair of stupid hybrid ships. 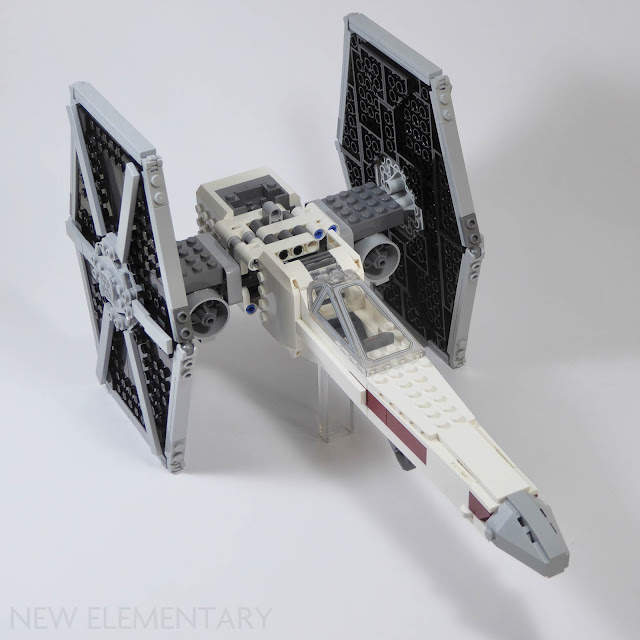 The Tie-wing and H-fighter were born! This amused my son and I ...and then we did a bit of swooshing these silly ships around “REEEEEYAUUUUUGH!” 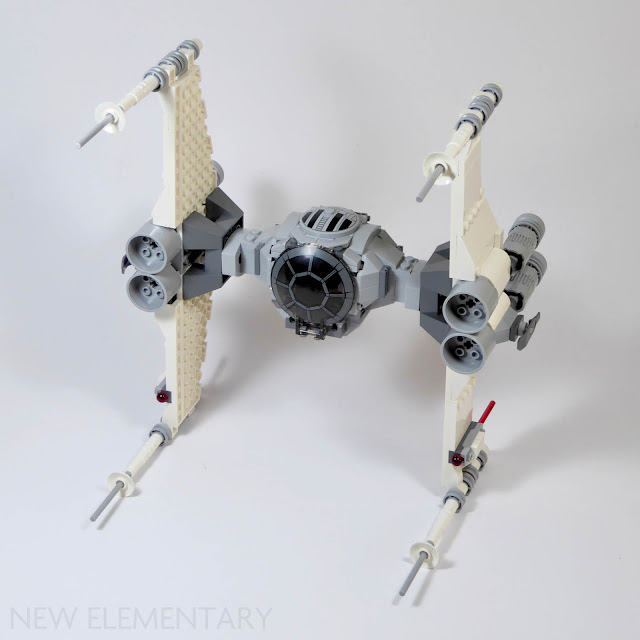 All the subsequent MOCs are alternate builds, using only the parts provided in just the two sets.

My son was helping me take apart the sets and he chose to “unwind” the light bluish grey edge of the TIE’s wings and I just saw long legs... 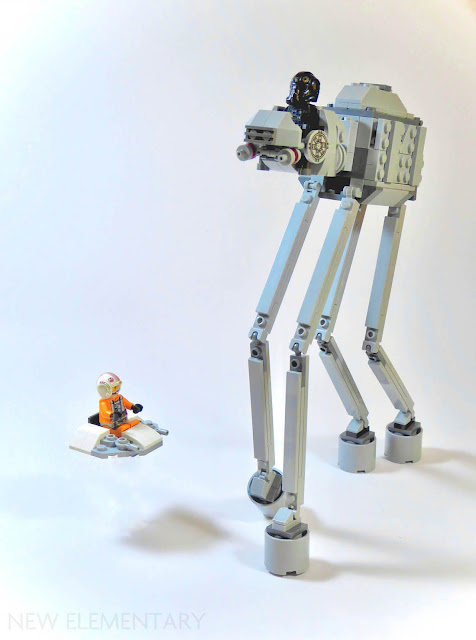 Those long legs made me think of Dali’s “Elephants”, I’m not usually that much of a fan of Dali’s work, I do, however, love a silly-take on a familiar theme. I built a little Snowspeeder from the available parts too to go with it. 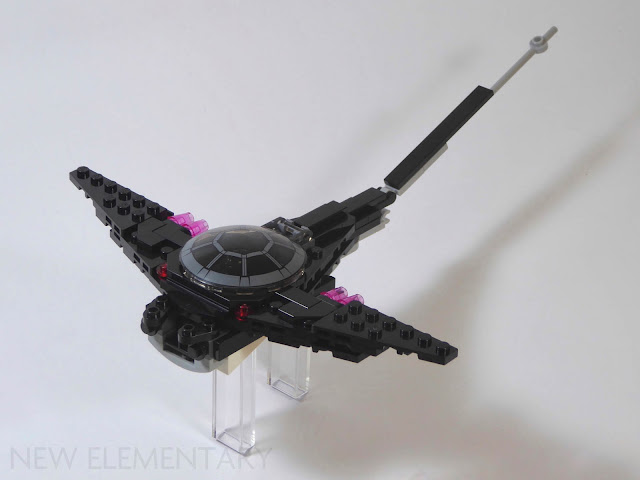 My Manta can also be built at the same time as the Dali AT-AT. 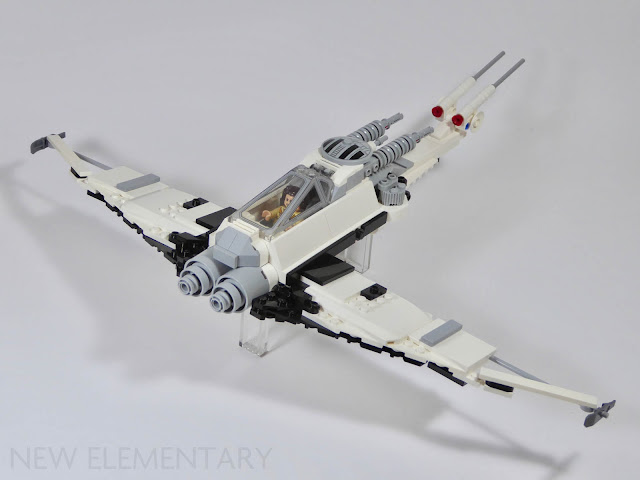 At some point during the rebellion, Princess Leia got a bee in her buns and jumped in this fighter to right some wrongs! I don’t know why it’s called the Albatross. Other than being white with black markings and having a wide wingspan. Also, for the Python fans amongst you - Albatross! 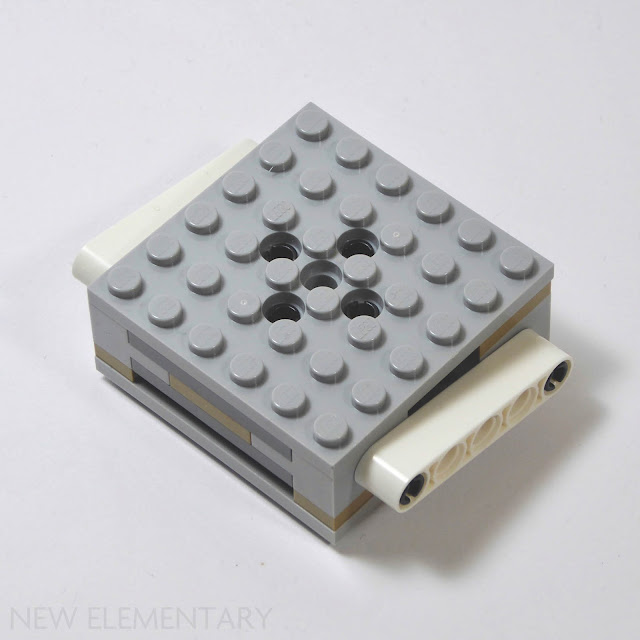 The tipped wings are achieved by using the TIE fighter wing support plates pinned back to back with 4 of those Technic Brick Special 1 x 2 with Pin Hole and 1 x 2 Plate in Light Bluish Gray (6326478 | 73109) sandwiched between. 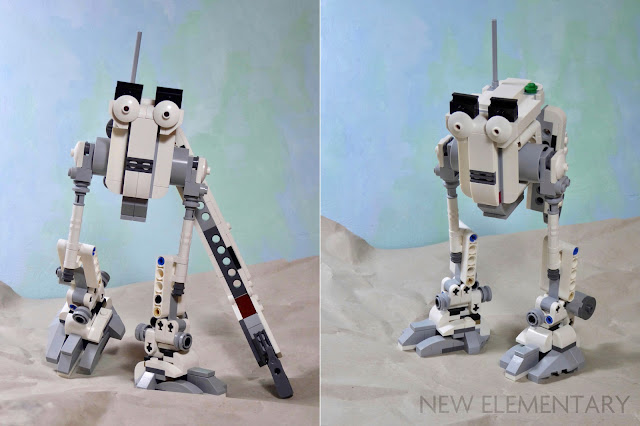 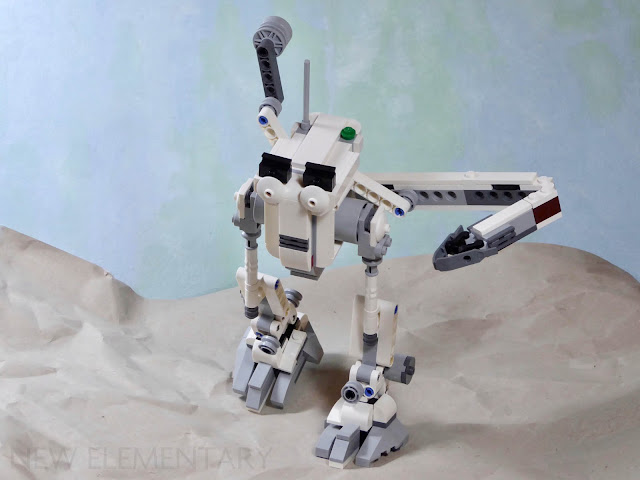 A sort of geophysical surveyor robot. This little character has opened a floodgate of thoughts about other possible autonomous robo-tools that I think may weigh heavy on my mind, and possibly inform upon MOCs I attempt going forward. 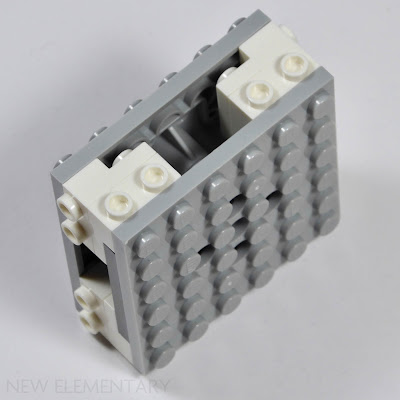 This guy uses a very similar construction method to the Albatross wings above, this time, 2x Plate Special 2 x 2 x 0.667 with Two Studs On Side and Two Raised 6046979 | 99206 are sandwiched back to back on each corner.

This relatively simple construction reminded me of something I had in my LEGO box as a child. An Ipso sweets container… I think they were a UK only thing and I was surprised to find the Wikipedia page as I’ve never seen any mention of them anywhere else online.

And seeing that configuration of studs, I was struck by how much is now possible with simple construction, this robot was the sort of thing I would have loved to be able to do back in the 1980s. 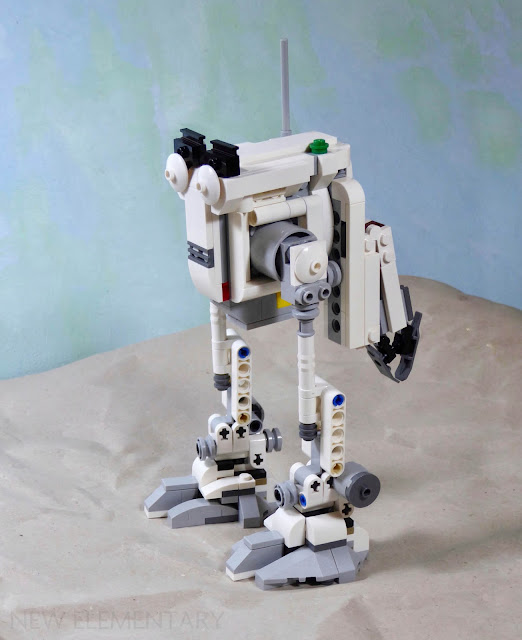 If you’ve enjoyed this article and feel inclined to buy either or both of these sets as a result, please follow our affiliate links to make your purchase, New Elementary may get a commission: UK LEGO Shop | USA LEGO Shop | Australia LEGO Shop, for other countries 'Change Region'.

Posted by: Admin Posted on 6/20/2021 04:39:00 am
Email ThisBlogThis!Share to TwitterShare to FacebookShare to Pinterest
Labels: MOC, Set review, Star Wars