Saija Saarenpää (@saija_kristina) returns with not one but two more LEGO® Friends reviews for you today: the 93-piece 41677 Forest Waterfall and 605-piece 41682 Heartlake City School! Products in this article were provided by LEGO; the author's opinions are their own. 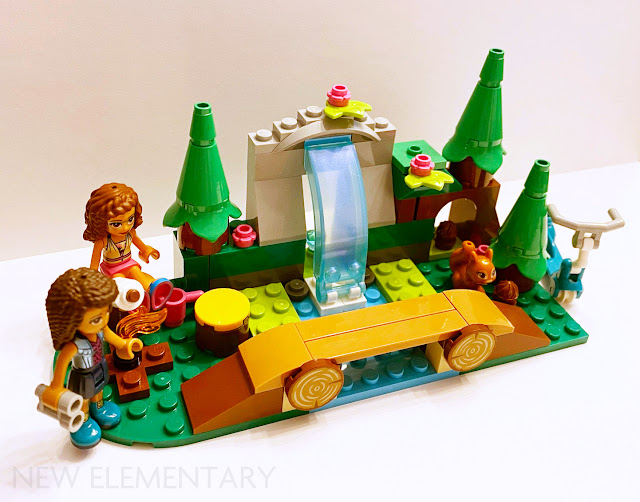 This small forest area beside a waterfall includes a wooden log that bridges both sides of the river where the waterfall lands. Included are two minidolls, a squirrel, and a few basic supplies for camping such as binoculars, a bonbon to roast in a fire, and a mug. There’s also a kick scooter as a means of transportation.

The set comes with a few recolours that are all Bright Green: 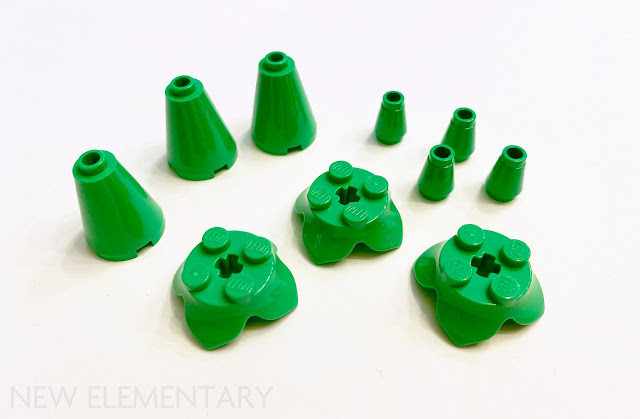 I find the new Leaf Extension plate most interesting, since that part hasn’t been available in any shade of green previously. 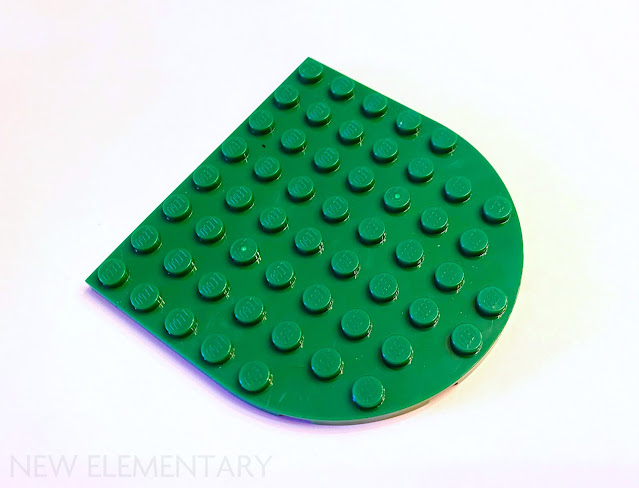 Overall, the set isn’t super-interesting, is cute and quick to build but then it does not cost very much – if buying, consider using our affiliate links (New Elementary may get a commission): available now for £8.99 at the UK LEGO Shop, AU$15.99 at the Australia LEGO Shop, and it will be US$9.99 from 1 August at the USA LEGO Shop.

It does not offer much for an experienced builder but has a few nice parts for MOC usage. I will award Nice Part Usage to the Windscreen 6 x 2 x 2 with Handle in Trans-Light Blue Opal (6290571 | 92474) as a waterfall. Also, the new recolours are more than welcome. Always nice to get more greenery pieces in new shades of green. Those printed tree trunk pieces (6182435) are nice addition, since they are not cheap on the aftermarket. And hey, no stickers at all! 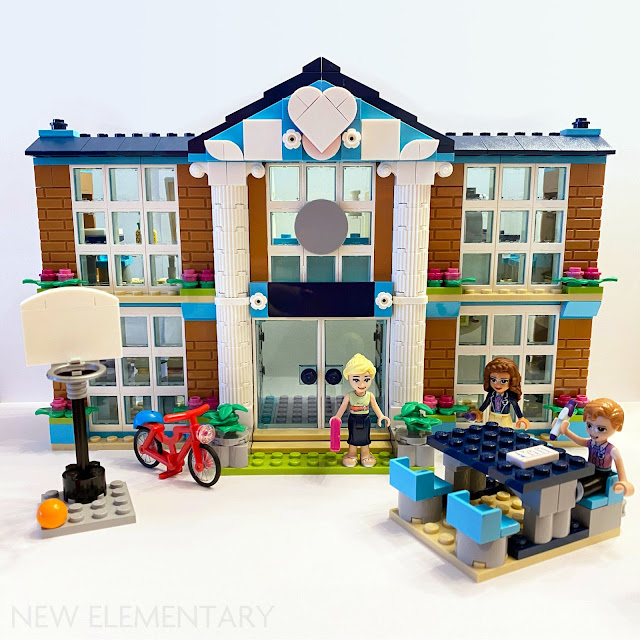 This set offers a nice build overall. It consists of a symmetrical two-story facade with a few classrooms in the backside. There’s also a bunch of outside stuff included like a basketball hoop, bicycle, tables and nice plants as decoration. The set includes three minidolls. 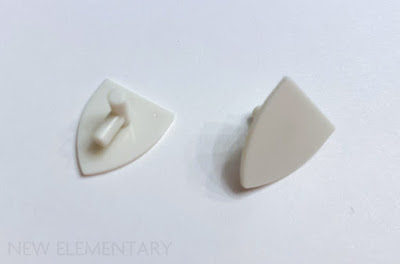 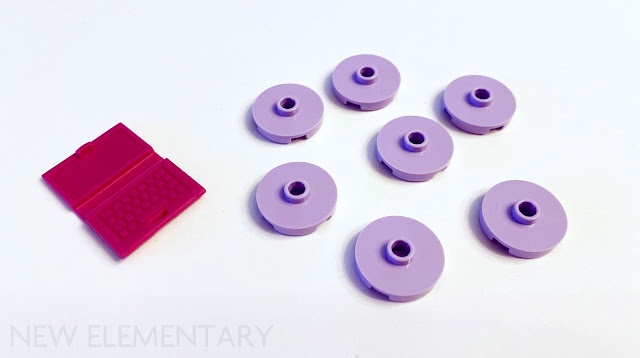 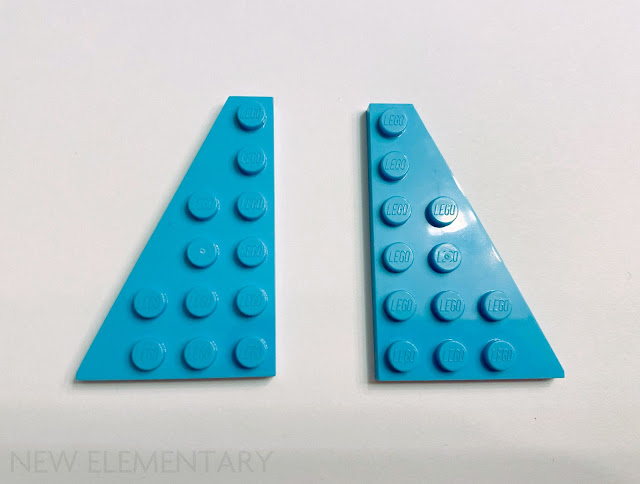 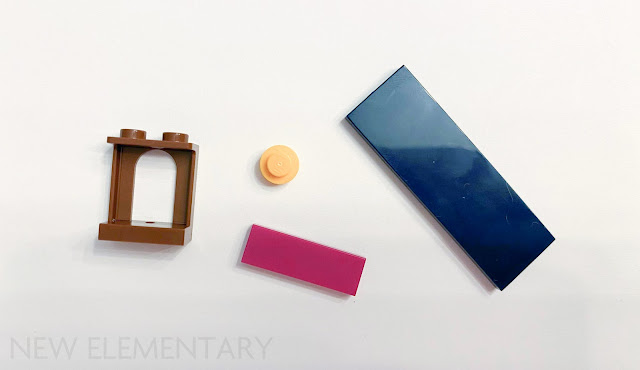 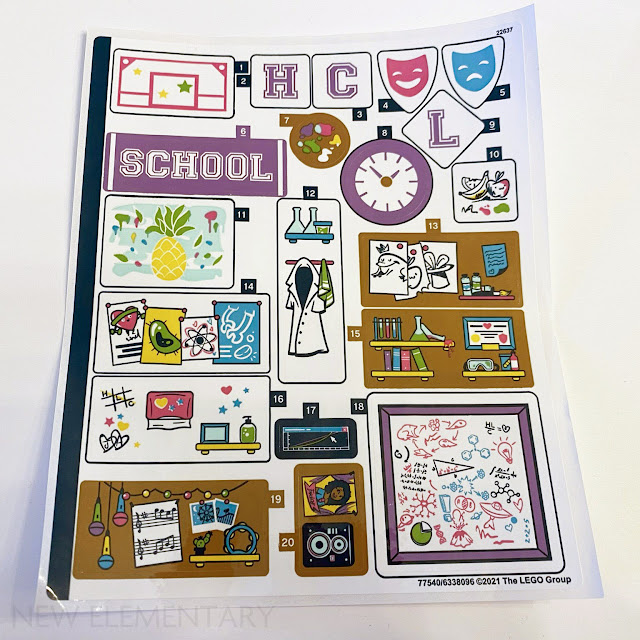 I did not apply the stickers as that would make my pieces less versatile for MOCs, but here’s the sticker sheet for reference. 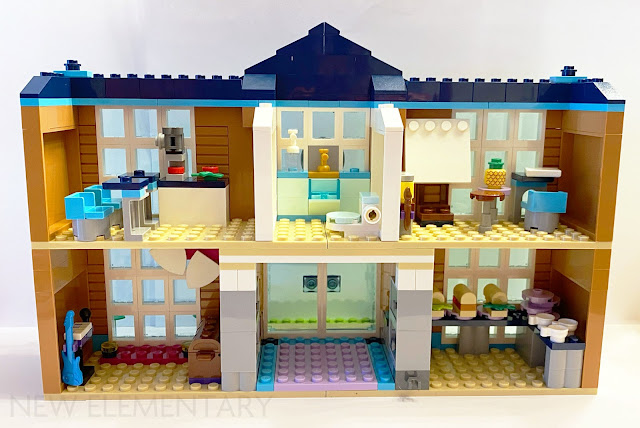 Here’s the school from its rear side. The build is a dollhouse build, as is traditional for the Friends series, to maximize playability. The build as a whole has some repetition due to the nature of a symmetrical building, but the classrooms themself have some nice variety. Let’s take a look at those rooms. 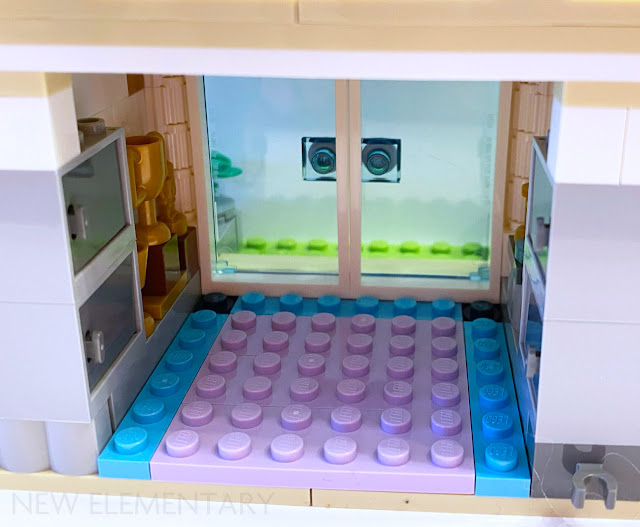 Let’s start with the most boring one, the lobby. It only includes some lockers for pupils and a drinking fountain. There are also a few school trophies on display. I guess it represents a basic school lobby pretty well with its weird colour combination of the floor and the carpet. 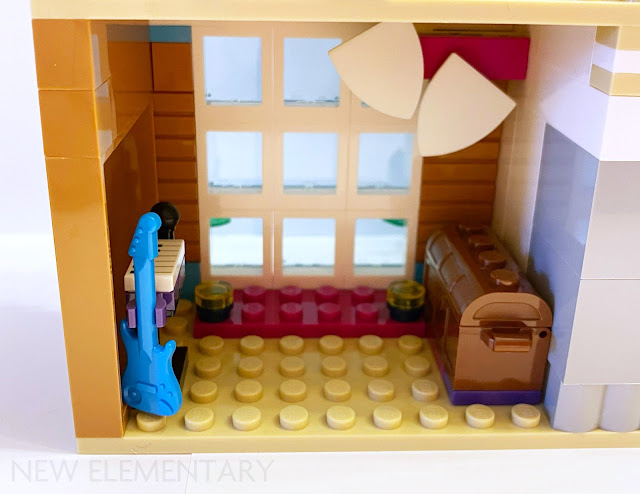 The first class downstairs is a music and theatre class. The electric piano with a mic and a guitar includes a nice printed keyboard part (6293665 | 3069bpr0278). The coffin is filled with a magic wand, a sword, a bowtie and a diamond. The design has a small flaw with the coffin because you cannot open it without detaching it. The decoration is an interesting part of this classroom. On top of the stage, two triangular shield pieces would include stickers #4 and #5 from the sheet. The stickers are slightly smaller than the shields, so the phosphorous colour of the shields will still be visible in the edges of the shields, and will glow in the dark. A nice touch I would say. 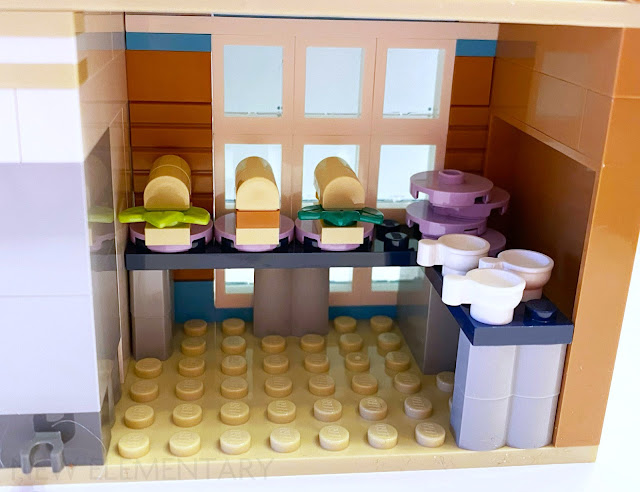 The other room downstairs of this two-storey building is the school cafeteria. It has some juicy-looking sandwiches on display. One of them includes the new Bright Light Orange 1 x 1 round plate as a stuffing. Cheddar, I guess? Also, this room includes almost all of the new Lavender round jumpers as plates. That’s kind of a nice usage for the part, cause you can stack them, and attach food. 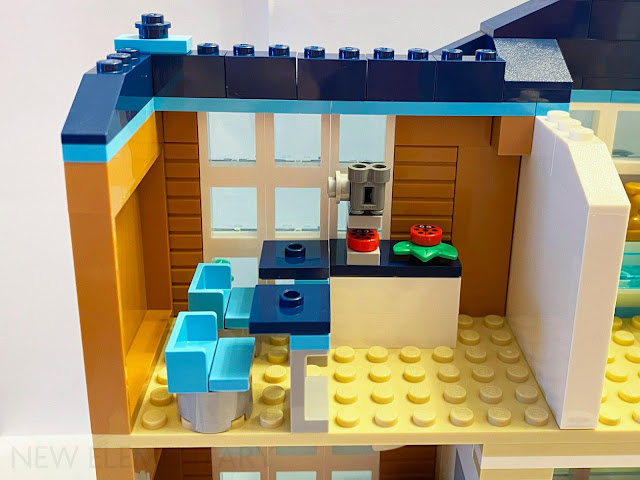 The next class is the first room upstairs. It’s a biology class with two school desks and a table with a microscope. There are two pieces of Ladybird print (6324417 | 98138pr9989) included in the build, and also one as a spare part. They are a new print from this year (2021) and have been included only in three sets before. 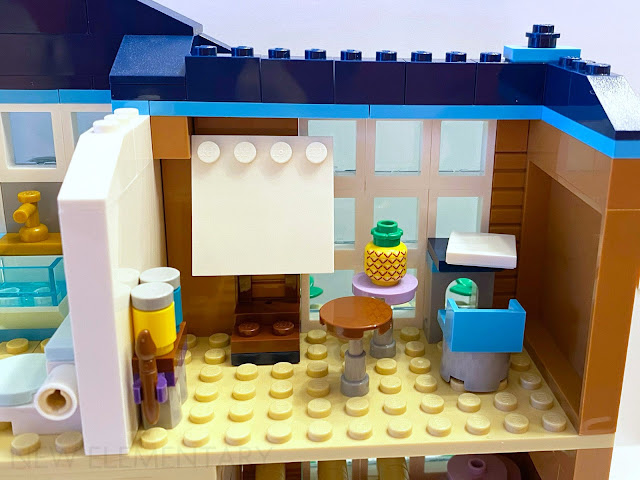 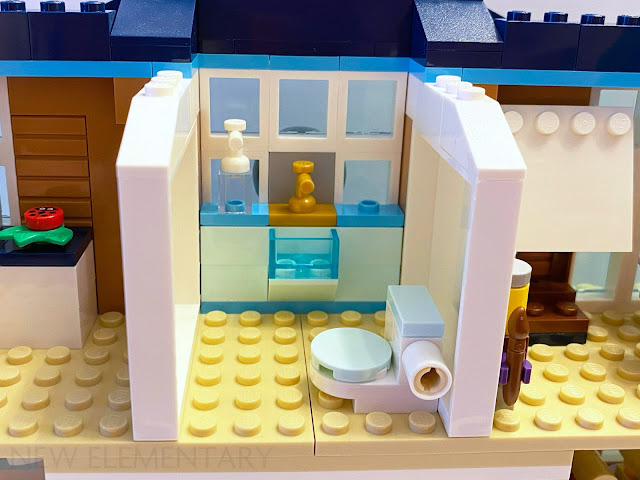 The last, but the not-least needed room upstairs is a toilet. The toilet seat has a nice design with an integrated toilet paper holder. The design of the sink and its surroundings look nice as well. Overall, the room looks almost too clean and modern to be a school bathroom.

The classrooms were interesting to build, and I also enjoyed the outside build with the pillars and white ornamental parts. What I did not enjoy that much was clipping all those window glasses in place, there are so many of them included in the build. Also, aesthetically, the light blue tint in the windows is not my favourite. Nevertheless, there are some nice parts included in the build, including the numerous recolours and prints. Buying this set? Consider using our affiliate links, New Elementary may get a commission: UK LEGO Shop priced £59.99, Australia LEGO Shop priced AU$89.99 and will appear in the USA LEGO Shop from 1 August priced US$54.99. Europe: visit UK and 'Change region'.

Posted by: Admin Posted on 6/28/2021 04:10:00 am
Email ThisBlogThis!Share to TwitterShare to FacebookShare to Pinterest
Labels: Friends, Set review