We go back underwater today to look at another of the 2020 LEGO® City sets that ventured into the deep, to search for mysterious aquatic monsters and the crystals that inevitably seem to scatter the seafloor in the LEGO universe. 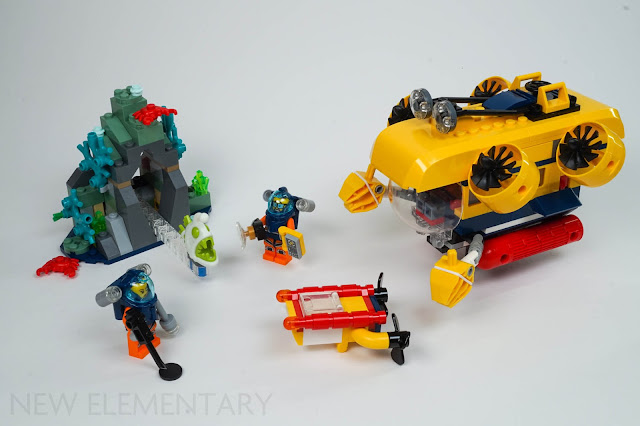 The 286 pieces in 60264 Ocean Exploration Submarine make a realistic looking deep sea submarine, the rocky home of an anglerfish, a research drone and some well-kitted-out divers led by Jessica Sharpe. 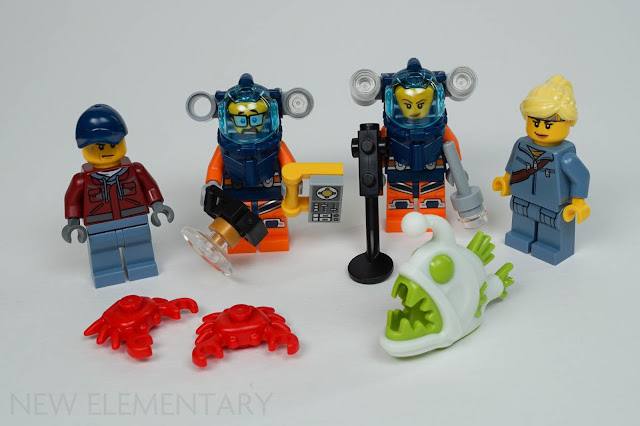 Well-kitted-out they may be but disappointingly there is not a flipper to be found in this set! Perhaps the National Geographic Explorers this set was developed with advised that at extreme depths they are not so useful.

One thing this 2020 wave of five sets has given us is a great selection of new or updated aquatic creatures. And the real character star of this set is of course the exclusive anglerfish in its full glow-in-the-dark glory. 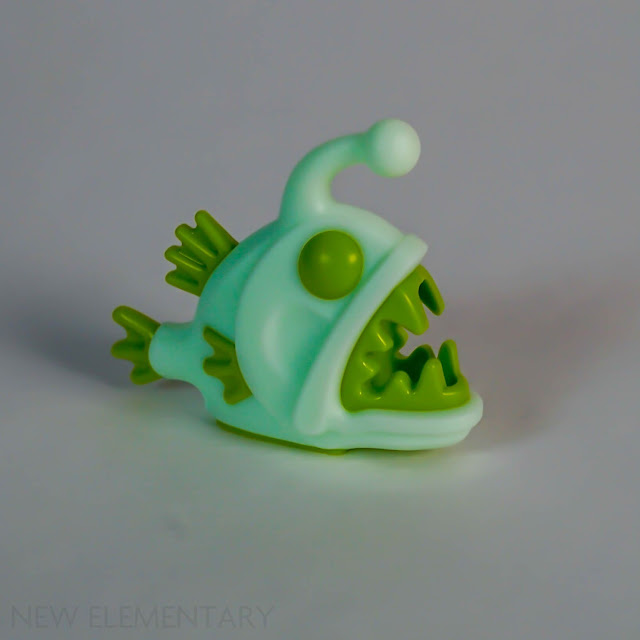 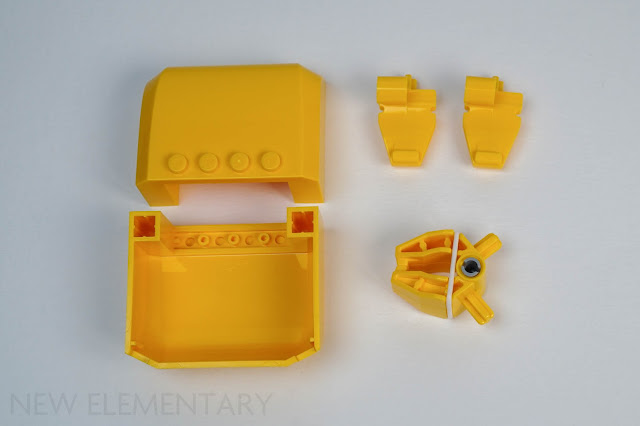 Of the two exclusive colours in the set, the first pictured here is classified by Rebrickable and BrickLink as a windscreen and yet it seems to have only ever appeared in a transparent colour once since it first appeared in 2008, when it was Transparent Blue/ Trans-Dark Blue in 2010’s 5985 Space Police Central. Here, you get two Windscreen 5 x 6 x 2 Curved Top Canopy with 4 Studs in Bright Yellow/ Yellow (6306879 | 61484). 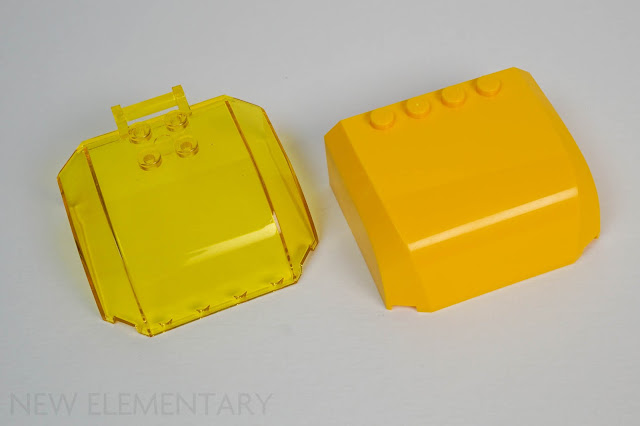 This part initially appears similar to Windscreen 5 x 6 x 2 Curved Top Canopy with 4 Studs and Handle (92580), a part that only ever appeared in one set: 7984 Deep Sea Raider from 2011. (Being trans-yellow, this rare piece has proved very popular with Spacers.) 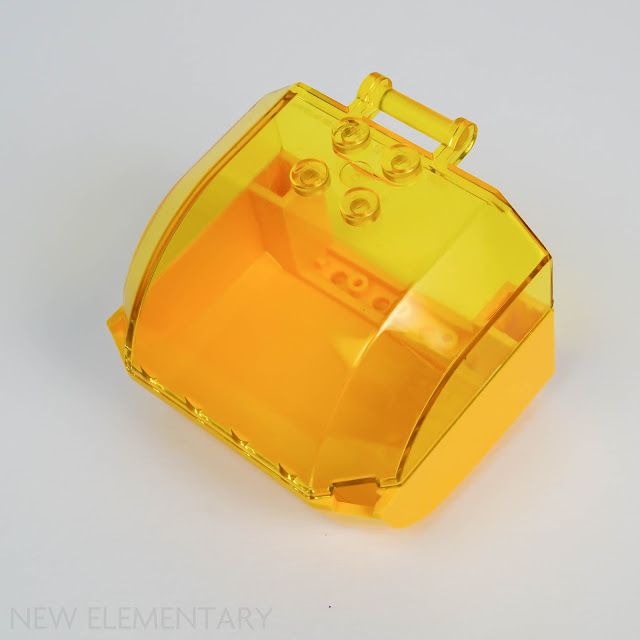 Although the overall dimensions are the same - 5 x 6 x 2 - they do not quite match up when placed back to back as the 45 degree sloping sections are different sizes.

Secondly, the grabbing hands of the submarine are each composed of a pair of parts - Grab Claw with Axle in Yellow (6307842 | 49700)– and they can also be found in Bright Orange/ Orange in four of the 2019 City Space range of sets. Each pair of claws is connected with a frictionless pin and uses an elastic band to provide grip and spring. For MOCing or display purposes a friction pin could be used instead, without the elastic band, to allow them to be angled as you wish.

This part has potential to be used as something other than a claw grip; the shape is interesting and unique. One problem this piece does pose is that it is not symmetrical and no mirror piece is available such as you see with a left and right wedge plates, for example. This problem is not insurmountable though: the judicious use of a couple of yellow Technic half-bushes is one idea to balance things out.

Let us know in the comments if my tablescraps give you any inspiration to use them in new and unusual ways.

There are also a few comparatively rare parts in the set I felt worthy of note. 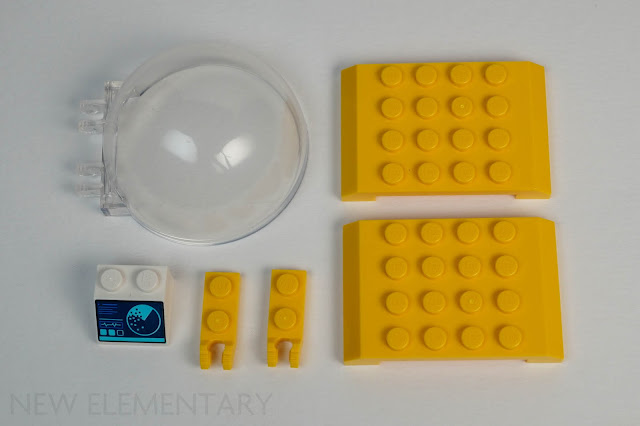 Note that the 6 x 6 dome and the hinge plate make the list because they are the new 7-tooth versions (the old versions had 9 teeth). Thomas Jenkins described these in his article of Mos Eisley MOCs and there are also astute comments from readers at the bottom of that post. 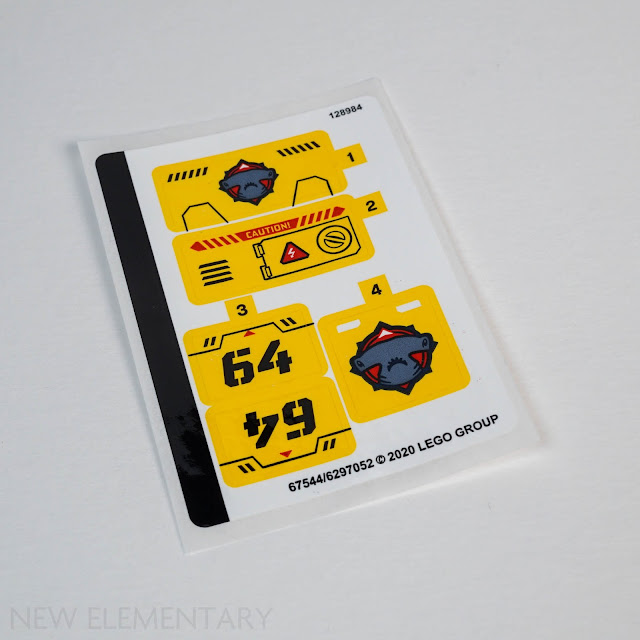 The set contains 5 stickers should you wish to decorate your submarine. Interestingly they feature a hammerhead shark design, an animal which does not appear in this set but in 60263 Ocean Mini-Submarine which I recently reviewed.

The build is fairly straightforward, which is to be expected for the set's target audience. The anglerfish lives in a little cave that is pretty much built by stacking bricks surrounded by teal coral, crabs and a transparent bright green crystals.

It is attached to a clear Technic beam so it can be made to shoot out, to frighten any unsuspecting researchers. 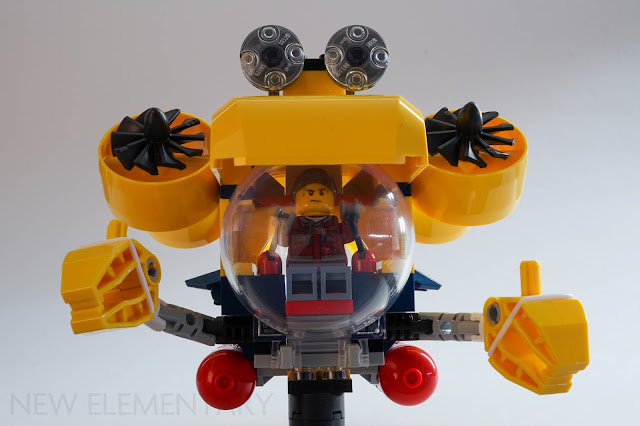 The submarine features a removable top for easy access but the most interesting connection is how the remote drone docks with the back of the sub. The drone has two open click hinges on the bottom which slot into a pair of 3.18mm diameter clips. It holds firmly thanks to little 3.18mm dimples on the inside of the click hinges but the attachment is not as hard to separate as it would be if a plate with a bar were used – and so makes the play experience more fun. 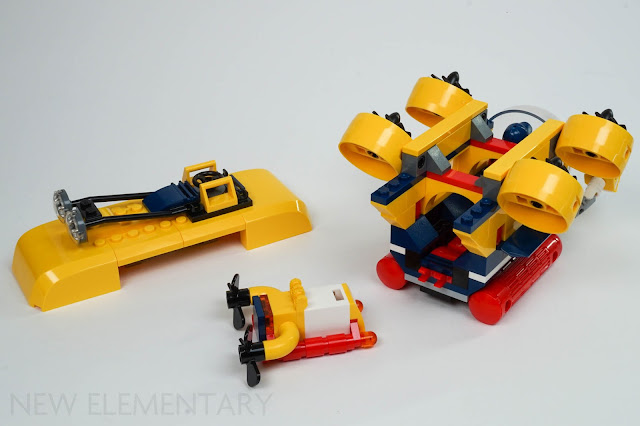 At £24.99 / $39.99 / 29.99€ this is a good value-for-money set that allows for fun and varied roleplay and the submarine benefits from a realistic appearance and lots of nice functions. Better still it has popped up with a discount a few times and is likely to do so again before it disappears. Consider checking and using our affiliate links for UK Amazon or USA Amazon, New Elementary may get a commission. Buy it for the anglerfish and the dome windscreen, then stay for the sub with its grabbing claws!

Posted by: Admin Posted on 3/03/2021 06:13:00 am
Email ThisBlogThis!Share to TwitterShare to FacebookShare to Pinterest
Labels: City, Set review