Our coverage of LEGO® Monkie Kid continues today with Inthert taking on 80010 Demon Bull King; examining its exclusive and rare parts as well as what interest lies in the build. The products in this article were provided for free by LEGO; the author's opinions are not biased by this. 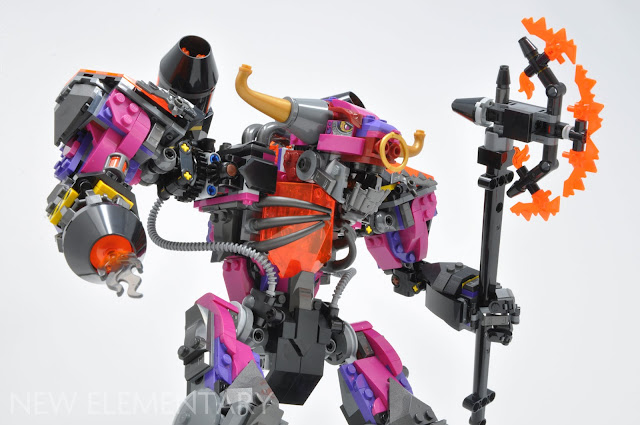 Given the fiery nature of the Bull King, it follows that we see elements appear in Transparent Fluorescent Reddish Orange/ Trans-Neon Orange for the first time (a great colour, but one I found annoyingly difficult to photograph): 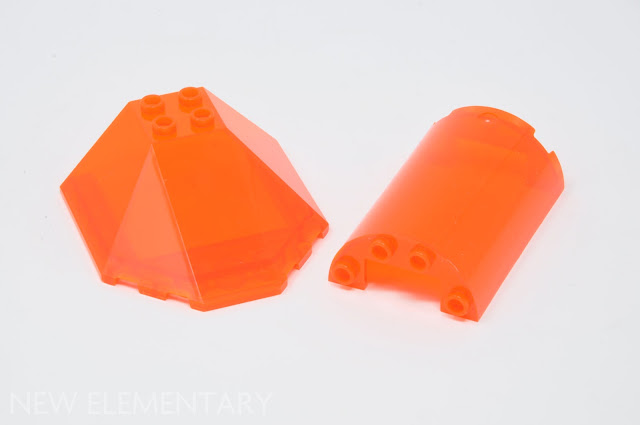 No doubt Ice Planet 2002 fans will get some use out of them! 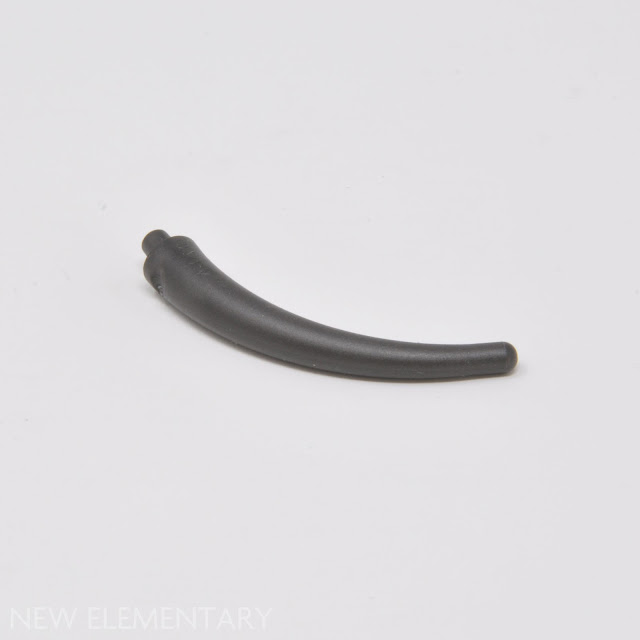 I was surprised to find it hasn’t appeared before now but Animal Body Part End Section in Titanium Metallic (6287506 | 40379)  is indeed new in this colour and there are 6 provided. 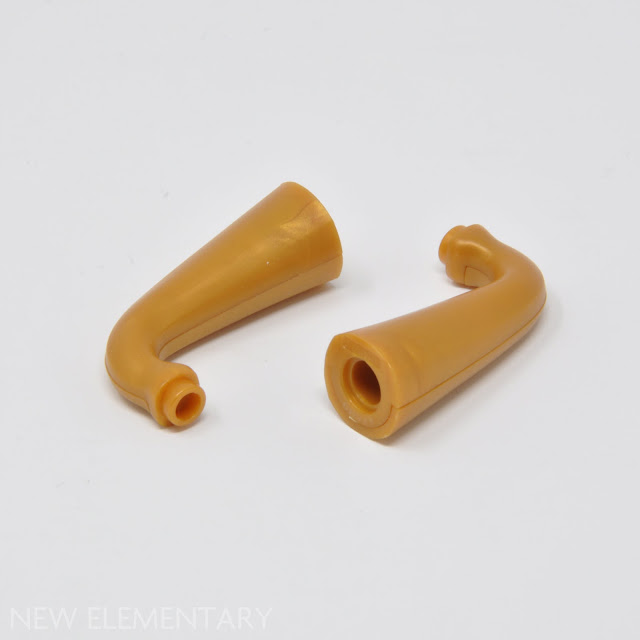 Most noteworthy of all, however, is the presence of 2x Animal Body Part, Horn / Mammoth Trunk in Warm Gold (6286098 | 37297). I was convinced this was a brand-new mould until Jonas Kramm burst my bubble and pointed out this is in fact just a recoloured mammoth trunk from the 2018 set 60195 Arctic Mobile Exploration Base! Despite my disappointment, it’s always great to see special elements crop up again.

While not unique to the set, there are some rarities of the Bright Reddish Violet/ Magenta variety worth a mention: 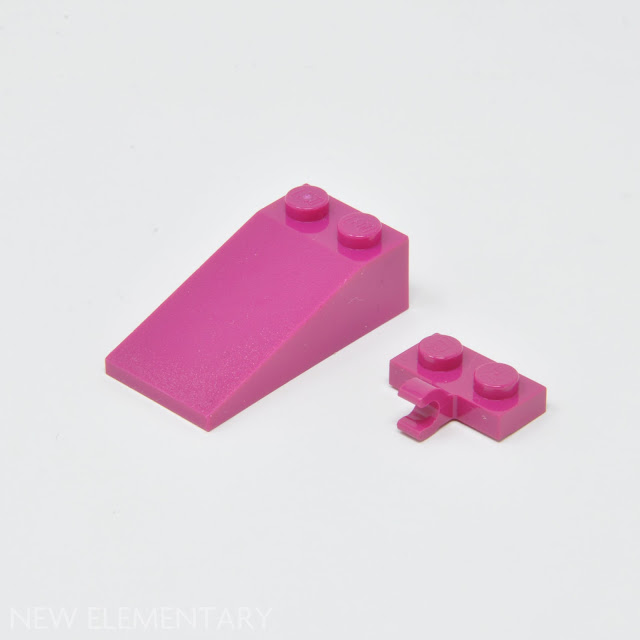 Moving (or should that be ‘mooving’?) onto prints, there are 2 unique ones to be found which depict the Bull King’s rather intense eyes – no doubt outraged by my terrible pun. 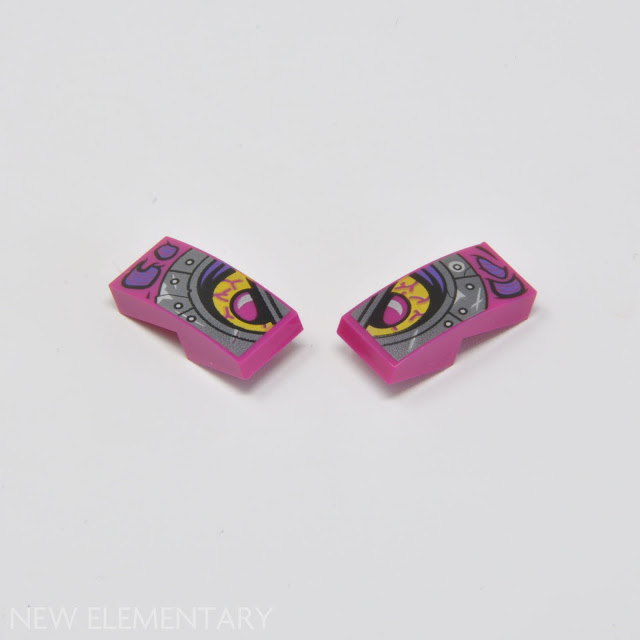 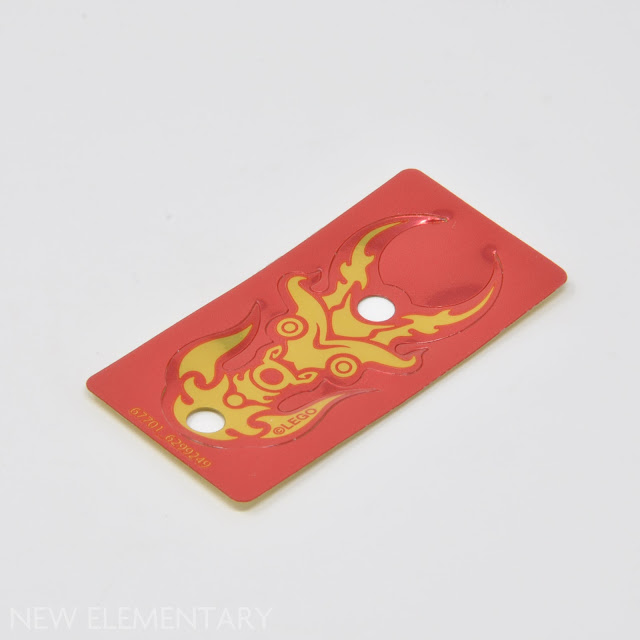 One final ‘part’ to mention is the small flame-shaped foil cut out which adorns Princess Iron Fan’s golden staff.

The instructions get straight to the point as we begin construction with the head of this fearsome beast. 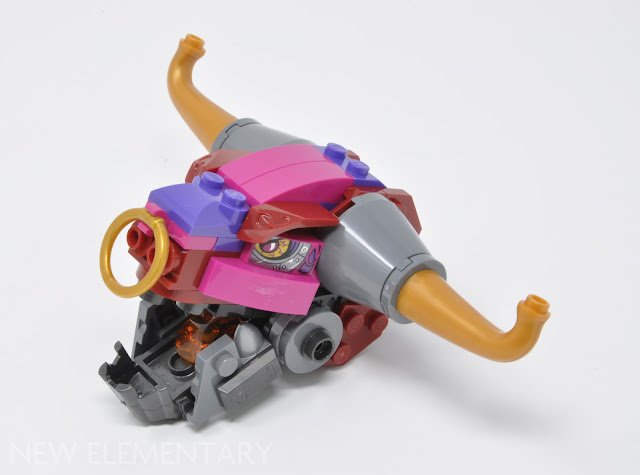 There are some nifty parts usages to spot on the completed head. Most prominent are the two Mammoth trunks we discussed earlier. Yet again we see the new-for-2020 Weapon Chakram / Hoop Blade in Pearl Gold (6286094 | 35485) as a nose ring. And finally, The LEGO Movie’s Metalbeard would be turning in his watery grave if he saw his beard – Plate Special 2 x 2 with Curved Minifig Head Holder in Pearl Dark Gray (6207932 | 15440) – in use as the lower jaw of a Demon Bull King. I suppose only a Demon Shark King would be worse! 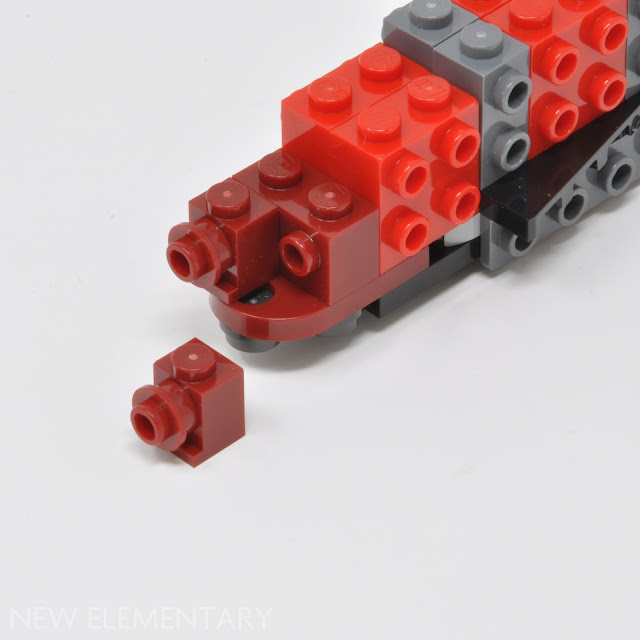 A variety of SNOT bricks are utilised for the head’s core but it’s the technique used to attach the nostrils that caught my eye. While it's common knowledge that headlight bricks (4070) have a square hole capable of accepting a stud on their reverse, I rarely see this used in sets. Though admittedly, I don’t study every single set’s build so this connection may be more widely used than I realise. 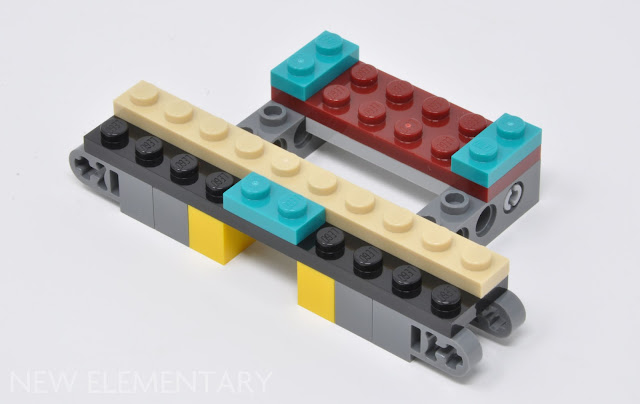 Even the infrequent set buyer can’t fail to notice the frequent use of teal (Bright Bluish Green/ Dark Turquoise) as a filler brick colour though. Its first appearance in this set comes as we make a start on the main body. Nice to see this great colour creep into more and more sets. 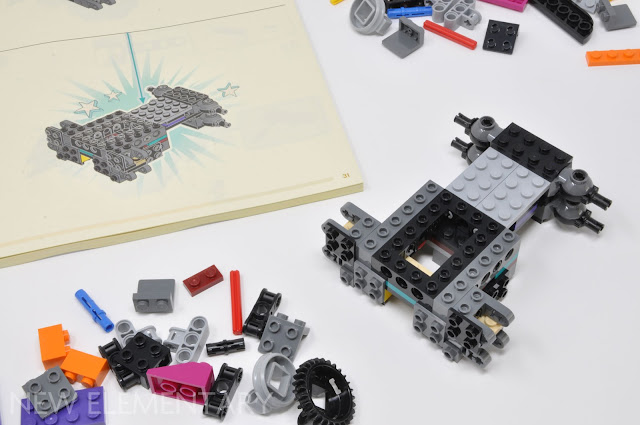 As Tim Goddard pointed out in his review of 80009 Pigsy’s Food Truck, the instructions for the whole Monkie Kid theme have some playful additions that only add to the joy of building the sets. My favourite is the little blue explosion & accompanying stars that indicate a completed section. Even the most benign subassembly steps like this one get the delightful ‘ta-da!’ treatment. 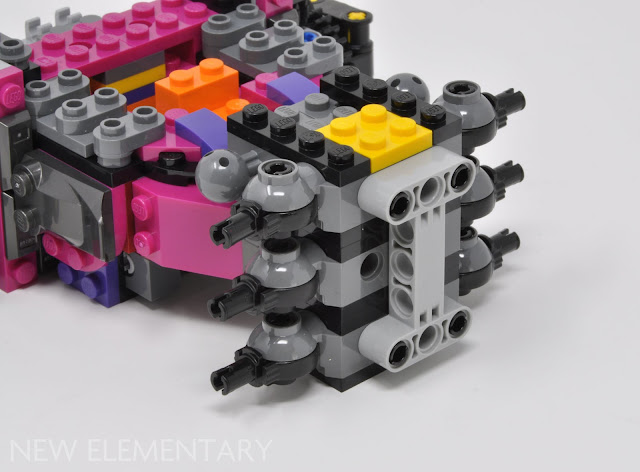 As is expected for all the larger mech sets, the sturdiest of build techniques are used throughout, with brackets and Technic construction doing much of the leg work. Well... hip work in this case! 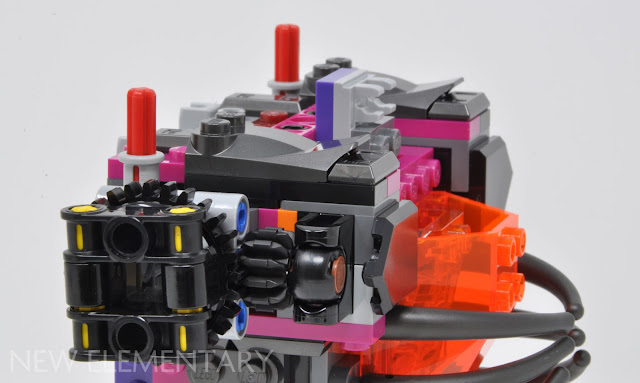 A neat little parts combo is built up at the top of the torso. The lip on the Wedge Curved 2 x 3 x 2/3 Two Studs, Wing End (47456) satisfyingly skirts the chamfered edge of the Gold Ingot (99563) – always nice to see how older part moulds can interact with new ones, and vice-versa. Also note the method used to maintain friction in the arms is similar to that used on a few mech-based sets but most recently the 80012 Monkey King Warrior Mech (reviewed by Jonas Kramm). Perhaps our Monkie Kid heroes and villains are more alike than they care to admit. 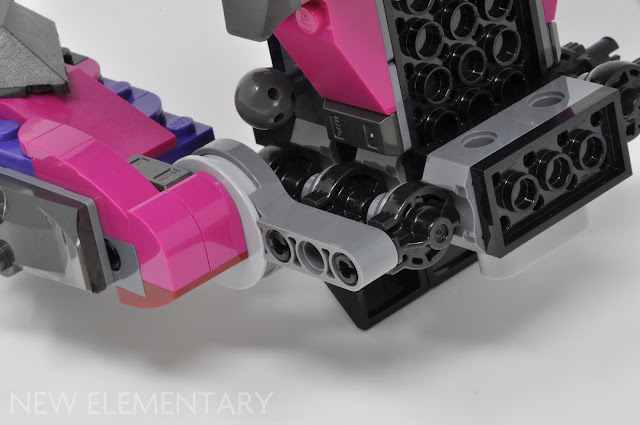 Affixing the legs to the hip joint was a far more ‘musical’ affair than expected. The intense fiction of the snap hinge’s Technic pins caused a rather horrible squeaking noise. Not quite nails on a chalkboard but hardly the noise you want LEGO bricks to make - especially as the instructions say it’s another ‘ta-da!’ moment! 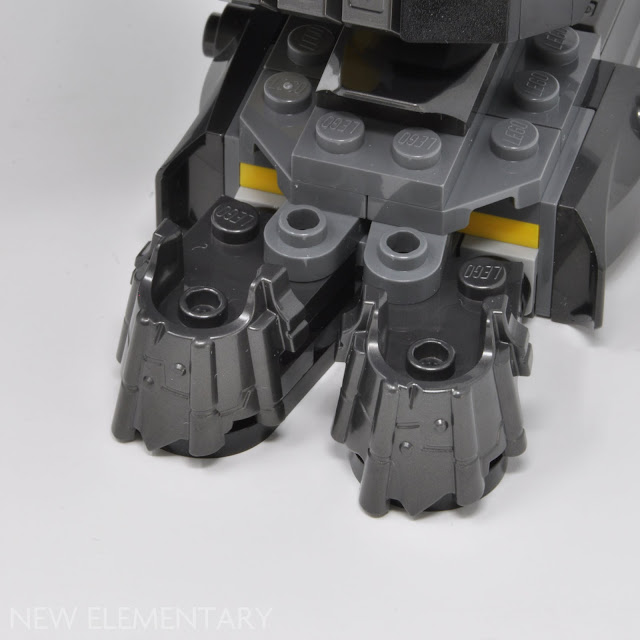 Far below the tuneful hip joints we find the hoofs. Now we discover Metalbeard’s suffering was not limited to the beast’s jaw! You’ll notice the 2 claws are set at a subtle angle; this was achieved by integrating several 1x2 plates with rounded edges (35480) into the structure and taking advantage of the limited range of motion possible as a result.

We’re not usually too hot on minifigures here at New Elementary but the Monkie Kid line exhibits some truly exceptional figure design work so before we cover the completed build, I wanted to have a closer look. 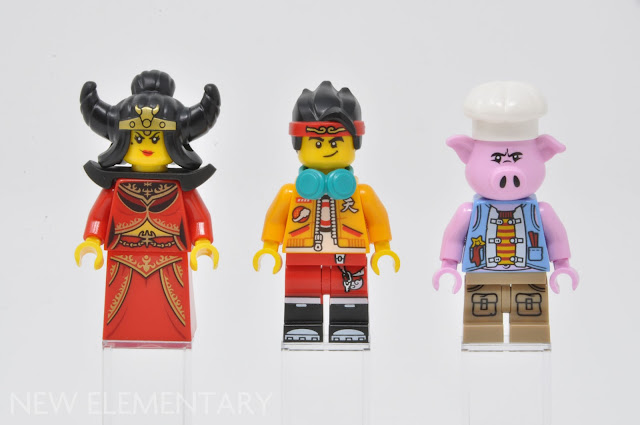 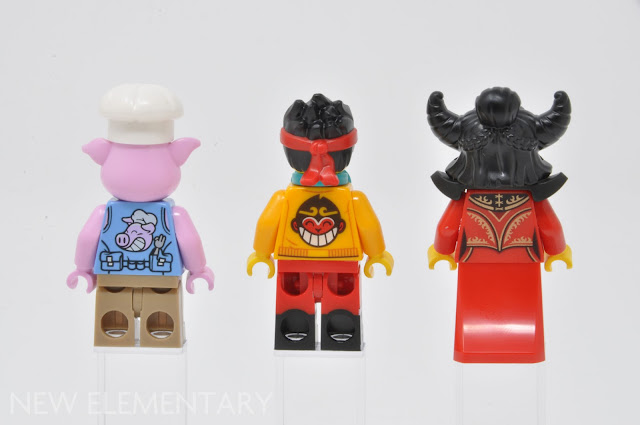 Our heroes Monkie Kid and Pigsy have their work cut out because not only must they fend off the giant Demon bull king but the Princess Iron Fan too! All three minifigures included are nicely detailed with an exclusive printed headpiece for the princess; Minifig Hair with Bun, 2 Horns, Golden Tiara in Black (6305795 | 68540). Monkie Kid is sporting the new-for-2020 headphones around his neck; Neckware Accessorize Headphones in Dark Turquoise (6296942 | 66913) and he has dual-moulded legs with side printing. Meanwhile, Pigsy is one of the first minifigures to have printed medium-size legs. 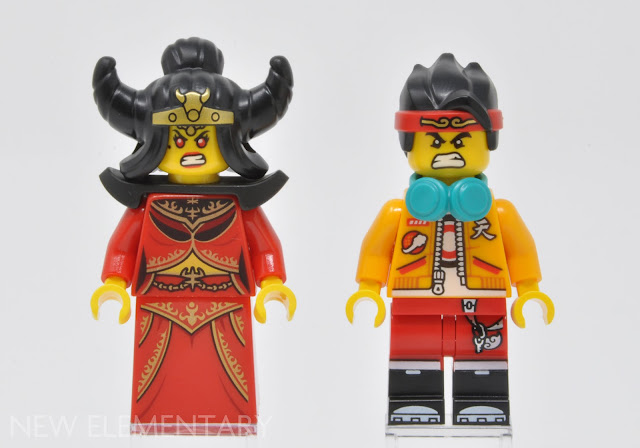 The Princess and Monkie Kid get some appropriate alternate faces too. 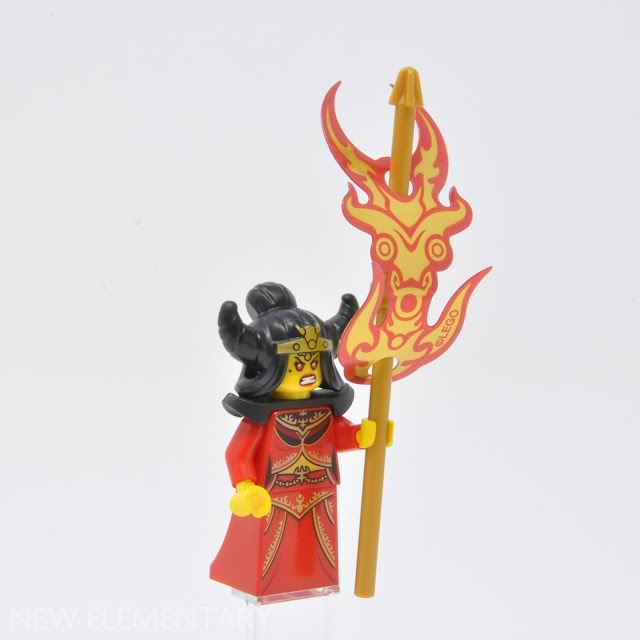 Princess Iron Fan’s staff, complete with foil cut-out, only reinforces her intimidating demeanour. It’s a shame the LEGO logo is rather prominent on the design though. 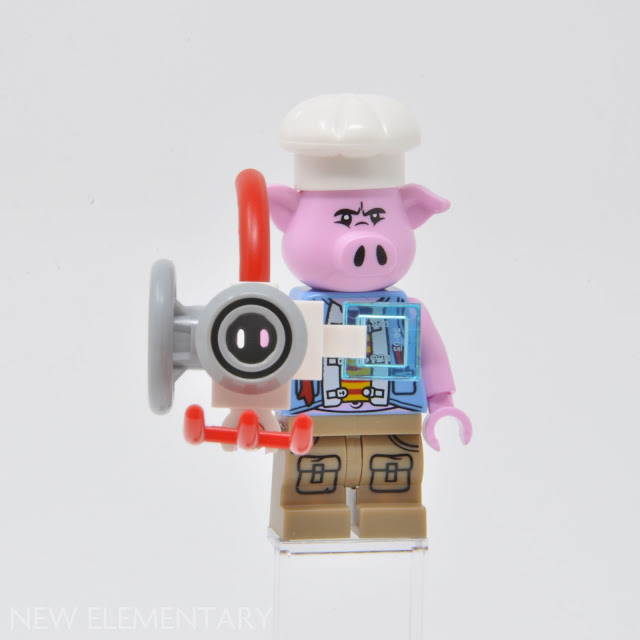 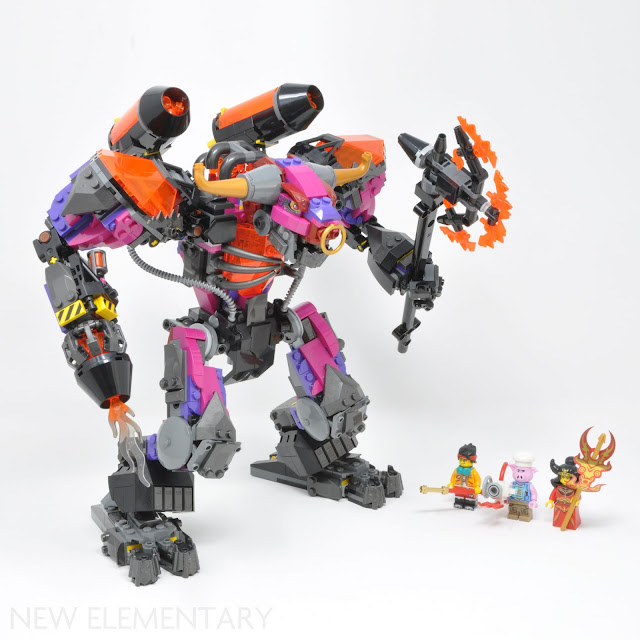 Returning now to the set’s namesake, the finished model stands at an impressive height compared to the minifigures. Although lacking in moveable knee joints and unable to stand in any especially convincing walking pose, the King does have a respectable range of motion. The arms have the best deal since they aren’t load bearing and therefore have more joints. However, I do believe the hefty geared shoulders offer a tad too much friction as I find myself applying quite a bit of twisting force before they budge. Though perhaps the designer was thinking of the model’s longevity since it’s likely the joint would loosen a little over time. 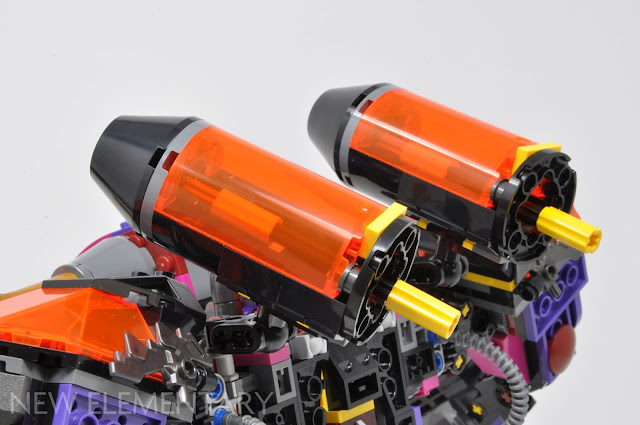 Dedicated play features consist of: a rotating flame thrower arm; a shoulder mounted… not stud shooters exactly but rather analogue stud launchers; and a red light brick that illuminates the beast’s chest area. I regret to say I neglected to take a photo of this in action… would you believe me if I said I was too busy running away from the terrifying sight of a giant minotaur with a glowing chest? 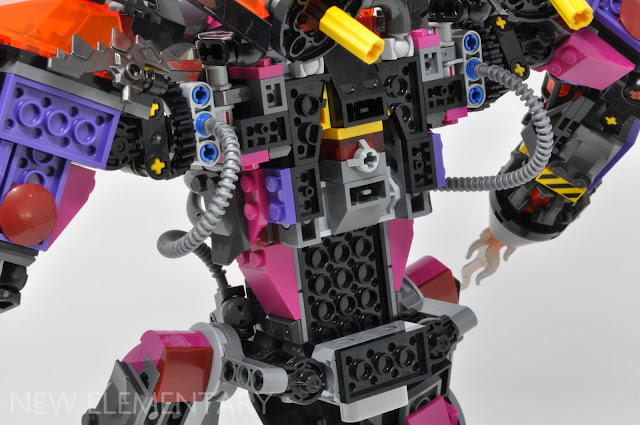 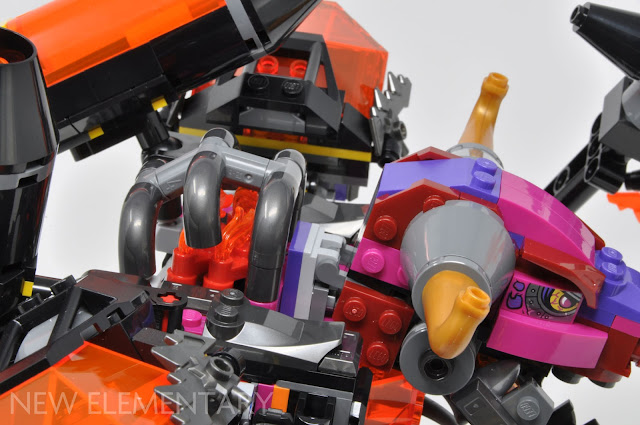 Unlike the Monkey King Warrior Mech, the Demon Bull King does not have the advantage of fabric or shaped foil sheets to cover up unsightly areas of the build. Indeed, aside from the nicely detailed upper spine and neck, the reverse side of the beast feels rather unfinished, as if a number of inverted slopes are missing from the model. 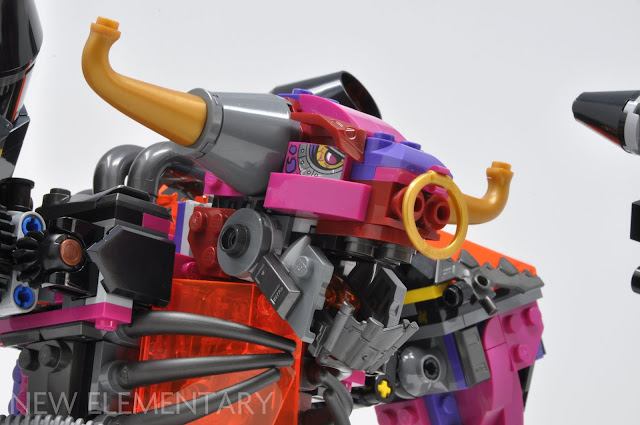 The colour balancing on the model is really well done. The vibrant spots of purples, pinks and of course trans-neon orange are kept in check with a generous amount of greys and black. Better still, since the King is half machine, any abnormal spots of colour can simply be explained away as non-fleshy mechanical elements. For instance, the hints of yellow don’t bother me as the model makes a point of using the colour on the flamethrower with the prominent yellow and black chevrons.

For play purposes, the Demon Bull King has a good amount to offer with its light-up brick, stud launchers and articulation. Though dare I say it’s perhaps too durable, with excessive friction in some joints? Display value is certainly there, provided that forward-facing, flame throwing, mechanised minotaurs are your thing! But it was seeing familiar and forgotten parts used in creative ways in addition to intermittent ‘ta-da!’ moments that made the best aspects of the build experience for me.
In a set with no side-builds, interior space or modularity, in order to warrant the price the completed model must be interesting enough to play with, to look at and of course to build. Having done all 3, I do feel as though the Demon Bull King ticks all the boxes – though I personally feel it only excels in one of those things, with the lattermost being its strongest attribute. Squeaky joints notwithstanding!


READ MORE: Interview with the creative and marketing leads of LEGO Super Mario

All text and images are © New Elementary unless otherwise attributed.
Posted by: Admin Posted on 8/28/2020 08:43:00 am
Email ThisBlogThis!Share to TwitterShare to FacebookShare to Pinterest
Labels: Monkie Kid, Set review