With 1692 pieces, the Monkey King Warrior Mech is the second largest set of the first Monkie Kid wave. Today we will take a look at what’s in the box, list all the new bits in the usual New E fashion and learn that King Midas might have been involved in the design process. 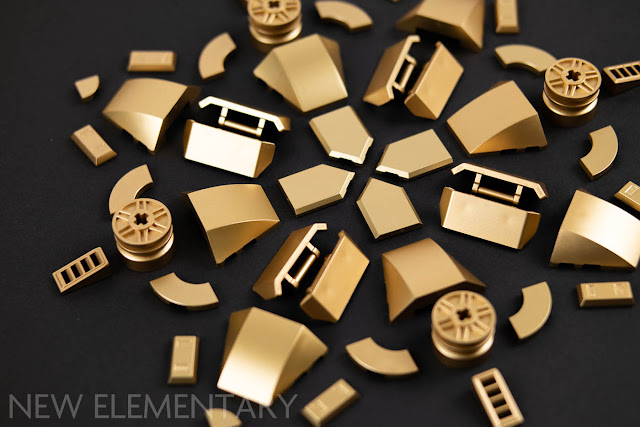 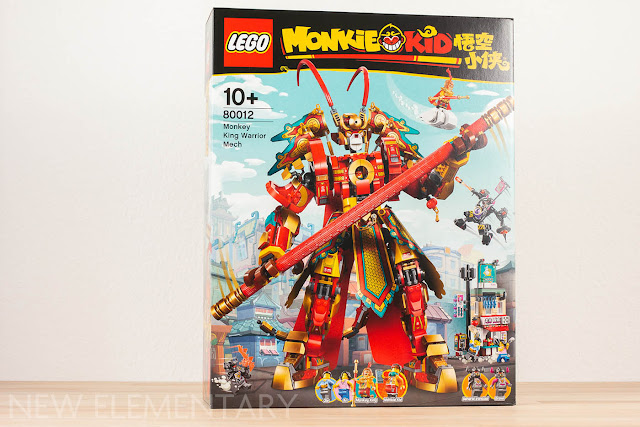 Red, gold and black. The box looks appealing and boosts my anticipation of this set. In particular I like how well the LEGO logo blends in with the colour scheme. The composition on the front is really clever, as the building on the right is little and makes the mech look enormous. I’m curious to see how big the scale differences will be at the end of building. 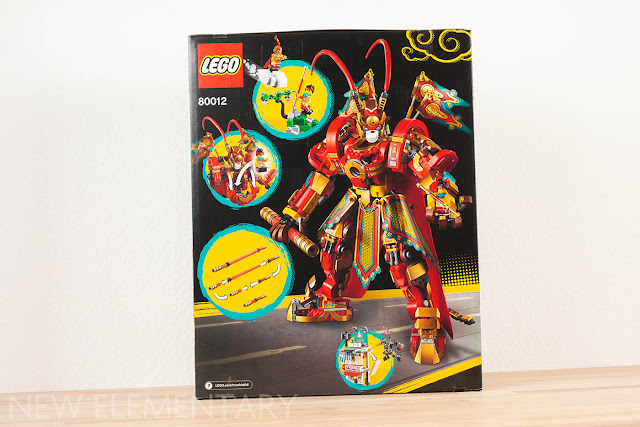 But first, the parts!

The set comes without any moulds that are exclusive to this set, but includes several minifigure headgear and accessories that have been introduced for the Monkie Kid theme. 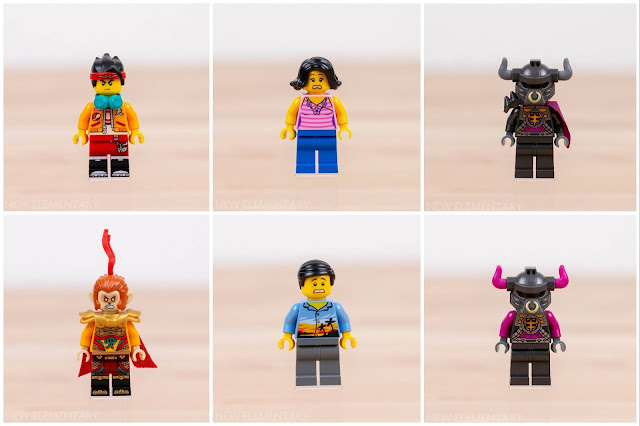 One of the most interesting new bits is the longer version of the lightsaber handle, as described in Tim Goddard’s recent review of 80009 Pigsy's Food Truck. The piece was originally designed for the Monkey King’s staff in Warm Gold Drum Lacquered/ Metallic Gold (6294553 | 67131), but also gets used in this set in Dark Stone Grey/ Dark Bluish Gray (6296951 | 66909). Note that they have different Design IDs, as often occurs with drum lacquered pieces. 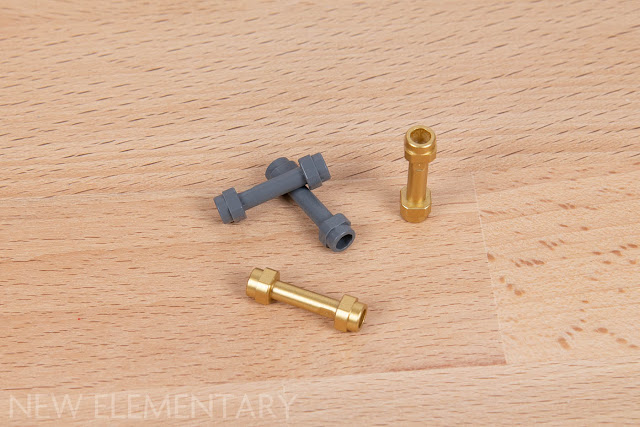 What’s way more interesting in this set are the elements that come in new colours; and one colour catches the attention in particular. 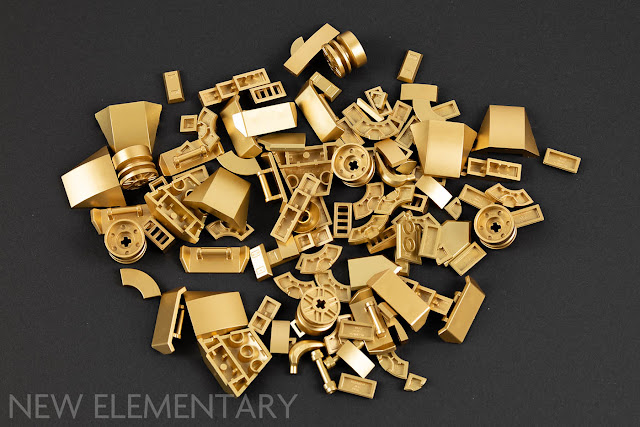 When it comes to golden pieces inside LEGO boxes I always feel a bit tricked by the company’s graphic designers, as they make them look so shiny on the box art. Often these pieces turn out to be just Warm Gold (LEGO Color ID 297, known as Pearl Gold on BrickLink), which is a fine golden colour, but falls short when compared to Warm Gold Drum Lacquered (ID 299, BrickLink’s Metallic Gold).

For everyone who isn't that familiar with the difference, here are some bananas as reference. 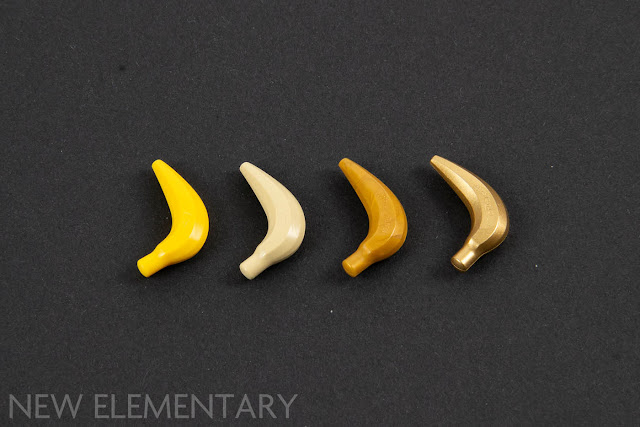 From left to right:
Drum lacquered colours, which are technically decorations and not colours, are more complex to make and therefore relatively rare in products. So as usual I was expecting all the golden pieces in this set to be Pearl Gold, especially because many of its prominent golden pieces like the bananas and 2x2 macaroni tiles were already available in that common colour. 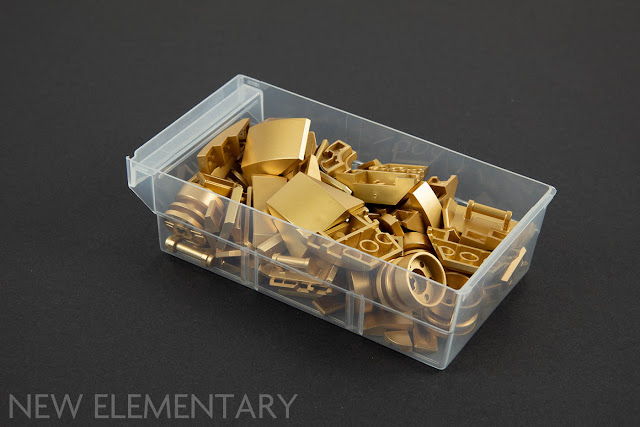 But I wasn’t counting on King Midas now working at the LEGO design department. He must have touched all the pieces, resulting in most of the golden elements turning out to be actually in Metallic Gold! In total: a whopping number of 119 pieces, which make this the set with the most Metallic Gold elements ever.

I don’t know if other people share my excitement but for me, this news made my day! Over the years my appreciation of the metallic colours of LEGO have grown more and more, because from a builders’ perspective they look so much better – a realisation I made when I was building with a lot of Cool Silver Drum Lacquered/ Metallic Silver for my Iron Builder in 2016. Since then I’ve tried my best to grow my collection of Metallic Gold pieces, and now it’s time I reveal which pieces this set brings to make it grow even further.

Five Metallic Gold elements are exclusive to this set and three more appear in the 76165 Iron Man Bust too. I guess the designer of this mech was happy to ‘borrow’ some of the  element colour changes introduced for the helmet. 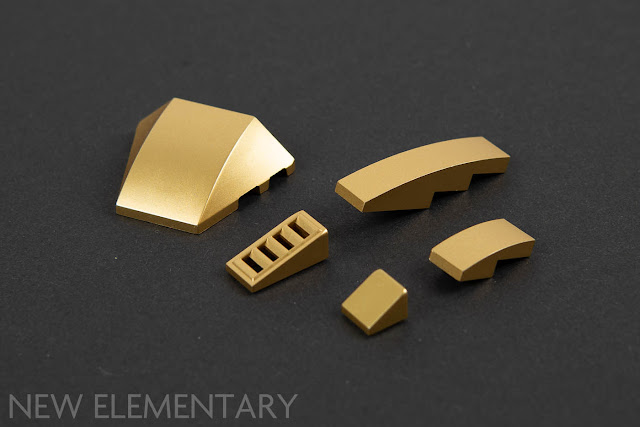 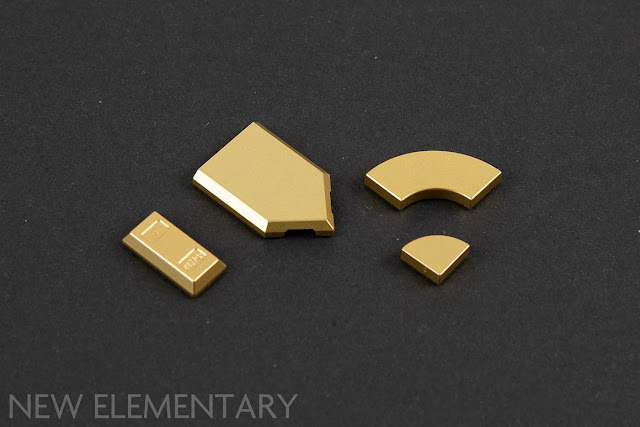 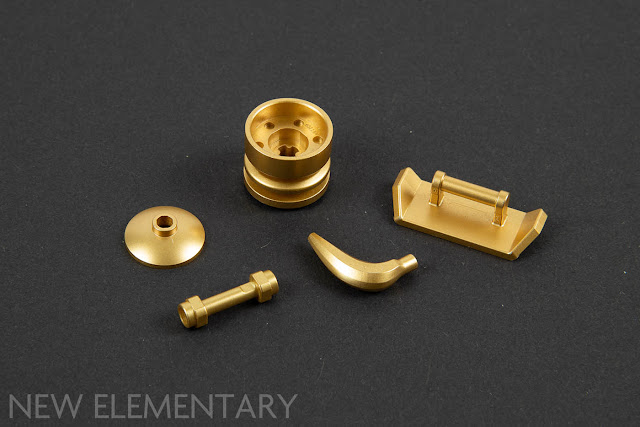 When it comes to colour changes in other colours, it seems like the budget was largely spent on the Metallic Gold pieces, which I genuinely understand, but I found a few other new pieces and interesting elements that are worth a mention here.

Even though the build is mainly Metallic Gold and Bright Red/ Red, this set shows love for Dark Turquoise/ Bright Bluish Green, quite literally. 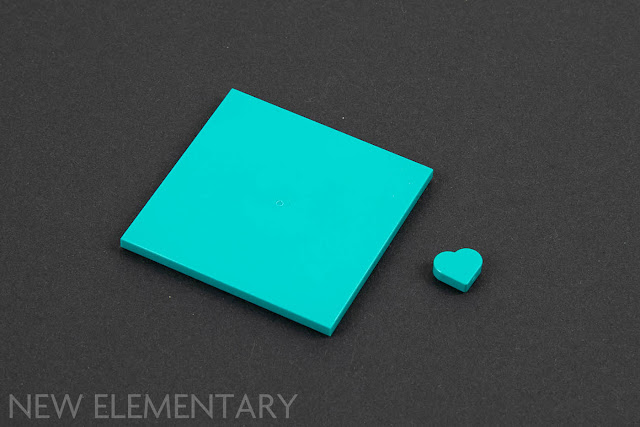 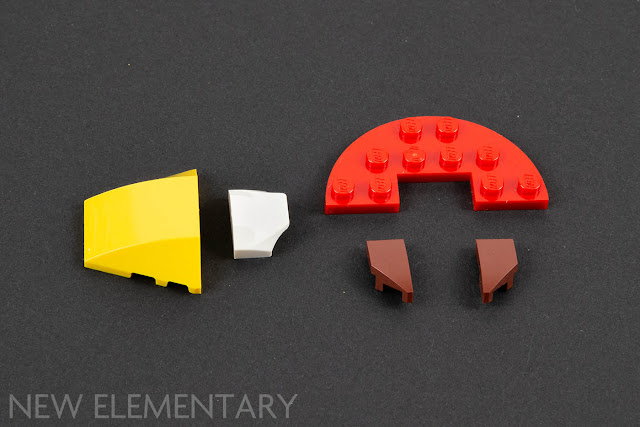 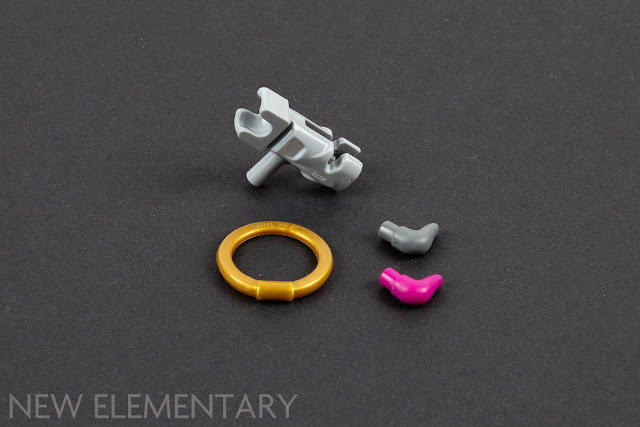 I really like that the cow horn comes in new colours now, these will be very useful for my own creations.

The set heavily relies on stickers, but also features a small selection of printed pieces. 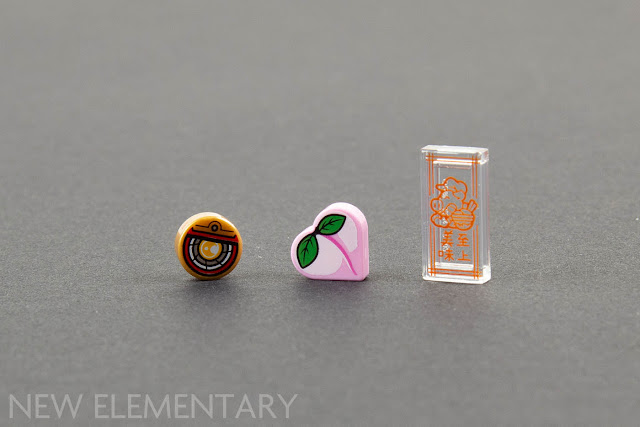 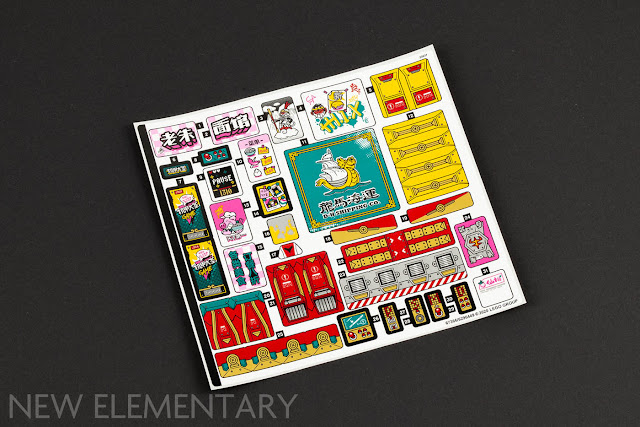 A total number of 47 stickers in 31 designs come on the sticker sheet. Even though I rarely use stickers, the sheet looks quite appealing colour-wise, and I also like the graphic designs, for example the “dragon ship”. 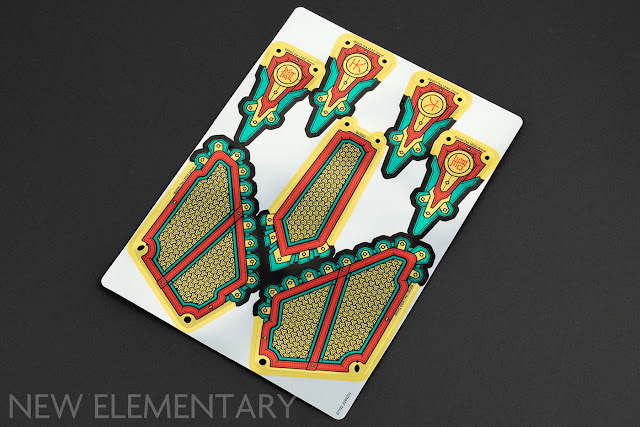 A plasticated foil sheet is included, which includes the cut-outs of seven different foil elements, and is exclusive to this set. 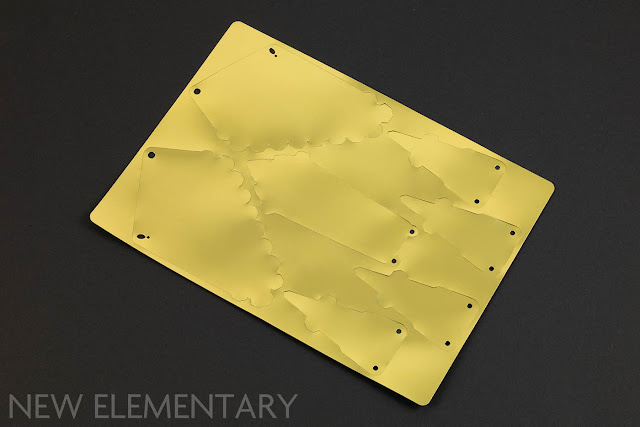 The sheet comes wrapped in plastic with the instructions and therefore is in perfect condition. 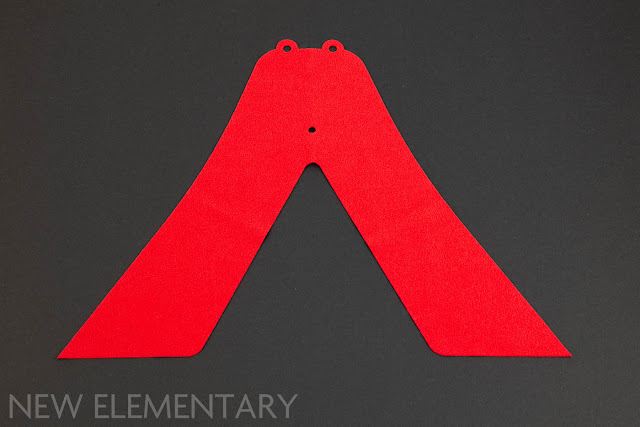 But that’s not all: the mech wears a fabric cape too! 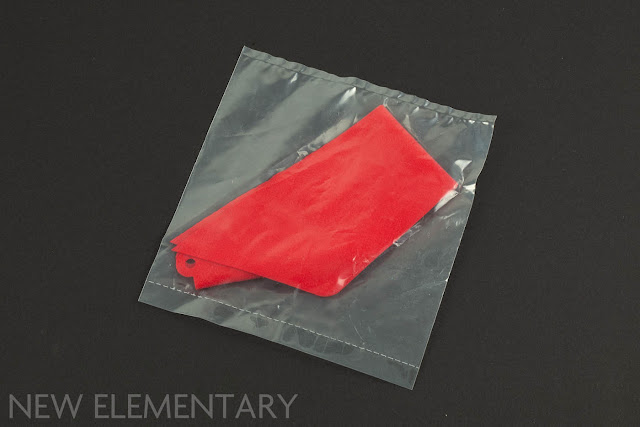 This comes folded and packed in its own bag. 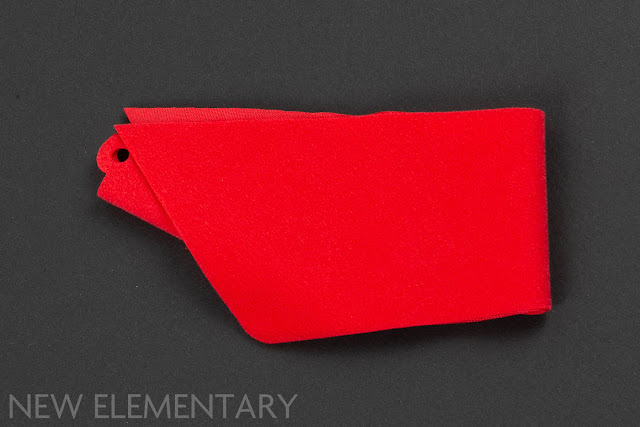 My fear that the folding could leave creases behind thankfully didn't prove true.

This first look at the set is already promising! 119 Metallic Gold pieces speak for themselves. Also the foil elements and cape caught my attention and I’m looking forward to see how they look on the final build. In the next part of my review I will guide you through the build and we will see how it turns out in the end. Meanwhile, here’s a preview of the red bow elements that will shape the mech. Click here to read it now! 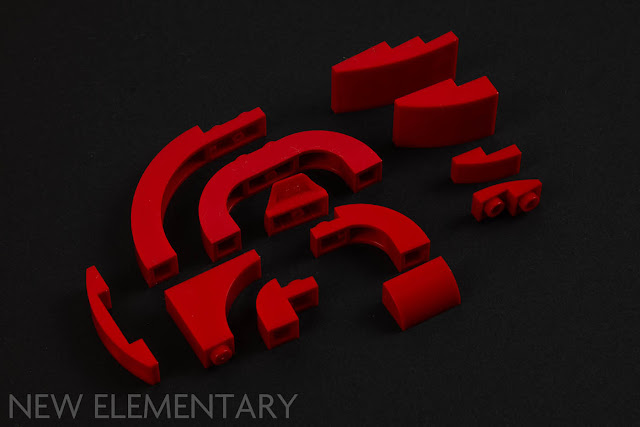 Products mentioned in this post were kindly supplied by the LEGO Group. All content represents the opinions of New Elementary authors and not the LEGO Group. All text and images are © New Elementary unless otherwise attributed.
Posted by: Admin Posted on 7/22/2020 07:46:00 am
Email ThisBlogThis!Share to TwitterShare to FacebookShare to Pinterest
Labels: Colour, Monkie Kid, Set review