Ben Davies returns today to examine the next in our collection of 2020 LEGO® sets introduced for the Asian market; 80104 Lion Dance

We recently examined the new parts introduced in 80105 Chinese New Year Temple Fair, which we found to contain a wealth of recolored parts and new prints. Excitingly, there are even more new elements (and interesting techniques) to discover in the Temple Fair’s smaller counterpart, 80104 Lion Dance. 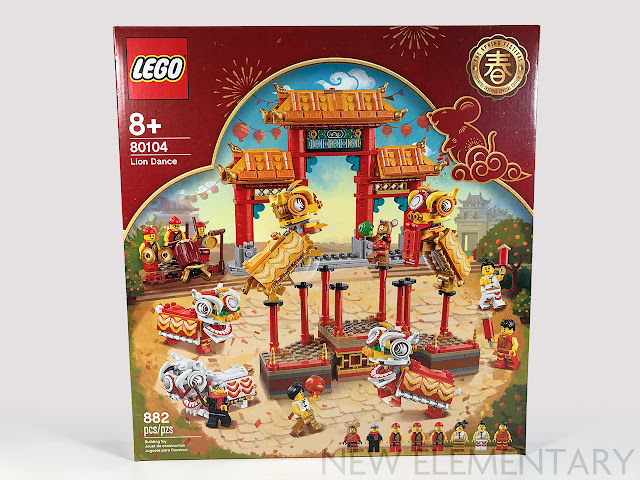 Before we get too far into our review, it’s worth mentioning that 80104 Lion Dance and 80105 Chinese New Year Temple Fair were developed and launched simultaneously, and as such several new recolours and decorations are shared between the two sets. A list of these shared elements can be found below, and more information about them can be found in our review of 80105 Chinese New Year Temple Fair. 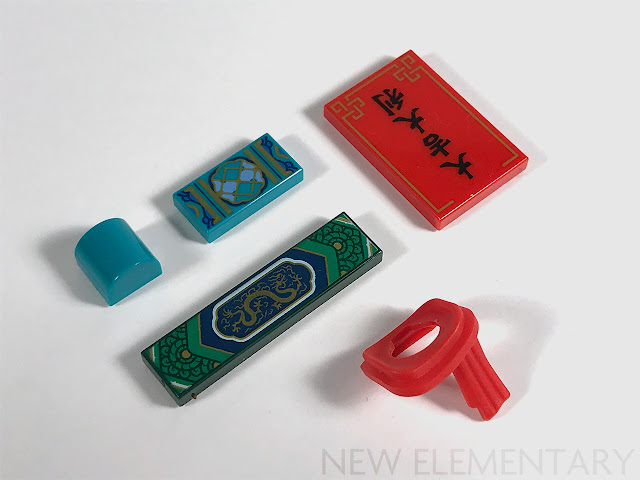 What’s this? A new mould in a seasonal set? For the first time, the LEGO Extended Line team, that works on seasonal sets, has been allowed to create a new mould in the form of Mini Hat, No. 131 in Medium Nougat (6299030|67684) (1x), which I have affectionately taken to calling the “Rat Hat.” 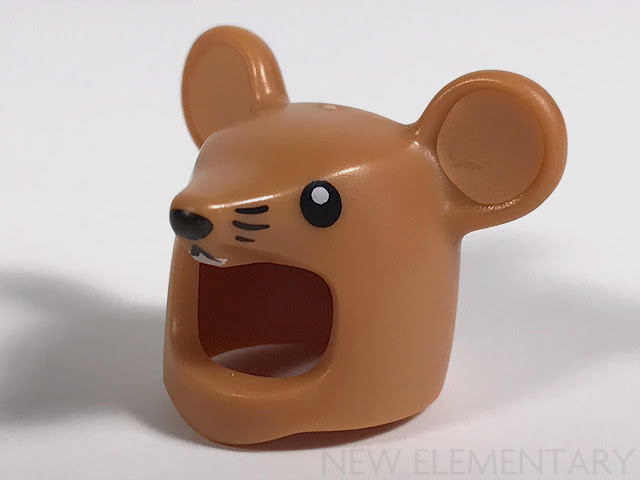 While we don’t usually cover minifigure parts and accessories in much detail on New Elementary, I think it’s worth calling some attention to this one given not only its desirability (and that of the greater Rat minifigure), but the change in company policy it represents.

The most attractive aspect of set 80104 for builders is no doubt the multitude of recoloured elements that the set introduces. 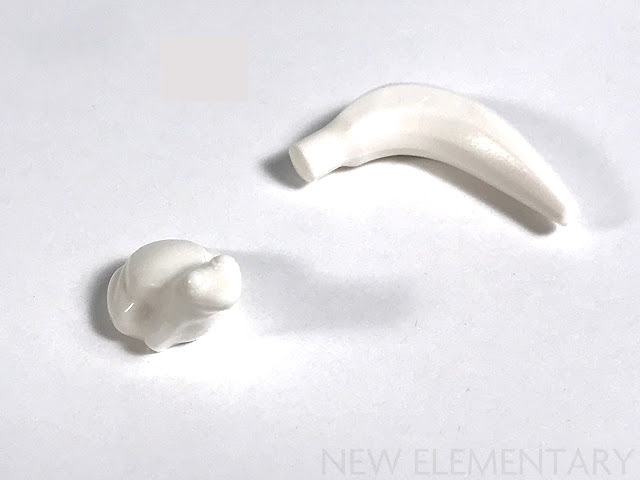 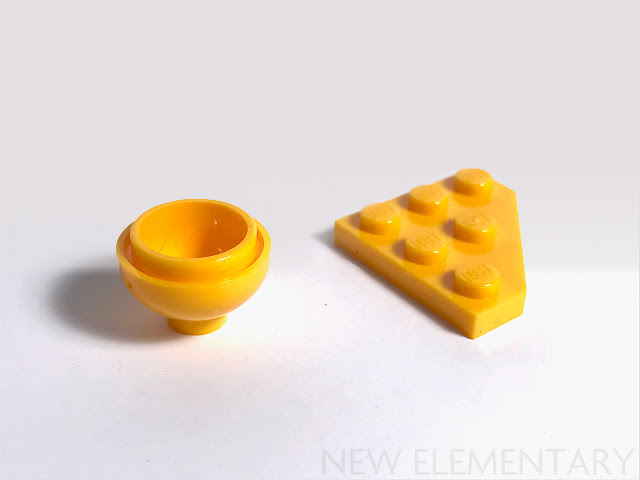 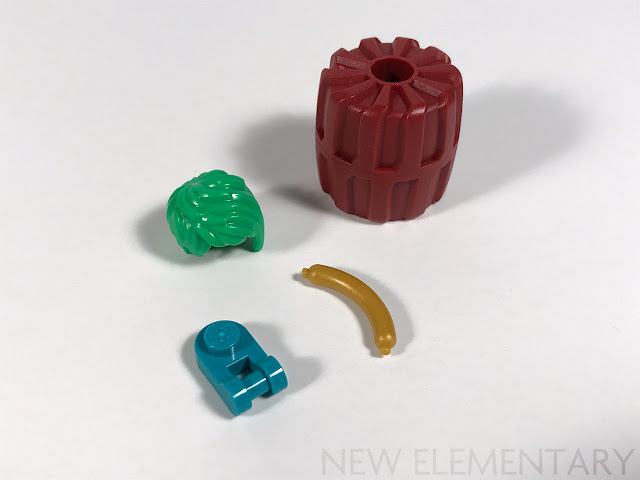 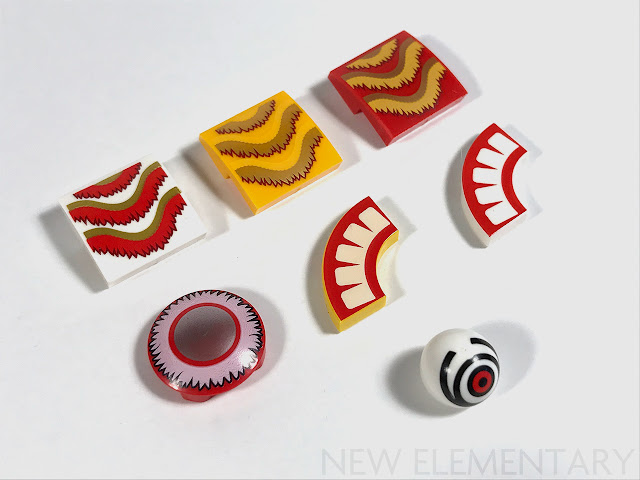 Seven exclusive decorated elements (excluding minifigure parts) appear in the set, all of which are used to add detailing to lions.

In addition to new elements, several hard-to-find elements also appear in this set, to the delight of many builders, I expect. 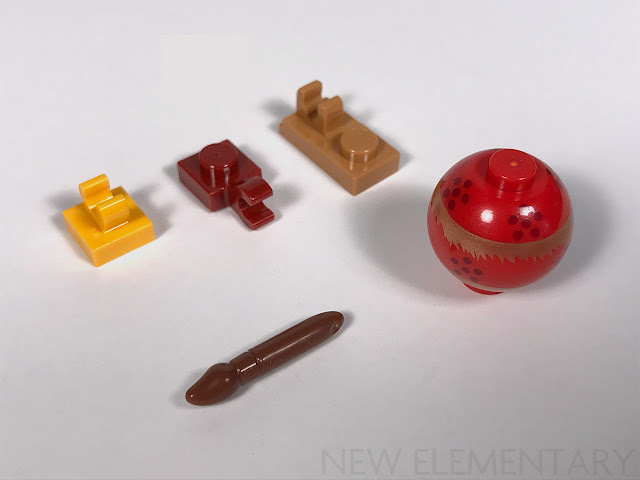 The first bag of parts is used for the assembly of two red dancing lions and a man with lettuce for the lions to "eat" as part of the lion dancing ceremony. 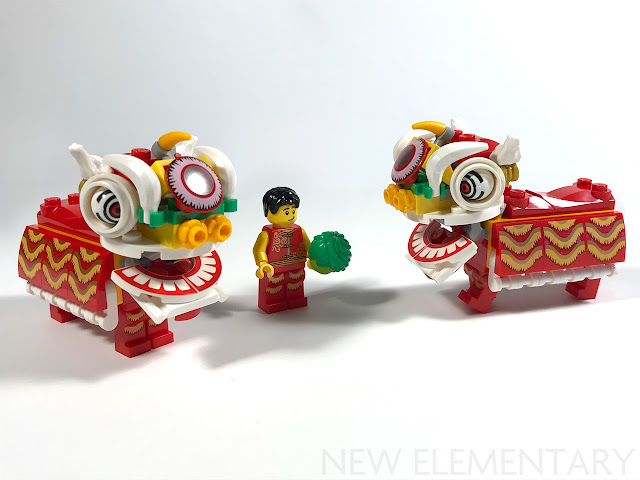 The actual construction of the lions is fairly straightforward, with a 2x6 Brick attached to minifig legs making up the core of the body, with detail added by attaching 1x2x2/3 bows to 1x2 plates with lowered 2x2 SNOT brackets. 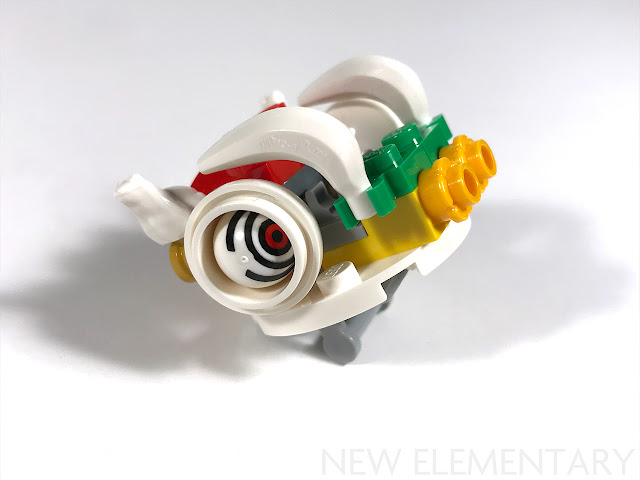 The most interesting section of the lions are the heads. Attached using clips, bananas are used for the lions’ emphasized eyebrows, and frogs are used for the ears. The eyes are created by placing a 1x1 voodoo ball inside of a 2x2 bowl, and then connecting them both to the head with a 1x1 round plate with bar. 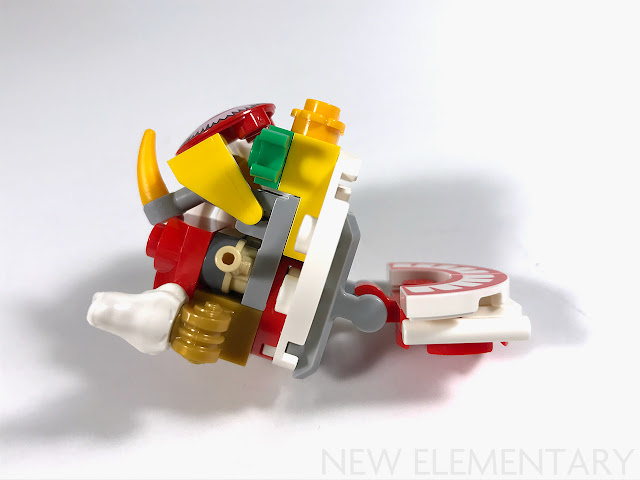 The rounded shaping of the forehead is achieved by a 2x2 inverted round tile and a 1x2 tile with raised bar, which is clipped to the core of the head. Plate 2x3 W/ Horz. 3,2 Shaft in Medium Stone Grey (6195471 | 30166) is used to attach the head assembly to the body, while also providing a mounting point for the mouth.

In a final bit of nice parts usage in bag 1, a literal head lettuce is created by combining a lime green minifigure head with bright green hair!

Bag two centers around building a singular white dancing lion and a group of percussionists and their stage. 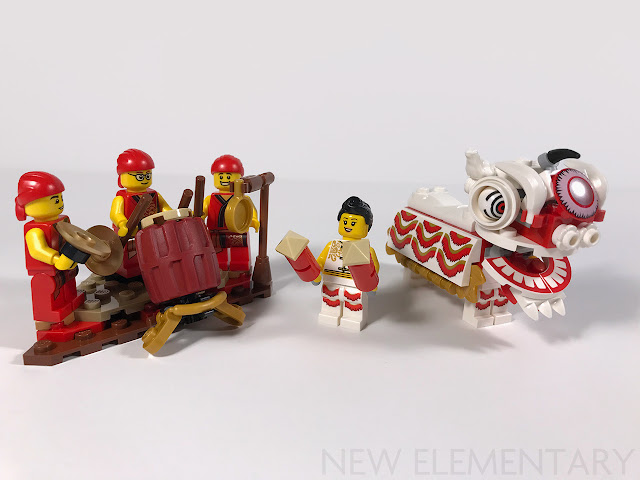 Construction of the lion is virtually identical to the red ones in bag one, but some clever parts usage can be found in the stage, where a rover wheel in dark red is used as the base for a drum. 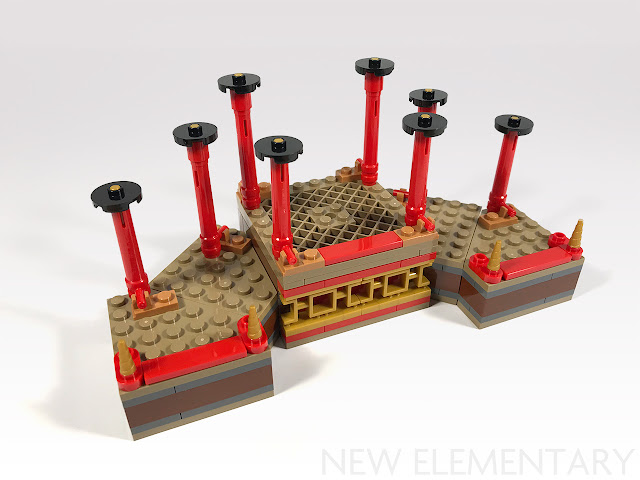 Bag three is devoted to the stage for the lion dance, a fairly simple build which uses. angled plates to create the rounded shape. Poles are included for posing the lions in the middle of the dance, and there is space below the stage for storing accessories. 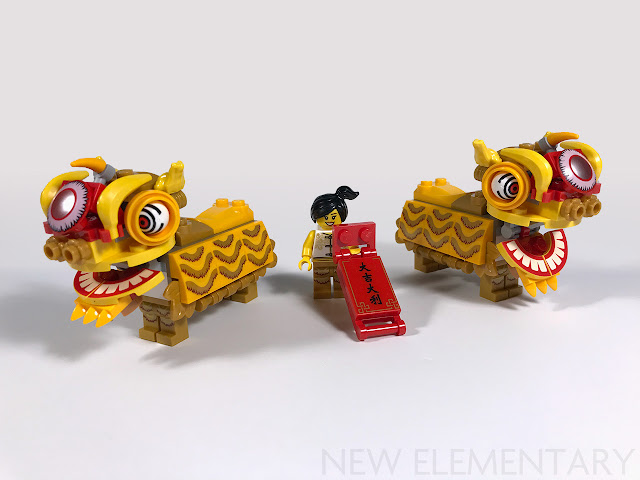 Bag four contains two gold (or rather, Flame Yellowish Orange/ Bright Light Orange) variants of the lions assembled previously and a girl with a large red envelope, which is ‘fed’ to the lion.

Bags five and six contain the parts used for building a traditional Chinese paifang gateway structure, which is arguably the highlight of the set. 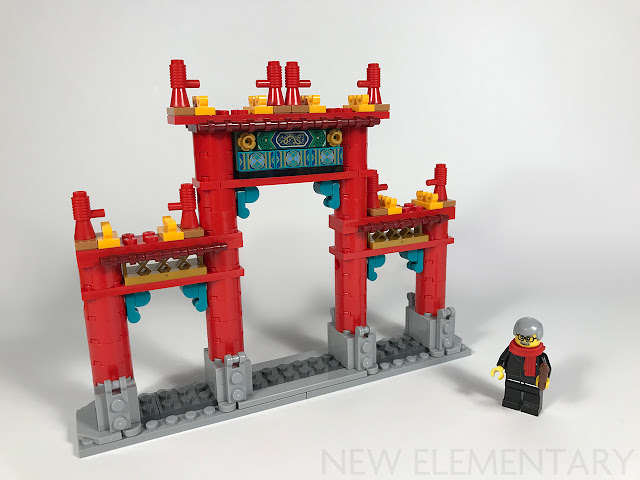 The first of these two bags is used for constructing the basic structure of the gateway, as well as a man with a red scarf and an undecorated paintbrush, which appears here for only the third time. 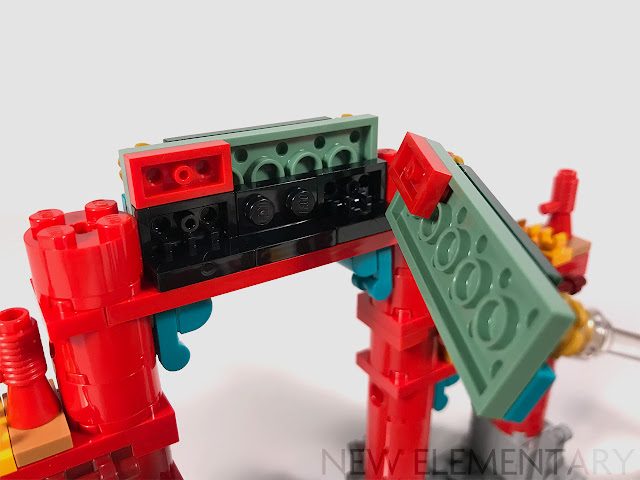 Of note, the elaborate decorative tiles embedded into the gate appear on both sides. To achieve this inversion, multiple 2x2 Tiles with Vertical 1x2 Plates (41682) are placed next to each other with studs facing opposite directions. These serve as mounting points for 2x6 plates, which are then decorated with tiles. 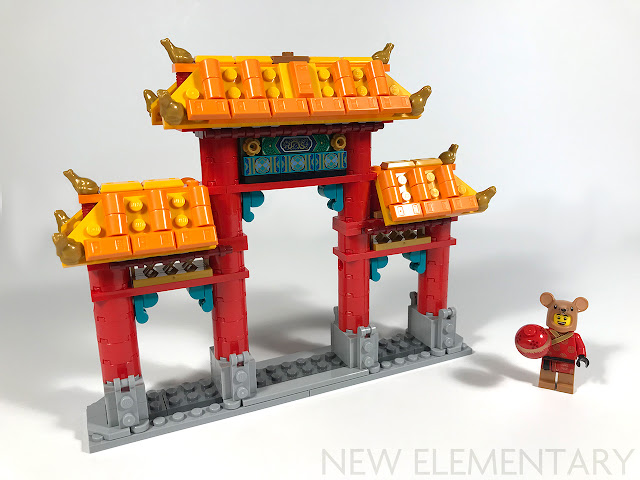 The final set is quite appealing, delivering a set that is simultaneously great for play, display, and parts for builders. 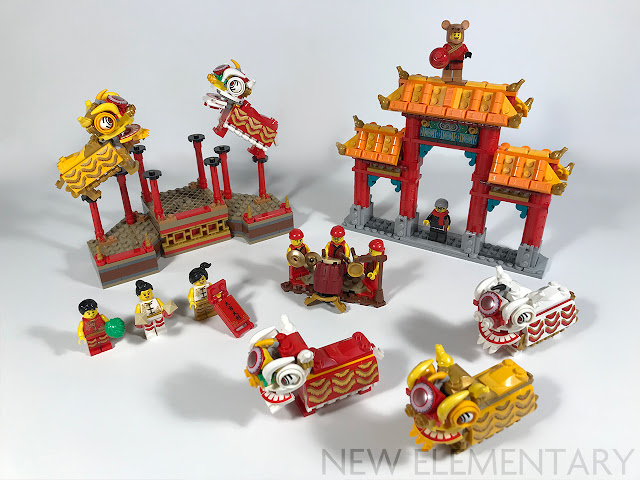 Although the process of building all the lions can get tiresome, the way they are scattered throughout the building process helps to alleviate some of that repetition. Furthermore, thanks to the addition of the gateway, percussionist stage, and lion dance stage, the set looks fantastic when placed on display, even without 80105 Chinese New Year Temple Fair. The incredible number of new elements for builders only adds to the desirability of this set, and it is a set I would certainly suggest getting if you’re fortunate enough to find a copy for sale.

READ MORE: Discover the parts inside another set aimed at the Asian market: 80009 Pigsy's Food Truck, including an alt build from Tim Goddard

Products mentioned in this post were kindly supplied by the LEGO Group. All content represents the opinions of New Elementary authors and not the LEGO Group. All text and images are © New Elementary unless otherwise attributed.
Posted by: Admin Posted on 7/08/2020 11:14:00 am
Email ThisBlogThis!Share to TwitterShare to FacebookShare to Pinterest
Labels: Chinese Traditional Festival, Set review