Winter will soon be upon us; the holiday season is approaching. LEGO gave AFOLs the perfect opportunity to decorate their homes for this occasion ten years ago with the Winter Village line.  We’ve mostly seen buildings made for humans so far, but this time, LEGO decided to make a surprising addition to the Winter Village by giving our minifigures edible neighbours. Indeed, this year’s Winter Village set is 10267 Gingerbread House. 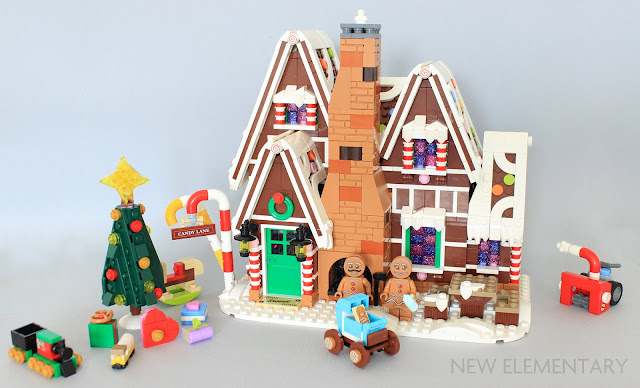 With 1477 elements, the Gingerbread House is the second-biggest set of the Winter Village, following 10229 Winter Village Cottage with its 1490 parts. However, there aren’t that many new elements in this set and none are new moulds. 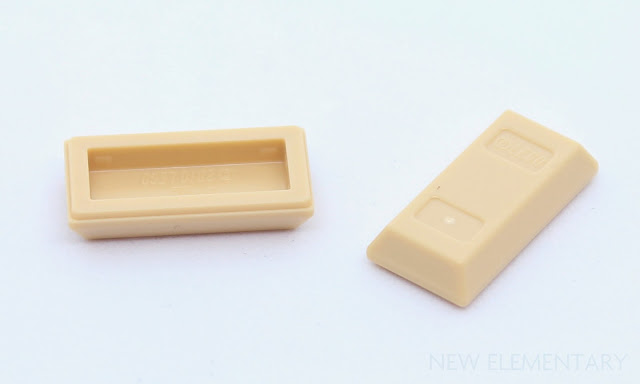 Among the recoloured elements are 11 gold ingots in Brick Yellow/ Tan (6271228|99563). They’re used here to represent white chocolate, but I could see them being used as wood or stone details. 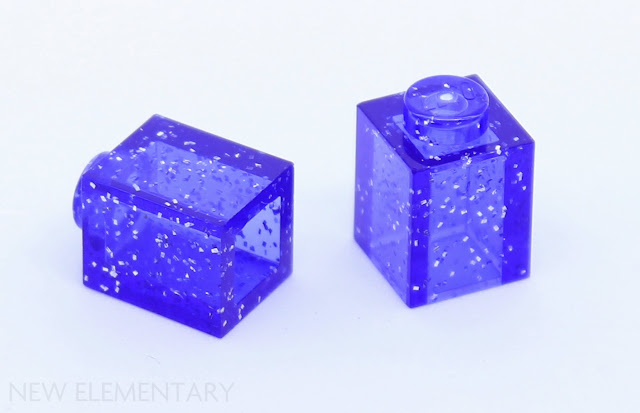 Another element produced in a new transparent colour is the Diamond w/ 3.2 shaft in Transparent Yellow/ Trans-Yellow (6271209 | 35649), which will certainly please Classic Space builders as it could easily be used for detailing on big ships or as a canopy on microscale vehicles. Four of these are included in the set. 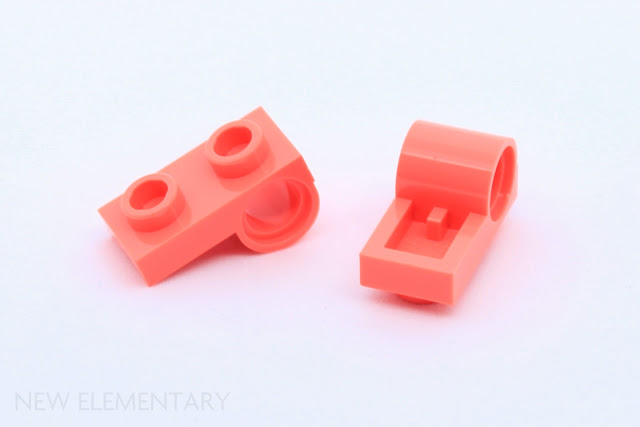 Last but not least, the plate 1 x 2 with bottom hole makes its appearance in Vibrant Coral (6258092 | 28809). A surprise, to be sure, but a welcome one. There are eight of them in the set. [Editor's note: set designer Tiago Catarino has since explained to New Elementary why he used this odd new colour for a hidden piece. "I just picked the rarest colour it existed in at that point. It is also a means of standing out on the instruction booklets, and since it's used in the first few roofs and then gets hidden, people can see it clearly and 'learn' the roof technique, before going on to the later roofs where you have brown ones, for aesthetic purposes!"] 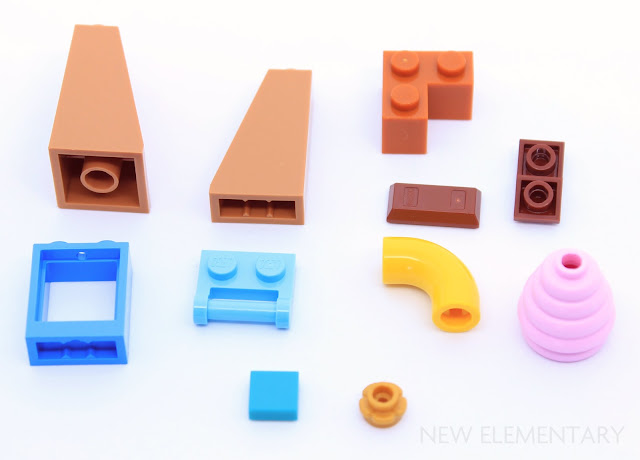 However, while there are “only” four recoloured elements, the Gingerbread House also brings a nice selection of rare parts:


The minifigures in 10267 Gingerbread House

Winter Village sets are often generous with minifigures, but this time, the set is focused on one small family, made of Mr Gingerbread, Mrs Gingerbread and their baby. 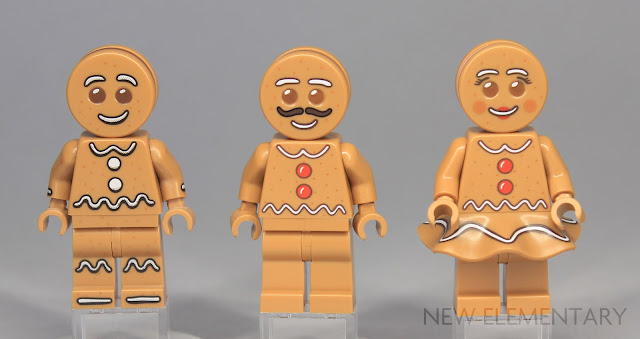 The Gingerbread Man pictured on the left is from the Collectable Minifigures Line and is not part of the set, he’s only included as a means of comparison. 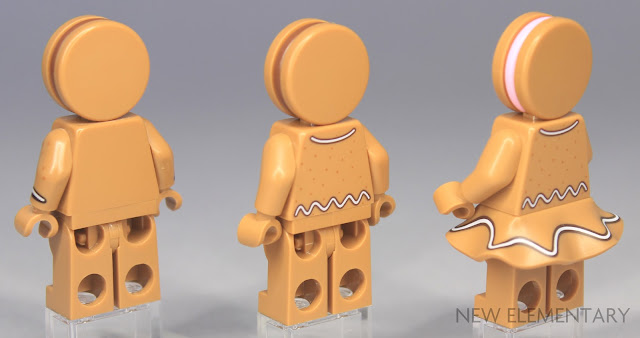 The minifigures from the Gingerbread House do not feature leg and arm printing, but the back of their torso – they share the same element - is printed. In addition to that, Mrs Gingerbread’s skirt is printed too. This is, by the way, the first appearance of the hard-plastic skirt in Medium Nougat.

The biggest difference between the first Gingerbread Man and Mr Gingerbread is the moustache, although their facial expressions are a bit different. Mrs Gingerbread’s head is much more unique, with more feminine attributes (eyelashes, pinkish cheeks and a bit of lipstick), and more importantly Bright Pink frosting. 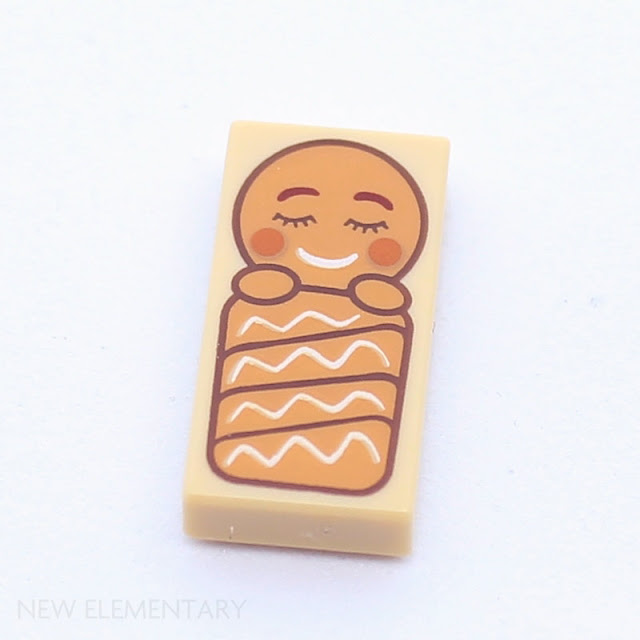 I was a bit surprised by the baby, which is represented by a printed 1 x 2 tile in Brick Yellow (6271241 | 58508). I wonder why this was chosen over a printed nanofig / trophy (90398) or a baby minifig. I guess the designer absolutely wanted to give it a circular head so this was the best way, and I think he did well because this gives us a clear look at the baby’s expression. One could just eat them up. 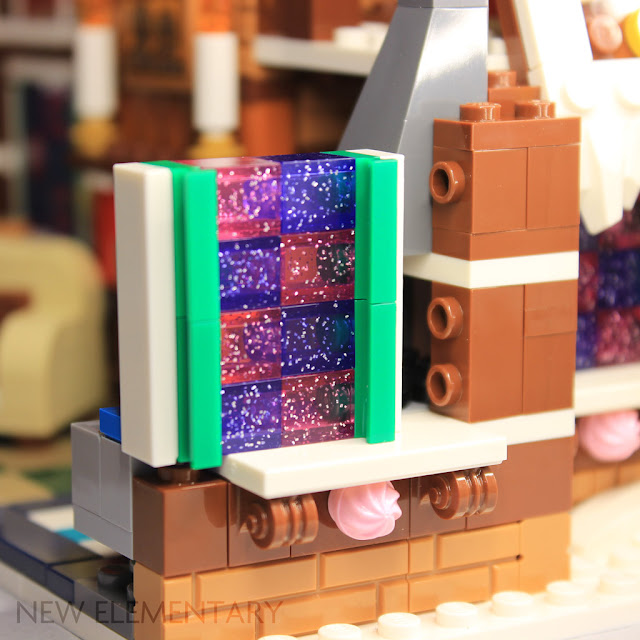 The build of the gingerbread house is quite straightforward, with some SNOTted windows and wall sections here and there, thanks to the use of the modified brick 32952. 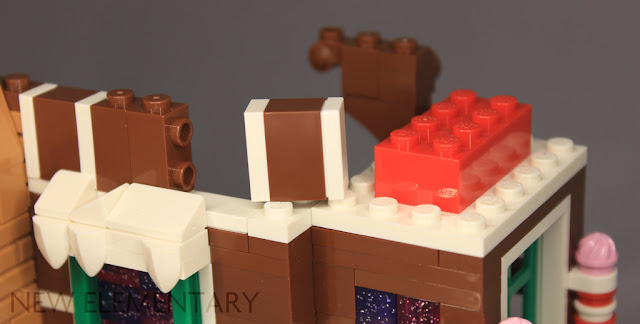 By the way, we can see here that a Bright Red / Red 2x4 brick is hidden above each door. Could this be a late nod to the 50th anniversary of the brick that occurred in 2018? [Editor's note: set designer Tiago Catarino has since confirmed that Victor was half-right in this assumption. "Using a 2x4 brick was an homage to the brick; red is the most iconic color of it in LEGO. Not necessarily having to do with the anniversary."]

The most interesting aspect of the set is the roof. Tiago Catarino said in the designer video that it was the aspect of the set that took the most time to get right with the chimney, and it’s easy to understand why when you take a close look at it. First of all, it’s worth pointing out that while they all follow the angle of the slope 2 x 1 x 2 (4629736 |60481), each section of the roof is built at a specific angle, so there aren’t two identical sections. Even the sections above each door aren’t identical, even if they look quite similar. Too illustrate, I created these renders from a Mecabricks design by Stephan3321. 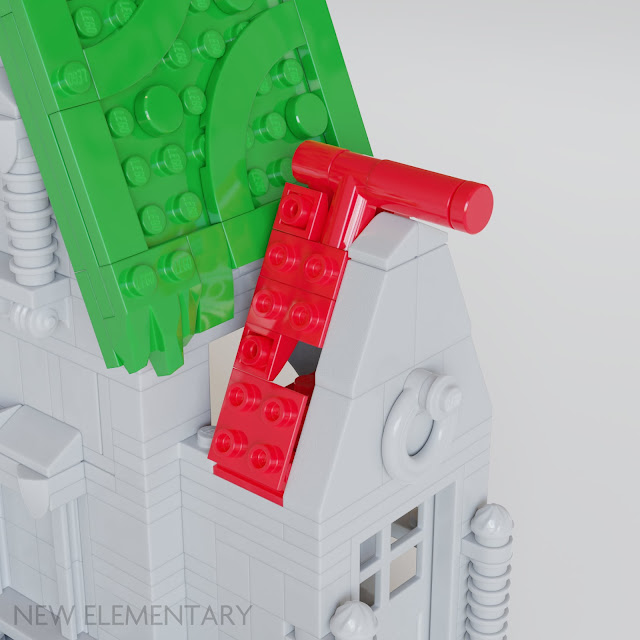 This is because of their depth: the roof above the secondary door (above) has a depth of only four studs at the ridge (which is, by the way, done with Technic elements that give a nice smooth finish and perfectly close the gaps between each side). 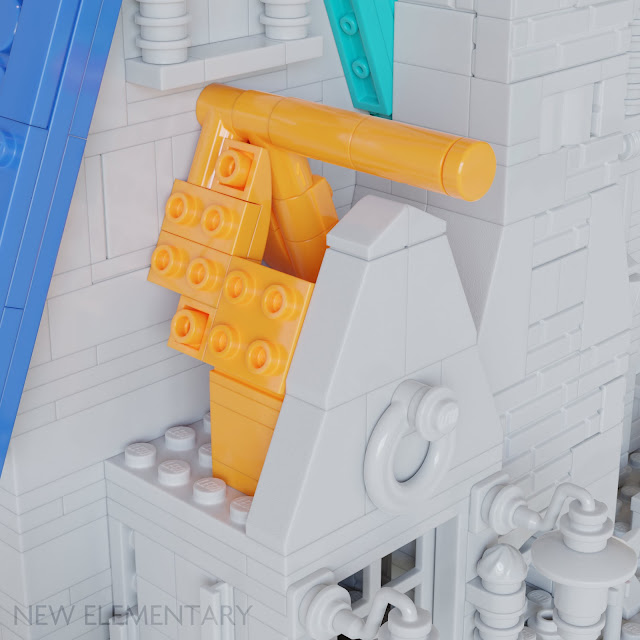 As a result, the ridge of roof above the main door is slightly steeper, and ends right below the window sill. In addition to that, the roof sits right against the 1 x 1 brackets (6238874 | 36840) that hold the lanterns. An excellent job!

The rooves over the first floor are interesting too because they’re built asymmetrically. On the outer side, they’re made with rocker bearing and plates (3937 and 6134), just like the rooves above the doors, but on the inner side they’re made with modified plates (15712 and 60478). The modified plates sit a bit higher, and are attached on the exterior of the rooves. The difference, however, is negligible: 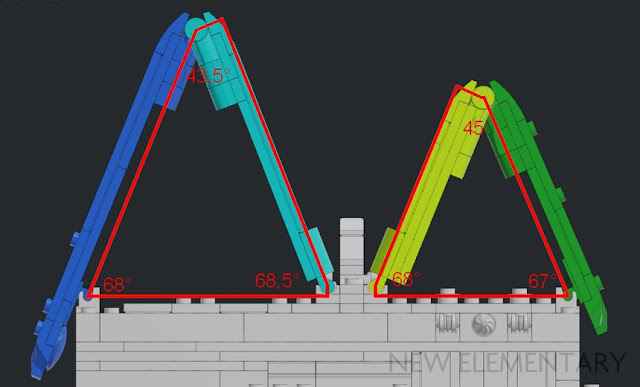 A last segment, mostly hidden behind the chimney, seamlessly closes the roof. It is also attached with modified plates. 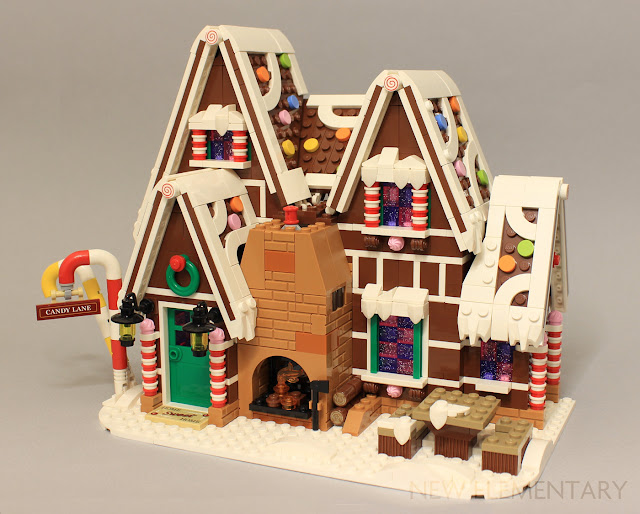 To hold it in place securely, a portion of wall slides beneath it and is connected to the rest of the house with, again, modified plates. 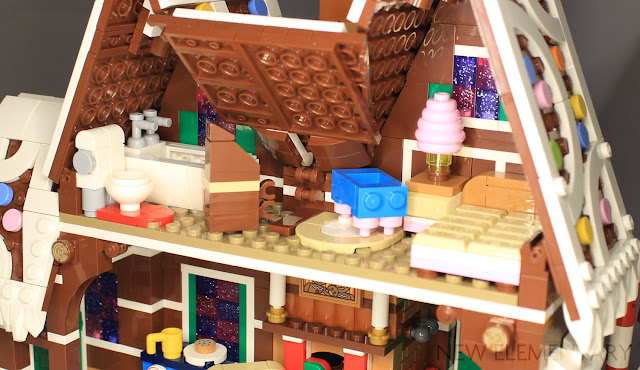 In addition to the Gingerbread House itself, the set comes with a snow blower, a baby carriage , the mandatory Christmas tree, as well as a lot of gifts. 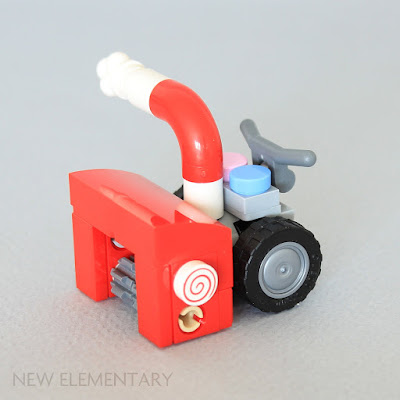 The Gingerbread House was mainly designed by Tiago Catarino, but it’s Jamie Berard, Design Manager of the Creator Expert line, who’s built the snow blower. A nice touch is that the two 8T gears at the front rotate when you push the blower. It is equipped with two buttons, a blue one and a pink one, and I can’t help but think of the logo of Flickr, a photo-hosting site popular among AFOLs.

The Christmas Tree reminds me of the one from the previous offering, 10263 Winter Village Fire Station, but I think it looks even better. This time, the designer dropped the six-branch crystal (6116738 | 42409) seen in some previous Winter Village sets and went with a brick-built solution instead for the tree-topper. 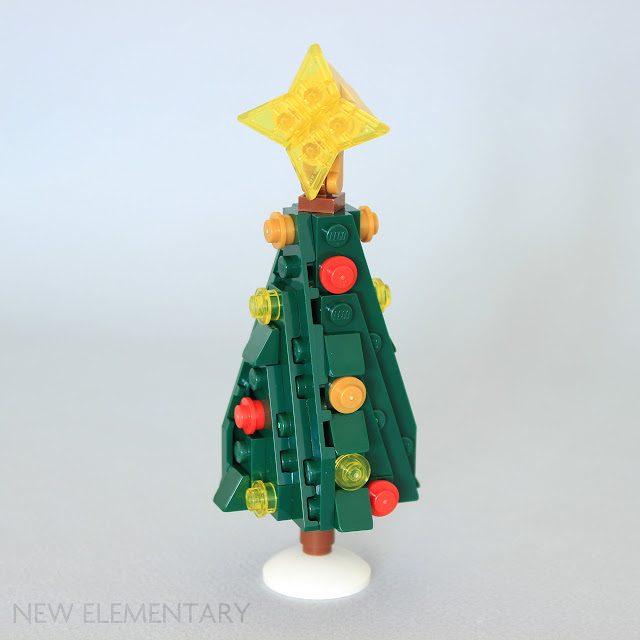 It might be a bit big compared to the tree itself, but I think it looks great nonetheless, and it’s sturdier than I thought.

Around the tree there’s a lot of toys and gifts, including a truck, a train, and a rocking horse where the baby can be seated. Clearly they’ve been spoilt!

Now let’s move on to the gingerbread house itself!

A lot of details stand out, like the candy cane columns around the doors and windows, the windows themselves (which use glittery bricks), the candies on the roof and the white stripes on the walls. 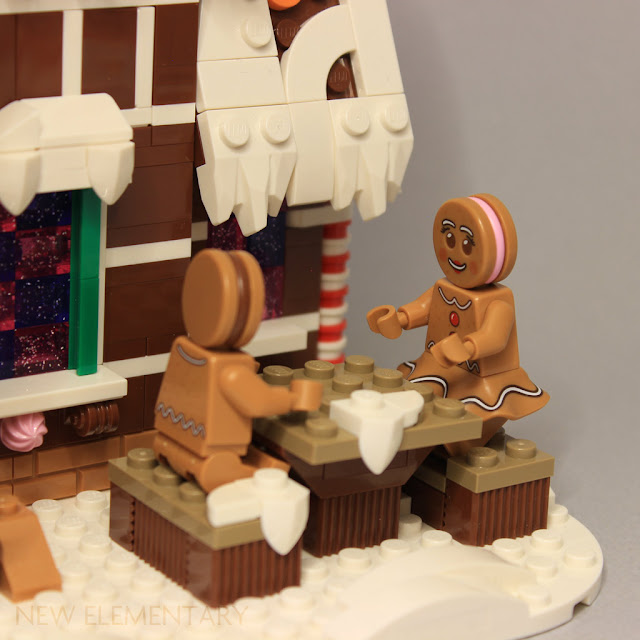 In front of the house there’s a table with two benches designed so that Mrs Gingerbread can sit without removing her skirt. 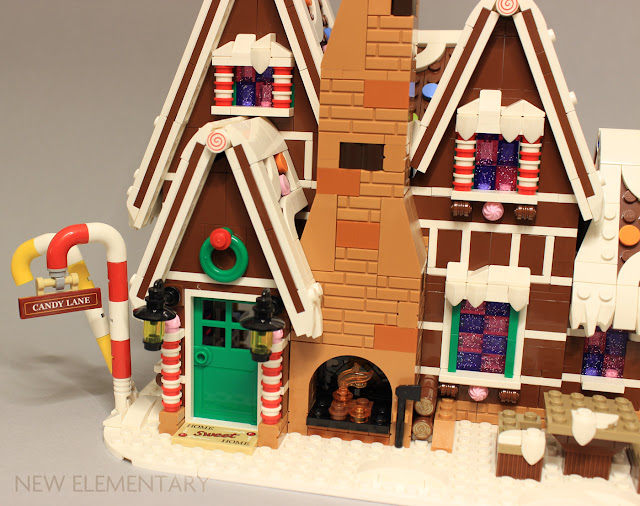 Next to the main door are two candy canes, one of which bears the name of the street, Candy Lane. The street name and doormat are stickers.
. 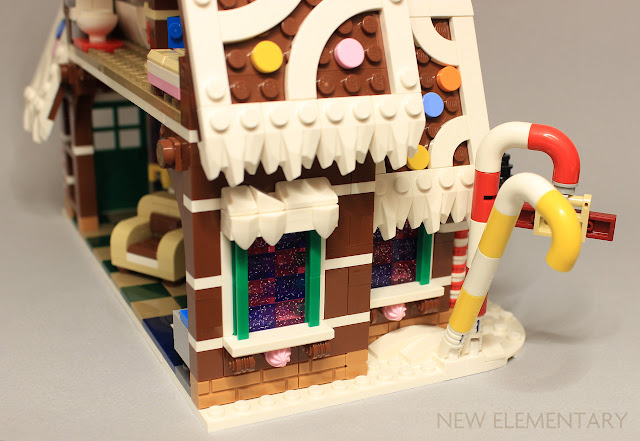 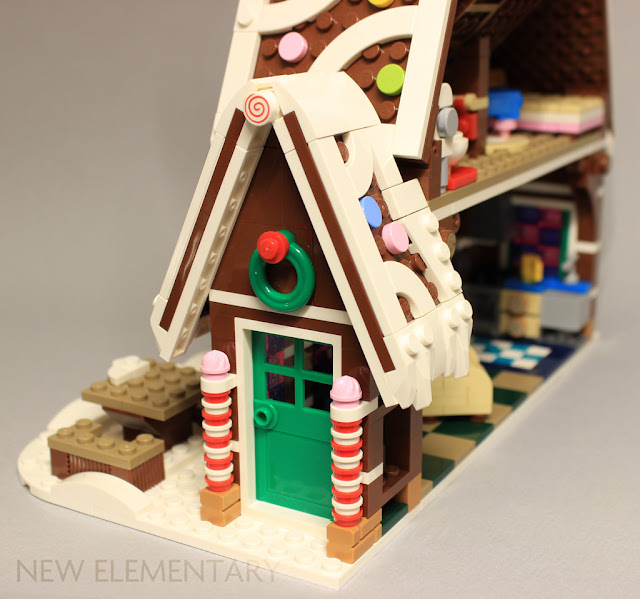 On the sides are a pair of windows and a door. 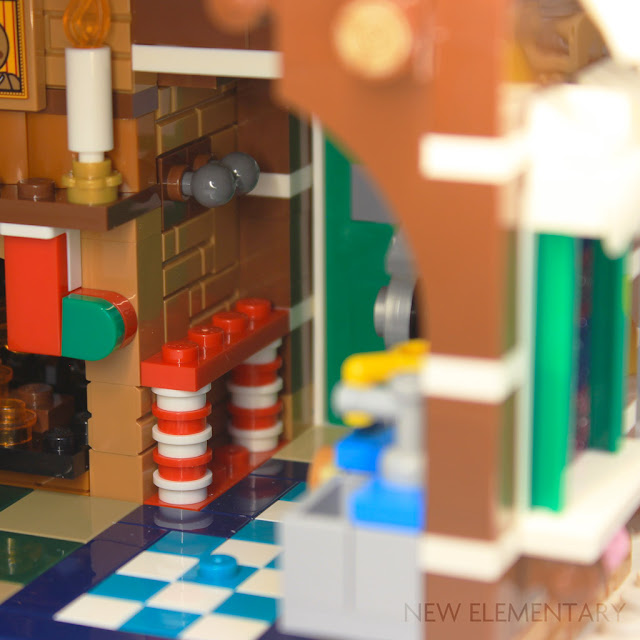 I was surprised by the relatively small surface available inside at first but despite that, the interior is packed with details! First there’s a hall with coat hangers and a small shelf. 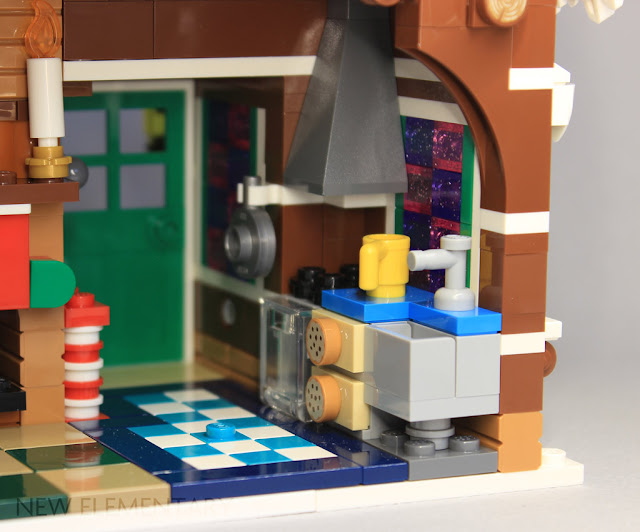 Then there’s a small but well-equipped kitchen with an oven (is this where gingerbread babies are made?), a cooking plate, an extractor hood, a cabinet with cookie-drawer knobs and a sink. So much going on on a 6 x 2 stud surface! The floor in front of it is entirely tiled, safe for one plate, which allows to securely put a minifig in the kitchen. 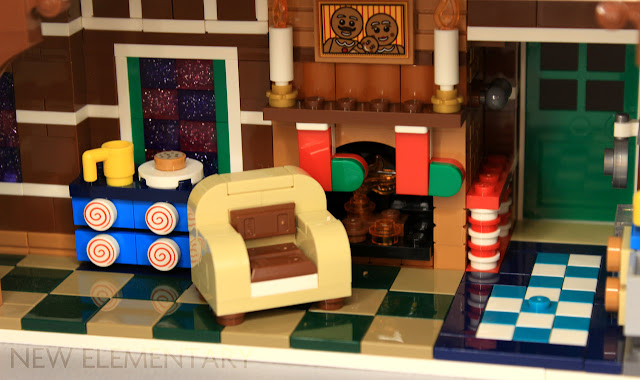 Then there’s the living room with an armchair made of chocolate. On the fireplace two socks are hanging, and above it are two of the newish candle (6234807 | 37762) and flame (6236437 | 37775) elements introduced in Harry Potter sets from 2018. A family portrait – the third and final stickered element in the set - is hanging above the fireplace. Behind the armchair there’s a small cupboard. 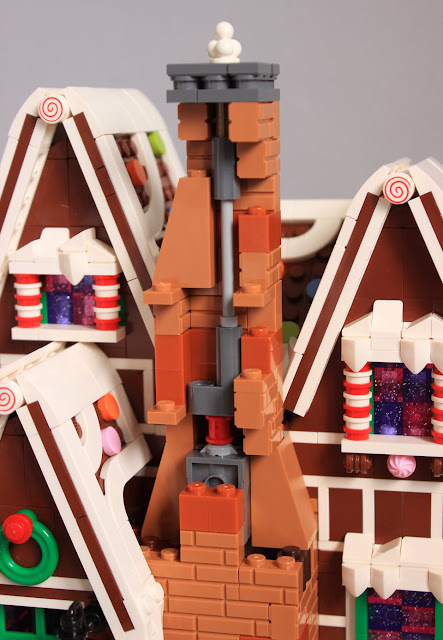 As per tradition, there’s a lighting brick in the gingerbread house, and it is well hidden in the chimney; to activate it you have to push the smoke element and it lights up the fire. 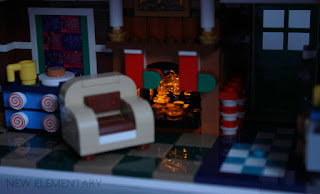 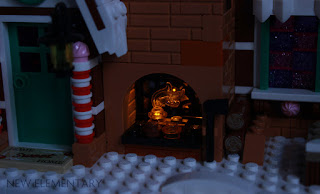 Since it’s a two-sided fireplace, the light is visible from both the inside and the outside of the house. 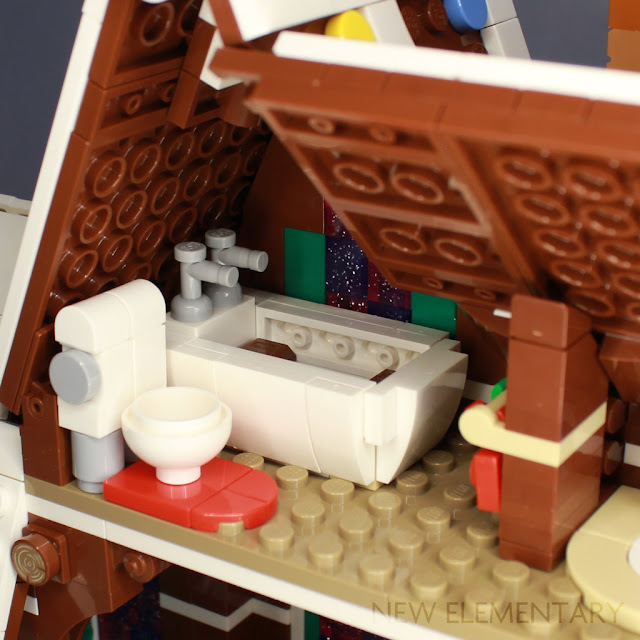 Upstairs there’s the bathroom, with toilets and a bathtub, and a bedroom with a bed, a night-table, and a crib for the baby. 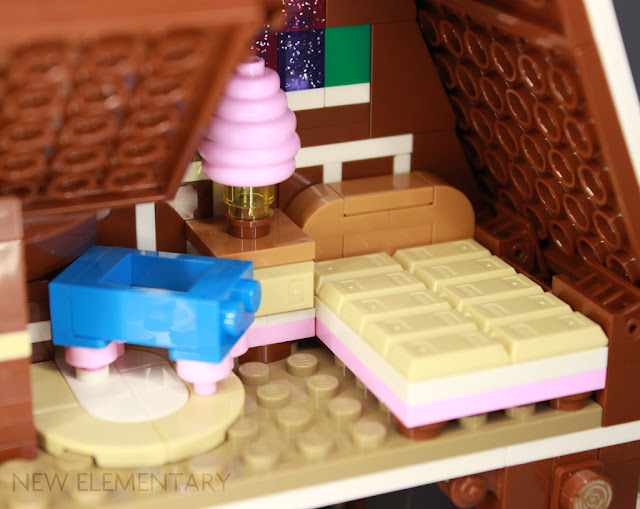 The Gingerbread House is a lovely set that perfectly captures the Christmas spirit. It’s colourful, has a striking design, and makes an original addition to the Winter Village. 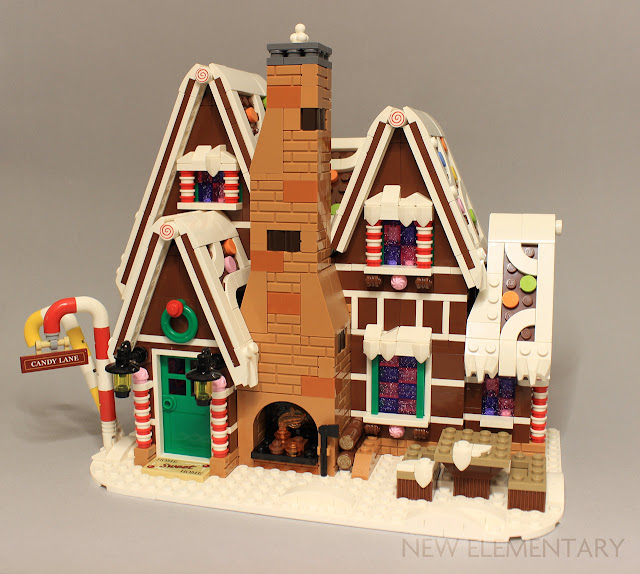 It may not bring a lot of brand new elements, but comes with a nice selection of rare parts, and, quite surprising for a Winter-themed set, quite a lot of Reddish Brown elements.

Products mentioned in this post were kindly supplied by the LEGO Group. All content represents the opinions of New Elementary authors and not the LEGO Group. All text and images are © New Elementary unless otherwise attributed.
Admin: Tim Johnson Posted on 12/20/2019 10:23:00 am
Email ThisBlogThis!Share to TwitterShare to FacebookShare to Pinterest
Labels: Creator Expert, Set review, Winter Village