We hope you all had a good Christmas and got some brick-based treats from Santa. Looking forward to 2020? Ben Davies is here to get you in the mood with a beautiful new Architecture set: 21051 Tokyo. 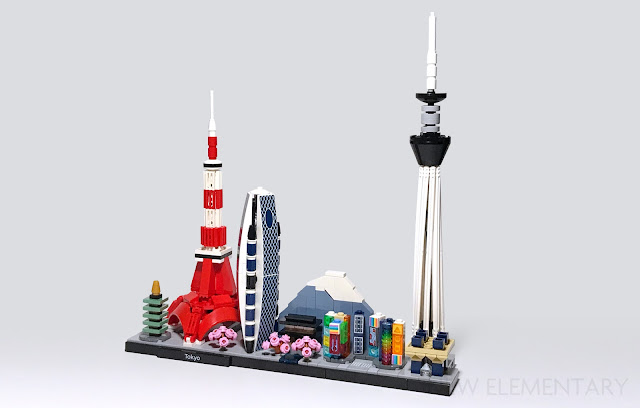 LEGO® Architecture goes small in Japan in the latest addition to the Skylines subtheme. 21051 Tokyo depicts a composite skyline of the capital city, featuring eight different landmarks. The 547-piece set will be available January 1st, 2020, retailing for US$59.99 / £59.99.

Before launching into the building process, let’s examine the newly recoloured parts which appear in the set! 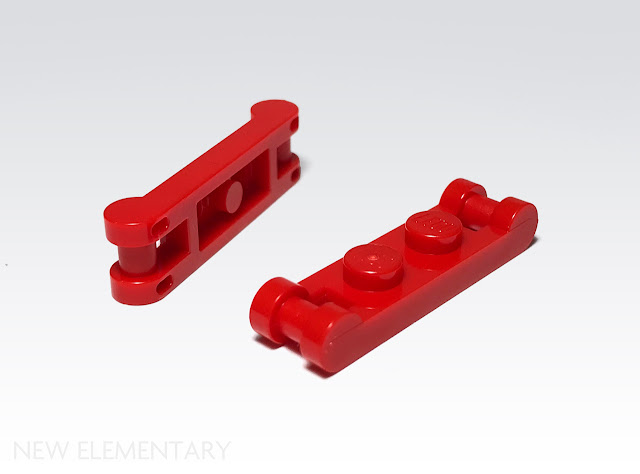 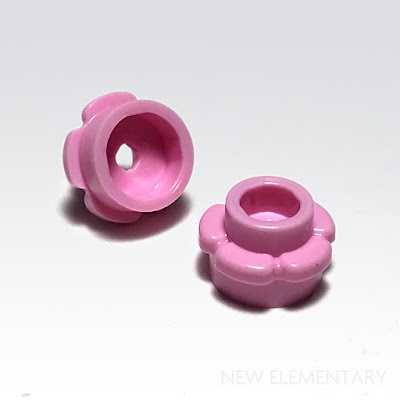 Debuting in Light Purple/ Bright Pink for the first time is the updated 1x1 flower (6212501 | 24866) element. While this may be the first appearance of this part, I think it is safe to assume that this will not be the last time we see this part/colour combination.

In addition to recoloured parts, a number of new printed elements have been introduced to assist in creating Tokyo’s landmarks. Let’s take a look!

Two new printed White 2x8 bows (Design ID 42918) have been introduced specifically for the Mode Gakuen Cocoon Tower, after the introduction of the mould in 2019’s 10265 Ford Mustang (see our review here). One version (Element ID 6291465) features White crosshatched lines against a Earth Blue/ Dark Blue background, while the other (6286276) features the same pattern with the addition of a vertical Earth Blue oval. 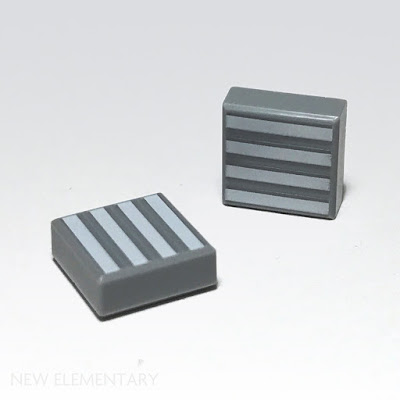 One of the most exciting new elements in the set may actually be a new Medium Stone Grey/ Light Bluish Gray 1x1 tile decorated with four white stripes (6286223). While its most obvious use is as a microscale crosswalk, as it is used for here, I imagine this element will be well-received by a number of builders in different genres given its abstract decoration which lends itself to multiple uses. 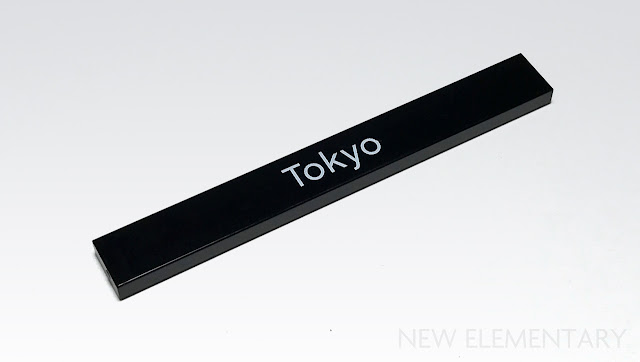 Continuing a tradition around since the start of the Architecture series, a Black 1x8 tile with ”TOKYO” printing (6212501) is included for labeling the base of the model.

While none are new, several rare elements show up in 21051 Tokyo after having only made a single other appearance. 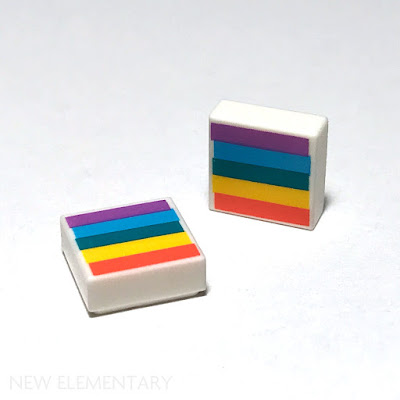 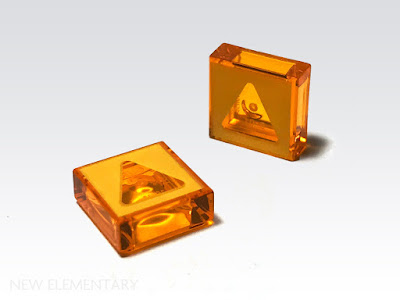 After a year-long hiatus, the Transparent Bright Orange/ Transparent Orange 1x1 tile with Bright Yellow/ Yellow rectangle and triangle cutout (6255958|44286) reappears here. The last appearance of this element was in 70829 Emmet and Lucy’s Escape Buggy at the start of 2019. 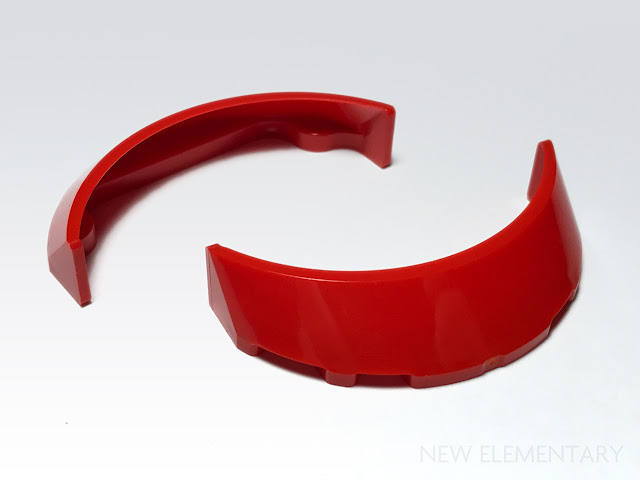 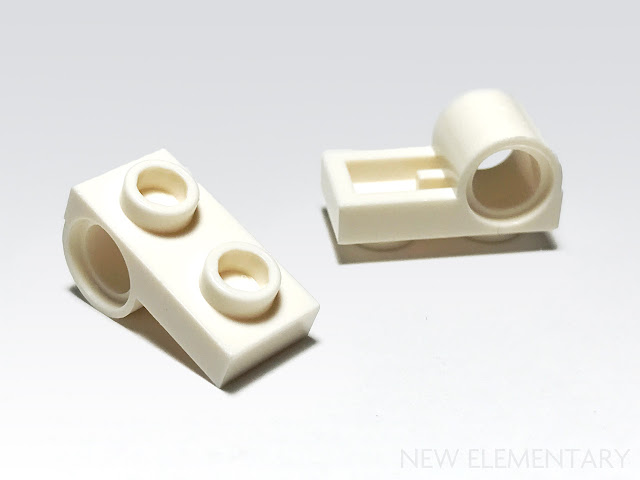 Last but not least, the set includes a White 1X2 plate with horizontal Technic hole on bottom (6232029|28809). This element has previously only appeared in 41168 Elsa’s Jewellery Box. 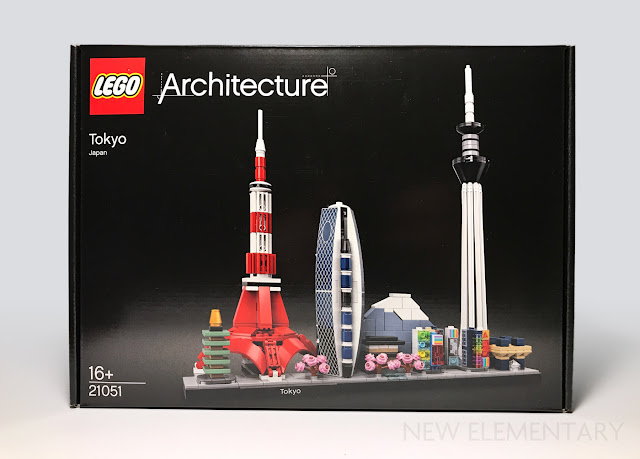 The kit is divided into two sets of bags. The first set of bags contains parts for constructing the base of the model and Tokyo Tower, while the latter contains the parts for building the Mode Gakuen Cocoon Tower, Chidorigafuchi Park, Shibuya Crossing, Tokyo Big Sight, and Tokyo Skytree.

Early in the building process, it becomes clear that the designer(s) have employed a variety of clever techniques to accurately capture the features of the original buildings. 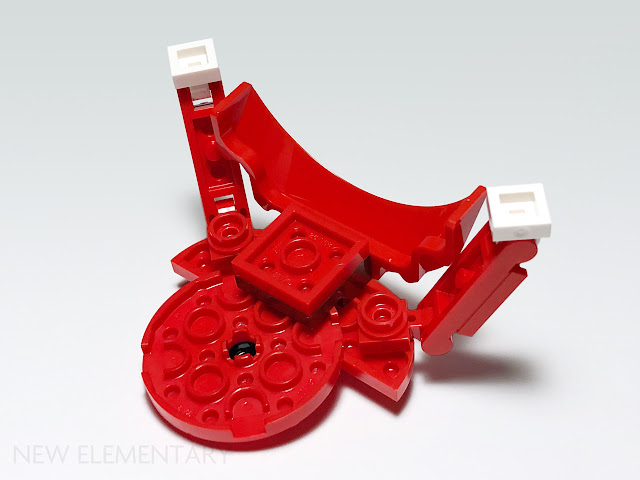 To create the distinctive arched legs of the Tokyo Tower, curved 2x6 windscreens are mounted vertically to a 2x2x2/3 brick with two vertical studs. To attach the support legs, two 1x1 plates with horizontal clips are attached to the bottom of a 2x6 rounded plate, whose corner gaps lock the clips at 45° angles. 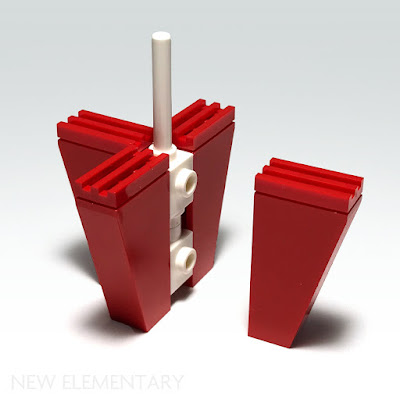 The tapered lower body of the tower is also constructed in an unusual fashion, with four inverted 1x2x3 slopes attached upside-down to a core of SNOT bricks, in order to minimize the number of studs visible on the model. 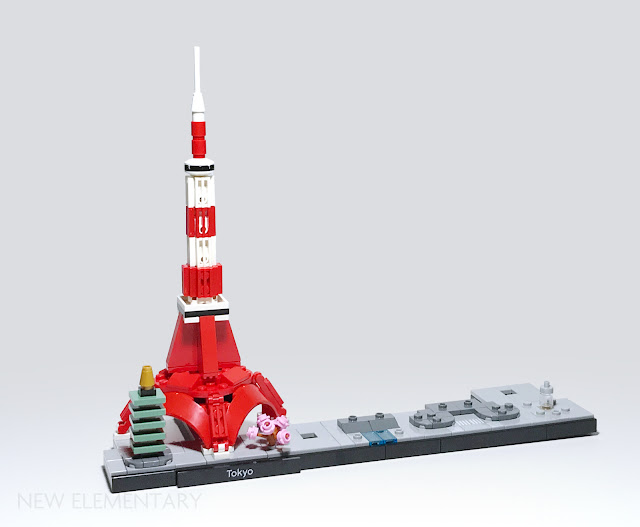 The remainder of bag one is straightforward, leaving you with a sleek-looking base and Tokyo Tower. 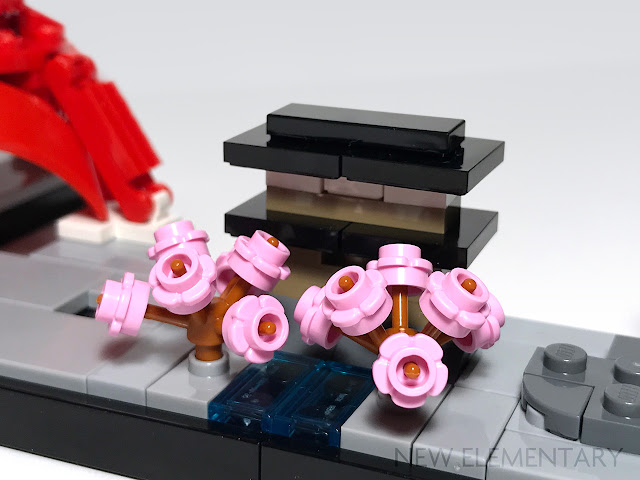 Bag 2 begins with the construction of Chidorigafuchi Park, which is characterized by its flowering trees, moat, and a section of the Tokyo Imperial Palace. 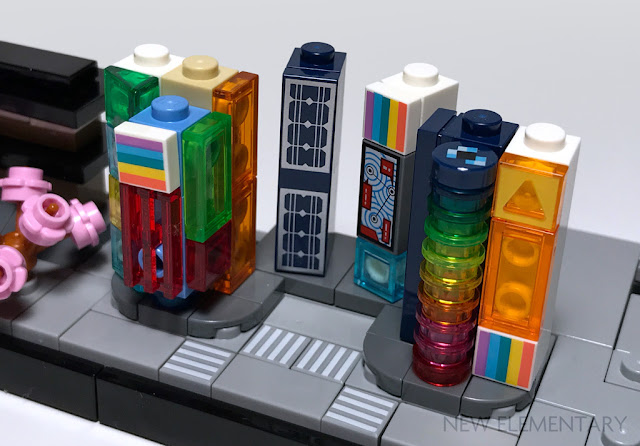 Next, Tokyo’s famous Shibuya Crossing is built. The buildings overlooking the crossing are assembled by applying tiles to 1x1x1 2/3 bricks with two studs on the side. The 1x1 tiles with four white stripes are used to create the crosswalks of the iconic scramble crossing. 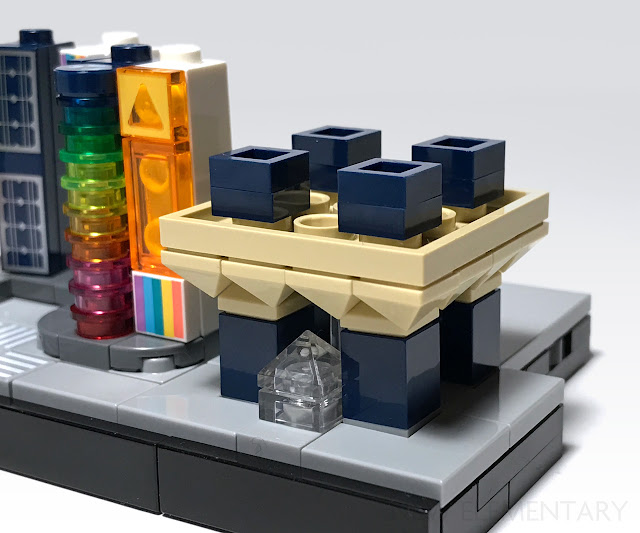 The Tokyo Big Sight building is the next landmark to be assembled. The building features four distinctive inverted pyramids which support the roof. To recreate this, the set designer has once again utilized a clever building technique. 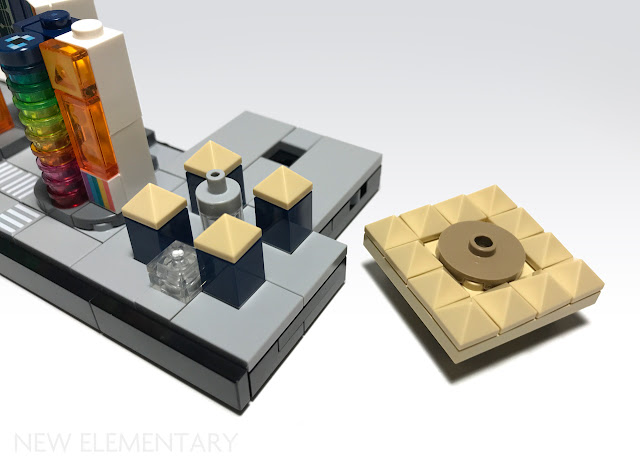 The core of the building features a 1x1 round brick with a 'nipple' brick on top, surrounded by four 1x1 bricks with 1x1x2/3 pyramid slopes. The roof, meanwhile, is constructed using a 4x4 plate with a 2x2 round plate with single stud in the center, surrounded by pyramid slopes. When these components are connected upside down (via the nipple brick), a 1/2 brick offset along both axes allows the pyramids on both surfaces to fit together and approximate a larger inverted pyramid. 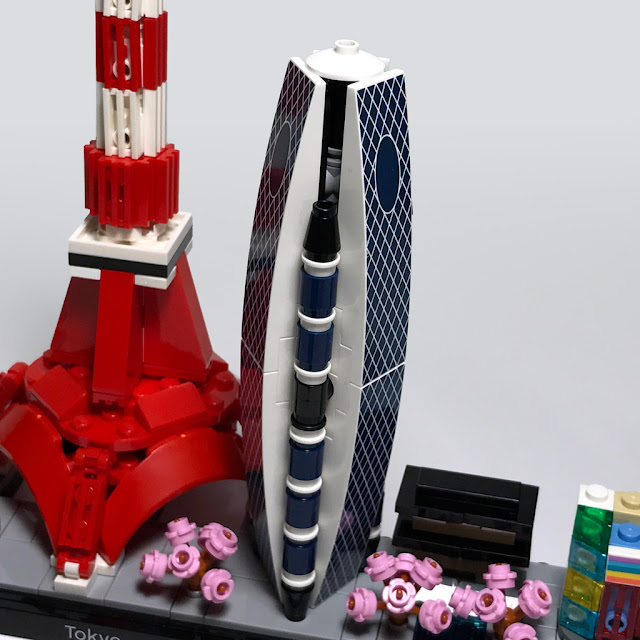 Following this, the Mode Gakuen Cocoon Tower is assembled. The building is assembled as three identical sides, which are mounted to Technic Y-connectors along a Technic axle which is attached to the model base. 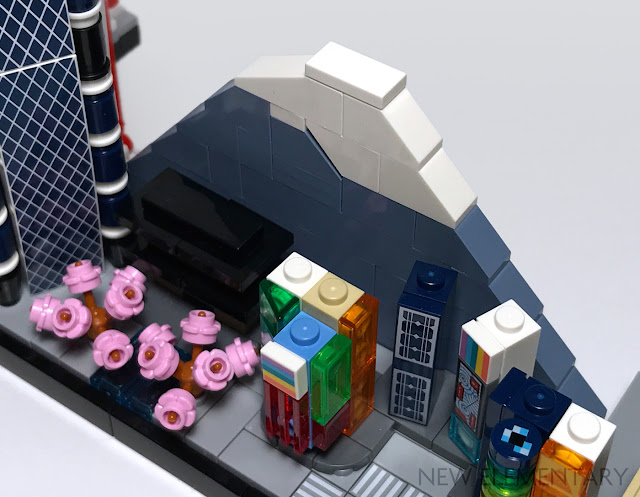 Along the back of the model, a miniature version of Japan’s iconic Mount Fuji is constructed from layered Sand Blue bricks and White slopes for the snow cap. Forced perspective is used to create the illusion that mountain rises over the city in the distance. 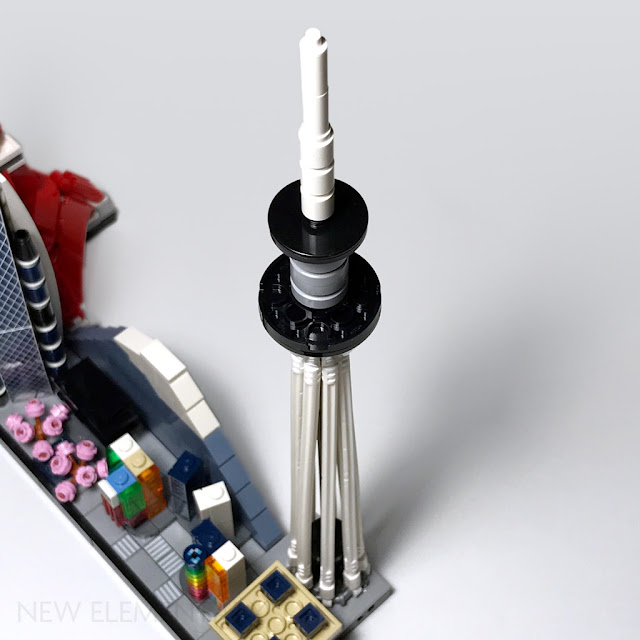 The last portion of the model to be assembled is the Tokyo Skytree. The building is constructed around a series of Technic axles which are later covered by flexible hoses representing building supports. Interestingly, rather than being attached on both ends, these hoses are attached only to the octagonal plate at the bottom of the tower. Towards the top, the ends of the hoses are fed into a 4x4x3 round cylinder with hole, which helps to keep the hoses bunched together.

The finished Tokyo model serves as a wonderful addition to the LEGO Architecture Skyline range, showcasing the sights associated with Japan’s largest city. 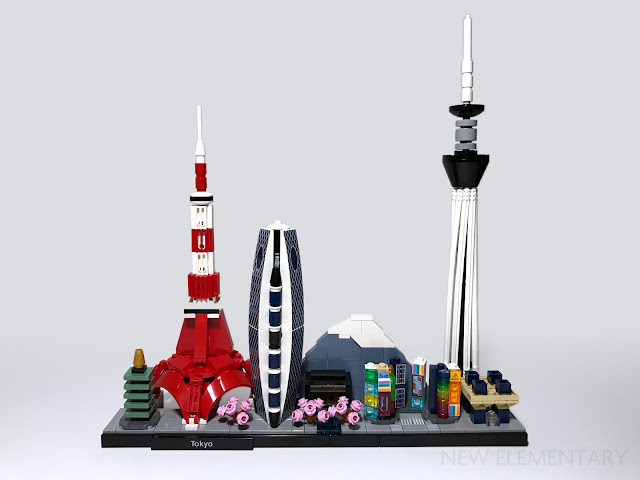 The model offers a number of useful new parts and an enjoyable construction process full of techniques and details to keep the interest of the builder. The addition of a brick-built Mount Fuji is particularly appreciated, offering a backdrop for the shorter sections of the model, and helping the finished model to stand out when compared to previous Skylines sets which have lacked natural landmarks.

My only hesitation in recommending the set is the retail price, which represents a steep price increase compared to similarly sized sets such as 2019’s 21043 San Francisco and 21043 Paris (read our review here).

Products mentioned in this post were kindly supplied by the LEGO Group. All content represents the opinions of New Elementary authors and not the LEGO Group. All text and images are © New Elementary unless otherwise attributed.
Posted by: Admin Posted on 12/29/2019 04:06:00 am
Email ThisBlogThis!Share to TwitterShare to FacebookShare to Pinterest
Labels: Architecture, Set review