In 2005, The LEGO Group released a short lived but fondly remembered theme called LEGO® Vikings. It had a limited run of only one release wave. These sets featured fantastical Viking minifigures and mythological beasts such as giant dragons and wolves… but mostly dragons. 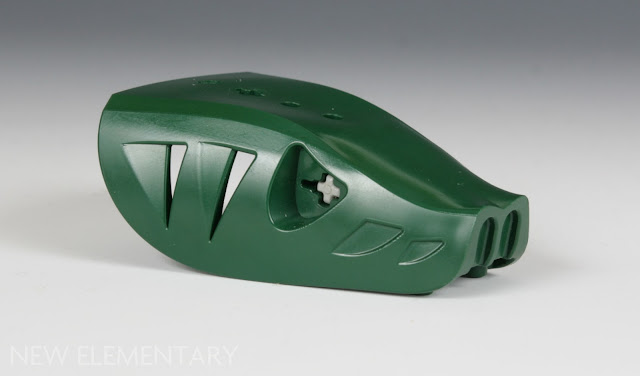 One of the largest sets of the theme was 7018 Viking Ship Challenges the Midgard Serpent. It contains 564 pieces, 6 minifigures, and one mean-looking monster, making it the theme’s most iconic playset. While it contains numerous fun and unique LEGO elements, the focus of this article is the element Midgard Serpent Head in Dark Green (53455). The element is appropriately named, as it is unique to this set.

Connection points and geometry of the Midgard Serpent Head 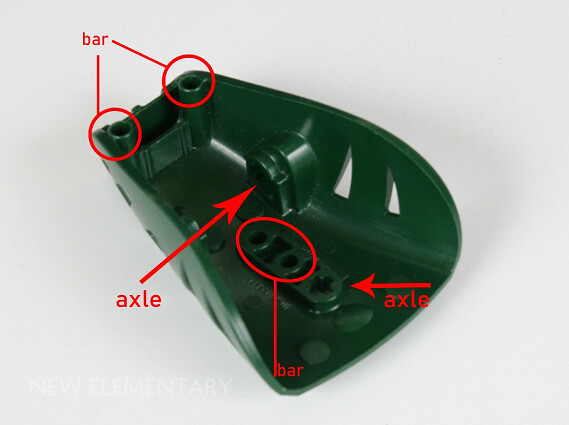 Like many highly-specialized Constraction LEGO elements, it does not fit perfectly into the standardized geometry of the traditional LEGO system. The back of the head is roughly 2 bricks high by 6 modules wide, the snout is roughly 1 brick high by 3 modules wide, and the length is roughly 8 modules (or six stacked bricks). 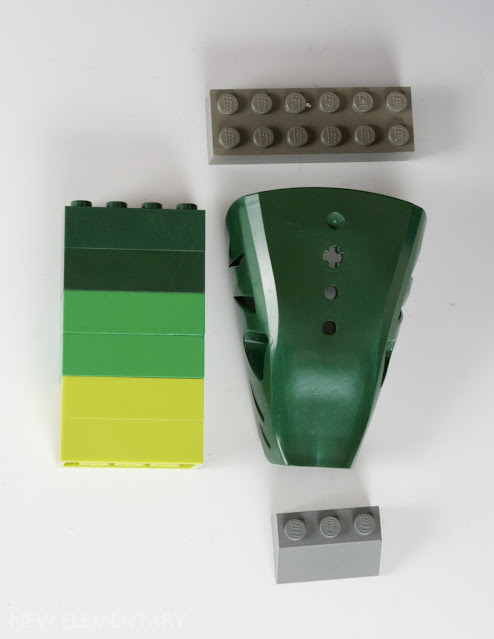 Building with the Midgard Serpent Head

Though rarely seen, the element can be easily and creatively implemented into Constraction MOCs due to its unique, organic shape as well as its axle and bar connection points. As a builder who specializes in Constraction I want to showcase the potential of the element with a handful of machine and monster MOCs.

Sometimes the most effective use of a LEGO element is the most obvious. As a devout believer in the K.I.S.S. principle (Keep It Simple, Stupid) I want to begin with MOCs that use the element as what it was intended to be, a serpent’s head. 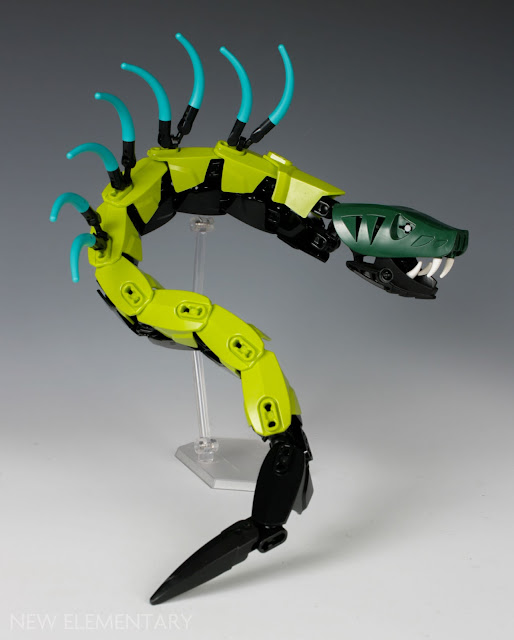 The first of these MOCs is constructed of two simple, flexible, sturdy chains of CCBS bones and shells with some dino tail ends for some added flair. The Midgard Serpent head connects via the axle hole in the eyes, though I substituted a 3L axle for a 3L bar for a more beady-eyed look.

The bottom jaw is the head of 8738 Toa Hordika Whenua. I chose this as a reference to a dragon from a pre-production Vikings set that shows this element in Dark Red, though it has only ever been released in Black. To see pictures of the set plus other LEGO pre-production sets including more Vikings, take a look at this Eurobricks thread. If you’re looking for inspiration on your next fantasy MOC or are simply interested in LEGO history, you won’t want to miss these.

Next up is this wacky racer inspired by themed miniature collectible toy cars and The LEGO Group’s own Chima Speedorz. 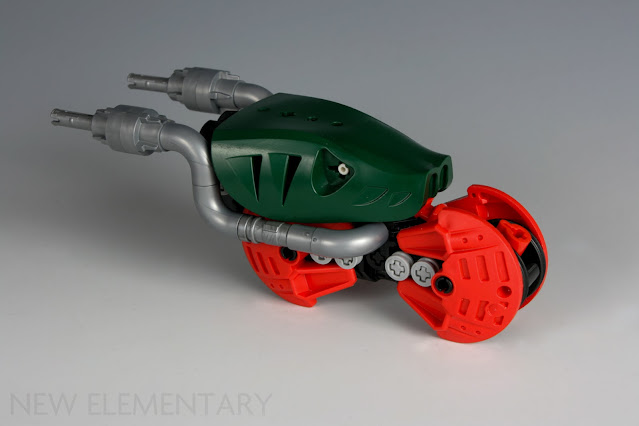 The Midgard Serpent head is connected via two Tile, Round 1 x 1 with Bar and Pin Holders, commonly referred to as inkwells, on the top of the vehicle. One in a bar hole and the other in the axle hole. Inkwells were also used to accentuate the eyes of the serpent head. Despite being opaque, the shape of the serpent head vaguely resembles the area that a driver of this machine may sit.

Anyone can use a snake head as a snake head, but what else can you do with one? Continuing with the animal theme I have two insectoid MOCs that each use the Serpent head. 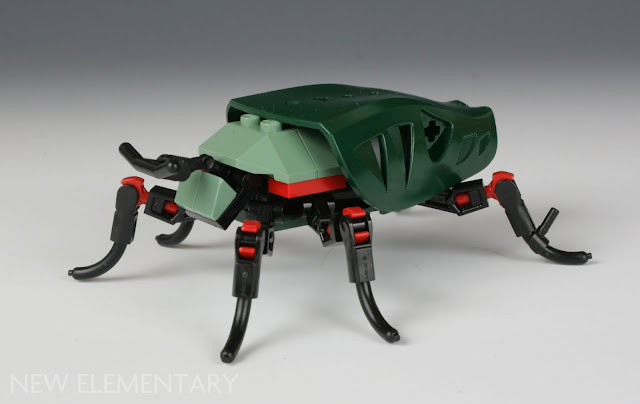 The first is a simple beetle MOC. Much like the previous MOC the serpent head connects with two inkwells connected to a Slope, Curved 2 x 2 x 1 Double with 2 Studs.

The head when used backwards strongly resembles a beetle’s shell with its wings closed. I was inspired by Korean community member Youn Hongjun who had a scrapped WIP using the serpent head for the same purpose. 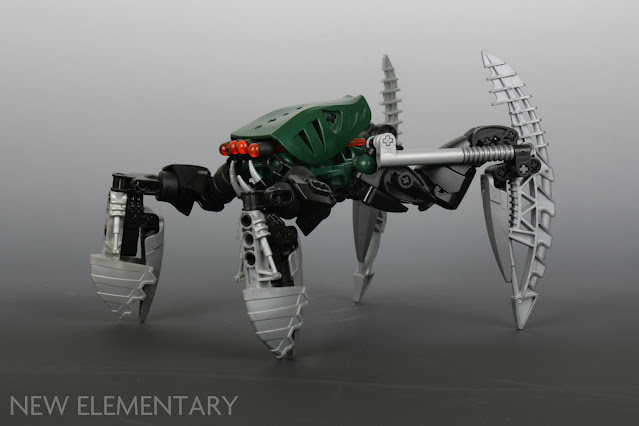 The second of the two bug MOCs is one of my earlier works. The not-so-cleverly-titled Aranya here also makes use of the backwards serpent head to create a more fantastical insectoid monster. Unlike the beetle, the serpent head makes up the entirety of Aranya’s body, with just enough room underneath it for 4 SW Ultrabuild Projectile Arrow, Bar 8L with Round End (Spring Shooter Dart) to make up the eyes. 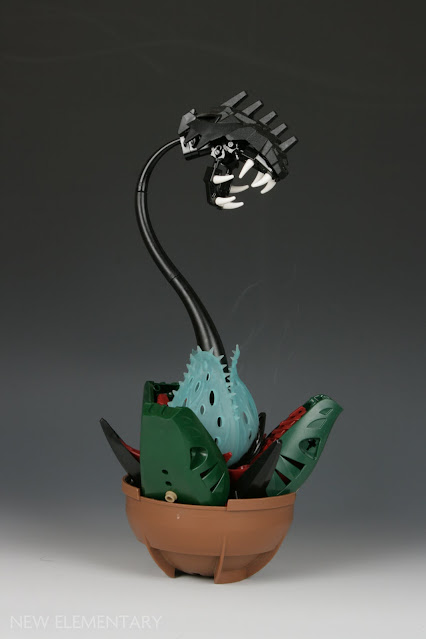 Finally, Henrietta the Potted Plesioflora uses 3 Serpent heads as large leaves at its base. Inside the leaves are a myriad of dark red parts to help compliment the color and add a more monster-ish biological feel to the MOC.

Of course, there are many more creative ways that you could implement the part into your own builds! In this gallery you can find more inspirational ways to use it in your next creation.

Posted by: Admin Posted on 11/30/2021 10:00:00 am
Email ThisBlogThis!Share to TwitterShare to FacebookShare to Pinterest
Labels: MOC, Old parts, Technique