Eero Okkonen (@eerookkonen) reviews the upcoming LEGO® Ideas 21329 Fender Stratocaster set, which will be available from 1 October 2021 priced US$99/ £99/ €99/ AU$159.99/ CA$139.99. Buying this set? Consider using our affiliate links, New Elementary may get a commission: USA LEGO Shop | Australia LEGO Shop | UK LEGO Shop/for Europe 'Change region'. Products in this article were provided by LEGO; the author's opinions are their own.

Usually, LEGO® Ideas products begin life as projects on the Ideas site, gain 10,000 votes within a given time frame, go through the LEGO Group review phase and are then converted into sets by employees. Gaining the votes - no small task on its own! - far from guarantees the product will be made; in the June 2021 review for example, only one of 25 projects was selected.

However, the process was different for Ideas set number 37. In spring 2020 the Ideas website hosted a music-themed contest with fan voting. Tomáš Letenay's Fender Stratocaster project was chosen from the rank seven, surpassing band-specific, minifigure-scale and large figure-based projects.

The rest of the process was apparently similar to usual Ideas products: The project was heavily overhauled using some brand new parts, which New Elementary is happy to introduce to you today, along with a closer look at this musically-themed set! I am by no means a guitarist, but I like listening to rock'n'roll on records or, preferably, live at gigs. I've also built some guitars on a similar but slightly smaller scale, which are currently spending their very last days in LEGO House, as part of my Circle project. 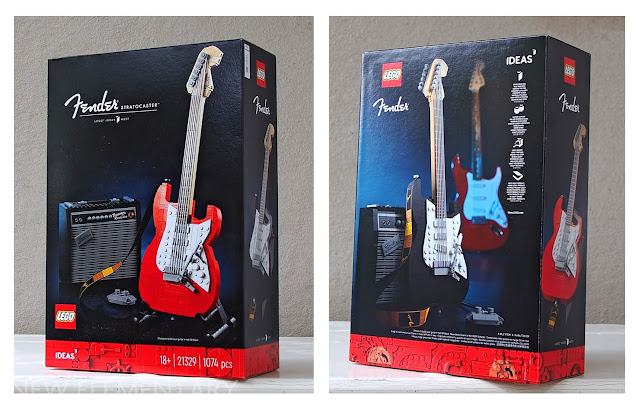 Tomáš's project also features a Fender-branded amp, guitar stand and a foot switch, which have been re-designed for the 1074 piece set. In addition the set has pieces for both a black and a red body of the instrument - but obviously only one neck, headstock and strings. 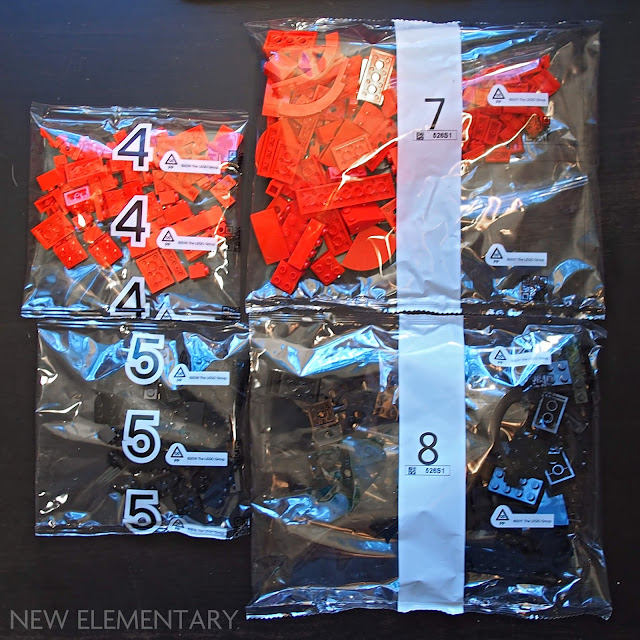 A builder of the red guitar picks bags 4 and 7, and any Batman looking for a black Stratocaster takes 5 and 8. This means a good pile of extra parts, some which are rare and even brand new!

Along with the instructions and 12 numbered bags the box includes two sticker sheets (one with the usual ones and one with a brick-built Fender logo to be applied to your guitar case), two pneumatic tubes and an additional bag with the strings and a bunch of Zipline 22L with 2 Connectors - Flexible (6210590|27965). There are five of the latter, and one of them is extra – likely included to prevent human errors given these bags are filled manually. 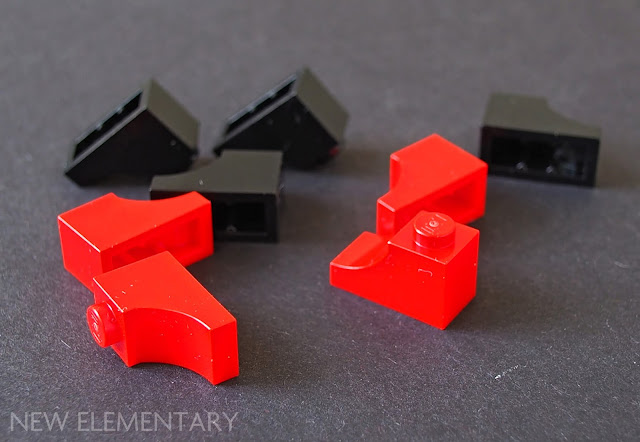 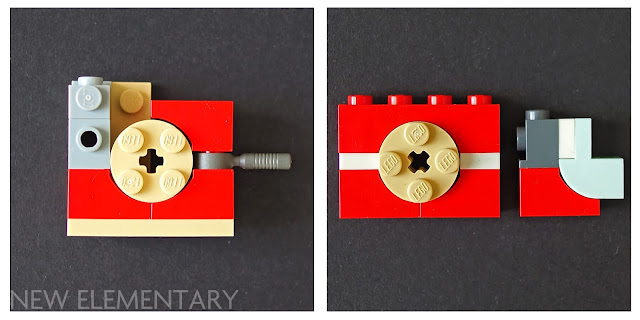 The curve is not a perfect quarter-circle, as the lip is one plate thick and there is also a short, straight drop before the curve starts near the top - a little less than half a plate thick. The resulting curve is almost the mirror of a 1 x 4 x 1 arch, with very small gaps; it looks pretty good with a 2 x 2 round brick infill, but the most pedantic builders might be irritated!

I'm very happy with this piece overall. Concave curves are as prominent in organic character builds as convex ones, which are common in the LEGO curved slopes family. Arch pieces can be used upside down, but their hollow undersides often create jarring and severe patterns. This piece will enable soft, flowing curves. It looks like a good shoe for Miniland  figures, too. Here, they make the curves on the guitar's body, which means that 4 are left over - depending on which colour you choose.

The pneumatic hoses are used as the power cords between the guitar, amp and foot switch. They look authentic _ even getting dusty like real rubber-covered cables! – but are too short for any realistic stage activity... more on this later. Nevertheless, it is nice to get two long hoses, as they are useful and uncommon. It feels logical that the piece was re-introduced for the NES set in 2020, and now re-used here. 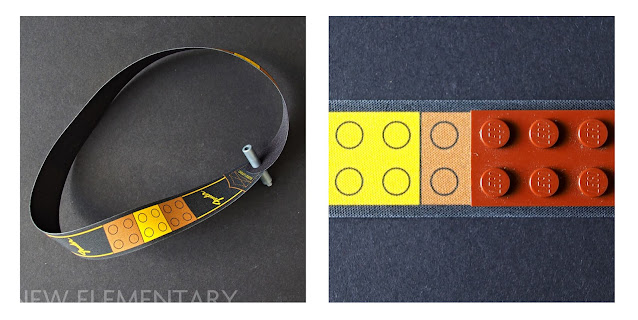 More interesting is the strap: a new textile piece, packed separately in a nice roll in a small cardboard box. It is 48.5 modules long and has holes a little wider than a 3.18mm bar at both ends. The printed pattern of LEGO studs is 1:1, meaning the strap is approximately 2.4 modules wide. Although the texture looks a bit pale on my close-up photos, the quality is good. The material is close to that of old stiff minifigure capes - like the ones that appeared on the CMFs Elf archer and Spartan warrior - but feels thicker and stronger.

An electric guitar is essentially a stick to hold the strings which are, at least from the player's perspective, the most important part of it. I was glad to see that the strings are actual cords; not printed nor made with grille tiles or similar.

They are String with End Studs 41L Overall (14226c41); this piece has been around since 1996. The instruction manual states that the set includes 1x element 6371713, which is a single ID number for the set of 6 strings. However, the colour for the piece is not entirely clear. The round plates are Light Bluish Gray, a new colour for this part, but the strings themselves have an authentic silvery gleam on them. They are closer to light Pearl Light Grey (simply Silver on official colour chart) that preceded Flat Silver around 2006-2010. However, it is probably pointless to compare the colour to usual parts as the strings themselves are not ABS.

The pieces are lovely and look very useful, perhaps for such varied applications as Samwise's beloved elven rope, spider webs or power cables. I'm sure MOC builders will find breathtaking uses for them.

Similarly to the new inverted curved slope, there are 8x Brick Curved 1 x 4 x 3. Again, 4 are spare depending on your chosen guitar colour. 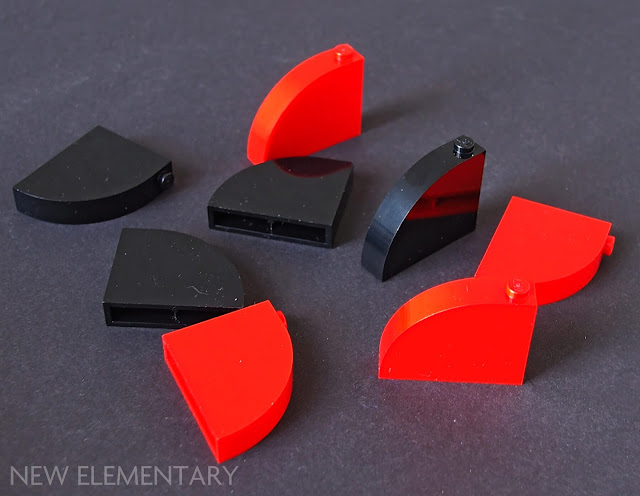 Inthert took a closer look at this piece on his review of 10271 Fiat 500 where the piece first appeared. 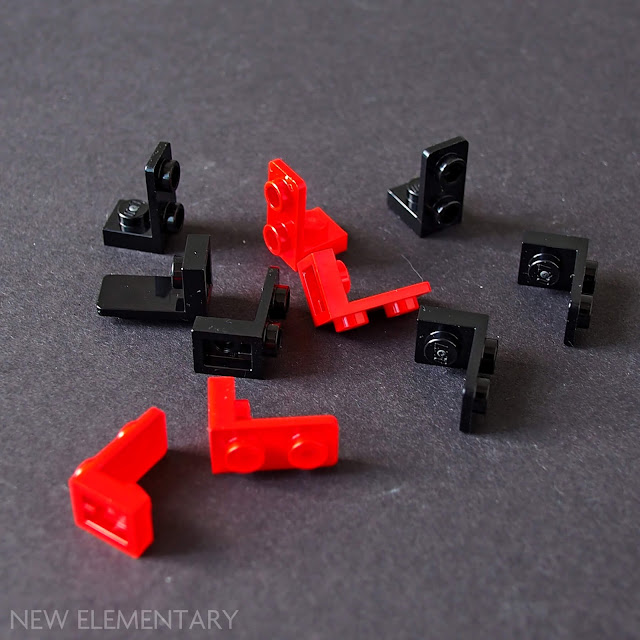 This new bracket is very useful when studs are needed within tricky nooks. Two black ones are used on the amp; 4 are used on the guitar and the other 4 are for the colour-change. 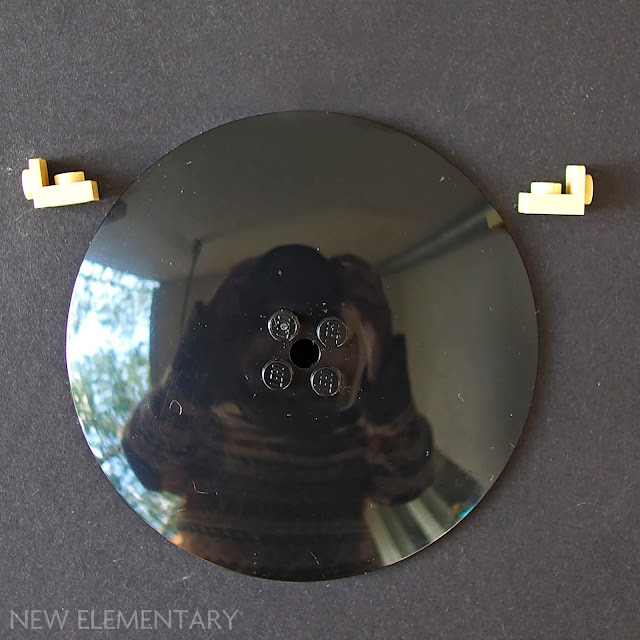 These recolours are both very welcome. Dishes are pleasant and beautiful pieces, and this black one will make a great brimmed hat for some lucky character build. Small brackets are universally useful, and these Tan ones will definitely solve some tricky challenges in character building. 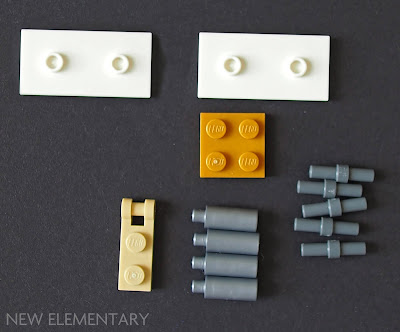 The new 2L bar with a stop ring is an interesting piece; I think I would have been more excited about it 10 years ago than now. Time will tell if replacing the 1L bar of a T-piece with a ring will prove useful or not. At least the ring fits into an anti-stud, thus allowing some 180 degree SNOT possibilities. The piece has plume-sized holes in the ends, but the centre is solid, making this useless as a pneumatic system piece.

This set uses both printed and stickered parts. 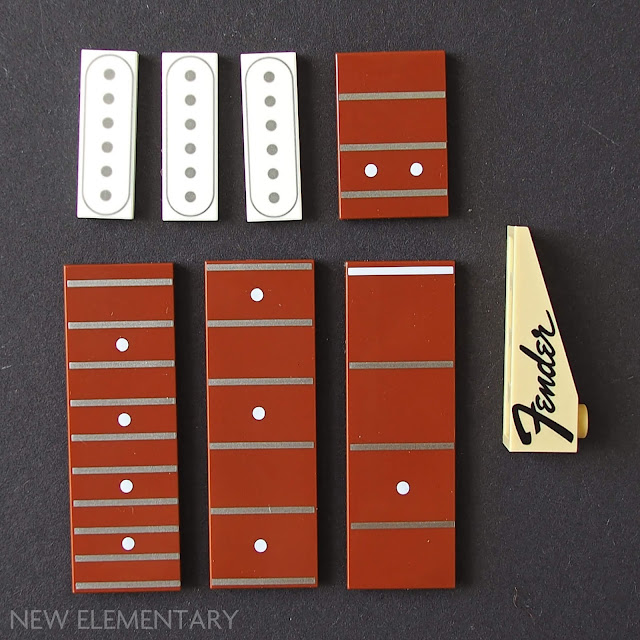 I'm glad to see the fretboard printed, as it would look bad if misaligned. The 2 x 3 tile could make a retro robot face, the pickups are quite universal (buttoned shirt maybe?) and the 1 x 4 slope could make a rad tattoo on a figure MOC. 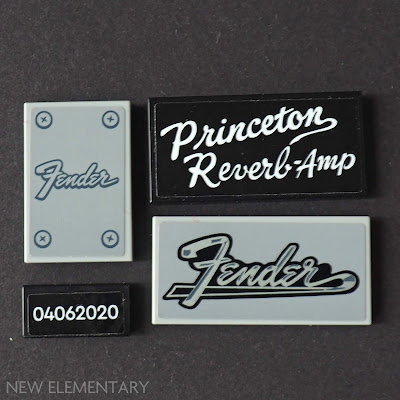 The stickers are applied on regular tiles. They're okay, as perfect alignment is less important than on the fretboard. The 2 x 4 ones would make good advertisements on minifig-scale music stores. 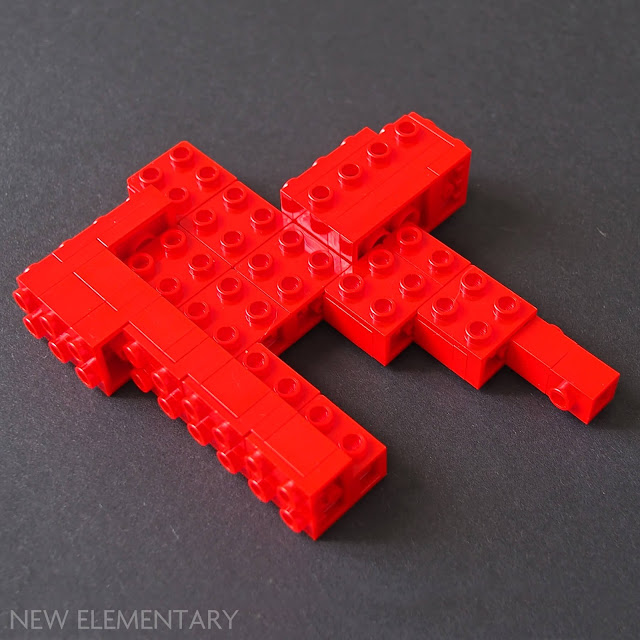 As a building experience, 21319 is on the easier and more relaxed end of the scale of 18+ sets. There is a lot of SNOT, and applying the strings is unusual, but the techniques are simple. There is a lot of monochrome building though, as one phase features only red or black bricks - with a beautiful SNOT slab as a result! 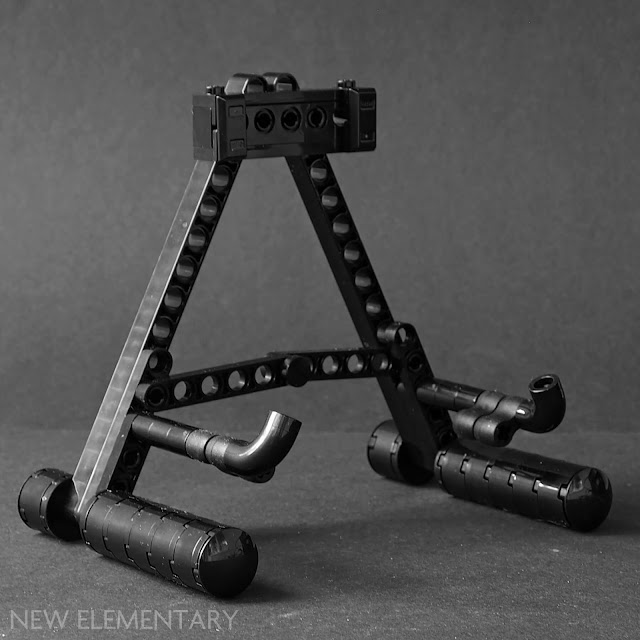 The first object finished is the monochrome black guitar stand, which is simple and authentic. Rubber 1 x 2 liftarms give it some friction. 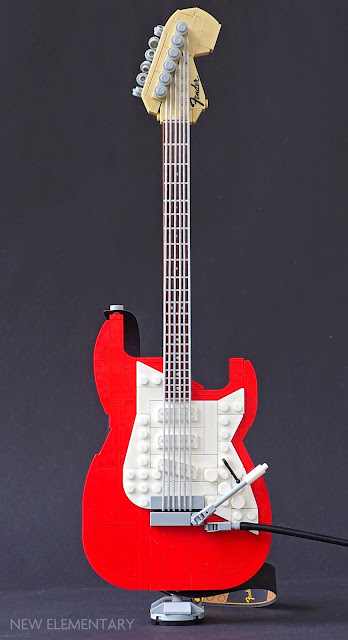 The second object is the star itself, the Fender Stratocaster. Here it is in its red glory, balanced on the footswitch for a facade view. It looks great, the fretboard and the strings especially. The headstock is sculpted nicely and the body uses the new curved parts to great effect. However, as my eyes became accustomed to it, I began noticing some shortcomings: The white area of the body is too angular and aggressive - probably 1x1 quarter round tiles could have been used for a softer effect? - and the headstock feels a little oversized, especially the blob on the end (though there seems to be different Stratocaster headstock variants). 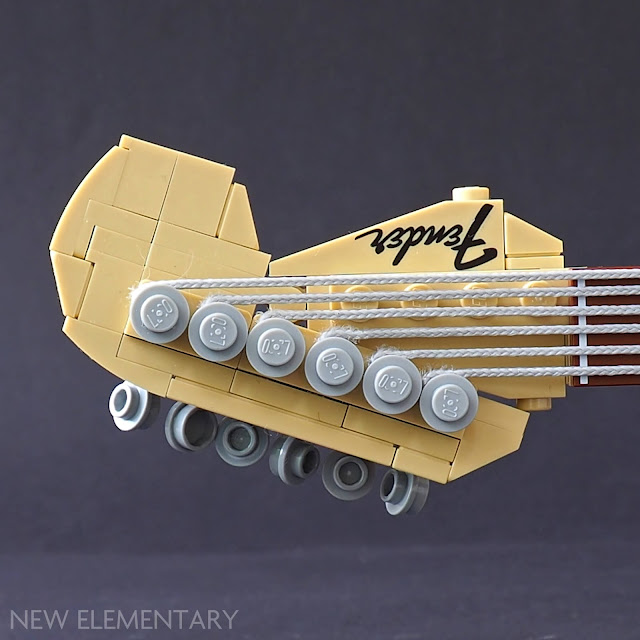 On the other hand, it would probably have been almost impossible to have six strings in a row on a smaller headstock, so it barely feels like a shortcoming. The headstock itself is well designed. The rightmost string (low E) is very close to the edge of the fretboard and sometimes slips off, but is easily restored. 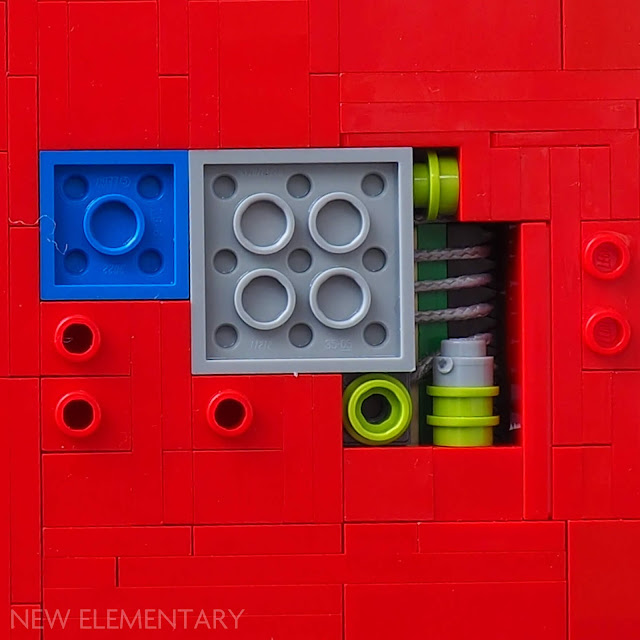 The string ends are hidden inside the redness (or blackness) of the body, behind an easily removable white panel. They are evenly spaced by a Technic Gear Rack 1 x 4 (3743). 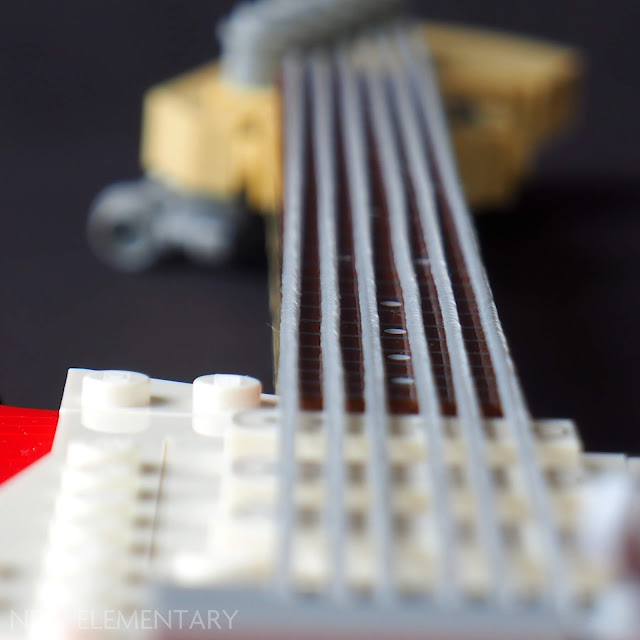 Peering along the fretboard, it looks just like an actual guitar! But that's not all. Half if not more of the parts are used on the amplifier, a Fender '65 Princeton Reverb, a classical rock gadget I did not foresee as an official set. Expecting a boring black box? Do not fear. 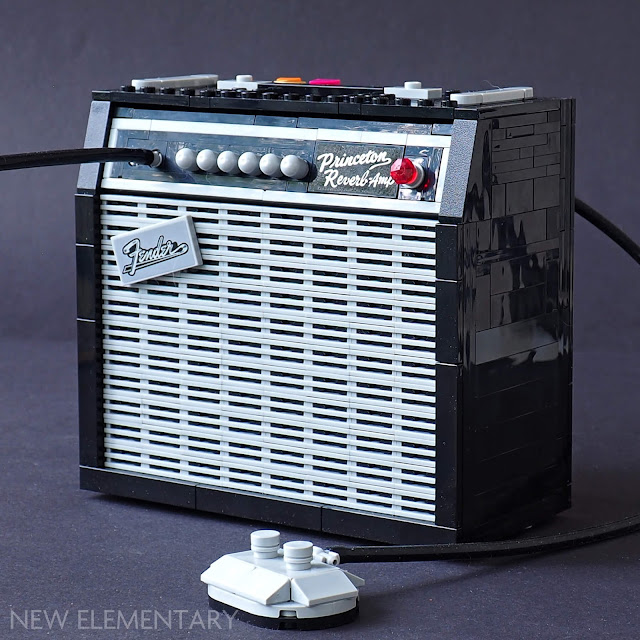 The main face is sober and clean, with a lot of grille tiles to apply to the panel, with its sticker and Fender jewel. The dials lack their labels (volume, treble, bass and so on) and the buttons are not very close to the original, but they look good on the slightly angled panel nevertheless. The Fender logo, stickered on a 2 x 4 tile, bugs me more – but a very specialised mould would have been required for an accurate replica of the logo. The footswitch feels clumsy with its angular cheese slopes and I feel that some macaroni tiles or even macaroni tubes could have achieved the shape better. 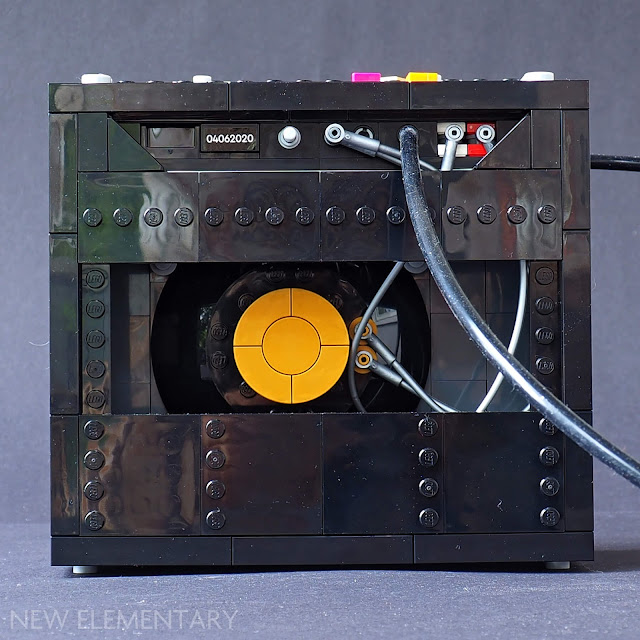 The rear features more detail. I was surprised by this, as it was not at all featured on the box art. Neither did I know that the back of an amp looks like this, as I've mostly seen them on the front, from the audience. Turns out it's very close to the real Princeton amp design. 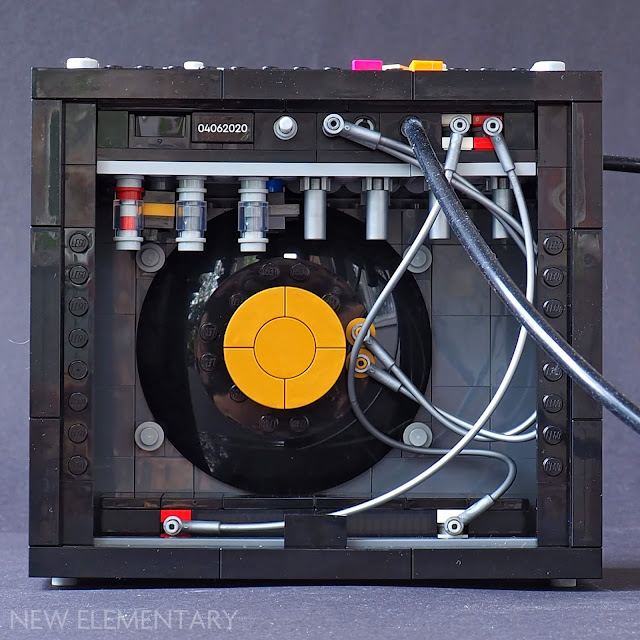 Removing the back panel reveals more fantastic detail. This is where the 12 x 12 dish and zip lines went. The dish is not connected but suspended authentically between 1x1 round plates, and there is a large round hole, made with arch pieces, between it and the grilled front plate. 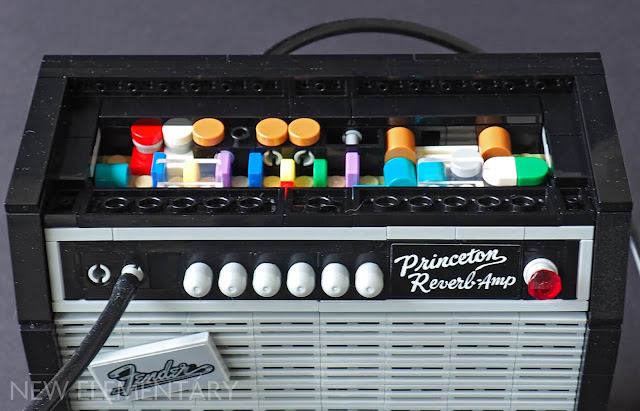 That's still not all though. The top panel can be removed too, exposing the electric circuits and red-and-white connections familiar to anyone who has dabbled with sound systems.

Who would have guessed that lipsticks make such good cable jacks? The friction on this piece has been criticized in the past, but it works well here. 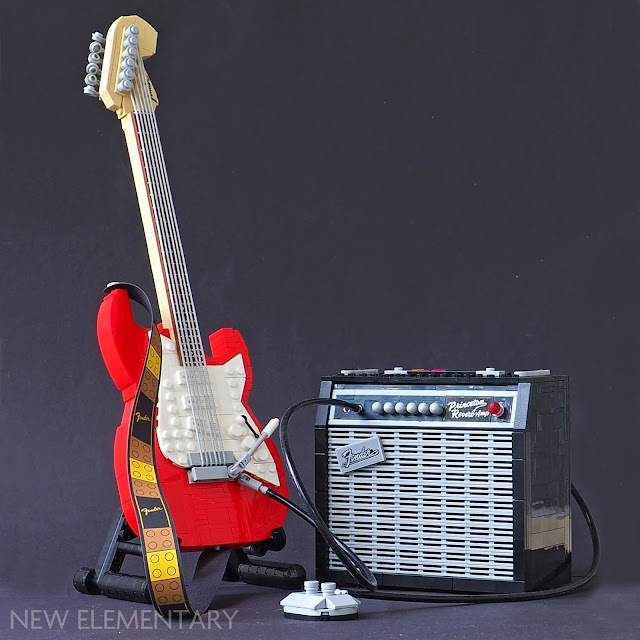 The finished set is a satisfactory display piece, ready to rock and roll. But can it be played? Come back tomorrow for the answer to this burning question in part 2, when I get a little help from an old friend and give my final verdict on this LEGO Ideas set! 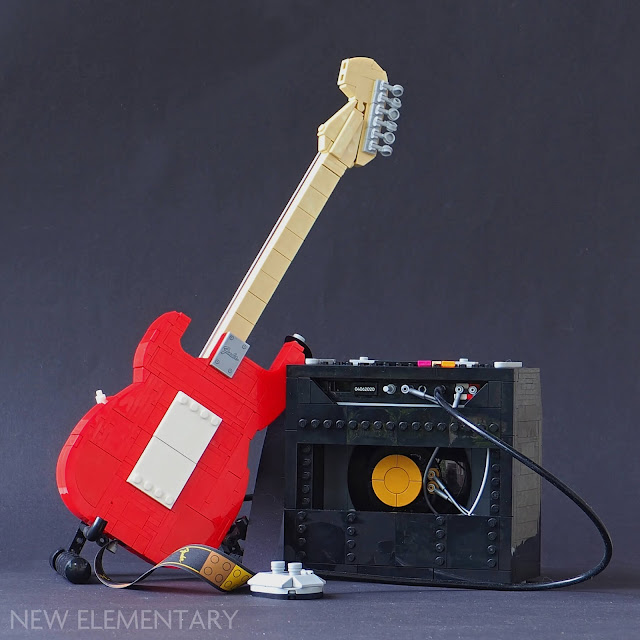