Tim Goddard (@tim_goddard928) teaches you his building techniques using the LEGO® minifigure utensil, binoculars (Design ID 30162) and shows ways he's utilised them in his own MOCs.

Minifigs got a whole new perspective on Legoland back in 1998. That was the year part 30162 first graced their clawed hands across Town (this was before the conurbation grew to become City) and the new Adventurers theme. The binoculars also appeared in three Belville sets in their freshman year, although they looked a bit more like opera glasses in the hands of these larger figures. 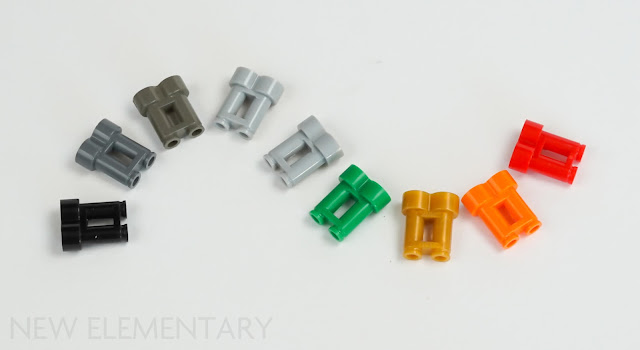 For the first few years the part was rather monochromatic. It was released not long before the infamous  colour change era, and so it only appeared in Grey/ Old Light Grey in the original run of the mighty set 10030 Star Destroyer. In theory I should have some in this colour as my Star Destroyer was long ago parted out into my collection, but for all my searching I could not find any. You will have to forgive me, dear reader, for putting two Medium Stone Grey/ Light Bluish Gray ones in my binocular colour curve collection.

Then things started to colour up. It appeared in Dark Green/ Green in the Toy Story set 7595 Army Men on Patrol. This was another somewhat infamous event in LEGO history; the set clearly breaks one of TLG’s primary laws, thou shalt not produce sets that depict modern warfare. It breaks it in a rather Inception-esque way; A reproduction of a CGI rendition of a plastic toy depicting soldiers from the Second World War. Maybe that many degrees of separation made it okay?

But we are here to look into this interesting part so let us refocus. Here is a list of each colour that binoculars have been available in and the year each first appeared.

Now we get to the good stuff: looking a bit at their dimensions and exploring how binoculars can be used in builds.

The part has many points and types of possible connection. On the base is an anti-stud for a standard connection to a stud. The main body of the binoculars comprises two 3.18mm bars half a plate width apart which allow it to be held by a minifig or in any other standard clip. The front ‘eyes’ come a plate width forward of the piece which otherwise sits in a 1x1 plate square.

The picture below left shows it’s not easy to stay 'in System' using plates with clips but there are many other ways to integrate the piece. 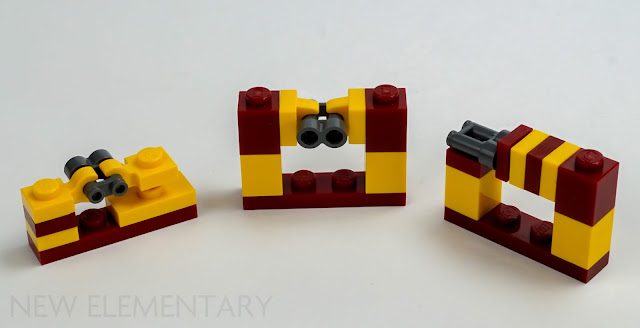 The eyes are a quarter of a plate wider in radius than a 3.18mm bar, which allows a recess which can accept any other 3.18mm bar. The overall width at the front of the piece means you have to think carefully about connection if you want to put several in a row right next to each other, the technique below using brackets and a Technic brick is one solution. 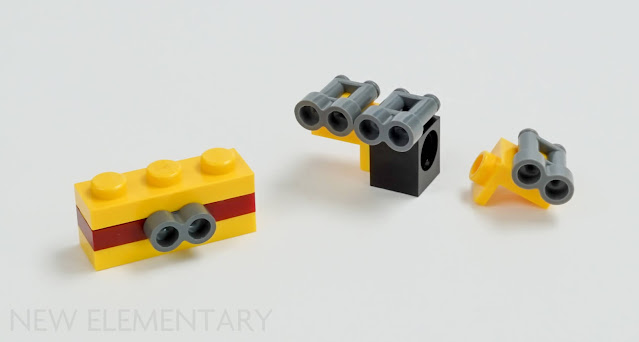 The end of the binoculars you would look into, being a 3.18mm bar, can accommodate an anti-bar attachment such as a lightsaber hilt. It also means you can connect one pair of binoculars to another. The clutch of this attachment is not super strong but it is good enough to be a practical technique. 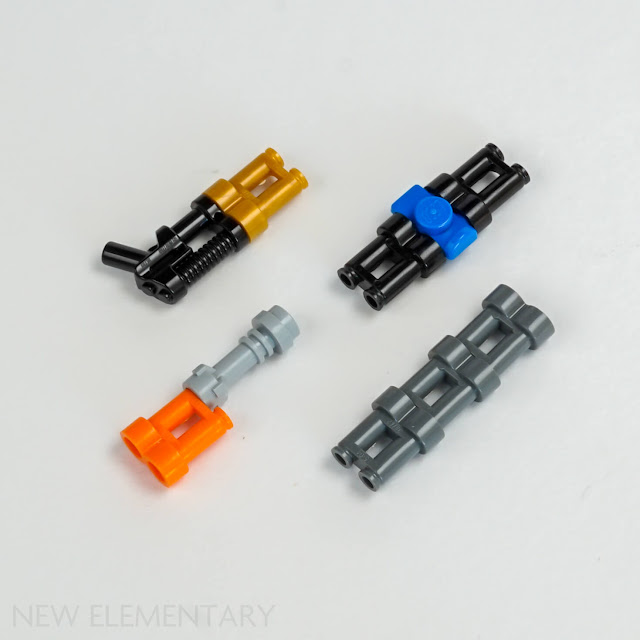 Above is a range of handy connection techniques between LEGO binoculars and other pieces. Regarding the first two: 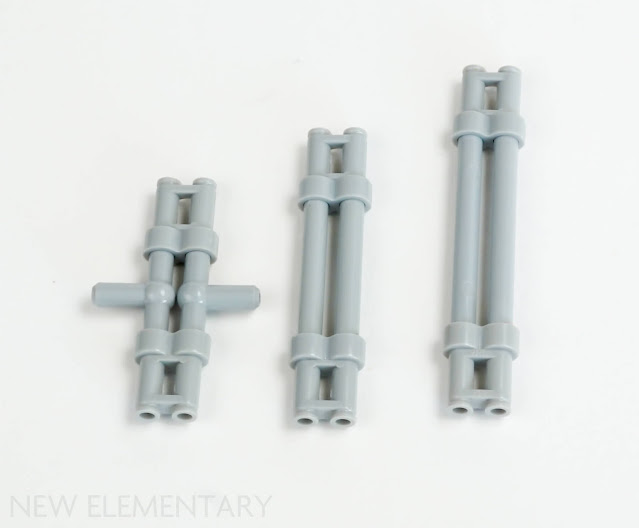 However of all the possible connections, the bar-accepting holes at the front of the binoculars is the connection that I use most often. Not only can you connect together bars in close proximity, you can also connect several together to make a track or walkway type construction, as seen on the right below. 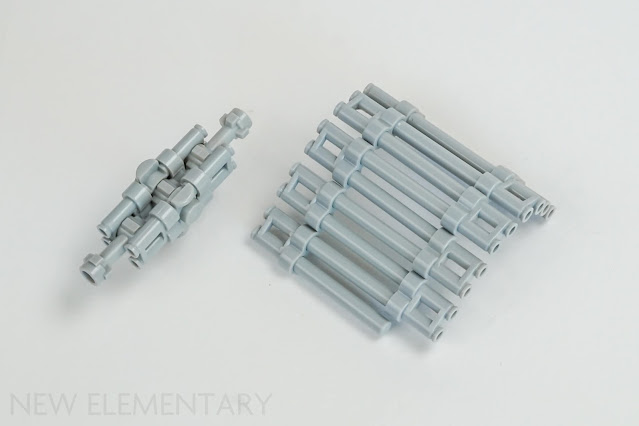 Meanwhile, on the left of the picture you can see what you can do with 4 pairs of binoculars, 3 Ninjago lightsaber hilts (Element ID 92690 Bar 1L with Top Stud and Two Side Studs) and two pairs of skates. 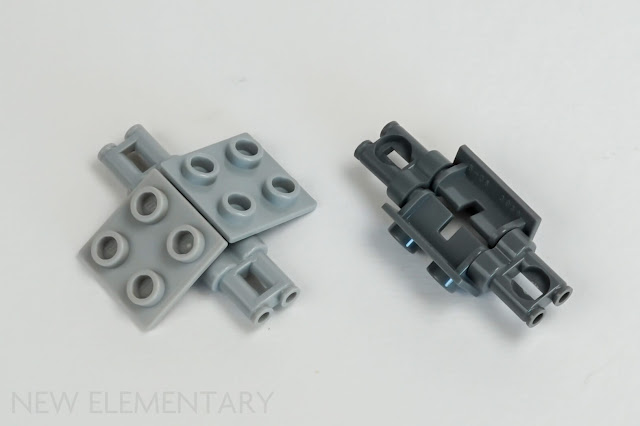 At this point let us take a minute to look at some other similar pieces. 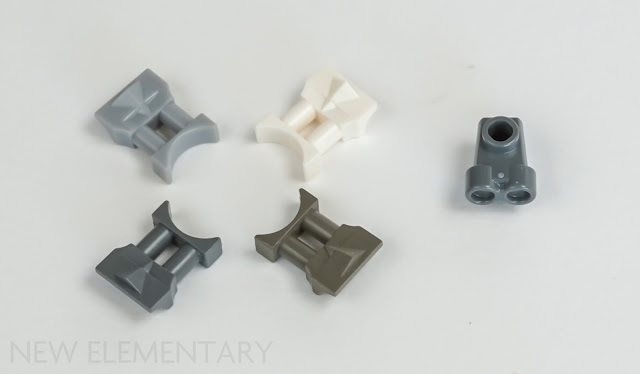 In 1999 the LEGO Star Wars line led to the production of minifig electrobinoculars (30304, above left); often just abbreviated to binocs by Star Wars nerds like me. They feature a nice concave back, to fit perfectly around the contour of a minifig head. The body of the piece has two 3.18mm bars the same distance apart as the regular binoculars and at the front you find a stylised light collector.

One nice thing about this part is that the bars are complete; the original 30162 binoculars have the stud hole on the back which means you cannot attach a clip at certain angles but the bars of 30304 are round all the way around which makes it possible to connect clips at any angle. The Binocs do fall down however as they have no legal connection points at the front or back which makes their practical use in building somewhat limited.

Even more limited in use are the recent Friends binoculars (52494, above right), also known as Binoculars with Stud on Top. This part is often used as a robot head. We explored the Friends binoculars piece in a previous Parts Festival and found that although it may appear at first glance that 3.18mm bars could be accepted at the front, it is just a tantalising illusion; bars will not fit. It does have a useful stud on top and anti-stud on the bottom, as well and a vertical hole for a bar, but it could have been so much more useful. It is almost certain that this was deliberate – any unusual connections that are likely to throw a young builder "off-grid" are frowned upon by the guardians of LEGO System.

To finish off this article it seemed appropriate to show some of the uses I have put 30162 to in my own MOCs. 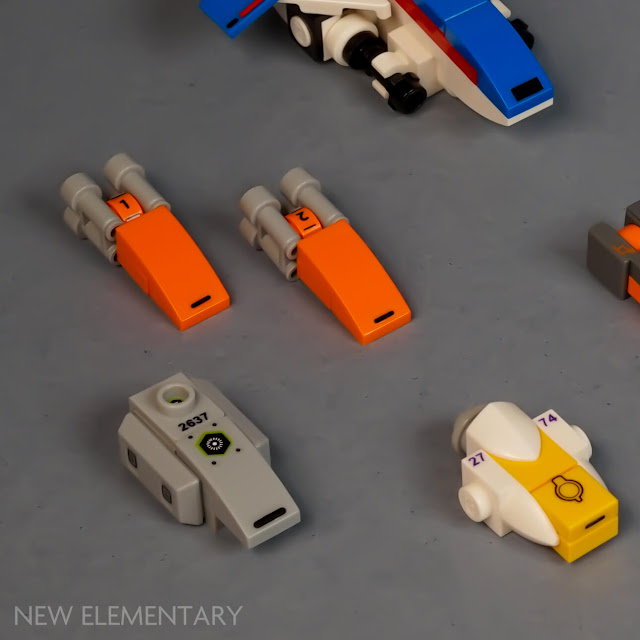 One of the most simple uses for binoculars is as booster engines on microscale spaceships as seen on these two orange shuttles. 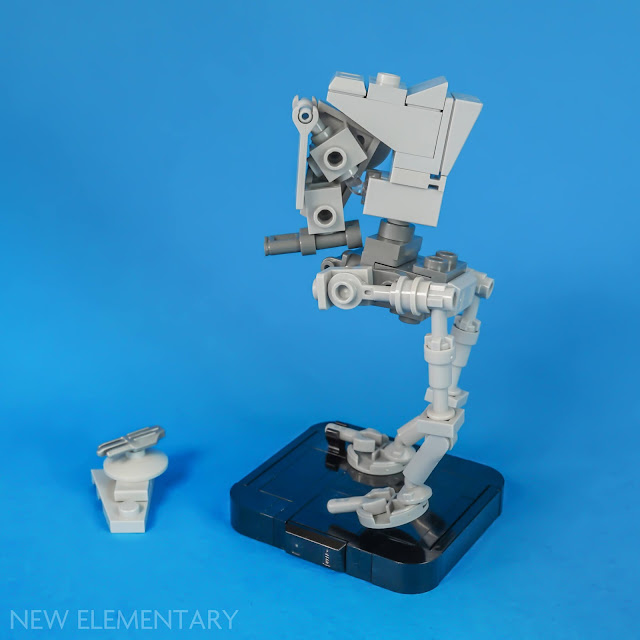 Another basic use is to put two pairs of binoculars together and that is just what I did to make the main blaster cannon on this mini AT-ST. 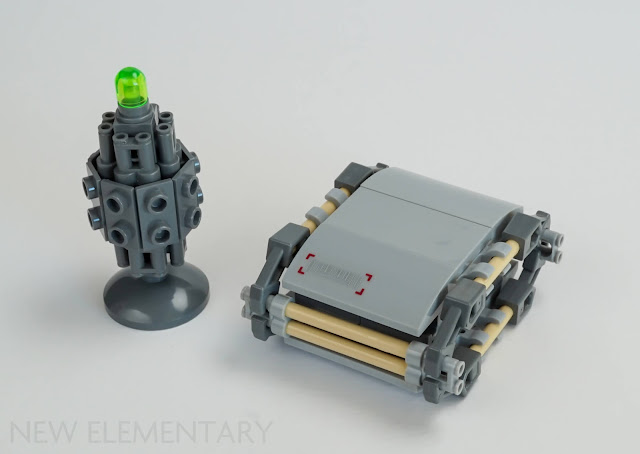 This beacon makes use of the connection with hinge brick tops discussed above and the cargo pod joins bars and binoculars. 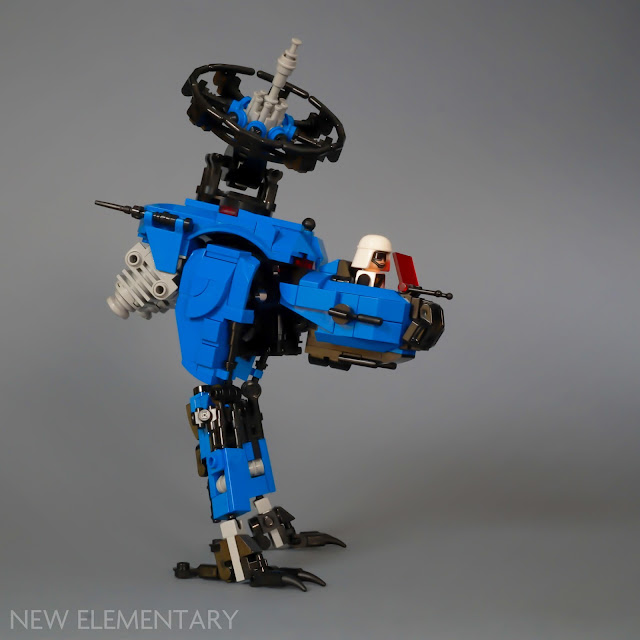 Finally, binoculars are a key piece in the reverse knee joint of this Space Police walker. The picture below shows just the knee joint – a surprisingly robust hinge. 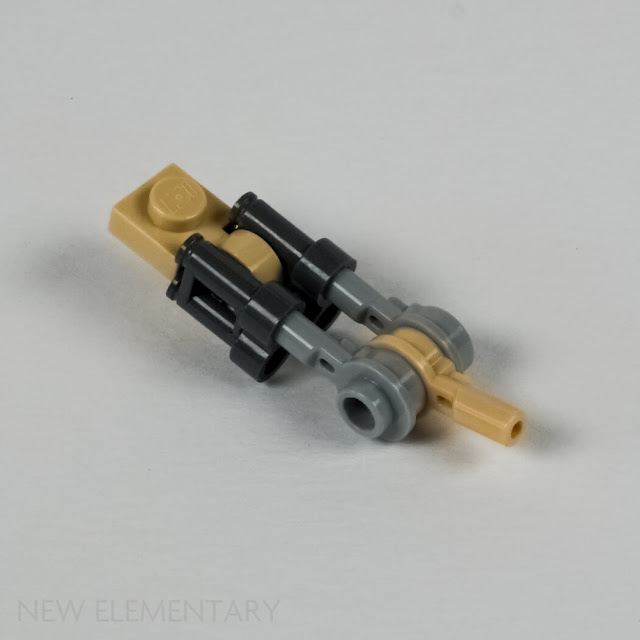 I hope this article has inspired you to look again at these humble minifig utensils and encouraged you to use them in your own builds.

Posted by: Admin Posted on 9/13/2021 04:41:00 am
Email ThisBlogThis!Share to TwitterShare to FacebookShare to Pinterest
Labels: MOC, Old parts, Technique