Tom Loftus (@inthert.lego) takes a look at the new, recoloured and printed parts you'll get in the recently revealed LEGO® Harry Potter set, 76391 Hogwarts Icons Collectors Edition. Editorial note: Although views expressed by Harry Potter's creator do not align with that of New Elementary, we continue to cover some sets for their parts. Read about our stance here. Products in this article were provided by LEGO; the author's opinions are their own. 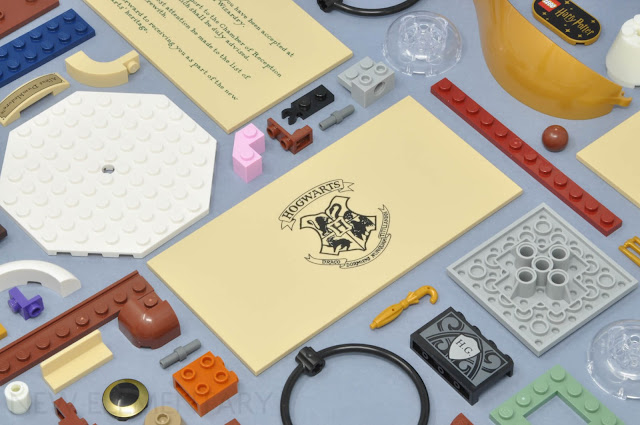 We’ll get to the build in Part 2 of our review but for the moment, it’s all about the parts!

76391 features two exciting new moulds, both of which are circular in nature. Note that with the lack of any official titles, I’ve done my best to come up with appropriate names for each.

Prominently used in the set to create the rounded lenses of Harry’s glasses are 2x 7 Module Wide Ring With 2 Axle holes in Black (6360034 | 79851). It has three connection point types: two axle holes at the ‘north and south pole’ with stud notches and of course the outer ring which is blessedly 3.18mm in diameter - huzzah! This makes it one of the more useful additions to the ‘Rounded parts with bar-sized attachment points’ family: 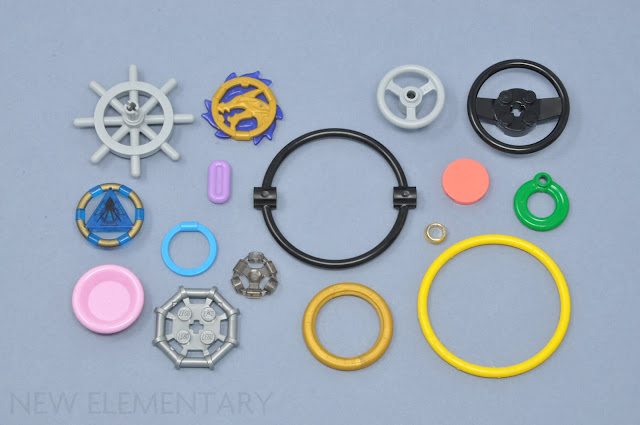 A 7 module-wide diameter means its closest relative is one that you may not know about (because it stays in its bedroom making no noise and pretending it doesn't exist): the Belville Hula Hoop, which humorously just has ‘hoop01’ by way of an ID on bricklink. It has only appeared in two sets from 1998 and 2003 and isn’t all that easy to acquire, so to have a new part with similar functionality is great. A decidedly less obscure relation would be STEERING WHEEL NO. 1 (Design ID 67811), first seen in 10274 ECTO-1 in 2020. It too features a ring mostly free of obstructions. 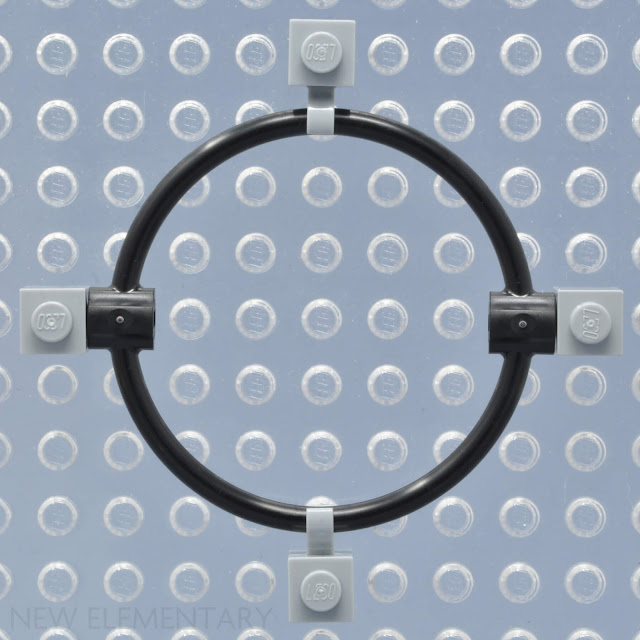 However, something that sets 79851 apart from the majority of elements pictured above is its sizable negative space. I can definitely see this being beneficial for builders wanting a sturdy framework running through something cylindrical, with the axle holes providing natural anchor points for Technic construction. Similarly, builders after intricate detailing on the inside of circular structures would have free reign of options without negotiating wheel spokes or cross beams. 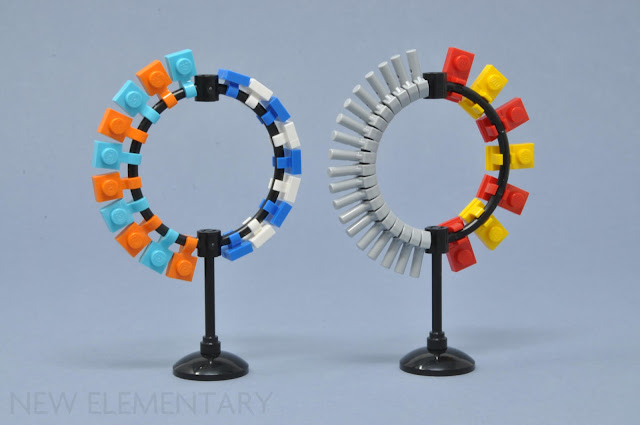 But as alluded to earlier, I suspect the most appealing characteristic to moc builders will be the ample space to affix clips around its circumference. I selected some common types to demonstrate how many of each can fit on each half. Castle turrets, spaceship engines and tree trunks could all make efficient use of these techniques. If nothing else I hope to see folks making their own Spectrespecs or similar extravagantly decorated glasses that even Luna would think twice about wearing.

A switch in background colour is required for the second new mould introduced: SPHERE 4X4x1, W/ SINGLE KNOB in Transparent (6360033 | 79850). It’s definitely more of a decorative item than the last element. The four included in the set are used to create a nice rounded edge at the neck of each potion bottle. 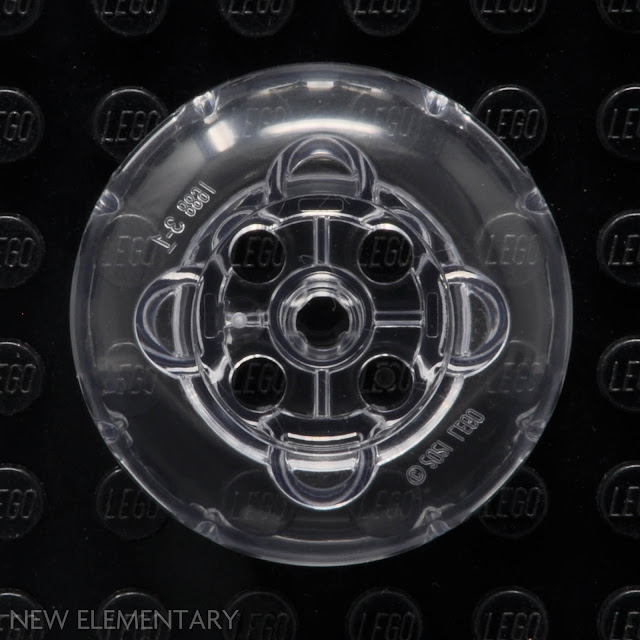 With all this glorious transparency, it's a little tricky to see what's going on here but essentially we’re looking at a 4x4x1 domed brick with a 1 plate-deep 2x2 recess at the top. Hopefully it's only a matter of time before we see this element released in an opaque colour as that will be far easier to photograph! 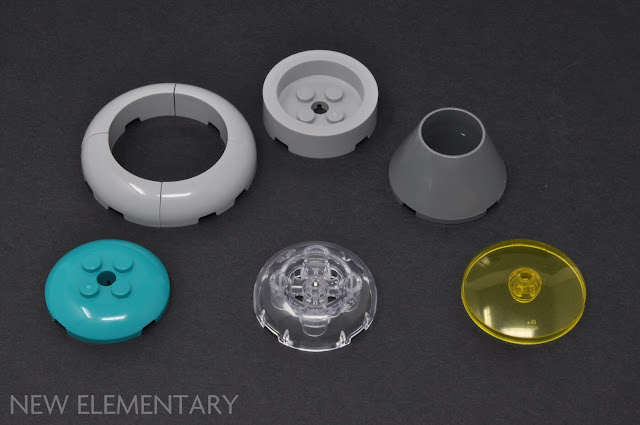 This element also has something of a family tree. Its 4x4 footprint and central recess puts me in mind of Brick Round 4x4 with Recessed Centre (68325) of minion goggles fame. Similarly, its size and dome-like appearance is reminiscent of SPHERE 4X4, W/ KNOBS (65138) used extensively on the Vidiyo Beatboxes. Unlike either of those elements though, our rounded newcomer does not feature a turntable compatible underside. 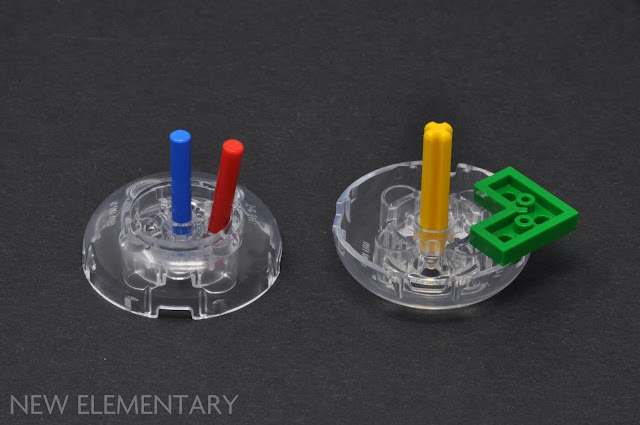 Although a large percentage of the element’s surface is dedicated to the curved edge, there is no shortage of connection points elsewhere. The top centre has a single through stud and while the four holes surrounding it look as though they too would fit 3.18 parts, alas they’re a bit too wide in diameter to hold anything securely - hence the askew red bar. As demonstrated by the top-down view above, the underside of the element naturally has anti-studs and notches in the appropriate places so it can be set directly onto a studded surface. Also included is an axle slot akin to those present on 1x1 cones (4589 & 59900).

The next group of elements are all recent additions to the parts inventory that also appear in other 2021 sets. 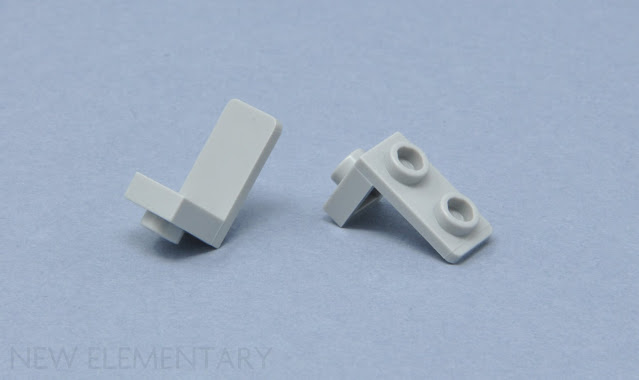 With the release of its ‘upward’ counterpart earlier this year, in hindsight it was only a matter of time before we’d be seeing PLATE 1X1, W/ 1.5 PLATE 1X2, DOWNWARDS in Medium Stone Grey (6362975 | 79389). As we’ve said previously, it’ll also be coming in 71390 Reznor Knockdown. I’m quietly ecstatic we’re getting it in such a practical colour right off the bat but I’m sure more interesting and vibrant colours will follow in time. 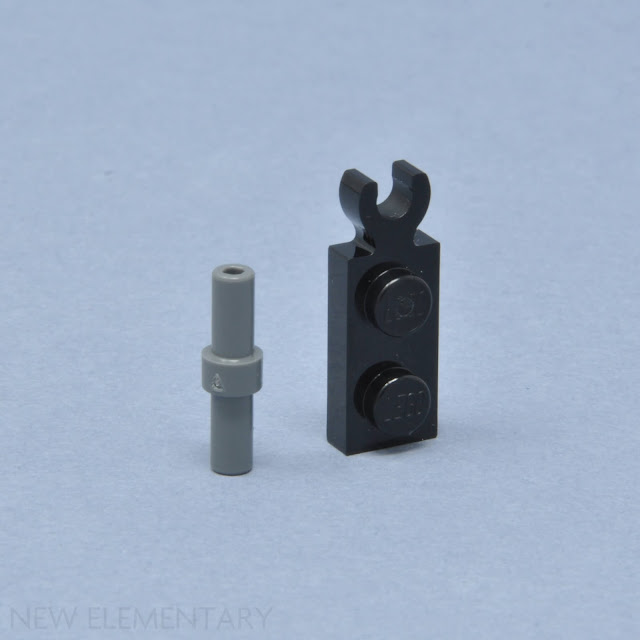 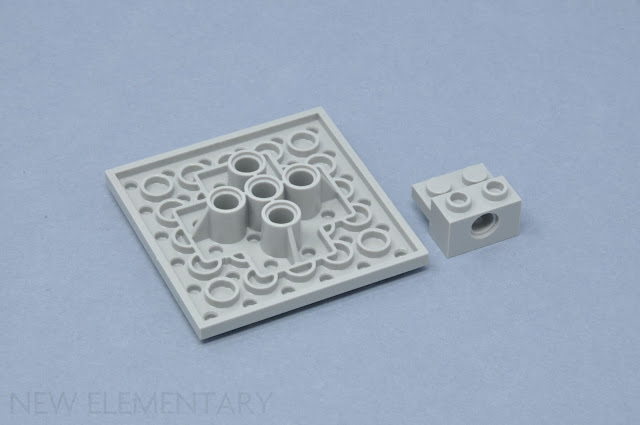 I wasn’t sure where best to place this last group of elements, ultimately I felt they were just new enough to keep them from being relegated to the realm of recolours. First spotted in Mario sets, PLATE 1X1, W/ 1.5 PLATE 1X2, UPWARDS (73825) is rapidly becoming commonplace across all LEGO themes. It appears in 76391 Hogwarts Icons Collectors Edition in three colours: 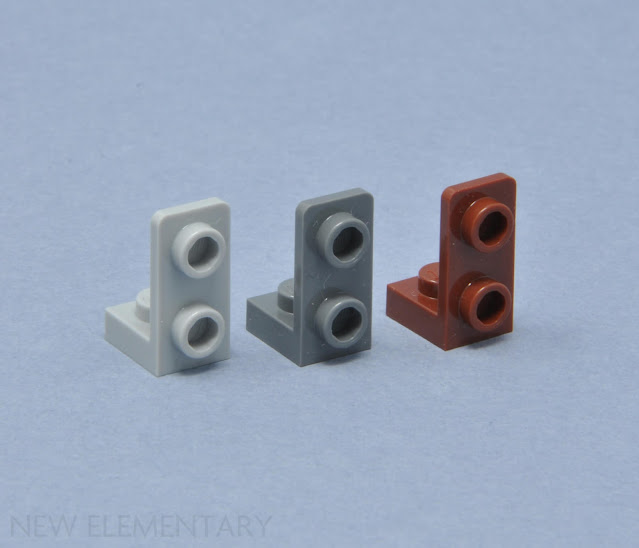 As (liquid) luck would have it, 76391 treats us to a handful of glow in the dark elements: 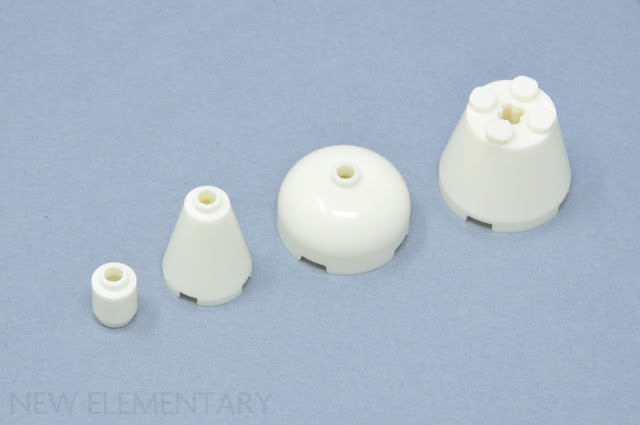 All four are used to great effect for a tiny vial of Felix Felicis or 'Liquid Luck' as it's otherwise known - but more on that in our future article on the build itself.

For now we continue on with the recolours, with a small collection of new and notable white elements: 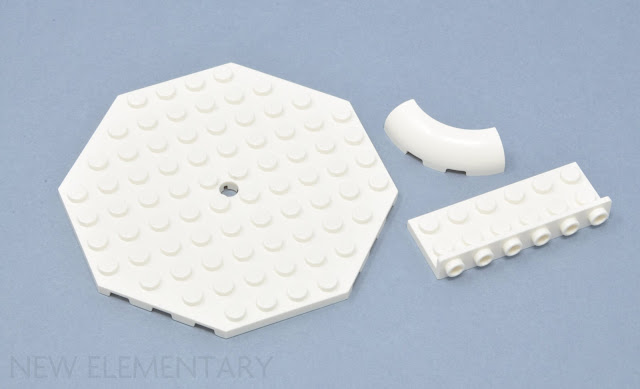 Aside from the 3 exclusive 20th anniversary golden minifigures, the set plays host to a small shower of golden elements. While I shall leave the minifigures themselves for Part 2 of our article, I figured minifig accessories are fair game to include here. 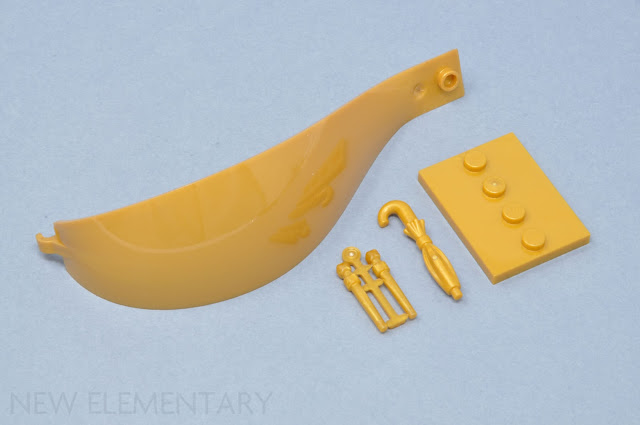 Given the ever expanding range of elements coming out in shiny metallic gold, I was initially disappointed to find these balloon segments were moulded in plain old pearl gold. I must learn not to jump to conclusions though as it turns out they're truly gratifying elements to behold.

Next up a veritable army of reddish brown elements, beginning with three recolours exclusive to 76391: 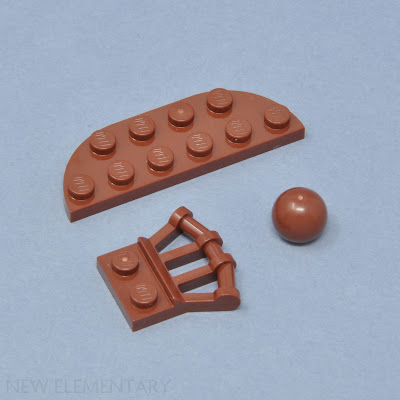 More Reddish Brown, this time parts that have only made limited appearances elsewhere: 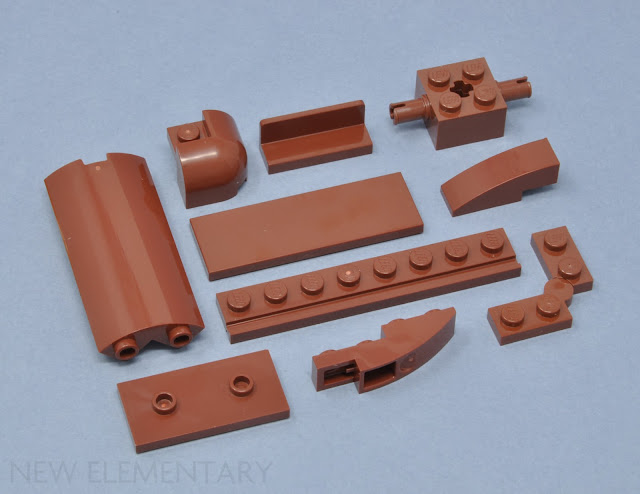 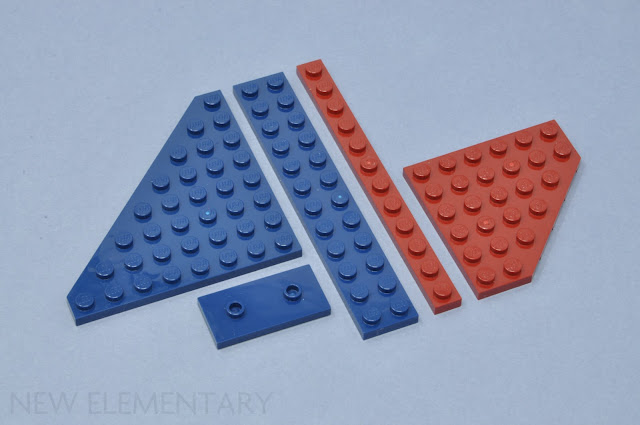 Tan (Brick Yellow) seems to be ever-present in the LEGO Harry Potter sets. Hogwarts Icons is no exception: 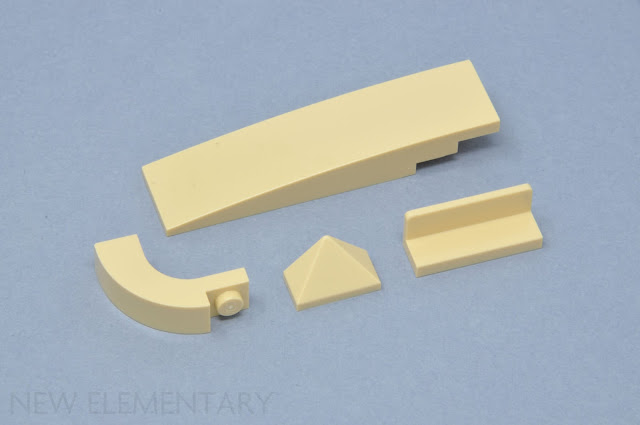 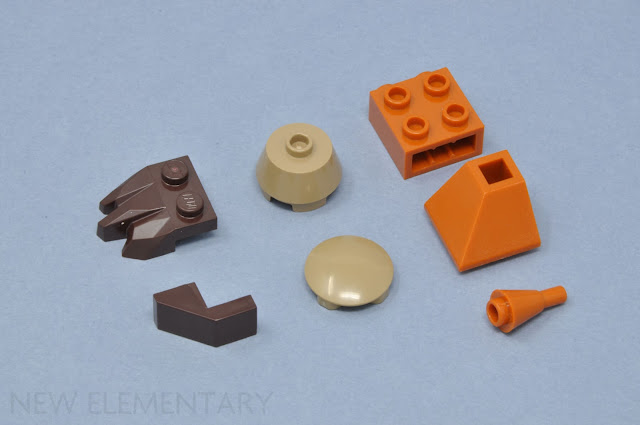 Now for some colourful odds and ends - or perhaps that should be every-flavour beans? None are unique to 76391 but all are rare or recent enough that they warrant a mention: 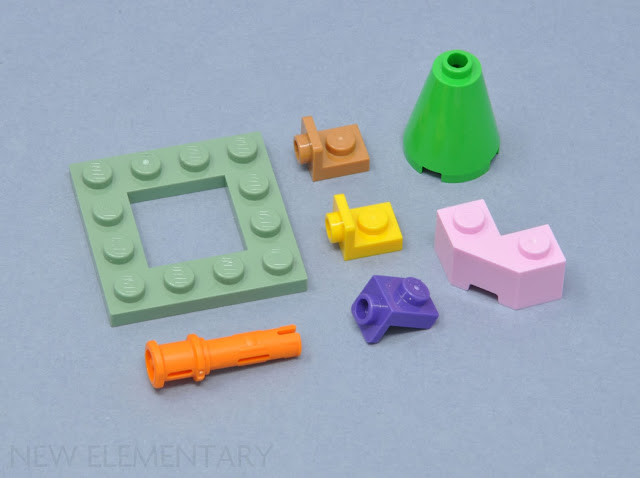 From odds and ends to an outright oddity. Whilst scouring the rear of the instruction manual for new and noteworthy parts, I spotted a duplicated Mixel joint, PLATE 1X2 W/5.9 BALL END (22890) in Dark Stone Grey with two different Element IDs: The ‘old’ version is 6123814, while the ‘new’ is 6338168. 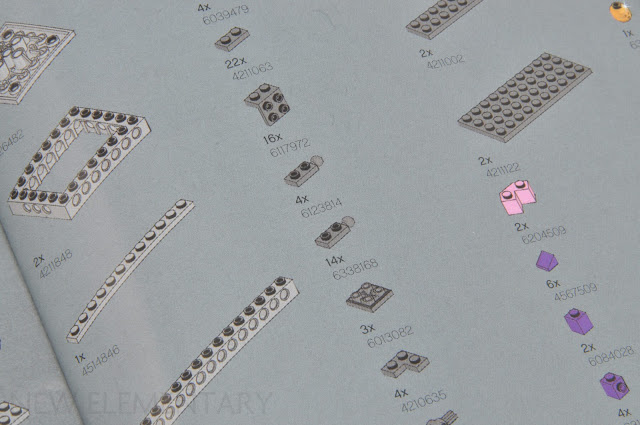 Usually this kind of thing only happens when an especially noticeable mould update is phased into use. However, I couldn't detect any differences between the total x18 included in the set so I'm leaning towards this being an error in the instructions and nothing more.

In any case, it's time we move onto the next best thing to new elements: new prints!

Despite relying on stickers for a handful of details, the set does treat us to several printed elements - all but two of which are exclusive: 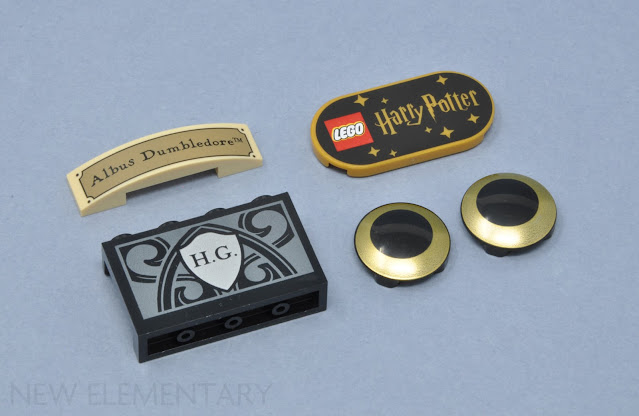 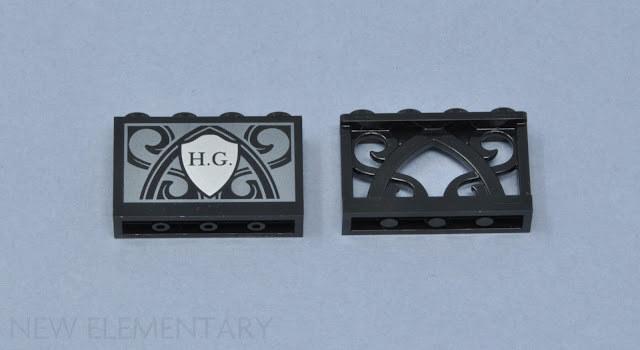 Now onto what is undoubtedly the main event so far as prints go: 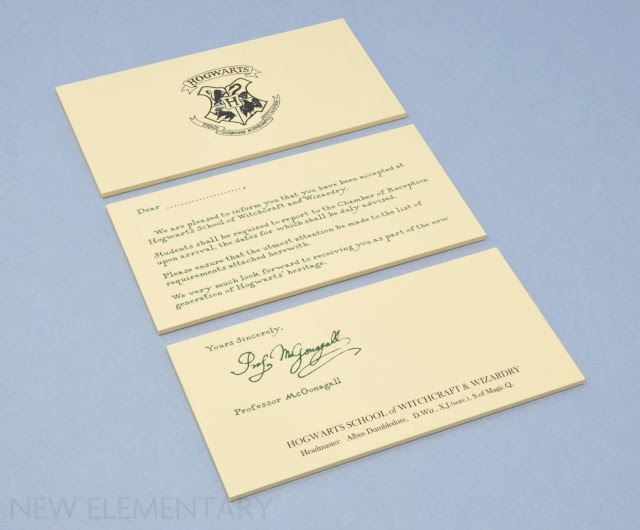 3x  8x16 Tiles in Brick Yellow each form a third of the infamous Hogwarts acceptance letter:

I’ve got thoughts about the decision to have the recipient's name blank but I’ll wait until part two of our review before getting into all that. For now I'm content in marvelling at how deluxe it feels to have all three as prints rather than stickers. 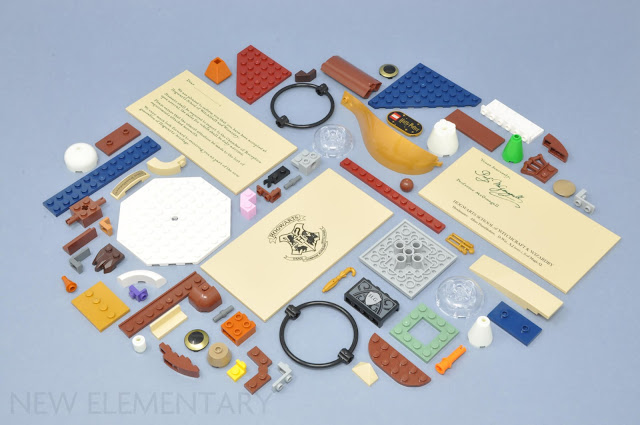 I feel it would be hard to justify purchasing this set purely as a means of acquiring elements. As the name suggests, it’s intended as a collectors display item first and foremost (not to mention with a price to match) so I’m hesitant to call this a good parts pack in the traditional sense. But focusing purely on all these recolours, sumptuous prints and fantastic new elements, 76391 Hogwarts Icons Collectors Edition really delivers. Just looking at the loose parts got me itching to start building some mocs/table scraps even before starting on the official build which is always a good sign.

Don't be alarmed though, fending off the temptation to go off-piste, I did indeed build and review the official model... which you will read about in Part 2 tomorrow! However, our Medium Azure and Vibrant Coral supporters on Patreon can enjoy Part 2 immediately.