Tom Loftus (@inthert.lego) is our final 5x5 fest contributor, and instead of one long article he divided his creations up. So, to complete this festival of MOCs using new-for-2021 parts, we have an article from Tom every day for the next four days! Be sure to check in. 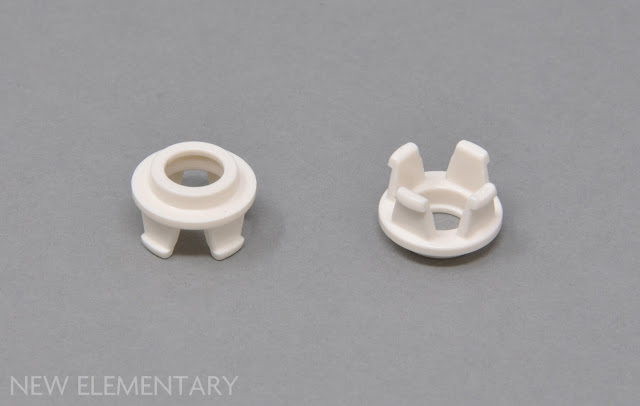 It immediately struck me as a potentially useful detailing piece. The key word being ‘potentially’ because while it does belong to an existing element family, its system connection points are extremely limited and so remains a rather specialised entry in the LEGO parts catalogue. Today I’ll be proving this little part’s worth by discussing its closest relatives, exploring some unusual connections and combining the two in a micro-MOC.

But before all that, let’s briefly cover its intended purpose in situ on a VIDIYO BeatBox - specifically 43104 Alien DJ BeatBox. 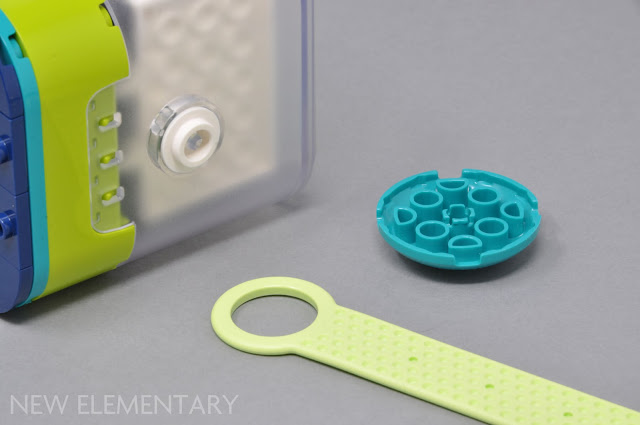 The four prongs at the base of each Turntable Snap clip into the cross-shaped apertures on either side of the transparent beatbox casing, Box Front 8X8X5 2/3 in Transparent (6317507 | 65128). They act as sturdy securing points for the flexible strap. However, as Caz noted in her thorough run-down of the Beatboxes, they are a real pain to pop out and rival the range of any LEGO projectile launcher when they do. If you value your fingertips, I’d recommend picking up some extra turntables for use in MOCs if you’ve already committed to using them on a BeatBox.

For a more in-depth look into VIDIYO BeatBoxes, check out Caz Mockett’s article.

So that’s the official use but as ever, I was determined to find some less conventional part combinations that might spark some MOC ideas.

My investigation started with trying to find existing elements it shares design features with. Unless I’m forgetting something, the 4-prong system is brand-new which leaves only its turntable mount up top. 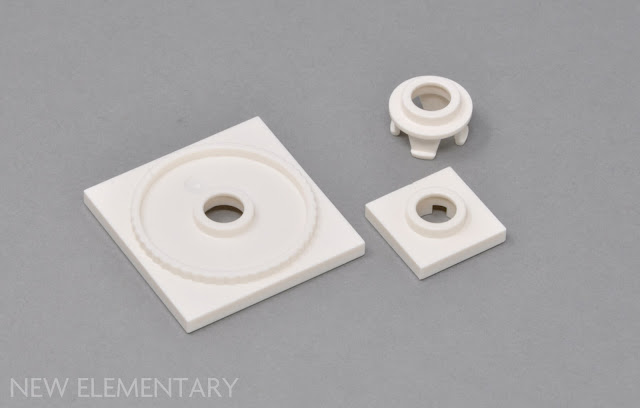 To my knowledge only two other parts have that particular feature: Bottom W. Turntable 4x4 (61485) and Turntable 2x2, Female (27448) - neither of which were particularly helpful in generating build ideas. Though evidently, I was too quick to disregard them as we’ll discover later.

For now, it’s time for my favourite stage: seeing what random parts you can jam it into – still need to find a better title for that. Since the element itself is round, it seemed likely that circular parts would be good candidates for unusual connections. 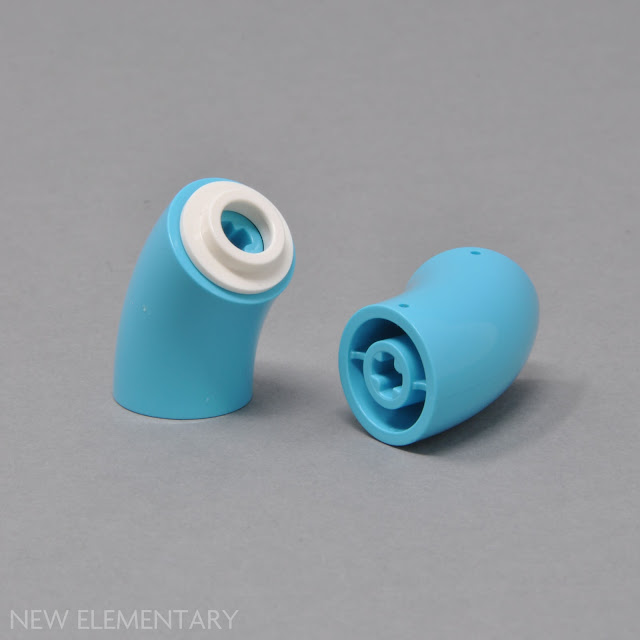 As luck would have it one such circular part was close to hand, Design Element, Deg.135,W/ Crosshole in Medium Azure (6322807 | 65473) appearing in 43184 Raya and Sisu Dragon – also a set of honour in our current parts festival. The Turntable Snap’s prongs slip snugly into the available vacant space around the tube’s axle hole. It’s a rather satisfying connection though not especially sturdy.

Itching to find other nifty part combinations, I dug out my box of wheels and began the ‘seeing what random parts you can jam it into’ ritual anew. 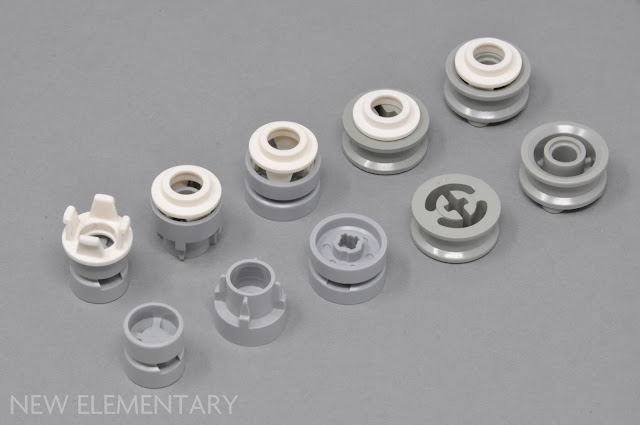 Results were mixed but eventually I stumbled across several interesting parings, all of which don’t stray too far from a 2x2 stud footprint. Initially I was only focused on connections involving the four prongs but realising I was neglecting the turntable hub; I began experimenting with it too. I’m glad I did because my favourite connection of the bunch sees the Turntable Snap inserted upside-down into a small wheel hub, 4x Rim Wide W. Hole Ø11 (6014). 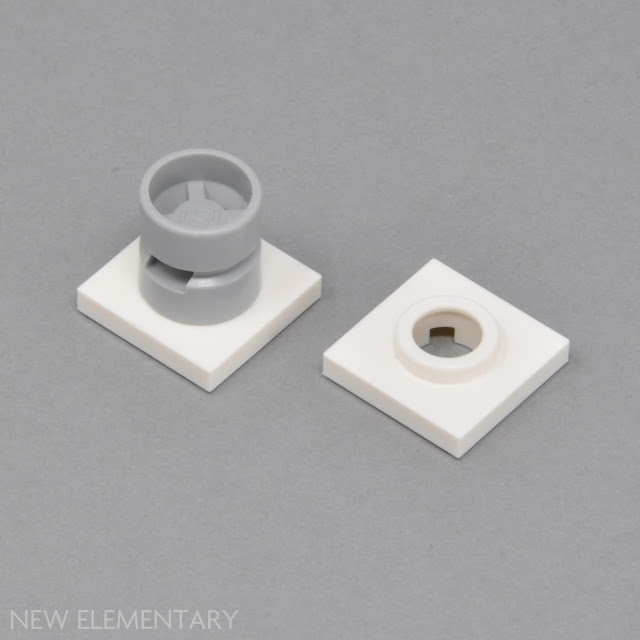 Of course, this also means the aforementioned 2x2 turntable base (27448) and indeed the 4x4 (61485) can also connect to the wheel. This leads me to believe I can’t be the first to notice these parts can be combined this way. Especially considering the 4x4 variant has been around since 2008 and the wheel hub longer ago than that.

Even so, the shape of the upturned wheel and Turntable Snap stack (try saying that ten times faster!) immediately put me in mind of a castle turret. 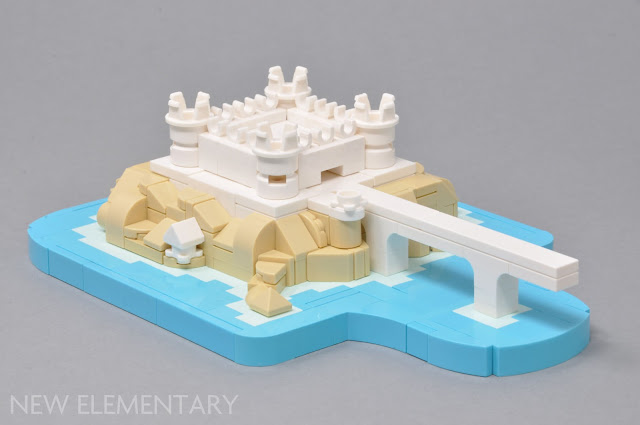 …So a castle I made! Well, it’s more of a sea fort really. Complete with crenelations, entrance bridge and a teeny tiny boat house. 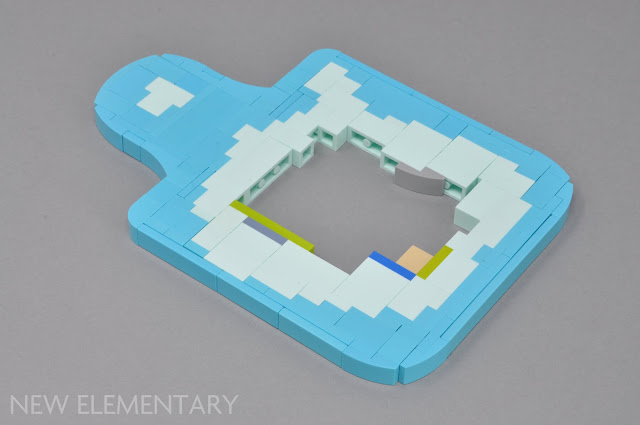 Once again, 43184 Raya and Sisu Dragon came in handy with its supply of medium azure elements. Specifically a pair of the new inverted Slopes, Brick 1x3, Outside Half Arch, W/ Cutout In Medium Azure (6320292 | 70681) which I integrated to round off the extended water section. I also choose to follow Sisu’s colour scheme with the Light Aqua representing the shallows. 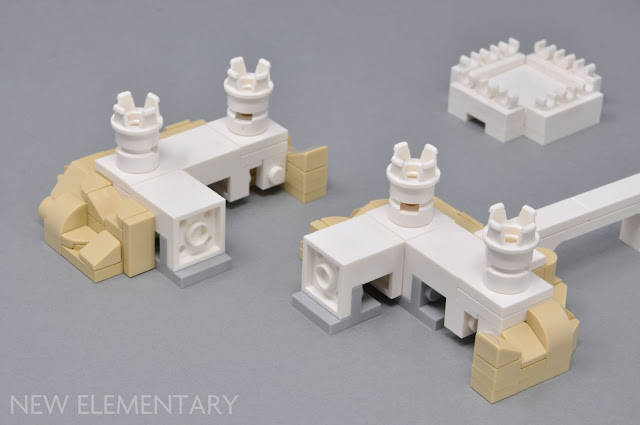 It wasn’t all plain sailing though; those pesky turrets may look the part but they played havoc with my hopes of sticking to traditional LEGO geometry for the foundations and surrounding cliffs. I suppose such challenges should be expected when the impetus for a build is off-grid.

To close out this article, I’ll leave you with some odds and ends - Ideas that didn’t quite compel me to build MOCs around but I feel are worth sharing nonetheless. 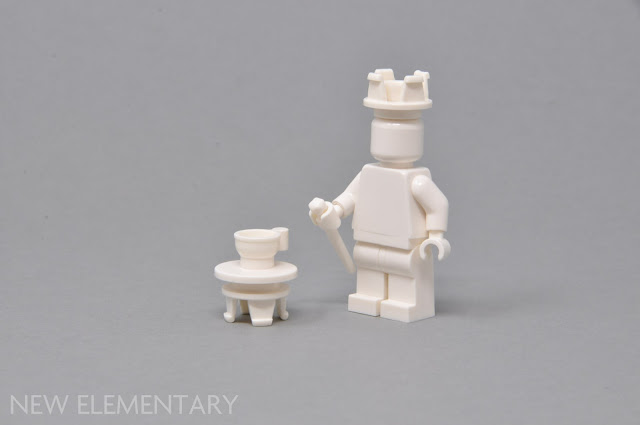 Well would you look at that? I turned the Turntable snap into an upturned turntable hat!

READ MORE: Next, Tom turns his attention to the actual Vidiyo canopy piece itself

Posted by: Admin Posted on 8/27/2021 04:17:00 am
Email ThisBlogThis!Share to TwitterShare to FacebookShare to Pinterest
Labels: MOC, Parts Festivals, Technique, Vidiyo