The eyes have it! In his third and final examination of interesting LEGO® pieces introduced for the 1998 Space theme Insectoids, Duncan Lindbo (donutsftw) takes a 'look' at two parts comprising the aliens' eyes, and builds original creations of his own using them. 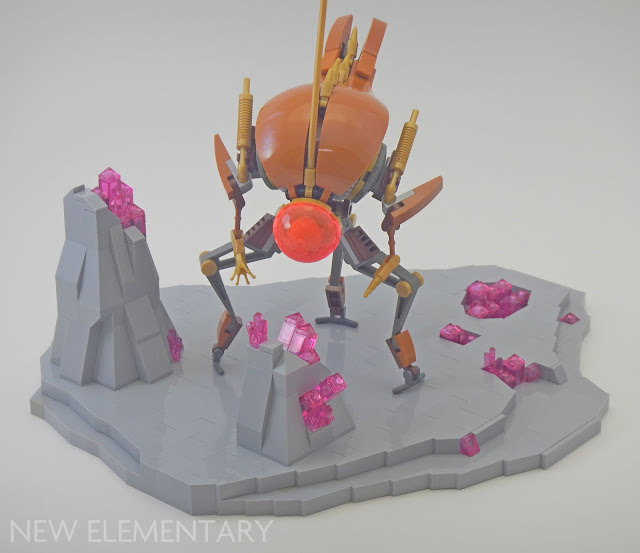 Today, we’re journeying back once again to the days of the late 1990s to cast our gaze upon some old LEGO® Insectoids parts. But these parts can gaze back! That’s because we’re looking at Cylinder Hemisphere 4x4 Multifaceted (30208) and Plate, Modified 1x2 with 4x4 Dish at 90° (30209), a pair of parts which were first introduced as ‘eyes’ in the Insectoids line.

As its name states, part 30208 is a dome four modules in diameter with a sort of geodesic dome texture, meant to represent the multiple lenses of insect eyes; hence the official TLG name of Insect Eye Ø 31,84. 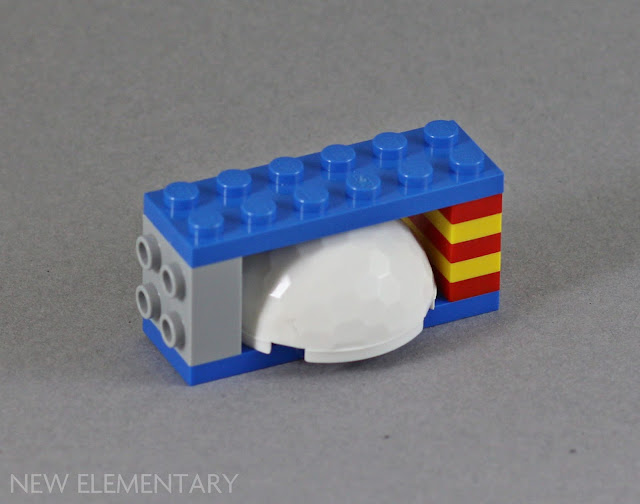 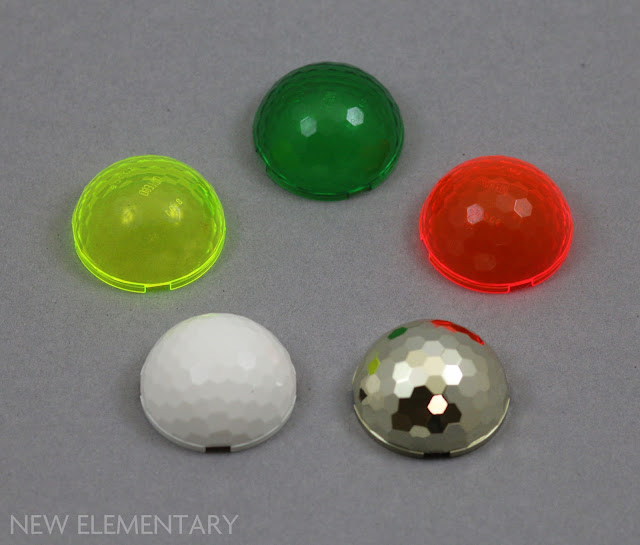 Initially, these appeared in Transparent Green/ Trans-Green and Transparent Fluorescent Green/ Trans-Neon Green across 9 Insectoids sets in 1998, followed in 1999 by White, Metalized Gold/ Chrome Gold and Transparent Fluorescent Reddish Orange/ Trans-Neon Orange across 7 sets from Star Wars, Town ‘Space Port’ and Mindstorms. From 2000 to 2009 they only appeared in a further 15 sets but in further new colours, not pictured: Chrome Blue, Sand Blue and both Grey/ Light Gray and Medium Stone Grey/ Light Bluish Gray. The latter is due to the only set they appeared in, the original UCS 10030 Imperial Star Destroyer, being produced right at the time of the switch between these two colours). The chrome versions actually have a different Design ID (71967) due to the fact that chromed elements use moulds that are minutely thinner than the normal variant in order to account for the extra thickness added by the chroming process. Sites like BrickLink consider these parts identical, however. 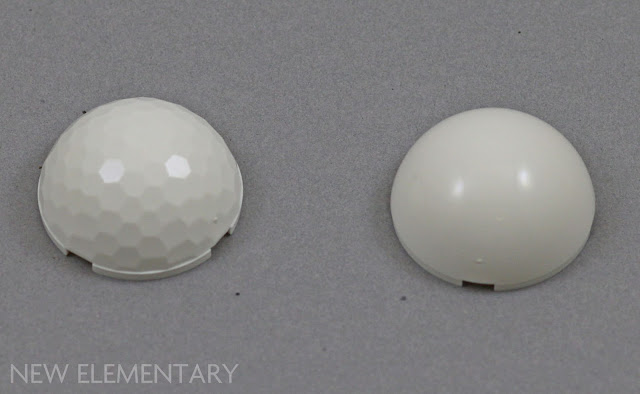 Unlike the other Insectoids parts we’ve looked at in past articles, part 30208 has a modern counterpart: Cylinder Hemisphere 4x4 (35319, 35320, 86500). Introduced in the same year that the Insect Eye was deleted, 2009, its dimensions are identical but is just a completely smooth dome instead, with a TLG name to match: Dome Ø32. Although this name suggests the insect eye version has a different diameter - 31.84mm - this may simply be a case of rounding off decimal points; either way the difference is purely cosmetic and it’s easy to see why LEGO made the switch since the smooth surface of part 35319 is generally more versatile for building.

Still, the geodesic patterning of 30208 provides some nice sci-fi texturing, especially at microscale, like in this micro Mars base. 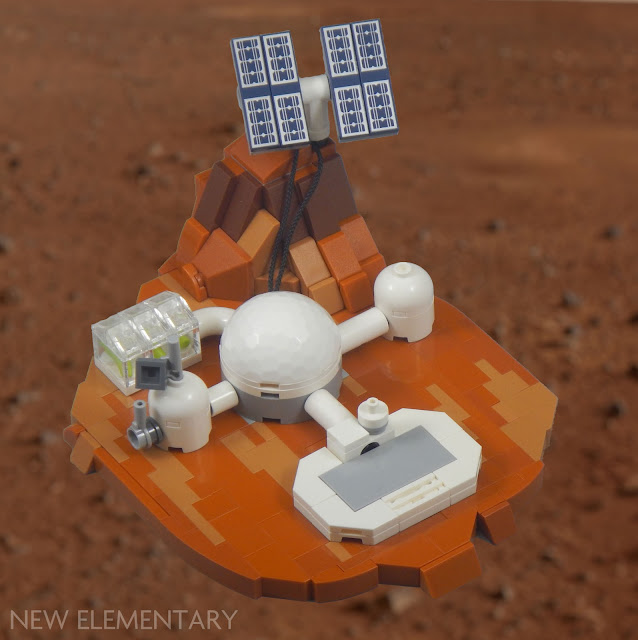 There’s really no crazy techniques at use here, although I did take advantage of the cutouts for studs along the base of the dome, that allow this part to sit on larger plates, to pass the ends of the string through in order to give the impression that the ‘wires’ from the solar panels actually feed into the base. 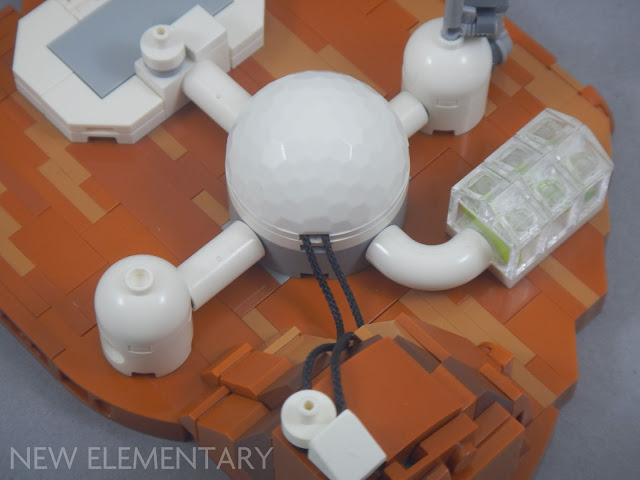 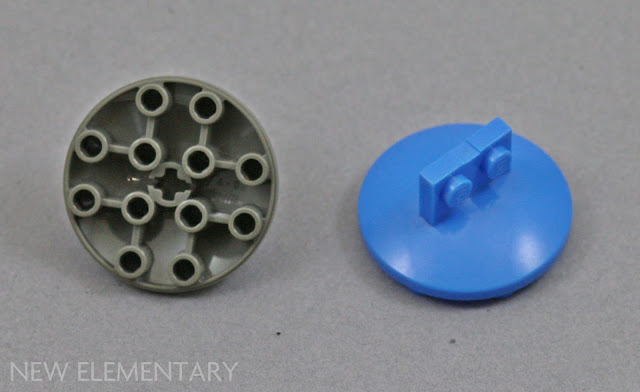 Although it was not replaced, nowadays it kind of reminds me of Bracket 2x2 - 1x2 centered, aka the ‘Minecraft foot’ plate (41682), since both are 1x2 plates with larger sideways attachments to facilitate SNOT building. 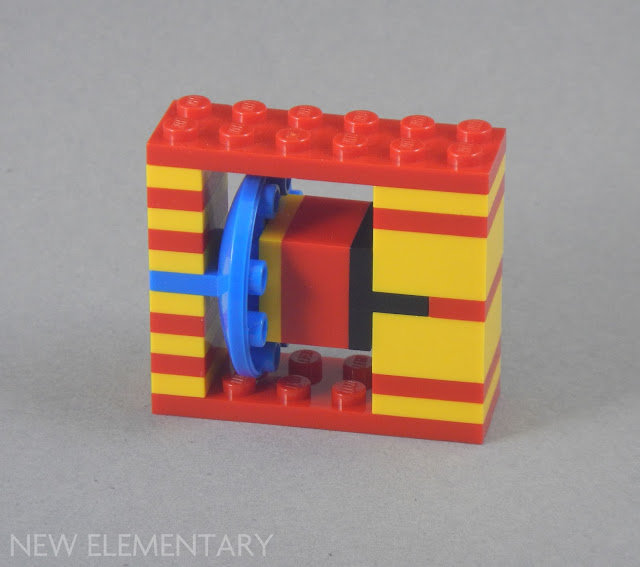 So naturally I tried to see if it was possible to pair the two in a way that was “in System”, and was pleased to find that there was. (Shown in Black above.) 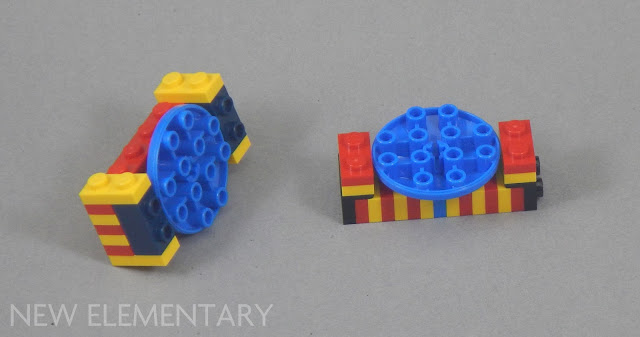 The dish on 30209 is exactly one module deep, not counting the hollow studs on the surface, and the 1x2 plate on the back is at the centre, so there are a number of ways to build additional SNOT connections around it so that everything lines up nicely. 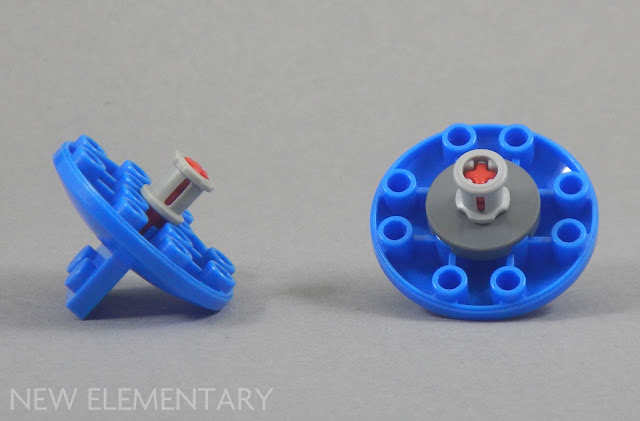 Additionally, there’s a space for a Technic axle in the center of the dish. Due to the curved nature of  the dish, this hole is almost but not quite 1 module deep. 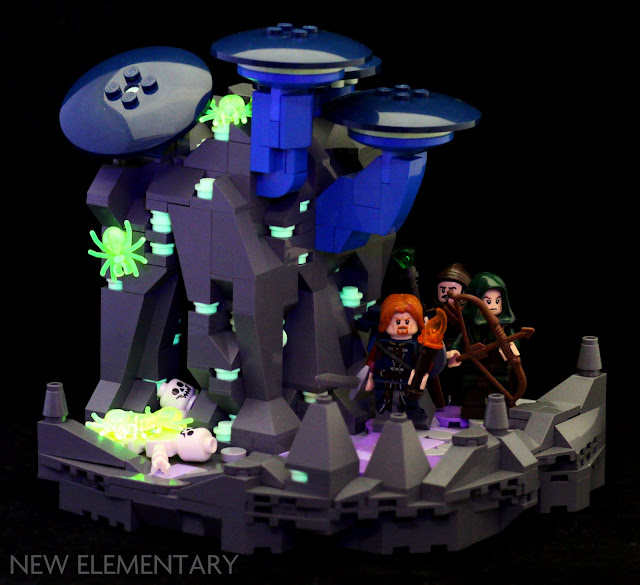 To me, it’s understandable why part 30209 was discontinued. It provides an interesting shape, especially for organic builds like these mushrooms, but much of what it does could be achieved with other more, generic parts. 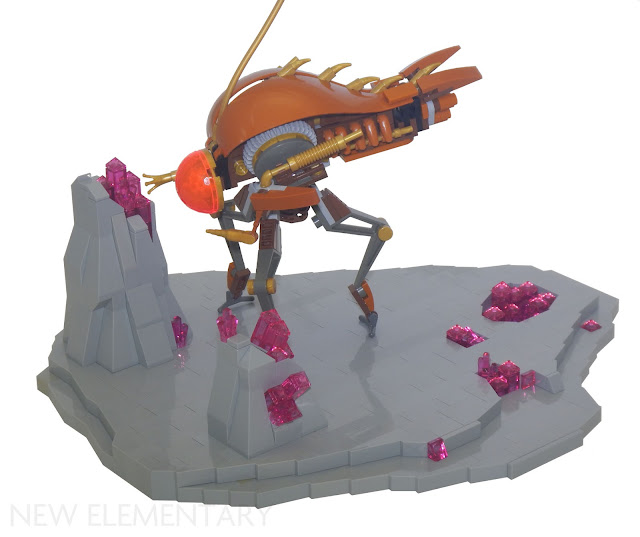 I used them as the basis for the arm mounts on this vaguely steampunky alien robot and, while I like how it came out, it also illustrates this point quite well, since a 4x4 plate and dish could have likely been used to achieve a similar final result.

Are you sick of looking at bug bits? Not to worry, next time I promise we’ll cover something really cool!

READ MORE: Duncan's other Insectoids articles examine the wings and the legs

All text and images are © New Elementary unless otherwise attributed.
Posted by: Admin Posted on 9/05/2020 01:10:00 pm
Email ThisBlogThis!Share to TwitterShare to FacebookShare to Pinterest
Labels: MOC, Old parts, Space, Technique