Today we greet another new contributor:  Lee (city son on Flickr) who hails from Hong Kong. We sent Lee a copy of LEGO® Iconic 40424 Winter Snowball Fight to review, plus he also designed several creations of his own using only the parts in this small set. The products in this article were provided for free by LEGO; the author's opinions are not biased by this.

The LEGO Group has put out quite a lot of seasonal vignettes over the years, and they rarely disappoint me. With a low price point, a lovely model and a great selection of parts, 40424 Winter Snowball Fight easily won me over once again. Let’s take a look at what you can get out of this US$12.99/ CA$16.99 set 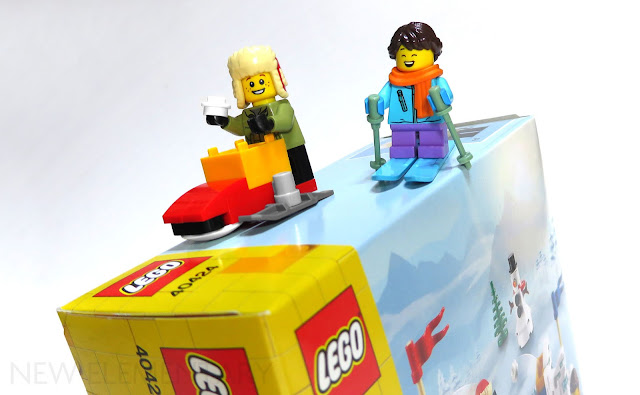 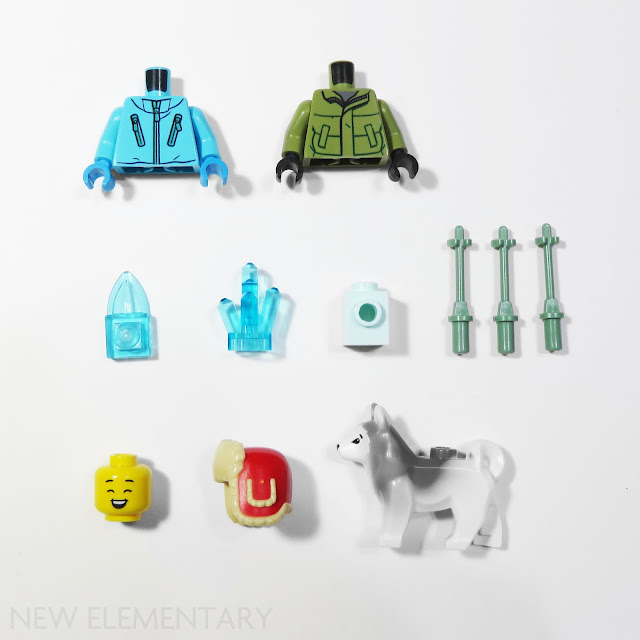 I was genuinely surprised and glad to find out that both minifigure torsos are exclusive to this set currently, as it is always nice to get some new generic torsos. And even though there aren’t any exclusive parts apart from the torsos, there are still a number of relatively rare parts that I find worth noting:


And for those who are into collecting minifigures and accessories: 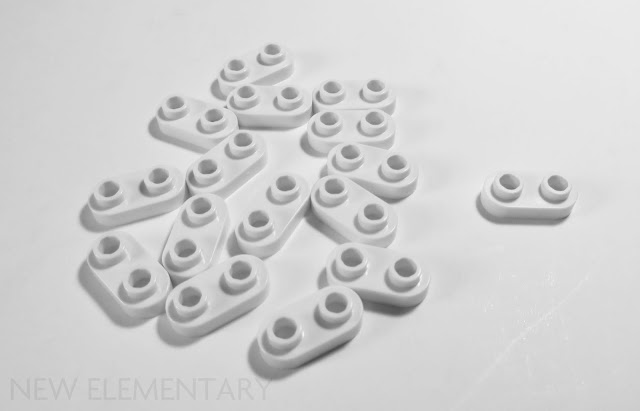 A common personal nitpick I have for the seasonal vignettes is that they often come off as a bit “samey”, particularly the winter ones. That is by no means a criticism towards the design, it is just an inherent limitation of the theme. In the case of this set, I think the designer behind it deserves some praise for bringing in the story element of a snowball fight, something that I don’t think I have ever seen in other winter vignettes. 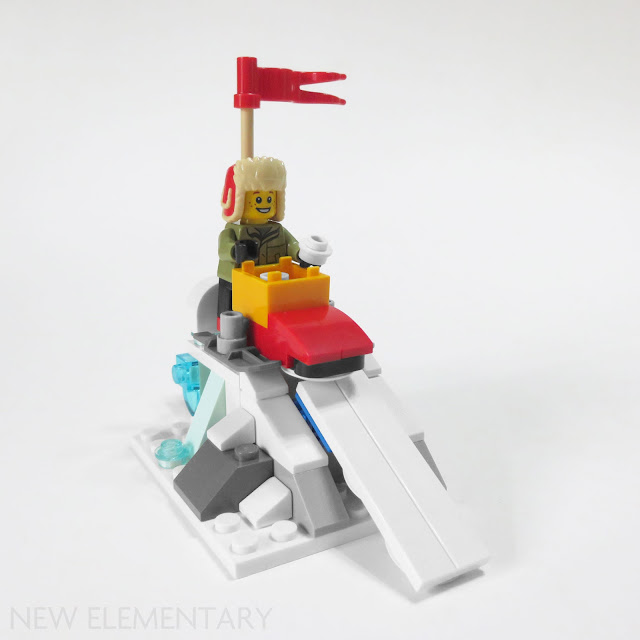 Simple features like this sledge ramp and the snow catapult (below) make this an actual playset so that kids (or even adults) can participate in the fight, and given the size of this set, that is quite impressive! 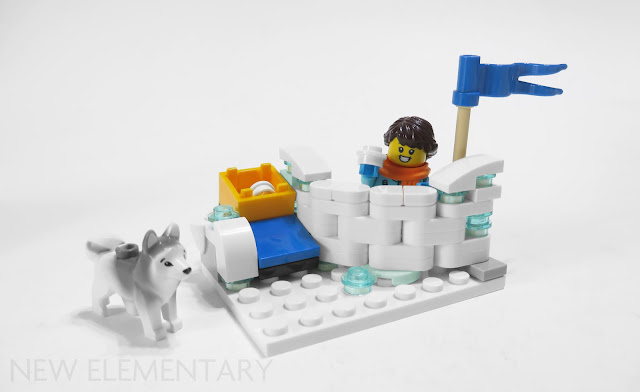 Construction-wise there isn’t anything too fancy, but the curved snow fort created with all the 1x2 rounded plates is quite satisfying to put together, and it is certainly another refreshing idea in a winter set. 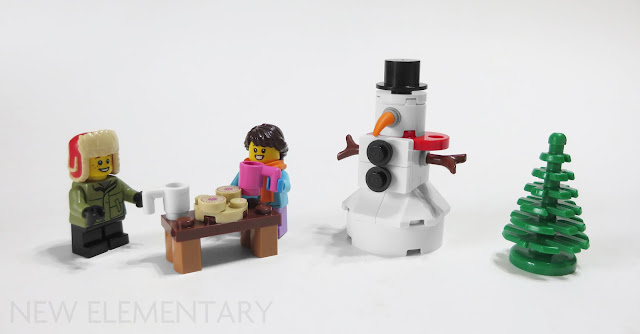 The accessories are typical of what a LEGO winter vignette would include, but they certainly enrich the scene when displayed together. I think the snowman build is also one of the better ones among the countless variations over the years.

It doesn’t have to be a snowman…

As a MOC builder myself, the most exciting part about these smaller sets is making alternative models! Given that it has so many interesting parts to play around with, I must confess that this set caught me off-guard a little with how challenging it proved to come up with alternative models.. There are very few parts providing connections at an angle (e.g. clips, SNOT bricks etc.) and just to make things worse, many of the elements appear in odd numbers. Now I will go through my 5 alternative models, briefly describing some interesting connections the limited parts forced me to come up with. 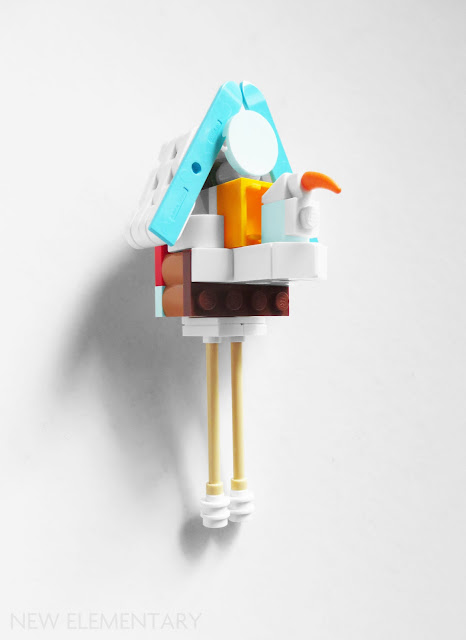 The first thing that came to my head was to do something interesting with the Medium Azure skis (6170544 | 90509), and that soon developed into the idea of a cuckoo clock. An interesting quality of the ski piece is that it only has a stud on top, with a flat bottom. To reverse the building direction, I used the combination of a 1x2 jumper plate (15573) and a 2X2 coupling plate (3176). 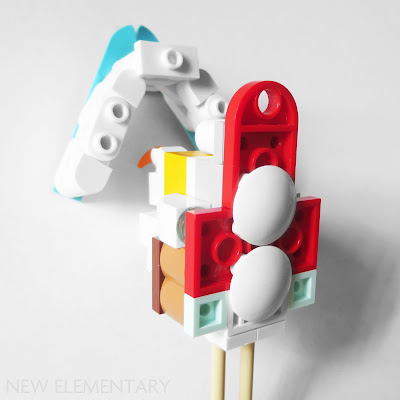 You can also see how I utilized the 1x2 rounded plates to shape the rest of the roof. 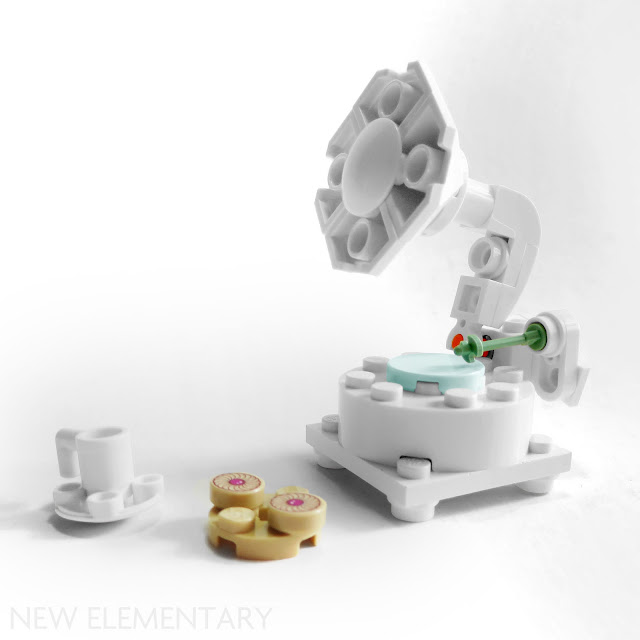 I thought of making a phonograph when I spotted my half-destroyed snowman during the initial disassembly but the problem was how to create the tilt for the horn of the phonograph. 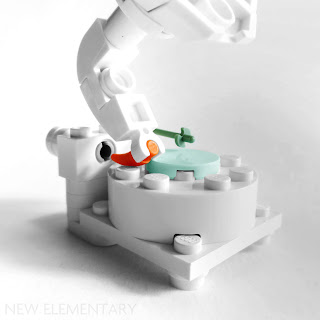 I eventually came up with a connection with the horn piece (53451) and a Technic pin (4274). The strength of this connection is definitely not up to the official standards but it is sufficient to hold the horn even if I flip the model around or gently shake it. 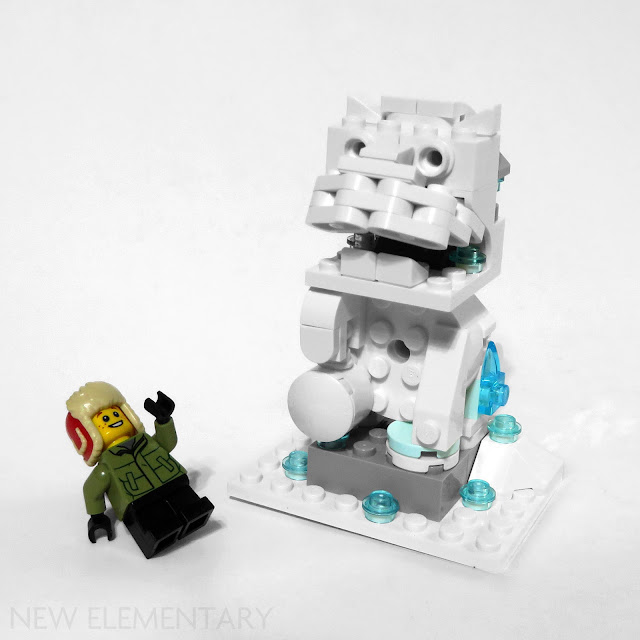 This one took me the longest to figure out, but perhaps it is also the most interesting one? 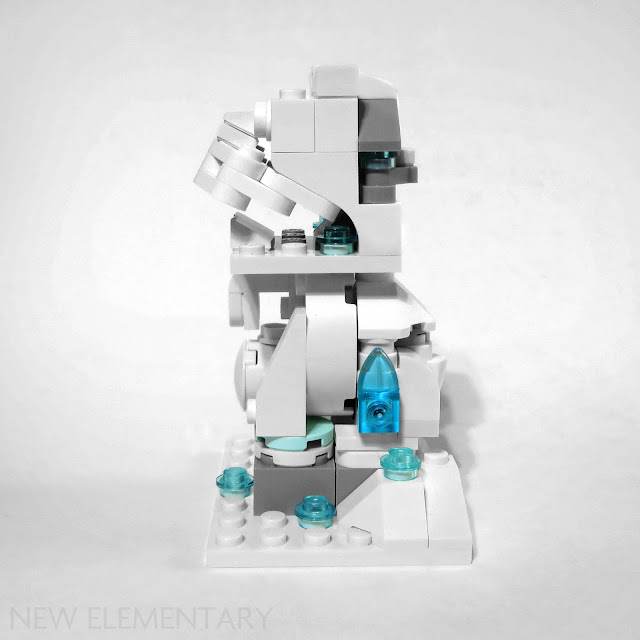 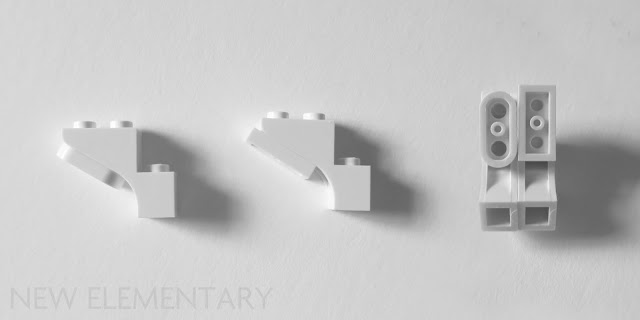 Here I discovered a slight difference between the use of a regular 1x2 plate and a 1x2 rounded plate for this connection. I personally haven’t thought of any particular use of this information but I will leave it here for other builders to discover some brilliant application of it. 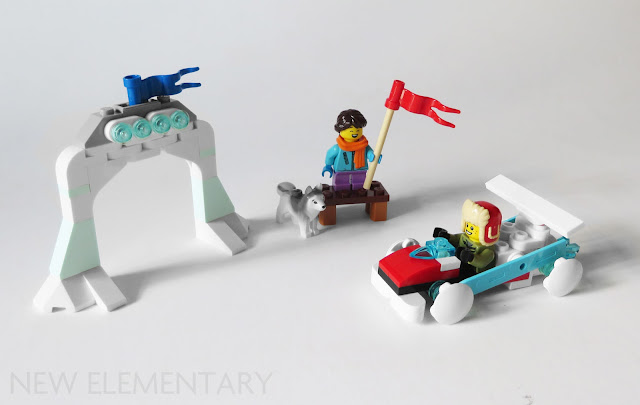 I built this one in honour of the lesson taught in the first LEGO Movie: you can build a car even if you “don’t see anything that looks like a wheel… or three other wheels”! 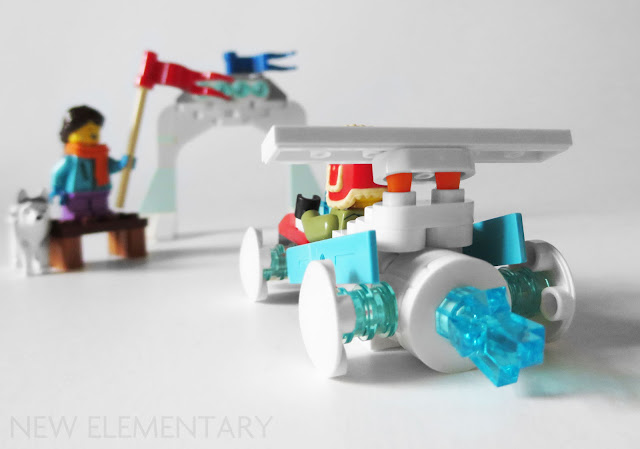 At the back of the kart you see another example of the horn connection. I have also used the crystal piece as some sort of energy blast. 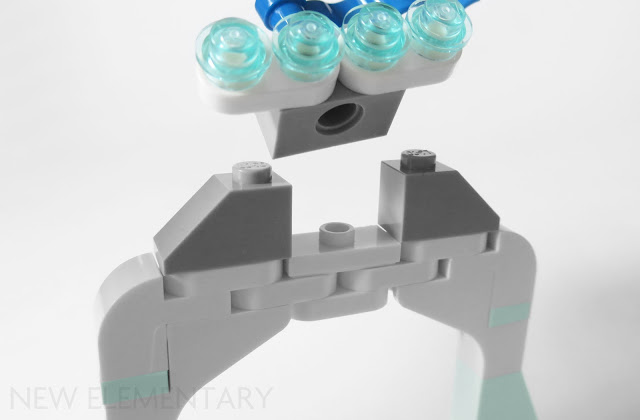 This may not be a particularly new technique, but I would also like to point out that the combination of jumpers and Technic bricks can always be an alternative for building sideways when you’re lacking a SNOT brick. 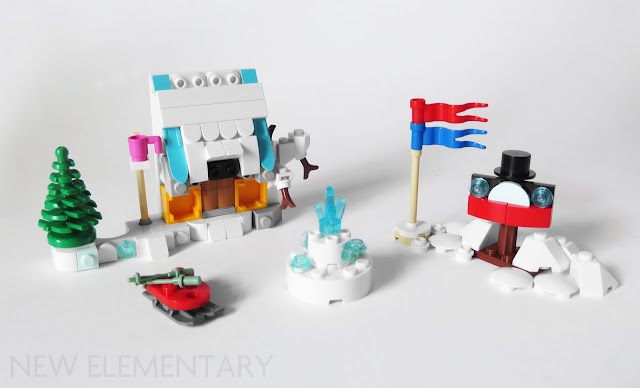 To wrap up the challenge, I wanted to create a microscale house to show the diversity in what can be made with the pieces. The biggest struggle is that there weren’t enough bricks to build up the height, so instead I built the entire café sideways. 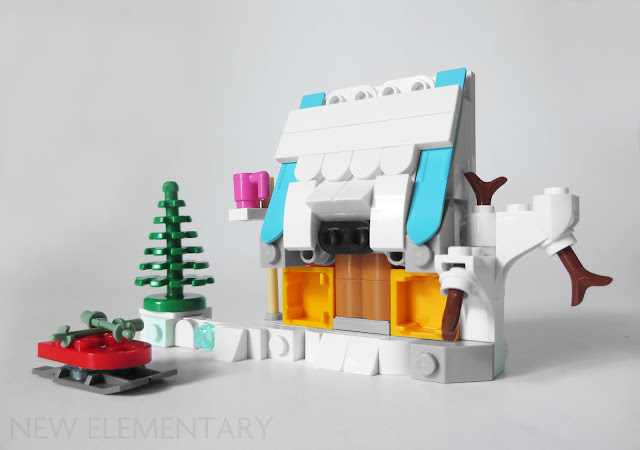 The Flame Yellowish Orange/ Bright Light Orange box pieces (6279767 | 35700) are used as windows, and the trick with the arch bricks is used again, to create branches for the snow-covered tree on the side. I also made a snow-kart, a fountain and a town entrance sign to complete the scene with the remaining pieces. 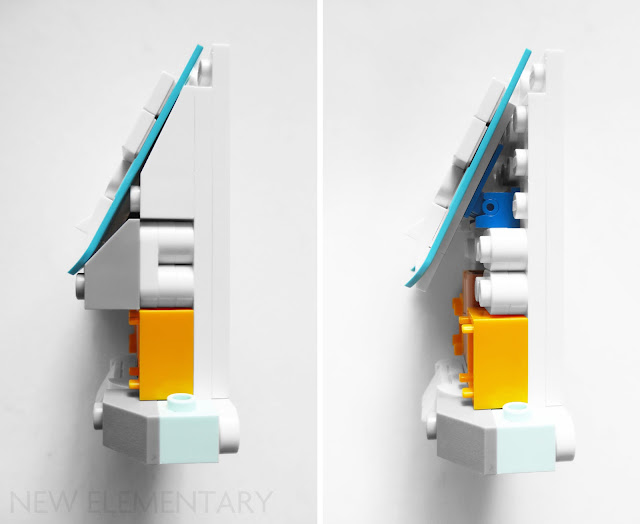 Here’s an inside look at the roof structure. While it was done with a simple hinge, I find the way the ski piece fits the gap to be quite satisfying.

I thoroughly enjoyed this lovely winter vignette set. Not only does it offer a great selection of parts, the model itself is also highly playable with some refreshing ideas. I also encourage any builder who is into making alternative models to pick this up and give it a go. It is a well-designed and rather affordable set to begin with, so why not?

READ MORE: See a list of all the new LEGO® pieces for September 2020

All text and images are © New Elementary unless otherwise attributed.
Posted by: Admin Posted on 9/20/2020 11:34:00 am
Email ThisBlogThis!Share to TwitterShare to FacebookShare to Pinterest
Labels: Alternate build, MOC, Set review